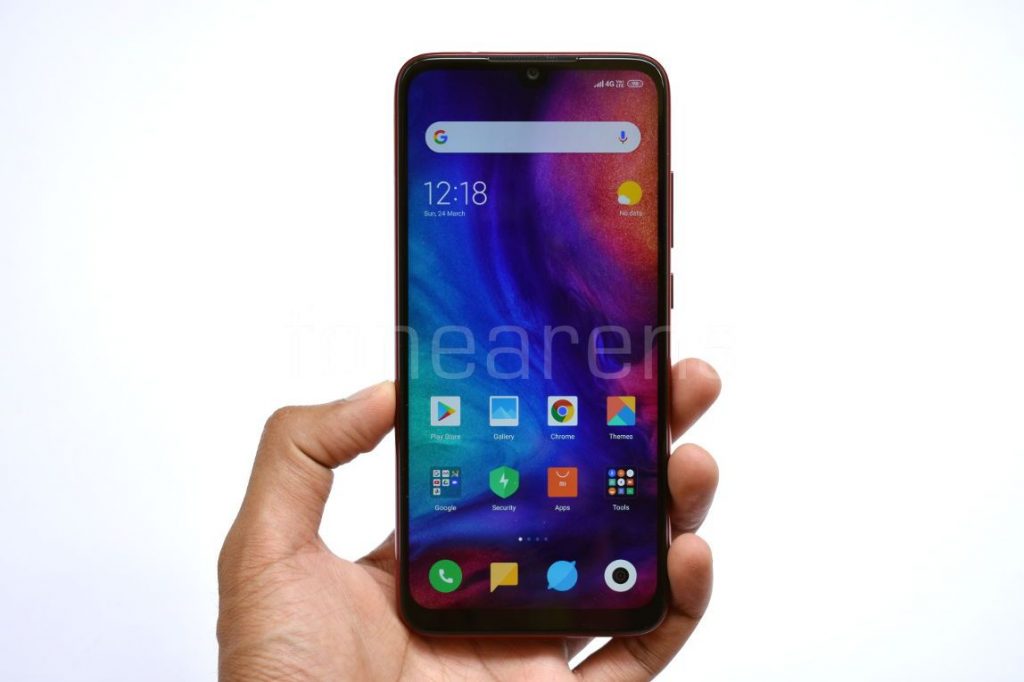 Xiaomi introduced Pro version of Redmi Note for the first time in India last year along with Redmi Note 5, but Redmi Note 5 was not a significant upgrade from Redmi Note 4 and hence Redmi Note 5 Pro became a preferred choice amongst consumers. The company didn’t even bother to launch Redmi Note 6, instead, it launched Redmi Note 6 Pro without launching regular Redmi Note 6 back in November.

Last month, Xiaomi introduced Redmi Note 7 and Redmi Note 7 Pro in India and Redmi Note (not the Pro variant) is making a comeback, but does it bring enough to the table to make you consider buying it as your next phone? Let us dive into the review to find out. 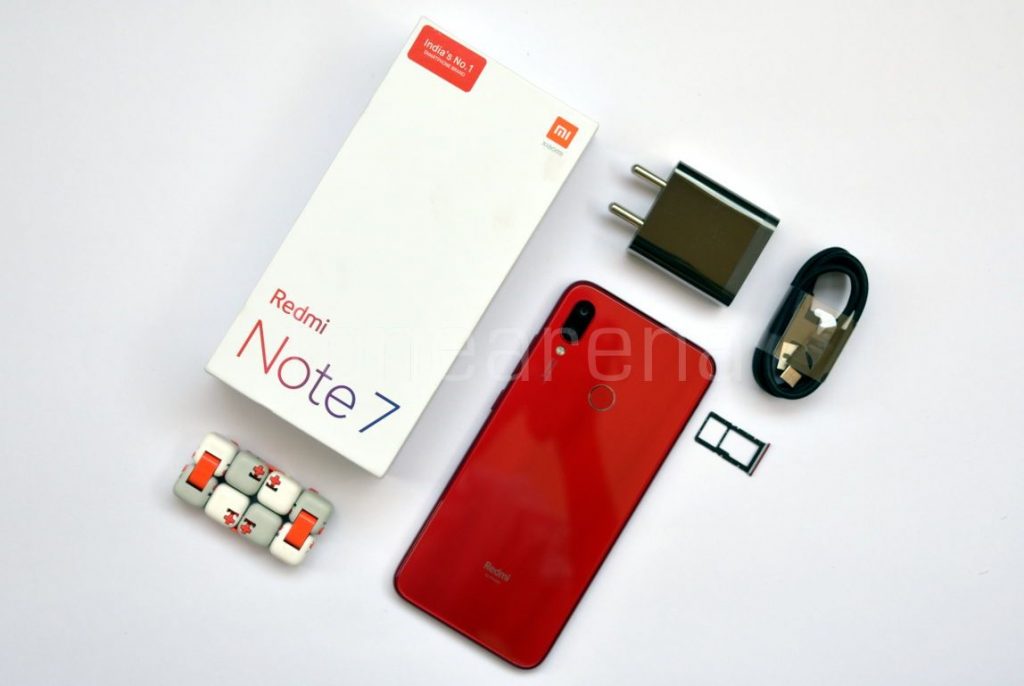 We recently unboxed the smartphone, check out the unboxing and first impressions. 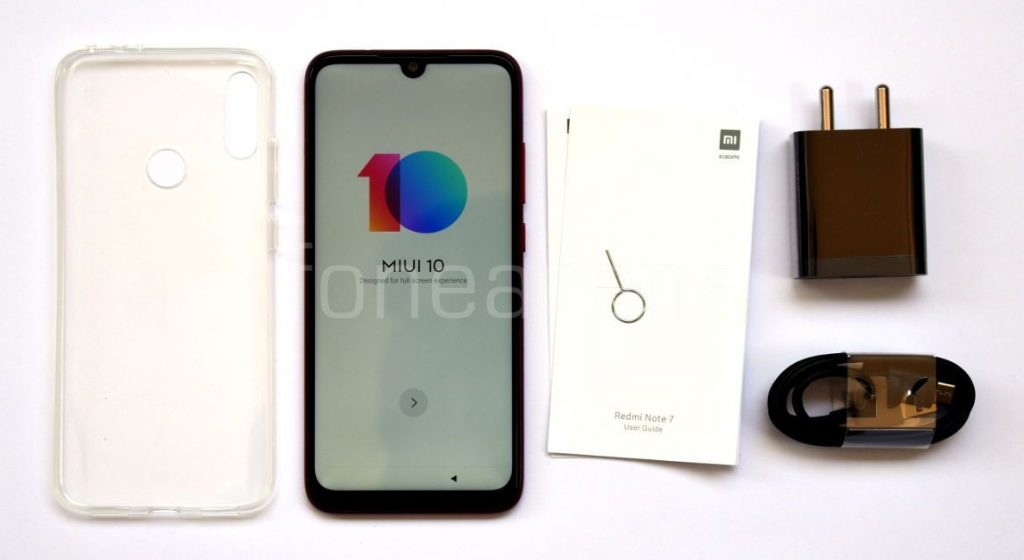 Since the Redmi Note 3, Xiaomi has been sticking to the metal design on Redmi Note series of devices. With every Redmi Note iteration, Xiaomi focused on making the design more refined rather than trying something new. With the Redmi Note 7, Xiaomi has introduced a glass sandwich with Aura design making it look entirely different from the previous generation Redmi Note devices, and the Ruby Red variant that we have is surely an eye-catcher. 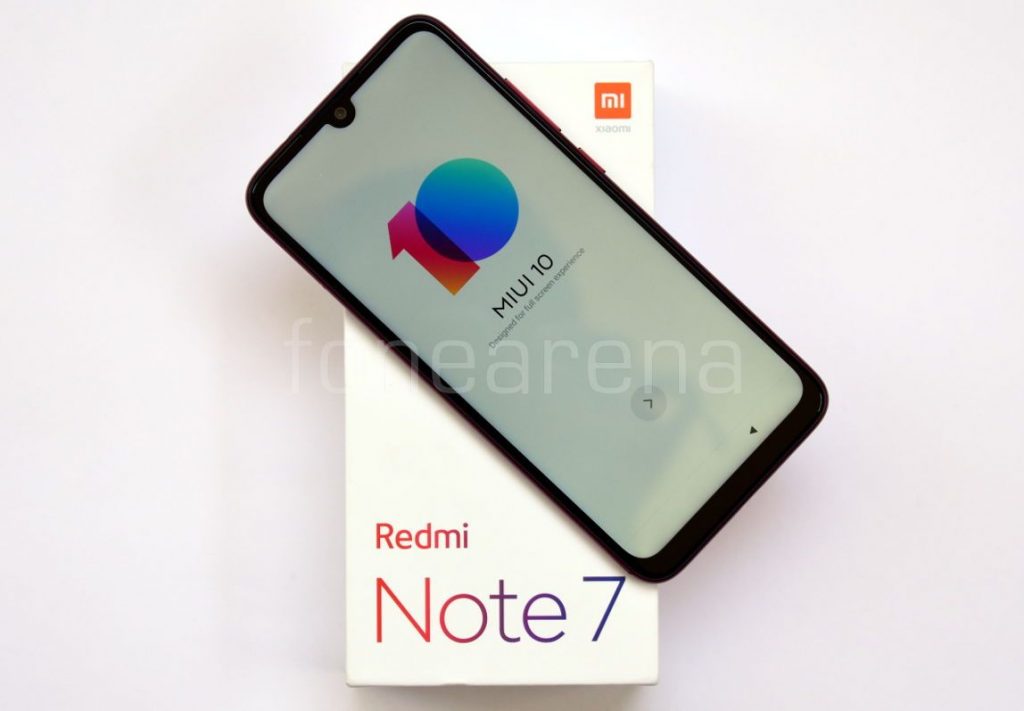 The Redmi Note 7 features a modern bezel-less dot-notch display with a 19.5:9 aspect ratio protected under Corning Gorilla Glass 5 protection. Even though the phone has a large screen, it is compact to hold and can be managed with a single hand if you have big palms. It has about 81% screen-to-body ratio, similar to the Redmi Note7 Pro. 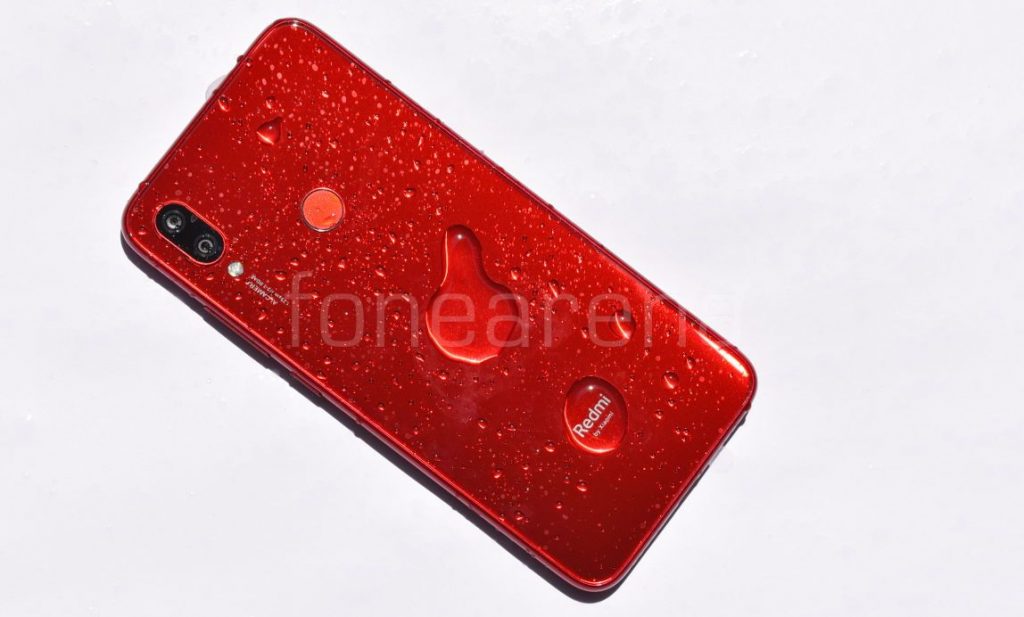 The phone has P2i nano-coating making it splash proof and it can also withstand light rain, but can’t be immersed in water since it lacks IP rating. 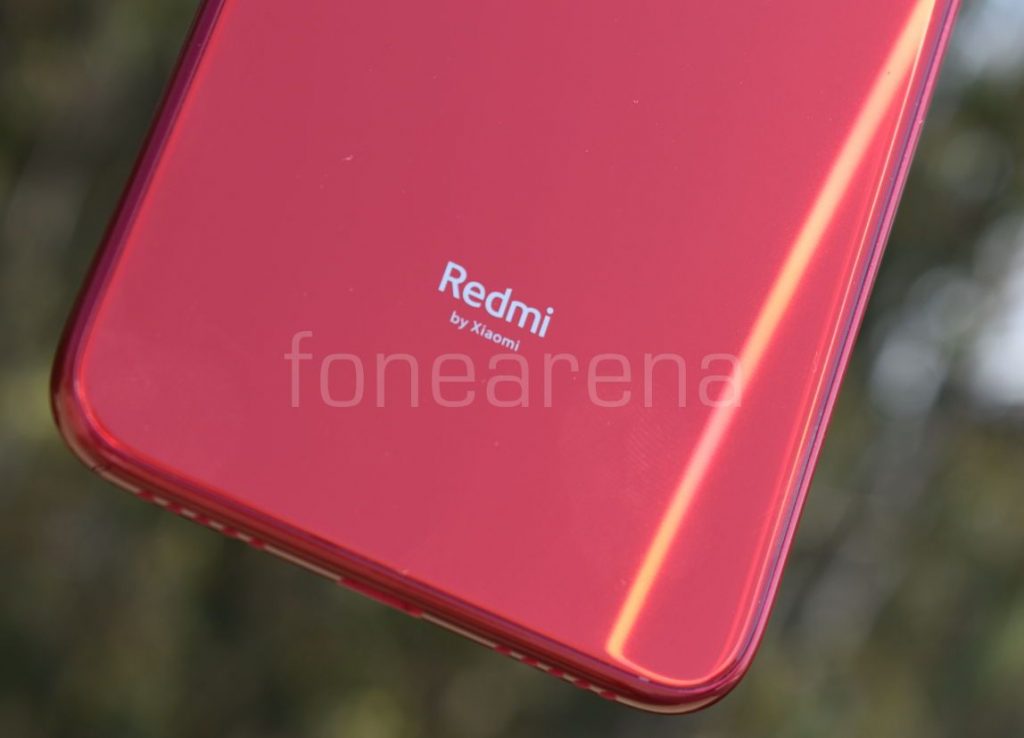 The phone has a plastic finish on the sides, so there are no issues for the signal recpetion. On the back, we now get Redmi branding as Redmi is a separate sub-brand in China. 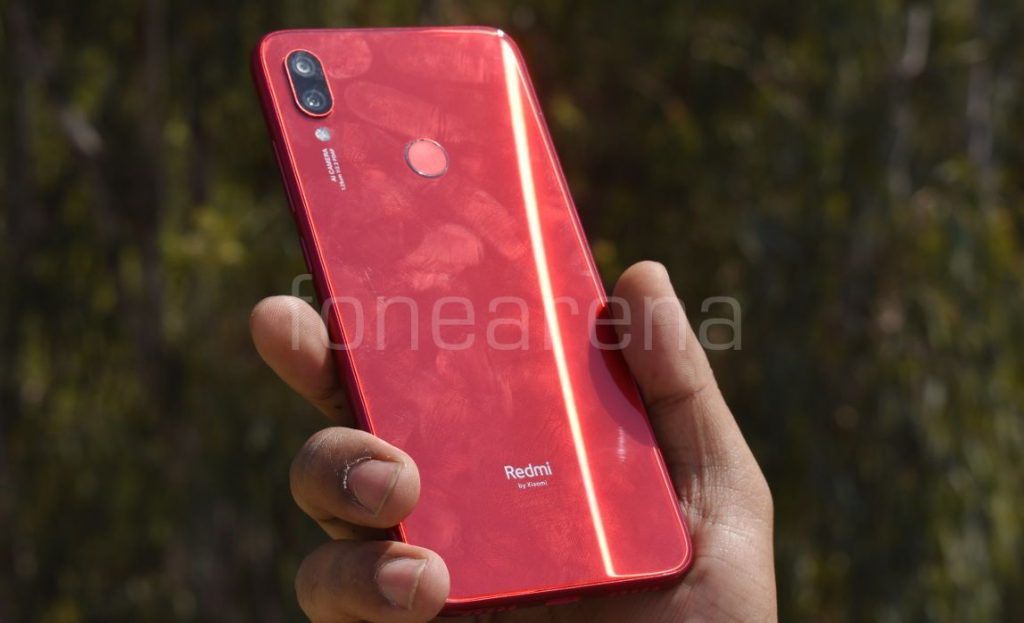 The glass back of the phone attracts fingerprint easily, but it is not slippery to hold.

Talking about the placement, the right side of the mobile has volume and power buttons, with tactile feedback. On the left, a hybrid dual SIM slot can be found. Redmi Note series retains 3.5mm headphone jack and IR emitter that can be found on top along with secondary noise cancellation microphone. For the first time, Xiaomi has decided to go with USB Type-C port on Redmi Note series devices that can be found at the bottom along with grilles on both sides, the right side houses a speaker inside and left side houses the primary microphone. 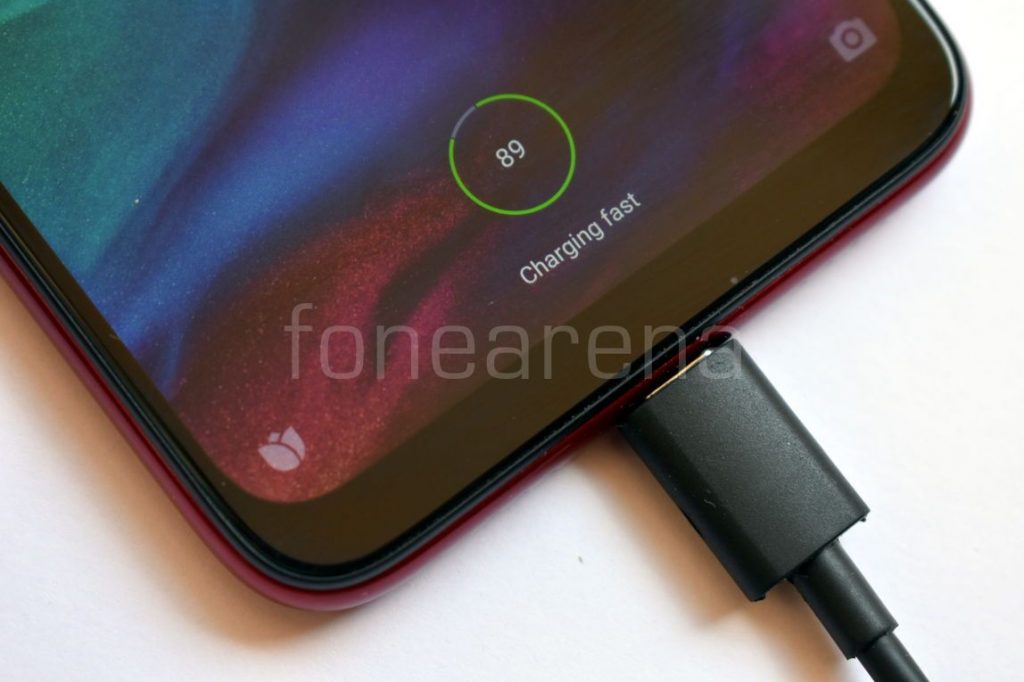 There is a small bezel below the display. The notification LED has been moved to the bottom edge that glows in white color. 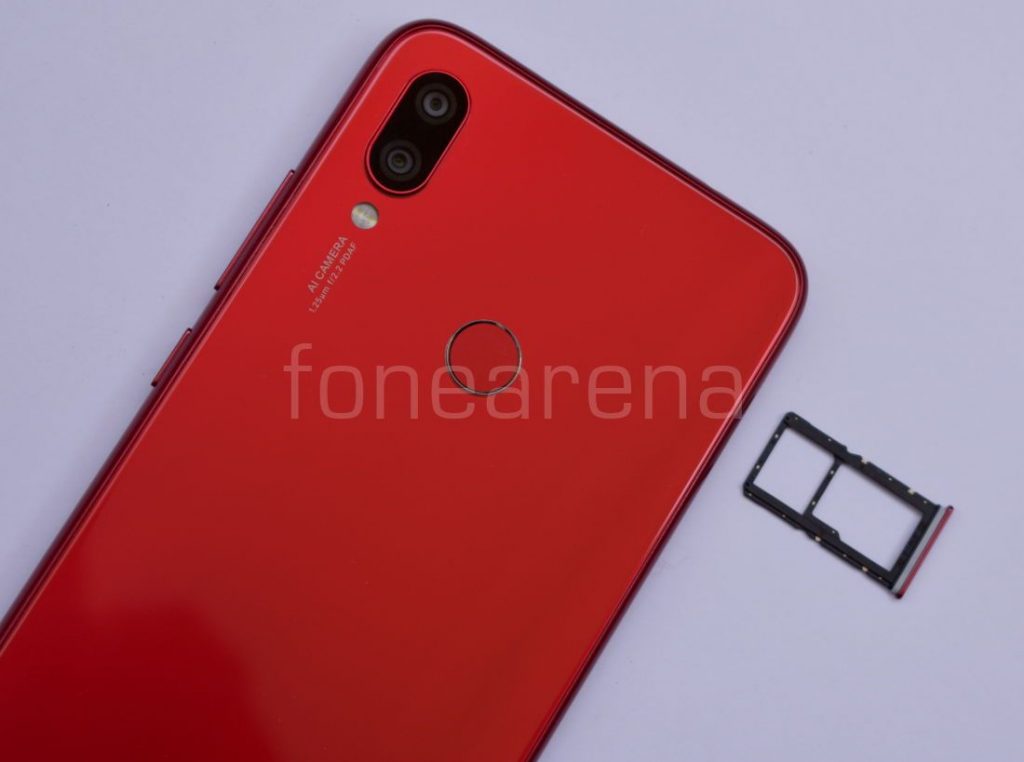 Cheaper Redmi series phones get a dedicated microSD card slot, but the company is sticking to Hybrid dual SIM slots for the Redmi Note series, even though some smartphones offer dedicated slots in the price range. The hybrid slot accepts two nano SIMs or a nano SIM and a microSD card up to 256GB. 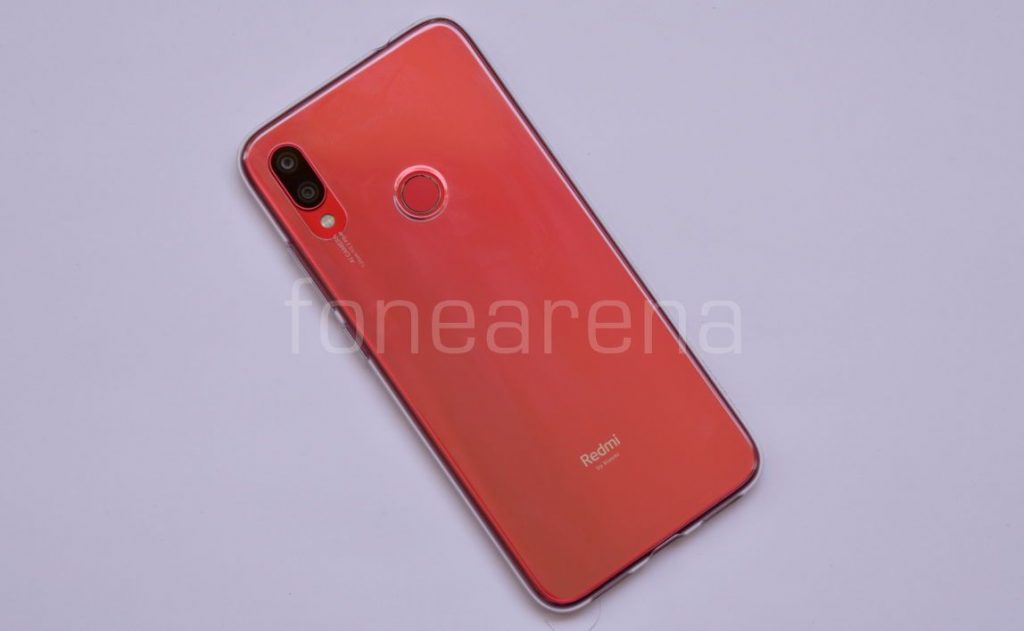 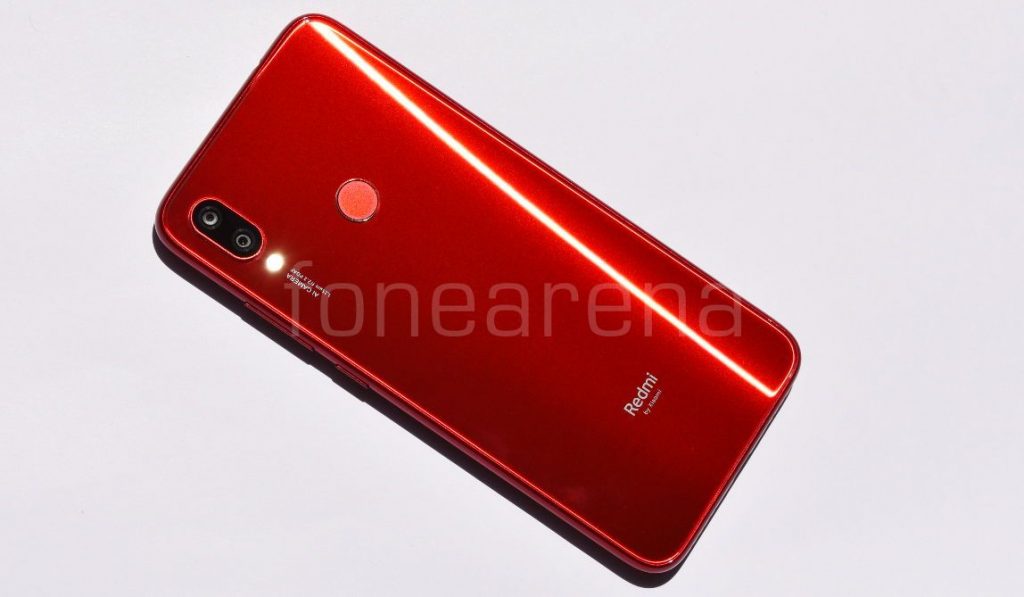 Redmi Note 7 packs dual cameras at the back arranged in a vertical array, the primary shooter is a 12-megapixel paired with another 2-megapixel secondary depth sensor, the single tone LED flashlight can be found below the camera module which is flushed inside the rear glass, the rear glass also has Corning Gorilla Glass 5 protection. The camera bump looks little weird and is not even when you place the phone on a flat surface. However, the camera lens doesn’t get scratched easily, seems like it has some kind of scratch-resistant glass. 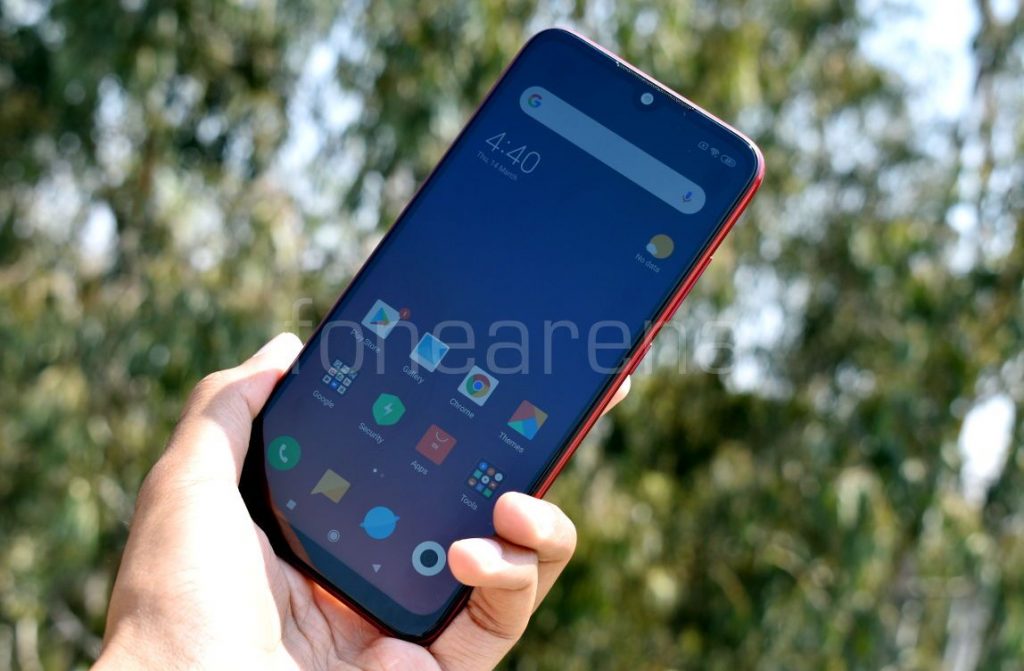 The Redmi Note 7 has a large 6.3-inch Full HD+ display with a pixel resolution of 2340 × 1080 pixels and a pixel density of about 409 PPI. It features a dot-notch display 19.5:9 aspect ratio 2.5D curved glass screen with rounded corners, we didn’t find ‘Dot Notch’ intrusive during our usage.

The display is bright, thanks to 450 nits brightness and 1500:1 contrast ratio and the colors are vibrant since it has 84% of NTSC color gamut but it would have been better to put a display with 500 nits brightness similar to Redmi Note 6 Pro display. The display also has Corning Gorilla Glass 5 protection but in our two weeks of usage, the display picked up minor scratches, so it’s better to put a screen guard on it. 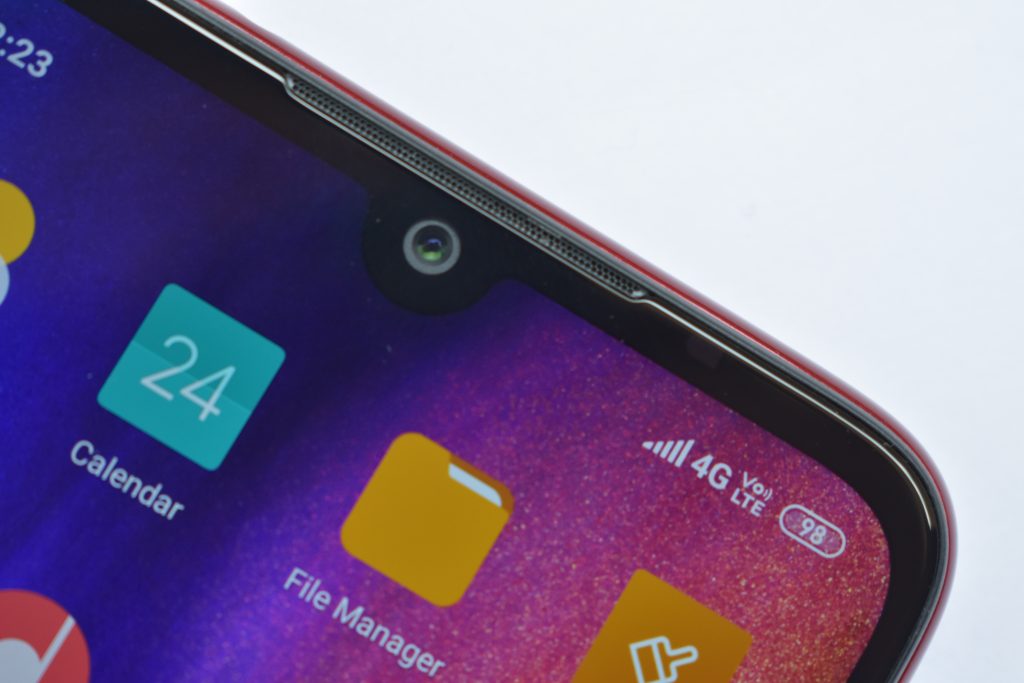 Xiaomi has always talked about the symmetric design on their smartphones in the past but here the top bezel is thicker as compared to the side bezels. Similar to the Pro variant, there is an earpiece on the top edge above the display. The usual set of proximity and ambient light sensors are present on the right side of the earpiece on the bezel, but these are hardly visible. There is also a 13-megapixel camera on the front with f/2.0 aperture.

The option to hide the notch is missing here unlike Redmi Note 7 Pro, and we hope that Xiaomi will introduce the feature with future updates. Under the display options, there are different options to adjust colors and contrast based on your preference. MIUI offers a reading mode that lets you reduce the blue light emission so it doesn’t cause eye strain when you use your device at night. 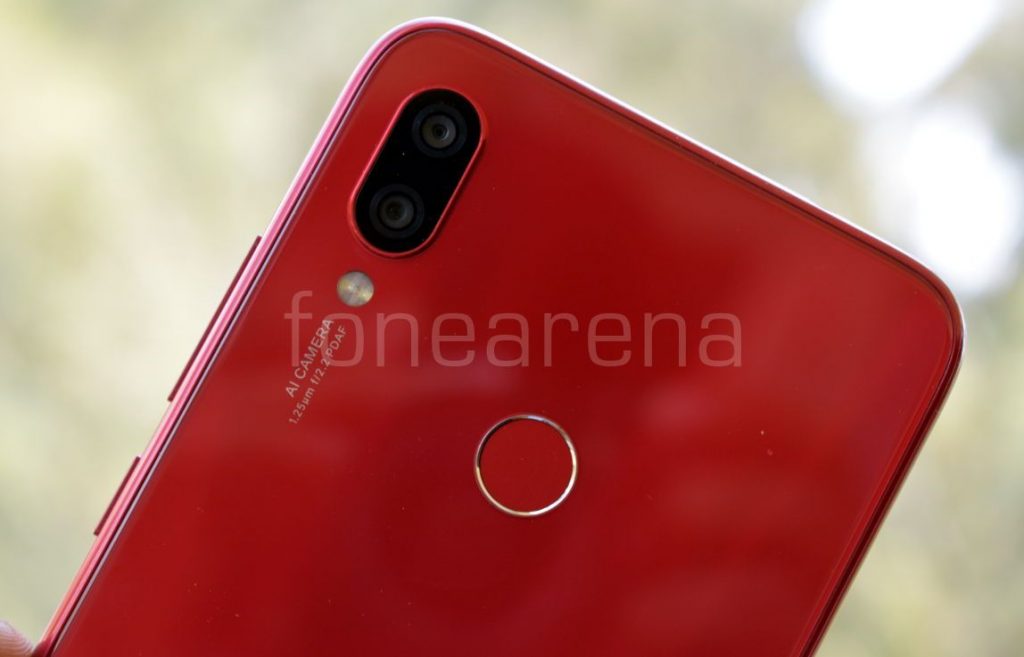 Redmi Note 7 packs dual cameras at the back arranged in a vertical array, the primary shooter is a 12-megapixel Sony IMX486 sensor with  f/2.2 aperture and large 1.25μm pixel size, PDAF and EIS which is accompanied by another 2-megapixel secondary depth sensor for portrait shots. On the front, it features a 13-megapixel front camera with f/2.0 aperture and 1.12μm pixel size but lacks the selfie flash on the front.

The camera UI is similar to other Xiaomi smartphones running MIUI 10 with flash, HDR, AI (that can detect 33 scene categories for rear and 12 scene categories for the front camera), color modes (Normal, Vivid, Film, Amour, Latte, Sun, Cookie, Calm, Soda, Gourmet, Glow, Berries, B&W and Fade) on the top. Pressing the menu option shows timer, tilt-shift, straighten, group selfie, beautify and Google Lens. There is a front camera toggle on the bottom along with option to select modes such as Short Video, Video, Photo, Portrait, Night, Square, Panorama and Pro mode to adjust white balance, shutter speed (1/1000s to 1/4 seconds) and ISO (ranging between 100 to 3200). Beautify option (that can be set from 1 to 5) is available for both front and rear cameras.

For the first time, Xiaomi has enabled Cam2API by default on a Redmi device, and so users can sideload ported Google Camera apks for advanced editing including RAW capture, a working apk can be downloaded from here.

Daylight shots came out great with good dynamic range, HDR shots are better. Dual camera portrait shots were good and the edge detection was good as well. Low-light shots are just fine, and there is a night mode making the images brighter offering more details, but there is still noise when there is hardly any light. Images with flash are good and the flash is not overpowering. Daylight front camera shots are decent, but low-light shots are nothing more than average since it only uses screen flash. Portrait for front camera looks artificial since it uses software-based blur. We also observe shutter lag while clicking the photos, the phone clicks a photo a second after you tap the shutter.

Check out some camera samples (Click the image to view the full resolution sample). 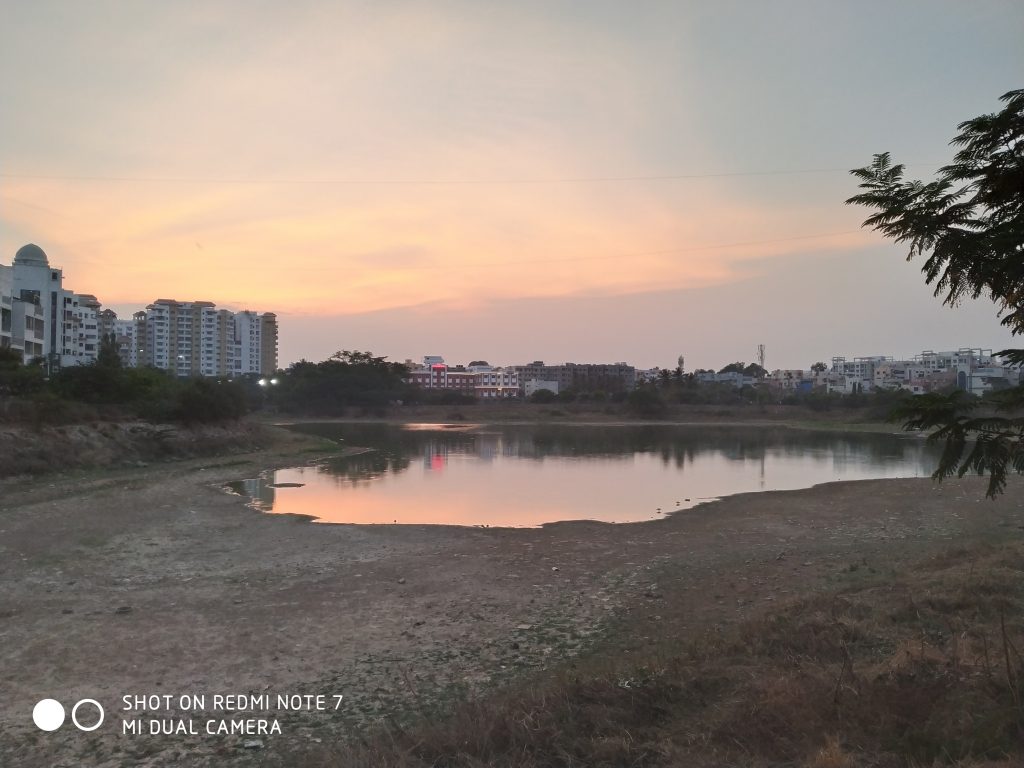 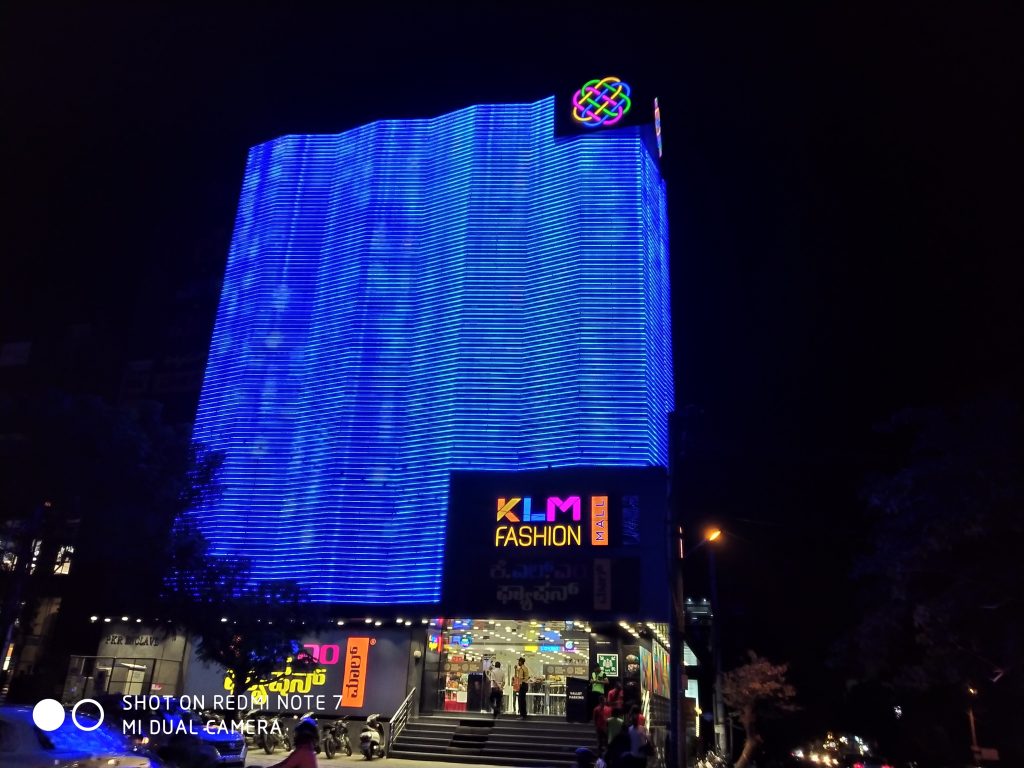 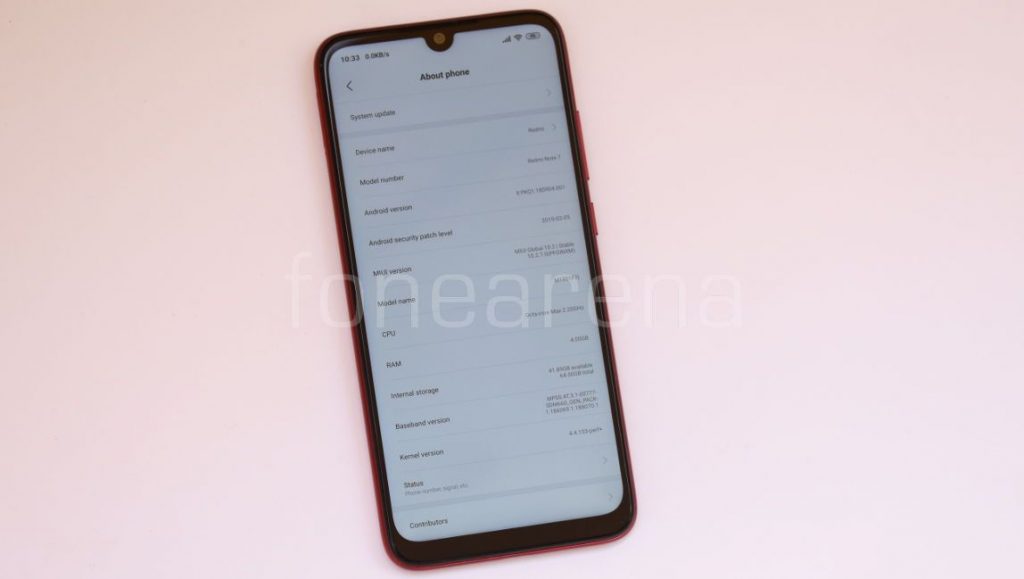 Redmi Note 7 runs on latest Android 9.0 (Pie) out of the box with MIUI 10 on top with Android security update for February 2019, Xiaomi has also rolled out an update to enhance low light camera performance.

Out of 4GB RAM around 3.66GB RAM is usable, and about 2GB of RAM is free when default apps are running in the background. Out of 64GB, you get about 51GB of free storage.

Apart from the usual set of utility apps, some Google apps and Xiaomi’s own set of apps, it comes pre-loaded with some bloatware like Amazon Shopping, Facebook, Dailyhunt, Opera News, Opera Mini and ShareChat apps which can be uninstalled easily. 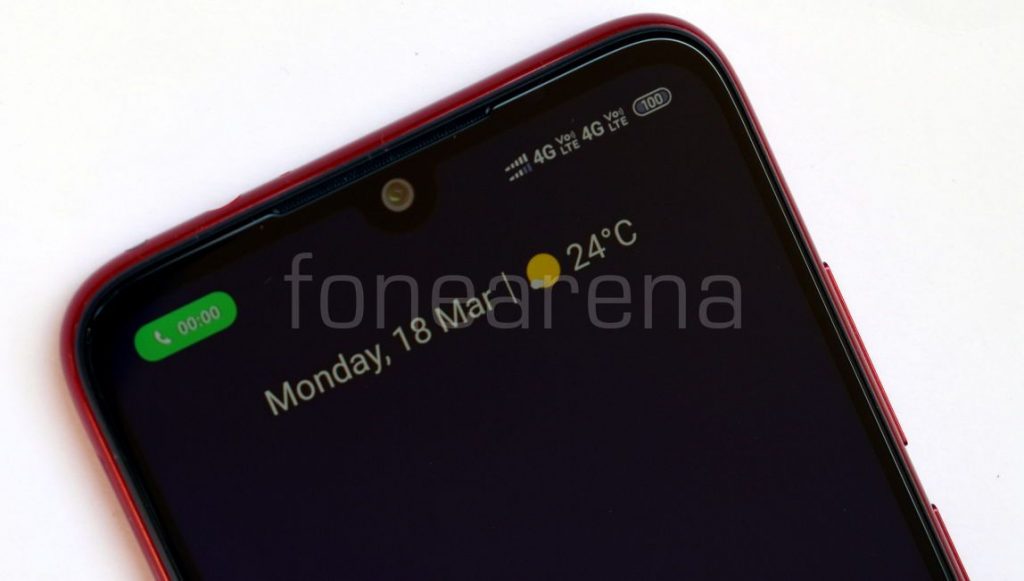 Xiaomi needs to optimize the UI for the notch, the notification icons aren’t permanent in status bar and disappear within couple of seconds, so you may miss some notifications if you rely entirely on status bar icons for notifications. Apart from this, we also observed status bar text such as time, data connection speed and battery icon overlapping with text within apps, refer to the screenshot below. 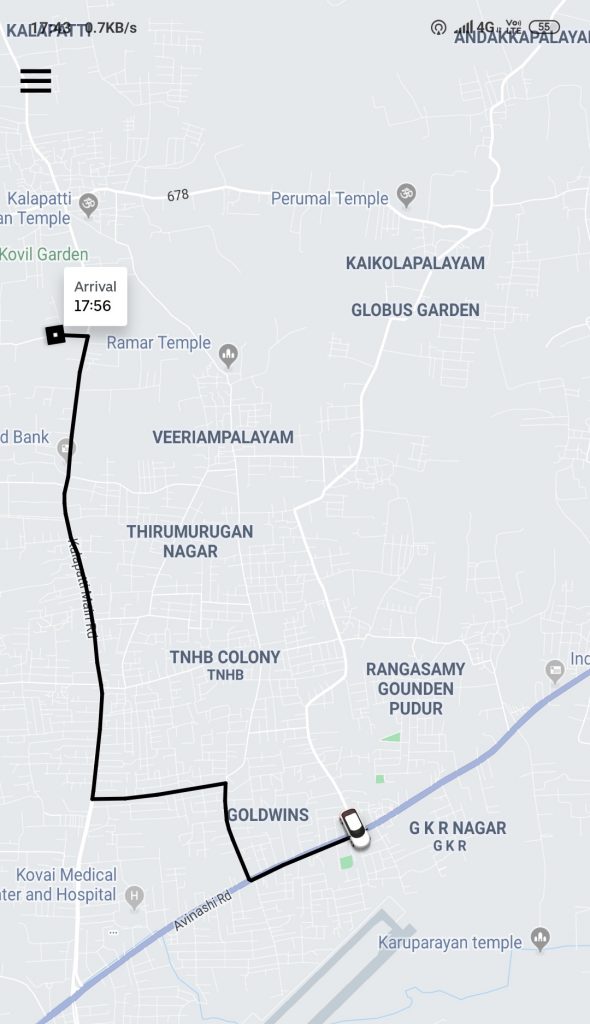 Xiaomi is infamous for showing ads on its phones with MIUI, which the company says is done in order to support the development cost of its own apps. If you don’t want to see ads, you have to disable recommendations while setting the phone up, promoted apps and in Xiaomi’s own apps such as Music, Mi Video, File Manager, Mi Drop, App Vault, Cleaner, and others. You can also uninstall these apps by following the procedure here without rooting the phone.

The Mi Music Player is the default music player which also has online streaming integration from Hungama. MIUI also offers headphones and audio effects which also has an equalizer option. It also has FM Radio with recording. Audio through the speaker is good. Since the speaker is present on the bottom, audio doesn’t get muffled when the phone is on a flat surface.

Unlike the POCO F1 that got the Widevine L1 months after the launch through an update, this comes with Widevine L1 support out of the box so that you can enjoy HD content on Hotstar, Amazon Prime Video, Netflix and other streaming apps.

It has the usual set of connectivity features such as Wi-Fi 802.11 ac (2.4 + 5GHz), Bluetooth 5, GPS + GLONASS. It has 4G connectivity and also has Voice-over-LTE (VoLTE) support for Reliance Jio, Airtel and supports Dual 4G VoLTE that lets you use 4G on both the SIMs. Similar to Snapdragon 636 it also has integrated Snapdragon X12 LTE modem. It lacks Wi-Fi passthrough that lets users use Wi-Fi and Wi-Fi hotspot at the same time.

The dialer and messaging UI are similar to other Xiaomi smartphones running MIUI 10. Since this is a dual SIM phone, you get the option to select either SIMs when calling or sending a text message. We did not face any call drops and the earpiece volume is good as well. 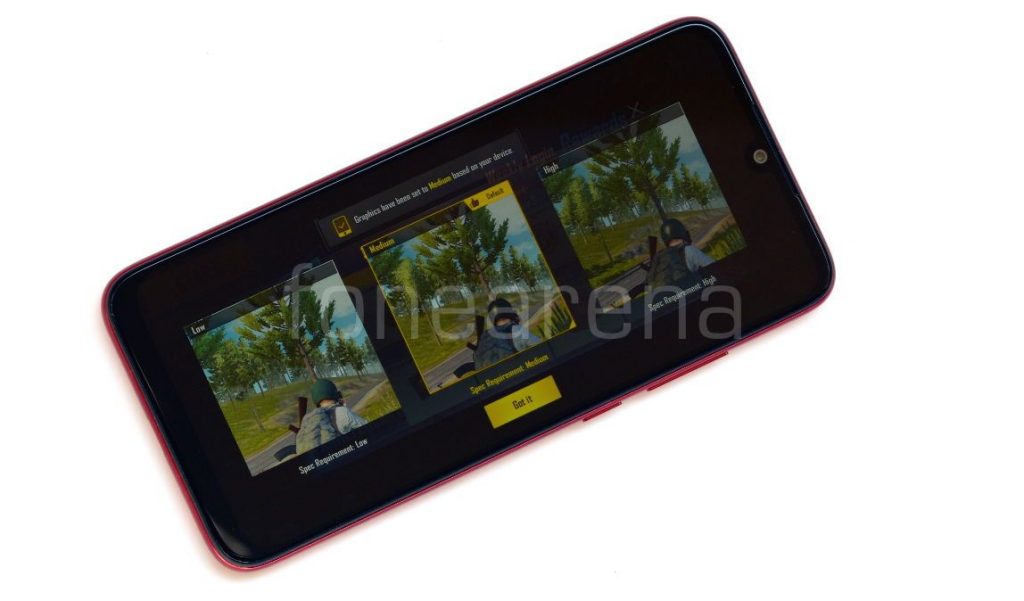 We did not face any issues in the graphic-intensive games, but we did encounter occasional frame drops in heavy games, PUBG works in medium graphics by default. It gets a bit warm on intensive gaming and 4G data use, but it doesn’t too hot to handle. Check out some synthetic benchmark scores below. 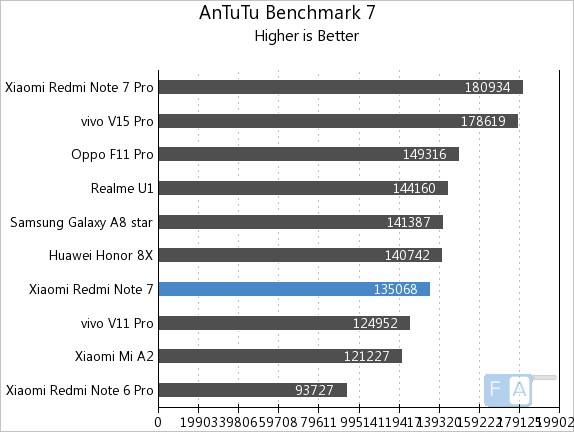 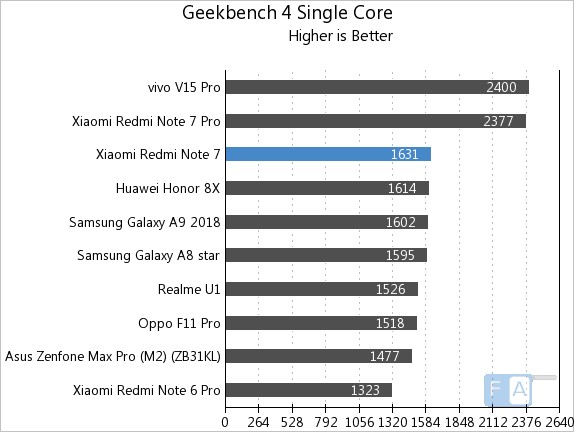 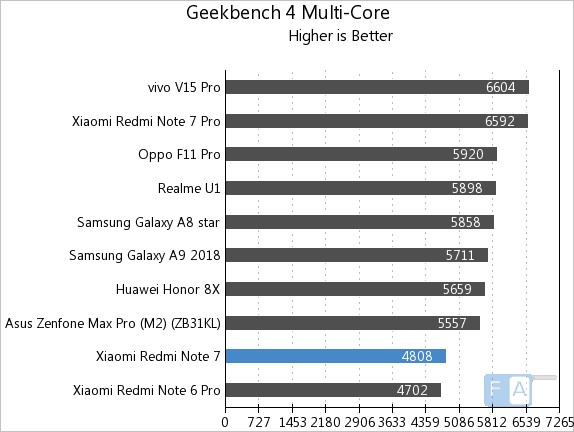 Check out the complete set of benchmark scores here.

Redmi Note 7 packs a 4000mAh (typical)/3900mAh (minimum) non-removable battery under the hood. During our testing, the device lasted for a day easily with heavy usage and two days with moderate usage. The phone also has support for Quick Charge 4, it takes about 1 hour 50 minutes to charge it from 0 to 100%, 1 hour from 0 to 75% and 38 minutes from 0 to 50% with an 18W charger. Even though the phone comes with quick charging support, it comes only with a standard 5V/2A charger in the box.

So who is Redmi Note 7 for? If you’re in the market looking for a smartphone with great design, performance and battery life for Rs. 10k, then Redmi Note 7 is the smartphone to go for. Without any doubt, Redmi Note 7 is the most powerful smartphone available for 10k, it may not seem as VFM as the Redmi Note 7 Pro, but it is definitely a great buy for the the price. It goes on sale exclusively on Flipkart, Mi.com and Mi Home stores every week.