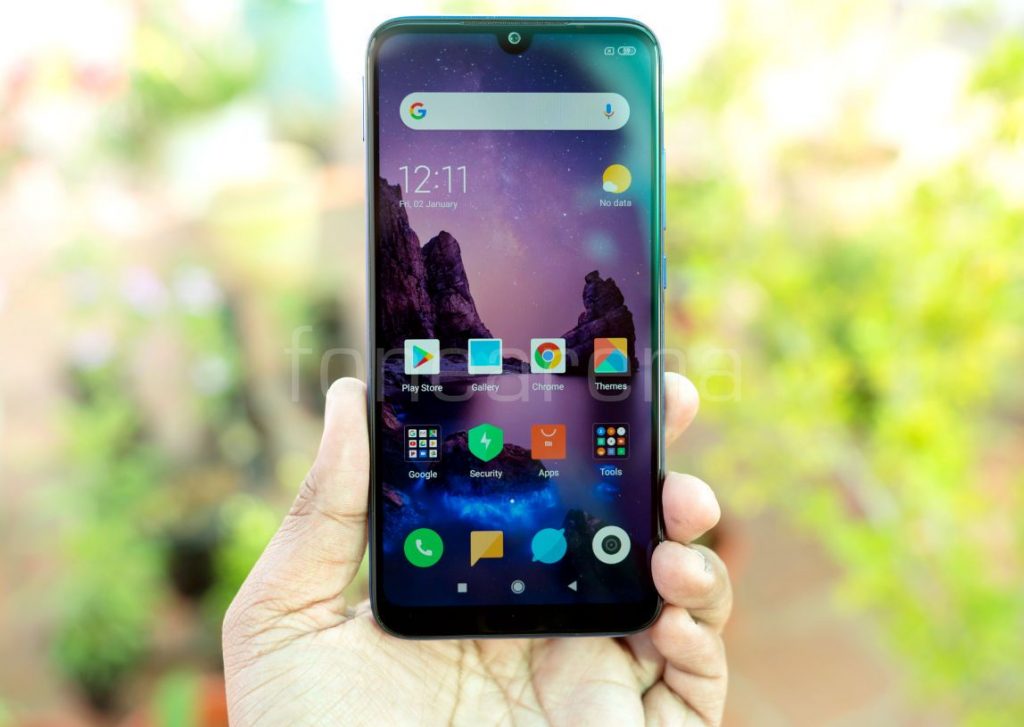 Xiaomi launched the Redmi Y3, the company’s latest selfie-focused smartphone and the successor of the last year’s Redmi Y2 in India recently. It has a bigger 19:9 aspect ratio screen, faster SoC, better selfie camera, battery and more. Is it worth spending Rs. 9999 for a selfie smartphone? Let us find out in the review. 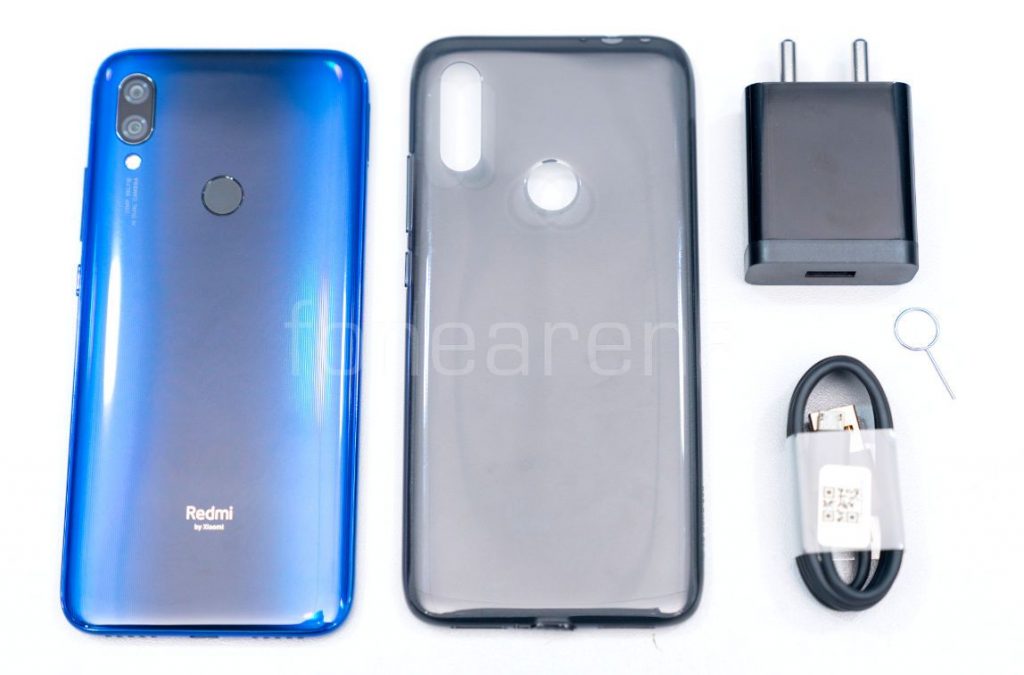 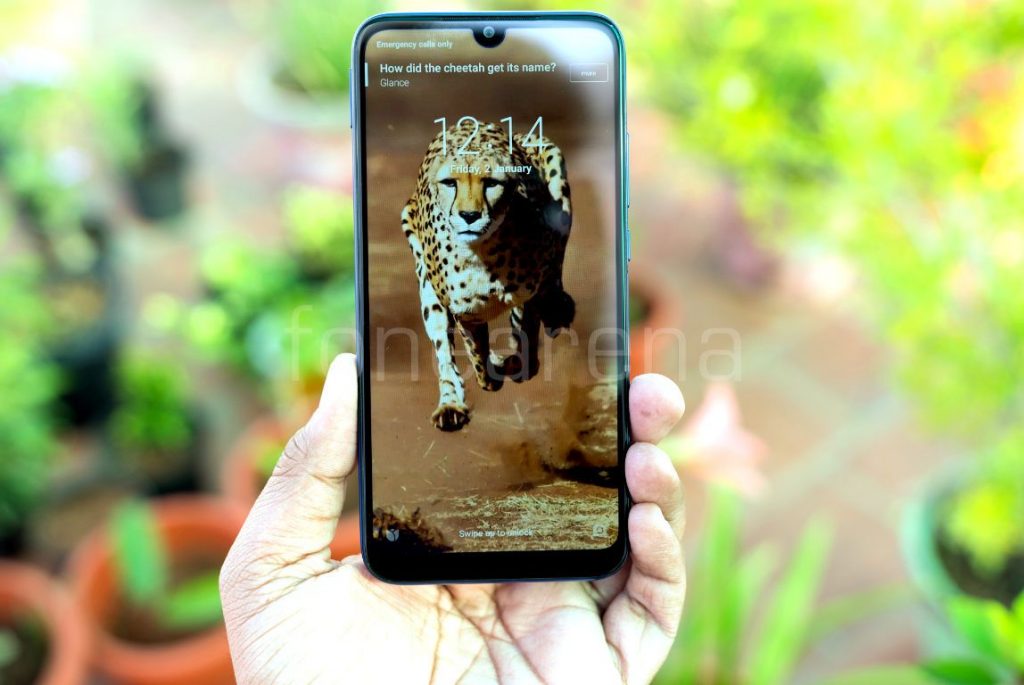 The main change in the Redmi Y3 when compared to the Redmi Y2 is its 19:9 aspect ratio 2.5D curved glass screen. It has a large 6.26-inch HD+‘Dot Notch’ display with a pixel resolution of 1520 × 720 pixels and a pixel density of about 269 PPI. The display is bright, thanks to 450 nits brightness and 1500:1 contrast ratio and the colors are vibrant since it has 84% of NTSC color gamut. Sunlight legibility is good, since it has a Sunlight display that uses hardware-level technology to adjust the contrast of each pixel in real time, so images are less affected by glare. It also has Corning Gorilla Glass 5 protection.

Since this has a 19:9 aspect ratio screen, you can pinch to zoom to fill the screen when you use video apps, but the content is cropped. There is also an option to hide the notch that adds a black bar on the top. Under the display options there are different options to adjust colors and contrast based on your preference. There is also reading mode that lets you reduce the display’s blue light emission so it doesn’t cause eye strain when you are reading at night. There is Dark mode, which is a new addition to the latest MIUI 10.3. 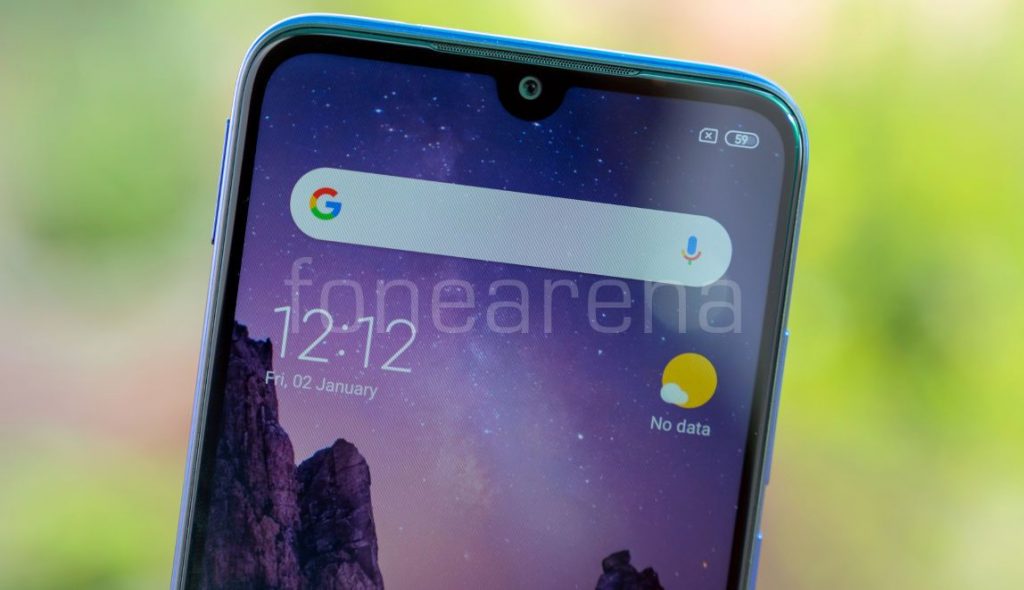 Above the display there is an earpiece on the top edge. The usual set of proximity and ambient light sensors are present on the bezel, but these are hardly visible. It also has a gyroscope and a magnetic sensor, otherwise known as a magnetometer. There is also a 32-megapixel camera on the front with f/2.25 aperture. 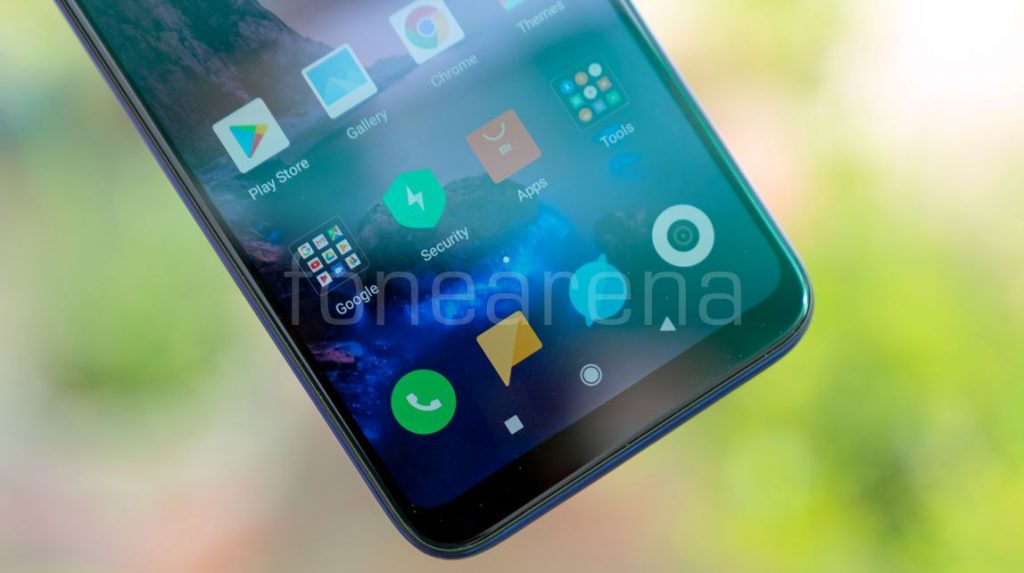 There is a small bezel below the display. The notification LED his present on the bottom edge that glows in white color. 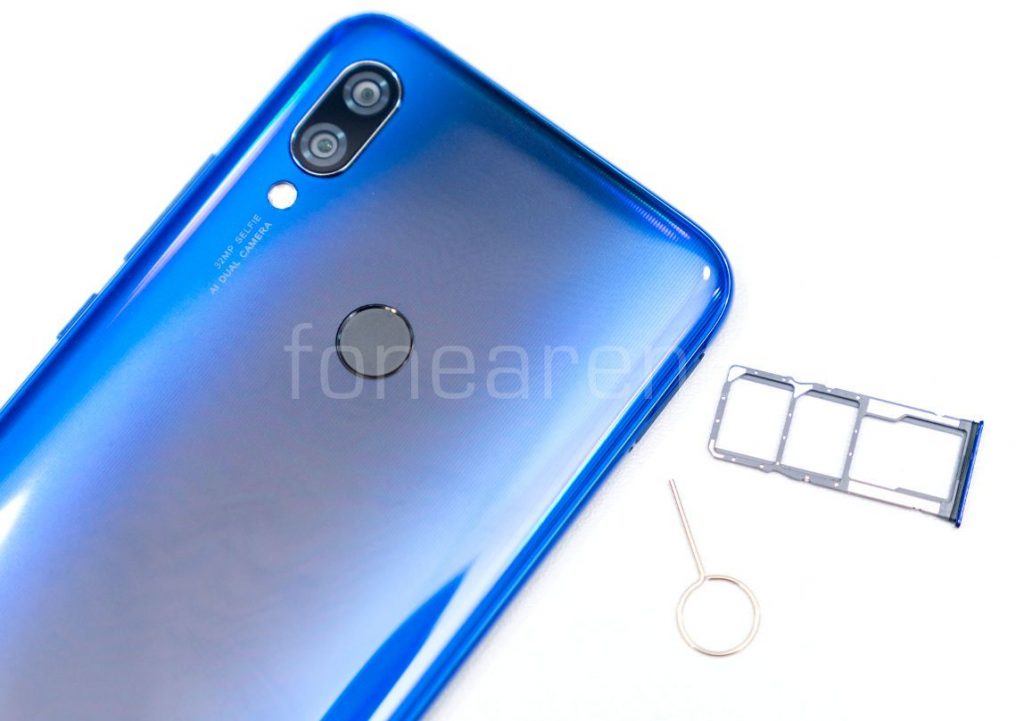 Similar to other cheaper Redmi series phones, it has a dedicated dual SIM and a micro SD slot that accepts cards up to 512GB. The phone is 8.47mm thick, which is compared to 8.1mm thick Redmi Y2, but it is just 75.58mm wide and 158.73mm tall compared to 77.26 width and 160.73 height on the predecessor, even though this has a slightly bigger display.

On the back there is a 12-megapixel rear camera with LED flash, secondary 2-megapixel camera and there is a fingerprint sensor below that. This has slight camera bump, which looks weird even with the case. However, the camera lens doesn’t get scratched easily since it has some kind of scratch-resistant glass. 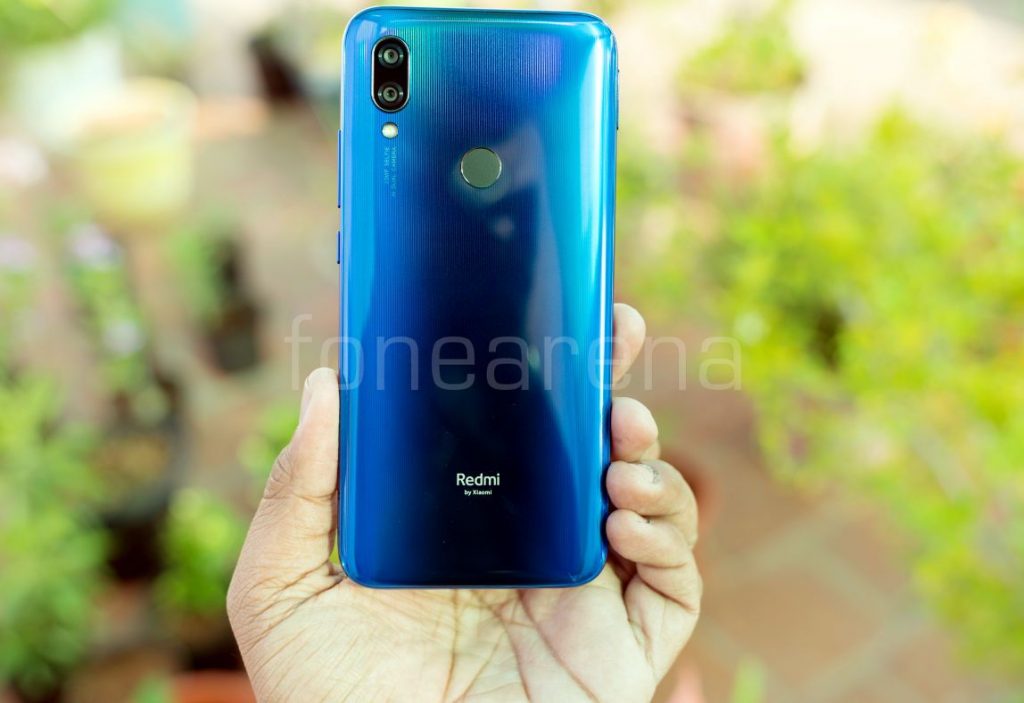 Even though the phone has a large screen, it is compact to hold. It has about 81% screen-to-body ratio, better than 74% screen-to-body ratio in the predecessor. Unlike the predecessor, this has a new Aura Prism design that offers Dynamic reflection effect achieved by millions of micro lines. It has rounded corners that blends seamlessly into the body. However, the plastic back attracts fingerprints easily and is prone to scratches, so it is recommended to use the bundled protective case. It is not slippery to hold. 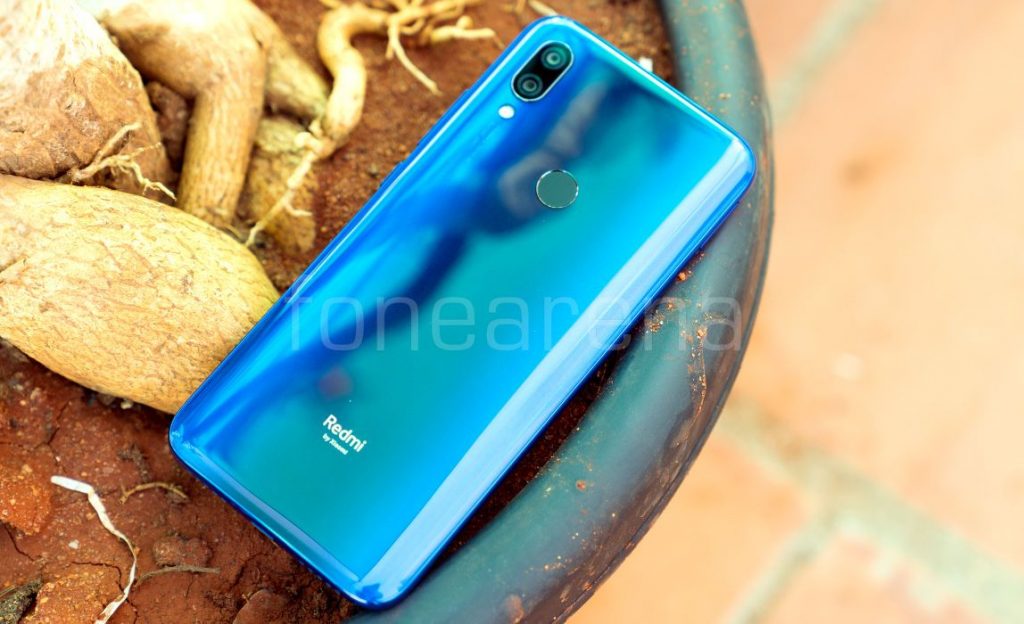 The phone even has a P2i nano coating similar to the latest Redmi 7 series phones, making it splash proof and it can also withstand light rain, but can’t be immersed in water since it lacks IP ratings. It packs a 4000mAh built-in battery, which is 33% more than the 3080mAh battery in the predecessor. It is a bit heavy at 180 grams since it has a large battery. 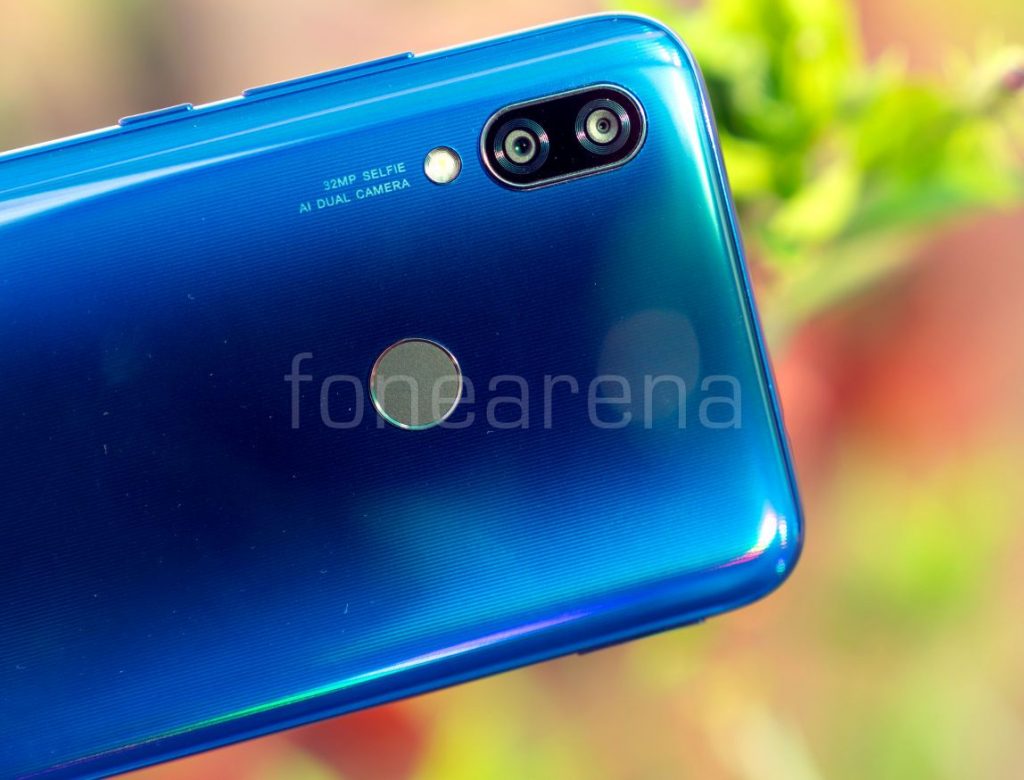 The camera UI is familiar with other Xiaomi smartphones running MIUI 10 that includes flash toggle, HDR, AI (that can detect 33 scene categories), color modes (Normal, Vivid, Film, Amour, Latte, Sun, Cookie, Calm, Soda, Gourmet, Glow, Berries, B&W and Fade) on the top. Pressing the menu option shows timer, tilt-shift, straighten, group selfie, Google lens and beautify (that can be adjusted from 1 to 5) options. There is a front camera toggle on the bottom along with option to select modes such as Short Video, Video, Photo, Portrait, Square, Panorama and Pro mode (to adjust white balance, shutter speed (1/1000s to 32 seconds) and ISO (0 to 3200)). Xiaomi has also added palm shutter to the phone that shoots an image after 3 seconds if you show the palm in front of the camera.

Since Xiaomi has enabled Cam2API by default on the phone, you can sideload ported Google Camera APK for advanced editing including RAW capture.

Coming to the image quality, daylight shots came well in bright conditions, for cloudy conditions you can enable AI, and it gets better if you enable HDR since it improves the dynamic range. Macro shots were good with good amount of details, and dual camera portrait shots came out well with decent edge detection. Low-light shots are decent, but most shots have noise. There is no separate low-light mode, so you have to enable AI and leave the phone to detect it. Images with flash are good, and it is not overpowering.

Coming to the front camera, the large sensor captures more details, offers good dynamic range, thanks to 4-in-1 Super Pixel technology that lets the camera’s sensor hardware combine 4 pixels into a single large pixel, which is good especially in low lighting conditions. Portrait for front camera uses software-based blur, and the edge detection is better compared to the Redmi Y2. You can enable 32MP mode on the top that offers a lot of details, but the images are about 20MB in size. AI beautify 4.0 enhances the image, and it focuses only on the face. It doesn’t have a selfie flash, and comes with screen flash, which is fine. 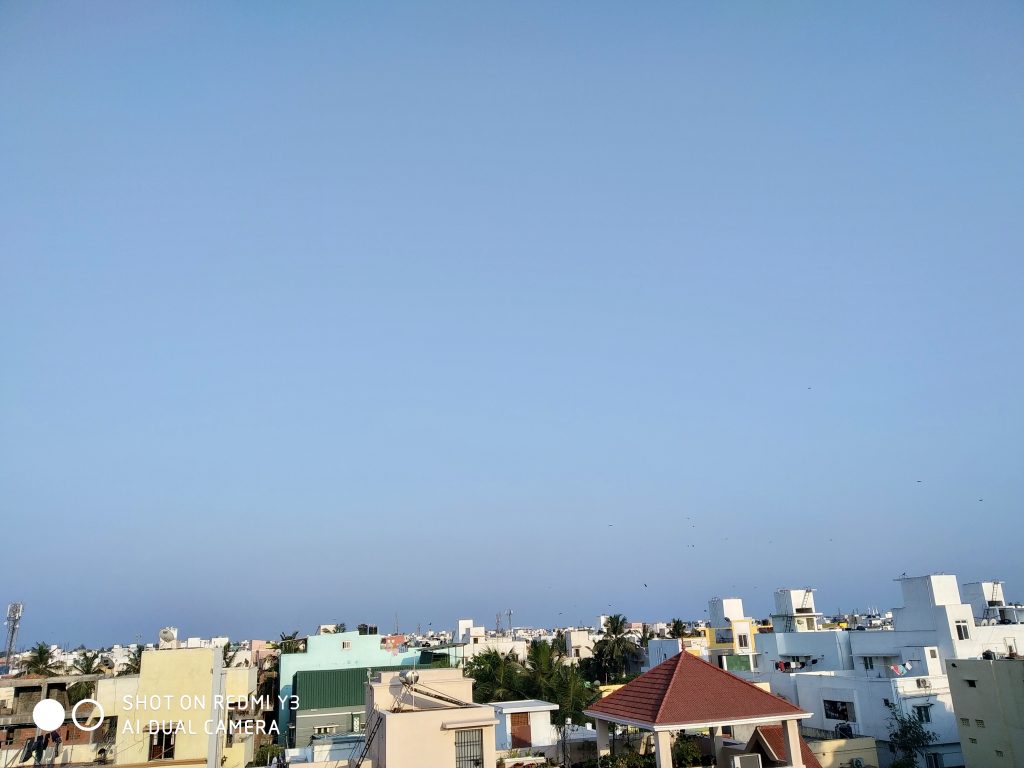 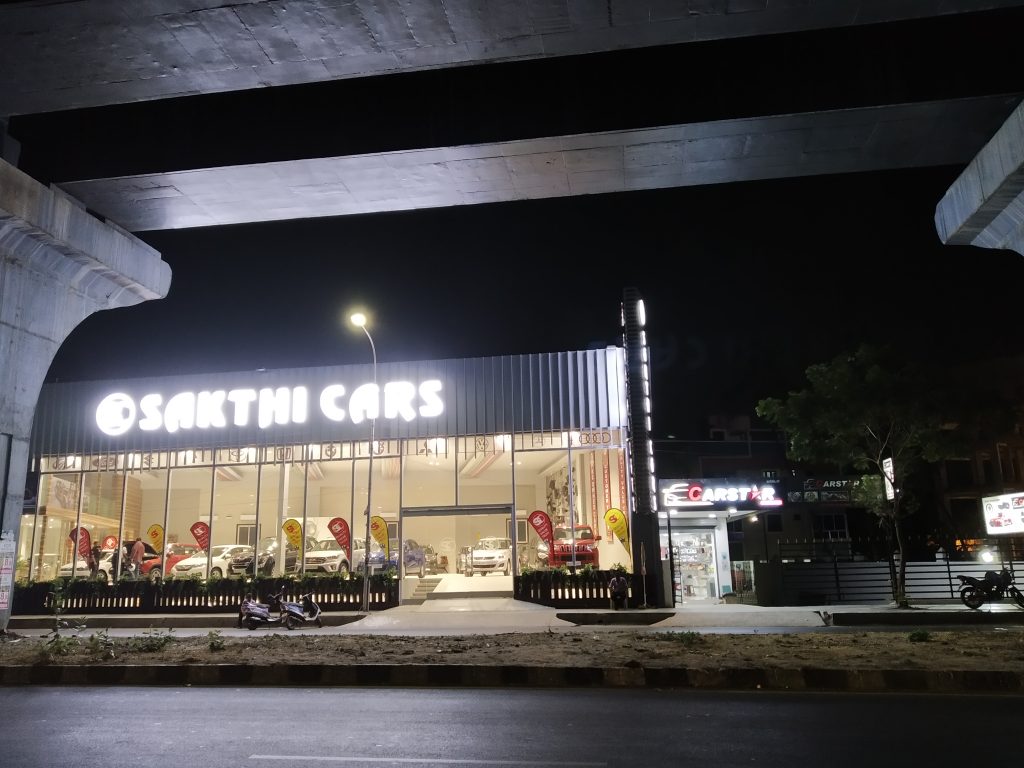 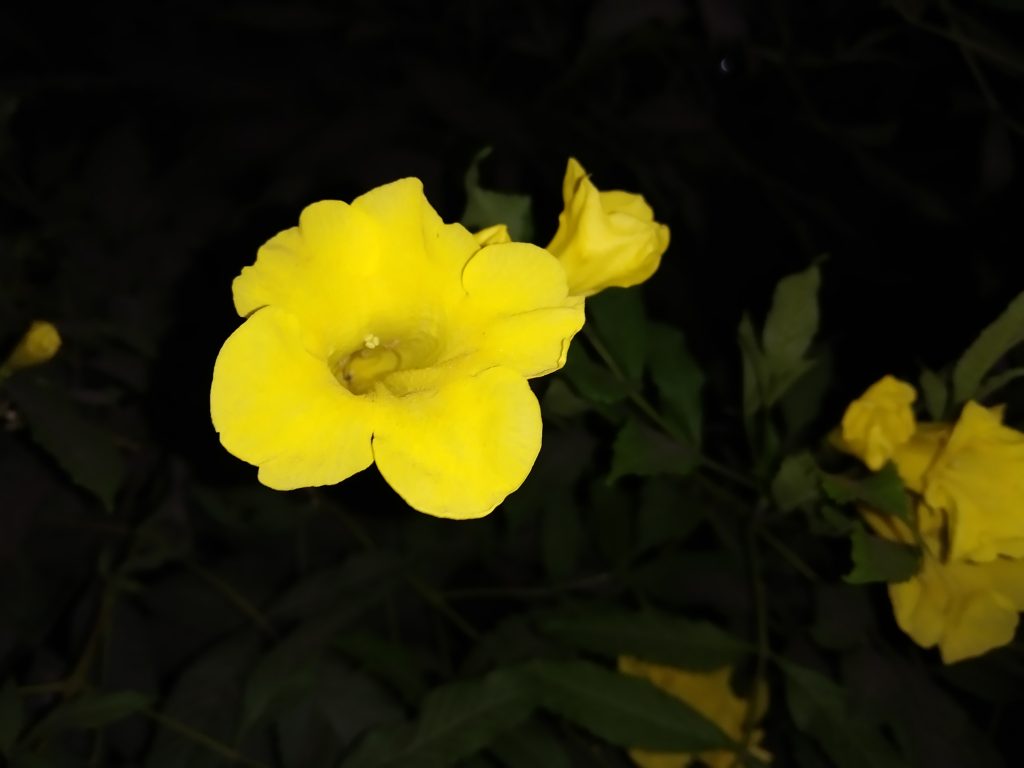 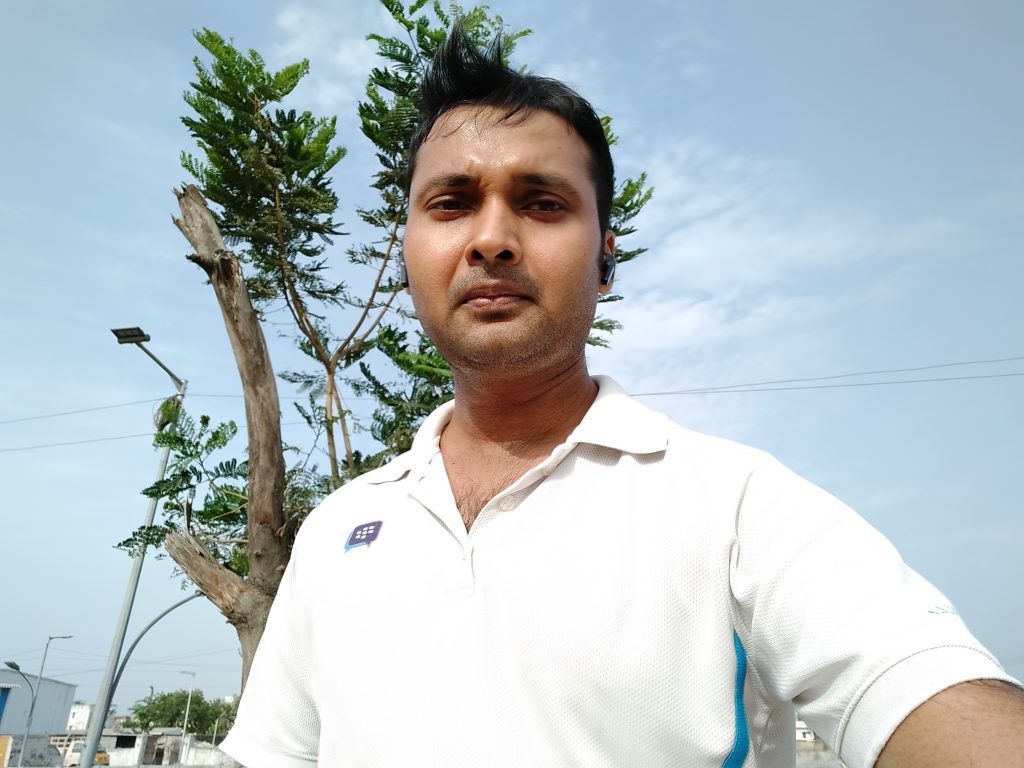 It can record videos at 1080p resolution at 30 fps. Even though it has 60 fps option, it still records at 30fps. The front camera also has 1080p 30 fps video recording and both the cameras support EIS. Check out the video sample below.

It runs Android 9.0 (Pie) out of the box with MIUI 10 on top with Android security update for April, 2019. MIUI 10 that was introduced last year brings several features including full-screen hand gestures and improved recent menu that takes advantage of the full-screen displays, improved single-finger swipe down gesture to expand notifications, redesigned volume sliders and more. Xiaomi has been updating its App Vault with more cards and features. It has all the usual set of features such as Dual Apps, Second Space, App Lock, Quick Ball and more.

Apart from the usual set of utility apps, Google apps and Xiaomi’s own set of apps, it comes pre-loaded with Amazon Shopping, Facebook, Dailyhunt, Opera News, Opera Mini and ShareChat apps. You can easily uninstall these apps. Out of 3GB RAM, you get 2.8GB of usable RAM, and about 1.2GB of RAM is free when default apps are running in the background. Out of 32GB, you get about 21GB of free storage. The built-in Cleaner inside the storage lets free up space by clearing cache and obsolete files.

Since the phone has an infrared sensor for remote function, it comes with Mi Remote that lets you control your home appliances easily. It worked flawlessly with Samsung TV, Airtel Set-top box, Ogenral AC and other appliances. It also supports A/V receiver, DVD Player, Projector, Camera and more.

Xiaomi is infamous for showing ads on its phones with MIUI, which the company says is done in order to support the development cost of its own apps. If you don’t want to see ads, you have to disable recommendations while setting the phone up, promoted apps and in Xiaomi’s own apps such as Music, Mi Video, File Manager, Mi Drop, App Vault, Cleaner, and others. You can also uninstall these apps by following the procedure here without rooting the phone.

The phone has a fingerprint sensor on the back. It immediately unlocks phone just by keeping your finger on the home button so that you don’t have to press it. You can add up to 5 fingerprints. You can also use the fingerprint for app local and payments in apps. The phone also has face unlock, but it is not as secure as fingerprint since it can be unlocked with a photo. It also doesn’t work if you use sunglasses or hats.

The Mi Music Player is the default music player. There is also equalizer. It also has FM Radio with recording. Audio through the speaker is decent, but it could be better since there is voice distortion on full volume. Since the speaker is present on the bottom, audio doesn’t get muffled when the phone is on a flat surface. Audio through earphones is good. This doesn’t have Widevine L1 support and only has L3 support. Widevine L1 certification is not expected in this price range, but some devices in this price segment like Samsung Galaxy A10 support it.

It supports 4G VoLTE for Reliance Jio and Airtel as well as support Dual 4G VoLTE that offers 4G in both the SIM cards at a time. Other connectivity options include Wi-Fi 802.11 b/g/n (2.4GHz), Bluetooth 4.2 LE and GPS. It also has USB OTG support that lets you connect USB drives. It lacks Wi-Fi passthrough that lets users use Wi-Fi and Wi-Fi hotspot at the same time.

The dialer and messaging UI are similar to other Xiaomi smartphones running MIUI 10. Since this is a dual SIM phone, you get the option to select either SIMs when calling or sending a text message. Moving on, the call quality is good, and we did not face any call drops and the earpiece volume was loud. 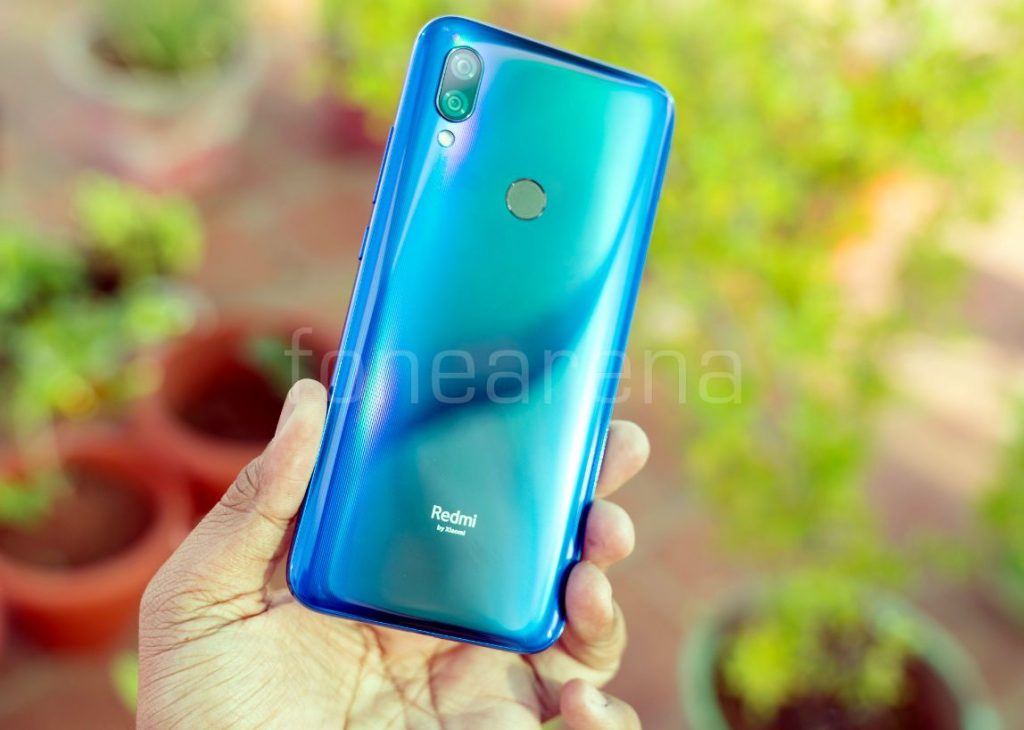 The Redmi Y3 is powered by Qualcomm Snapdragon 632 14nm Mobile Platform with Adreno 506 GPU. 3GB RAM compliments the hardware in making multi-tasking easier than ever. Talking about the real world experience, the performance is smooth, but the gaming performance is just fine and not exceptional since this has an Adreno 506 GPU. Check out the synthetic benchmark score below. 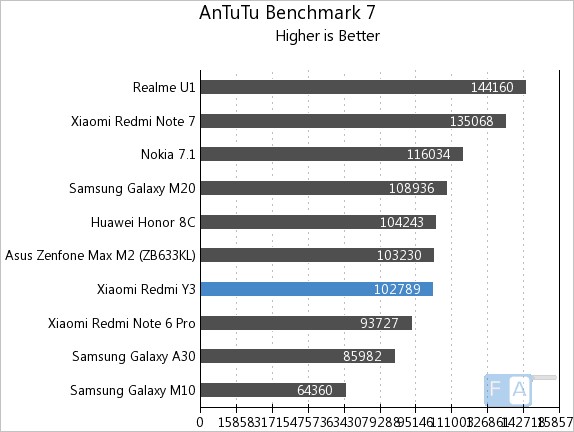 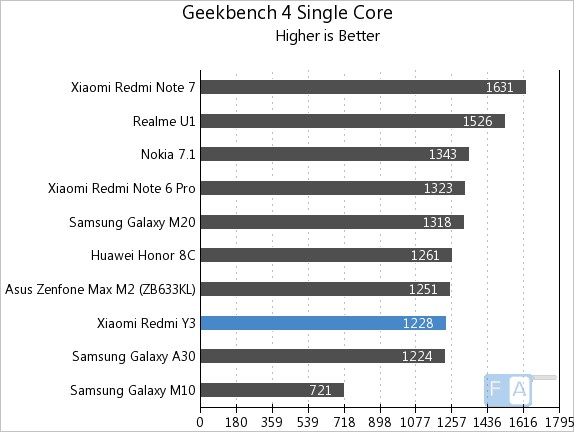 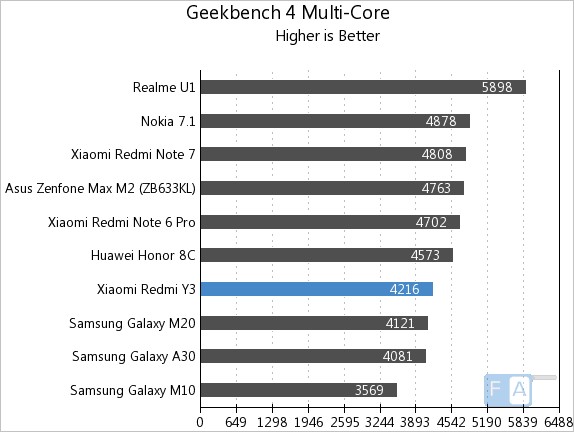 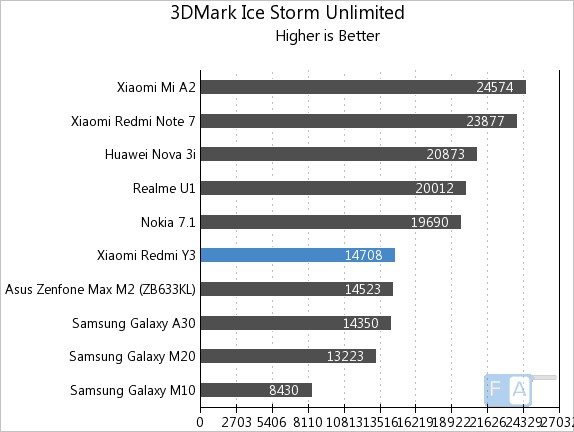 The 4000mAh (typical)/3900mAh (minimum) battery offers brilliant battery life that lasts the whole day even with heavy use. With average use it lasted for two days, which is good. 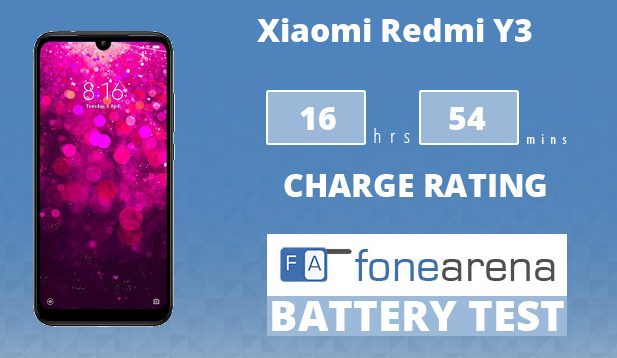 In our One Charge rating, the Redmi Y3 scored 17 hours 48 minutes, which is good. Since doesn’t have support for fast charging it takes 2 hours and 18 minutes to charge the phone from 0 to 100% with the bundled 5V/2A charger, and 0 to 50% took about 50 minutes.

So, which one should you get? Redmi Y3 or the Redmi Note 7 at Rs. 9999. We recently made a specs comparision between the two phones that makes it clear that Redmi Y3 is strictly for those who need a good selfie camera and dedicated SIM slots. The company recently confirmed that the Redmi Note 7 will soon be replaced by the Note 7S with a better camera, so you have to shell out Rs. 1000 more. But, it is worth spending a bit more since you get a better screen, 48MP rear camera, faster performance, support for fast charging, and lots more. If you are tight on the budget, and selfie is not your preference, the Redmi 7 that is Rs. 1000 cheaper rate is also a good choice since it shares almost similar specifications as the Redmi Y3.

Unlike the Redmi 7 that is now on open sale,  the Redmi Y3 goes on sale every Tuesdays through Amazon.in, Mi.com and Mi Home Stores. To summarize, here are the pros and cons of the smartphone.