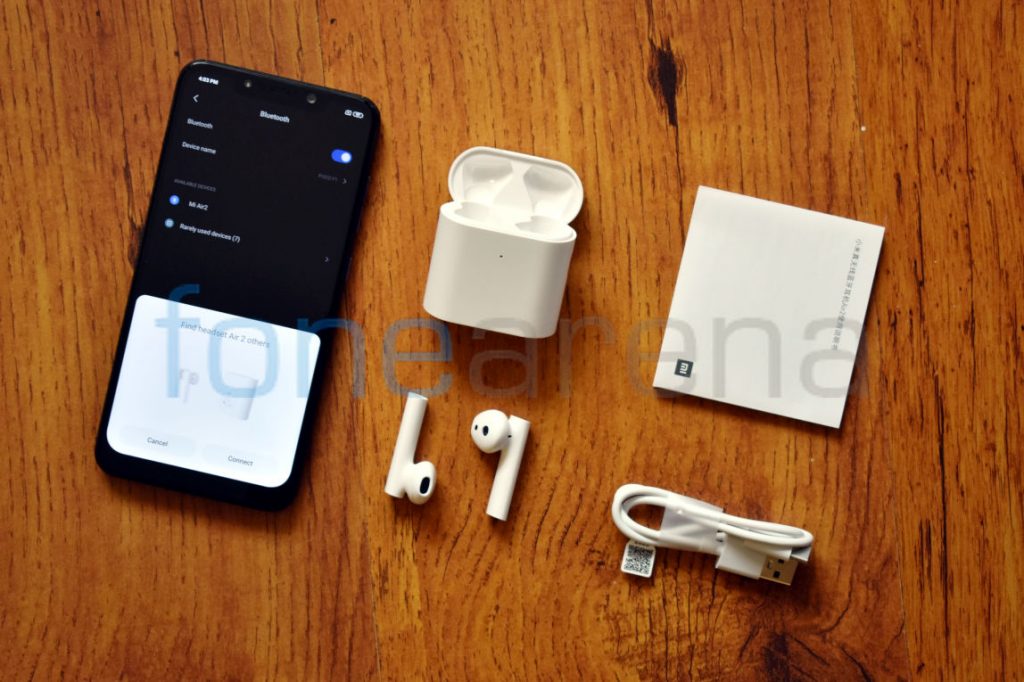 Read on our Mi True Wireless Earphones 2 (Mi AirDots Pro 2) review to find out, for the rest of the article we will refer to it as Mi AirDots Pro 2. For the review, we used a unit bought from ShareSave which runs a different firmware as compared to India units. 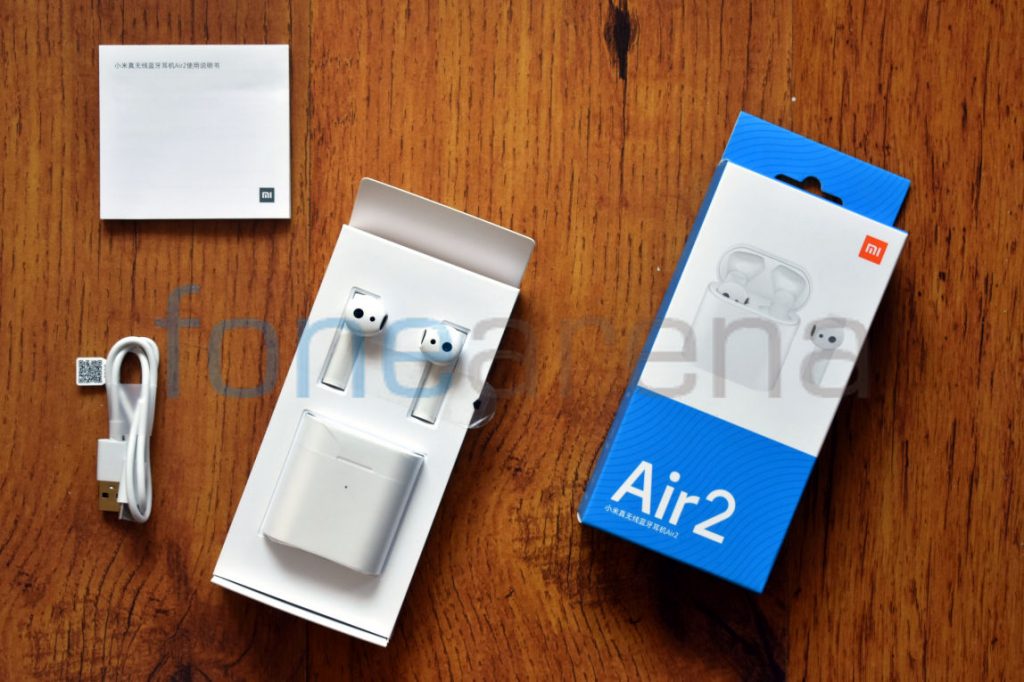 We recently unboxed the Mi AirDots Pro 2, check out the unboxing and first impressions. 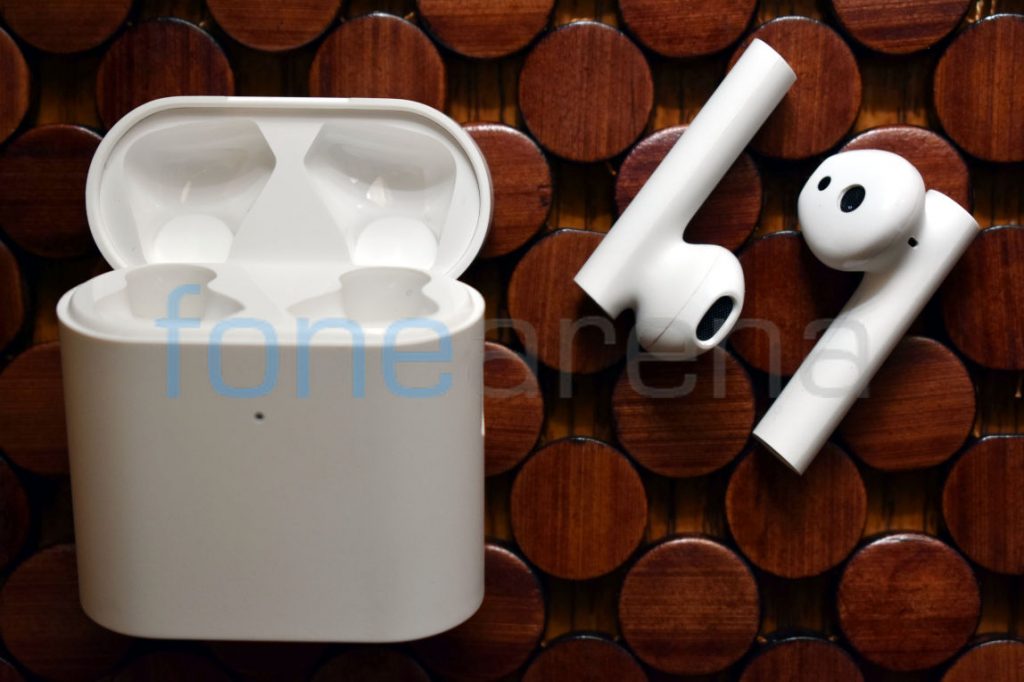 Mi AirDots Pro 2 features a minimal clean design similar to other Xiaomi eco-system products but Mi AirDots Pro 2 looks more like Apple Airpods than the first-gen Mi AirDots Pro. Mi AirDots Pro 2 comes with a case which is made up of ABS plastic, due to which it is lightweight, with the case, the total weight of the package is about 50 grams. The charging case has a matte finish making it less prone to scratches. 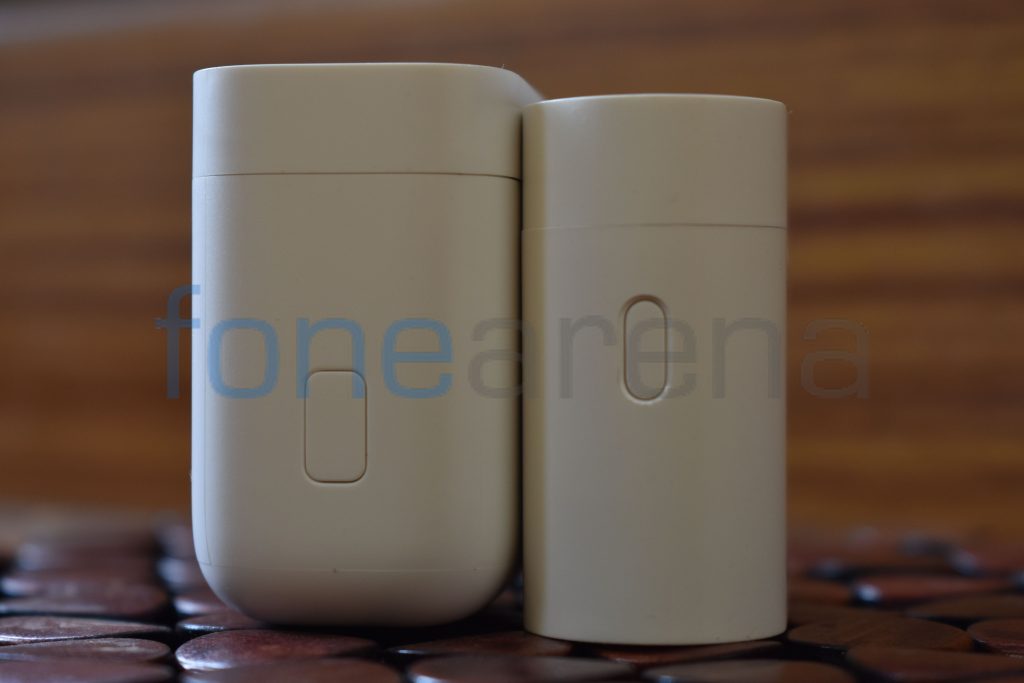 Compared to the first-gen Mi AirDots Pro, Xiaomi has improved the overall design, the charging capsule is now smaller, thinner and a lot easier to carry. It has a flat base as can be seen in the image above, due to which it doesn’t fall when placed on a flat surface that I observed a couple of times with the first-gen Mi AirDots Pro. The charging case has sharp edges which might not be preferred by all the users, but I personally don’t have any problem as such since I don’t carry it in my pocket. 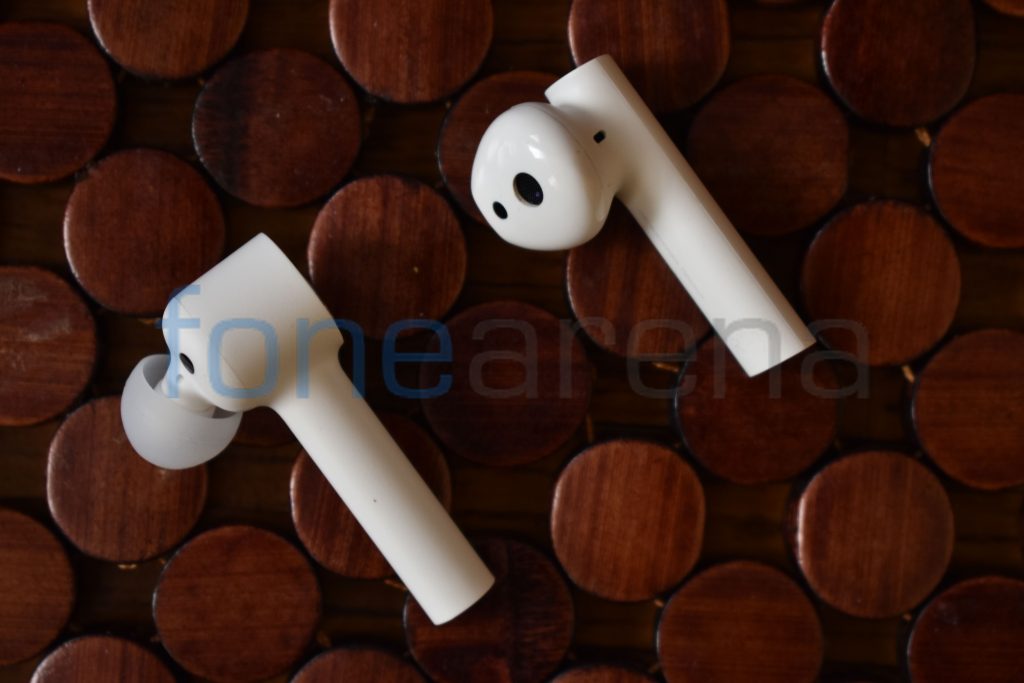 The earbuds are also made up of ABS plastic, due to which each earbud weigh just 4.5 grams. The earbuds feature half in-ear design similar to Apple AirPods and have a matte finish similar to the case. The earbuds, as well as the case, have an impressive built but just don’t drop it on a hard surface.

The earbuds are held tightly via magnetic pins inside the case, these do not fall off from the case even if you hold the case upside down. Mi AirDots Pro 2 features a half in-ear design compared to the in-ear design of previous-gen AirDots Pro. There is an LED on the charging case. 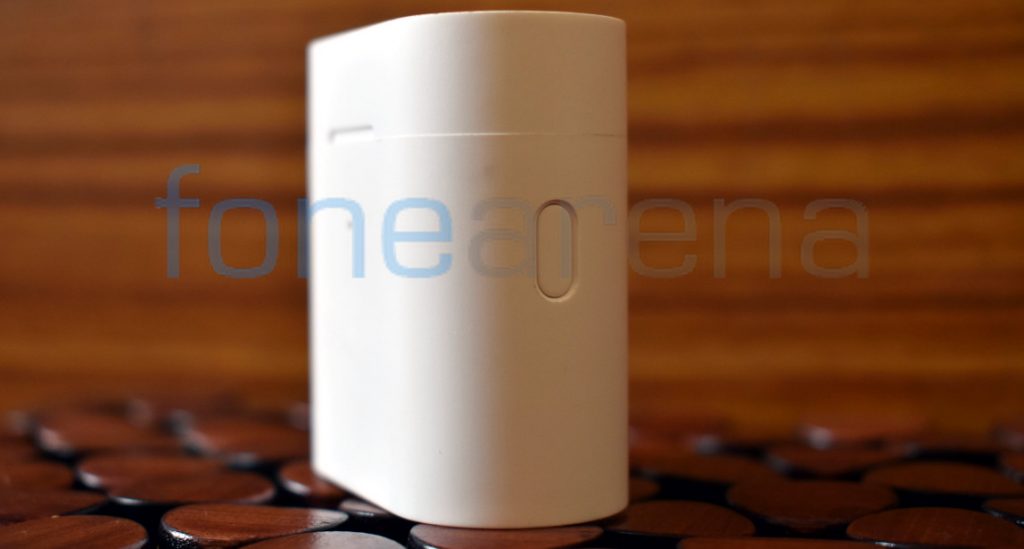 The earbuds do not feature any branding, Mi branding can be found on the back of the case along with charging and product specifications. These fit well in ears and do not fall off accidentally, the earbuds don’t fall off even if you shake your head, so there shouldn’t be any problem if you plan to use these while workouts or running. 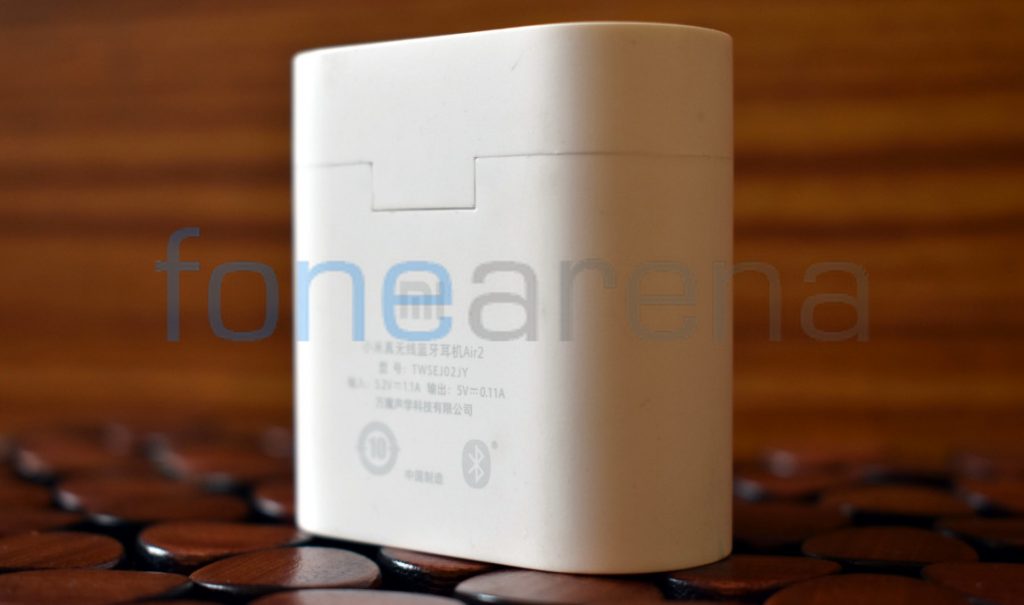 The Mi AirDots Pro 2 features IPX4 water-resistant rating, so there shouldn’t be any problem if you plan to use these while running or gym sessions. These earbuds are comfortable to use and can be used for long sessions without any trouble. 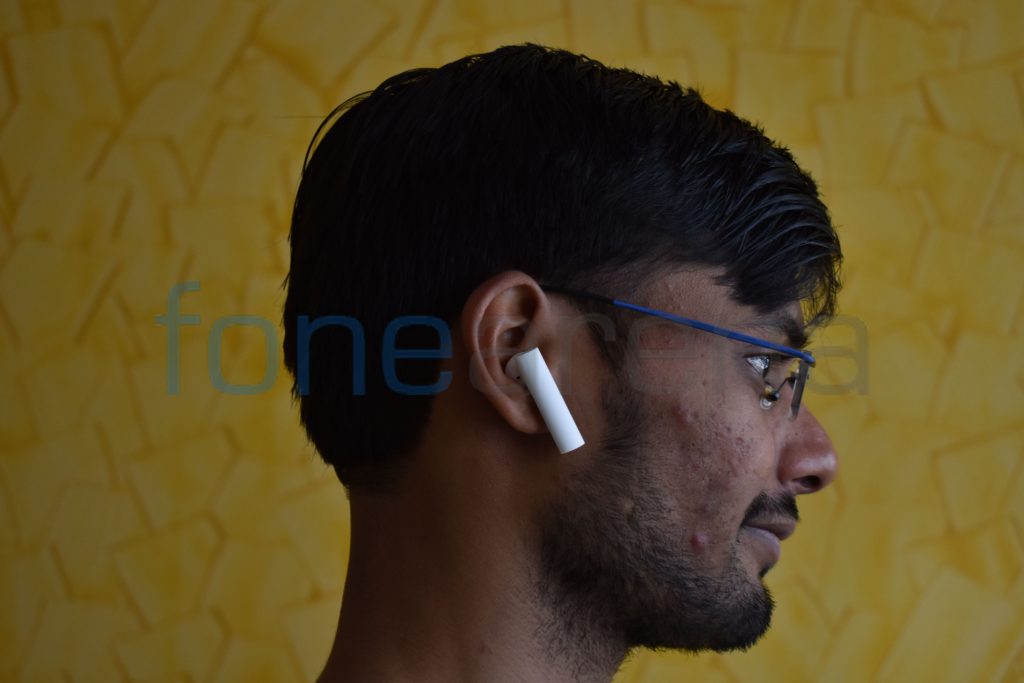 Mi AirDots Pro 2 is available only in white color as of now and it might be an issue for some since white picks up dirt easily. Overall, these are well-built pair of earbuds which is comfortable even for long duration with IPX4 water-resistant rating, but the half in-ear design may not fit everyone’s ear well. 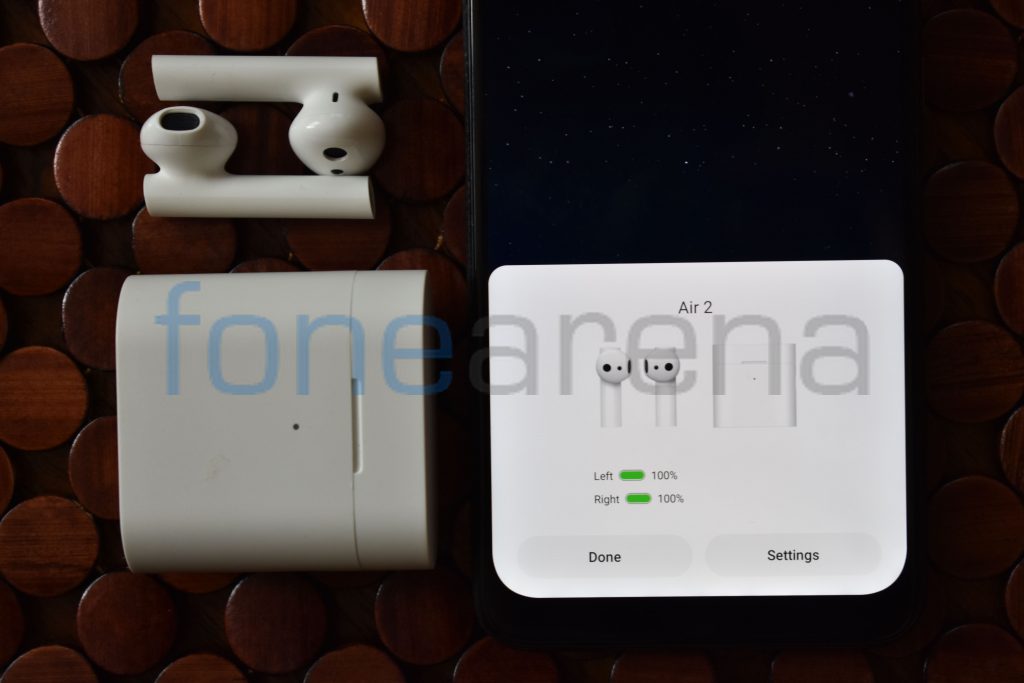 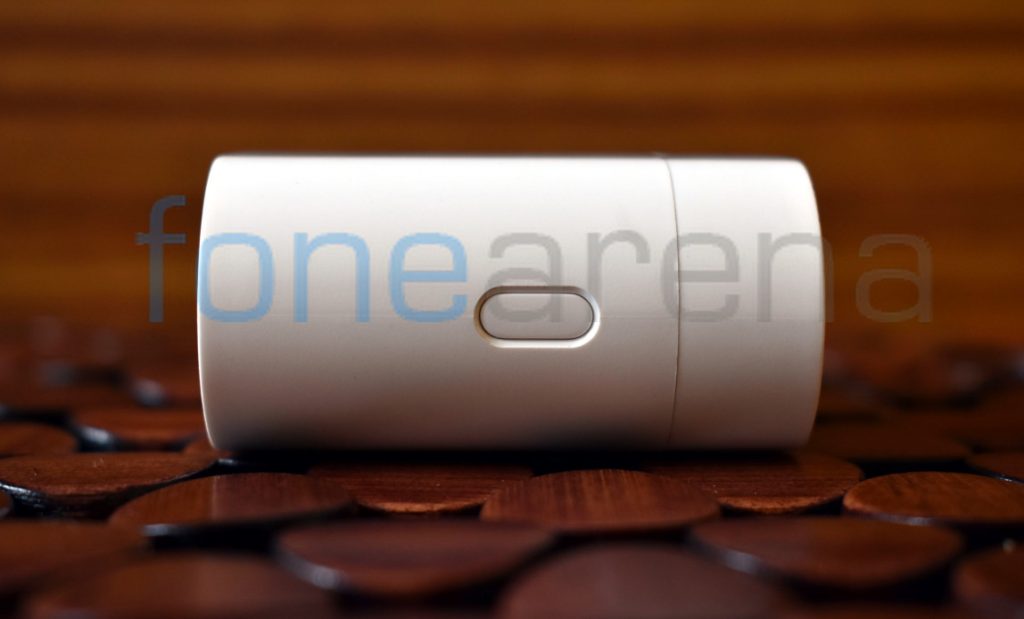 The pairing process is exactly the same as the first-gen Mi AirDots Pro, simply press the button on the right side of the case for 2-3 seconds, after which white LED on the case should start blinking, this means that AirDots Pro 2 is now ready to be paired to a device.

Open the case and search for a new Bluetooth device on your phone, it shows up as Mi True Wireless Earphones 2, connect to it. As soon as the connection is established, the blinking LED should go off. You can take the earbuds out of the case and start using it.

Once the connection is established, users can see the battery level of each earbud as well as the remaining battery on the charging case. This feature works on POCO F1, Redmi K20 series and Mi series devices, I found it working on my Redmi Note 7 as well but it didn’t work with Redmi Note 7 Pro.

The earbuds have a touch-sensitive area, double-tap on right earbud works as a play/pause button, and double-tap on the left earbud can be used to summon voice assistant. The double-tap on each earbud can be configured with the help of an app (we strictly advise users to not install the app on global including Indian units since Indian units have different firmware), which I found on this reddit post. Users can assign double-taps to jump between tracks, this app can be used to update the firmware as well.

It would have been nice if Xiaomi had developed a similar app in English as well since the Mi AirDots Pro 2 is now available globally including India, Europe, Indonesia, and other countries, but it looks like Xiaomi doesn’t have any plans for the same.

Mi AirDots Pro 2 can also be used to attend/disconnect calls, double-tap on either of the earbud can be used to pick-up/disconnect a call. The music playback stops as soon as either of the earbuds is removed from the ear due to the presence of an infrared sensor on each earbud. Music playback resumes as soon as you put it back in the ear, this is a new addition as compared to the first-gen AirDots Pro.

I have grown a liking for the touch pad implementation with time, but I wish Xiaomi had gone with a better implementation. There is no triple-tap functionality that we have seen on some earbuds, so there is no way to adjust the volume without reaching your phone. Overall, the pairing process is easy, the connection range is good, we hope that Xiaomi enables triple-tap gesture with future updates. 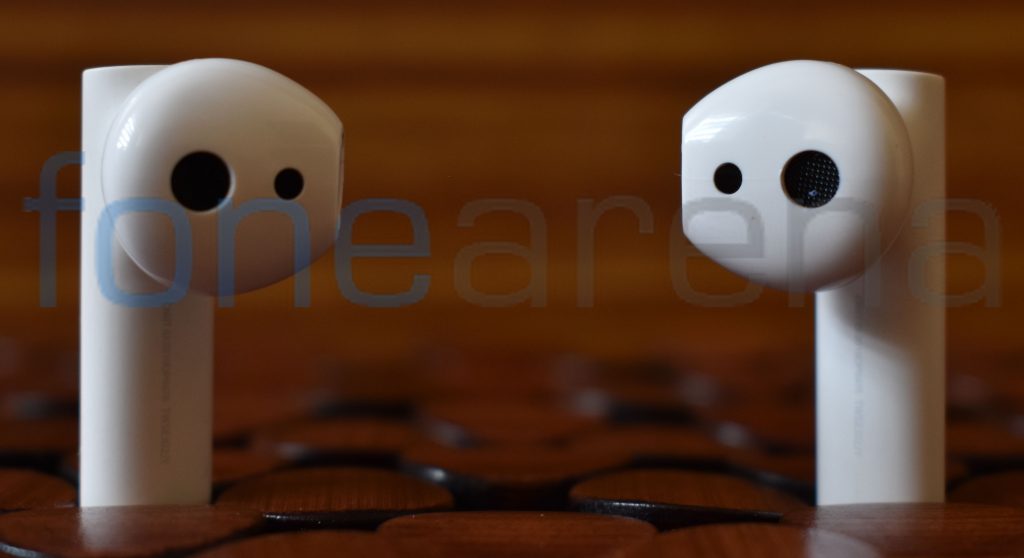 We had no complaints regarding audio quality at all, be it handling mids, treble, vocals or audio but bass heads will certainly find it underwhelming. Despite having larger drivers, I didn’t find the audio output loud enough, I mostly used these around at 80% volume, but even at 100% volume, you won’t face any rattling. 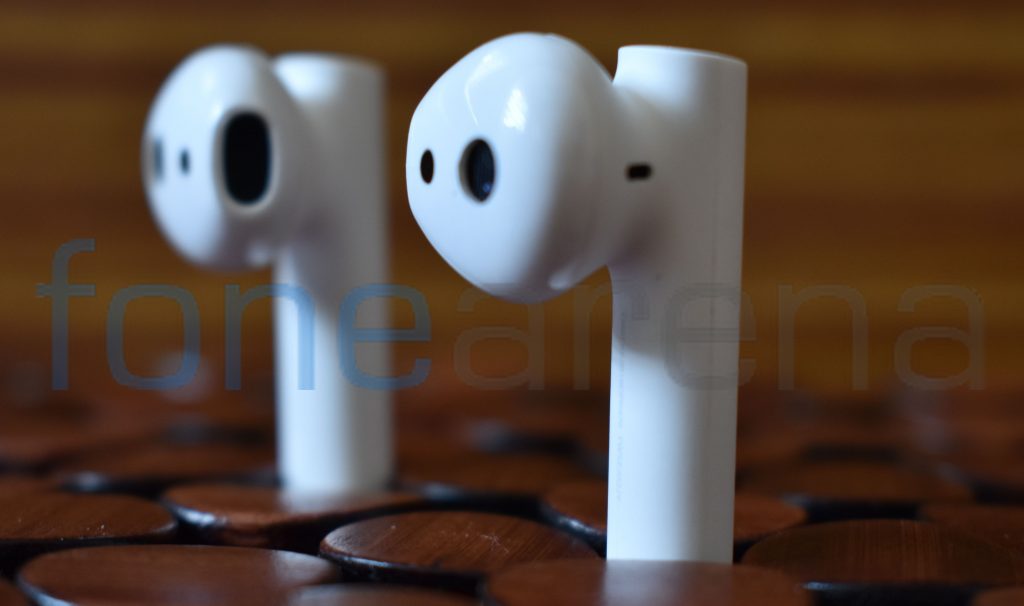 One of the issues I found with Mi AirDots Pro 2 was noise leaking due to the half in-ear design, play anything above 60% volume and the person sitting next to you will also be able to hear the same. I also noticed some latency as you would expect with any wireless audio product but nothing major, though it might be an issue if you plan to use these while playing battle royale games.

Interestingly, both the left and right earbuds can function freely thus providing a hassle-free sound experience. In case, if the user removes any of the earbuds from the ear, the second one keeps working in unilateral mode as well.

The call quality via Mi AirDots Pro 2 is good, thanks to the environment noise cancellation and secondary noise-canceling mic on the top of the stem. The primary microphone sits at the bottom of the stem, so it’s closer to the mouth and captures voice well. Even in a noisy environment, the person on the other end didn’t complain of the call quality and was able to hear me properly.

You can check the battery info of the earbuds in the status bar of your smartphone in case your device runs on Android 8.1 or later version of Android. Alternatively, you can also check the battery status of earbuds and charging case with the help of the app mentioned above in the Pairing and Controls section. 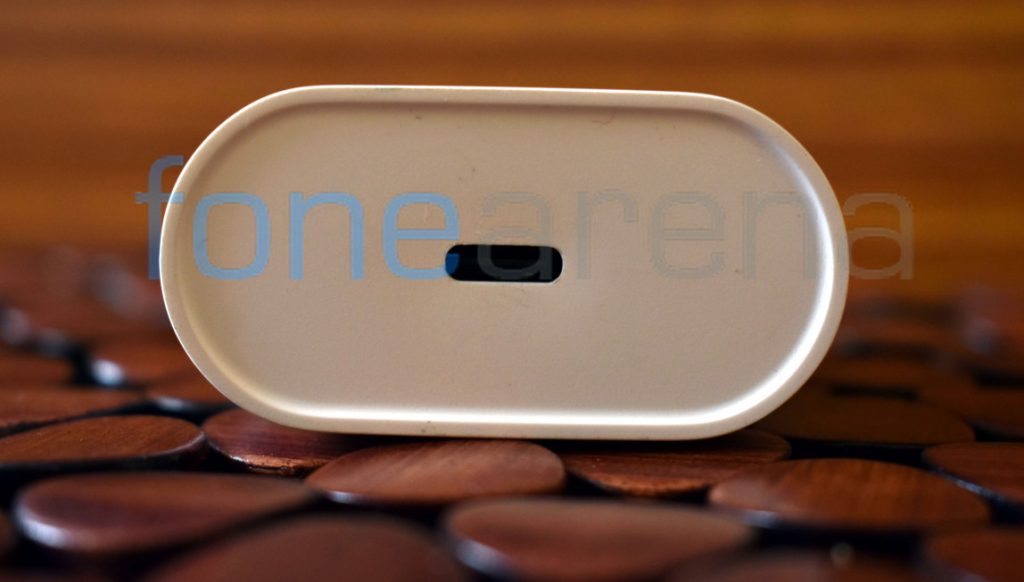 The earbuds start charging via magnetic pins as soon as they’re kept in the case, the earbuds took about 35 minutes to get fully charged from 0-100 during our testing.

The charging case takes about 1 hour to get fully charged, and can be charged using a USB Type-C cable. An LED light can be found on the case, the LED glows in red color while charging and LED goes off as soon as the case is fully charged. The case can charge the earbuds almost three times, so in total, you can expect a battery life of about 14 hours easily. 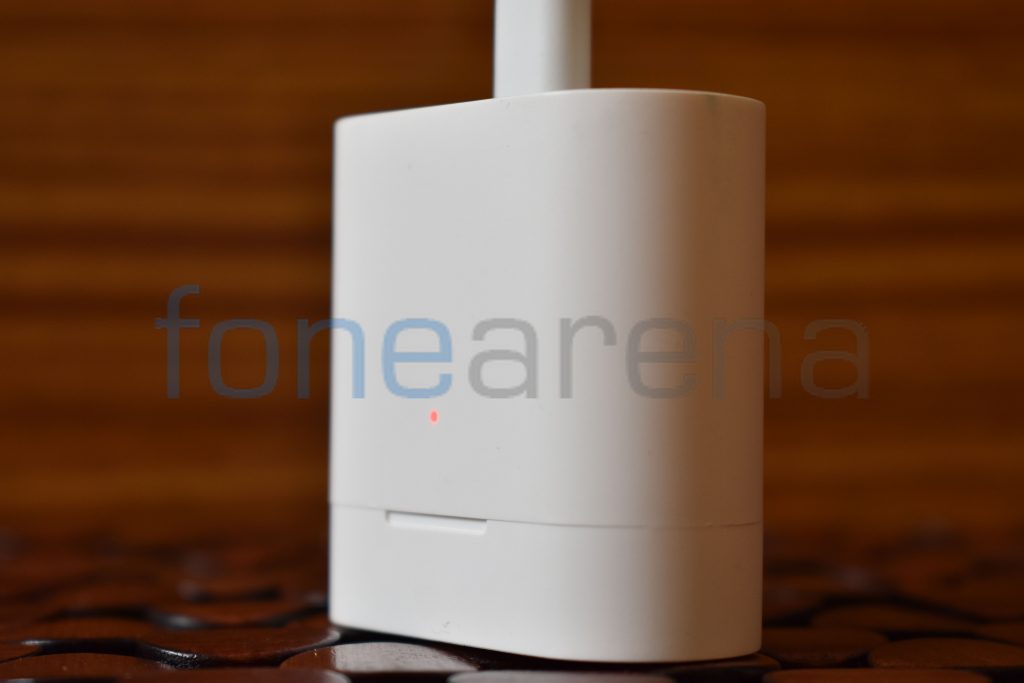 Overall, the battery life on the Mi AirDots Pro 2 is great and is an improvement over the previous-gen product. You can easily listen to music for 4 hours at 70% volume and when the batteries are drained, just drop the earbuds back in the charging case. Also, make sure to charge the case once in a couple of days. 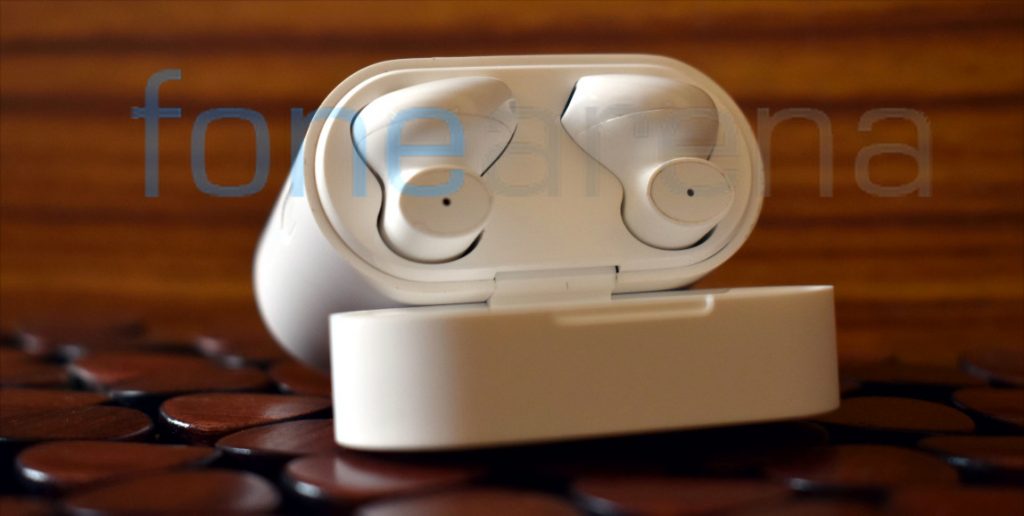 Mi AirDots Pro 2 is a worthy successor to the Mi AirDots Pro, with an improved compact design, better battery life and ability to jump between tracks but Xiaomi has made some weird choices here, be it dropping fast charge support, replacing Active Noise Cancellation with Environment Noise cancellation or half in-ear design instead of in-ear design found on the first-gen Mi AirDots Pro.

Overall, Mi AirDots Pro 2 is an excellent product, it is lightweight, has a compact design, is comfortable even for long sessions, and delivers a good audio experience along with great battery life. At this price, we think it’s worth considering and gets a recommendation from us. There is also realme buds Air at a slightly cheaper price, we will bring a comparison between Mi True Wireless Earphones 2 and realme buds Air soon.