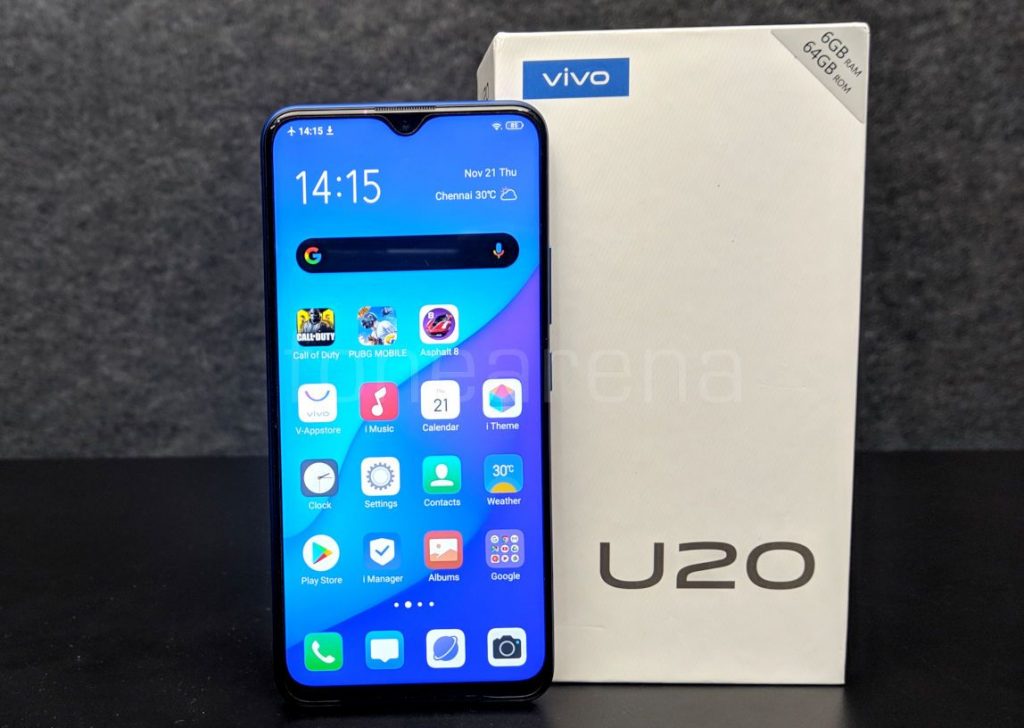 Vivo launched the U20, the company’s second smartphone in the U series in India recently. The successor of the U10 packs a powerful Snapdragon 675 SoC and packs a 5000mAh battery, and starts at Rs. 10990. Specifications look good on paper, is the phone good for the price? Let us find out.

We recently unboxed the smartphone. Check out the videos below. 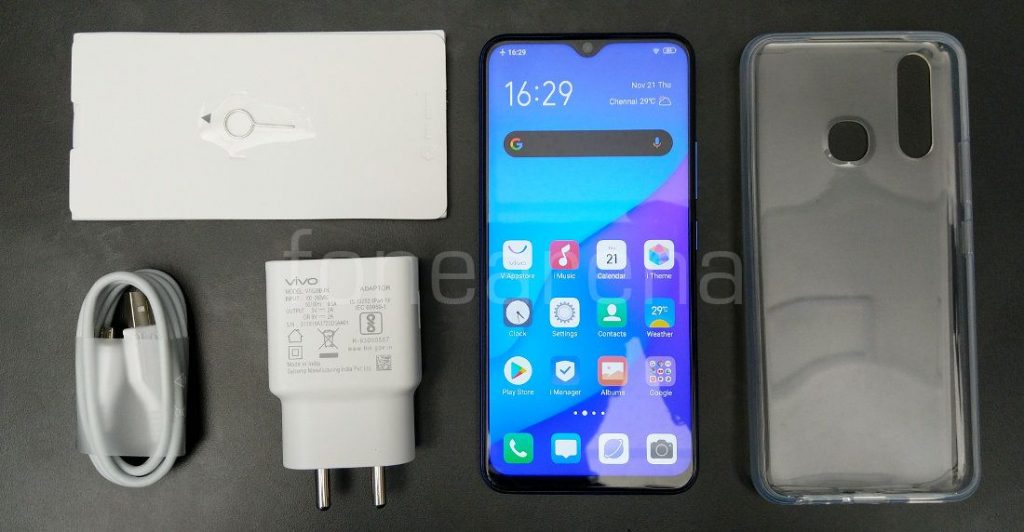 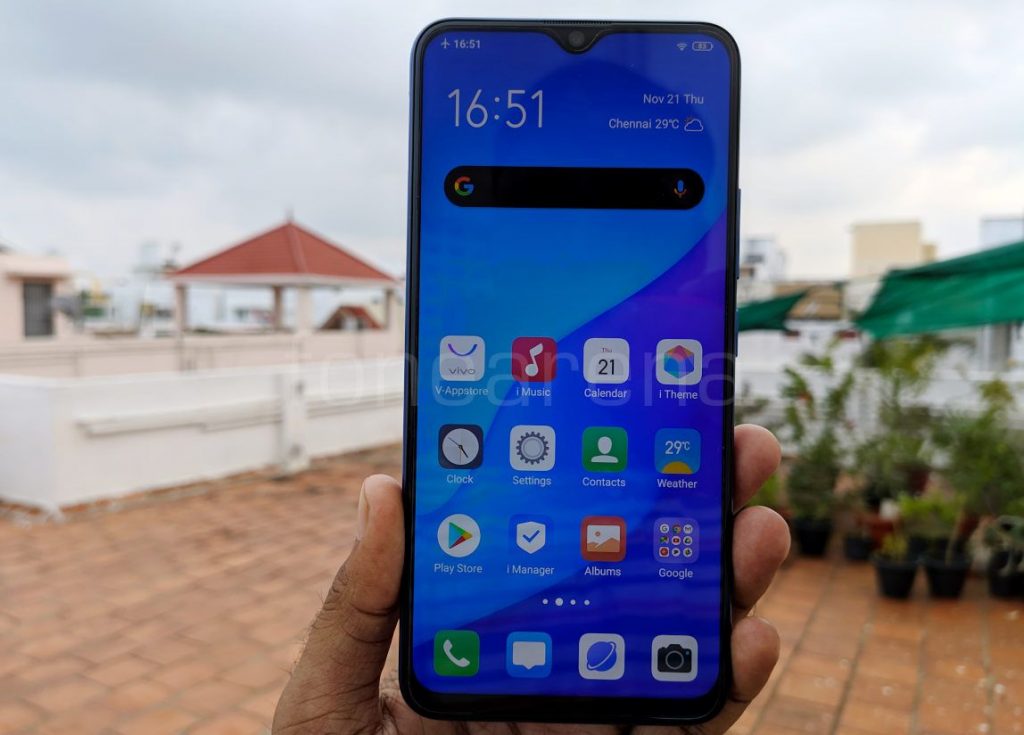 The phone packs a large 6.53-inch 19.5:9 In-cell LCD 2.5D curved glass screen. It is a Full HD+ screen with a pixel resolution of 2340 × 1080 pixels and a pixel density of about 394 PPI. It has slim side bezels, so it is easy to hold. The display is bright and the colors are vibrant, and sunlight legibility is good as well. Overall the display good with minimal bezels on the sides and the bottom. The company says it has Panda MN228 display protection that scores 700 on the Vickers hardness test results.

You can adjust the display color temperature from the display settings, and there is also eye protection option that cuts out the blue light emitted from the smartphone that causes strain to eyes and also affect the sleeping cycle. There is also a dark mode option that changes the phone UI and UI of the built-in apps and some third-party apps to dark, but this looks weird in apps like WhatsApp and Facebook that don’t have Dark mode option yet.

Vivo has finally added an option to change the shortcut center control operation with new drag from top right side, in addition to drag from bottom. 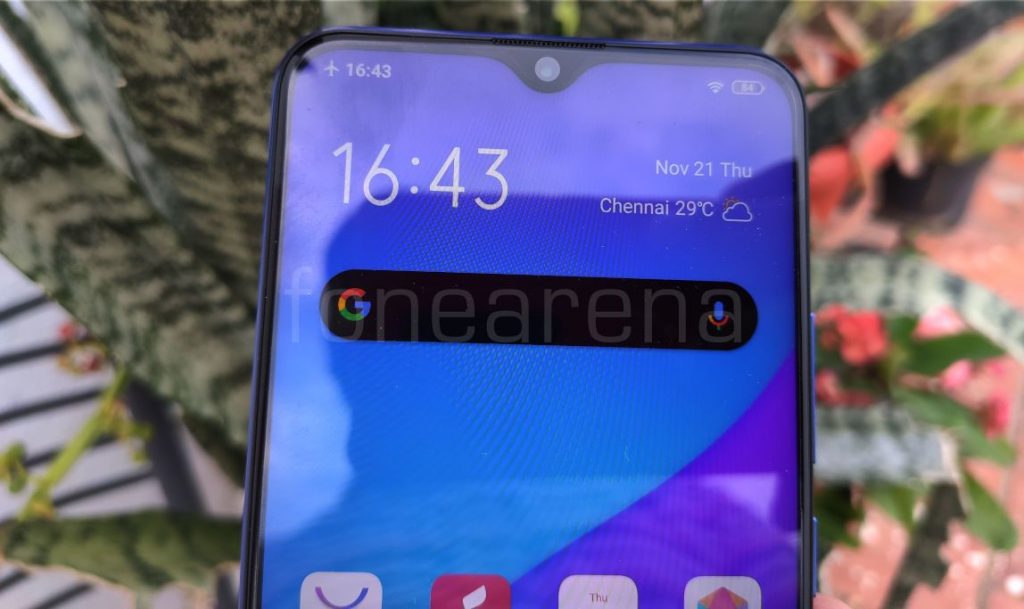 Above the display there is an earpiece on the top edge. There is a 16-megapixel camera with f/2.0 aperture. The proximity sensor is present on the top bezel on the right side of the screen, next to the earpiece. It also has a gyroscope and a magnetic sensor, otherwise known as a magnetometer. The phone doesn’t have a notification LED.

Coming to the button placements and slots, the power button and the volume rockers are present on the right side. On the left there is a dedicated dual SIM and microSD slots, arranged in a single tray.  On the bottom there is a 3.5mm audio jack, microphone, micro USB port and the loudspeaker grill. 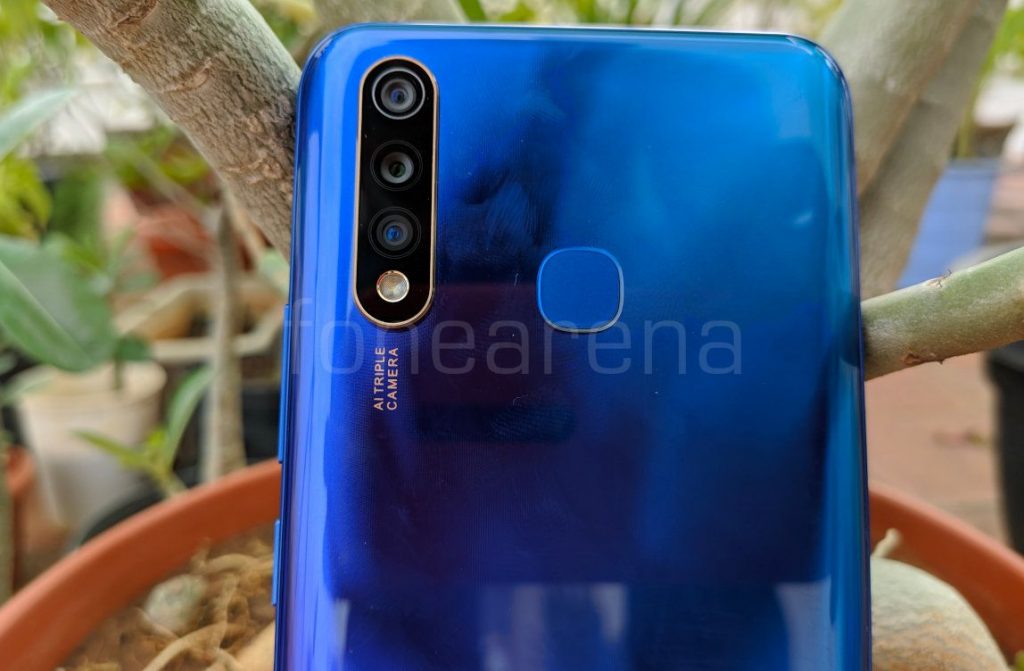 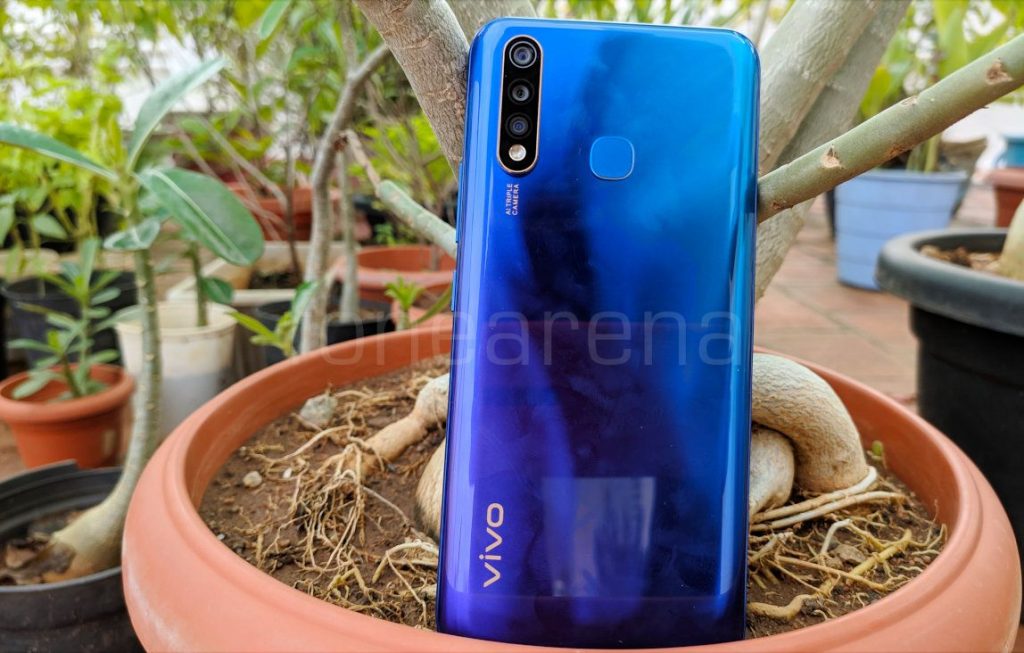 The back cover has a glossy finish with gradient look. It looks premium and feels solid in hand, but it can attract fingerprints easily. The location of the camera strip has a small bump, but it is minimal and is not noticeable when you use the case. The clear protective case which comes bundled with the phone offers good protection. We have the Blaze Blue color version, and the phone also comes in Racing Black version. 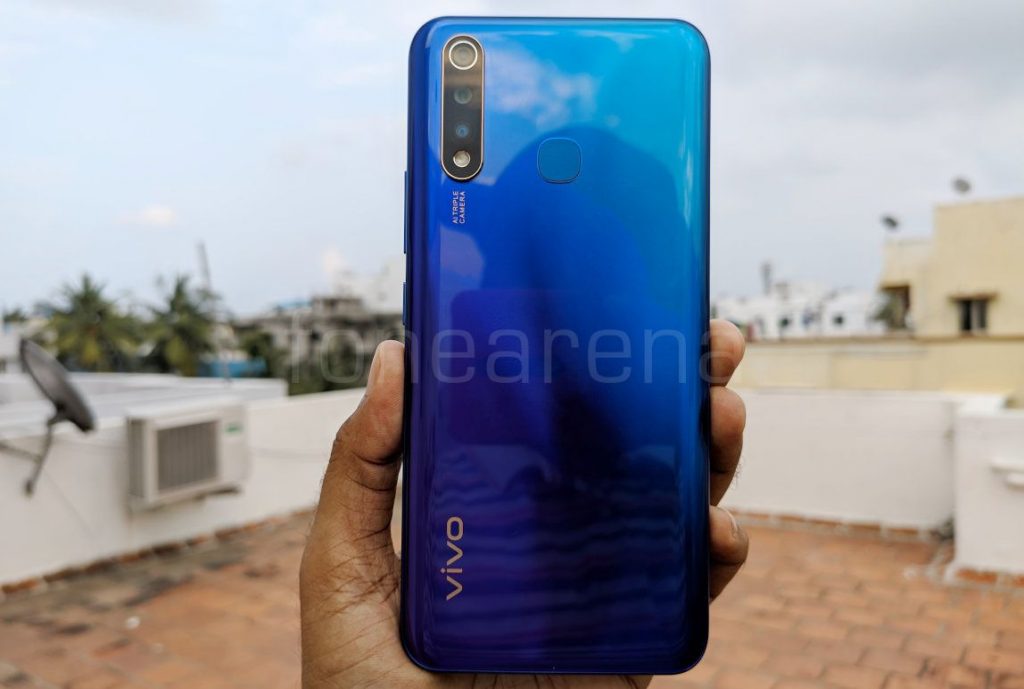 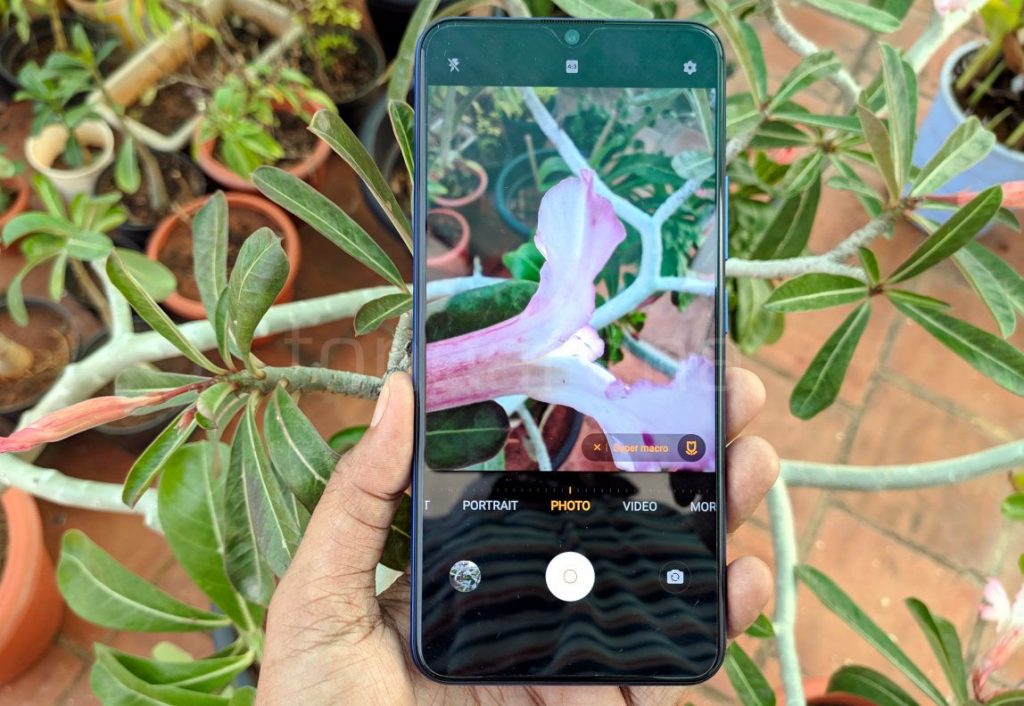 The camera UI is simple with toggles for flash, HDR, Filters, aspect ratio selection along with settings button, which is a new button that has all the options, unlike the earlier Vivo phones. On the bottom there is an option to switch between ultra-wide camera and super macro. Below that there is an option to switch camera modes that include Night, Portrait, Photo, Video, and more option, which has Panorama, Live Photo, Slo-mo, Time-Lapse, Pro (To manually adjust Exposure, ISO (up to 3200), Shutter speed (1/12000 to 30 seconds), white balance and focus), AR Stickers, Jovi AI and Doc mode. Below that there is an image preview button, shutter key and front and rear camera toggle. The phone also supports Camera2 API by default so Google Camera ports for advanced editing, but it doesn’t support RAW capture.

Coming to the image quality, day light shots are good, and it is recommended to enable HDR option since it is out. The camera can focus quickly. Macro shots are good, and the wide-angle camera is useful, but the image quality is not the best since it uses a smaller 8-megapixel sensor. It offers 108° image capture after accounting for distortion, even though the phone 120° lens. Images are automatically optimized according, which is good. It doesn’t have a dedicated camera for portrait, so the software portrait bokeh blur is decent, but not the best in terms of edge detection. The 2MP macro camera only offers 4cm macro, so object gets blurred when you get close. It is better to shoot in 2x mode instead of macro. Low-light images are decent, but it has noise, and the night mode is better.

The 16-megapixel front camera is good. Front camera portrait uses software to blur the background, which is decent. It also has HDR support and AI beautification with a lot of customizable options. Overall, the camera is decent for the price, but it could have been better.

Check out the camera samples below (Click the image to view the full resolution sample).

It can record videos at 4k resolution at up to 30 fps and 1080p videos at up to 60 fps. Video quality is good. There is EIS, but it only works for 1080p videos. It also has 720p slow-mo and time-lapse options in the video settings and also lets you 1080p 30fps video using the 8MP ultra-wide camera. Check out the video sample below.

Coming to the software, the phone runs on Android 9.0 (Pie) with Android security patch for November 2019 and Funtouch OS 9.2 on top. Vivo keeps pushing updates frequently improving things, which is good. The company did not say when the phone will get Android 10 update. Compared to Funtouch OS 4.5 in older phones the Funtouch 9.2 comes with a new UI design and color combination. It also finally brings Search function in the Settings. It still has iPhone-like gestures and Jovi Smart Scene assistant when you swipe to the left showing several cards.  You can disable the navigation buttons and use gestures.

It has Motorbike mode that can auto reject calls and mute notifications, has smart wake, smart turn on / off screen, on-handed mode, app clone and a lot of features. The updated Game cube supports more functions, such as Prevent accidental touches and Game picture-in-picture and more. It has Smart motion functions such as smart wake, Air operation, Shake to turn on flash light, Smart remind and more. Since the phone doesn’t have notification LED and also doesn’t have AMOLED screen for always on feature, there is Flashlight Notifications option that when enabled Blinks for incoming calls, messages and event alerts when the screen is off.

Out of 6GB of RAM about 5.6GB is usable, out of which 4.48GB is free when the default apps are running in the background. Out of 64GB of UFS storage, 52.2GB is free out of the box. We got about 500Mbps sequential read speed on Android Bench.

Apart from the usual set of utility and Google apps, it comes pre-loaded with a lot of apps such as Facebook, WhatsApp, Gaana, Amazon, Dailyhunt, Opera, Paytm and WhatsApp. These apps can be uninstalled, but they come back after reset.

The phone has rear-mounted fingerprint sensor which immediately unlocks phone just by keeping your finger on the sensor. The phone also has face unlock that can unlock the phone in seconds by scanning 1024 facial points, but it is not as secure as fingerprint since it can be unlocked with a photo. It also doesn’t work if you use sunglasses or hats.

The default Music Player also has equalizer and DeepField sound effects. It doesn’t have FM Radio support. Audio through the speaker is good and it is loud, but it distorts a bit in full volume. Since the speaker is present on the bottom, audio doesn’t get muffled when the phone is on a flat surface. Audio through bundled earphones is good as well. This has Widevine L1 so that you can play HD content on Amazon Prime Video, Netflix and other streaming apps.

It has the usual set of connectivity features such as 4G, Wi-Fi 802.11 ac (2.4 + 5GHz), Bluetooth 5, GPS + GLONASS. It also has USB OTG support that lets you connect external drives. It also has Voice-over-LTE (VoLTE) support for Reliance Jio, Airtel and others and supports Dual 4G VoLTE that lets you use 4G on both the SIMs.

The dialer and messaging UI are similar to other Vivo smartphones. With the latest Funtouch OS update, Messages supports identifying malicious websites, risky links and other information. Since this is a dual SIM phone, you get the option to select either SIMs when calling or sending a text message. We did not face any call drops and the earpiece volume is good, even though it is present on the top edge. 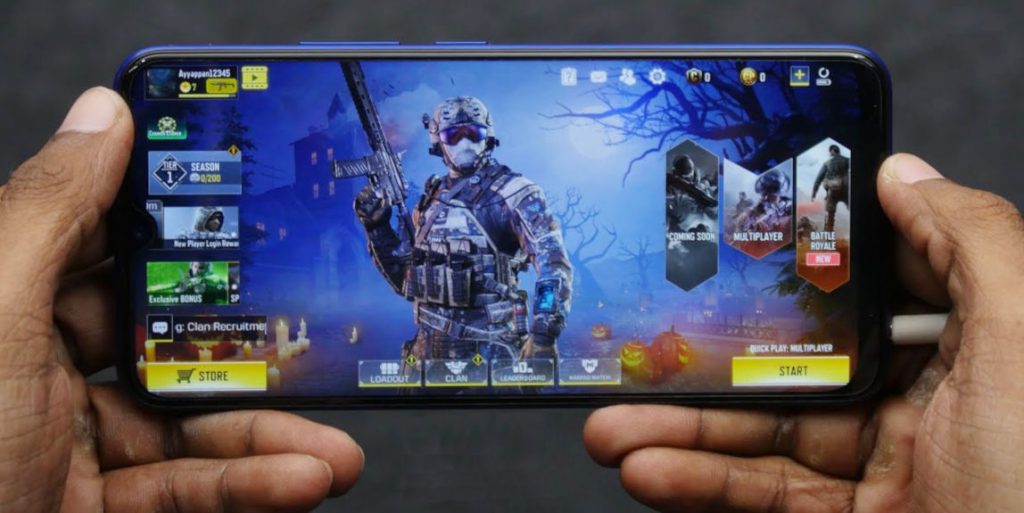 Coming to the performance, the phone is powered by an Octa-Core Qualcomm Snapdragon 675 64-bit 11nm Mobile Platform that has two Cortex A76-based Kryo 460 CPUs clocked at 2GHz per core and other six Cortex A55 Kryo 460 CPUs are clocked at 1.7GHz per core, comes with Adreno 612 GPU with support for Open GL ES 3.2, Open CL 2.0, as well as Vulkan graphics and 6GB LPDDR4x RAM.

Thanks to the larger Kryo 460 cores based on new Cortex A76, this is faster than the Snapdragon 710 that uses Kryo 360 larger cores based on Cortex A75. As you can see from the synthetic benchmark scores below, it is clear that the Snapdragon 675 SoC is better than the Snapdragon 665, however 710/712 is better GPU benchmark scores. We did not face any issues or frame drops in the graphic-intensive games, and PUBG works in full graphics. Vivo says that the phone comes with Multi Turbo that promises improvement in anti frame rate drop while playing games and better experience in commonly used apps. As usual there is DND Mode to disable backround notifications and calls. It doesn’t get too hot during intensive gaming and 4G data use. That said, check out some synthetic benchmark scores below. 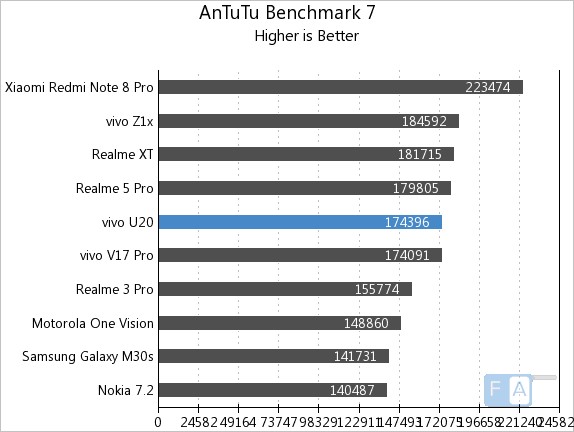 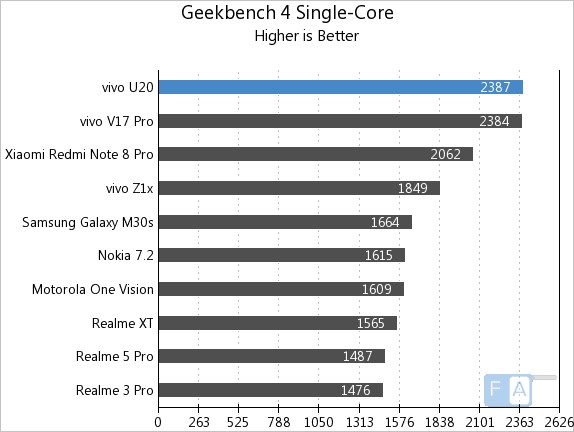 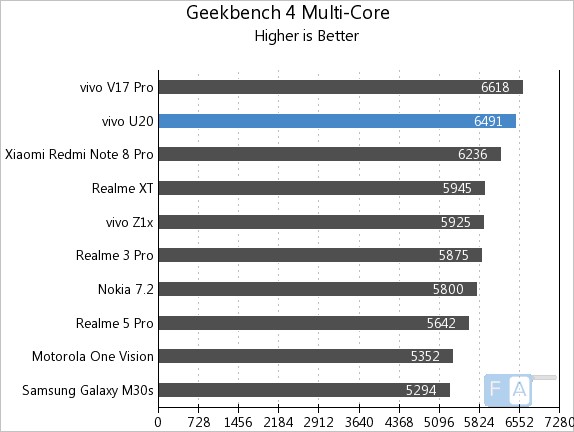 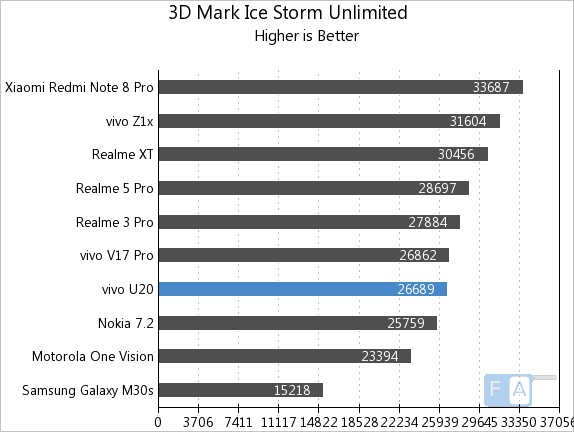 Coming to the battery life the 50000mAh battery offers lasts for a whole day even with heavy use and with average use it lasts for more than two days. In addition to the default normal mode, there is a low power mode that lowers the CPU and GPU frequency, screen brightness and more to improve the battery life, and there is also a Super Power-saving mode that only enables contacts, phone, messages and clock. Even in normal mode, the phone kills some background apps that consumes more power, so you have to change the option to allow the app to continue running in the background. 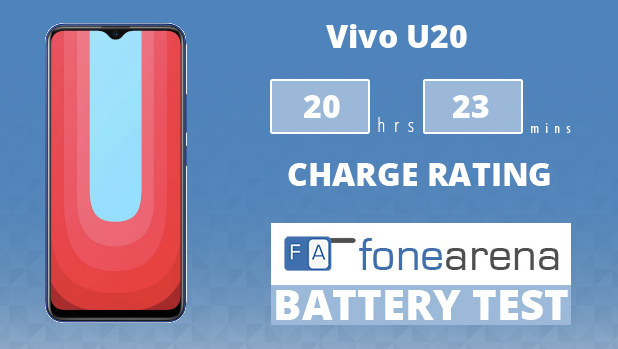 It achieved One Charge Rating of 20 hours and 23 minutes in our battery test, which is brilliant, and is almost similar to the Z1 Pro that also packs a 5000mAh battery. Since the phone has support for 18W Dual Engine Fast Charging, it takes about 2 hours to charge it from 0 to 100%, and 0 to 50% takes about 50 minutes. It also supports reverse charging that lets you charge other devices with the phone with a USB OTG cable. Even though the phone comes with support for fast charging, it has a micro USB port while some phones in the price range come with a USB-C port.

At the starting price of Rs. 10,990, the Vivo U20 is defintely a good smartphone with a good display with minimal bezels, Snapdragon 675 SoC that offers good performance, 5000mAh battery that offers brilliant battery life and decent cameras. However, you have to manage the phone’s UI and live with the micro USB port. Hope vivo will confirm their Android 10 update schedule for their phones soon.

Each and every phone have their own advantages and disadvantages. The Redmi Note 8 and Realme 3 Pro (After latest price cut) are the direct competitors to the Vivo U20 in the similar price range, and event last year’s Redmi Note 7 Pro is a good option since it offers 48MP camera and the same Snapdragon 675, but these don’t offer this good battery life. Even though realme 5s is there in the similar price range, it is hard to recommend it since it only has a HD+ screen and 10W charging.