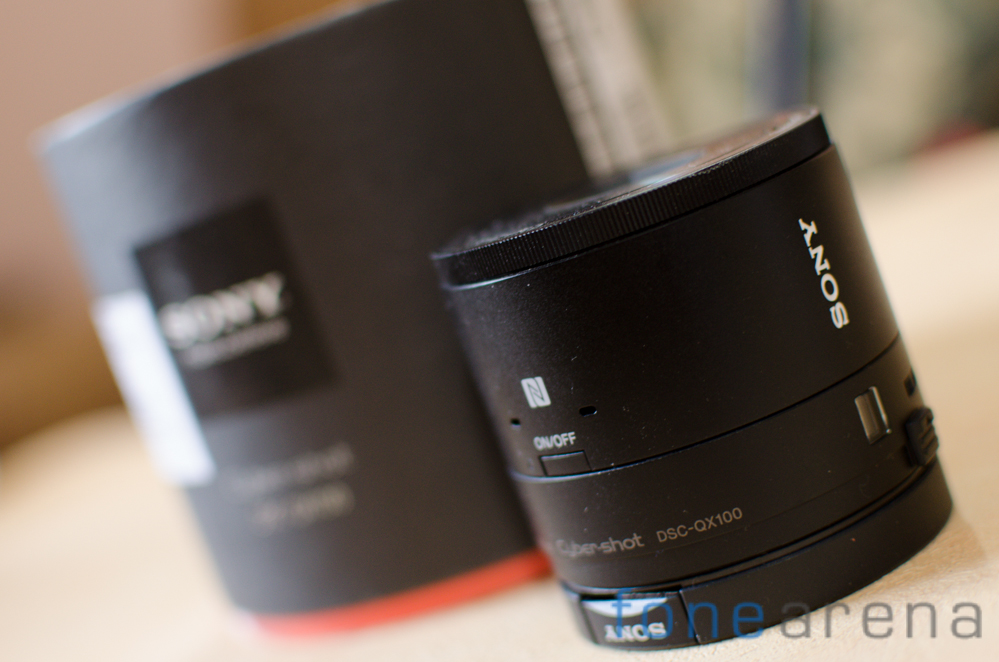 A few weeks back we’d talked about Sony’s spanking new smart lens accessory that complements your phone and gives it a camera that is a notch or two above what is possible with the inbuilt module. While the QX10 was pretty amazing in itself, the QX100 takes the concept to yet another level. With specs that at least on paper rival high end prosumer cameras, the QX100 certainly seems impressive but is it really ? We find out in our review.

There’s not much to talk about the design of the Sony QX100. It is essentially a cylindrical lens that includes a few additional buttons all around. 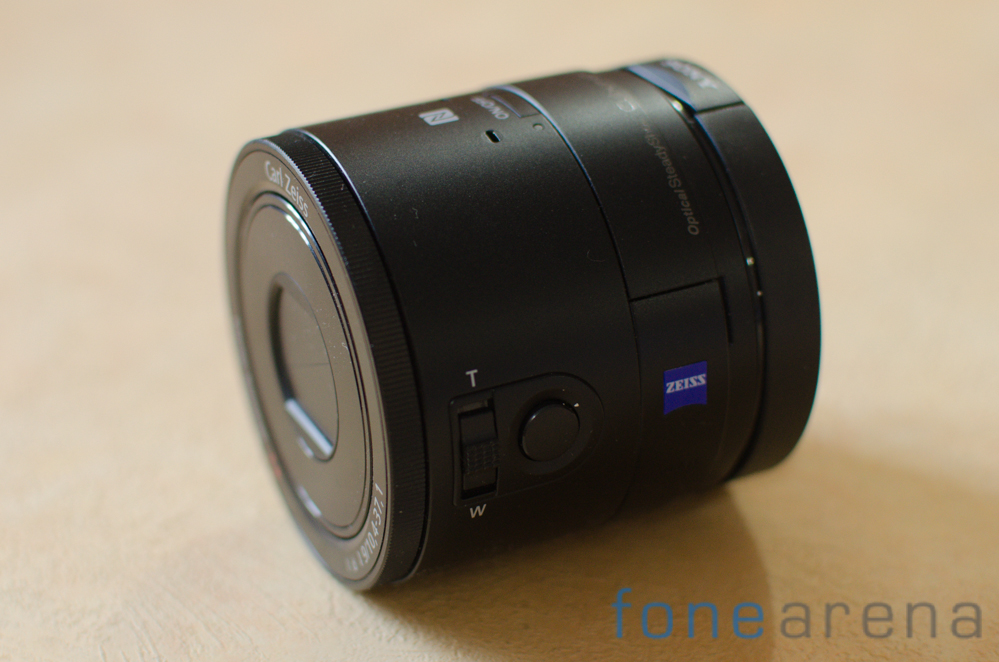 The on/off button is centered right on top of the lens. A long tap activates it and a green LED is visible whenever the lens is activated. Over on the left of the lens is where you spot the zoom rocker and shutter key. 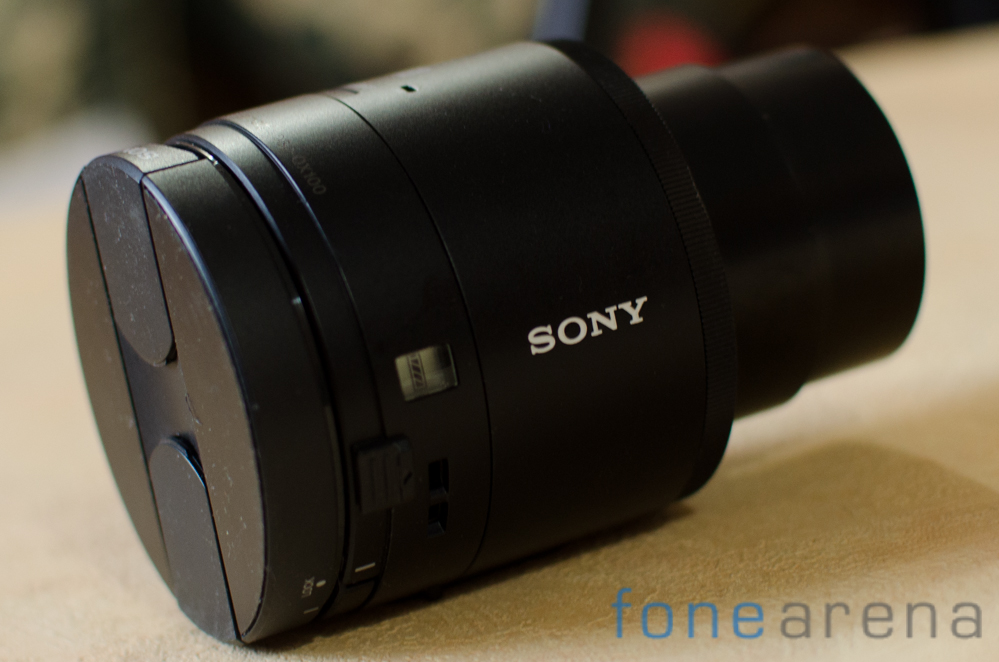 Like on the QX10, there is a miniature LCD on the right side of the lens that displays the battery life and little else. While we appreciate the presence of a battery notification on the lens itself, it isn’t the most accurate of displays and actual battery monitoring is a bit of a hit or miss. 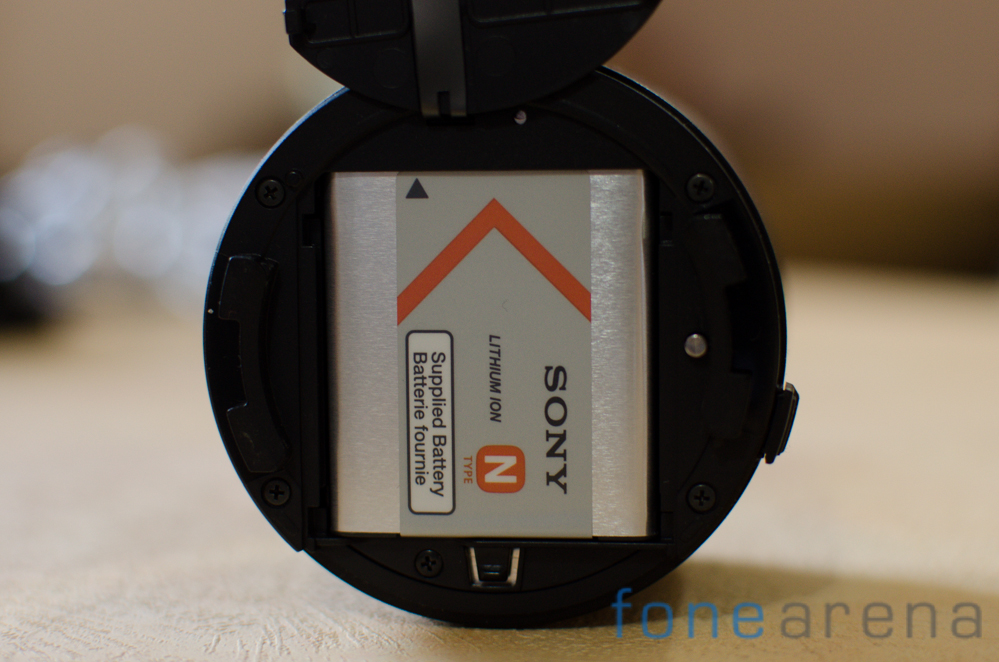 Battery life on the QX100 is rated for 220 shots but we could never get anywhere close to that kind of longevity from the SmartLens. During our testing, the maximum we could get was just about 150 shots and that too when we kept fiddling with settings to a minimum. 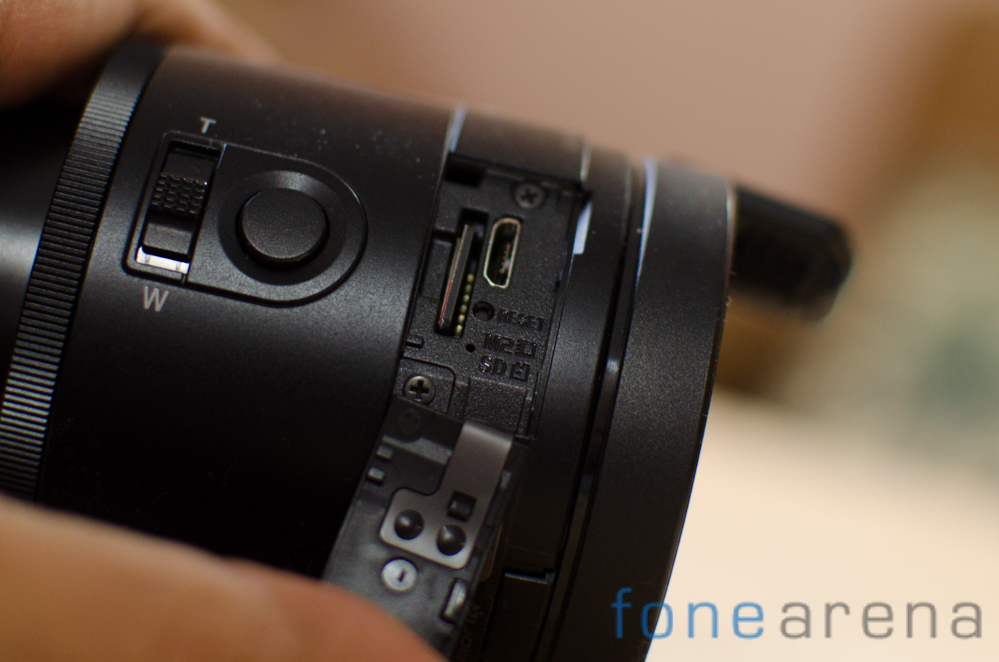 Over to the left, hidden under a flap are the microUSB and microSD card slots. Since the camera has absolutely no storage onboard and copying full resolution images over WiFi can be time consuming, you’ll be well served by installing a large microSD card right here.

Differences between the QX10 and the QX100 are vast. Other than the obvious size difference, the two lenses are largely different beasts under the hood. The QX10 has a 1/2.6″ sensor as opposed to the much larger 1 inch sensor on the QX100. Moving on to the lens, you get a f/3.5-5.9 G lens on the QX10 that corresponds to 10x optical zoom. On the other hand, you get a sharper f/1.8-4.9 lens manufactured by Zeiss on the QX100 and this corresponds to 3x optical zoom. The biggest advantage here of course is that at its widest, the QX100 with its f1.8 aperture will offer better, sharper shots with brilliant depth of field and much improved low light shots as well being a brighter lens.

The concept behind the camera is pretty simple. The lens creates a WiFi connection to which you connect your phone. Pairing the camera with the application on your phone is a simple enough process. Press the button on top and the camera switches on. You can now pair the lens with your smartphone using the PlayMemories application.   Once the initial pairing is done, you just have to switch on the QX100 and then tap the Play Memories app icon. Within a few seconds the phone will ‘see’ the lens and connect to it. You’ll now be able to see the view finder on the screen along with the basic controls.The entire connection procedure is less than optimal and takes a few more seconds than it really should. NFC pairing exists to make it easier to connect the phone with the lens but it doesn’t have much of an effect on the actual amount of time it takes to get started with the QX10. The application interface is minimalist in looks as well as functions. 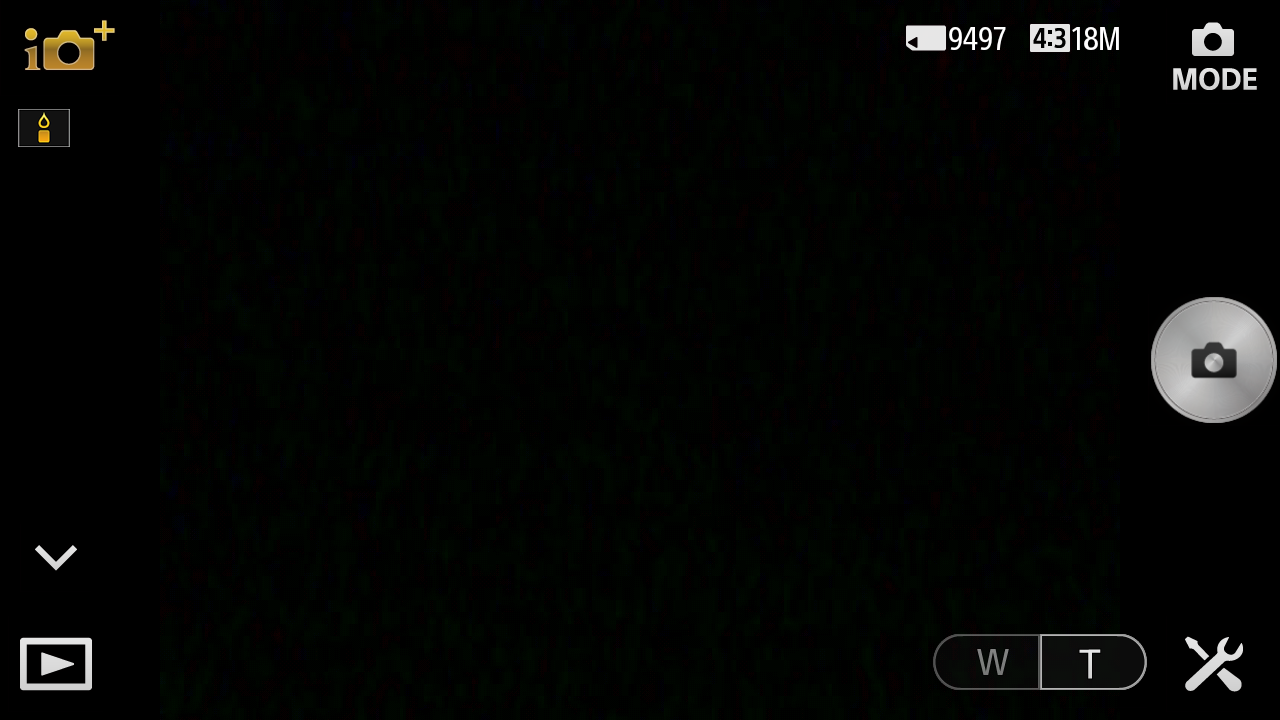 In the middle of the interface is the viewfinder window. The camera constantly pushes downscaled images from the lens to the phone over the WiFi connection. In our extensive experience with the QX100, the viewfinder suffered from dropped and occasionally, stuck frames when shooting in very windy situations or in conditions where WiFi connectivity was suffering from interference.   It is possible to control the zoom levels, switch between Intelligent Auto, Superior Auto and Program modes. Selecting Program Mode lets you adjust the exposure. Beyond that, controls are few and include only white balance adjustments and ancillary features like self timers, option to select the resolution. Between the two automatic modes, we couldn’t really find many differentiating factors. 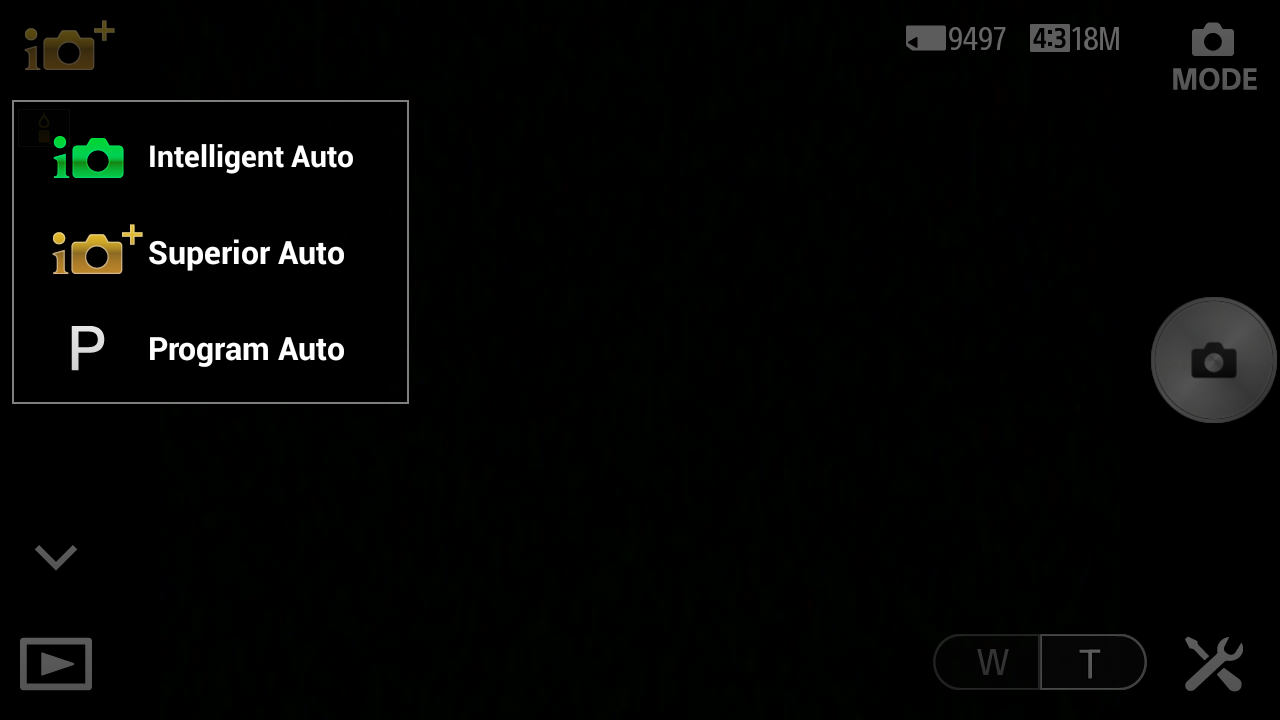 You can set the auto download image size anywhere from 2MP to Original. Given the size of the 18MP images, you’d be better served by setting it to 2MP to allow for faster shot to shot time. It is possible to set the capture size as well and you can select between 16:9 13MP stills and 4:3 18MP modes. The settings menu also lets you adjust the beep volume and lets you format the camera. This just about reaches the limit of the kind of control possible with the default software. The lack of controls is really one of the biggest complains we have with the system. 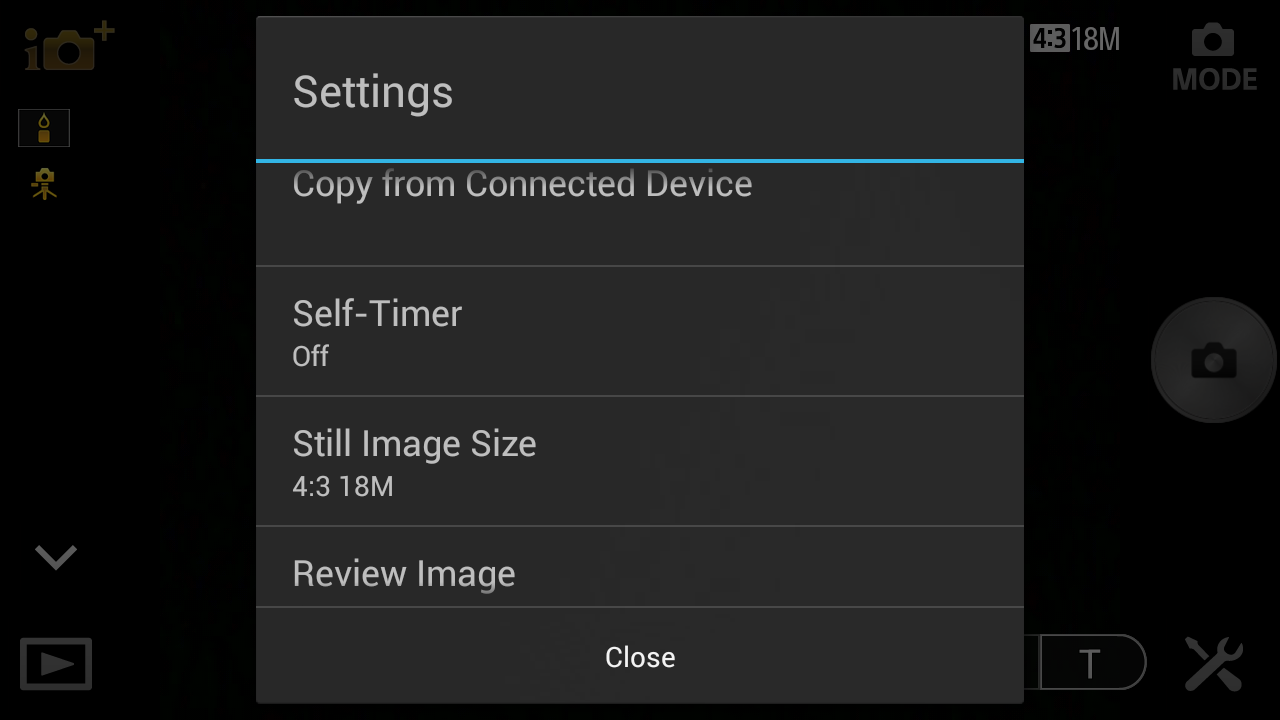 For a lens that has its roots in a fantastic camera like the RX100, the lack of full fledged controls means that you can’t really exploit its capabilities. A camera like the QX100 should hardly be restricted to point and shoot use but that is all that Sony allows you to do. Even with the extended APIs, apps like Camera 360 cannot get control over most aspects of the lens which makes the purchase hard to justify.

The benefits brought on by the hardware of the QX100 aren’t very obvious in brightly lit conditions. Any mid range and above phone will be able to produce shots that look just about as good as the QX100 unless you get down to pixel peeping. 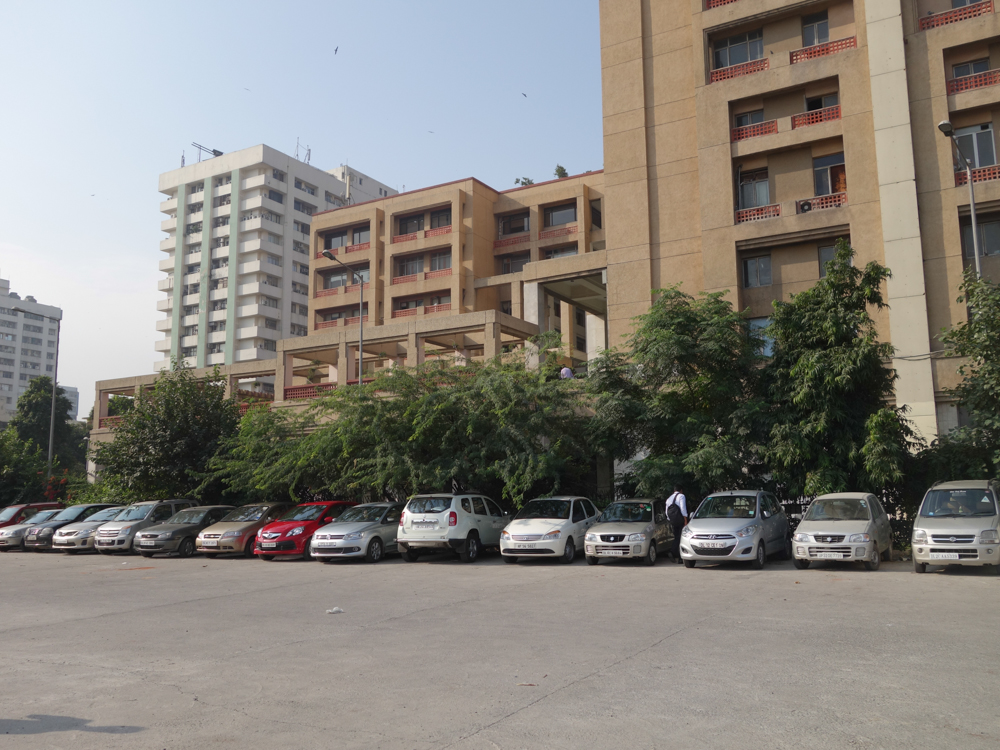 Of course, the differentiating factor brought on by the built in 3X zoom lens does add a level of versatility that can’t be had on most phones. The image below demonstrates just about how close you can get with the QX100 using the optical zoom mechanism. 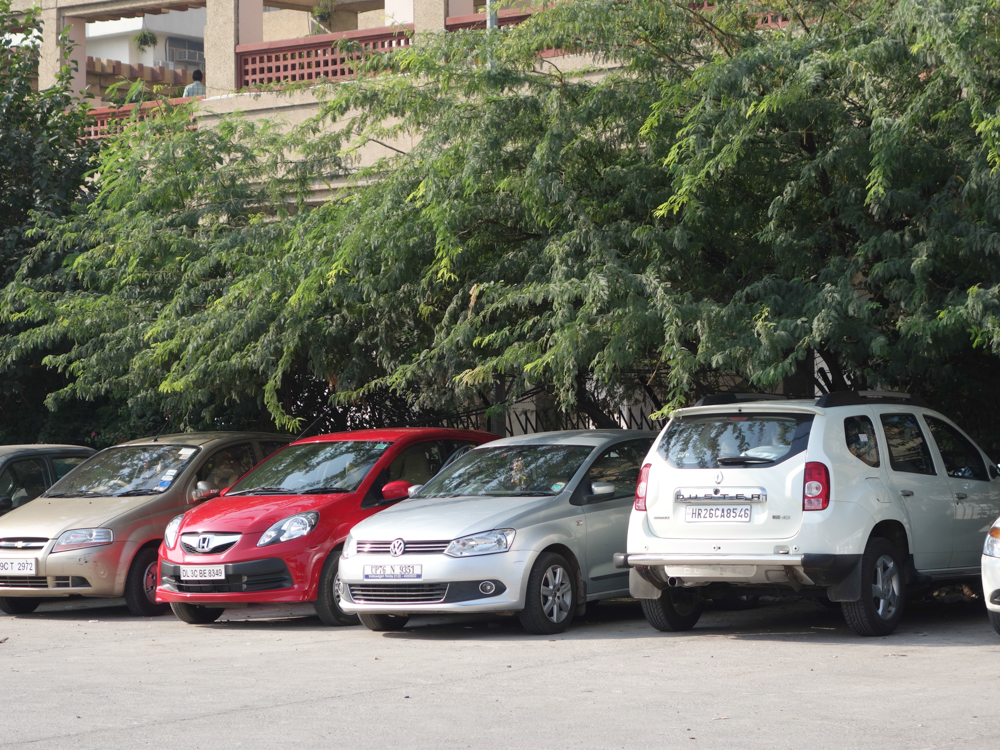 While the QX100 is most definitely an upgrade over the lenses built into most smartphones, we noticed that it didn’t perform quite as well as an RX100 despite packing very similar optics. Burn highlights weren’t hard to observe and day light shots aren’t appreciably better from a higher end smartphone camera as long as the lighting conditions are good. 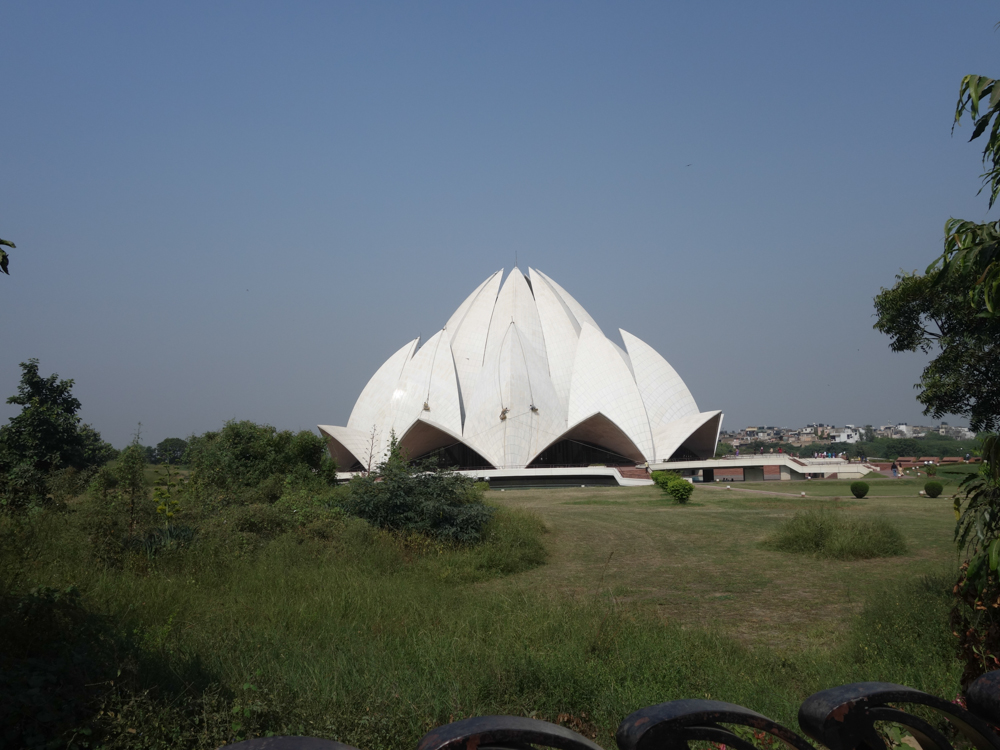 Interestingly, zooming into the same object solved the issue regarding blown highlights but at the expense of turning down the exposure and making the image look dull. This unpredictable behavior of the QX100 is visible in several other scenarios as well. 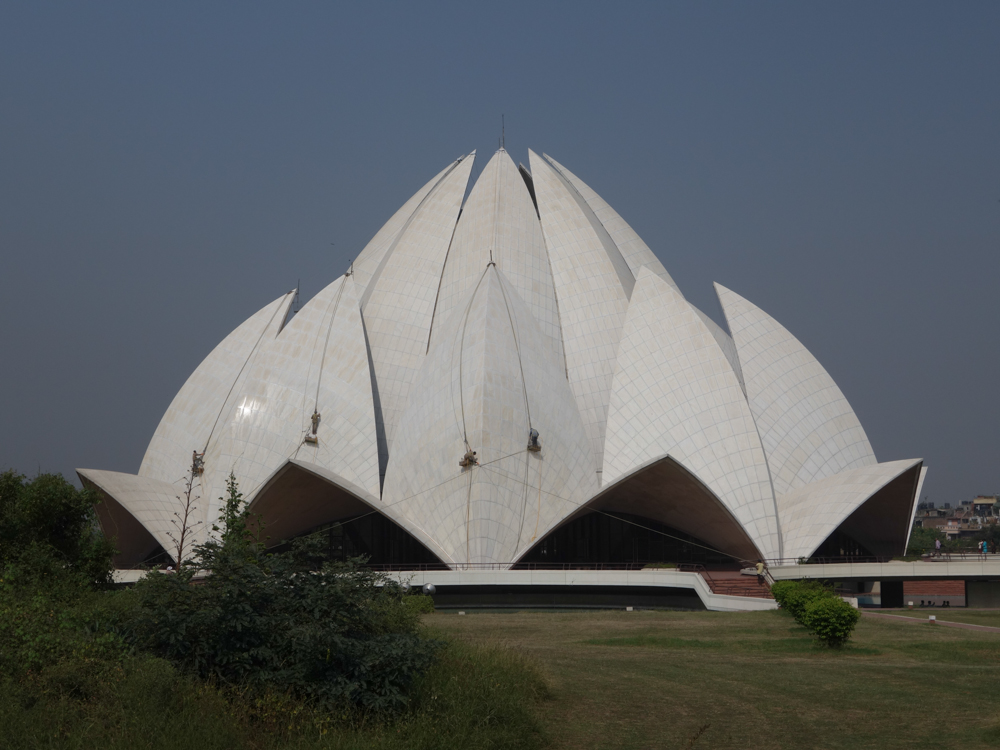 There’s absolutely no doubt that the images shot on the QX100 are practically noise free as can be seen in this 1:1 crop below. The camera retains the minutest of details and gives you a beautifully defocussed background without a hint of noise. 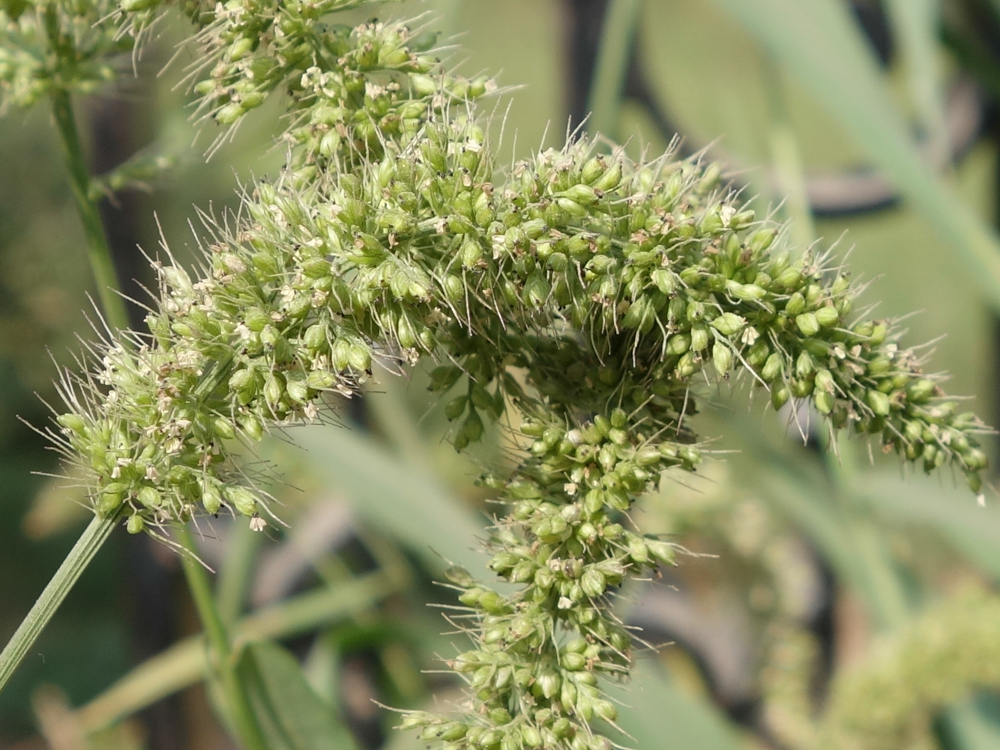 Low light shots are where the camera has the potential to really excel. The fast f/1.8 lens combined with the large sensor and Sony’s software tricks means that you can get some stunning shots that no smartphone camera can match. 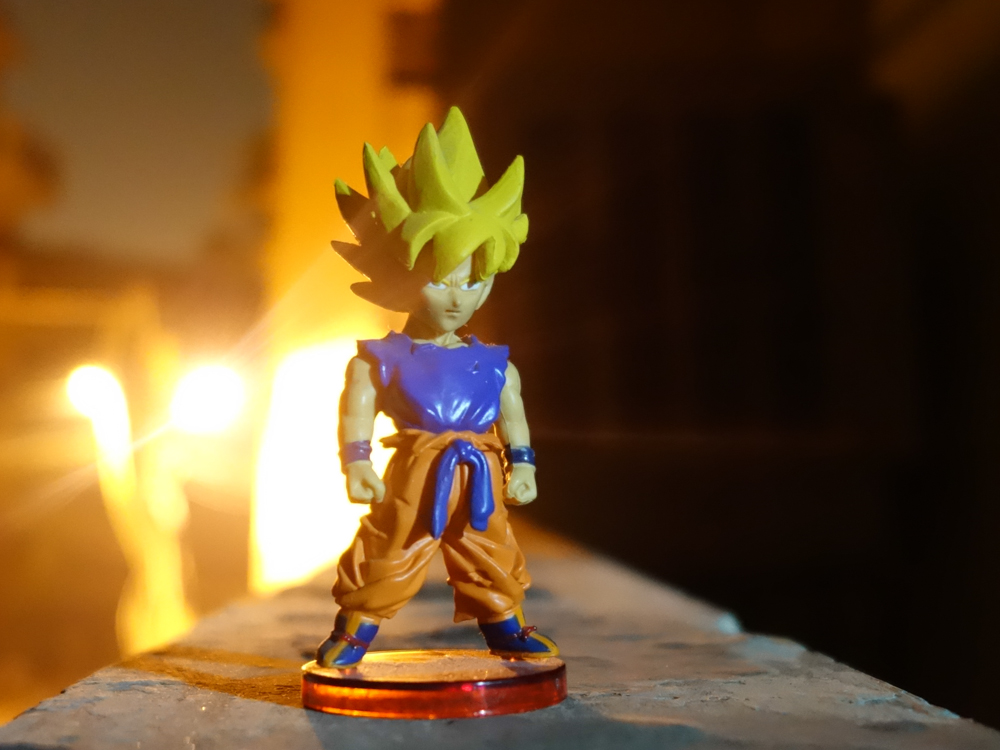 Hand held too, the images are quite satisfactory and pretty much noise free with the only concern being the lack of a flash. This means that you’ll have to hold the lens + phone arrangement very still to avoid taking blurry shots. 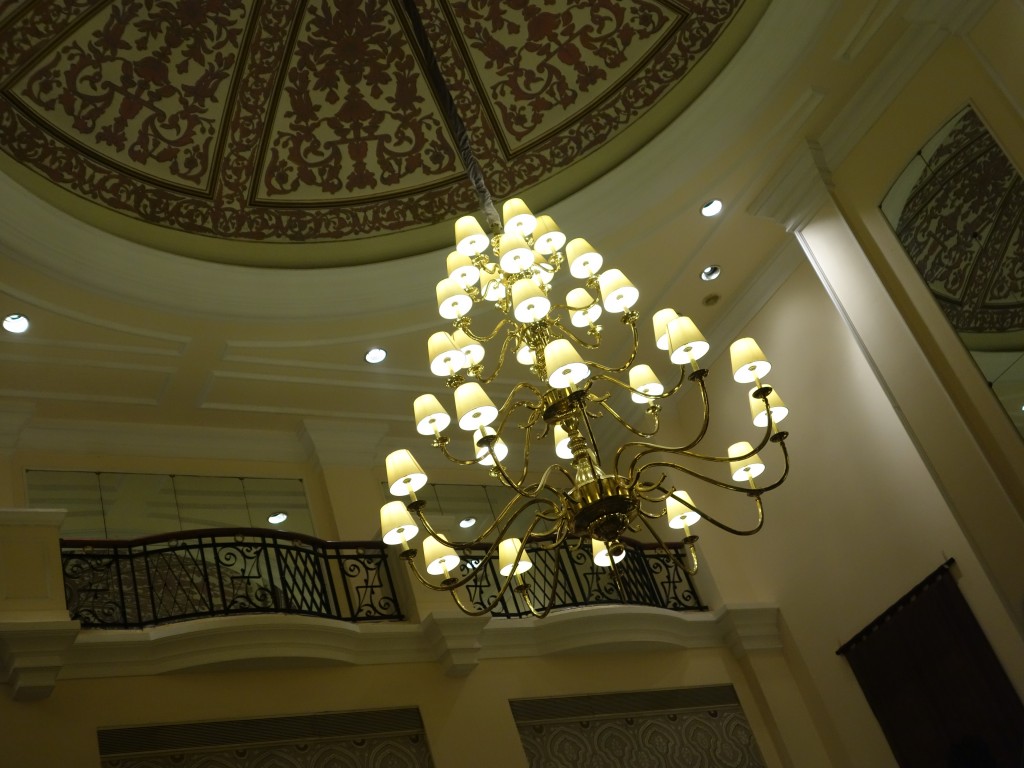 Depending on the ambient conditions, Sony’s Play Memories application takes multiple shots and combines them into one. This way it manages to avoid blurry images for the most part and is quite effective in low light. As above, the fast 1.8f lens helps in getting great night time shots thought we weren’t particularly happy with the automatic white balance selection. 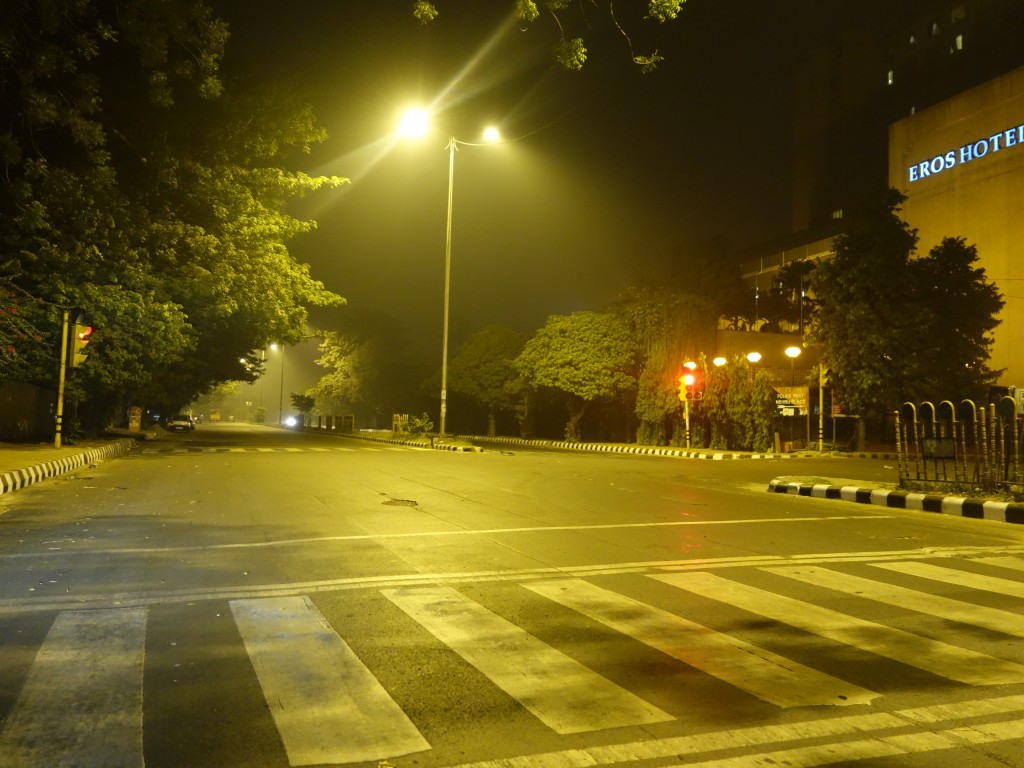 The lack of controls other than Aperture Priority also really hurt the prospects of the QX100. With the amount of imaging hardware that it carries, the smart lens has a lot of potential that is being thrown away  because of the lack of functionality in the software. There is no way to manually control most parameters. This is surprising because the full body equivalent of the QX100 ie the RX100 has complete manual controls. 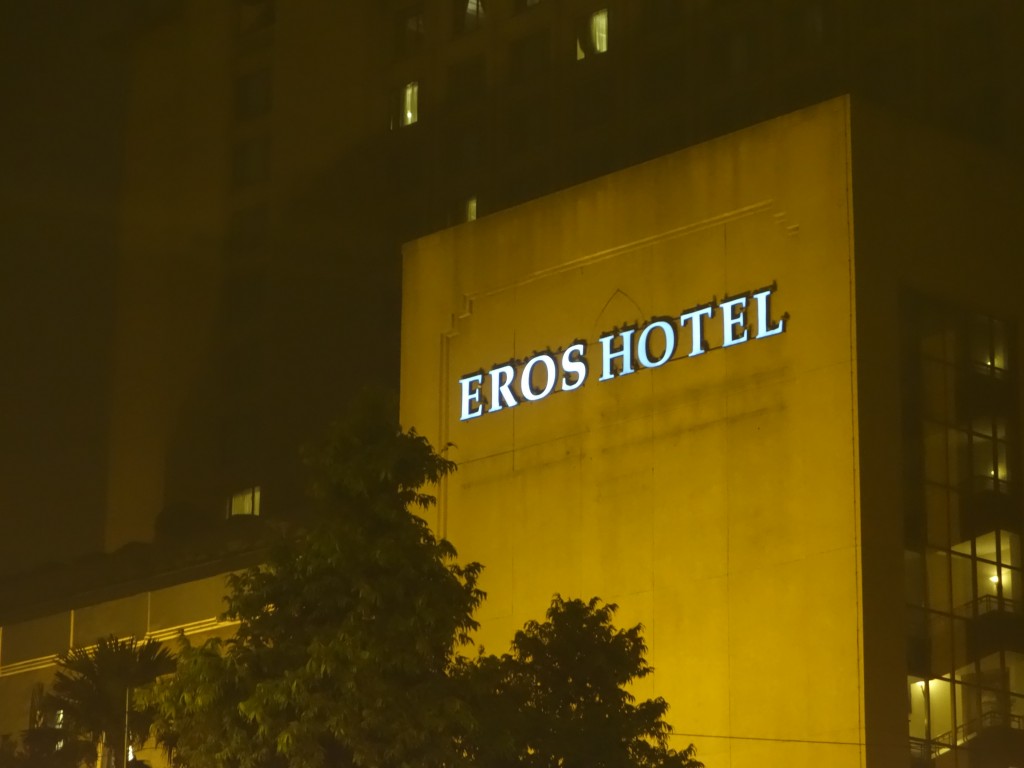 Zooming in to a shot in low light means that you’ll have to hold the camera very steady as the aperture drops to f/4.9 which makes taking stable shots quite hard given how light the entire system is. You’d be best served by making use of the tripod mount provided.

The QX100 is a compelling tech demonstration but the size and lack of accompanying software capabilities really puts us off. The portability question is a bigger issue here than on the QX10 that was diminutive enough to slip into a pocket. The large dimensions of the QX100 mean that you just cannot slip it into a pocket or keep attached to your phone for any appreciable amount of time. The heavy weight of the lens also tends to tip the phone forward. 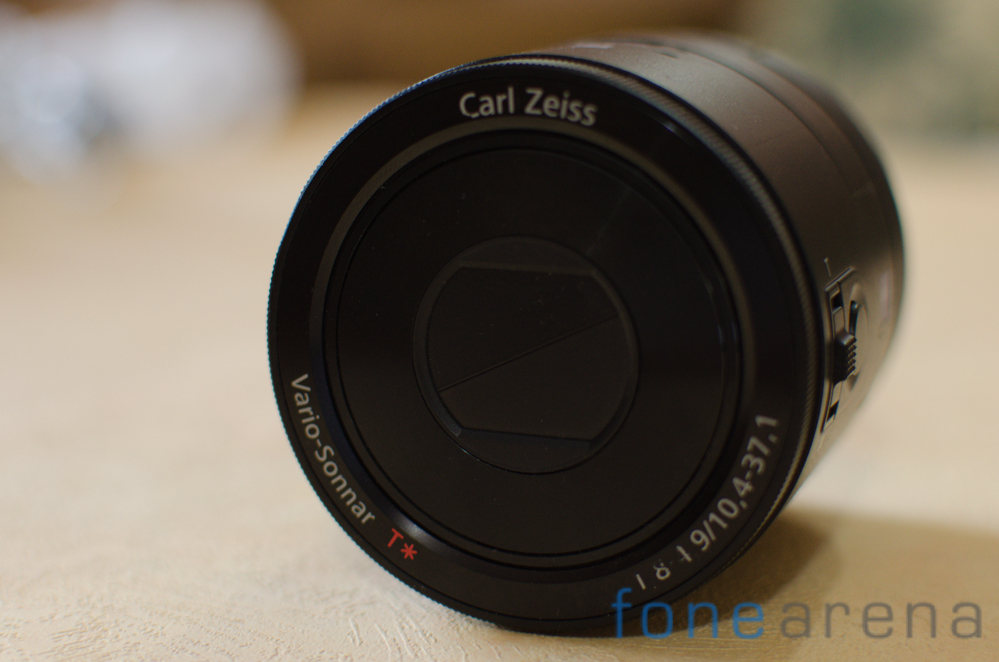 There is no doubt that the image quality on offer far surpasses any phone and for that matter anything that’ll come up in the near future but the tradeoffs are just not worth it. The price too is on the higher side which means that we’re not too keen on recommending the QX100 unlike the QX10 that we really liked. We’d also recommend that you read our Sony QX10 review if you are interested in smart lenses.

Software lets it down