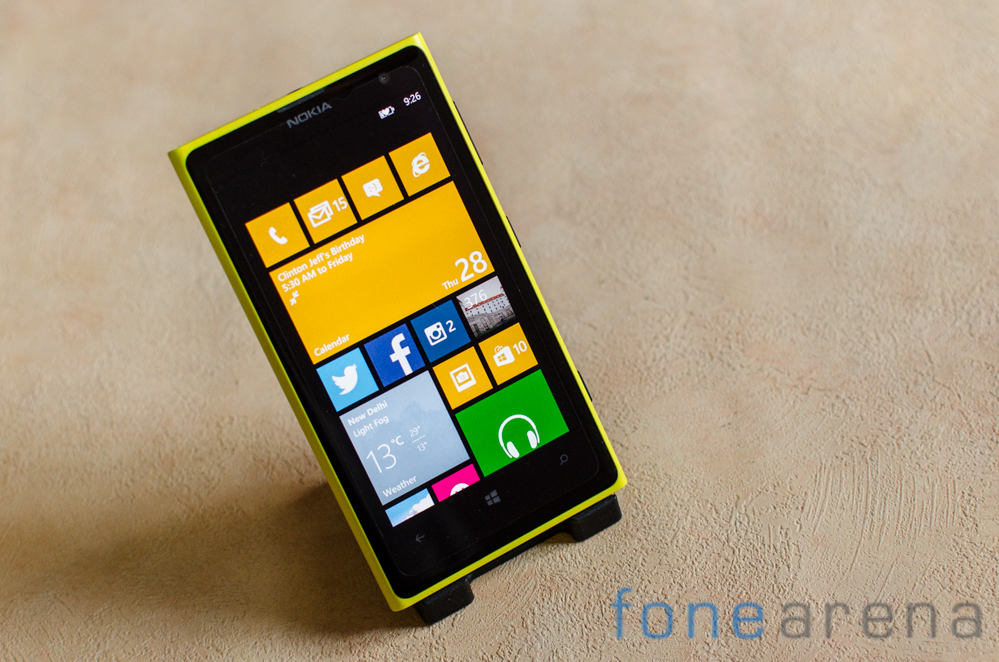 Every once in a while a phone is released which showcases the best of technology possible at that time. Back in June 2012, this is how we started off our review of the Nokia 808 PureView. Fast forward several months and the same words hold true for the Nokia Lumia 1020 as well. The epitome of smartphone photography capabilities combined into a slimmed down form factor and a modern operating system has created a phone that Nokia calls the photography centric handset in the world. We test out those claims in our review.

From the front, the Lumia 1020 continues Nokia’s Fabula design philosophy with the smooth curves making the handset particularly comfortable to hold. A large 4.5 inch display takes center stage position. Below this are the three standard Windows Phone buttons that correspond to back, menu and search. Like other Lumia devices, this one too is made of a unibody polycarbonate chassis with a matte finish that feels fantastic in the hand. 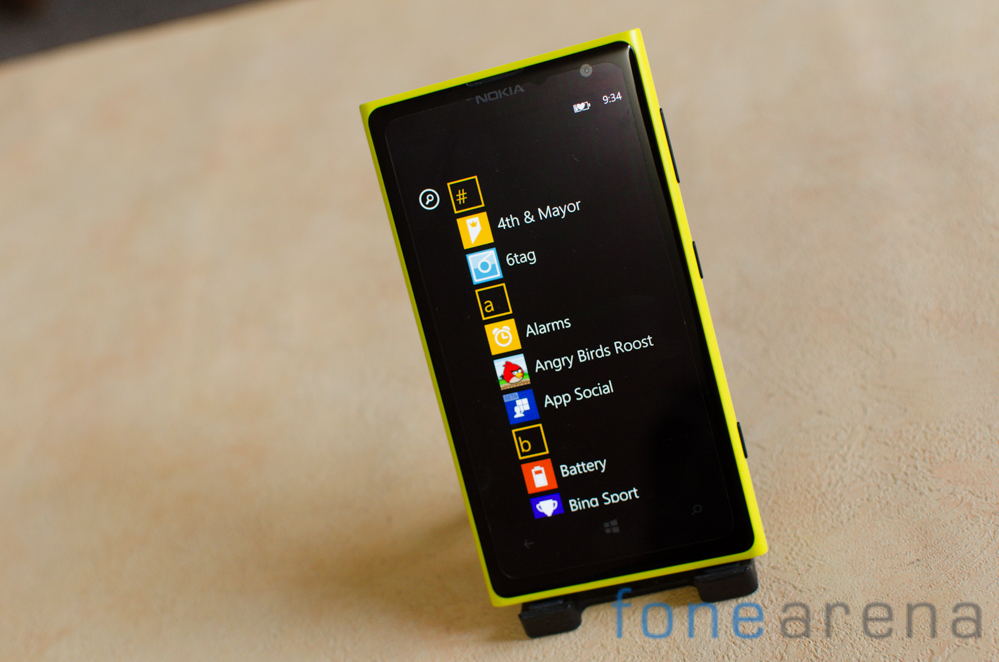 There’s Gorilla Glass 3 on the front that curves down around the edges and seamlessly merges into the polycarbonate shell. While the phone isn’t small by any standard coming in at 10.4mm thickness, it has definitely shrunk down a bit compared to the Lumia 920. The weight too is lower at 158 grams. 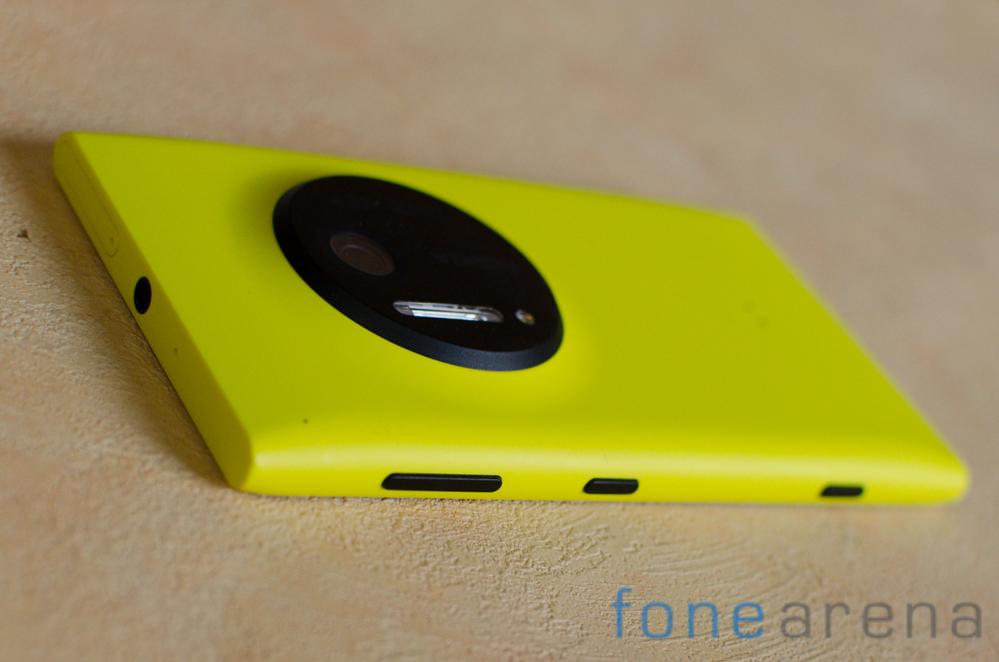 While the left side of the phone is bereft of any buttons, the right side is chock full on controls. Over on the top you get the volume rocker and below it is the power key. Both the buttons give great tactile feedback. You can also double tap on the screen directly to unlock it. Below the power button is the all important camera key. The dual stage button provides sufficient ‘give’ and is an integral part of the photography centric design of the handset. 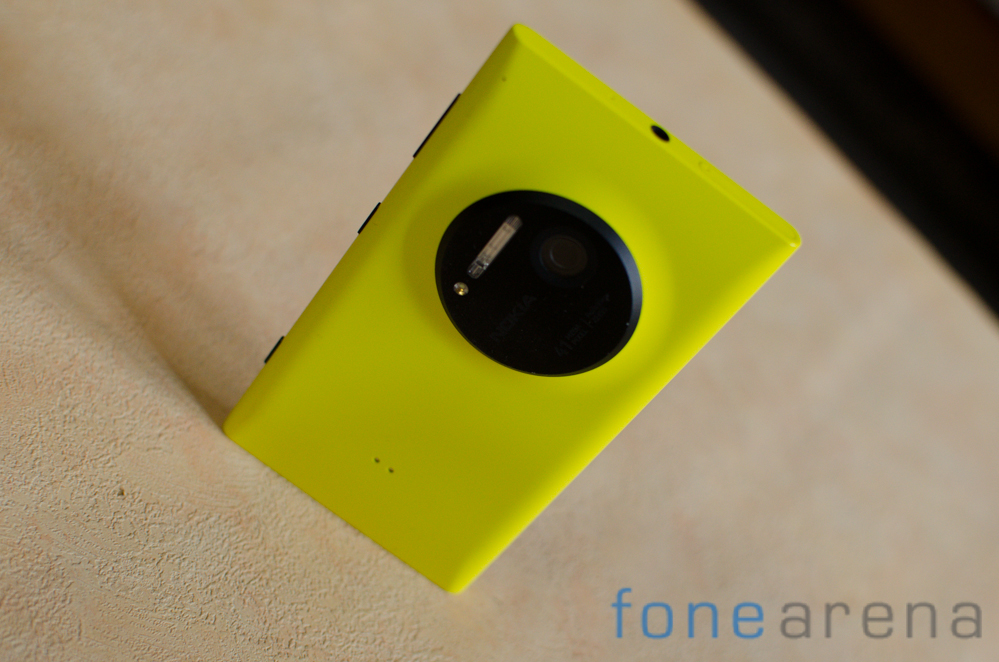 Moving over to the back of the Lumia 1020, you spot the giant eye like protrusion towards the top. Hidden behind it is the camera module that forms the essence of the device. By separating out the camera module, Nokia was able to give the rest of the phone a fairly sleek profile. No, the Lumia 1020 doesn’t compete with the uber sleek handsets out there but coming from the Nokia 808 PureView, it is quite interesting to see how Nokia have been able to build upon the technology and miniaturize it as well to a certain extent. Towards the bottom you can also spot the connectors for the wireless charging shell. 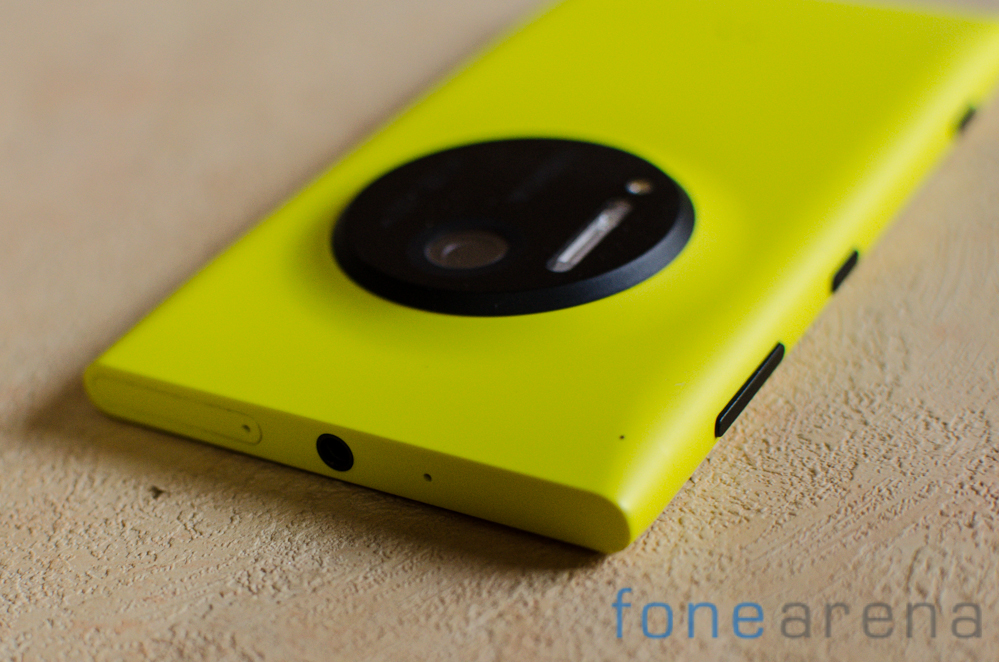 The top of the phone is where the 3.5mm audio connector lies. Next to it is the microSIM card slot. on the other side, at the bottom is the centered micro USB slot. A speaker grille is placed on the left while a lanyard hole is on the right side. The speaker tends to be sufficiently loud and clear for listening to audio content and making calls over the speakerphone. 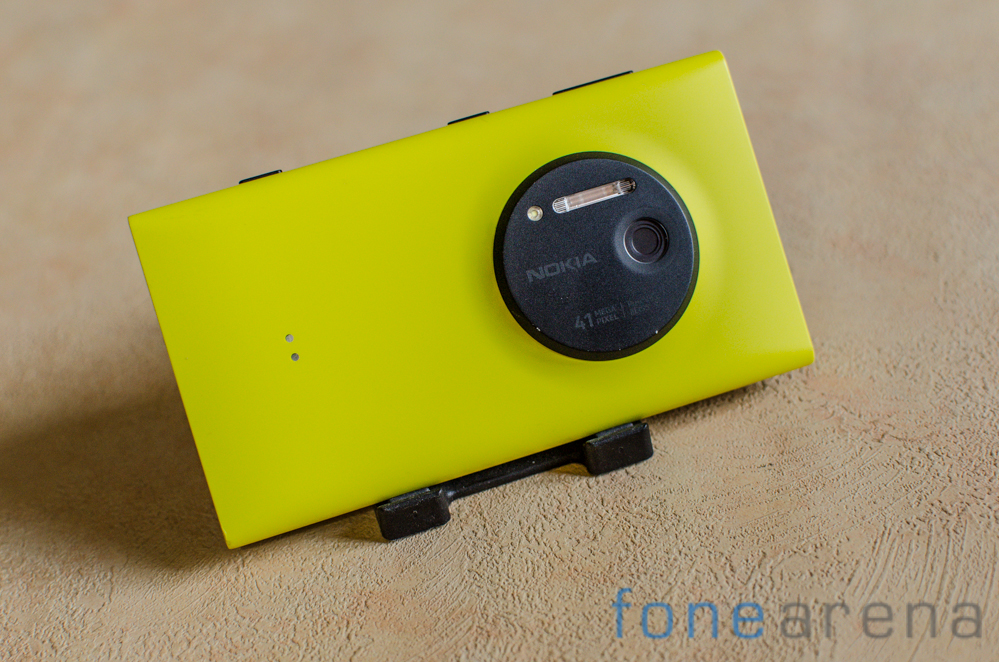 Overall, Nokia has built upon an already existing design and made it look interesting. Naysayers will call it a bit boring and that might be true to a certain extent given that it is a play on the design pioneered by the Nokia N9. However even today, the phone stands out amongst its compatriots and there’s something to be said about not messing around with a design that already works. The phone ships in yellow, white and black colors.

The Lumia 1020 runs on Windows Phone 8 and given the way the operating system works, there’s only that much that can be done in terms of customization. With Amber update, users got the ability to double tap their display to unlock amongst other features. If you want the low down on the operating system, you’d be best served by reading our Windows Phone 8. Instead, we’ll talk about some of the differentiating software that Nokia has preloaded on the device. 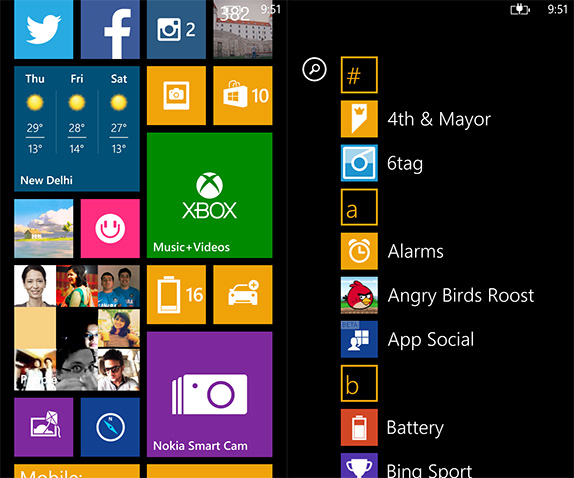 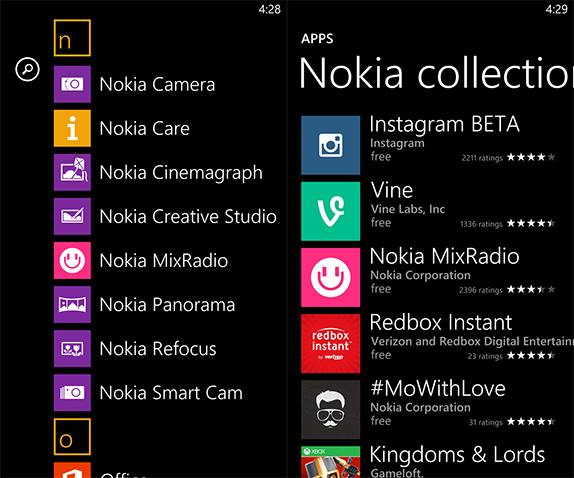 The Nokia Camera app is perhaps the best implementation of smartphone camera controls that we have seen to date. For the novice user, it brings point and shoot controls. Swipe the capture button to the left and you get a full range of controls that extends from white balance settings, manual focus, ISO control, shutter speed as well as exposure compensation. 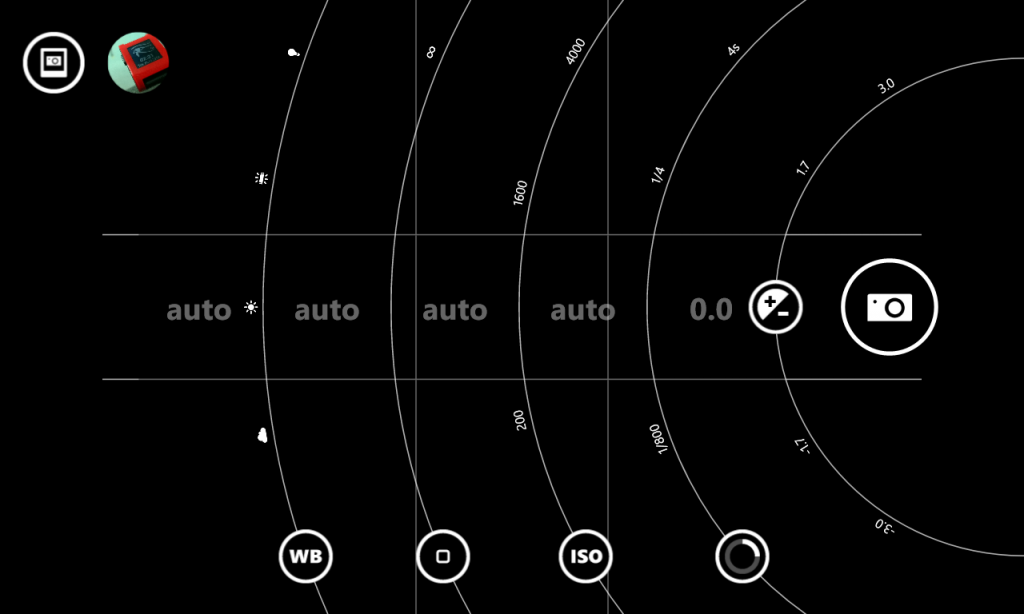 As all settings are adjusted in real time, any changes can be viewed as soon as you make them. The entire process is extremely smooth and is geared towards one handed operation. It is also possible to toggle through quick settings like the flash options without digging into the advanced menu. Worth noting is that the ISO goes right up to 3200 and shutter speed can be adjusted from 1/16,000 all the way to 4 seconds which should let you do some decent low light photography. 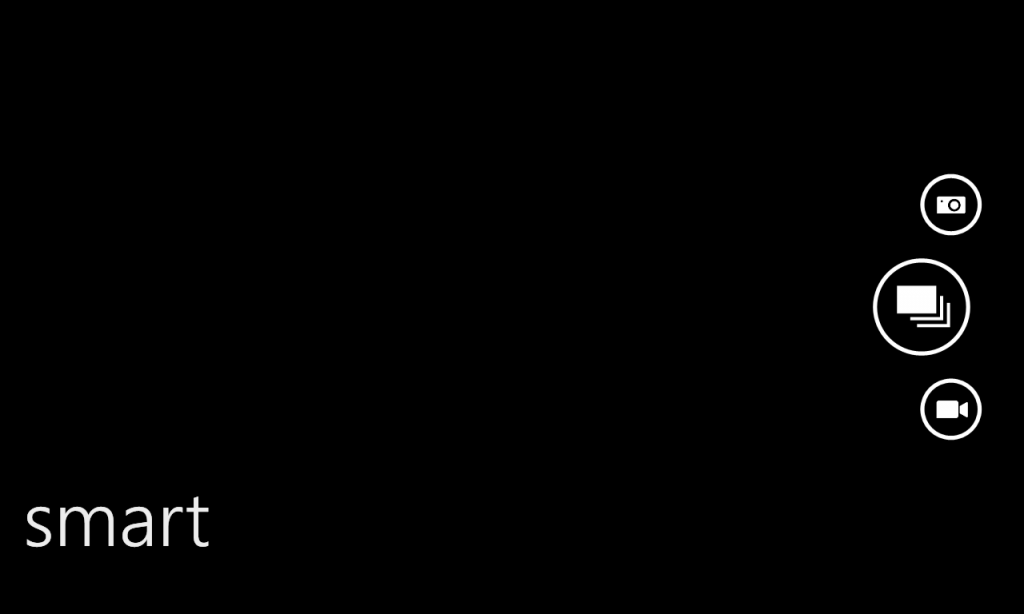 Nokia Camera also integrates Smart Cam functionality. Here the camera takes a series of shots and then let’s you play around with the results. It is possible to select the best shot out of them or change just the faces. You can also remove objects, create motion blur.

A recently introduced application for the Lumia 1020 that once again demonstrates its imaging prowess is Nokia Refocus. The concept is simple but the end result is quite astonishing. If you’ve been intrigued by Lytro photography, this’ll definitely interest you. Nokia Refocus takes a series of shots at multiple focus points and then lets you switch focus after you’ve shot the image. This works surprisingly well and you can have the complete shot in focus as well. We’ve embedded a test shot above. You can click around to change focus. It works best when there is considerable distance between objects to create proper depth of field.

Under the hood of the Lumia 1020 is a 1.5Ghz Qualcomm Snapdragon 8960 chipset and this is paired with an Adreno 225GPU. Not top of the line specifications by far but more than enough to make Windows Phone fly. The phone also has 2GB of RAM which is essential given the fact that the phone has to work with very high resolution images on the fly. It is difficult to pit the Lumia 1020 against smartphones running on other software platforms but the phone does perform favorably within Windows Phone based handsets.

Worth keeping in mind is that the new line of Snapdragon 800 chipset equipped Windows Phone devices like the Lumia 1520 are most definitely going to perform better. That said, the Lumia 1020 is quick enough for all practical purposes.

The display on the Lumia 1020 is a 4.5 inch 720p module. The resolution of 1280 x 768 pixels is well below the Full HD panels you see on modern flagships but is still good enough for day to day usage. The screen is of the AMOLED variety and it is a PureMotion HD+ panel where pixels are sped up to reduce ghosting. The bezels on the side of the display are rather huge but the use of the AMOLED display and Windows Phone’s inherent color scheme makes it all look seamless. 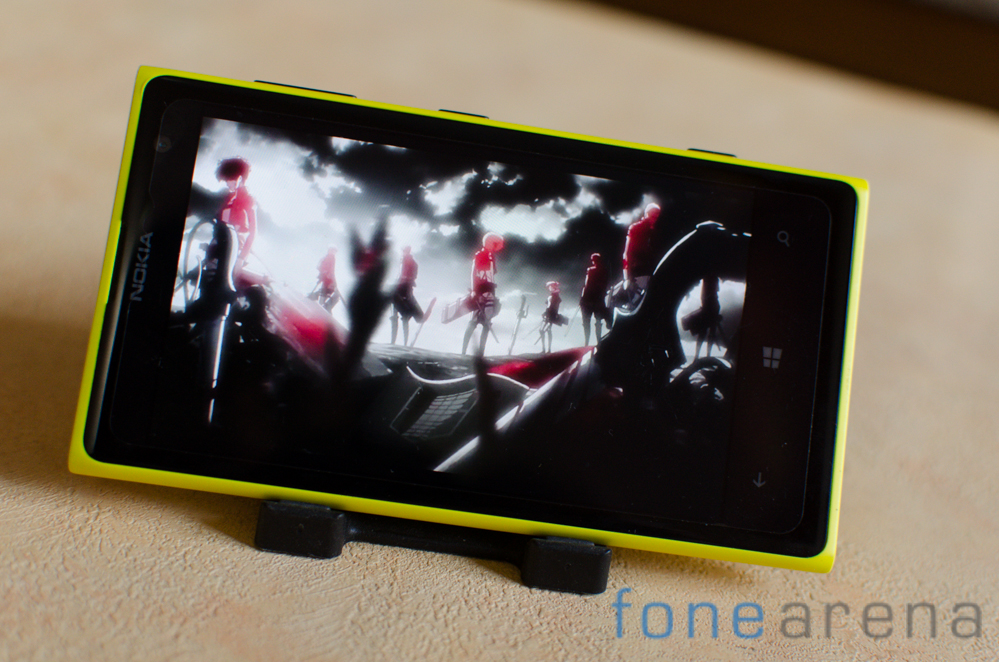 The viewing angles on the display are wide and the colors look nice and bright. Brightness levels are more than adequate and you won’t be disappointed by sunlight readability either. Nokia has built in some software features that’ll let you further adjust screen related settings including the color profiles, touch sensitive and the ability to further improve sunlight readability.

The camera is the essence of the Nokia Lumia 1020. The 41MP sensor surrounded by the eye like aluminum cover embedded into the polycarbonate shell makes it an iconic piece of industrial design. Above it lies the Xenon flash flanked by the LED flash on the side which can be toggled on while recording video. With the upcoming Nokia Black update, the Lumia 1020 will also be able to shoot RAW images. 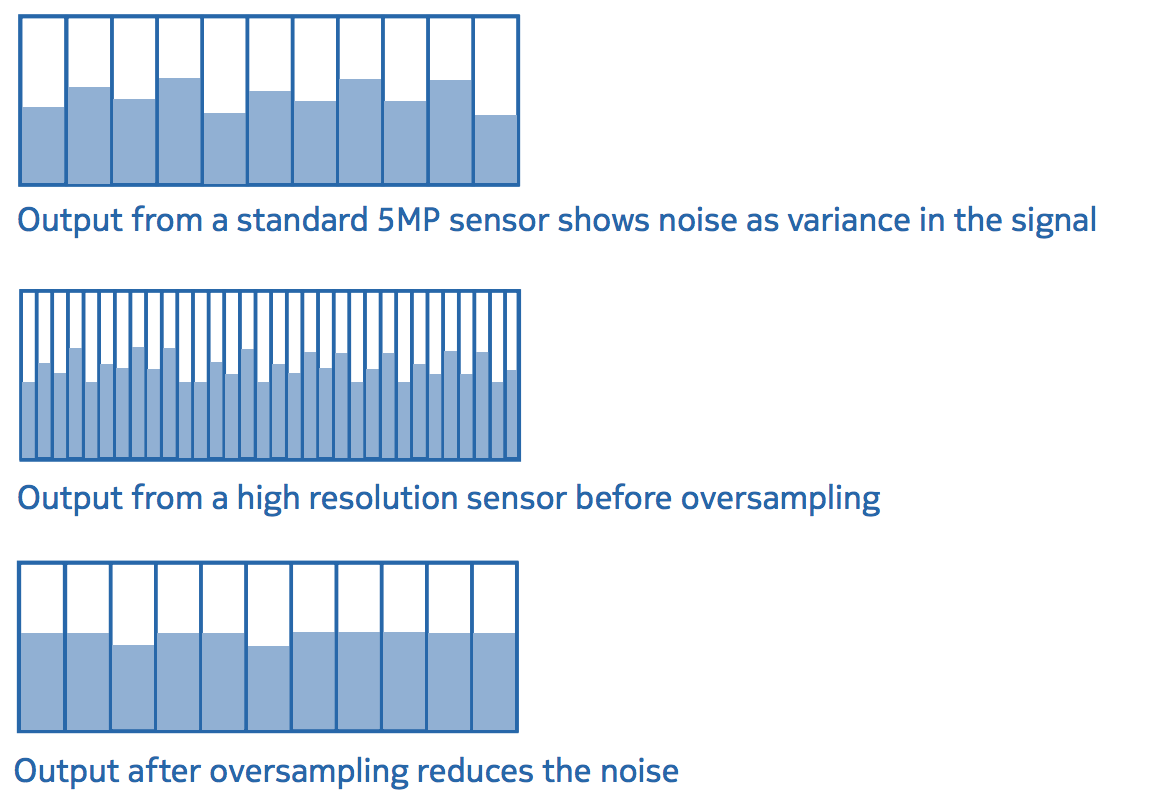 We’ve been harping about how more Megapixels doesn’t mean better image quality for years now and so you’d be right in asking, what’s changed? Oversampling would be the answer to that question. While on the hardware front, Nokia has combined  high quality optics and very sophisticated sensor design, it has also done something very nifty on the software side of things. The concept of oversampling involves merging adjoining pixels to create a superpixel that has lesser noise. We took a look at the technology behind oversampling and its benefits in our camera focussed article earlier. We’d definitely urge you to read that alongside this review. 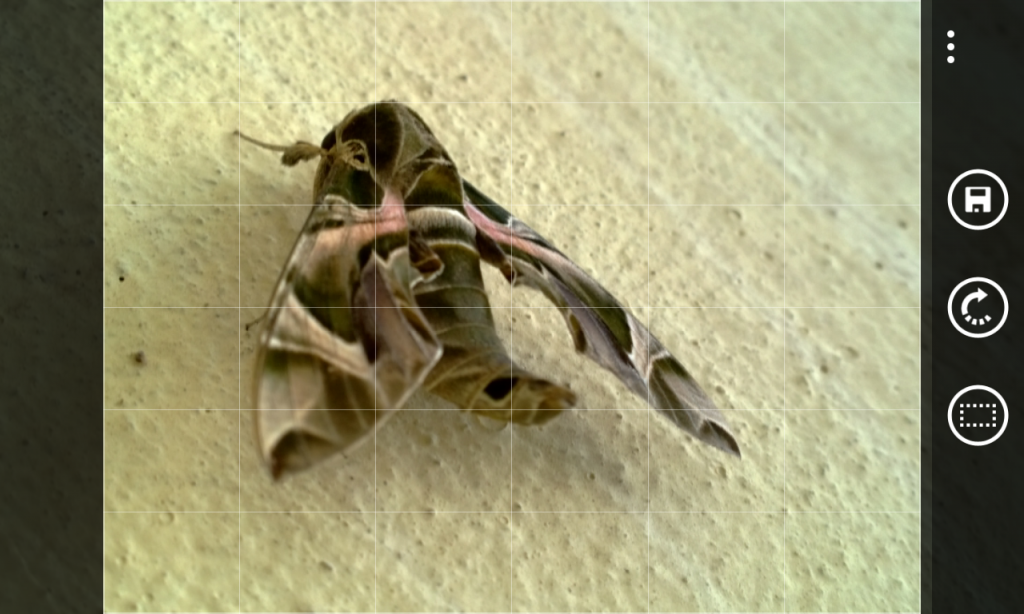 The camera experience is intrinsically tied with Nokia’s Camera software as that is the only app that can actually capture full resolution shots. 5MP shots are then saved into the default camera gallery. These shots are oversampled versions with lower noise levels. Tapping the images pops you back into the Nokia Camera application where you can then play around with full resolution versions. 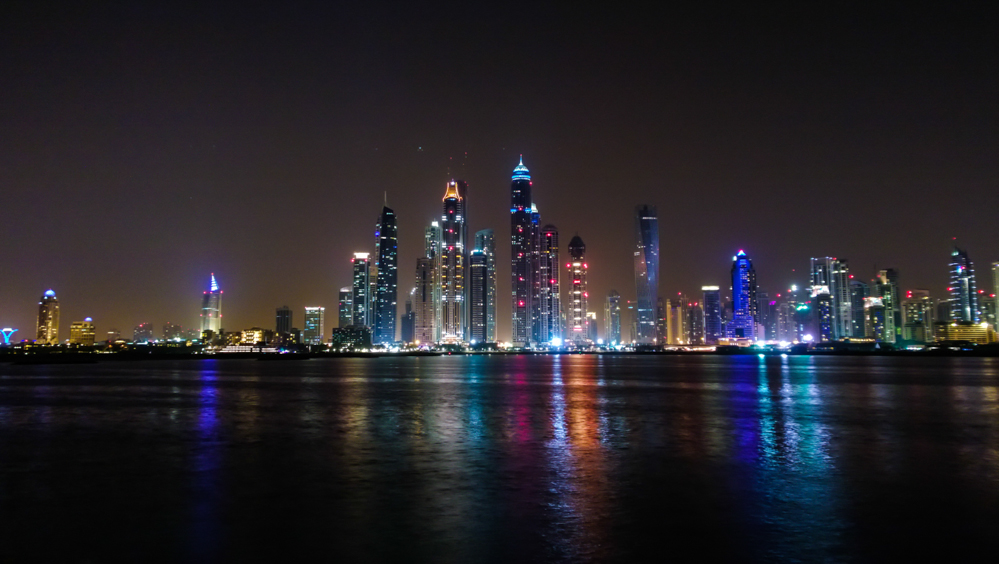 As expected, shots from the Lumia 1020 looks stunning for the most part. Like the 808, we feel that the camera has a tendency to blow highlights but this can be adjusted by lowering the exposure levels. It is possible to zoom into images with no loss of quality. The further you zoom in, the less the camera oversamples the shot. Similarly, if you shoot a zoomed in image, you can go back to the Nokia Camera application to readjust the frame and zoom out from the it. You can take  a look at some of the sample shots from the camera below. 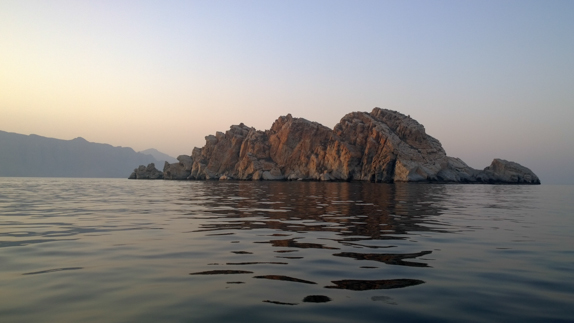 You should also check out our Nokia Lumia 1020 Camera Samples post for the full range of shots taken in a range of lighting conditions. 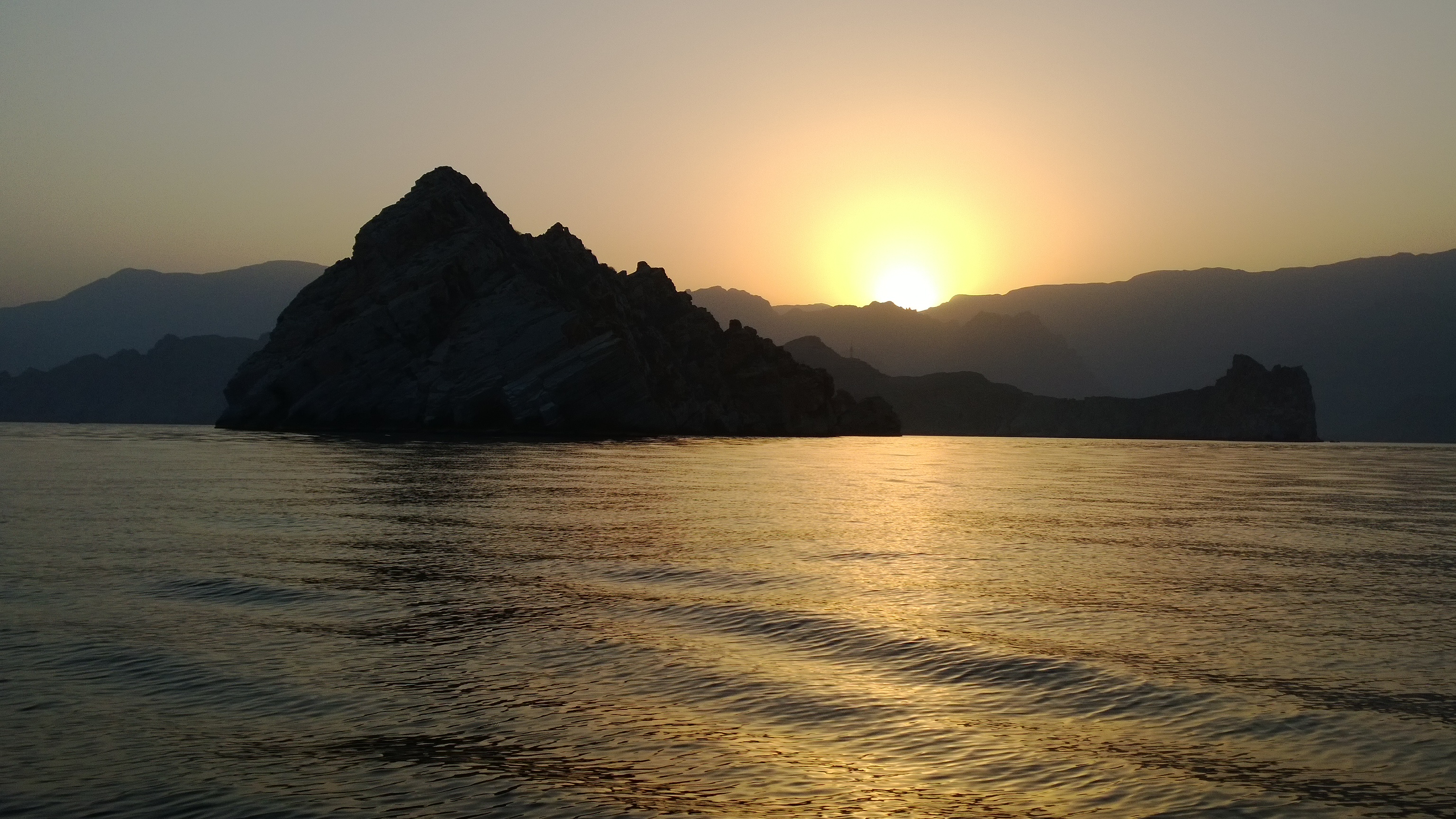 Interestingly, you can also zoom into video content using the same lossless technology that is included in the still camera. 1080p video lets you zoom in to the equivalent of 4x while 720p content bumps that to 6x. The optical image stabilization assembly in the camera module lets you take incredibly smooth video content. You can switch focus modes between continuous, macro or infinity. Audio too sounds absolutely incredible thanks to the noise canceling MEMS microphones being used.

There’s 32GB of built in storage on the Nokia Lumia 1020 and there is no provision to expand this. The average file size of a full resolution shot is about 10-15MB and RAW files will be close to 40MB and you’ll definitely face memory shortage. Connectivity options on the phone range from Bluetooth, WiFi b/g/n to GPS, GLONASS. There’s also NFC support. 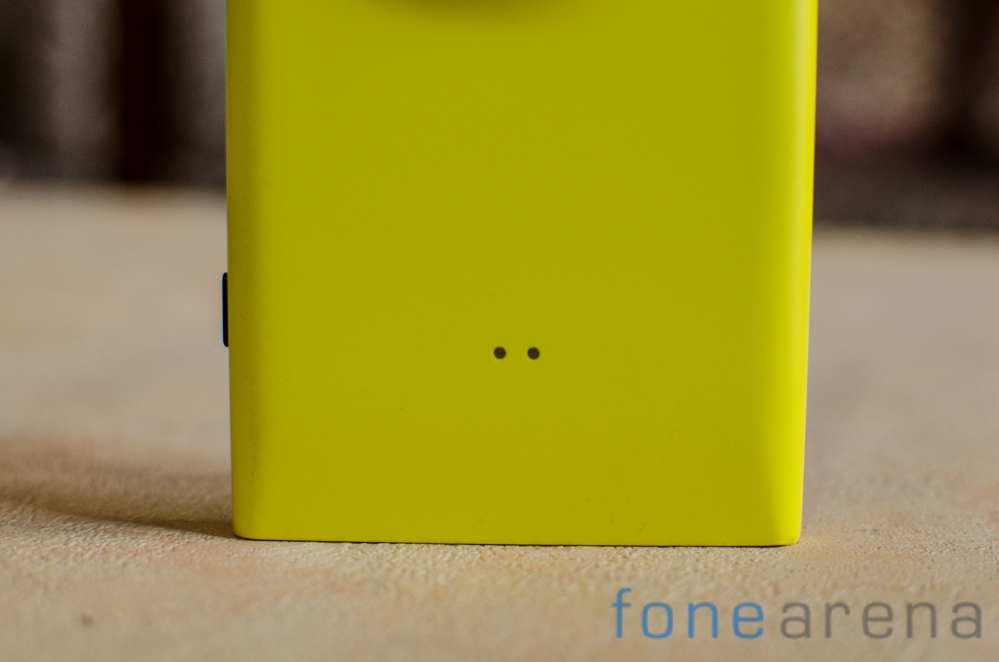 Unfortunately the 1020 doesn’t have built in Qi based wireless charging and instead you’ll have to get an external shell that adds this functionality to the handset. The battery is rated for 2000 mAh that may or may not prove to be sufficient depending on your usage scenario. Avid shutterbugs will definitely drain the battery sooner rather than later. You’ll be better served by carrying an external battery pack alongside. On a side note, Nokia’s excellent camera grip accessory for the Lumia 1020 integrates a battery as well.

Let’s put it straight. The Lumia 1020 is the best camera phone you can buy right now. There’s absolutely no doubt about that. Its everything that the Nokia 808 aspired to be and then more. Compelling hardware with a camera that blows away point and shoots alongside a modern operating system. 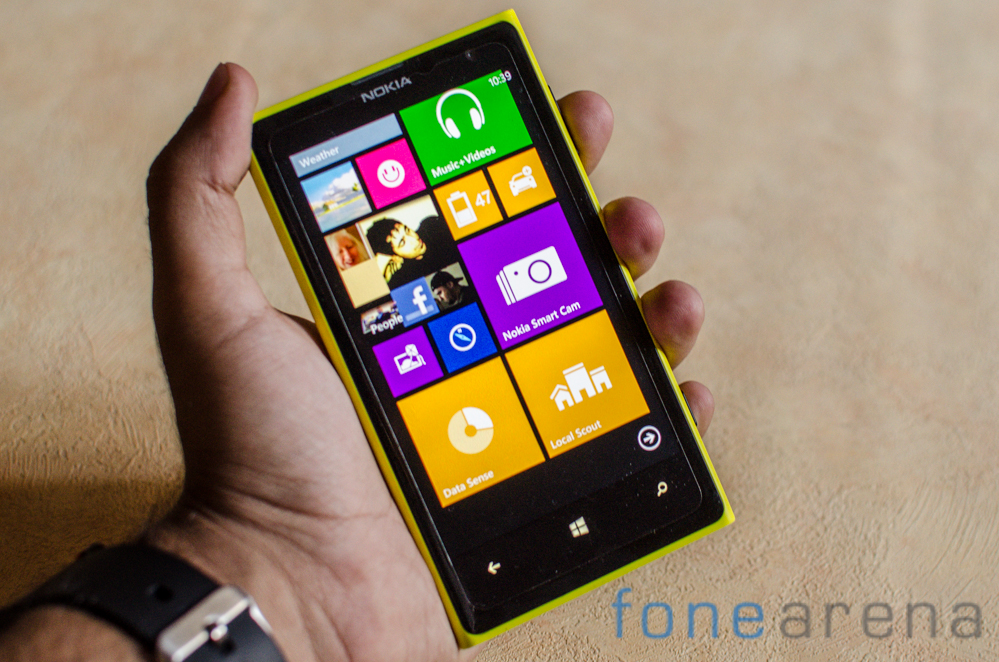 Sounds all hunky dory but unfortunately it is not. Windows Phone still has its quibbles. From the lacking notification center to a not that great multitasking experience. The app gap has been pretty much bridged now that Instagram too is on the platform but you’ll still have to bear with a few niggles. That apart, the Lumia 1020 is a solid smartphone that also gives you the best camera you can slip into your pocket.

Shot to shot time can be slow