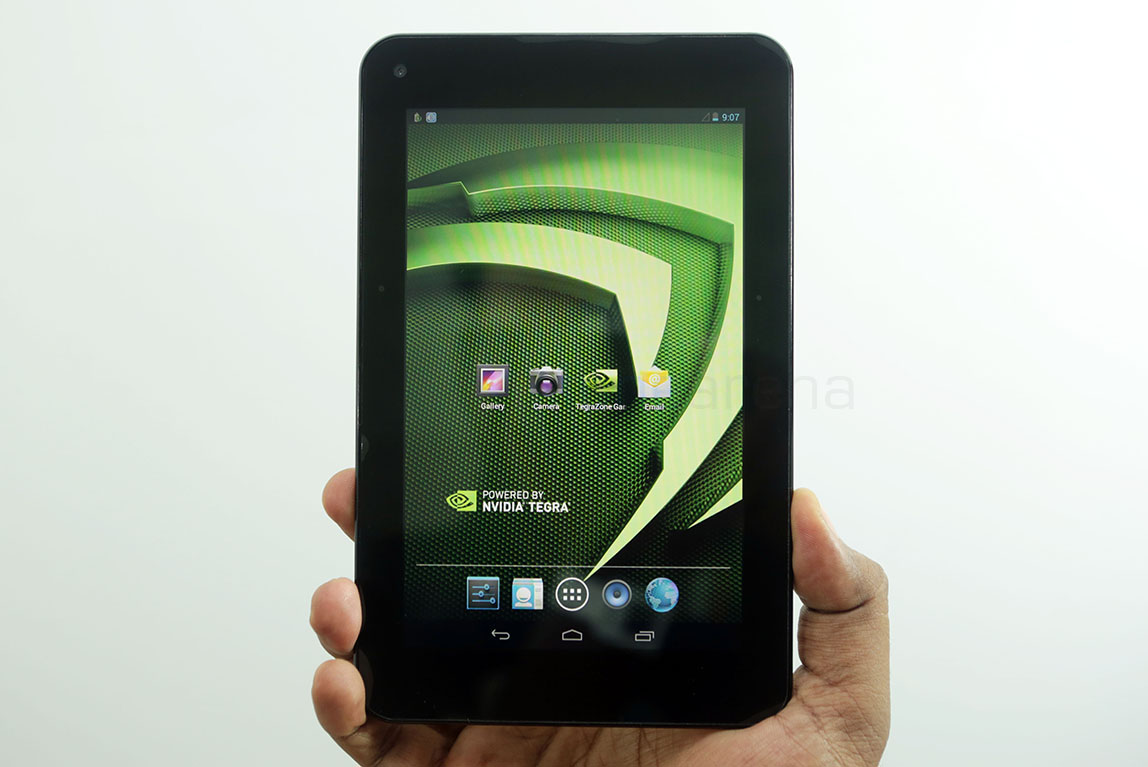 Xolo launched the Play Tab 7.0, the company’s first tablet featuring a NVIDIA Tegra 3 processor last month. We already unboxed the tablet and also ran benchmarks. Here we have the complete review of the tablet. The tablet has a perfect size that is comfortable in a single hand, as you can see in the image above. Is the tablet worth the price? Let’s find out if the tablet is worth the price. 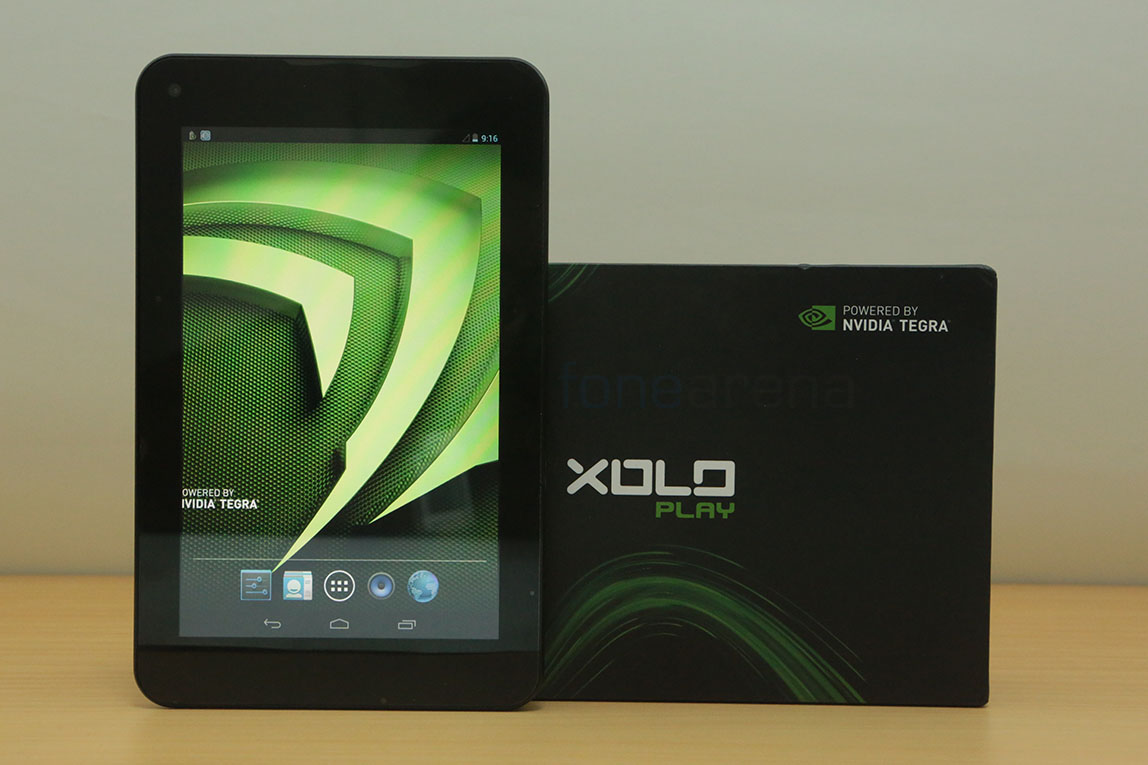 We unboxed the tablet recently. Check out the unboxing video. 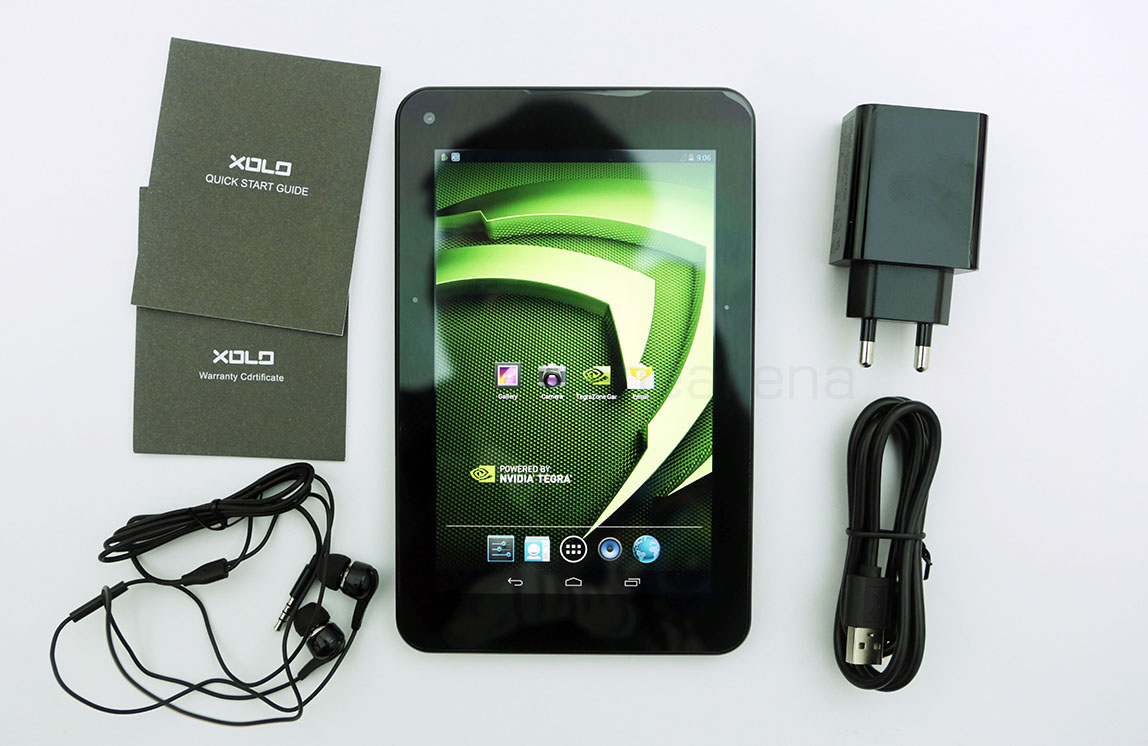 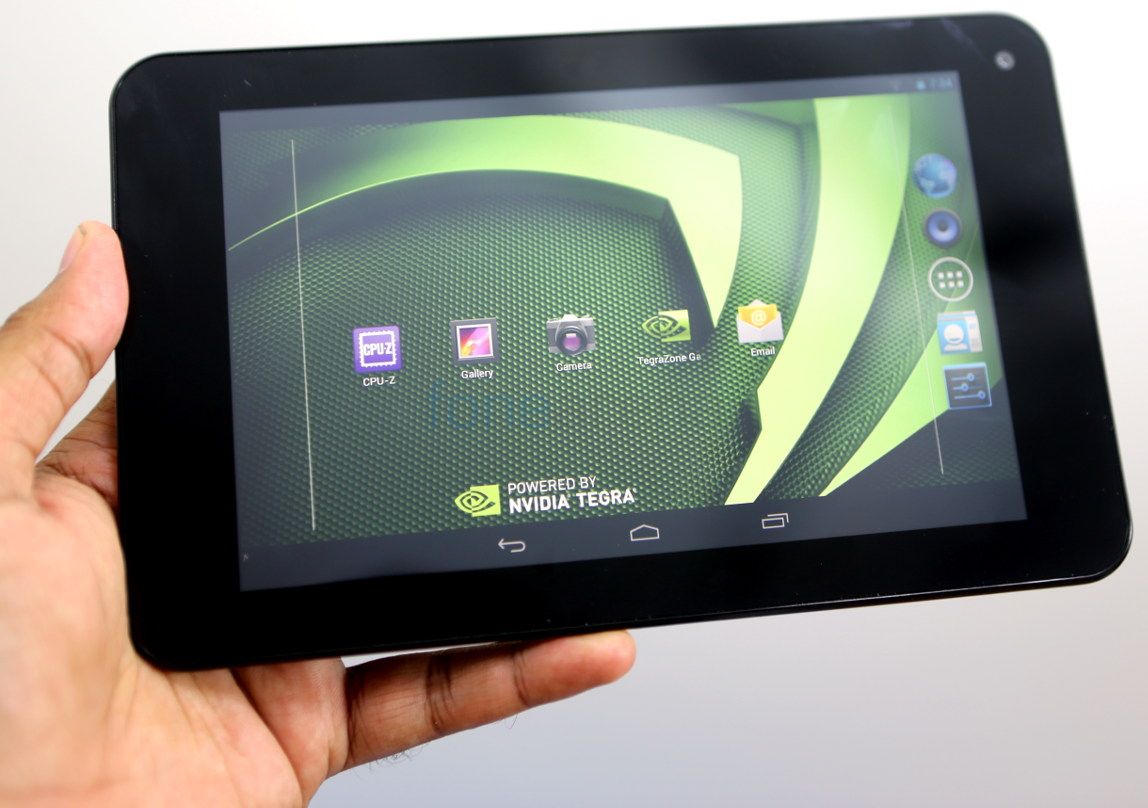 The Xolo Play Tab 7.0 has a 7-inch multi-touch IPS display at 1280 x 800 pixel resolution at a pixel density of 216 PPI. The display has good viewing angles and offer vibrant colors, but it is very glossy, making it hard to use it under directly sunlight. This makes it hard to read and also hard to watch videos under in brightly lit conditions. There is a huge bezel around the display, which is also reflective. Since it is glossy, it is also prone to finger prints, as you can see in the image above. Better get a screen guard, since the tablet doesn’t come with one in the box. The tablet doesn’t have any hardware button on the front. 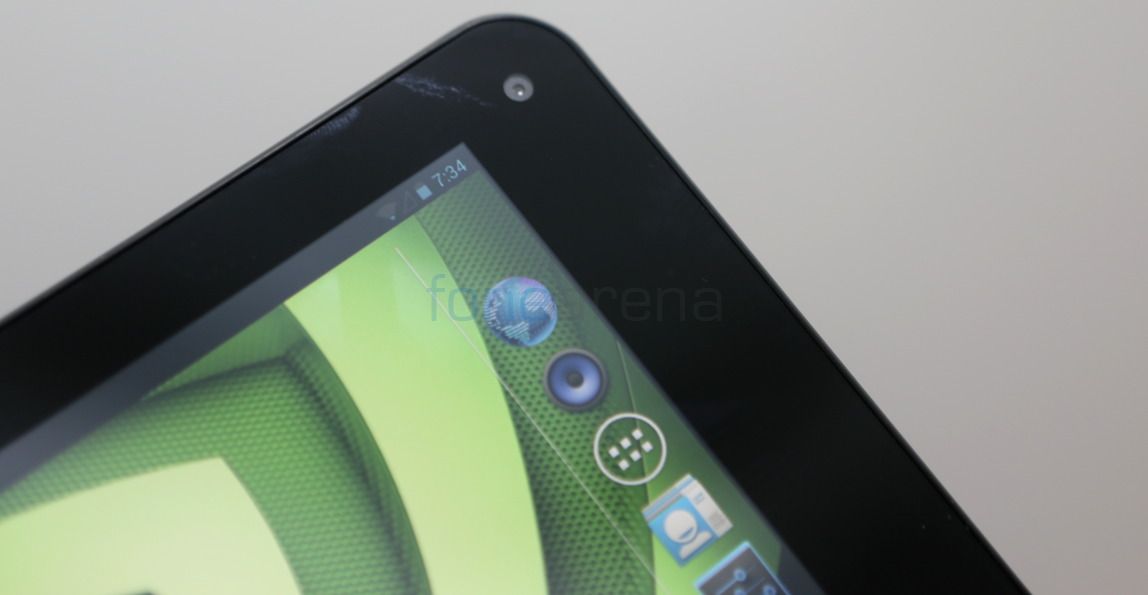 There is a 2-megapixel fixed focus camera on the front bezel. The phone lack an ambient light sensor, so you have to adjust the brightness manually based on your surrounding lighting. 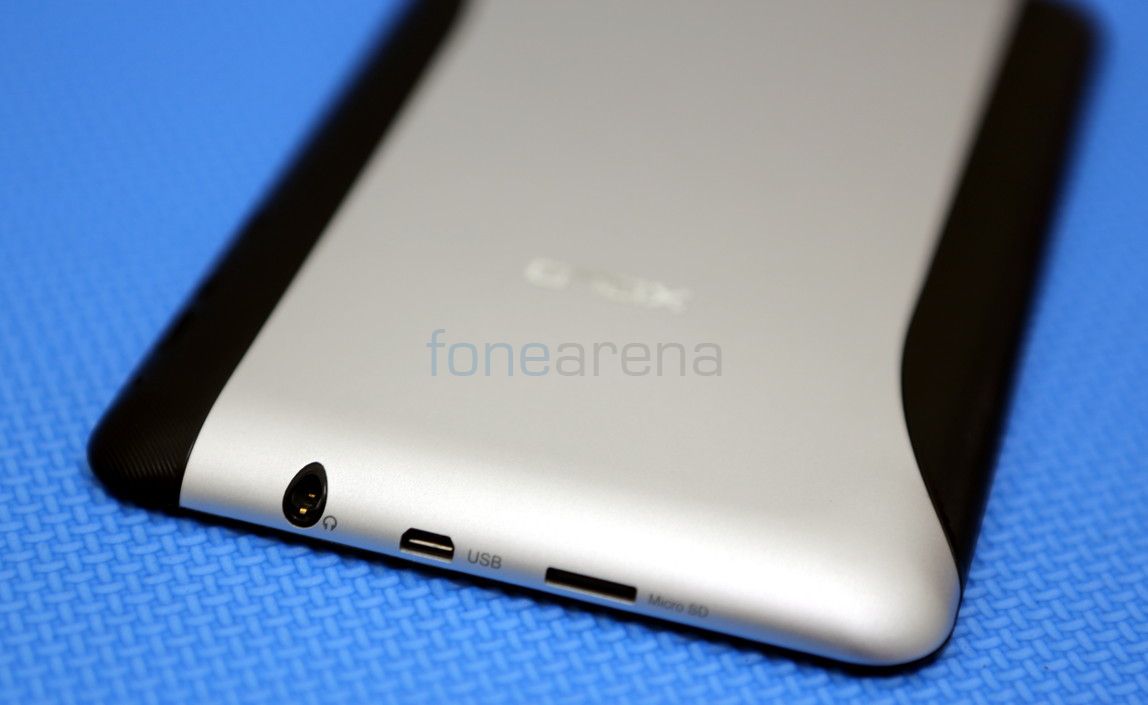 The 3.5mm audio jack, micro USB port and the micro SD card slot are present on the top. 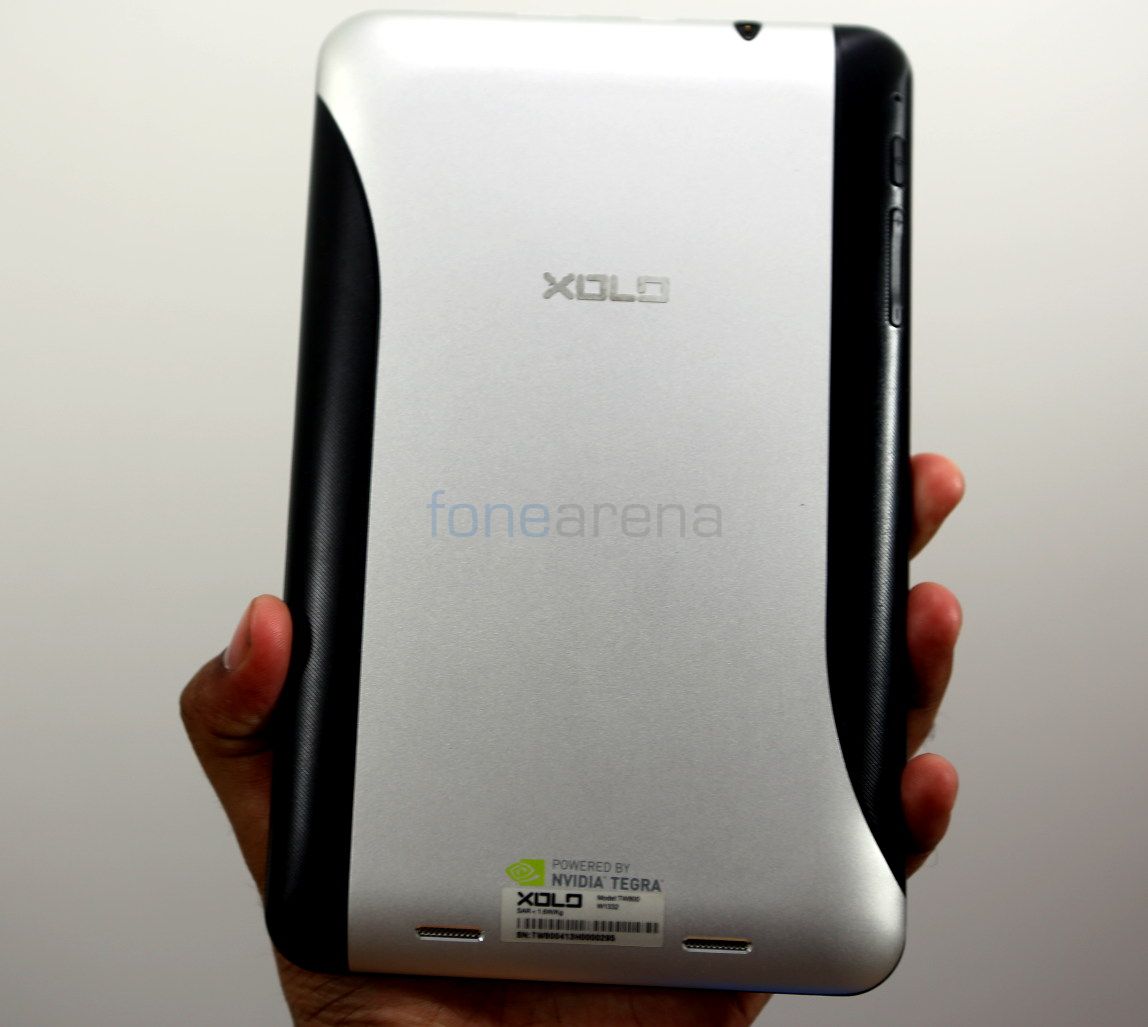 The tablet has a perfect size and weighs 338 grams, which is a bit heavier than the Nexus 7 (2013), but it is easy to hold. The back is made of metal in chrome color, but the design is spoiled by the plastic accents on the corners, making it feel cheap. You have the Xolo logo etched in metal, in the center. 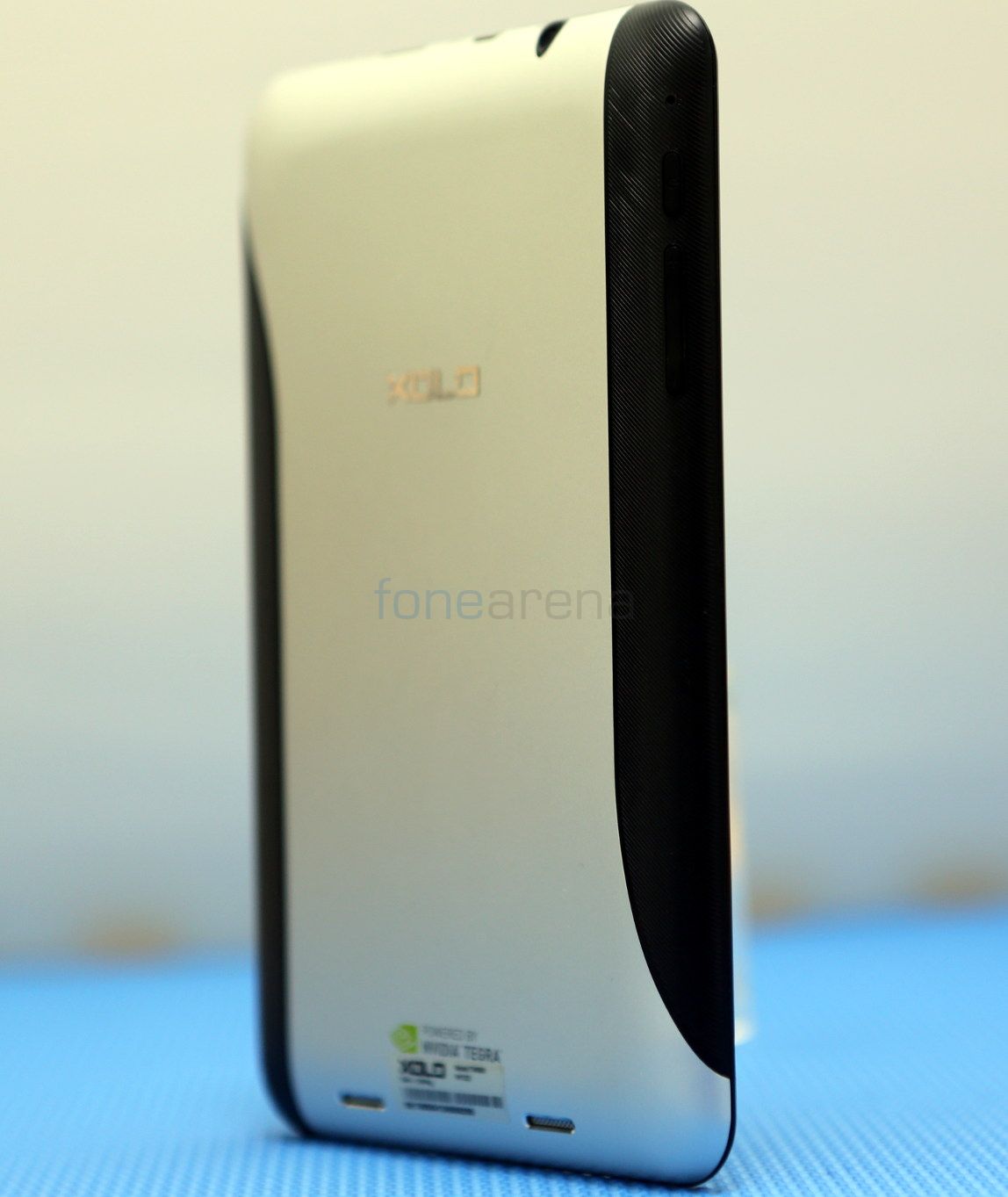 The tablet is 10.6mm thick. The power button and the volume rockers are present on the black plastic on the back, similar to the Nexus 7 and the Fonepad tablets. These are easy to access when you are holding. You also have a tiny microphone hole near the power button. 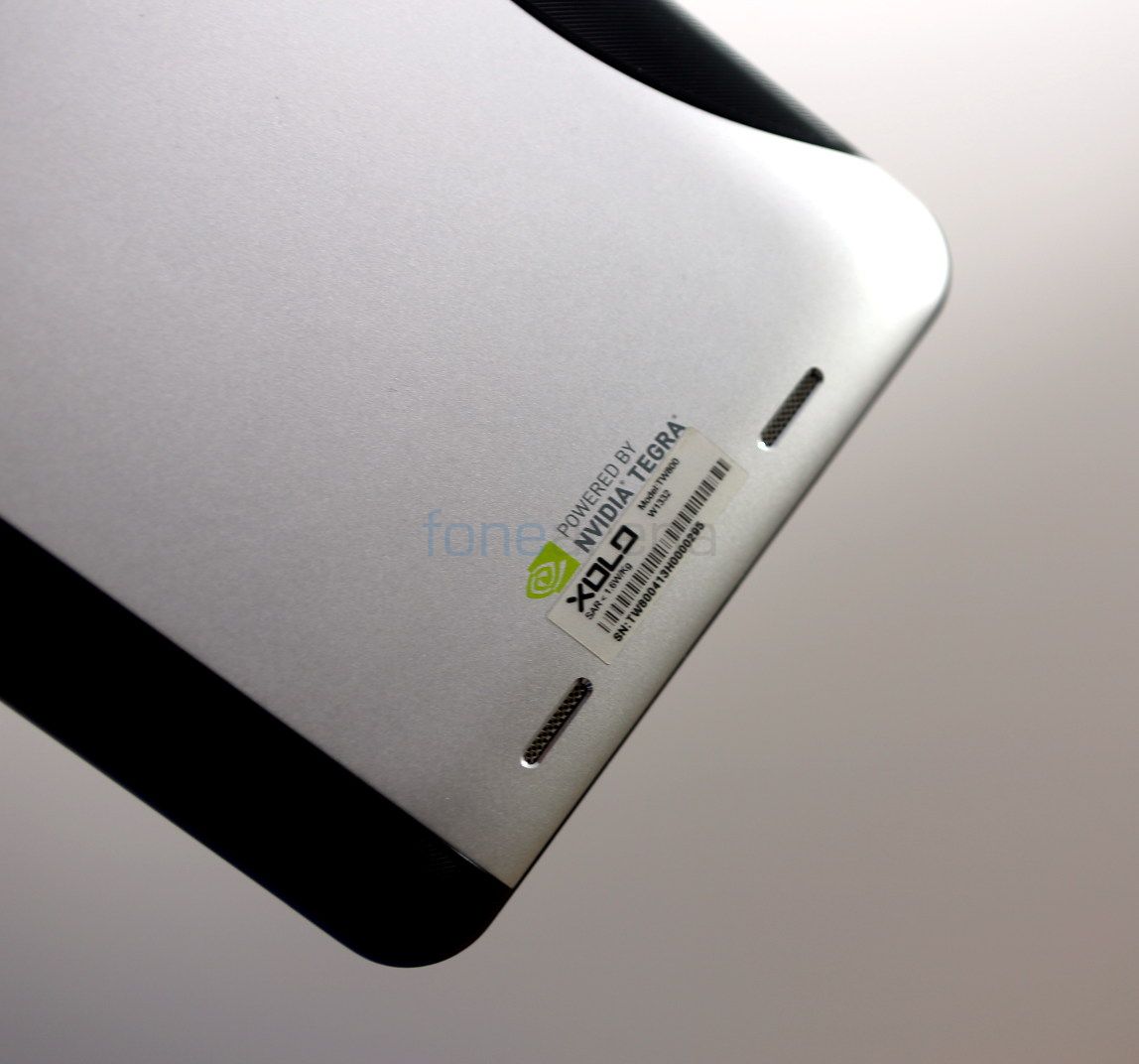 The loudspeakers are present on the bottom part of the tablet, just below the NVIDIA Tegra branding. 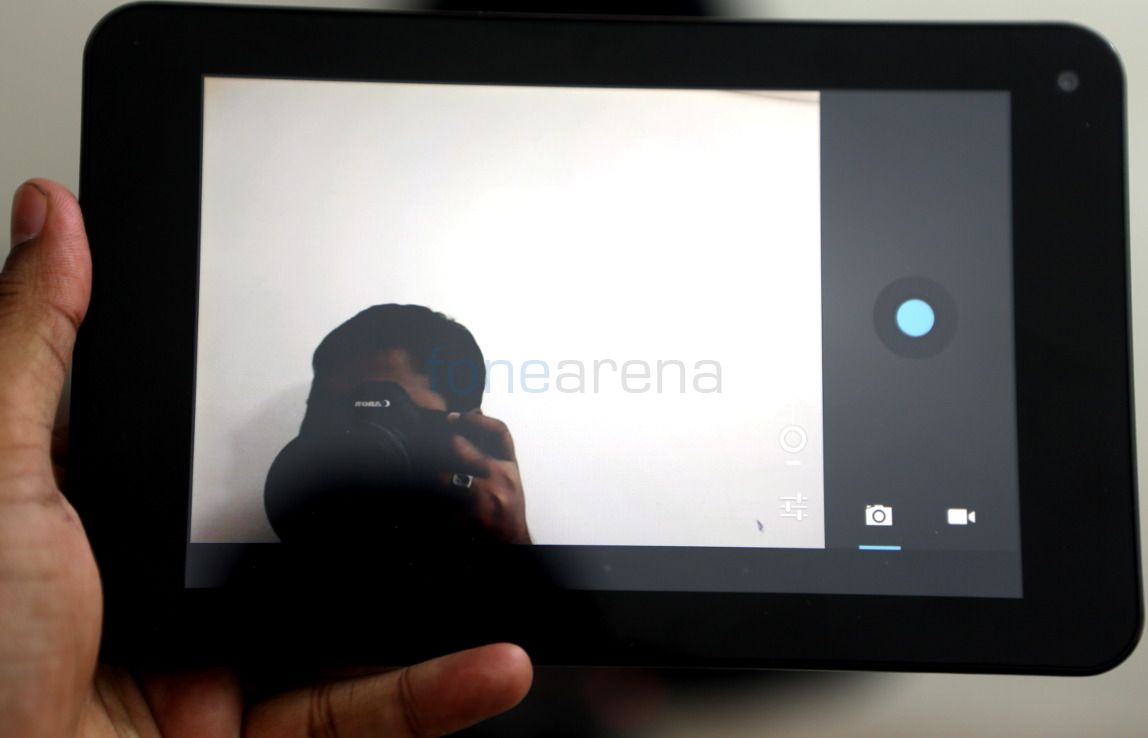 The 2-megapixel front-facing camera is decent for Hangouts and Skype chats. Built-in microphone is a big plus for video chats. The camera UI is very simple with a digital zoom slider. You can adjust white balance and exposure. The camera can record video in 176 x 144 pixel resolution. You also have video stabilization option that uses software stabilization to present from shakes. There is also a time-lapse option. Check out some camera samples. 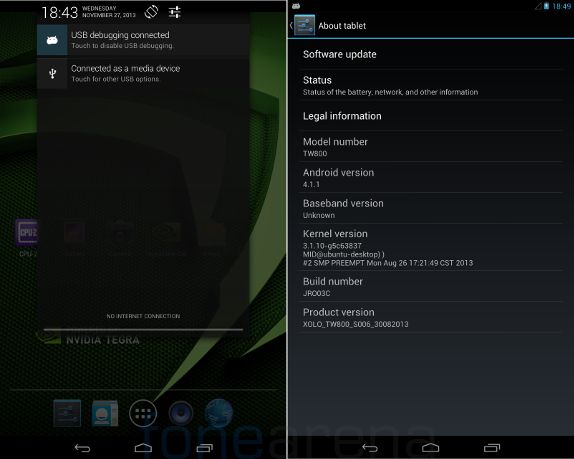 The Xolo Tab runs on Android 4.1.1 Jelly Bean, so you miss a lot of options such as lockscreen widgets, Day dream, Quick Settings, Photo filters in the gallery and more, but you can install Google Search from the Play Store for Google Now. You can organize home screen apps into folders and can also add app shortcuts to the tray. The drop down screen is in the center in portrait mode and it is in the left corner once you rotate it to the landscape mode. 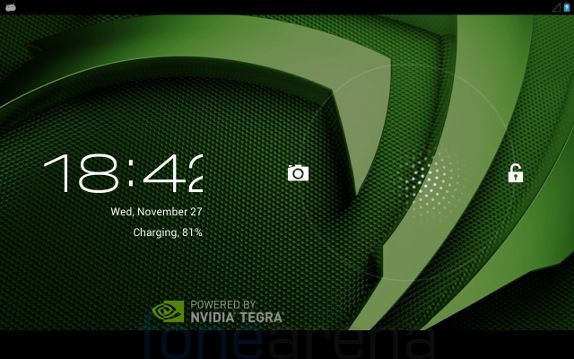 You can launch the camera directly from the lock screen. There is a wired bug in the lockscreen clock that doesn’t display the fourth digit in the clock properly in the landscape mode. It is also not easy to take a screenshot in the tablet. It the screenshot works, you get the volume slider in the screenshot. Xolo offers over-the-air (OTA) software update support for the tablet. Hope the tablet gets updated at least to Android 4.2, since this runs on Android 4.1, which is few three iterations old. There isn’t much to talk about the software since it is pretty much stock. 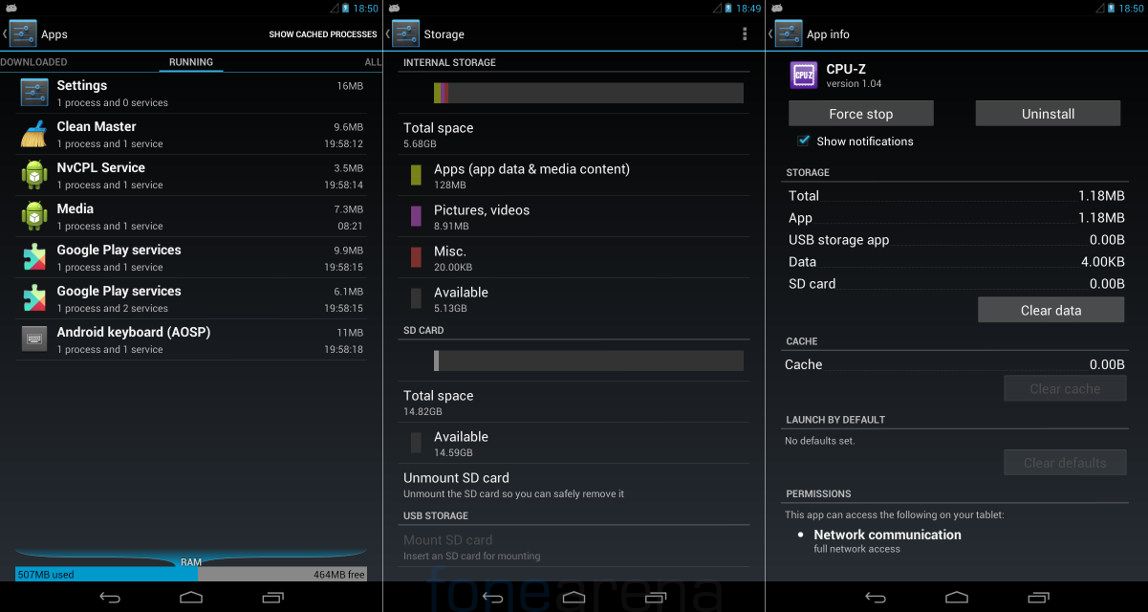 Out of 1GB of RAM, you get 971MB of usable RAM, out of which around 500 MB of RAM is free when the tablet is idle. Out of 8GB of internal storage you get 5.68 GB of user storage, but you don’t have an option to move apps to the SD card. 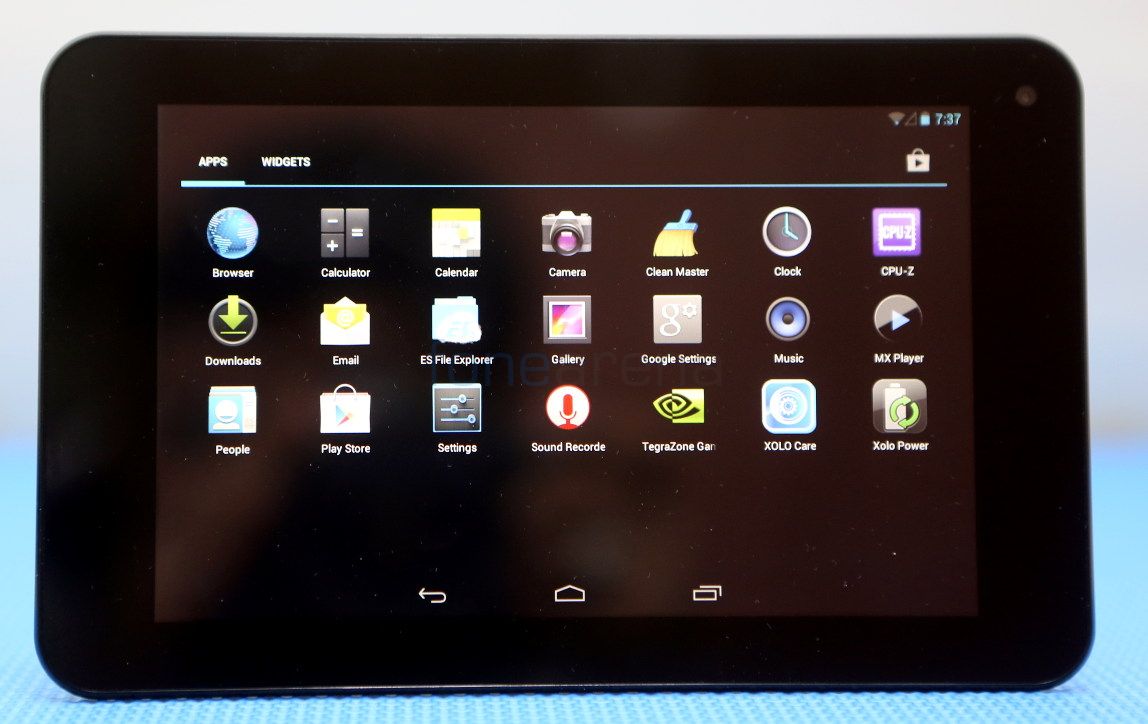 The tablet comes with quite a few of pre-loaded apps. There are the usual utility apps such as Calculator, Calendar, Clock, Gallery and Sound Recorder. It just has the Play Store without any other Google Apps such as YouTube that is usually seen on Xolo phones, but you can install these Google Apps manually from the Play Store. 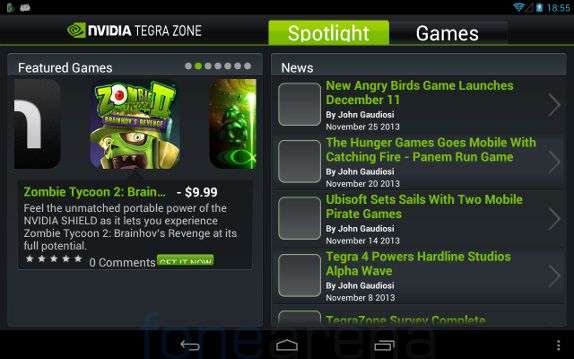 You also have Tegra Zone to download Tegra-optimized games for the tablet. 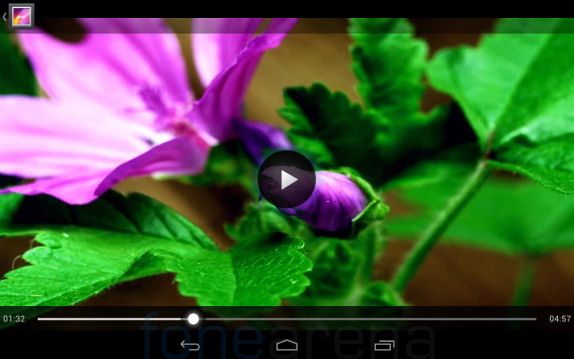 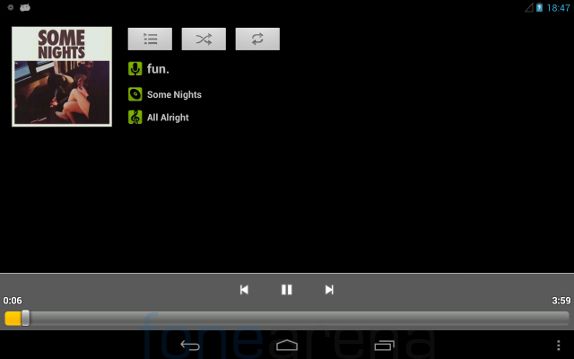 The stock music player is simple and can play a range of audio formats. Audio through the in-ear earphones is good. Loudspeaker output could be better. 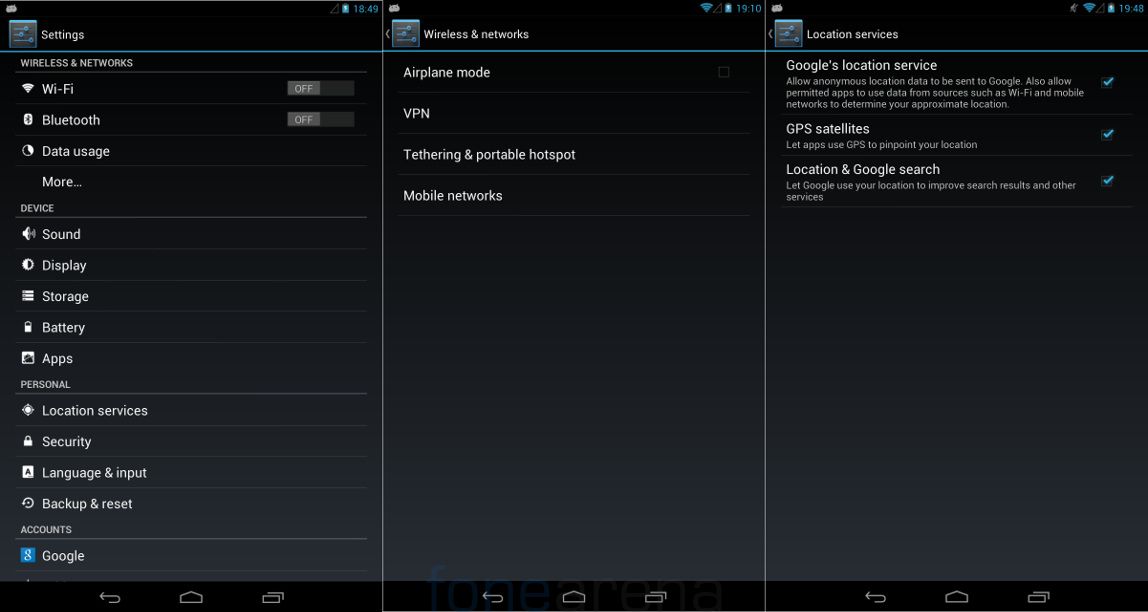 The tablet has Wi-Fi 802.11 b/g/n, Bluetooth 4.0 and also supports USB OTG, but it doesn’t come with a OTG cable in the box. You have settings for mobile networks, tethering and hotspot, but it is not clear if it supports an external dongle. We didn’t test it out. The tablet even has GPS support, even though it lacks a SIM card slot. Since it supports GPS, you can use offline maps app without any problem for navigation. Even though it lacks an ambient light sensor, it has accelerometer and magnetic sensors. 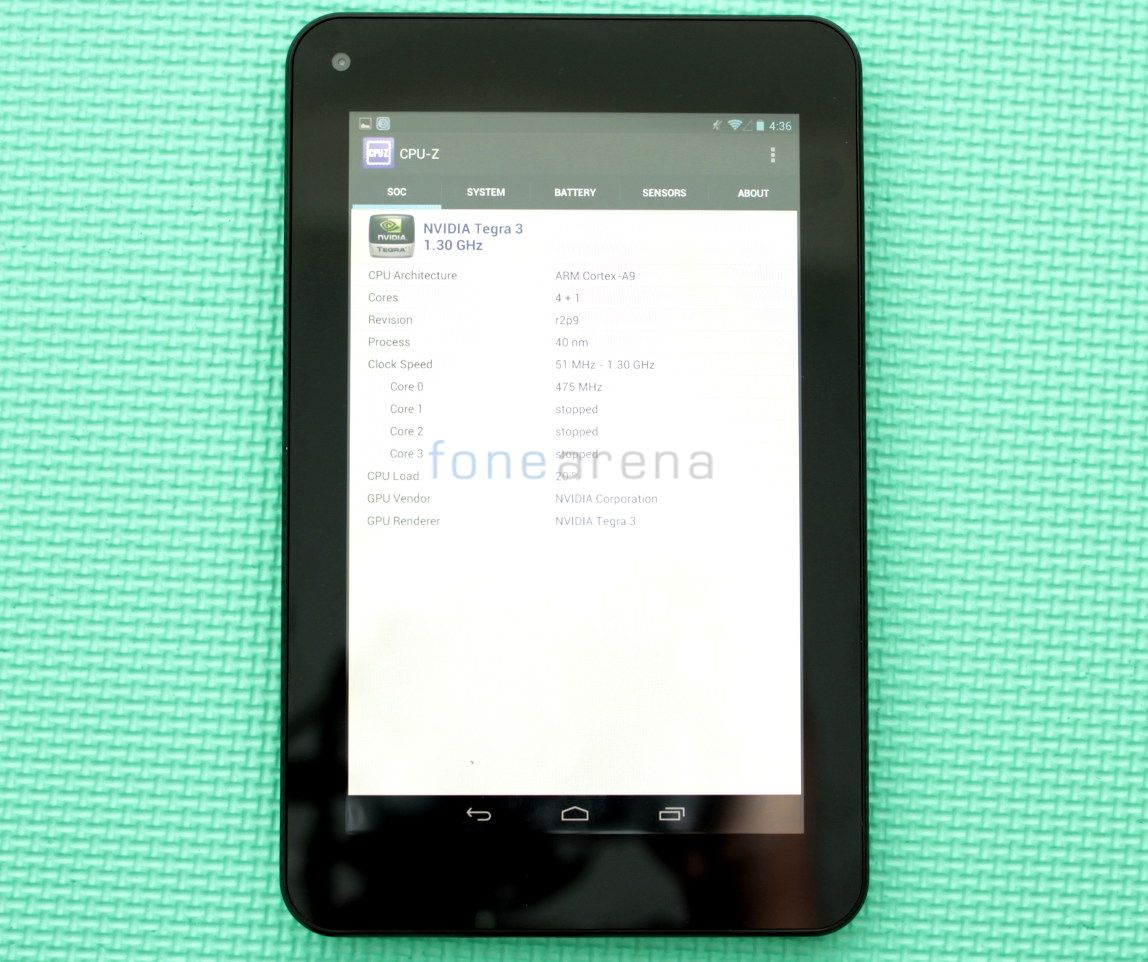 It is powered by a 1.3 GHz quad-core Nvidia Tegra 3 processor with 12 Core NVIDIA ULP GeForce GPU. The UI was smooth without any lags, but some apps including the browser did force close occasionally. Otherwise the performance is good. Check out the synthetic benchmark tests below. 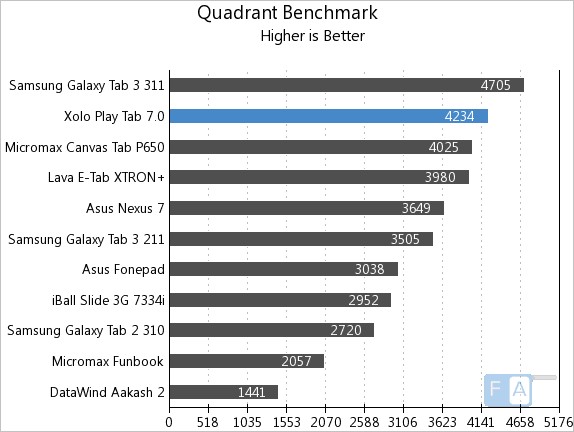 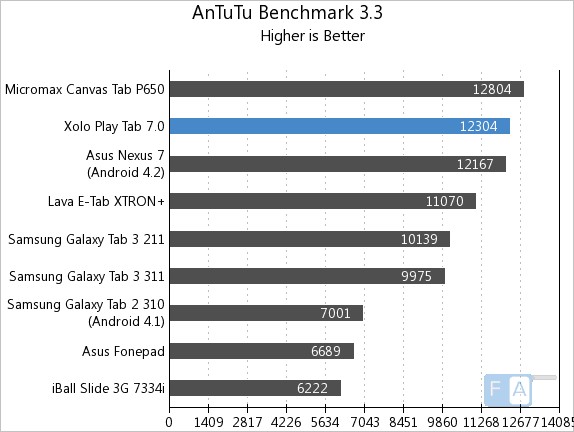 In the AnTuTu Benchmark 3.3, the Tab grabs the second spot again by scoring 12304 points. We also tested the AnTuTu 4 Benchmarks, In which it scored 13821 points. 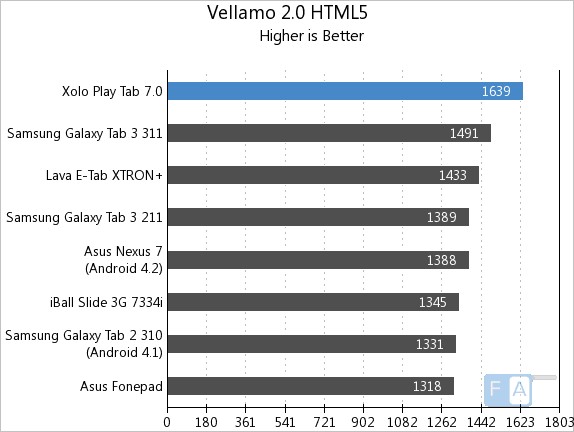 It tops the Vellamo 2 HTML5 browser benchmark with 1639 points. Check out the complete set of Xolo Play Tab 7.0 Benchmarks here.

Gaming was smooth without any lags and has graphics was good, thanks to the NVIDIA GeForce GPU. We even tried some games with PS3 controller, which worked perfectly. Check out the RipTide GP2 Gameplay below.

Check out the Gaming Review 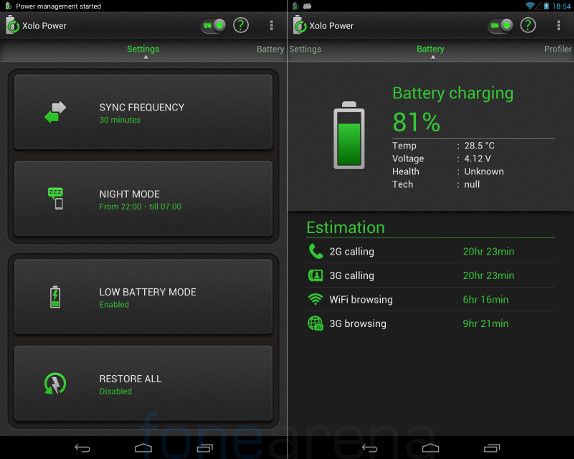 The tablet packs a 4000 mAh Lithium Polymer Battery, which lasts for about four and half to five hours with mixed usages of some music, browsing, video playback and gaming. Xolo promises up to 8 hours of battery life with continuous music playback using the internal speakers. You can use the pre-loaded Xolo Power app to improve the battery life.

Overall, the Xolo Play Tab 7.0 is a decent tablet. It also has GPS, which is rarely seen on WiFi-only tablets. Even though it comes with an SD card slot, you can’t move the apps to it, and it lacks an ambient light sensor to control the brightness. At a market price of Rs. 10,999, the tablet is a bit pricey, if you compare it with last year’s Nexus tablet, which now has Android 4.4 (KitKat) update. If you need a tablet with good build and performance, but can compromise on the display and old Android 4.1 OS, go for it.