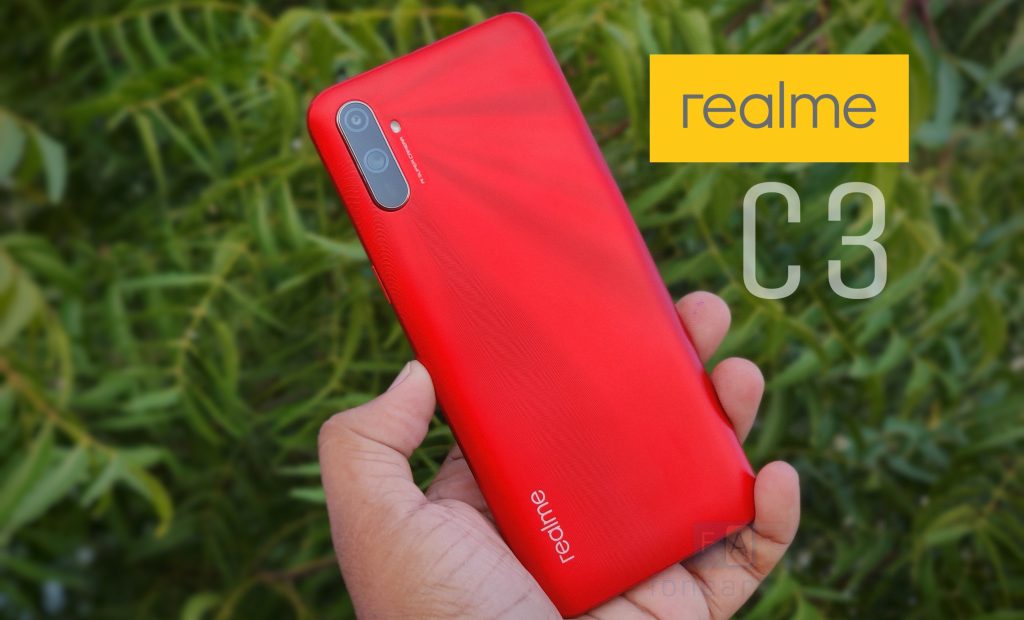 realme has been in a launch spree lately and the brand that was introduced under OPPO back in 2018 launched its first smartphone realme 1 before branching out from OPPO. Within a year, realme launched an array of smartphones and has devices in its portfolio to cater to a wide range of users. realme C2 which was launched last year was an entry-level offering from the brand and now, the company has launched its successor – realme C3. This time around, realme C3 brings major changes compared to realme C2, both internally and externally. Flaunting the new ‘Sunrise’ design, realme C3 is powered by the MediaTek Helio G70 chipset and is the first smartphone in India to feature this new chipset. We put the realme C3 through multiple tests and in this review, let us see if the C3 is worth your money or not. 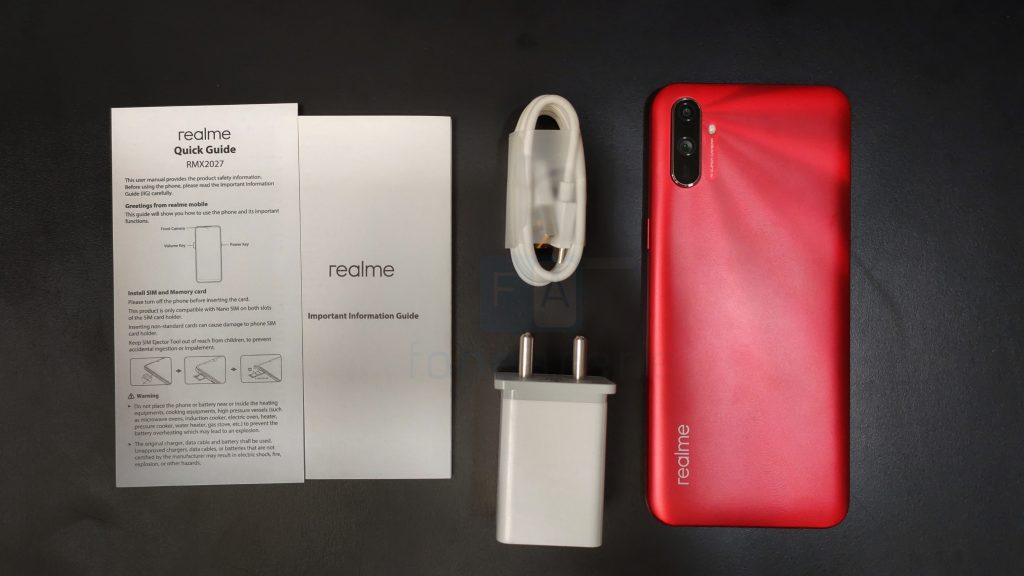 realme C3 adopts the new ‘Sunrise’ design that was first introduced on the realme 5i. The C3 comes in two color options – Blazing Red and Frozen Blue, and we got the Blazing Red color variant which looks stunning in that color. When it is held against the light, the top left portion in the back panel produces a nice sun-ray kind of pattern and it looks stunning. 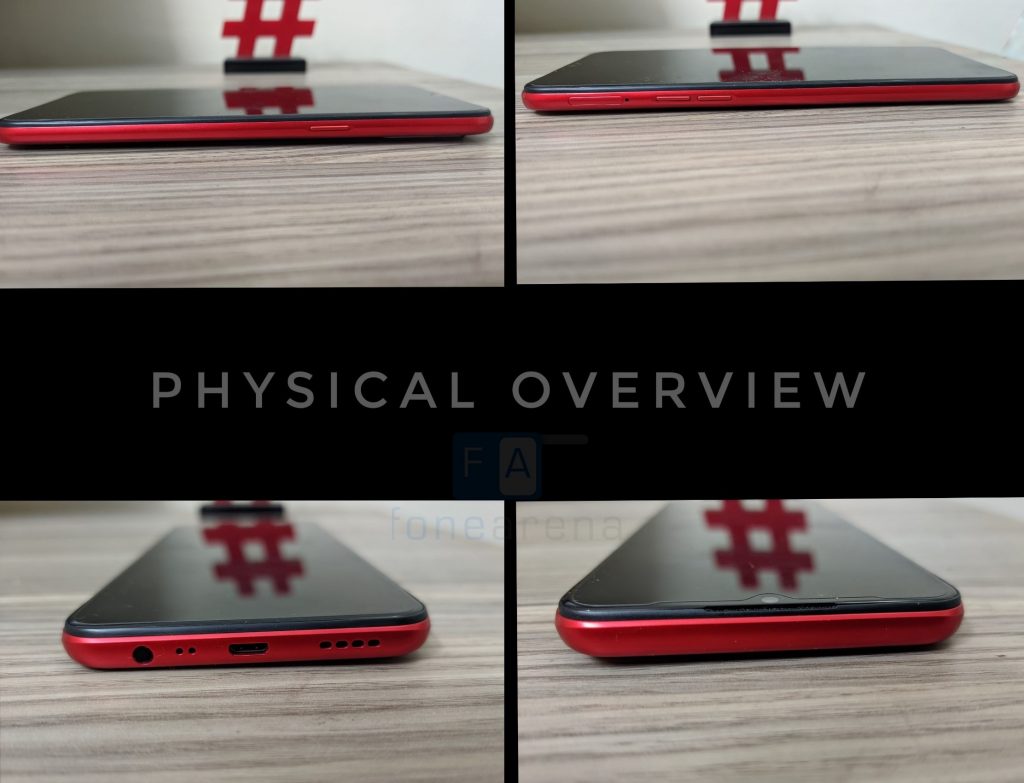 Regarding the physical overview, the volume rockers are present on the left side and the power button is present on the right side. The micro USB port, microphone, and the speaker grill are present at the bottom, and the top part is empty. To the back, there are dual rear cameras and similar to the realme C2, the C3 does not come with a fingerprint scanner. 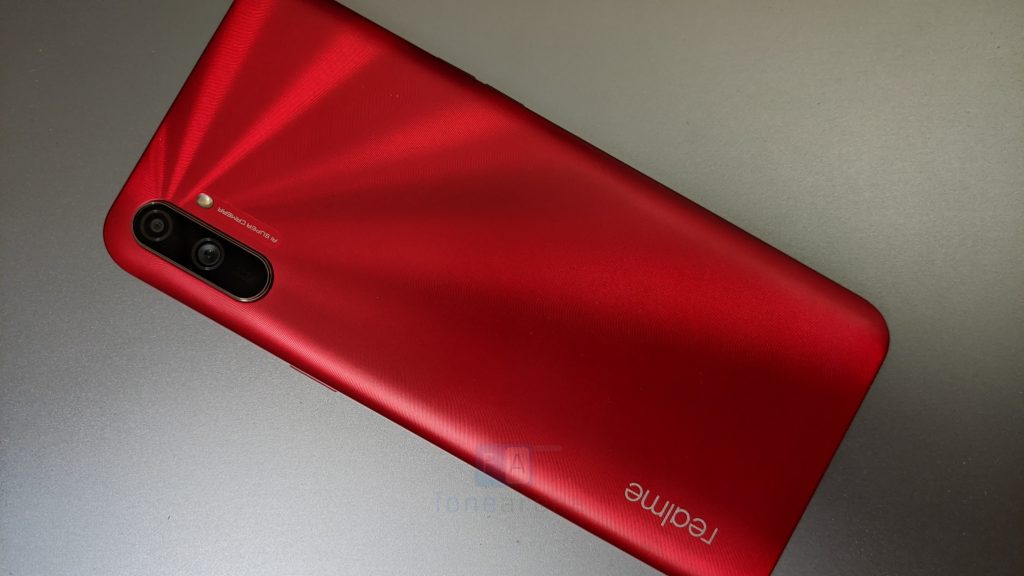 Coming to the build quality, the phone weighs around 195g and realme has done a good job with the design and the build quality. The build is quite solid and unlike the realme 5i which was top-heavy, the weight is evenly distributed on the C3. The refreshed back panel gives a solid grip and it should hold up for a long time without a case. Yes, this is refreshing as most smartphones come with a glass back (which is preferred by some users as well) and more often than not, a case is required.

realme C3 flaunts a 6.52-inch HD+ mini drop display with a resolution of 720 x 1600 pixels and 89.8% screen-to-body ratio. It is a 2.5D panel with 269 PPI and is protected by Corning Gorilla Glass 3. The mini drop notch is similar to other realme smartphones that have launched recently i.e., realme 5s and realme 5i. 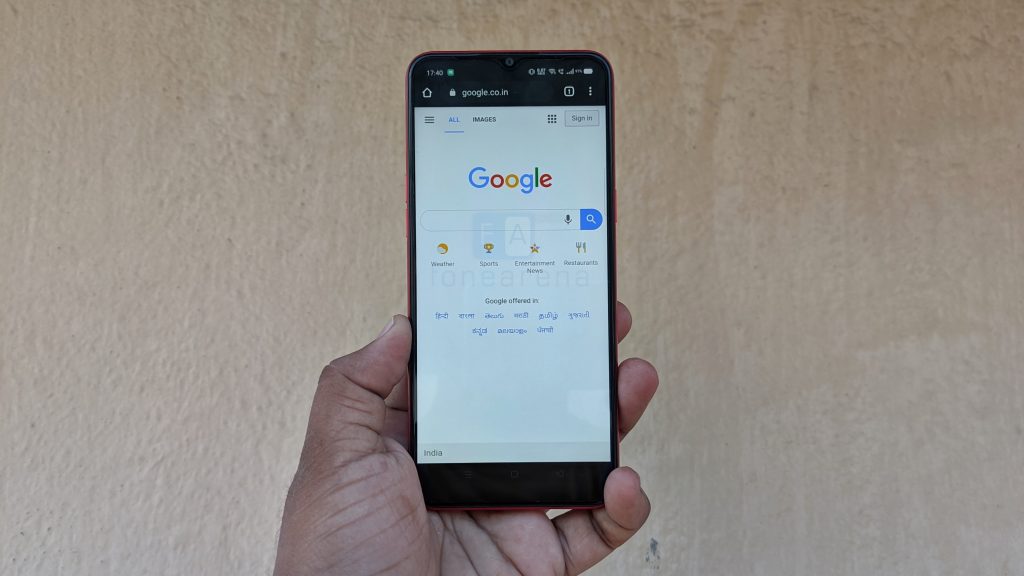 Coming to the display quality, it is the same HD+ panel that was used in realme 5s and realme 5i and the quality of the panel is quite good. The colors are vibrant with a decent amount of sharpness and you can adjust the color temperature with the three options — Cool, Default, and Warm provided under Settings. The colors are a tad better compared to the 5i but it is not the sharpest display that we have seen in this segment. Having said that, the peak brightness seems to be on the lower side compared to the 5s and 5i. In our review of realme 5s and realme 5i, we had mentioned the inconsistency in auto-brightness and thankfully, it was fine on the C3, and we didn’t face any issues with the same. 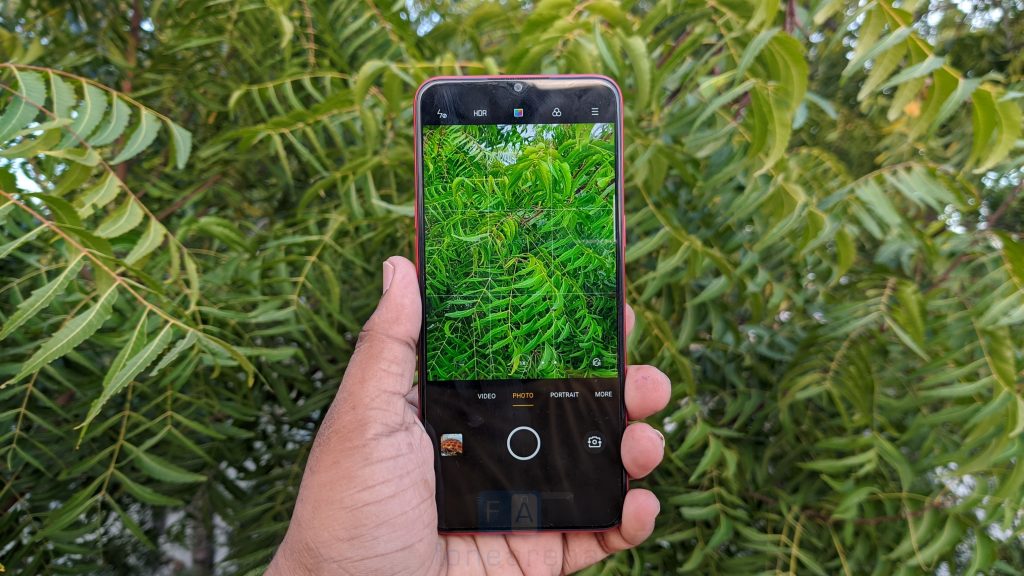 Coming to the image quality, in daylight and natural lighting conditions, the photos come out quite decent with a decent amount of detail. The colors are vibrant and the dynamic range is decent as well. The HDR mode is quite aggressive and the chroma boost tends to slightly over saturate the colors. The portrait mode works as expected and the edge detection is quite good as well. The pictures taken in artificial lighting and low lighting conditions aren’t that great and noise creeps in. In terms of video, it can shoot up to 1080p at 30 fps, slow-motion videos in 480p at 30 fps, and the quality of the footage is quite decent. The selfies from the front 5MP camera are strictly above average. Fortunately, there is full support for Camera2API including RAW support, but it to be seen if a working Google Camera port will be released by developers.

Overall, it is an average camera setup and this is not the best camera we have seen in this price segment. There is a lot of room for improvement, and we hope, the C3’s successor will pack better optics. Check out the camera samples below 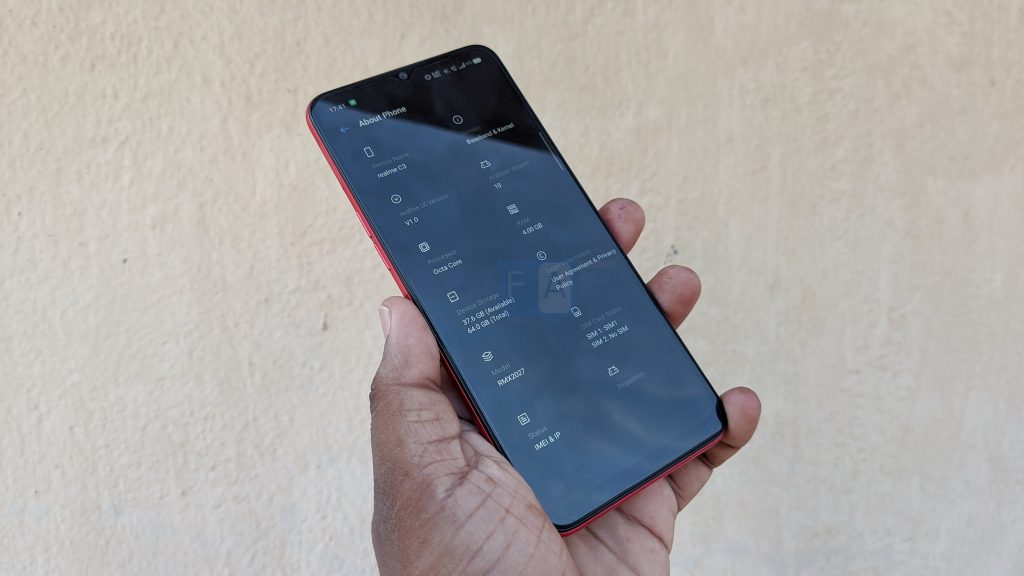 realme C3 is the first smartphone from the compare to come with pre-installed realme UI v1.0 with December 2019 security patch and the best part is, it runs on Android 10 out of the box. realme UI is on top of Color OS 7, but is a major departure in terms of design from Color OS 6 and comes with a revamped user interface, customizable icon style, animated wallpapers, dual earphone connection, personal information protection, focus mode, system-wide dark mode, screen recording with internal audio recording, smart sidebar, floating calculator, screen light effects, and more. We couldn’t find the dual earphone connection feature on the realme C3, and hopefully, it will be pushed through a software update. 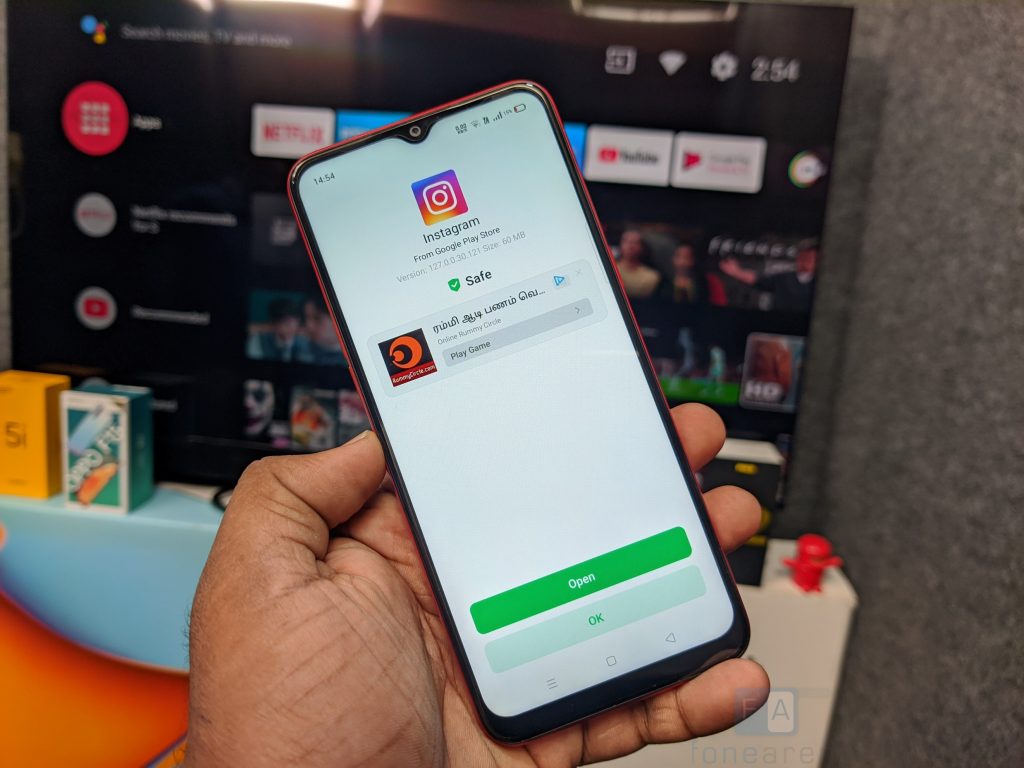 Back in December last year, realme announced that it will display “content recommendations” to realme users or in other words ads in certain parts of UI. On the realme C3, we encountered ads in the theme store and Security Check page when a new app was installed from the Play Store. The ads are not intrusive and thankfully, users can choose to turn it off by going to Settings -> Additional Settings -> Get Recommendations ->Turn off.

Unlike Color OS 6, realme UI on realme C3 does not come with a lot of bloatware which is a welcome change. Coming to video streaming, it does not have Widevine L1 certification and this means that you cannot enjoy HD content on NetFlix and Amazon Prime. Coming to the face unlock, it is fast and works as expected. 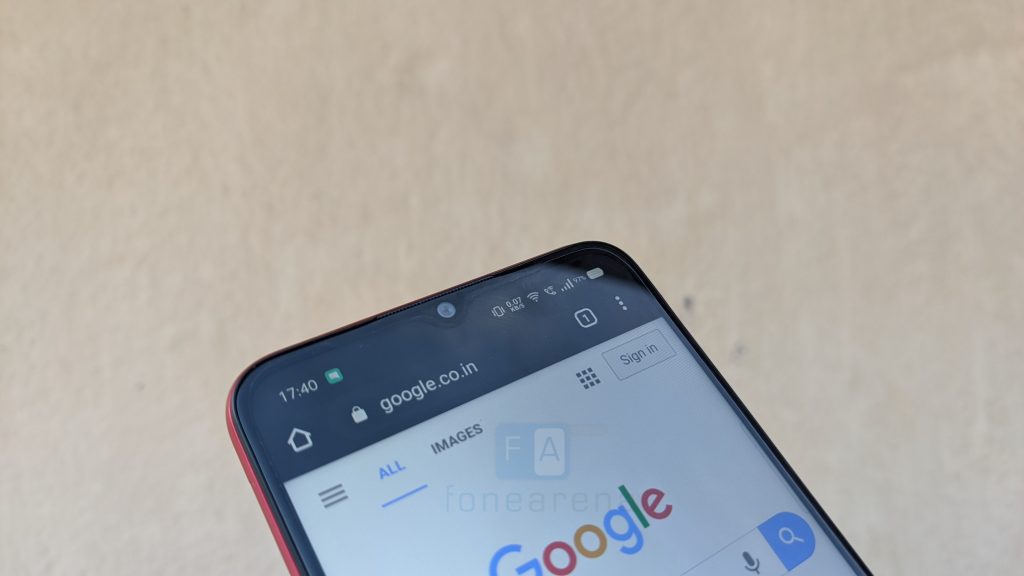 realme C3 supports Dual 4G SIM and has a dedicated micro SD card slot (expandable up to 256GB) as well. It doesn’t support Dual Band (5 GHz) Wi-Fi and supports only Wi-Fi 802.11 b/g/n standard. There is support for Bluetooth 5.0, GPS/ GLONASS, 4G VoLTE and Wi-Fi calling. We tested with Dual SIM cards and there were no issues with call quality, and it worked flawlessly. The Wi-Fi call quality was great as well and it works as expected. You can check out the list of smartphones that support Wi-Fi calling on Airtel and Jio.

Performance – It’s all about the G70 SoC! 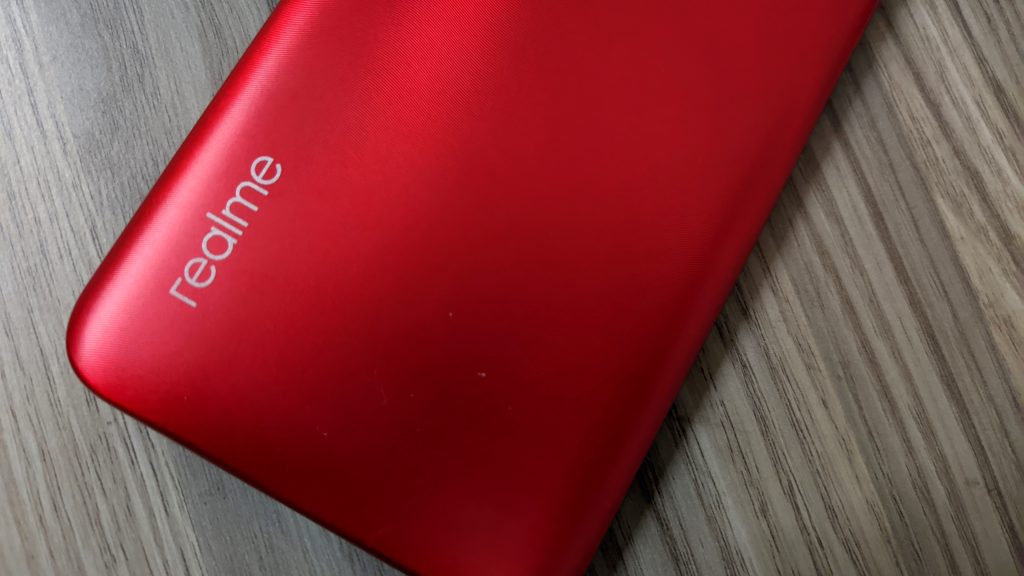 Before diving into how the G70 performs on the realme C3, let us go back to the launch of the MediaTek G Series chipset. For starters, MediaTek G Series chipset is primarily focussed on gaming and the company launched the top-end G90/G90T SoC last year and it was followed by G70 earlier this year and G80 earlier this month. While we already know how the G90T performed on the Redmi Note 8 Pro, let us see how the G70 SoC fared on the realme C3.

First off, we tested the realme C3 with casual apps used day-to-day, and we did not encounter any sort of lag or whatsoever. The apps were quick to load and respond, and this time around, the performance with casual apps was way better than the realme 5s and realme 5i which are powered by Qualcomm Snapdragon 665 Mobile Platform. In case you missed, in our review of realme 5s, we had mentioned the inconsistent performance issue. In the multitasking department, the C3 handled it with ease as well as multitasking was smooth and thanks to 4GB of RAM, the C3 retained most apps in memory before reloading it. With heavy apps like Adobe Premiere Rush, the rendering times were not the fastest, but the C3 handled it much better than expected, considering this is a Rs. 7999 phone. Overall, with regard to CPU performance, realme C3 was quite good.

Coming to gaming performance, we tested the C3 with casual games like Alto’s Odyssey, Crossy Road and also tested with graphic intensive games like PUBG Mobile, Call of Duty, Asphalt 9 Legends, etc. Casual games ran fine without any issues and C3 handled it with ease. With PUBG Mobile on realme C3, it runs in HD graphics by default, and the gameplay was quite smooth as well. It clearly outperforms similar offerings in this price segment. When it comes to Call of Duty, the experience was a mixed bag. It runs on Low graphics by default and there is no option to change the graphic quality, and it is most likely an optimization issue. Similarly, with Asphalt 9 Legends, the game playback was amazing for the most part, but the C3 struggled at times in rendering graphics at times, especially during drifts and 360-degree spin. The loudspeaker quality was great as well and sound output was loud and clear.

Moving on to the thermals, there were no signs of overheating exhibited by the C3 and the maximum temperature recorded in our testing was 40.8 °C. Yes, you will feel the warmth around the rear camera module, but as mentioned earlier, there were no signs of overheating. For heat dissipation, realme has included Dual-layer graphite + copper foil. Overall, if you ask me, as of writing this article, realme C3 is the best budget gaming smartphone. Having said that, Redmi is also coming up with a new smartphone (could be Redmi 9A) and it is expected to be powered by the Helio G70/Helio G80 chipset as well, and could be a competitor to the realme C3.

Check out the benchmark results below 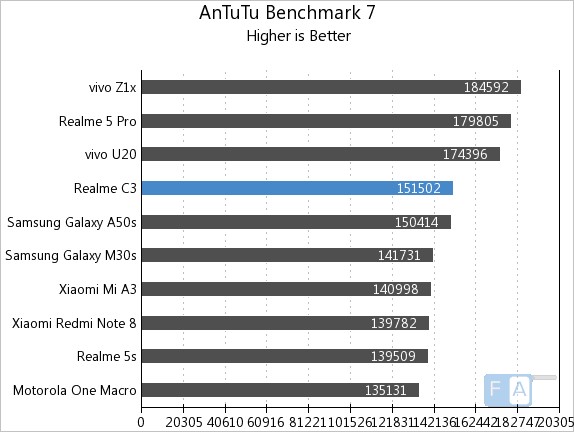 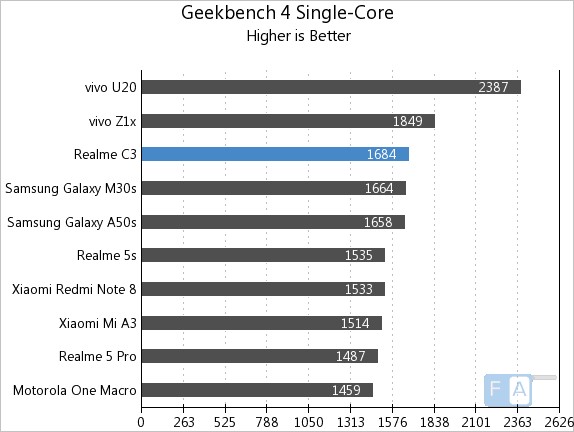 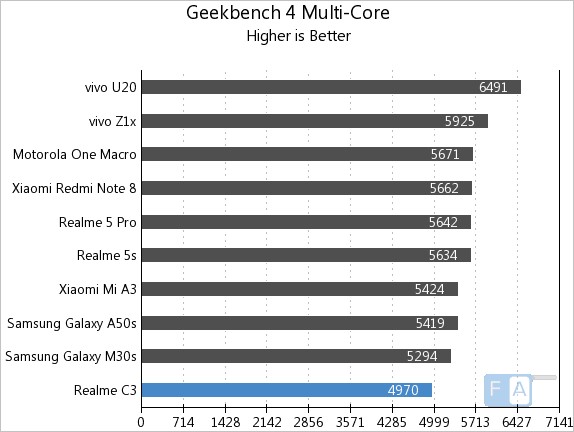 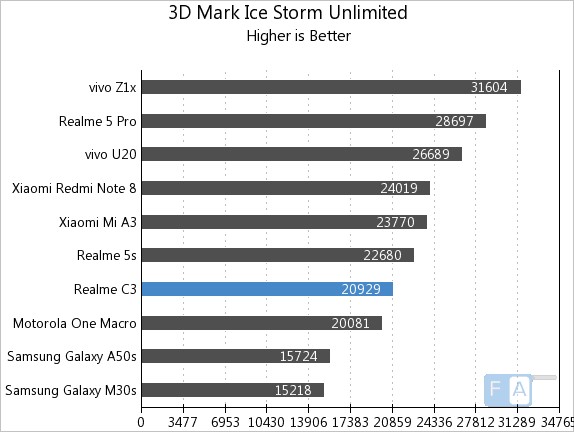 realme C3 packs a 5000mAh battery, a 1000mAh jump from the realme C2 which packed a 4000mAh battery. In terms of battery life, realme C3 can last one and a half days easily with casual usage and with moderate to heavy usage, it can last around 18-19 hours on a single charge. It comes with a 10W charger and takes over 3 hours to charge from 0 to 100% through the micro USB port. Here’s a detailed charging time test carried out in our labs. 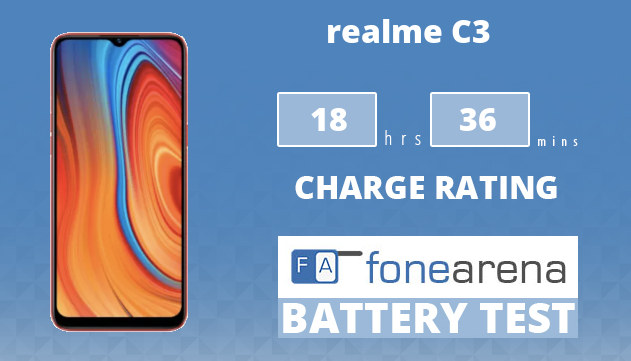 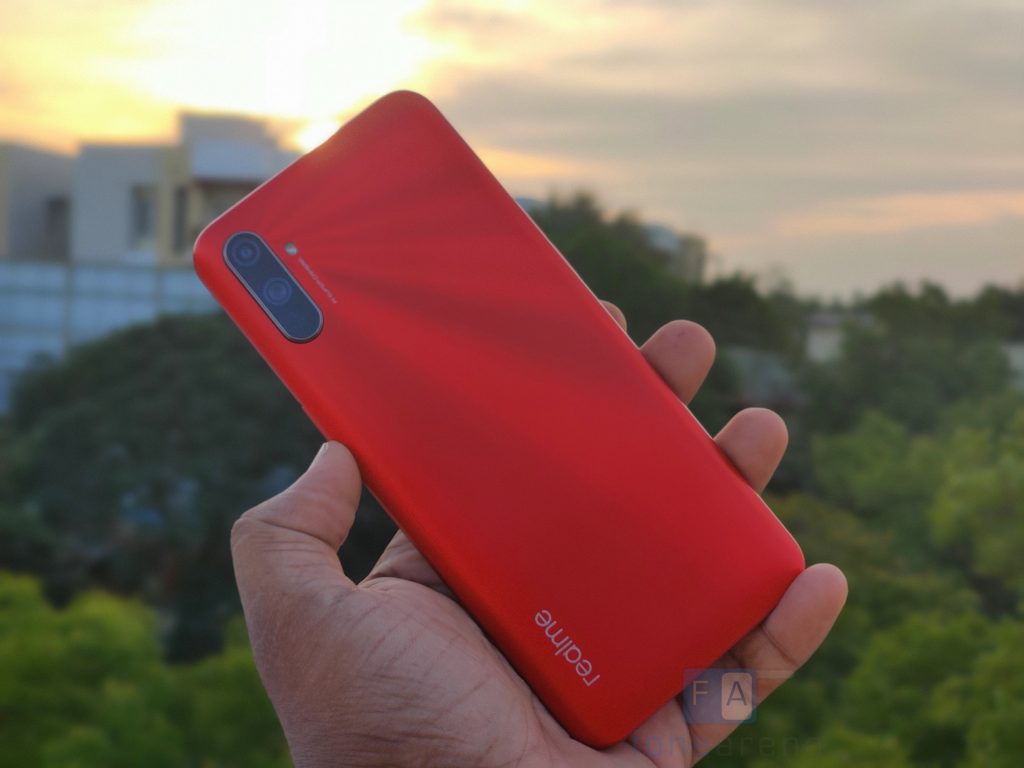 realme C3 is a major upgrade from the realme C2, primarily on the internals. The Helio G70 chipset from MediaTek performs great, especially in gaming and is fast and snappy in day to day usage as well. The new ‘Sunrise’ design is a welcome addition as well and is refreshing. So, should you the realme C3? If you are looking to buy a budget smartphone with good performance and great gaming experience, realme C3 won’t disappoint you and is definitely recommended. It gets most things right with a few cons as well, and this time, realme + MediaTek combination has worked out well. realme C3 is the third smartphone in realme C series and in short, third time’s the charm!