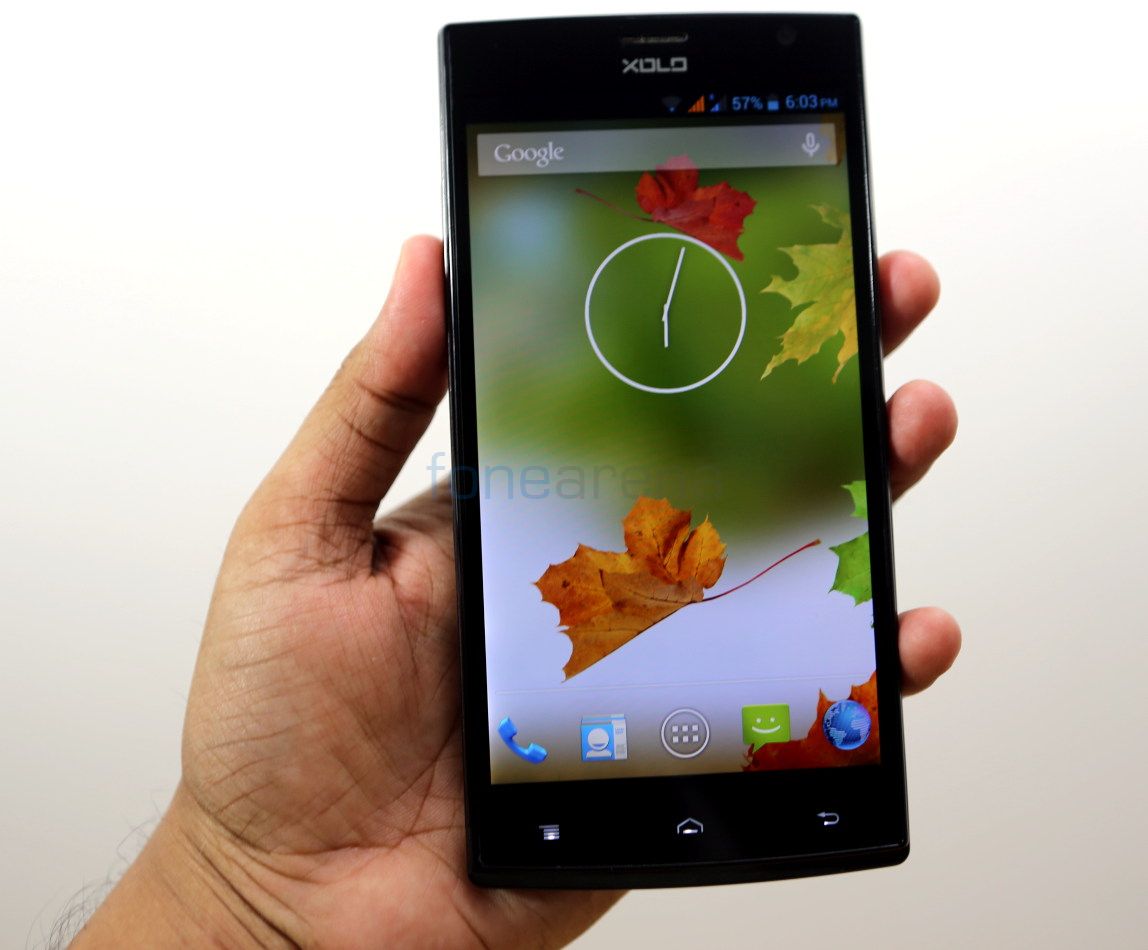 Xolo launched the Q2000, the company’s first large-screen smartphone with a 5.5-inch last month. The company had already launched the Q1000 and the Q1000S with a 5-inch HD display, but the Q2000 comes with a 5.5-inch 720p display and a completely new design. We already brought you the unboxing, benchmarks and the photo gallery of the device. Here we have the complete review of the smartphone. We reviewed the Spice Pinnacle Stylus and the Micromax Canvas Doodle 2 with HD displays recently. How good is the Q2000 against its competition? Let us find out in the complete review. 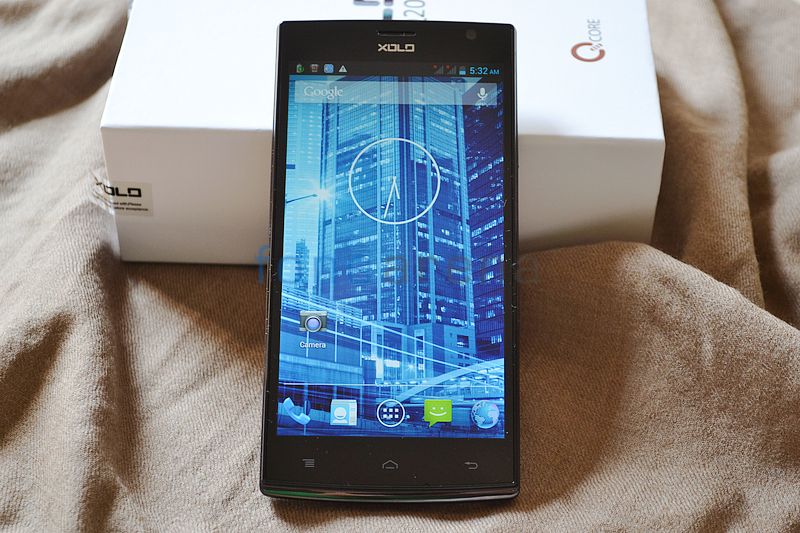 We unboxed the device recently. Check out the unboxing video. 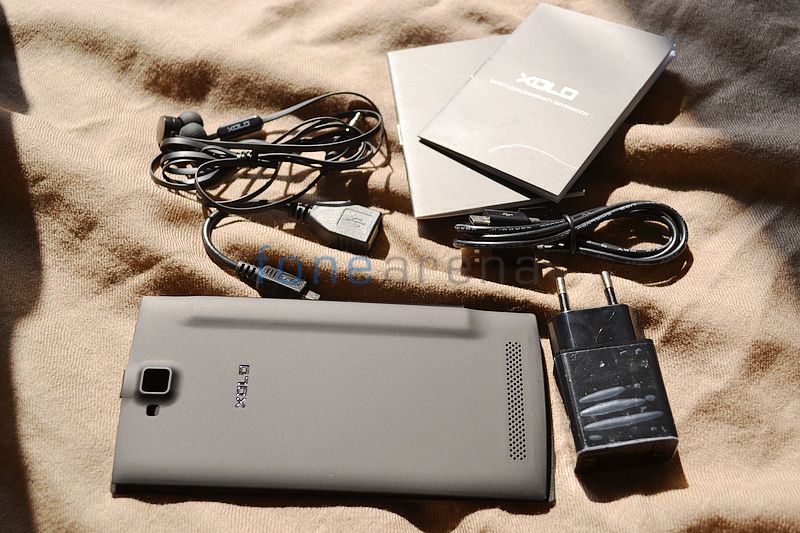 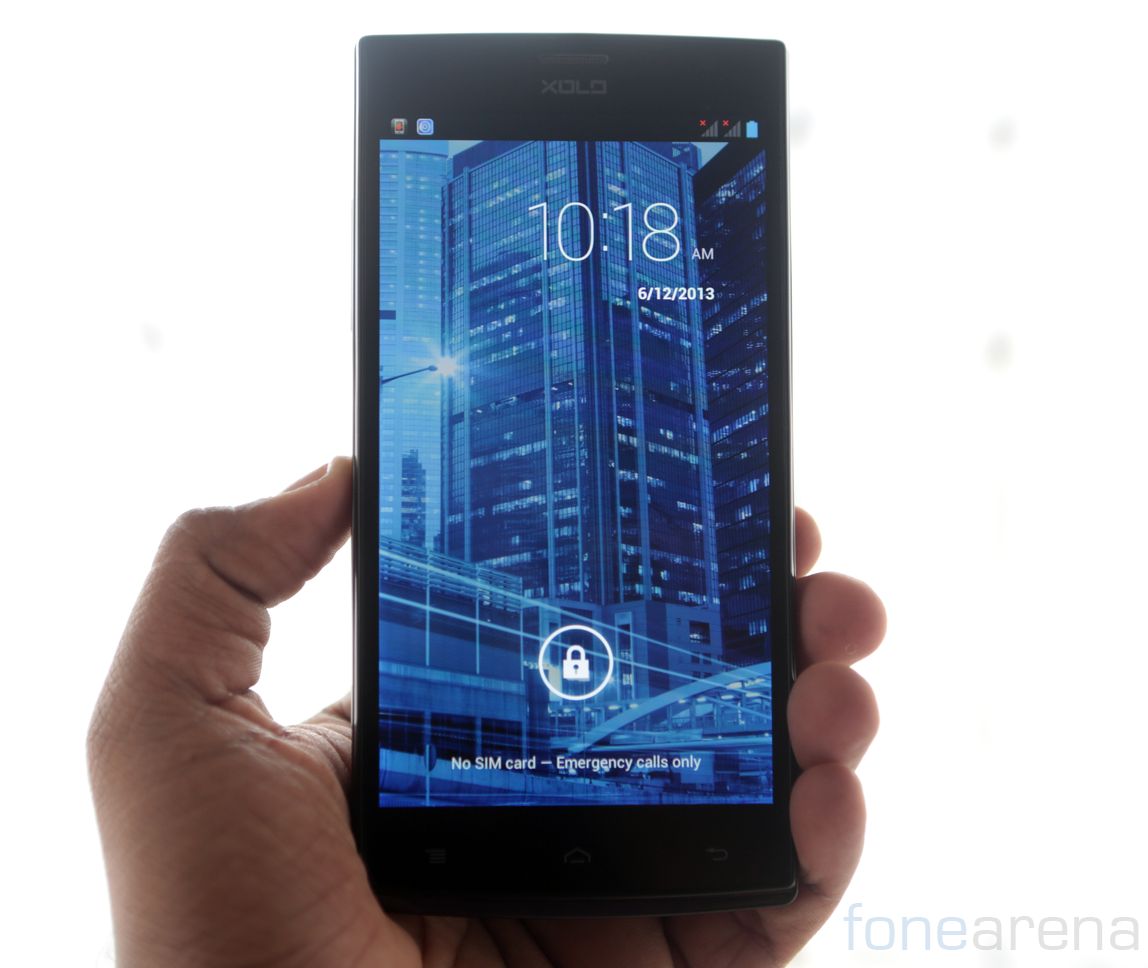 The 5.5-inch display with a resolution of 1280 x 720 pixels at 267 ppi is bright, but it is very glossy for outdoor usage since the screen is highly reflective. Otherwise the display is good with vibrant color output and has decent viewing angles. Since it is glossy, it is also prone to fingerprints. You can use the bundled protection cover to protect the screen from fingerprints and scratches. 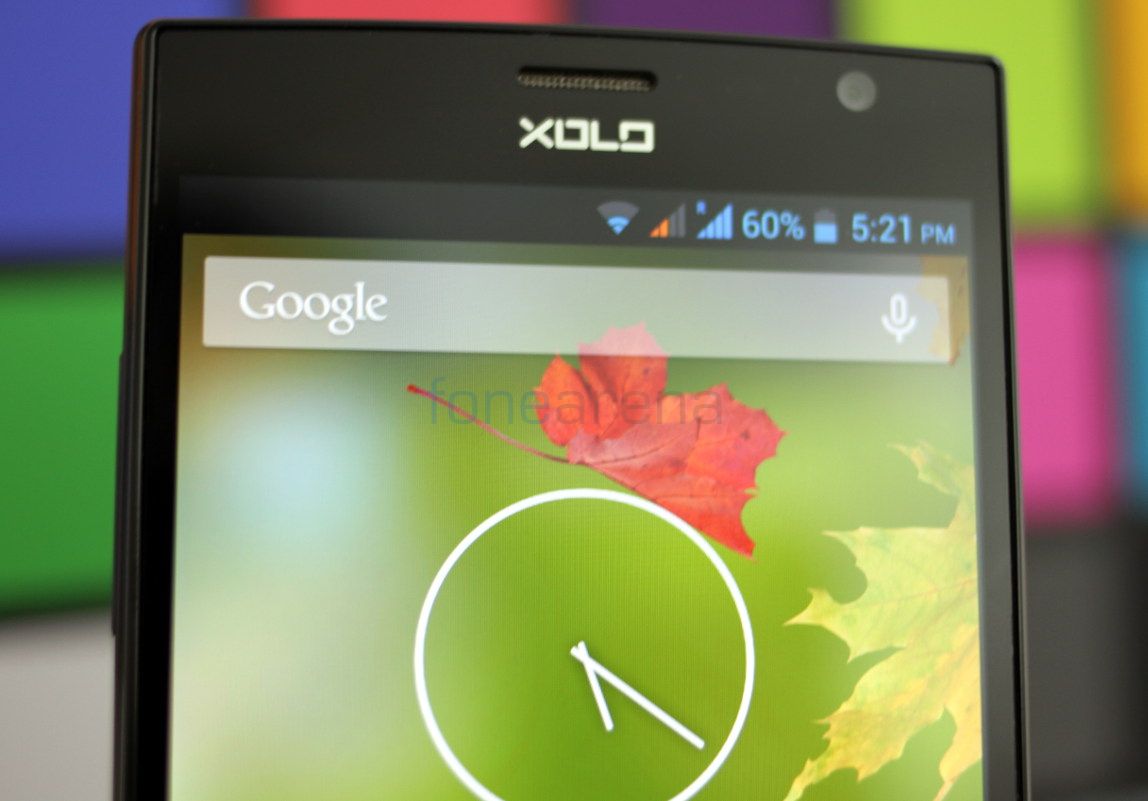 It features a 2-megapixel front-facing camera that is capable of recording videos at VGA (640 x 480 pixels) resolution. Next to the camera are the usual set of proximity and ambient light sensors. 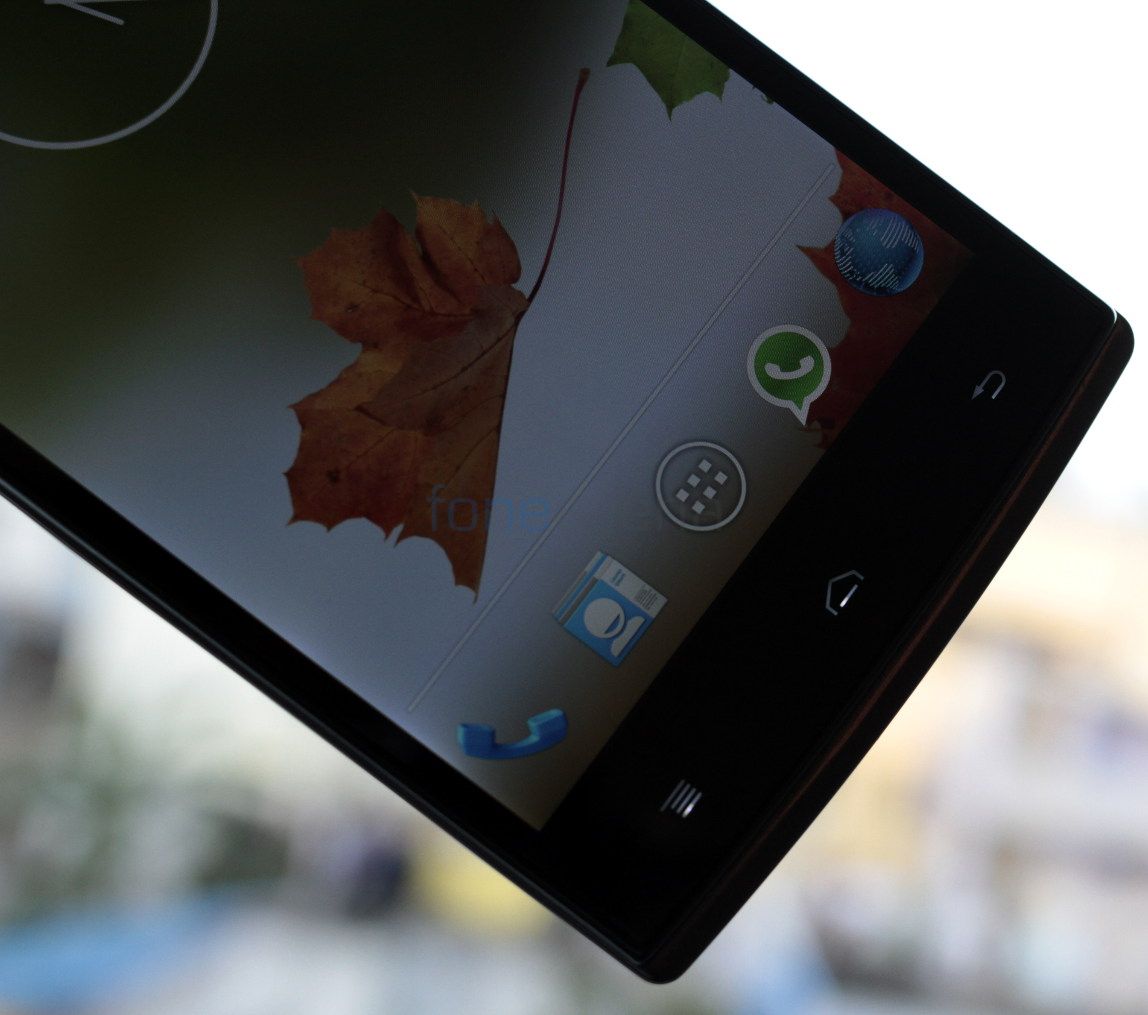 You can see the usual set of capacitive touch buttons for menu, home and back, below the display. These are backlit and offer haptic feedback. 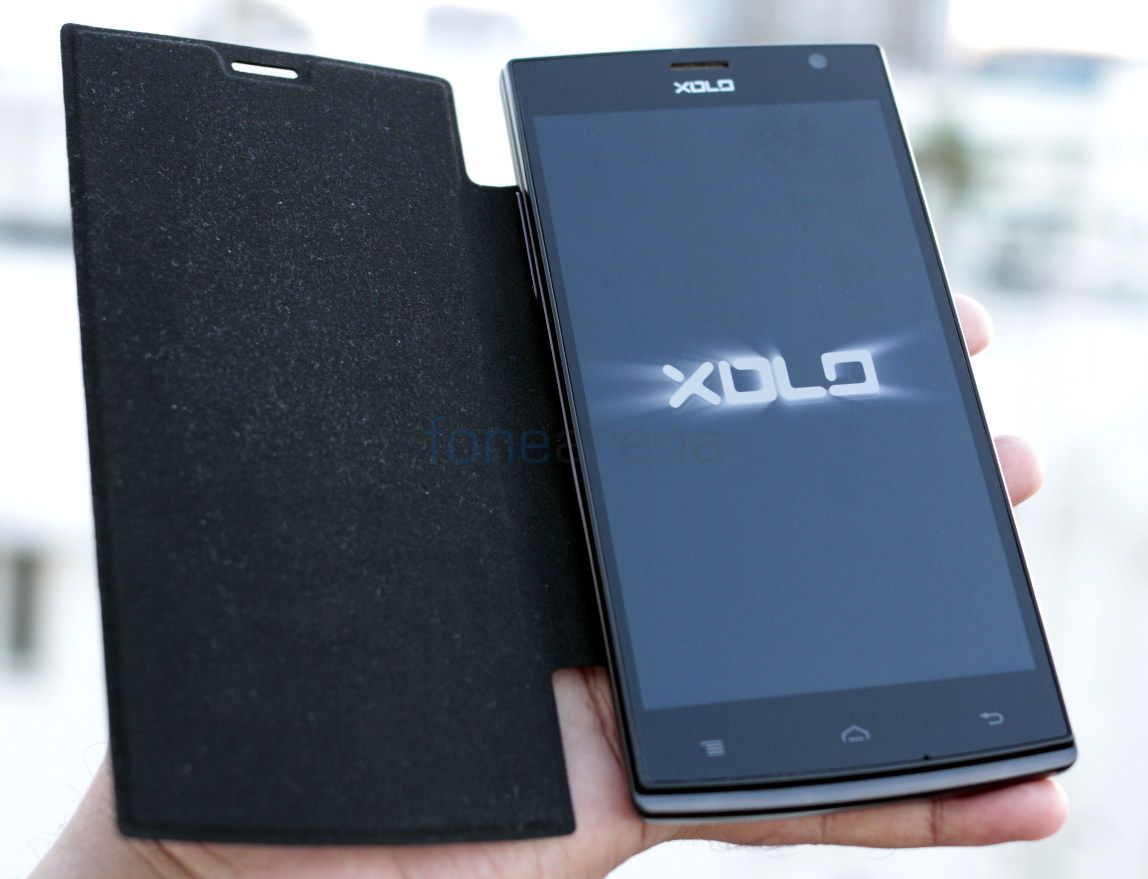 You can see a tiny microphone hole below these touch buttons. The design of the Q2000 is quite different from other Xolo phones. It has a tiny chin that protrudes out on the bottom of the phone, similar to the Oppo find 5. Since there is a gap on the top and the bottom, between the screen and the frame, it gathers dust in the gap. The Q2000 also comes with a protective flip cover with smooth finish on the outside and a soft surface on the inside protects the screen. 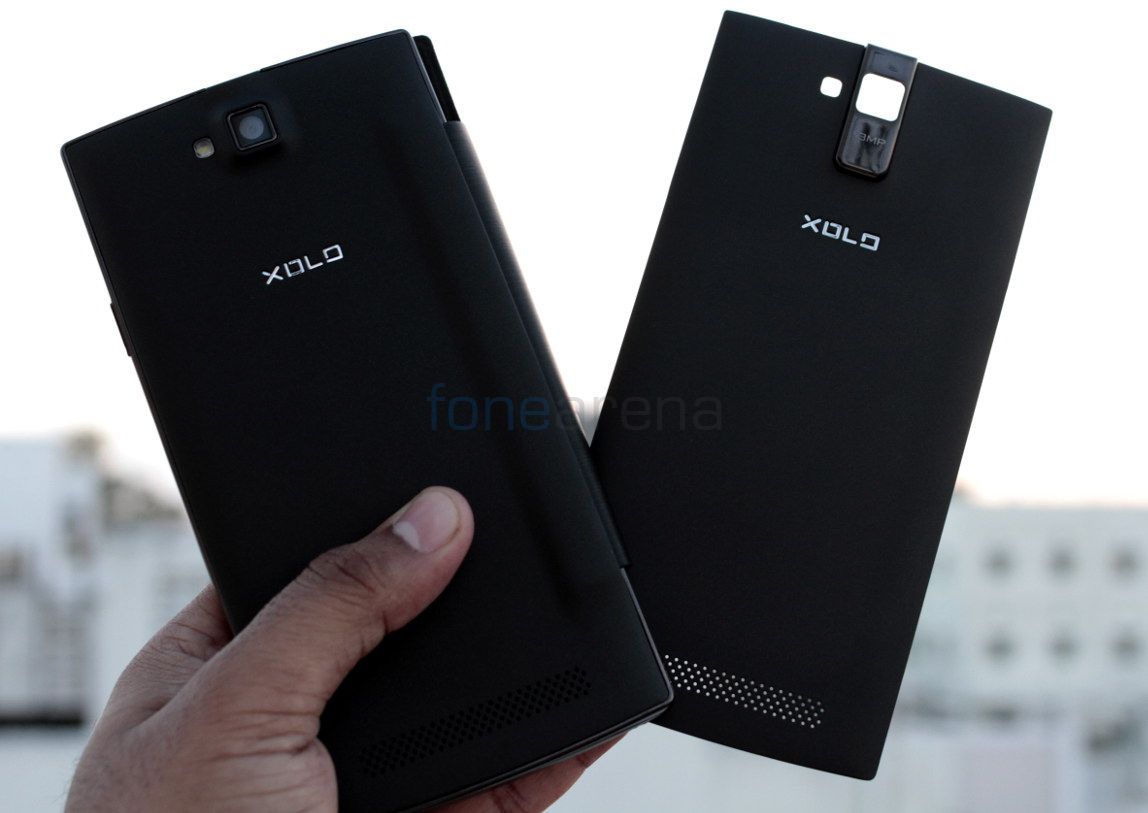 Both the back cover and the flip cover have a smooth matte finish on the back, that gives the device a premium feel. 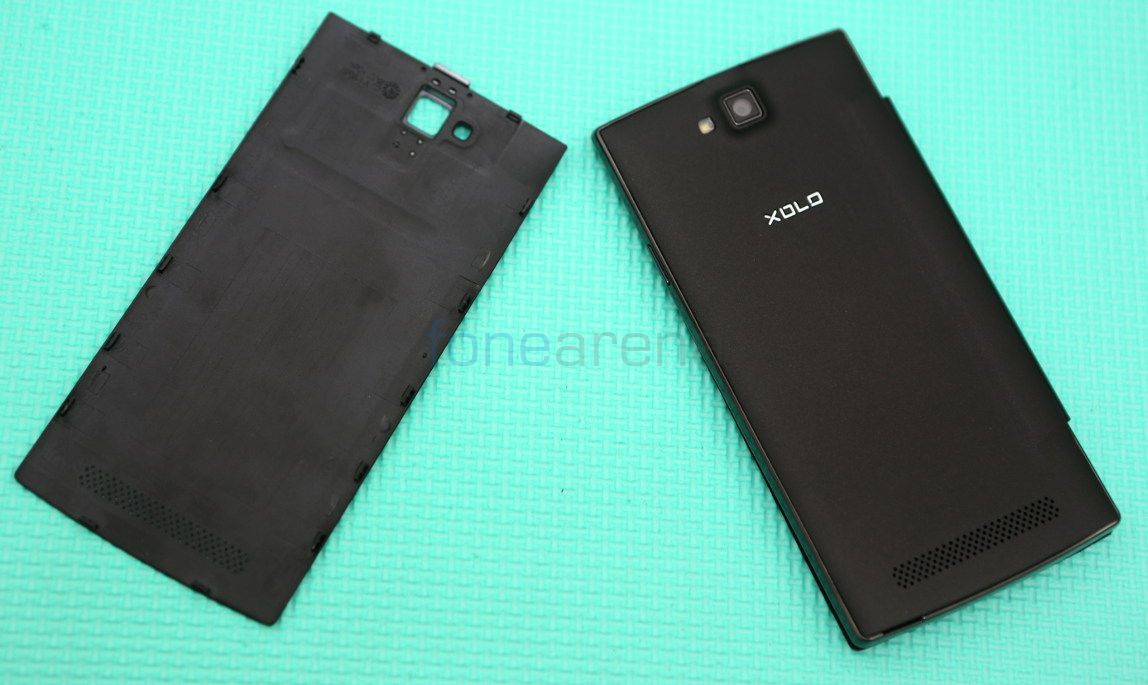 These are actually made of thin flexible plastic, as you can see from the image above. Both the back cover and the flip covers are hard to remove and replace, so better stick with the flip cover, which is quite good without the plastic hump on the back. 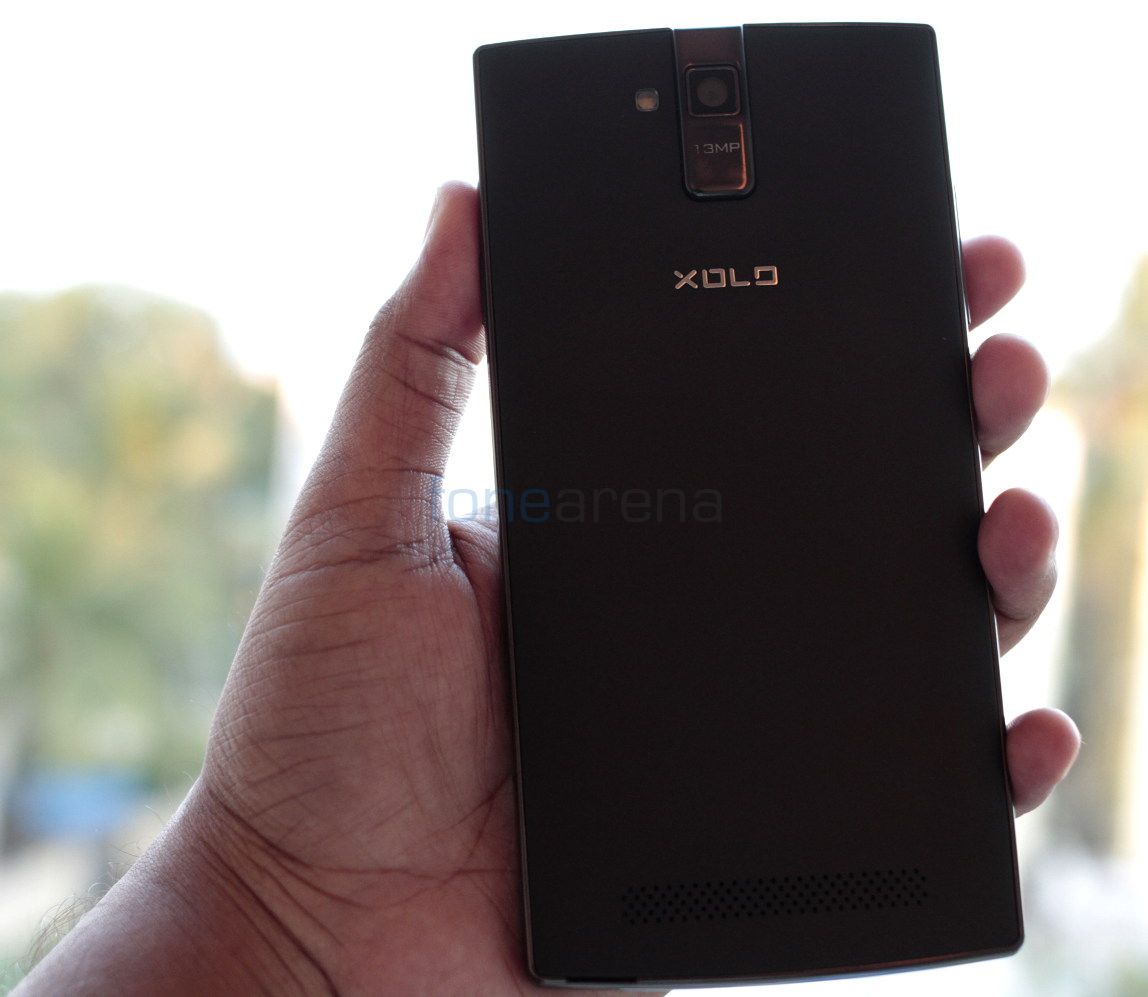 The device is definitely huge to hold. It has a width of 77.8mm, which is a bit smaller than the Spice Pinnacle stylus and the Micromax Doodle 2, but you can’t expect a phone with a 5.5-inch screen in a small frame. Even though the phone doesn’t have a metal build, it weighs 180 grams. 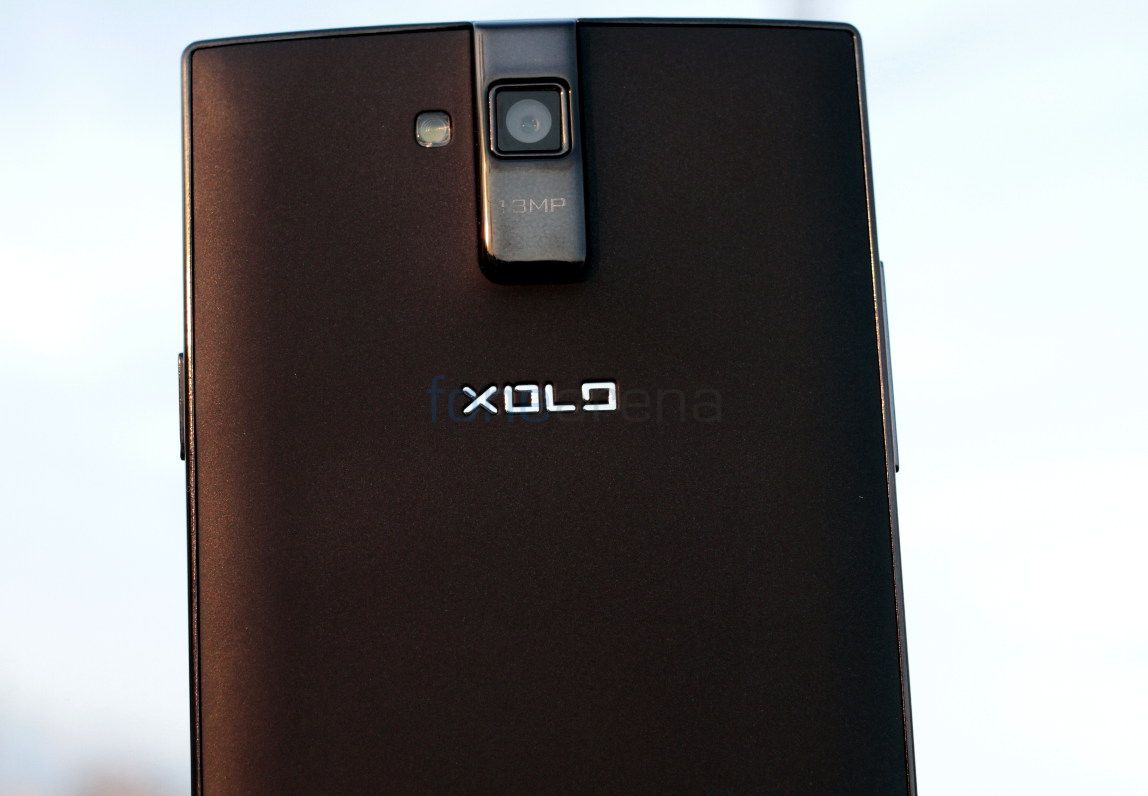 There is a 13-megapixel camera on the back with LED flash and a BSI 2 sensor, similar to the Q1000S. As you can see from the image above, there is a little bulge on the top due to the presence of the large camera module. There is a shiny flat plastic around the camera, which actually comes with the back cover. This is not present on the flip cover. Since the lens has a tiny chrome ring around it, the camera doesn’t get scratched when you place it on a flat surface. 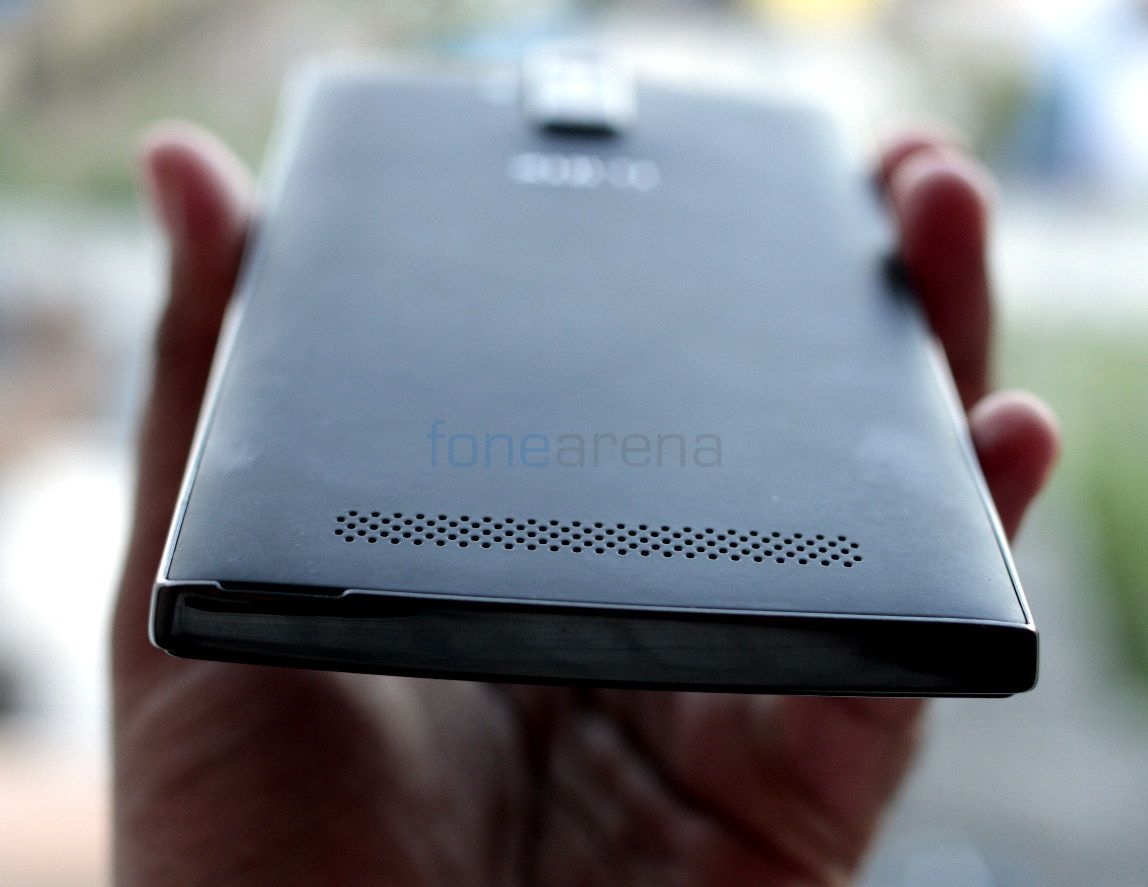 There is a large loudspeaker grill on the bottom. 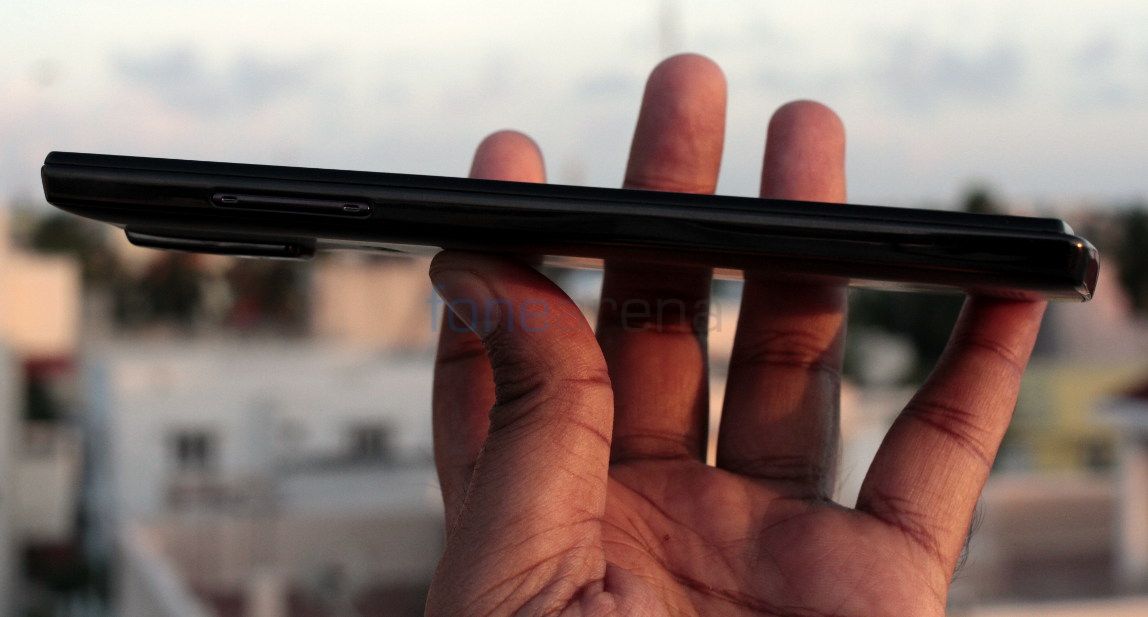 Even though the phone has matte finish on the back, the sides have a glossy plastic build, making it a fingerprint magnet. On the left side you have the volume rockers. 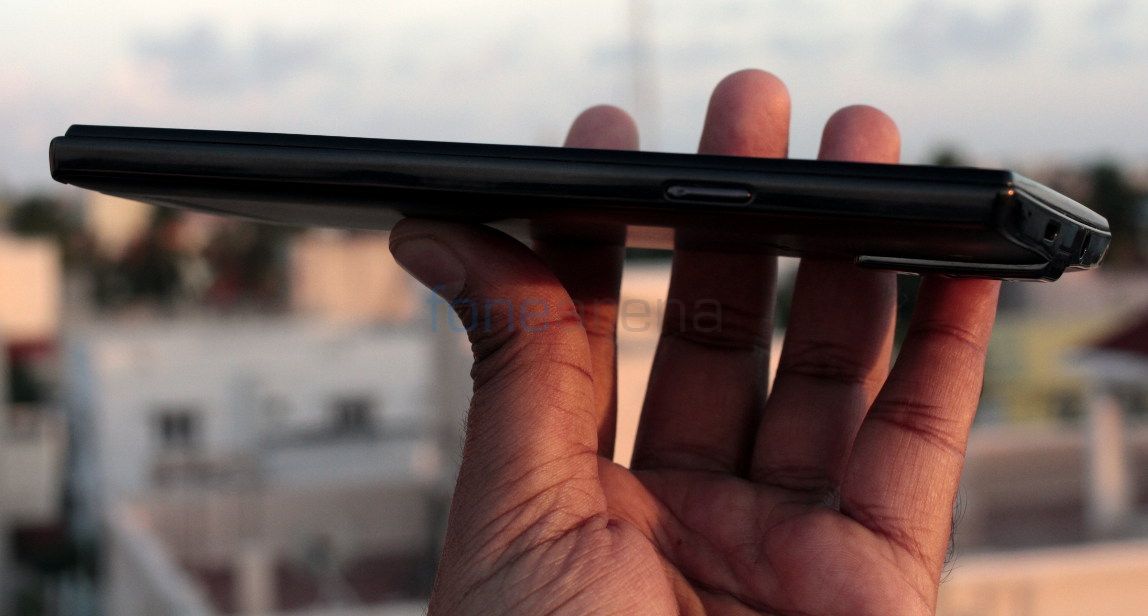 On the other side there is a power button. Since the button is not present in the middle, it would be a bit hard to reach for people with small hands. Even though the sides are shiny and slippery, the matte back gives you a perfect grip to hold the phone steadily for single-handed usage. 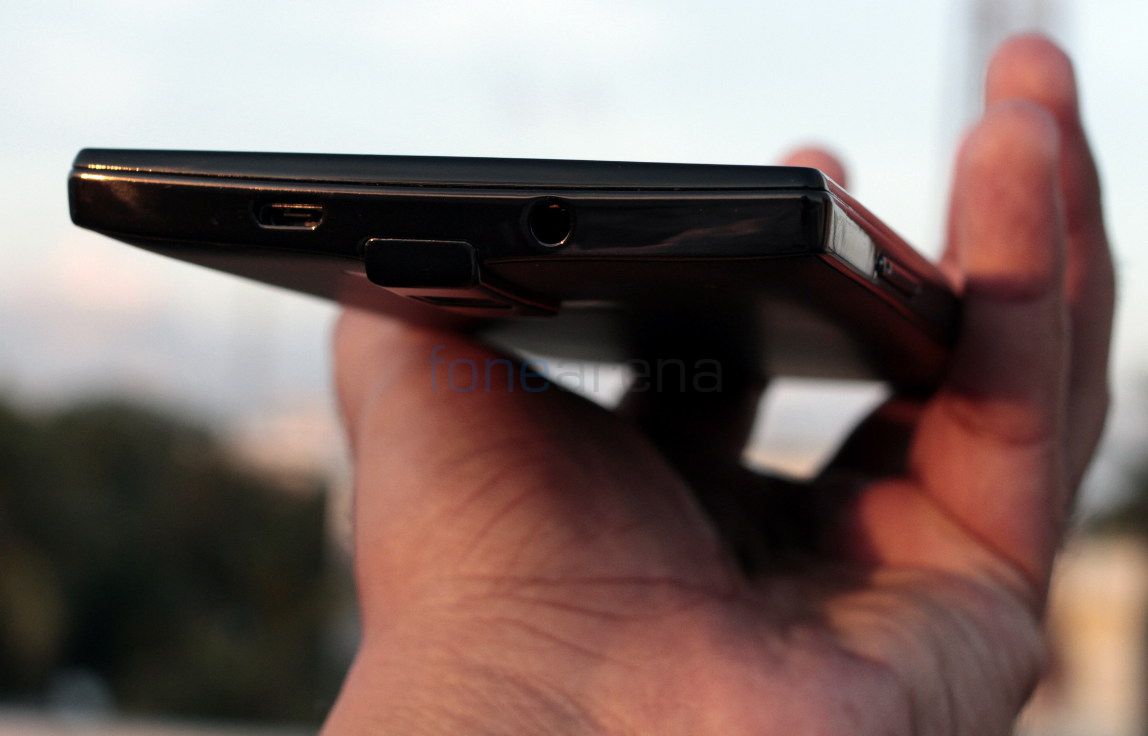 The 3.5mm audio jack and the micro USB slot are present on the top. The top and the bottom of the phone are slightly curved. 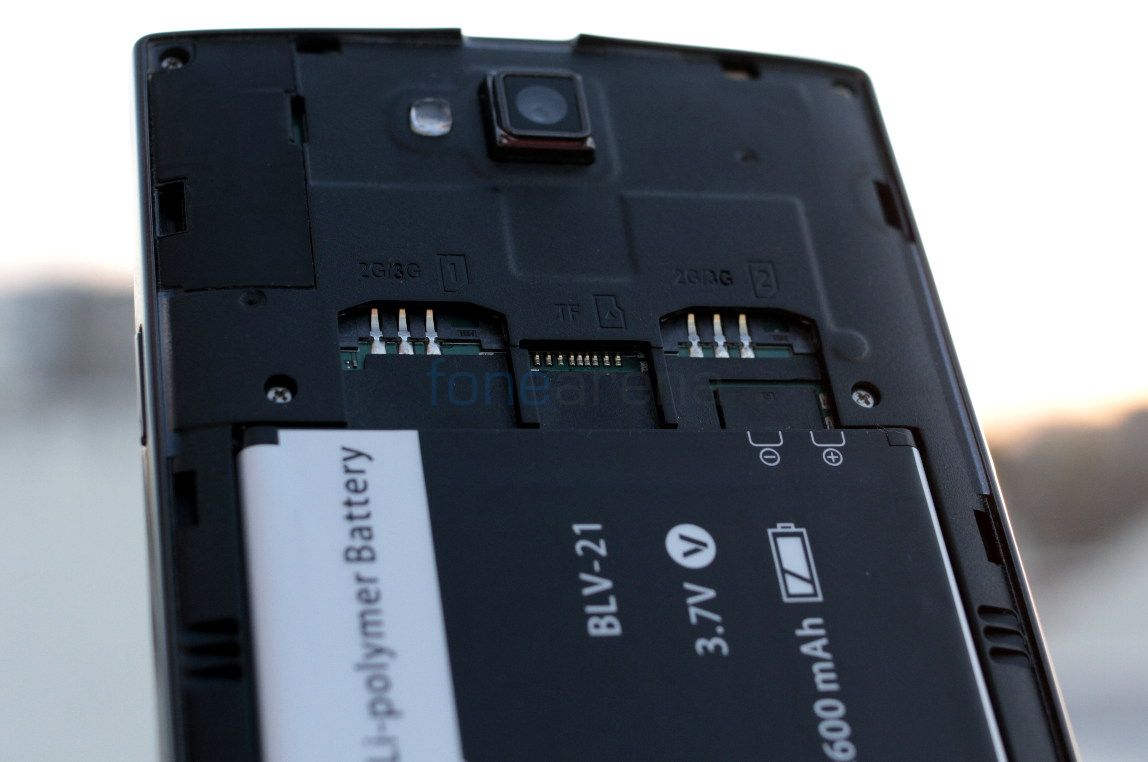 On the back you can see the SIM card slots and a micro SD card slot, once you open the plastic back cover. The phone uses standard SIM card. Both these SIM cards support 3G connectivity. It accepts micro SD cards up to 32GB. 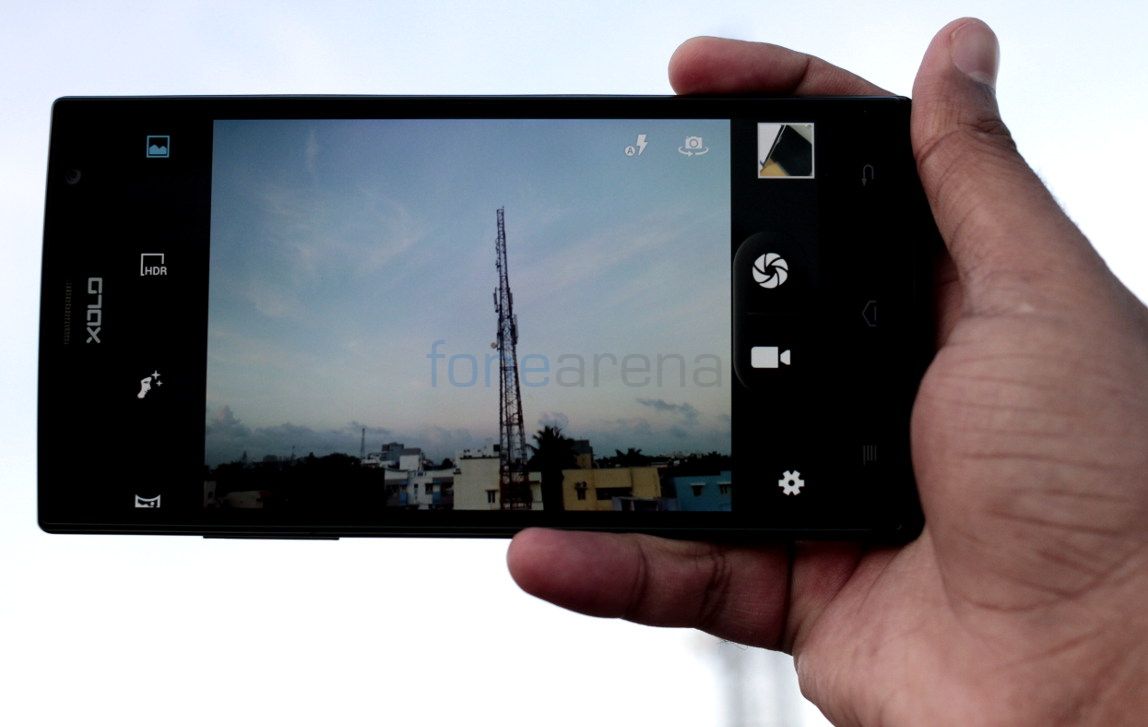 The 13-megapixel camera module with BSI 2 sensor might be different from what Xolo had used in the Q1000S. Unlike the 13.3MP sensor in the Q1000S, this has 12.5MP sensor that can capture images at a resolution of 4096 x 3072 in 4:3 aspect ratio. It can also capture images in 16:9 aspect ratio but the image resolution is reduced to a maximum size of 6-megapixels. The camera UI is similar to most of the Android 4.2  smartphones from other OEMs with a navigation bar on the left pane that lets you change the different camera modes including HDR, Panorama, Smile shutter and more. Continuous shot option lets you capture 10,20 or 40 shots continuously.

Daylight shots were good, but did lack some details. Check out some daylight samples

It took some time to focus to get a perfect macro shot, but it came out pretty good. Here are some macro shots

HDR images were decent with vibrant colors. Here are some HDR samples

Even though the phone has a Back Side Illumination (BSI) 2 sensor, low-light images were below average with a lot of noise. Flash does help a bit in low-light, but the images still have a lot of noise.

Overall the camera is decent compared to other phones in this price range. The phone can record videos at 1080p Full HD resolution. Videos looks decent, but it could be better with more details. Since the phone lacks a secondary microphone the audio not crisp and was bit choppy. It has Electronic image stabilization (EIS) feature that uses software enhancements to minimize blurring and device shake, similar to most of the smartphones. 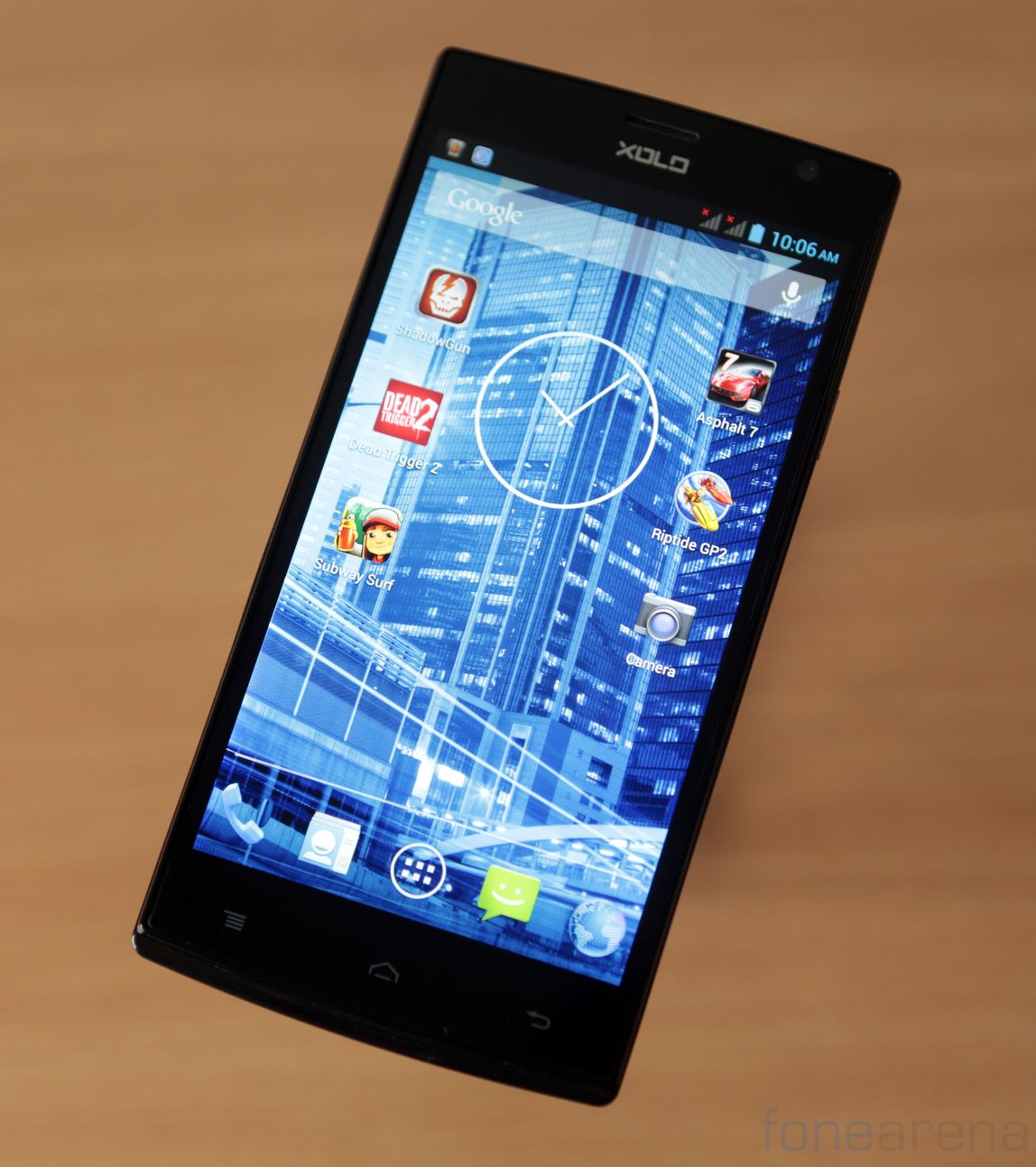 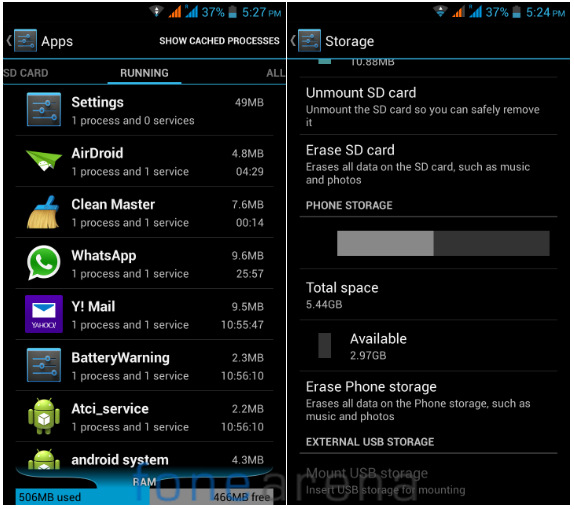 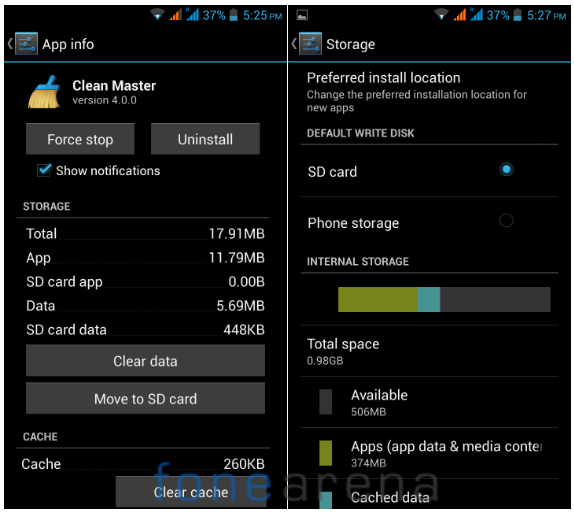 You can also move apps from the internal memory to SD card, once you insert one. You can also set SD card as the default write disk. 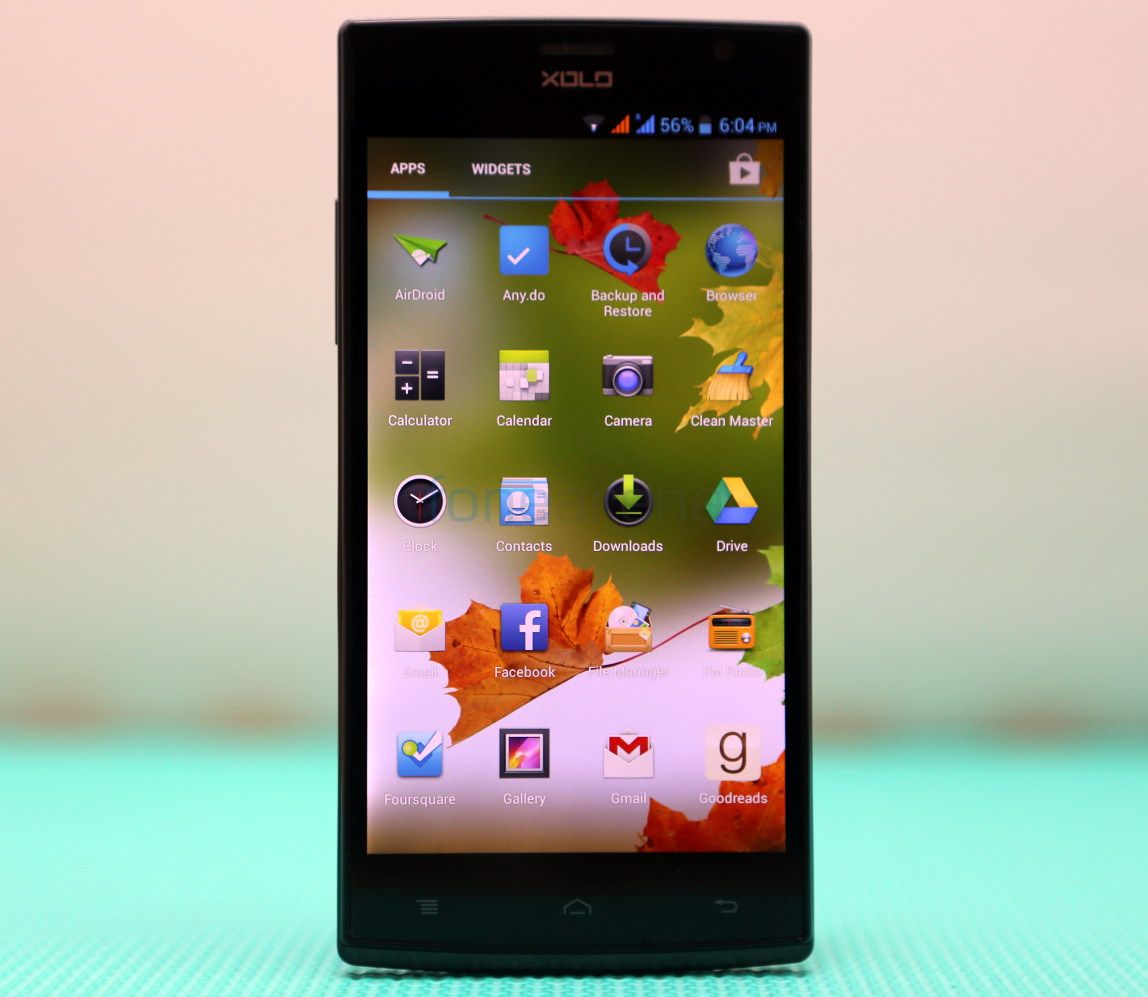 You get the default set of Google apps and a range of utility apps including Backup and Restore (to back up apps and personal data to and from the SD card), Calculator, Clock, File Manager, NoteBook, Email, Sound Recorder and ToDo . It also comes with Xolo Power and Xolo Secure apps developed by Xolo. In addition, this phone also comes with an app called PlayApp that shows app recommendation popups. 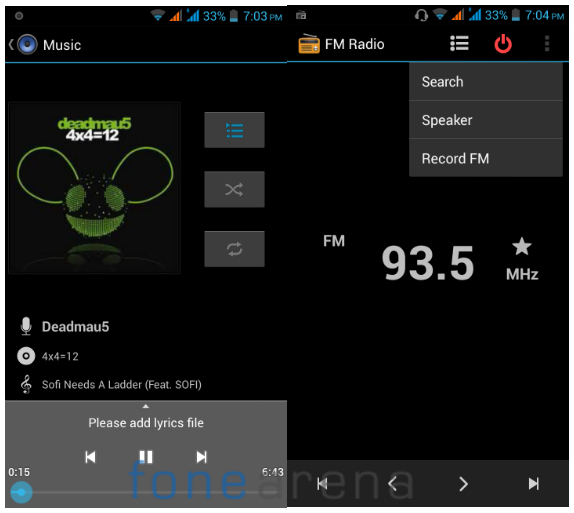 The music player is stock and lets you play several audio formats, including MP3, MIDI, WAV, 3GP, AAC and AMR. It supports equalizer, Bass boost and 3D effect features. The phone has FM Radio with auto search and recording. Audio from the the loudspeaker is quite loud, but audio gets suppressed when you place it on a flat surface. Bundled in-ear earphones sounds good. 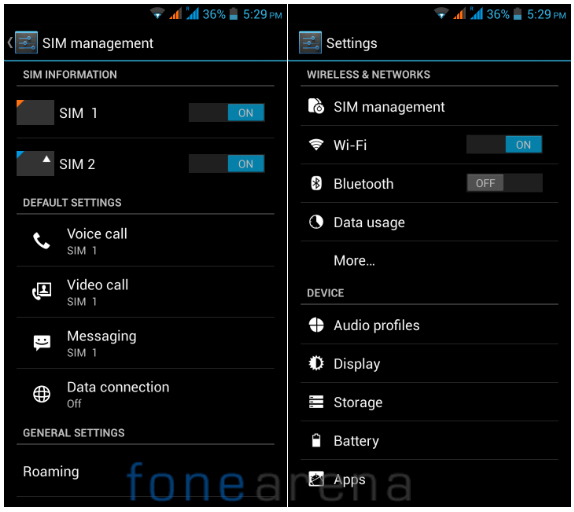 The phone has dual SIM support with similar functionalities as the other Xolo phones. Even though both the SIM cards support 3G, you can enable 3G on only one SIM card at a time. The connectivity features include, 3G (HSDPA: 42.2 Mbps, HSUPA: 11.5Mbps), Wi-Fi 802.11 b/g/n, Bluetooth v 4.0 with A2DP and GPS, similar to the Q1000S. It has support for wireless display, which is commonly seen on devices running on Android 4.2 (Jelly Bean). It does come with USB OTG support. You also get a free USB OTG cable in the box, which is a great addition.

Even though this one is powered by the quad-core MediaTek 6589 processor clocked at 1.2 GHz with a 357 MHz PowerVR SGX 544MP GPU, unlike the Q1000S with a MT6589T. Performance is quite good. We did not find any lags while multitasking, but it did lag while playing some high-end games. We already brought you the benchmarks of the smartphone. Check out some synthetic benchmark scores.

The Q2000 clocks over 4000 points in the Quadrant benchmark. 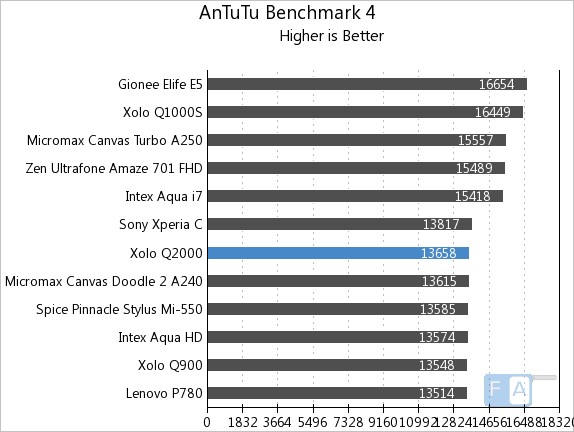 In the AnTuTu Benchmark 4, the phone scored 13658 points, almost similar to the Doodle 2. 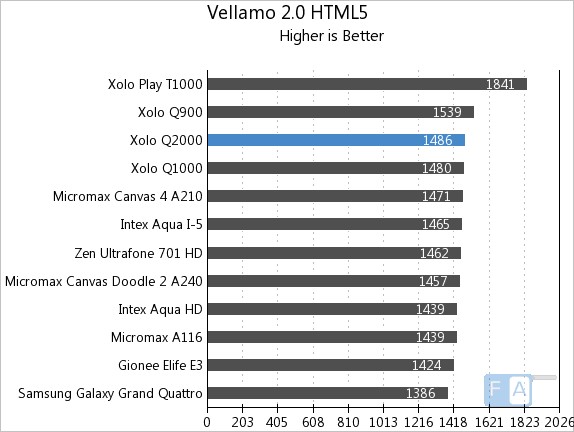 The phone clocked 1486 points in the Vellamo 2 HTML 5 browser benchmark. Check out the complete set of Xolo Q2000 Benchmarks here.

We also tested some games such as Shadow Gun, Riptide GP2, Asphalt 7, Subway Surfers and Dead Trigger 2. Check out the Riptide GP2 gameplay.

As you can see from the gameplay video, the graphics was good, but it suffered from occasional frame drops. Smaller games like Subway Surfers were smooth with nice graphics, but high-end games such as Dead Trigger 2 and Shadow Gun did lack some details and suffered from occasional frame drops. The phone also supports PS3 controller via USB OTG. Check out the gaming review to get a clear idea about the gaming performance of the Xolo Q2000. 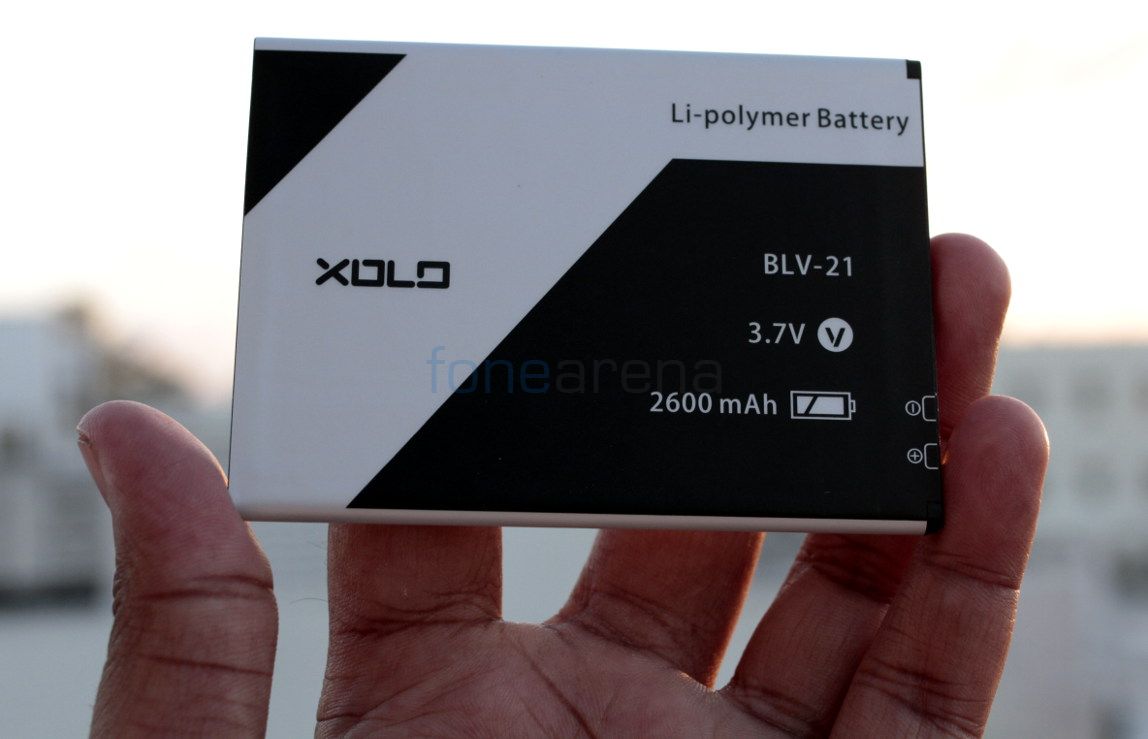 The 2600 mAh lithium-polymer battery lasts for 24 hours with mixed use, including couple of hours of video playback, few hours of music, few calls and some gaming. Even though the phone has a large screen, the large battery doesn’t drain quickly, even after watching video. 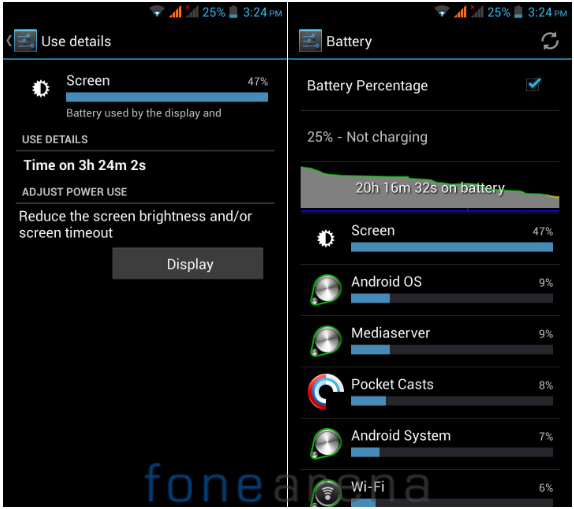 Based on my average use with about 3 and half hours of screen time, battery dropped to 25% after 20 hours of usage. If you are a heavy user, it should last for the whole day, even with both the SIM cards. You can also use the Xolo Power app to improve the battery life.

At a market price of Rs. 13,499, the Xolo Q2000 is definitely one of the best large-screen phones in the Indian market. Even though the build quality is not impressive, it is pretty good for the price and the memory card slot is a big plus. The glossy screen is a bit disappointing since it is not comfortable to use in bright outdoor environment. If you are looking for a large-screen device that is not too big as a tablet, go for it.