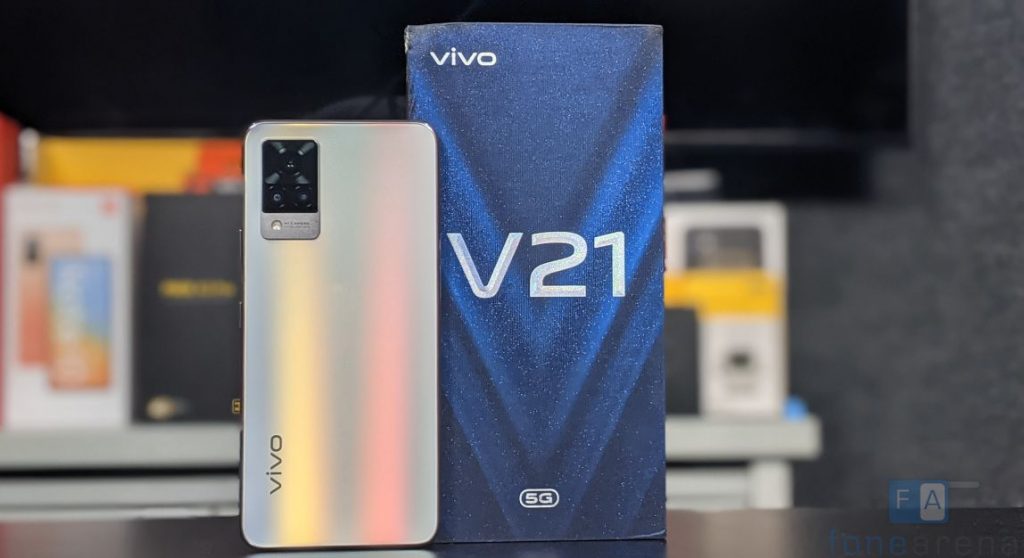 vivo launched the V21 5G smartphone, a couple of months back, in the highly competitive market. On the papers, the V21 5G looks neat and packed with the latest specifications, but how does it hold up in reality? Let’s check out. At Rs. 29,990, the V21 competes directly against the OnePlus Nord, Realme X7 Max, Mi 11X, Realme X7 Pro 5G, and others. 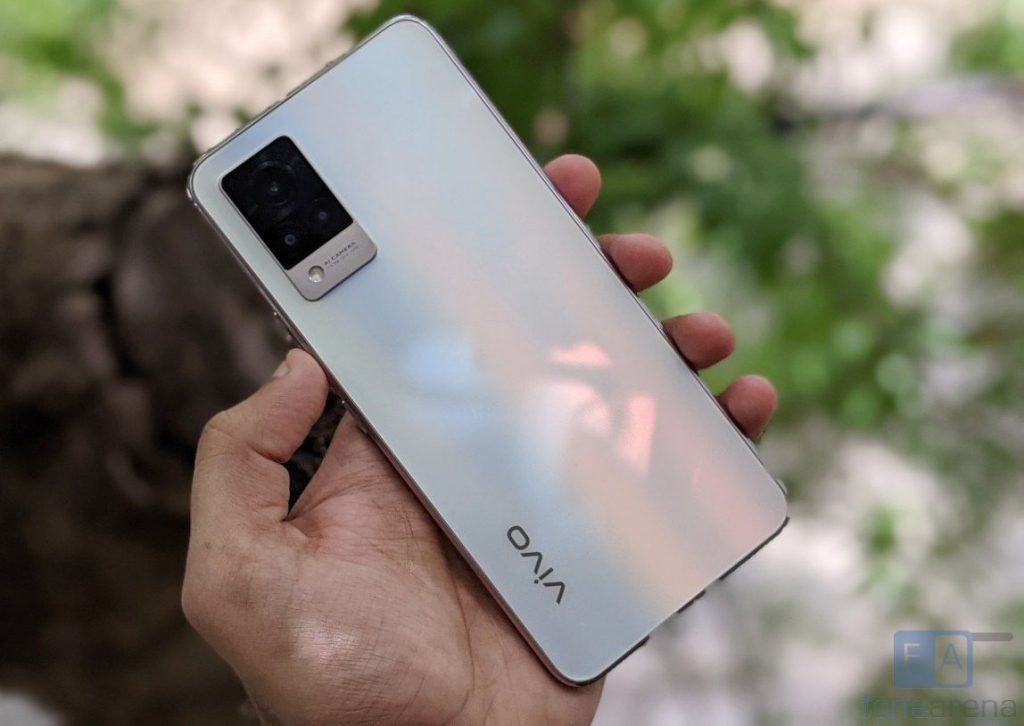 The design of the V21 is easily one of the best features of the phone. Vivo has produced some very beautifully designed smartphones, and the V21 is one of them. The phone is a glass sandwich surrounded by metal railings that feels wonderful to hold. Our model’s colour is Arctic White, and the rear glass has a neat matte finish over a gorgeous mesh of colours that constantly changes in different lighting.

On the right side, there is the volume rocker and a ridged power button, and the left edge is empty. The bottom edge has the SIM card slot, a USB Type-C port, a microphone, and a speaker grille, and the top edge has another microphone.

Turning back, we have a rear camera module that houses the triple camera. The design is quite similar to V20 Pro with two levels – one for the lenses and one for the rear dual flash. 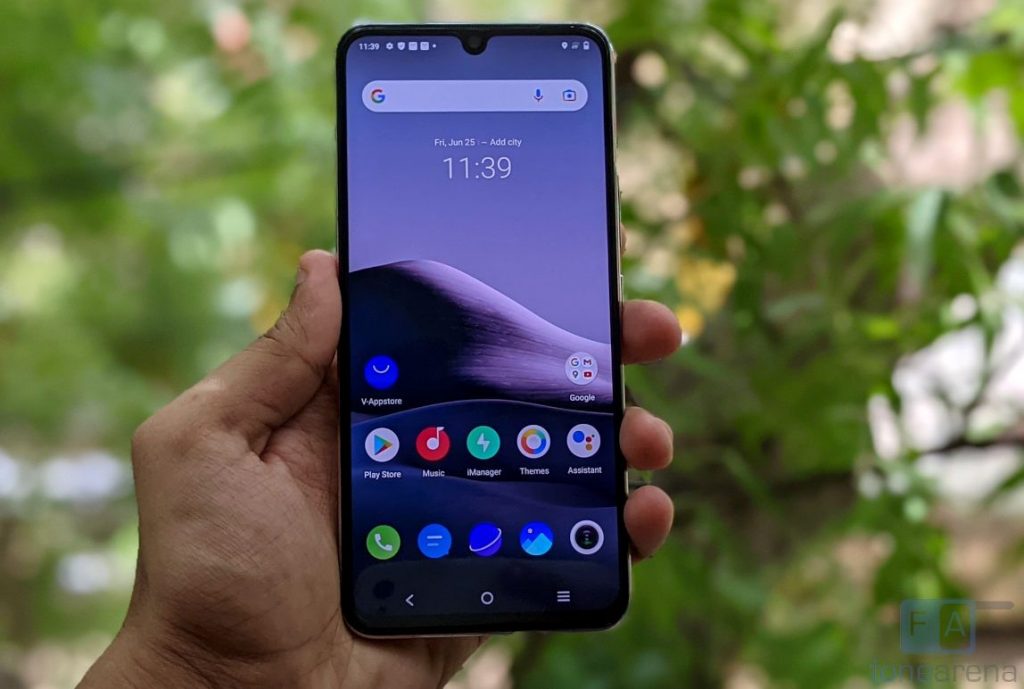 Next to design, the display is yet another strong point for the V21. It is a 6.44-inch touch AMOLED panel with a resolution of 2400×1080 pixels. Colours are vivid with good contrast, blacks are deep, and sunlight visibility is not an issue at all. The pixel density comes to approximately around 409ppi, which is a good number for media consumption. The device is HDR10+ certified, which means HDR content on Netflix, YouTube, and Amazon Prime will playback at that quality.

Unlike its predecessor, the V21 5G comes with a 90hz refresh rate. At 90Hz, the V21 feels smoother and faster, while scrolling through social media feeds and paging through home screen felts snappier. There are options either to choose 60Hz or 90Hz. Further, the screen color can be calibrated based on the mode — Standard (default), Professional and Bright, and color temperature. 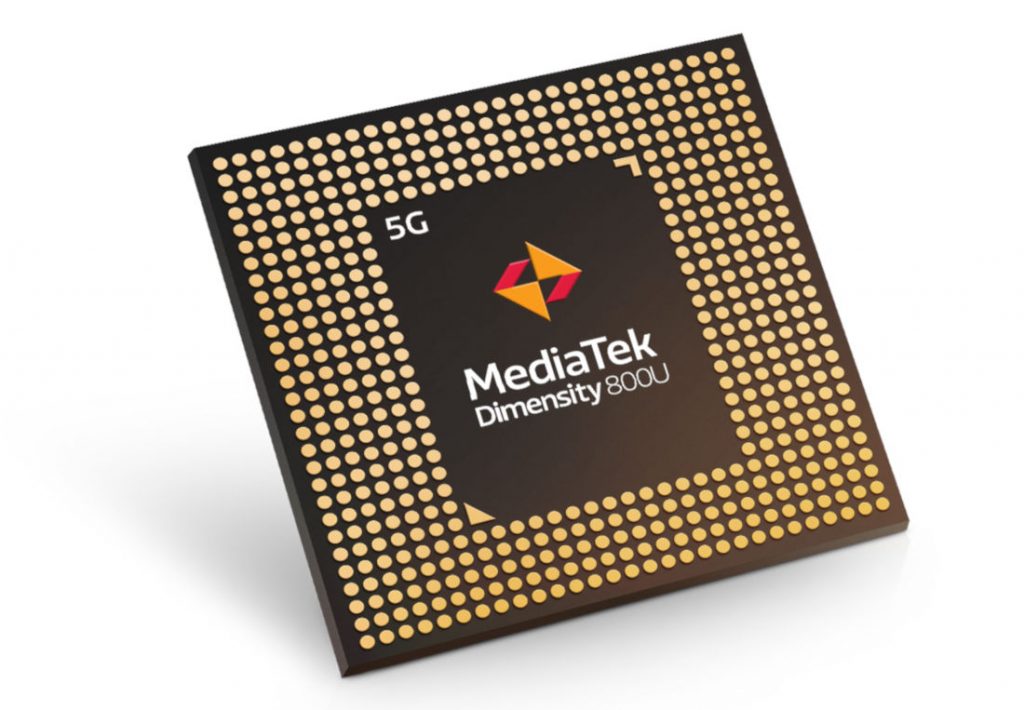 The vivo V21 5G is powered by Octa-Core (4 x 2.4GHz Cortex-A76 + 4 x 2GHz Cortex-A55 CPUs) MediaTek Dimensity 800U (MT6873V) 7nm processor. The smartphone is great for day-to-day use. Navigating the system was smooth and animations throughout the UI had no hitches. Apps open more or less quickly and thankfully do not heat up too much during extended sessions, which is a good sign.

We also tried playing games with V21. For most of the games, the V21 5G has no problems at all, however, for heavy games, you can notice drops in frame rates now and then at high graphic settings. 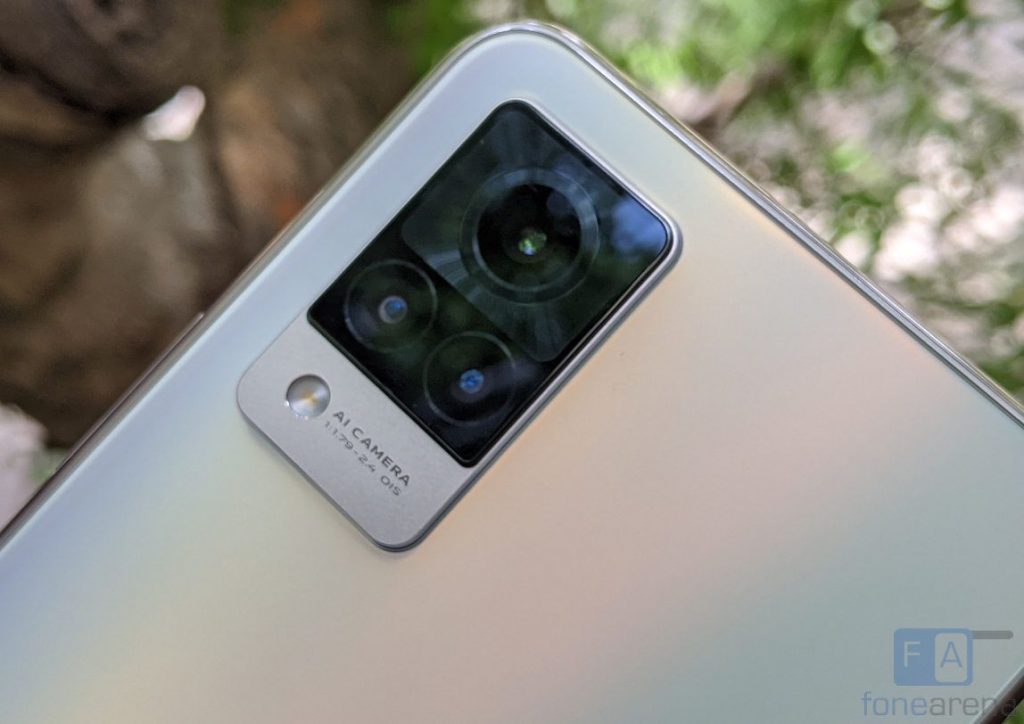 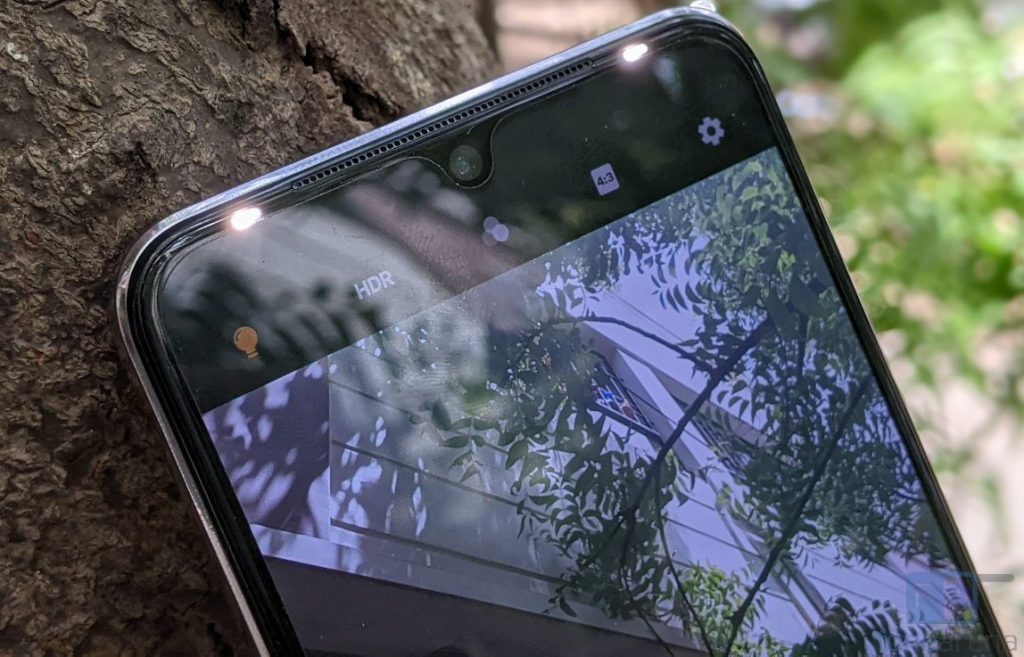 The primary sensor shoots out 16MP photos by default, and there is a mode to shoot at the full 64MP resolution. In good lighting conditions, the V20 Pro shoots some pretty good photos. They are vivid, sharp with good contrast, and the colours and white balance are mostly accurate. The camera outputs some really impressive HDR shots too.

Even in the low light condition, the camera manages to get an impressive amount of dynamic range and capture a good amount of detail. Portraits come out very well with nice clean borders for the bokeh effect. The 8MP ultra-wide camera does a good job as well. It also acts as a macro lens. The outputs are far better than the dedicated 2MP or 5MP macro lens in other phones. The cameras also support taking RAW photos.

The primary 44MP front camera shoots some of the best selfies. Faces have a lot of detail, and they aren’t overly smoothened. Since the front camera comes with a dual-LED flash, which the company calls Spotlight, even the low-light selfies come out good. On the video front, the V21 can shoot videos at up to 4K 60fps from both lenses, and it is loaded with some helpful features such as eye-tracking autofocus and Ultra-stable. 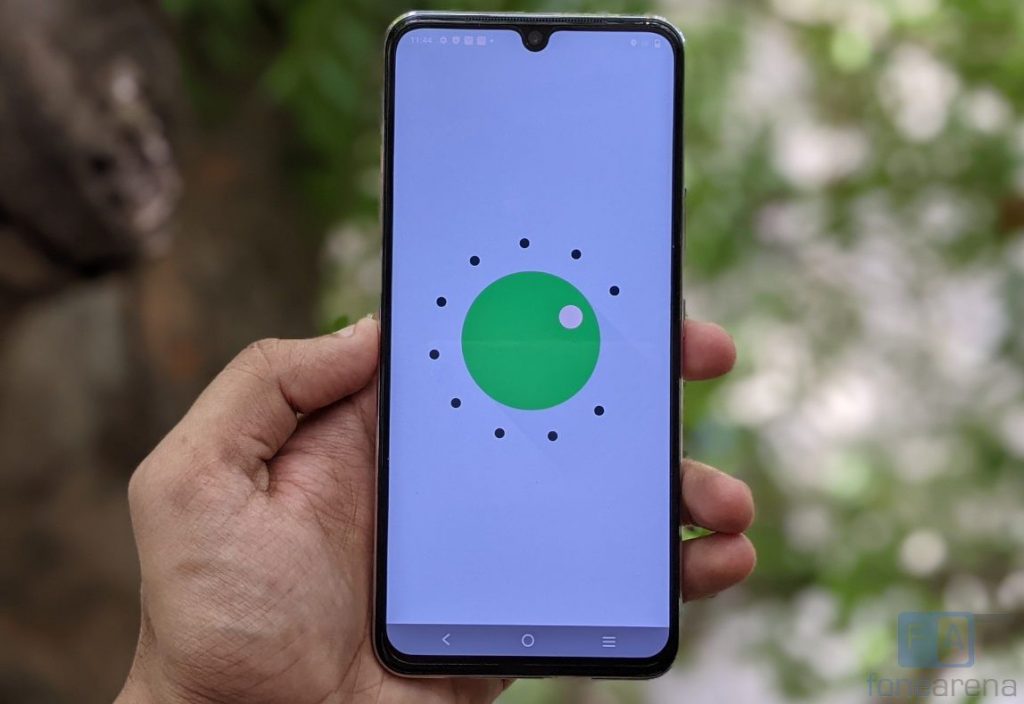 vivo v21 is shipped with Android 11 with Funtouch OS 11.1 out of the box. As expected, the Funtouch OS 11.1 offers loads of customisation options right from the ability to change the system’s icons and colour scheme, Android 11 gestures, to a lot of animation effects choices for various aspects of the system.

There is an Always-On display, which comes with customization options such as changing the clock design, colour, layout, and more. You can even set a sort of live wallpaper based on the position of the sun.

For serious gamers, the FunTouch OS 11 has Ultra Game Mode, which when contains loads of settings that can improve the gaming experience. Notifications and incoming calls can be muted, the SoC can be set to the max performance and accidental touches can be prevented.

The phone did come with quite a few pre-installed apps, such as Daily Hunt, YT Music, Snapchat, Moj, etc. Notably, they can be uninstalled easily, so not too bad. Besides Google’s Play Store, you also get V-Appstore and GameCentre.

The phone does feature dual SIM connectivity with support for Dual standby. The v21 features 5G since it features a MediaTek Dimensity 800U chipset which has a 5G modem built-in. There was no call drop issues with no abnormal signal strength issues either, and the sound from the earpiece was comfortably loud. Other connectivity options include Bluetooth 5.1, Dual-Band Wi-Fi 5, GPS, NFC, and USB-OTG.

vivo V21 comes with a 4000mAh (typical) battery with 33W fast charging. I was able to comfortably get through a full day with medium to heavy usage. The phone can go from 0-100% in about 55 minutes, which is always a great feature to have when you need a quick charge.

At Rs. 29,990, the V21 5G is one of the worthy contenders, which offers good specs and performance in a beautiful body. The phone has a very good display, scores well in performance, and an amazing camera. The phone has a strong battery life, and it can charge within an hour.