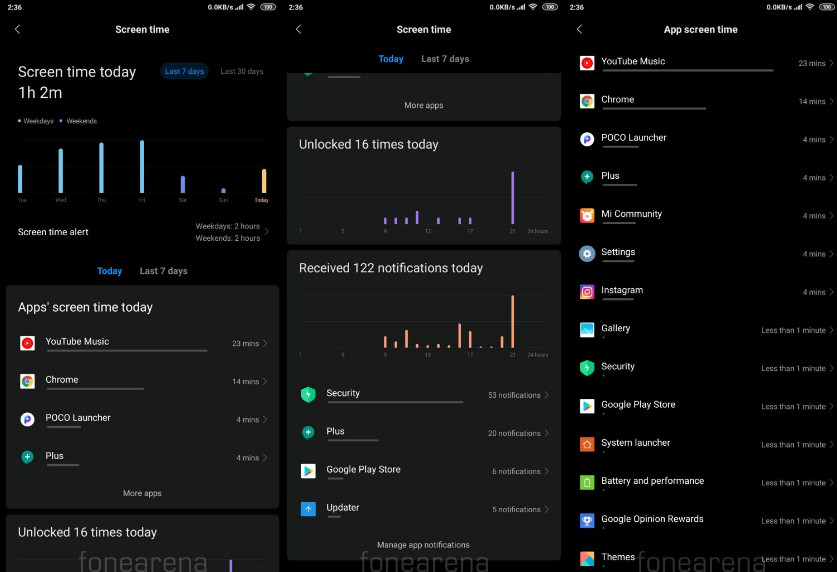 Google announced Digital Wellbeing feature with Android Pie aimed at being responsible with smartphone usage. Digital Wellbeing helps you understand your phone usage better, app usage timers so that you can limit the usage, visuals detailing how many times you unlock your phone per day and how many notifications you receive. The Wind Down feature limits notifications and also gradually turns the display greyscale, to make it easier on the eyes and to encourage you to unplug. Various OEMs like Samsung and Huawei had introduced their own versions of it called Digital Wellbeing and Digital Balance respectively.

Xiaomi’s MIUI gets updated biweekly, including closed beta on every Tuesday and public beta on every Friday. This week, Xiaomi has introduced Screen Time their own version of digital wellbeing.

The option can be found under the Settings app, users can set screen time alert. Different alerts can be set for weekdays and weekends but it results in permanent notification in the notification panel which felt a little annoying.

User can see Screen Time, the number of time device was unlocked and the number of notification received on the device for the day in the form of bar graphs.

Users can also see Screen Time, the number of time device was unlocked and the number of notification received on the device for the entire week in the form of bar graphs.