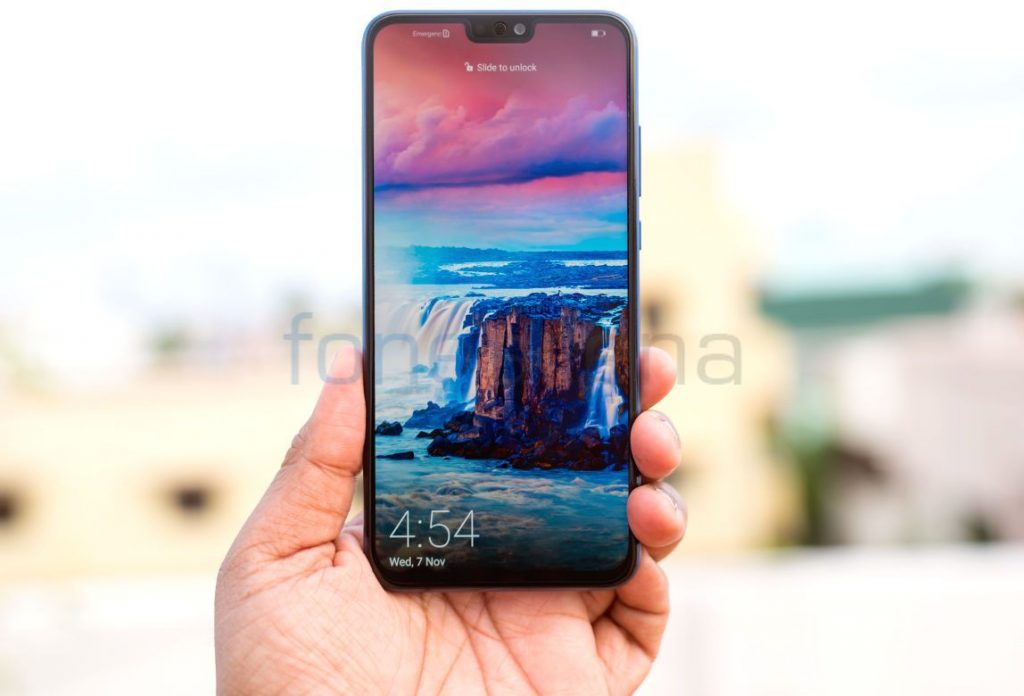 Huawei’s Honor brand launched the  Honor 8X, a mid-range smartphone and the successor of the Honor 7X in India last month. It has a similar notch design as the P20 Lite, but this has minimal bezels. It has a 16-megapixel front camera, is powered Kirin 710 Octa-Core 12nm SoC with support for GPU Turbo feature and AI features. On-paper specifications look good for the price of Rs. 14,999, but how good is the phone? Let us dive into the review to find out. 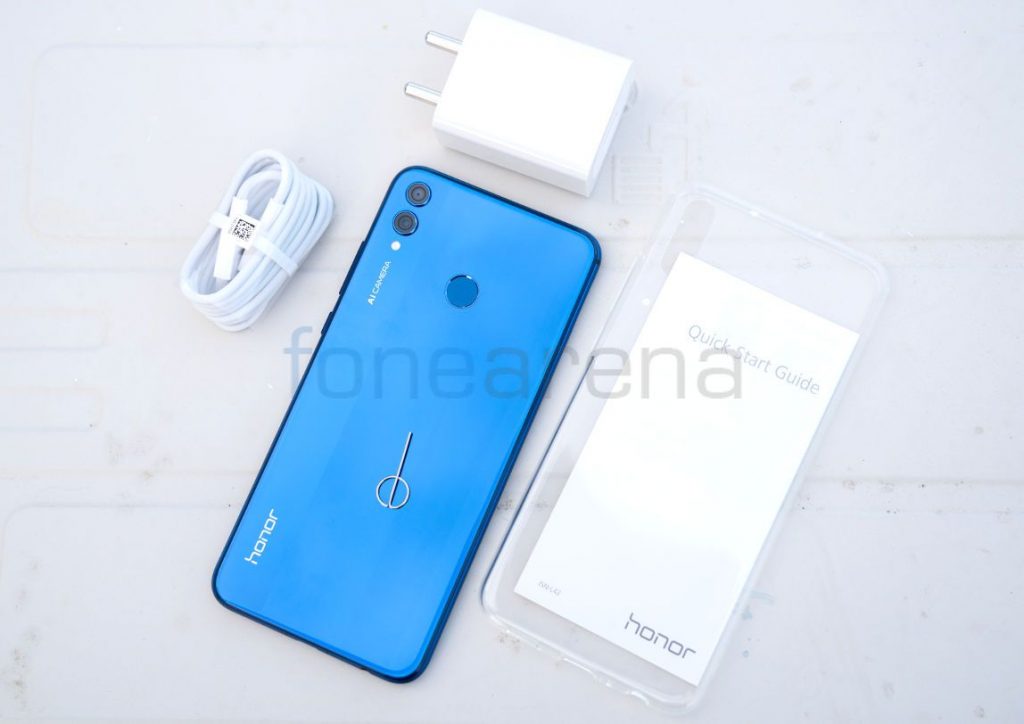 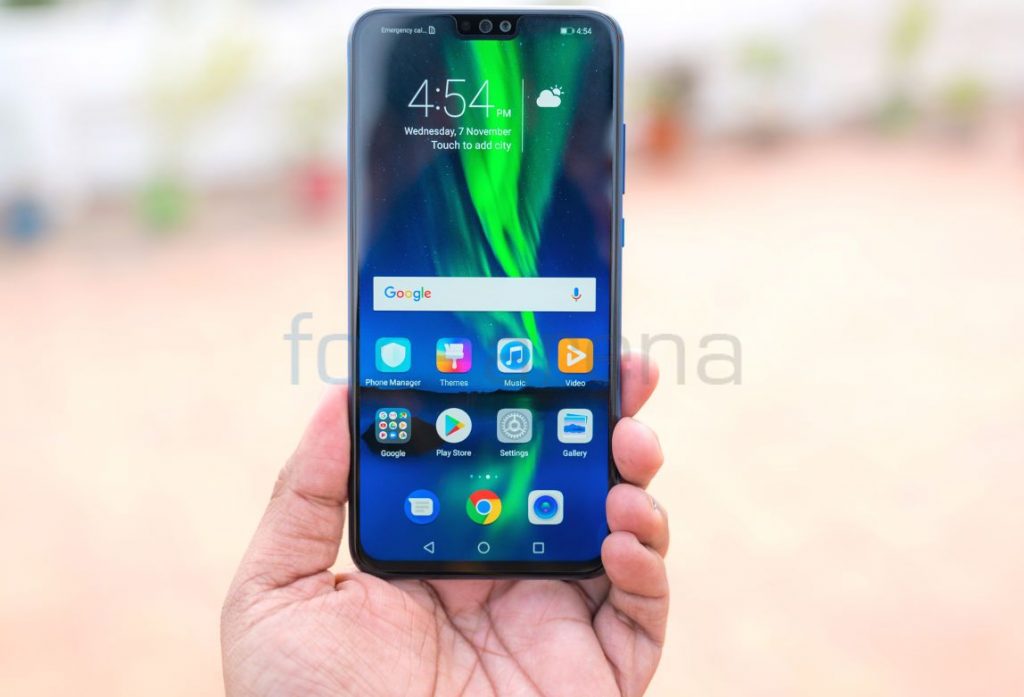 The Honor 8X comes with a 6.5-inch Full HD+ LCD 2.5D curved glass display with a resolution of 1080 x 2340 pixels, pixel density of 396 PPI, 19:5:9 aspect ratio with a notch and a screen-to-body ratio of about 91%. The display is bright, offers good color reproduction, thanks to 85% NTSC color gamut, has good viewing angles and the sunlight legibility is good as well. The company says that it uses Chip on film (COF) technology for low power consumption, small structure, light weight and high resolution.

Like the other phones with a notch, this has an option to hide the notch at the top of the display that darkens the surrounding areas. Since this has a 19:5:9 aspect ratio screen, you can pinch to zoom to fill the screen when you use apps like YouTube, but the content gets cropped. You can also select apps to enable full screen display, but it might not work for all apps. 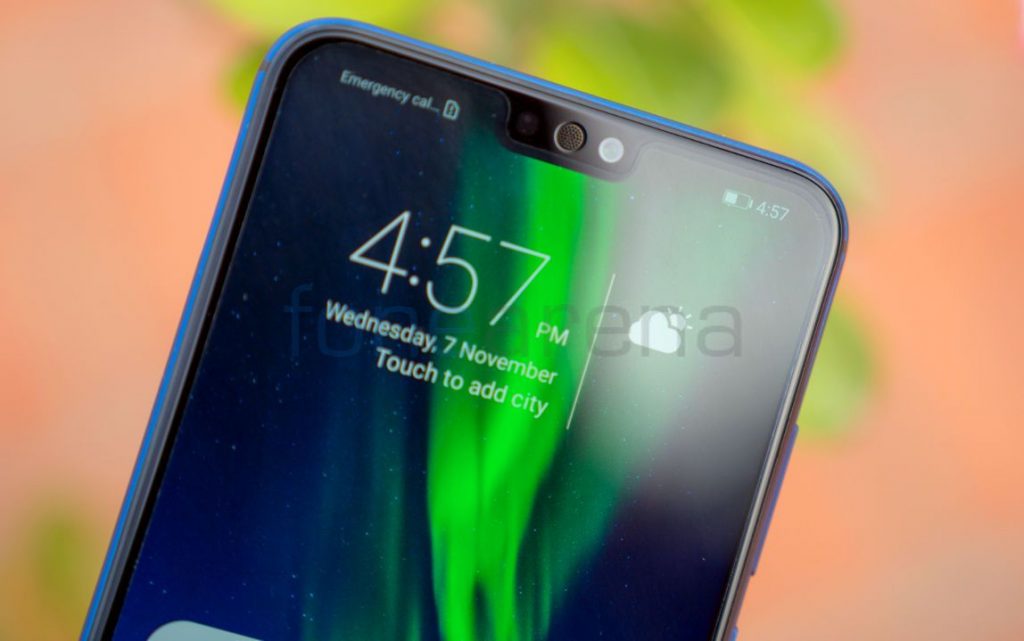 On the top, inside the tiny notch, there is an earpiece, notification LED, 16-megapixel camera and the usual set of proximity and ambient light sensors. It has gyroscope and magnetic sensor otherwise known as magnetometer for VR headsets. 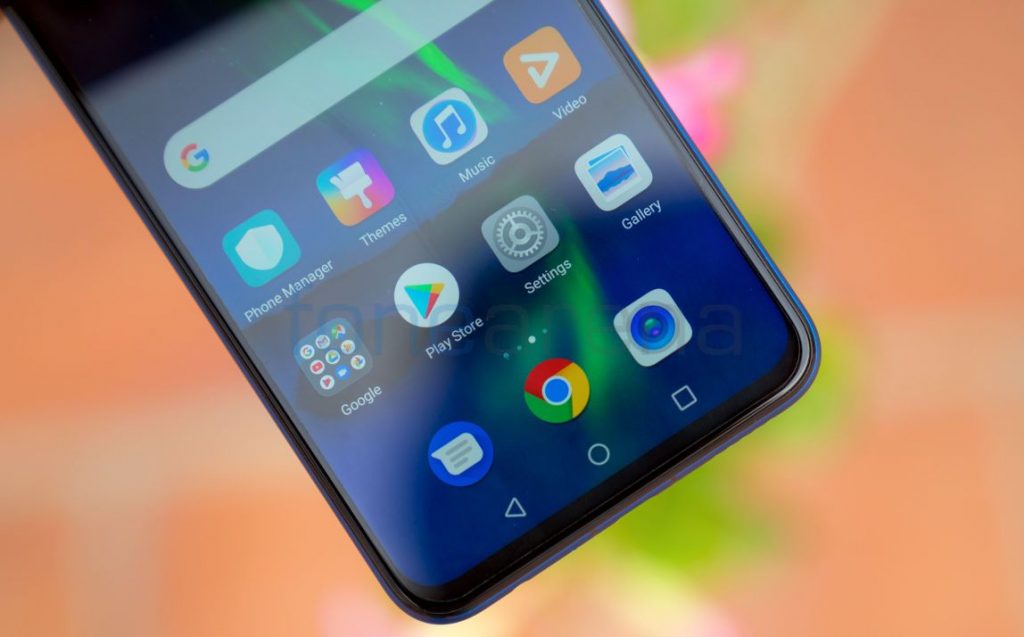 Even though the phone uses on-screen navigation, it has a tiny bezel below the screen, but it is smaller than the Nova 3i at just 4.25mm and doesn’t have any branding.

Coming to hardware buttons and the ports, the phone has a volume rocker and the power button on the right side, dedicated dual SIM slots on the left, secondary microphone on the top, and the 3.5mm audio jack, Micro USB port, primary microphone and the loudspeaker grill on the bottom. It is a good thing that the company has provided dedicated slots for the phone since the microSD accepts cards up to 400GB. 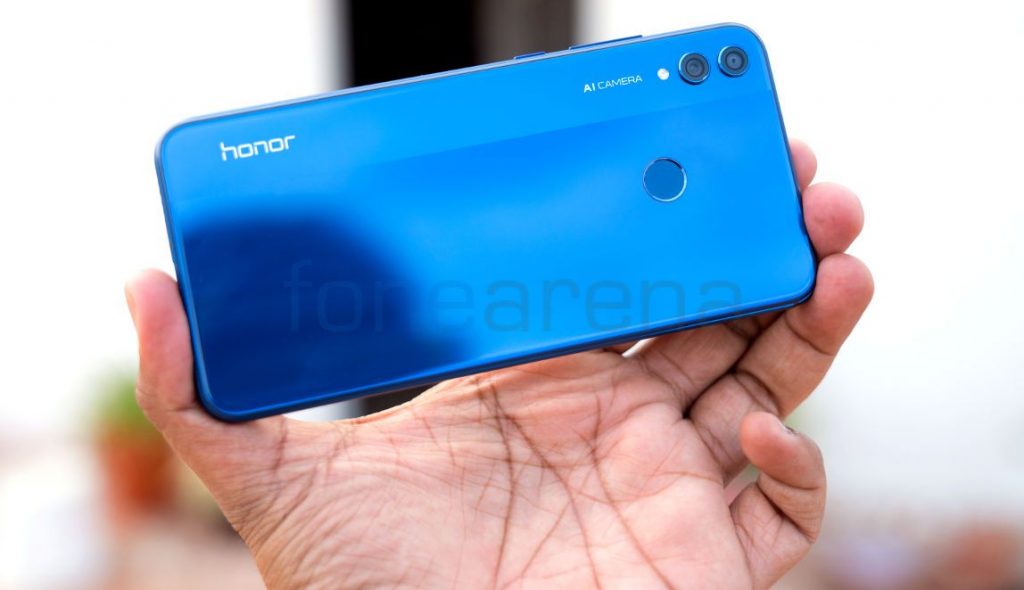 The glass back has visual grating effect. It uses second-generation anti-glare film, with two visual effects and 15 layers of rich reflective craftsmanship on the same glass back. On the left border there is a complex intertwined and grained texture, and the right border has classic, unique pattern effect of Honor flagship phones.

Under the back there is a 3750mAh battery. The phone has a metal frame, and the company says that it uses special antenna design. It measures 160.4×76.6×7.8mm and weighs 175 grams. Even though the phone is huge, it is good for single-handed usage. It is recommended to use the bundled clear cover to protect the back. Overall the build quality of the phone is good, and the phone has a premium design. 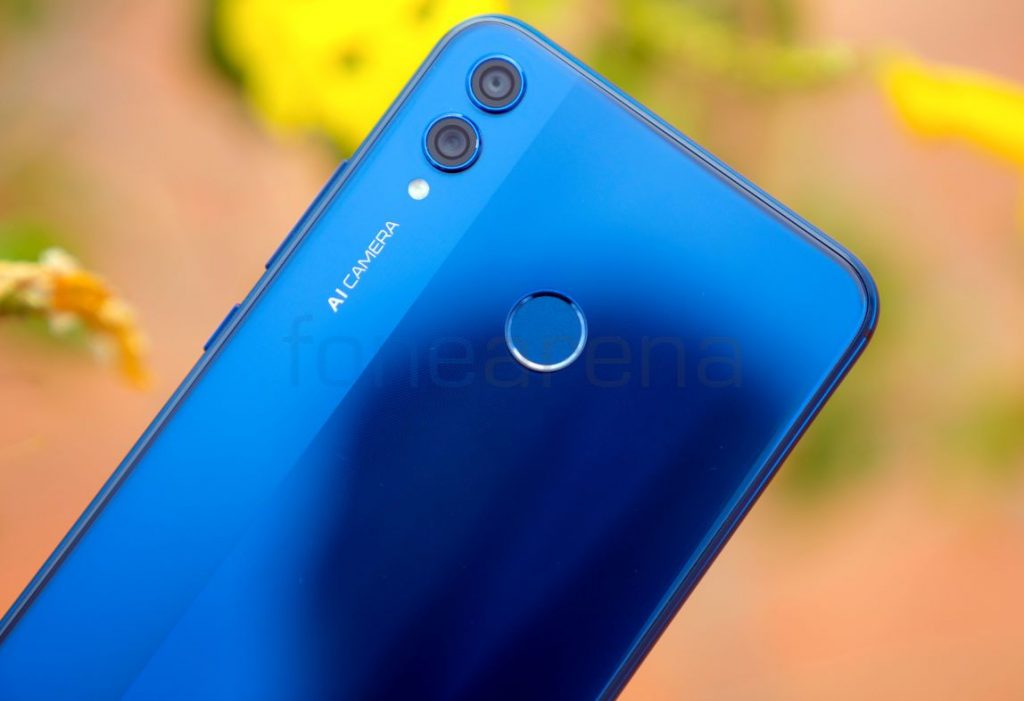 The Camera UI is similar to most other Honor phones. It has smart shopping feature that lets you just scan the object to identify that item on Amazon, toggle for flash, AI, moving picture mode on the top, while the bottom bar houses mini-gallery, shutter button, and video mode. I thas Pro mode, Slow-mo, Panorama, AR lens, Light Painting (Traffic trails, Light  graffiti, Star trails and Silky water), HDR, Time-lapse, Filters and Watermark.

Coming to the image quality, daylight images are good, macro shots are good as well and the HDR shots were better. Portrait shots are good with good amount of blur. Low-light shots have noise, but the night shot mode is better in capturing perfect image even in poor lighting since the phone has adjustable exposure of up to 32 seconds in the mode. The Night shot mode and requires a tripod since the phone needs to be steady or use tripod. The front camera is pretty good at capturing details. It has Backlight Portrait Selfies with AI along with multi-frame exposure to prevent over-exposure of backgrounds.

Check out the camera samples below (Click the image to view the full-resolution samples). 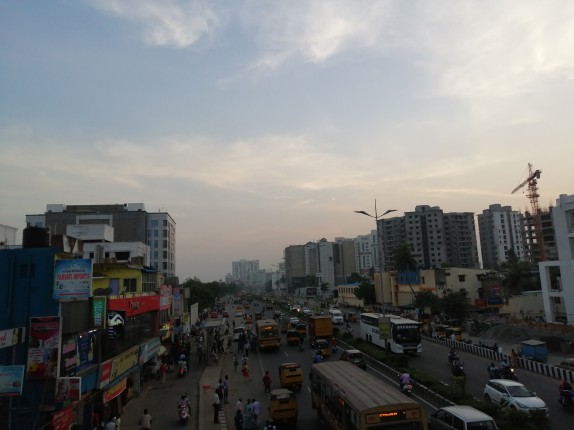 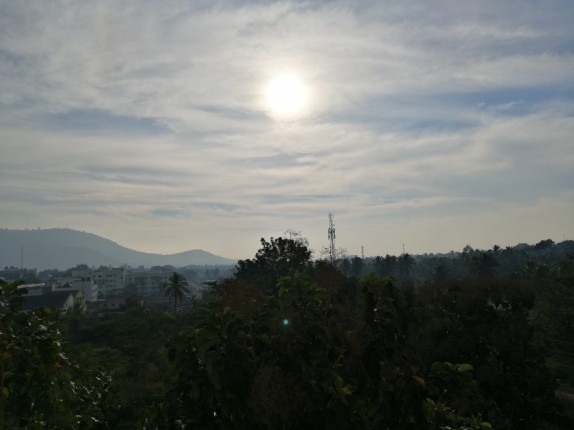 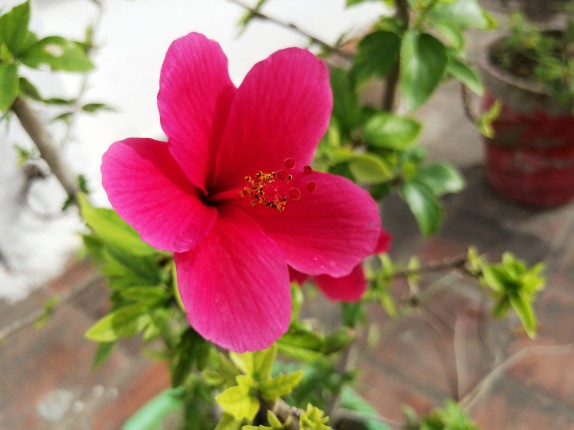 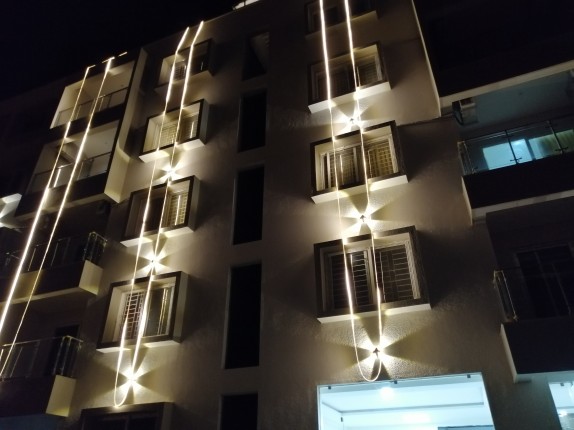 The phone can record 1080p videos at up to 60fps, but lacks 4k recording even though it ha a powerful SoC. Video quality is good, and the audio is crisp since it has a secondary microphone. There is also 16x Super Slow Motion mode offering 480 frames per second video recording at 720p for 10 seconds, but the quality is not up to mark. It also has Automatic Motion Detection, which allows users to capture any fleeting moment easily. You can set and motion-detection area on the camera screen that can be adjusted, similar to the Samsung Galaxy S9 and few other high-end phones. Check out the sample below.

The phone runs on Android 8.1 Oreo with Android security update for September 2018 and has Treble support. It  runs EMUI 8.2 out of the box. The UI gives users an option to choose the home screen style — Standard (shows all apps on the home screen) and Drawer (shows all app on drawer screen).

It has one-handed mode, scheduled power on and off option, Flip to mute, pickup to reduce ring and three-finger screenshot gestures. There is also ride mode. Once enabled, callers will be notified that the user is currently riding, and cannot answer calls. The feature essentially functions as a Do-Not-Disturb option that sends a message to the caller saying that the user will not be able to attend the call since they are riding. However, the caller will also get an option to call the rider in case of an emergency. App Twin feature that allows users to log-in and use two different accounts at the same time on the same phone.

This option is used to send automatic text messages containing your estimated journey time to selected contacts when they call you while you are on a bike ride. But this option must be enabled on your device if you want to use it while riding a bike. At max, you can add upto 4 contacts to whom you can send the message while you are on a ride.

Out of 64GB storage, you get 52GB free storage, out of 4GB RAM, 3.69GB is usable, out of which 1.8GB is free on boot, when default apps are running in the background.

Apart from the usual set of utility apps and Google apps, the phone comes with Facebook, Netflix, Facebook Messenger and some games preinstalled, however these can be uninstalled.

The phone comes equipped with a fingerprint scanner on the back, which is comfortable to unlock when you are holding the phone. It unlocks the phone quickly. In this phone, you can add up to 5 fingerprints. And then there is a Fingerprint recognition option, which helps users to find out which fingerprint belongs which ID. You can also take photos or video, answer call, stop alarm, bring down the notification panel and browse photos with it.

There is also has Face unlock the can unlock the phone quickly, but it requires a good amount of lighting to work, and is less secure compared to fingerprint. The direct unlock option automatically unlocks the phone when your face is recognised when the screen turns on. This is useful when you enable wake up the phone when you pick up.

It has a separate music player with support for Huawei Histen sound effects when you use headphones. Audio through third-party headset is good, and the loudspeaker is good as well. It also has FM Radio support.

It supports 4G VoLTE for Reliance Jio and Airtel as well as support Dual 4G VoLTE that offers 4G in both the SIM cards at a time. This is one of the few smartphones with the feature. Other connectivity options include Wi-Fi 802.11 ac (2.4GHz / 5GHz), Bluetooth 4.2 LE and GPS. It also has USB OTG support that lets you connect USB drives. Moving on, the call quality is good, and we did not face any call drops and earpiece volume was loud as well. 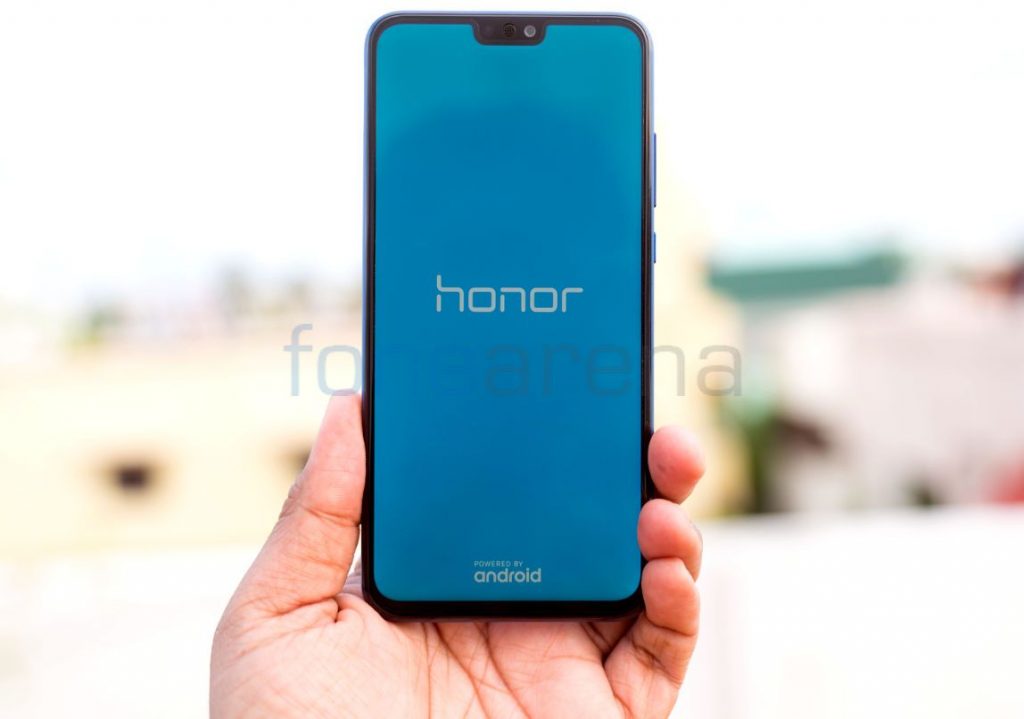 It is powered Huawei’s own Octa-Core Kirin 710 Octa-Core 12nm processor with Mali-G51 MP4 GPU and AI photo features under the hood. 4GB RAM compliments the hardware in making multi-tasking easier than ever. Talking about the real world experience, the performance is smooth and snappy as we experienced no lag or hang. It is good even for graphic-intensive games like PUBG, but the Qualcomm counterpart, Snapdragon 660 does a better job, even though the company promises better performance with the GPU Turbo technology. Check out the synthetic benchmark score below. 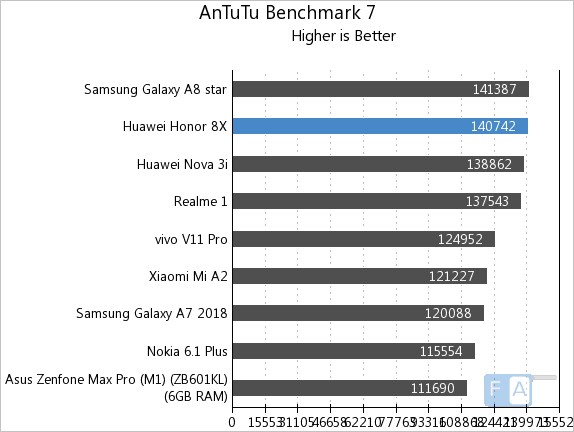 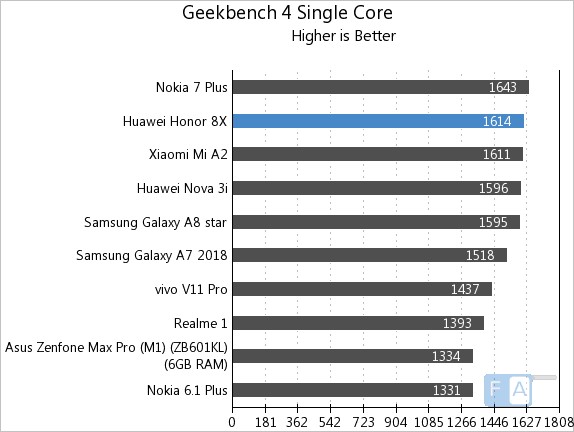 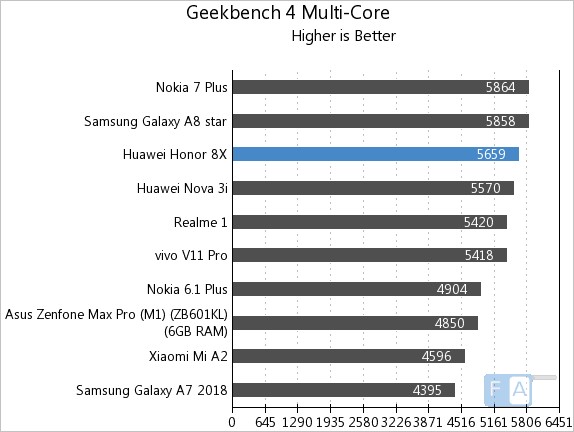 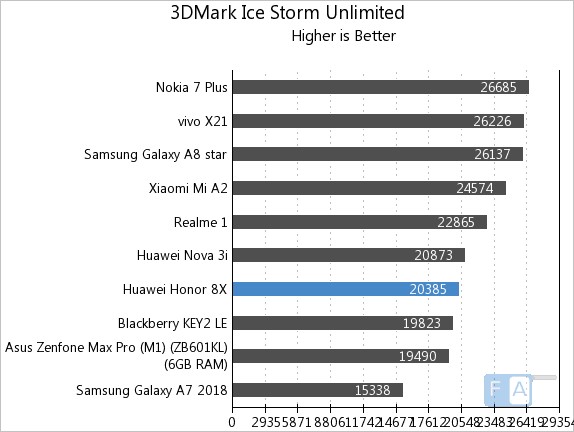 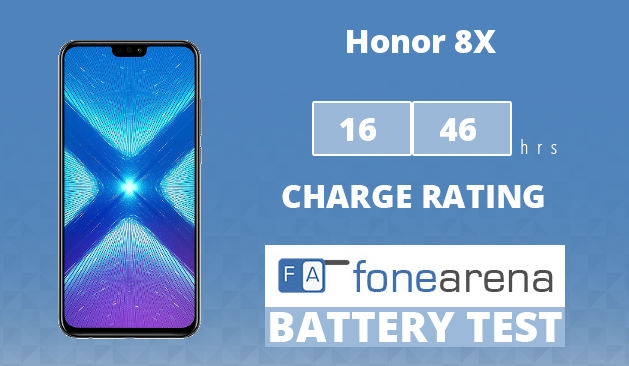 It is powered by 3750mAh (typical) / 3650mAh (minimum) battery under the hood, slightly bigger than the 3340mAh battery on the Nova 3i. It can last for the whole day even with heavy use, thanks to the optimization, and it should last more than a day with casual use. It also has power saving mode and ultra-power saving mode to increase the battery life. Sadly, the phone doesn’t have fast charging and uses micro USB.

In our One Charge rating, the Honor 8X scored 16 hours 46 minutes, which is good. Since doesn’t have support for fast charging it takes about 2 hours and 40 minutes to charge the phone from 0 to 100% with the bundled charger, and 0 to 50% took about 1 hour. We will bring you the complete set of battery life test results soon. 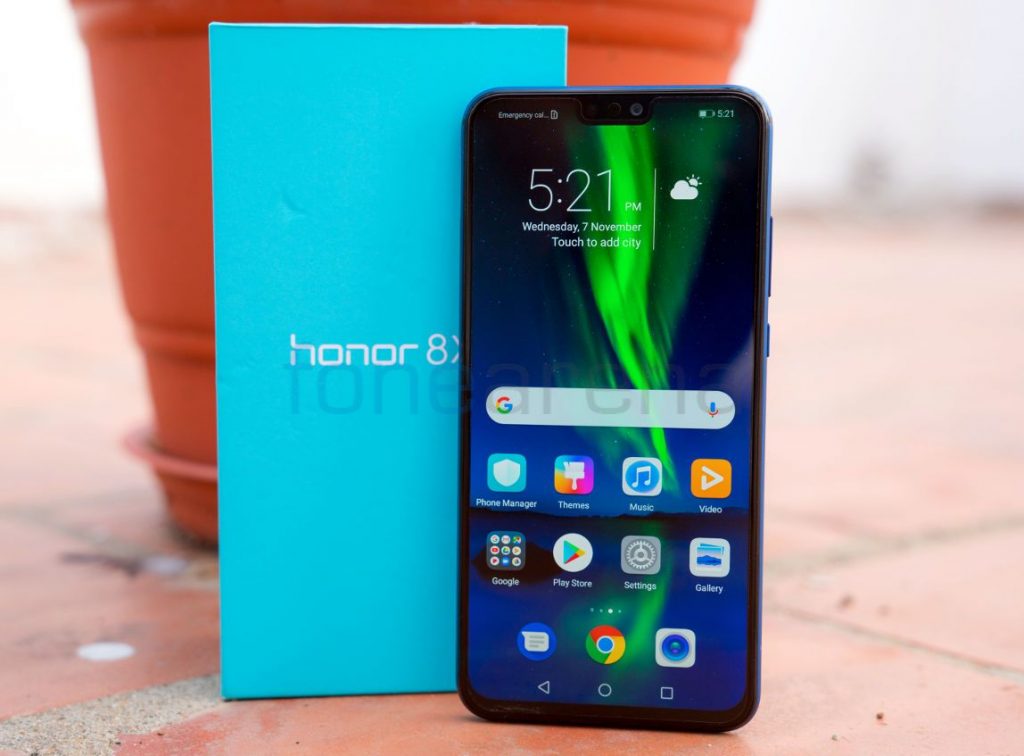 The Honor 8X is available  exclusively from Amazon.in. To summarize, here are the pros and cons of the smartphone.