At Nokia World today, Nokia announced the C6. Wait. Isn’t that already available and just right now getting into the hands of people? Yes. But you see, that was the old C6, or C6-00 if you want, with Symbian^1 and a slide-out QWERTY keyboard. The new C6, or the C6-01, is a Symbian^3 phone with no hardware keyboard. Confused?

Err, yes, so am I. For the record, I simply do NOT get this new naming convention. I thought they changed from their 4-digit 6230 kind of names to avoid confusion. Well, they reached new levels of confusion all-together with this!

Anyway, after the E7 vs N8 specs comparison table we brought you earlier, we thought it would be appropriate to show the differences between the two C6s and the other new Cseries device, the Nokia C7 (or C7-00 I think). Oh well. The full table is below with green highlights for the device that beats the others in some aspects.

You will note that there are some question marks and some (presumably) thrown in it, that is because some aspects of these devices weren’t fully disclosed in any press release or announcement post or specs sheet. Edit: the table has been edited with the verified information from the Forum Nokia device profiles for all 3 handsets. 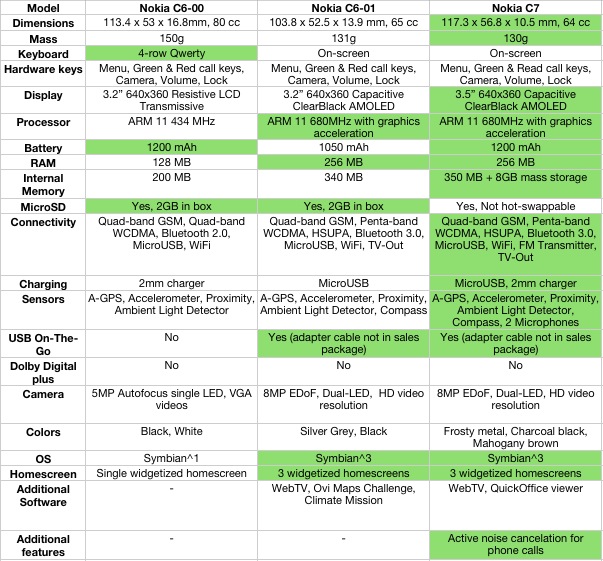 By simply glancing over that table, you’ll notice that it’s almost a home run for the Nokia C7 (or was it C7-00?! no, i’m not letting that joke grow old, what were they thinking really?). It’s thinner than both, lighter, has a larger display with ClearBlack technology, a larger battery than the C6-01, an FM transmitter, 2mm and microUSB charging, support for USB on-the-go, an Autofocus camera, and active noise cancellation technology for phone calls.

By comparison, the C6-01 seems more like the downgraded version of the C7/C7-00, whereas the C6-00 still has a few specifics of its own, like the full QWERTY keyboard. If you look closely, you will notice that the C6-00 and C6-01 almost have nothing in common. They’re different designs, with different cameras, different software, different processors, different screen technologies. Aside from the fact that they’re both mid-range for Nokia, there’s really not much similarities. And to have the same name, well that’s weird and totally confusing to say the least.

What’s your opinion of this trio of handsets? Does the qwerty of the C6-00 sway you over despite it carrying Symbian^1 on board, or are you more interested in the features of Symbian^3 with the C6-01 and C7/C7-00? Also, what do you think of this puzzling new naming strategy from Nokia? I’ve read that many will start calling them C600 and C601, but is that really a better option?