Announced just today during Nokia World, the Nokia E7 is being presented and perceived by many people and bloggers as essentially a Nokia N8 with a Qwerty minus the awesome 12MP camera. And to some degree it is, but to some other degree it isn’t. See, Nokia always likes to complicate things, so we had to go spend more than an hour digging around Press Releases, Images, Spec Sheets to pinpoint every single difference between these two new Symbian^3 beasts. 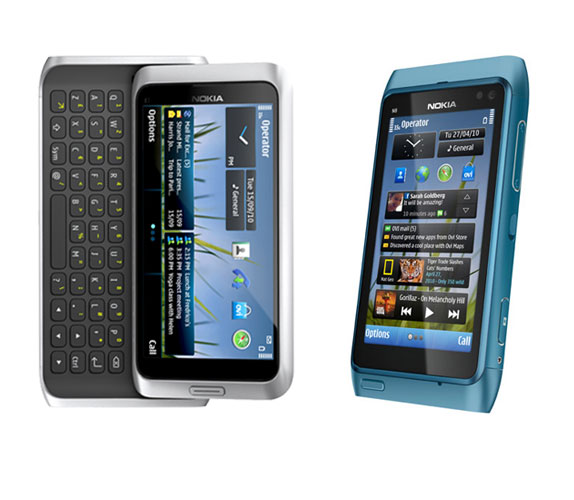 Below you’ll find this full table comparison, highlighting in green the areas where one of the two beats the other. 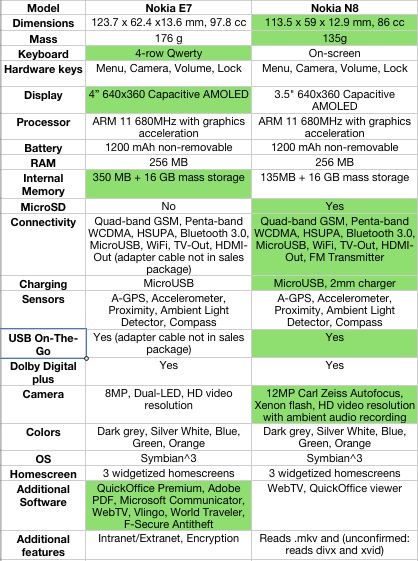 As you’ll notice, the E7 is in fact very similar to the N8, both are Symbian^3 devices (which comes with the new homescreen, social features, new Nokia Messaging, Ovi Store and Ovi Maps, threaded SMS view, image and video editing), both have the same processors, amount of RAM, sensors on board, with Digital Dolby plus support, and come in the same colors. But the similarities stop there.

The E7 has a larger 4″screen with ClearBlack Display technology on top of the AMOLED, more internal memory, as well as a lot of cool enterprise software bundled in, like QuickOffice Premium, Microsoft Communicator and others. On the other hand, while the E7 comes with HDMI-Out and USB on-the-go, it does not come with the 2 adapter cables in the box that are featured with the N8. It also lacks an FM Transmitter, a MicroSD slot, the ability to be charged via the 2mm charger. It is larger and heavier than the N8, and on the camera front, it replaces the 12MP Carl Zeiss sensor with a non-branded 8MP sensor, with no autofocus, no xenon flash, and no ambient audio recording.

What do you think of these two devices? Does your heart sway the N8 or the E7 way? Are you willing to compromise on some of the features of the N8, the most important one being the amazing camera capabilities, to get a full 4-row hardware QWERTY on the E7? Let us know in the comments below.