The N900 is the first phone from Nokia based on the Maemo Platform.  Nokia has expressed their intentions to use Maemo in high-end phones.  The Nokia N900 is a Touchscreen, full  QWERTY slider phone and one of most talked about members of the N-Series recently. Does the first phone built on the top of this relatively new phone platform live up to it’s expectations ? Find out in our N900 review.

The phone boasts of some pretty impressive specs including powerful ARM Cortex-A8 600MHz Processor with 256 MB of RAM and a 3.5 inch 800×480 pixel resistive touchscreen display.

Maemo has been around since 2005

Maemo has been around since 2005 in the name of the Internet Tablet OS. The Nokia 770 pictured below was one of the first internet tablets from Nokia. Sadly, the internet tablets 700, N800,N810 never went mainstream and was sold only in limited countries. It was popular amongst the linux and hacker community but not amongst consumers.Some of the main drawbacks about these devices was that they were generally slow and lacked GSM / phone capabilities.

The N900 is the first linux-based Phone from Nokia. The operating system on the Nokia N900 is Maemo 5 (Fremantle).  Maemo is based on the popular Debian linux distribution.  The N900 can be seen as an internet tablet with phone capabilities.

The phone comes in a black package with an image of the phone embossed on the top. This is pretty similar to the N97/ N97 Mini’s Box In addition to the above we also got a converter plug for old nokia chargers . There’s no memory card / extra stylus / carry case in the retail package.

This is a touchscreen phone with a slide-out QWERTY keypad and it’s certainly big when you compare the N900 to other devices such as Nokia E72 or the iPhone . But We’ve had no issues holding the phone. It felt comfortable to grip. We have no complaints about the placement of controls on the phone except for the weird placement of the hardware-unlock key on the right. Its not the most pocketable phone out there  but it still fits in your pocket. In the front the screen is surrounded by a glossy bezel which bears the letters nokia on the left and n900 on the right. There are no physical buttons in the front, not even call and hangup keys.

You will also find a notification light which can toggle between white , blue and yellow.The is a speaker on either side of the phone which justifies the entertainment capability of the device.

On the left you would find the microUSB port which is used for both charging and PC connectivity .

On the right is the hardware unlock key , 3.5 mm audio jack which also serves as a TV-out.

The stylus finds a place at the bottom.

On the top sits the volume rocker keys , power button and the camera key.

On the rear sits the 5 Megapixel Camera surrounded by a kick stand. The camera shutter encloses the lens and the dual LED flash.

The microSD card slot is beneath the real panel which houses the battery and SIM card.

The phone is designed to be used mainly in landscape mode and widescreen display is a proof of that. The 800×480 display is crisp and colors are reproduced quite well. Although the phone uses a resistive touchscreen, it’s very responsive and finger friendly.

The keyboard is made up of 3 rows  and  the keys provide good feedback. But since the long press for numbers was not there at the time of this review ,  it’s bit hard to use. But the keyboard is powerful as there are tons of a keyboard shortcuts available out of the box

Although the build quality of the phone is good , the plastic material used makes it feel a tad cheap considering the price of the phone. The phone does not make any noise when gripped and will certainly survive a fall or two.  Wish Nokia uses some metal on Maemo phones in future.  You would notice this especially when you put the N900 next to the N97 Mini which uses a lot of metal on the exterior. Sadly a huge percentage of users give a lot of importance to looks and the N900 might not win the Beauty Pageant for Mobile Phones if at all there was one. The N900 is a beast when it comes to multitasking and web browsing,  but the looks are too soft.

The Maemo UI is just lovely and there is lot of eye candy out of the box. The notifications system esp for incoming messages is super cool.  The interface certainly has a learning curve but any sensible user will pick it up easily. The multitasking is just fabulous and demonstrates the power of Maemo 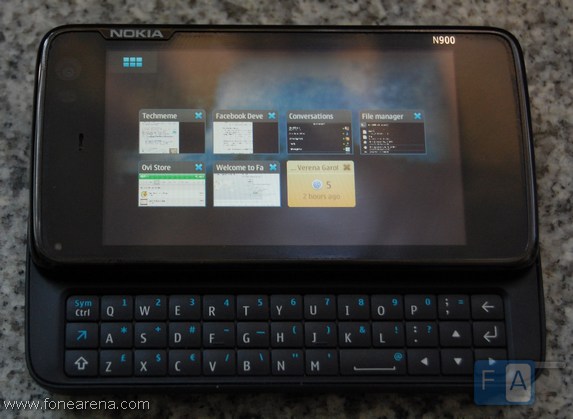 This is what you call multitasking 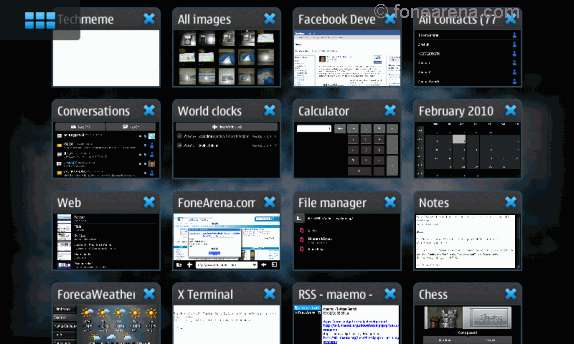 Call quality was pretty good and the phone functionality is pretty simple and easy to use. One cool feature is the integration of contacts with Google Talk / Skype contacts. One downside of the phone app is a lack of DTMF support out of the box. Signal strength was never an issue on GSM or 3G. And the best part is Skype calling right from your phonebook.

Since this device evolved from an internet tablet , connectivity is flawless.  You can choose to automatically switch to Wi-Fi from 3G / GPRS when you are near a hotspot.  The only issue is many phone networks don’t support automatic configuration of access points on the phone. So you might have to go the manually route.

The GPS receiver gets a fix pretty soon and is pretty accurate.

The Maemo 5 OS uses the concept of Conversations to group your SMS and IM such as Google Talk , Skype. This is good if you communicate a lot and don’t want to juggle between apps.

This device deserves the title of the best internet device. Considering the fact that this device has it’s roots in an Internet tablet it does not disappoint. In fact it amazes.The N900 has one of the best browsers in the market and brings PC-like browsing to the palm of your hand.

The Flash 9.4 support means that you can view full flash content within a webpage. Youtube, Vimeo are work fine.  You can even connect the phone to your TV and watch the action on the big screen.

The Browser does not support multiple tabs but you have to open multiple windows.  Zooming into a webpage is accomplished by double tapping , circular motion or using volume keys.

There’s a special hover mode which lets you use select text using a cursor and interact with page elements. You can invoke this mode by swiping your finger from the left of the screen. Swiping from the right side shows your browsing history for that window in a visual manner.

You can also install the AdBlock Plus plugin so that you can disable ads and save some bandwidth. You can also save web pages and later view them offline.

The device comes with 32 GB of inbuilt memory and has a microSD slot which supports upto 16GB cards. 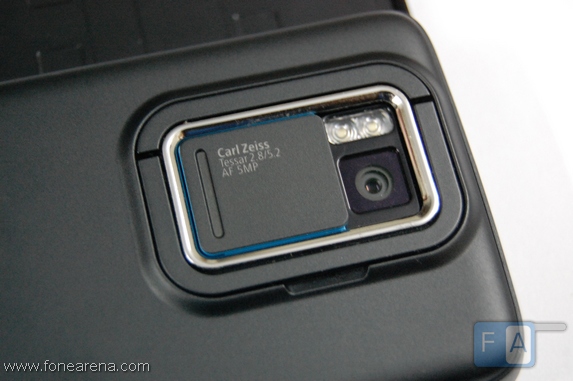 The Camera does take some great pictures and the fixed focus video recording which enables macro video recording is cool. But sadly the camera application is a bit slow. You might actually miss the moment in the process of capturing.  The sharing plugins like pixelpipe make photo sharing and blogging a piece of cake. You can even email multiple photos and upload them in a jiffy 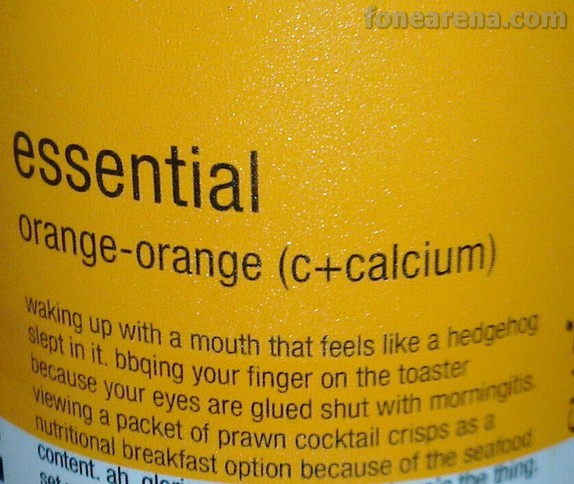 Music playback is decent and the playback via the stock earphones is pretty good.The speakers are quite loud too.

Video playback on such a big screen is good to watch and the kick stand does help. DivX support is worth mentioning.

But given the rise of AMOLED displays this one feel a bit dated although it’s not a deal breaker.

This is one area where we feel let down. The impressive hardware does not have apps which utilize the hardware like on other platforms.

Apps worth mentioning are Qik (video broadcasting), Angry Birds which is a cool game, Pixel Pipe which makes photo/video sharing a piece of cake. There is also Sketch which lets you draw on a canvas.

There is a Documents-To-Go viewer edition trial which lets you view office docs. The news from the maemo community is that KOffice is available.

There are some apps which have been developed by the community and the linux nature of the platform might bring a lot more apps to the platform. Nokia just needs to bring more developers on board the Maemo platform.

We hope to see more applications in the coming months / years for the Maemo Platform as Nokia has grand plans for Maemo with a Maemo6 device expected to launch towards end of this year.

The 1320 mAh battery on the device practically lasts for a day and half of light use and just about a day for heavy use.  As with all phones it lasts longer over Wi-Fi compared to 3G / EDGE.  The spec sheets don’t indicate battery life .At Nokia World , we heard that battery life was linked to user behavior and the device was built to last a day for average use.  We don’t complain about the battery life but a 1500 mAh battery would have given that extra run time ! And one tip ,  you don’t have wait for the battery to go empty before charging the device. Charge it when the the battery indicator is at about 50% and its charges faster.

If you are a person who loves to be online 24/7 , be it browsing the web, chatting with friends or checking email the N900 is a great option.  It’s a must have gadget for Linux enthusiasts or hackers.  This is not for the average consumer but a geeky crowd.  If you are one of those geeks you won’t be disappointed.  And if you are a fan of Open Source the N900 is for you ! Although the N900 lacks in a few areas ,  it’s pretty powerful in some areas.  It’s the first phone based on the Maemo platform and it’s obviously not complete. Maemo is a new ray hope for Nokia and the N900 is a live example of that hope . You may want to experience it or wait for the next device