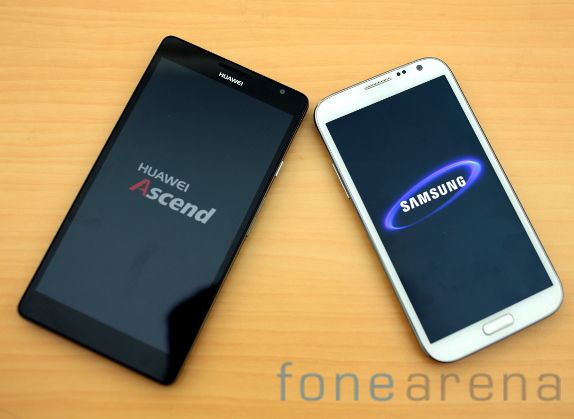 Huawei launched the Ascend Mate (MT1-U06) in India earlier this week at a price tag of Rs. 24,900, and we brought you the review of the device recently. We found the Ascend Mate as one of the best phablets under Rs. 25,000. Samsung launched Galaxy Note 2 in India last year, which is still one of the popular phablet in the India market. The company is also promoting the phone through EMI offers and Smart upgrade offers. The Huawei Ascend Mate would give a tough competition to the Note 2 mainly due the large screen and the price tag. We managed to compare both these devices. 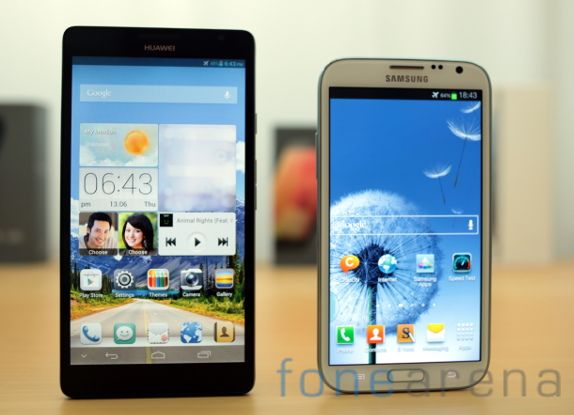 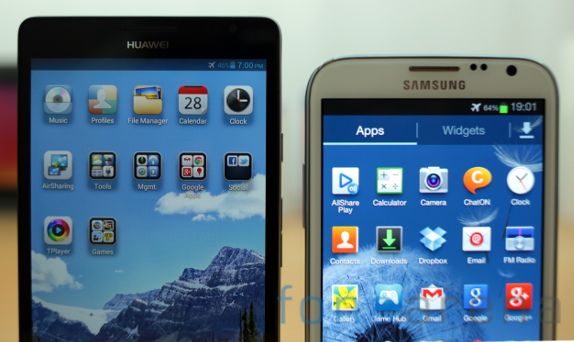 The Huawei Ascend Mate has a 1-megapixel HD front-facing camera and the Galaxy Note 2 comes with a 1.9-megapixel camera. Both the Accelerometer, LED notification Light, Compass, Proximity and Gyro sensors. In addition to all these the Note 2 has a Barometer or pressure sensor to measure atmospheric pressure. 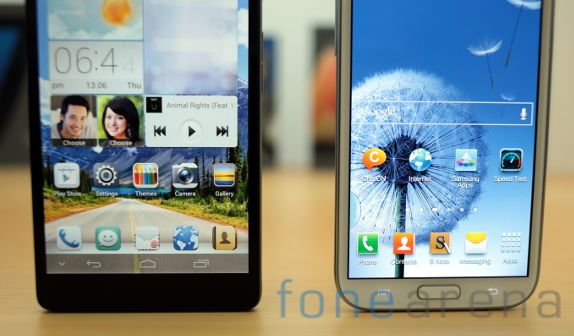 The Ascend Mate has on-screen buttons for back, home and multitasking. You can also hide the navigation bar to use the complete screen. The Note 2 has menu and back capacitive touch buttons and a hardware home button. 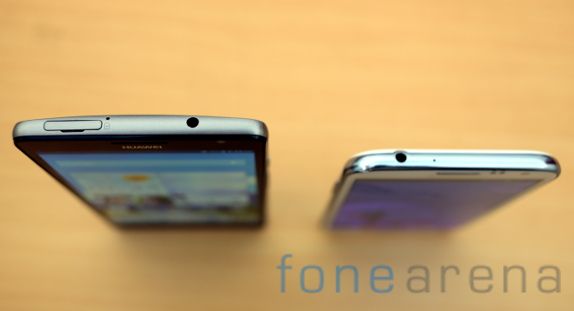 On the top both the phones have a 3.5mm audio jack and a secondary microphone. The Ascend Mate has a micro SIM card slot since it has a sealed back.

On the bottom both have a micro USB slot and a primary microphone. The Note 2 has a slot for the S Pen. 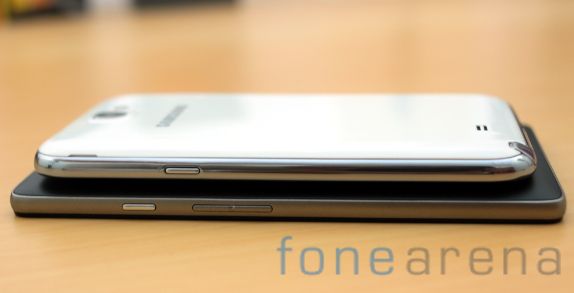 On the right side the phones have a power button. The Ascend Mate also has a volume rocker below the power button.

The Note 2 has a volume rocker on the left and the Ascend Mate has a micro SD card slot. 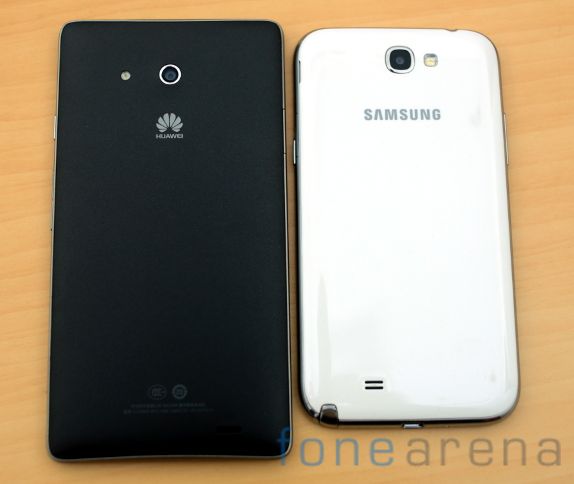 Both these phones pack a 8-megapixel camera with BSI sensor, LED Flash and full HD video recording. Comparing the image quality, both are almost similar, but the images from the Note 2 are slightly better. The logs of these phones are present below the camera. 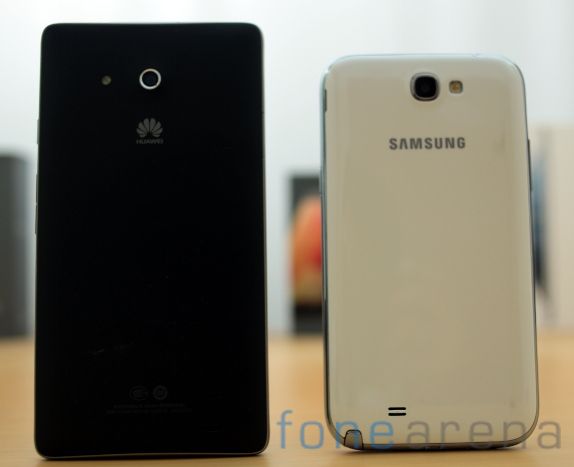 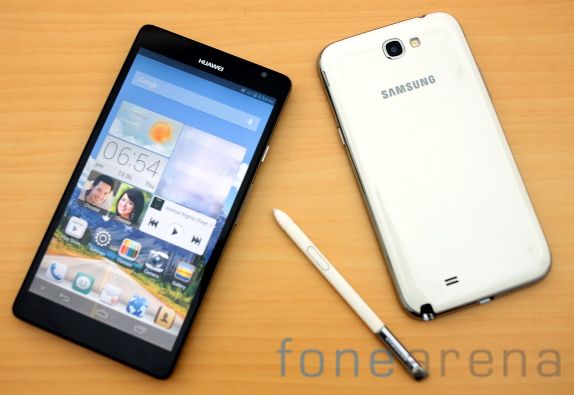 The Ascend Mate doesn’t come with a stylus, but the Note comes with a dedicated S Pen stylus. It also comes with dedicated stylus apps. 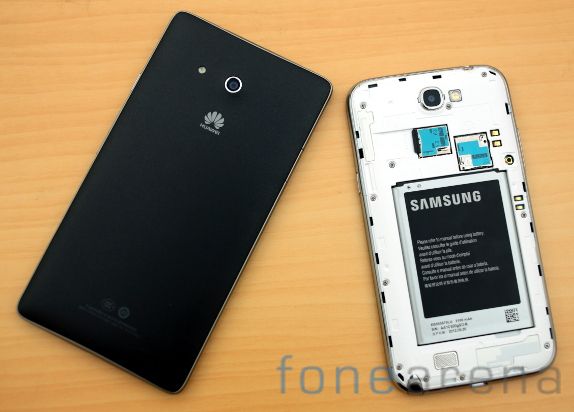 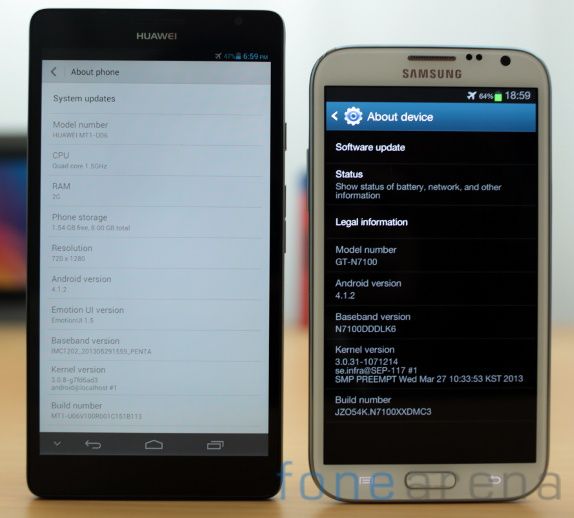 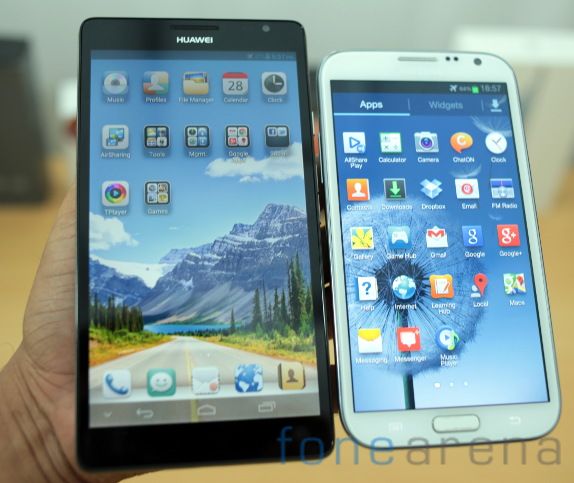