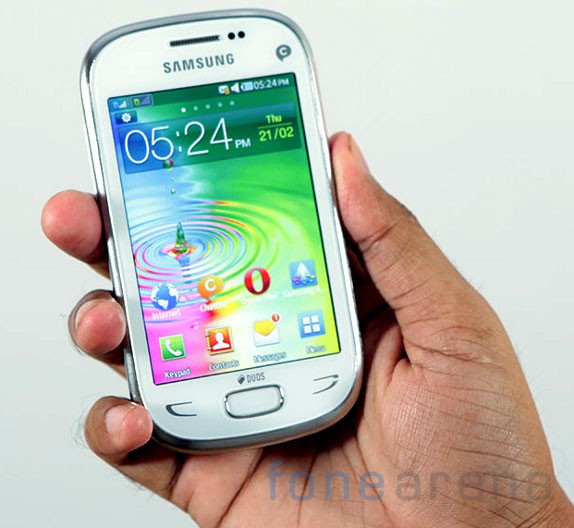 Samsung unveiled a range of java-based feature phones in the REX series last week. The REX 90 is the top-end model in the series that comes with dual SIM support with Smart dual SIM feature and True Hot Swap. You saw the unboxing of the REX 90 last week, here we have the complete review of the phone. Let’s dive into the review.

The box contents include a Samsung REX 90 phone, 2 pin Charger, Earphones and a 1000 mAh battery. The phone has a micro USB slot, but you don’t get a micro USB cable in the box. The headset design is quite different with slightly curved ends to fit your ear perfectly. 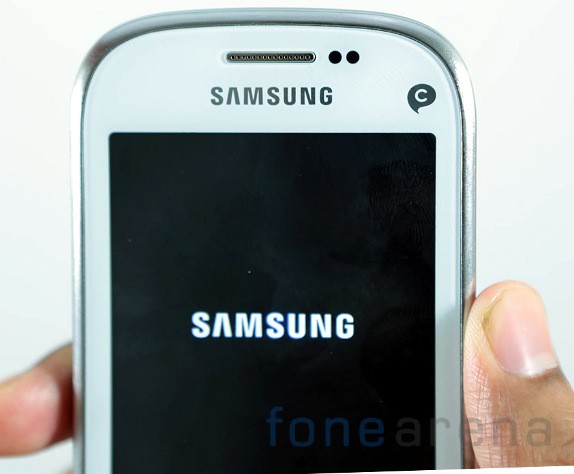 The phone has a 3.5-inch (480×320 pixels) TFT capacitive touch screen display is decent but it’s not impressive. There is a large earpiece at the top along with proximity sensor next to it. The phone has eye-catching design just like other galaxy smartphones. This has chrome finish even for an entry-level feature phone. The phone is powered by a 312MHz XMM2230 chip, hence it is not as fast as the Nokia’s Asha full touch phones that have a 1GHz processor. 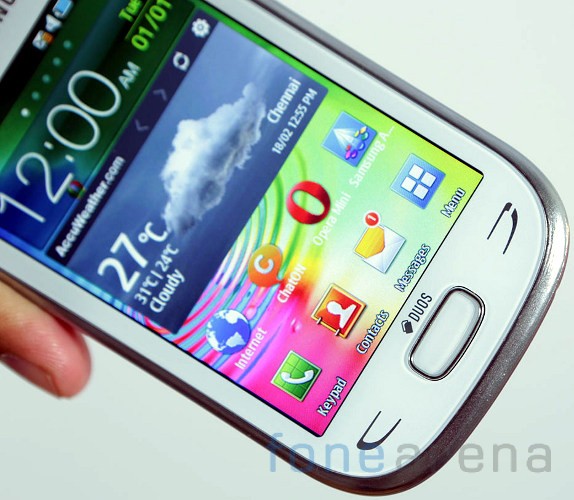 There is a large home button below the display along with call attend and call end keys on either sides.

The power button is on the right side. The phone is 11.84 mm thick and has chrome finish around the sides.

The volume rocker is on the left and there is a lanyard port about it. 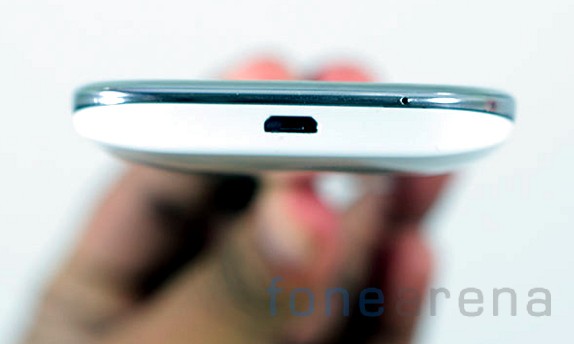 At the bottom there is a micro USB slot. There is a tiny microphone hole on the metal strip. 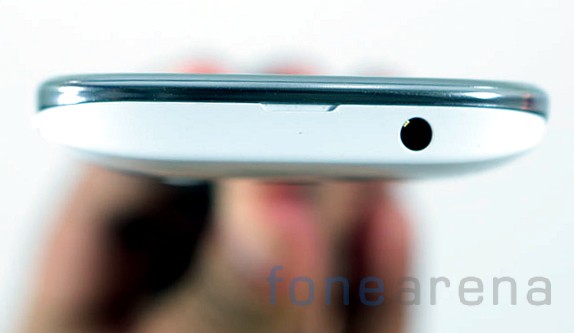 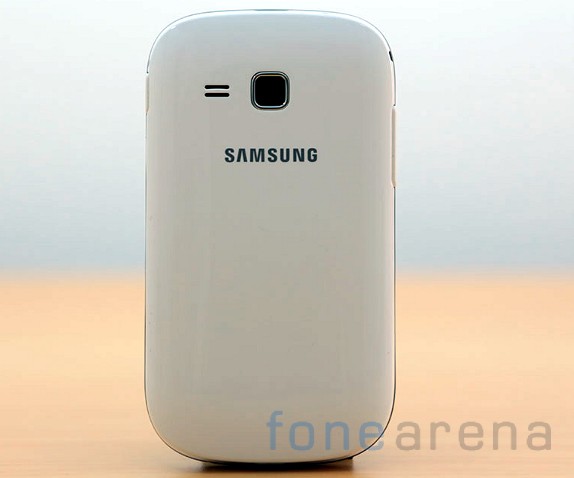 The phone has plastic back cover. There is a 3.2 Megapixel fixed focus camera along with a speaker grill next to it. You can spot Samsung branding in the center. 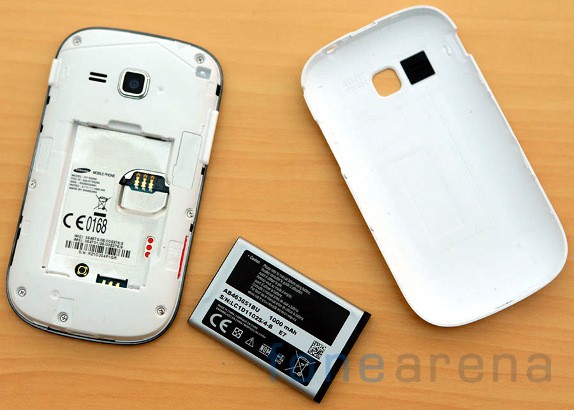 When you open the back cover, you can see the 1000 mAh battery. There is a primary SIM card slot under the battery. 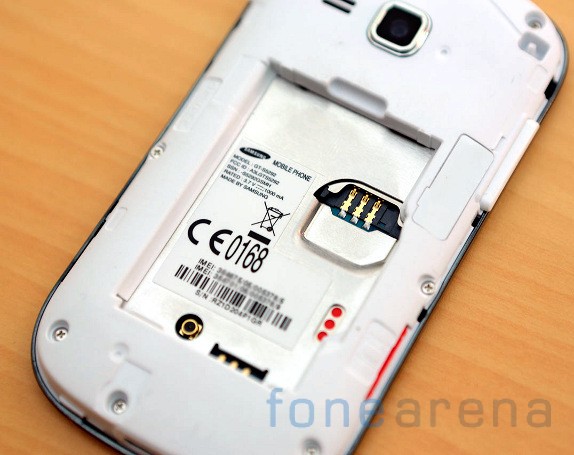 The secondary SIM card slot it hot-swap that can be replaced without removing the battery, but you need to open the back cover. Samsung is calling it true hot-swap. There is also a memory card slot on the left to expand the memory up to 32GB with micro SD. The phone has just 20MB of internal memory, so you definitely need to get a memory card. 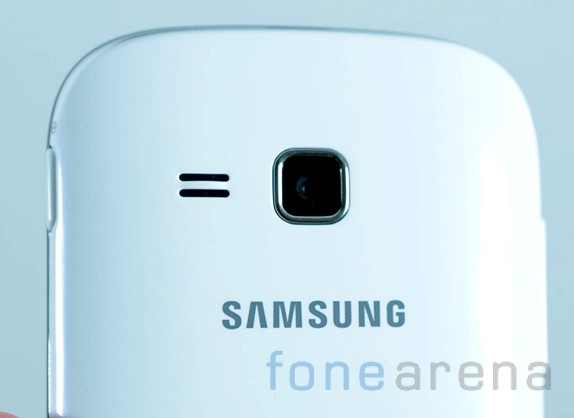 The 3.2MP rear camera captures decent shots. Since there is no auto focus, you can’t capture macro shots. 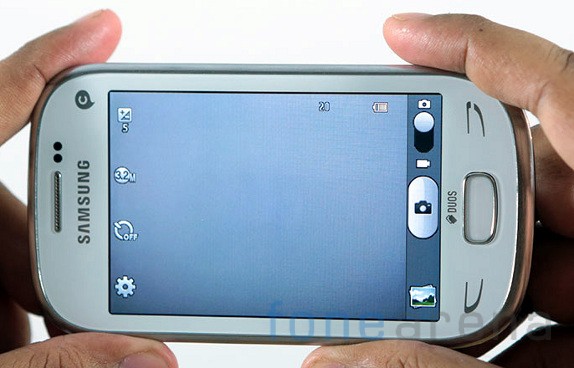 The UI is similar to the other Java phones. You can capture images at 3.2MP, 2MP, 1MP and 0.3MP resolutions. Other features include timer, effects (grey, negative and sepia), white balance , night mode, guidelines, review after image capture and camera quality. You can also directly go to gallery,share those images through Email or Bluetooth or set an image as wallpaper or caller image from the gallery.

Here are some camera samples (Click to view the full image) 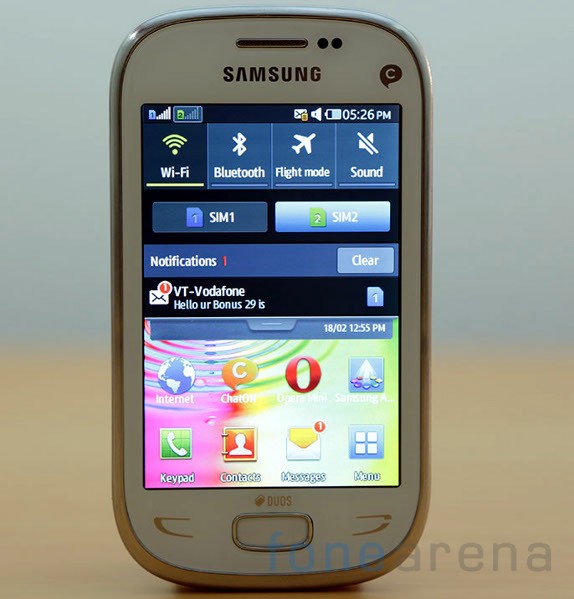 The phone runs on proprietary Java-based OS with Samsung Touchwiz UI on top. The UI looks pretty neat but the performance is not smooth. Transitions between various home screen are slow. There is a drop-down bar just like Android with toggles for Wi-Fi, Bluetooth, Flight mode and Sound. It shows notifications from both SIM 1 and SIM 2. There are several widgets including clock, weather by Accuweather and more. There are shortcuts for dialer, contacts, messages and menu at the bottom of the screen. This remains constant even in the app screen, but the menu changes to home, in the app screen. You can launch some apps directly from the lock screen just by swiping from the apps. You can also disable lock screen shortcuts, but can’t change them. 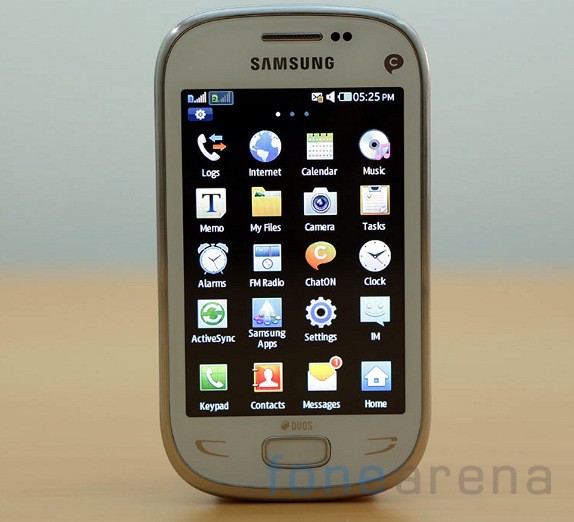 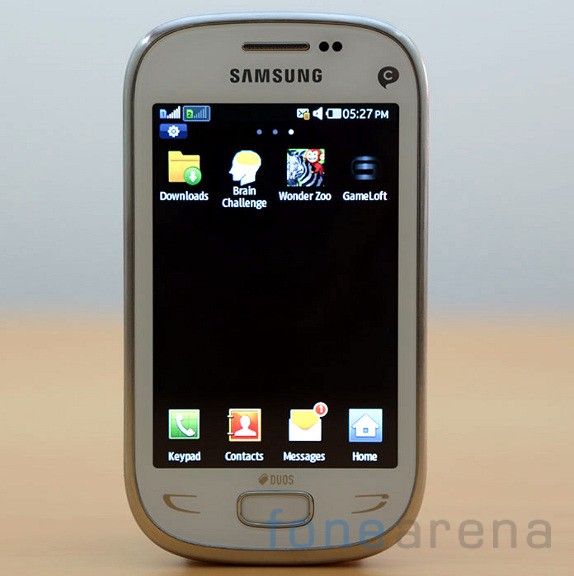 You can click the tiny settings button on top to rearrange these icons. 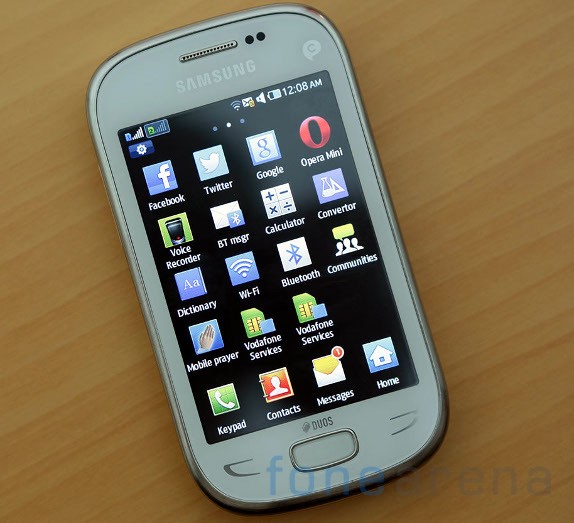 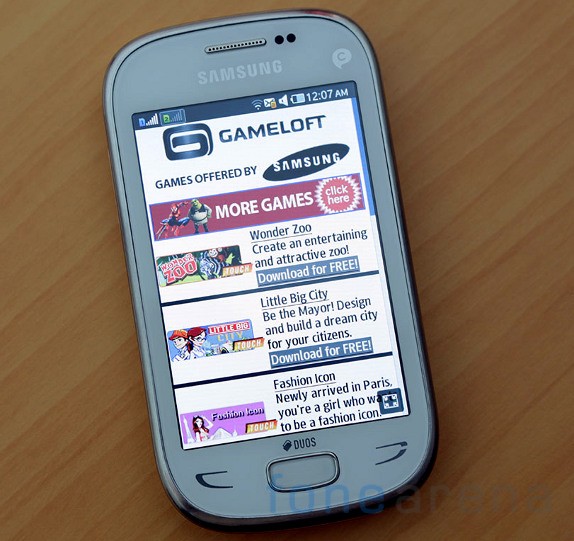 There is a Brain Challenge and Wonder Zoo game. There is a GameLoft icon that takes you to the Gameloft Java games page that lets you download 10 free full version games including Little Big City, Fashion Icon, Asphalt 6, Assasin’s creed Revelations, Blubble Bash 2 and lots more. 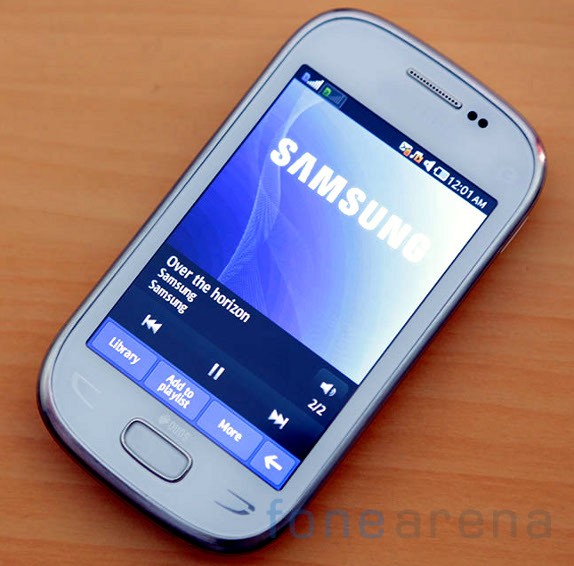 The phone has a simple music player with large album art, volume control and the usual pause / play, previous and next buttons. If you run the music player in the background, it shows up in the notification area with control options. It can play MP3, AAC, AAC+, eAAC+, Midi, AMR and WAV audio formats. Sound from the loudspeaker is pretty loud. Even the bundled earphones are decent. The library shows All track, Playlists and songs in different categories such as Albums, Artists, Genres, Composers and Years. There is an equalizer option with different presets and music auto off, in the settings. The video player supports MPEG4 video format. 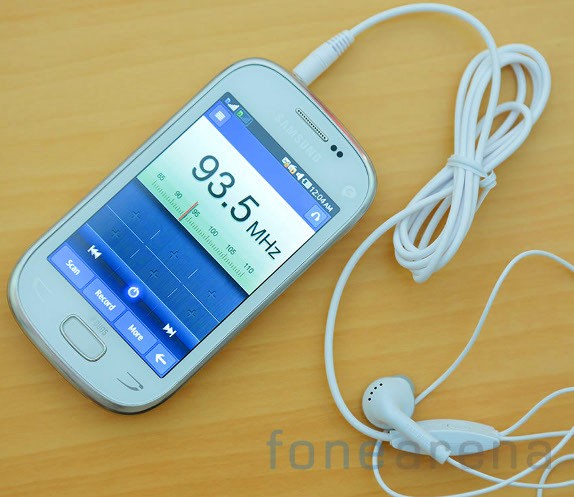 The FM Radio has RDS with recording. It has auto scan option that scans and stores the FM stations automatically. You can change the recording location (phone or memory card) and Auto FM Radio on/off from the settings. The Programme reminder lets you create reminders when you don’t want to miss a program. 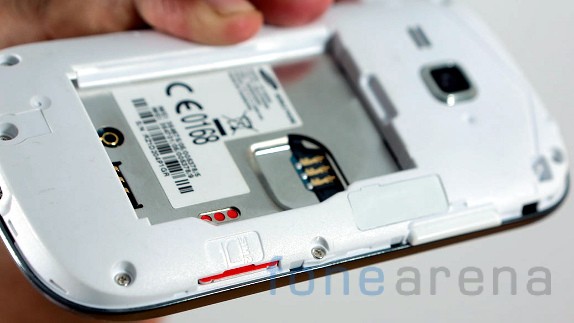 The phone has WiFi b/g/n and Bluetooth 3.0. It has 2G (EDGE) support for data connectivity but lacks 3G. There is a SIM card hot-swap option for the secondary SIM card . The phone has Smart Dual SIM feature that lets you receive calls from SIM 1 even when the SIM 2 is in use. You can switch between either SIM cards just by holding the home screen and selecting options from the screen. You also have option in the dialer and Text Messages to call or send messages from either SIM cards. There is call duration and messages counter stats from these SIM cards separately.

There is a SIM cards management option in that settings that lets you configure data connectivity, SIM card name, Smart dual SIM and more. The SIM auto switch is a unique feature that lets you switch between either SIM cards within a certain time period. 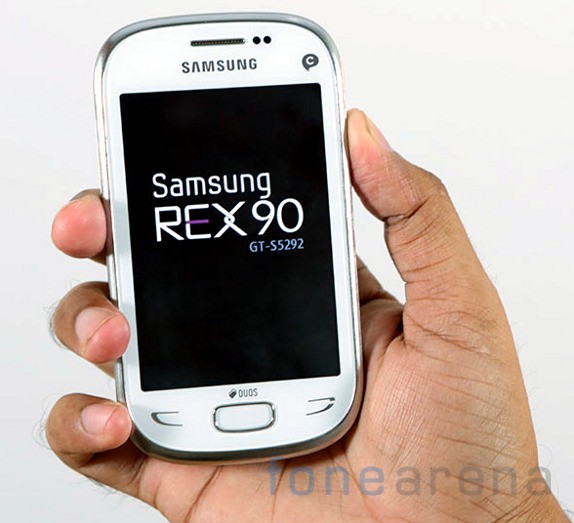 Samsung has just re-branded the Star series. Star 3 Duos was announced early 2012 when their Android-powered Galaxy smartphones were just starting to get popular. Since there is a huge market for budget Android smartphones in India, it is definitely tough to sell these java-based phones in the current scenario. Nokia launched the Asha 311, their first full touch phone based on the S40 Java OS last year, and we reviewed it last August. Even though it had several drawbacks including lack of multitasking, GPS and apps, it offered a smooth experience and comes with 3G support. It costs less that Rs. 6000 in the market. The Nokia Asha 310 with dual SIM support was announced recently which would compete directly with the REX 90 since it comes with 2G support. At a price tag of Rs. 6,490, the Samsung REX 90 doesn’t make quite a compelling offering.