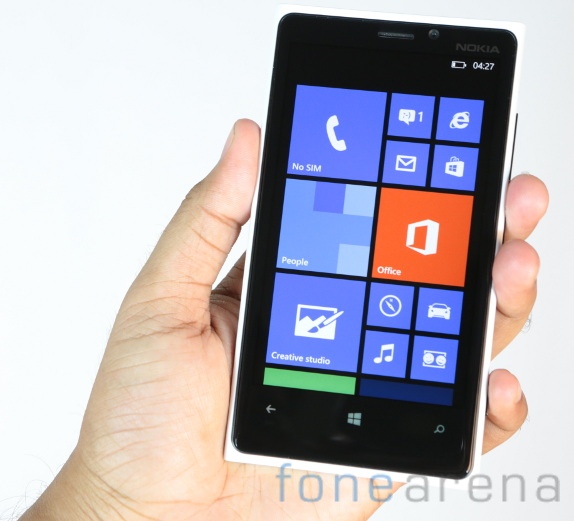 Nokia announced the Lumia 920, their latest flagship device that runs on the Windows Phone 8 back in September. You saw the unboxing of the Lumia 920 recently, here we have the complete review of the smartphone. It is powered by a 1.5 GHz dual-core Qualcomm Snapdragon S4 processor and has a PureView Camera with Carl Zeiss optics and Optical image stabilization. Let’s get into the detailed review. The 4.5-inch (1280 × 768 pixels) Pure Motion HD+ IPS display with 332 PPI pixel density and 600 NITS brightness is stunning. It also has gorilla glass protection similar to the Lumia 900. The images and videos are sharp. Even though the phone is white, it has a black bezel around the display. The Lumia 900 had a larger poly carbonate shell outside the bezel, but the 920 has a larger bezel with minimal shell. Since the phone has oleophobic coating, the are no smudges in the screen due to fingerprints. There is a 1.2MP front facing camera at the top. There are capacitive touch buttons for back, home and search at the bottom. These give haptic feedback when pressed. On the right side there is a volume rocker, Power / lock button and a dedicated camera button. The phone is 10.7mm thick, bit thicker than the HTC Windows Phone 8X that is 10.1 mm thick.

At the bottom there is a micro USB slot along with loudspeakers. There is a micro SIM tray at the top. You need to use the tool provided in the box to eject the SIM tray. The build quality is good, and the phone feels solid in hand. It is quite heavy at 185 grams, compared to latest Android smartphones. At the back you have 8.7 MP PureView Camera with dual LED flash, Carl Zeiss optics and Optical image stabilization. It can recording videos at 1080p video resolution. Underneath, there is a 2000 mAh battery and the back plate has built-in Qi wireless charging. The 8.7 Megapixel camera takes excellent shots. The latest BSI sensor and the PureView imaging technology improves low-light imaging better. You can just take an image in dark without flash, and the image looks perfect. Even the dual LED flash doesn’t spoil the image, the high power / shortpulse flash fires at exact time making the image more brighter, evenly. Since the phone has a smaller sensor than the 808 PureView, this doesn’t have lossless zoom, but the image quality is good.

There are different scene modes ( Auto, Close-up, Night, Night Portrait, Sports and Backlight). You can control ISO settings (100 to 800), White Balance and Exposure Values (+2 to -2). The aspect ratio is 16:9 by default, which you can change to 4:3. The camera’s LED light offers focus assist option that would let you focus an object better, which you can disable from the settings. Auto mode doesn’t work every time, if you want macro, then you have to choose Close-up manually to get a perfect macro shot. Likewise, you can set other scene modes according to the environment.

There are lenses, a new feature in the Windows Phone 8 inside the camera that would let you launch the camera-oriented apps directly from the camera UI. Bing Vision and Smart Shoot are pre-installed. Bing Vision was already available in the WP 7.5 in the search tab that lets you scan QR code, translate text etc. The Smart Shoot app takes 5 successive shots, and lets you choose a perfect image among those. You can also download apps such as Cinemagraph, Bing Translator and more with lenses feature.

Here are some camera samples (click to view full images) The video camera lets you adjust white balance and offers continuous auto focus. It can record video at 1080p Full HD resolution, but 720p is the default option. The Optical Image Stabilization (OIS) in the video recording is a great feature. Even though the video quality and the audio are not as good as the 808 PureView since the Lumia 920 records the audio in mono, the video looks perfect. You can now set Bing wallpapers as lockscreen Background. You can get lockscreen notifications for missed calls, messages, email, Skype, games etc. The Kid’s Corner let the kids use their parent’s phone to play games and access select apps from the Kid’s corner section, even if the phone is locked. You can add apps and games and set a password for the lockscreen. Your kid can just swipe from right to left from the lockscreen to open apps and games from the kid’s corner. Even if you disable Kid’s Corner, you have to manually turn off the passlock manually from the settings, which is annoying. Battery saver now has advanced option that would let you enable it always, other than enabling it when the battery is low or until next charge. All the background apps resumes quickly, without restarting. Backup option in the settings lets you backup app list and their settings in the cloud. Backup also includes text messages backup and auto photo upload to the SkyDrive.

Nokia and Microsoft rolled out v8.0.9903.10 update along with the Nokia’s PR 1.1 update for the Lumia 920 on AT&T and Rogers in the US and Canada recently that improves the Camera, Messaging features, Option to keep the Wi-Fi on even when the screen is off, Bluetooth connectivity enhancement and more. The phone comes with several pre-installed apps. You can also download more apps from the Nokia collections in the Windows Phone Marketplace. Nokia Maps app lets you download offline maps for a particular place and the Nokia Drive shows driving directions. The Drive+ Beta app for the Lumia 920 brings spoken street names, option to select types of route to avoid and offers improved battery life while the app runs in background. Nokia City Lens Augmented Reality app lets you explore places around you just by pointing the camera in a direction. You can download several apps from the Nokia collections. Some of the best apps include, the recently launched PhotoBeamer app that lets you share images to a browser easily over WiFi, Words With Friends and Panorama app that lets you take panorama images. The Music Player is simple, and similar to the previous versions that has shuffle and repeat functions, other than play / pause, move to previous and next songs. You can share the name of the song you are listening to social networks, email or SMS. It can play AAC, AMR,M4A, MP3, MP4, WAV and WMA audio formats. The audio was loud from the loudspeakers and the headphones. There are different equalizer modes, and you can enable Dolby headphones from the settings when you plugin earphones. The Dolby mode enhances the audio to make it more punchy and clear. The phone doesn’t have FM Radio support. The phone can also play different video formats including 3GP, M4V, MP4 and WMV. The dialer is similar to the previous Windows Phone version. The People Hub adds Rooms, that lets you share calendar, photos and chats privately. Now you can attach your location and contacts to messages. You can also select multiple threads to delete. You can now backup text messages online and there is a group MMS option that keeps replies in a single thread. The Keyboard looks similar to the WP 7.5 keyboard, but this has emoticons. Text to speech now offers male and female voices, and there are several speech languages including Indian English, Spanish and more. The Internet explorer 10 is much faster and better than the earlier version. You have option to change the search provider to Google from Bing. You can also block cookies, filter against unsafe websites with SmartScreen Filter and send a Do Not Track request to sites when you visit. It scored 320 points in the HTML5 test, way better than Internet Explorer 9 that scored just 139 points with 5 bonus points. The Internet Explorer 10 in the Lumia 920 scores 919 points in Sunspider JavaScript Benchmark, almost similar to the iPhone 5’s Safari Browser. There is a ‘Transfer my data’ app to transfer contacts from any Bluetooth supported phones easily. You can share images, music and office files over Bluetooth, but you can’t share videos. The Bluetooth file transfer is slow between the 920 and the Android devices. The NFC sharing works only with the other NFC-enabled Windows Phone 8 devices.

The phone doesn’t have a HDMI port and there is no MHL support either. Nokia released an app called PlayTo earlier this year for Lumia Windows Phone 7.5 devices that would let you share photos and videos from the phone to DLNA-capable devices, but the app is expected to release for the Windows Phone 8 Lumia devices only in Q1 2013.

The Nokia Lumia 920 is no doubt the best Windows Phone 8 handset. The display is awesome, and the PureView camera with 1/3″ image sensor, BSI and OIS improves the low-light imaging and video recording a lot. The phone has a solid build quality and the performance with the Snapdragon S4 coupled with the 1GB is good. The 2000 mAh battery lasts about 2 days and the phone also has built-in Qi wireless charging. Windows Phone 8 brings several new features including mass storage, better browser and more, but the Windows Phone app collection is still improving, and most apps and games are still missing for the platform. If you want  good hardware, an outstanding camera and you are comfortable with the OS, and can handle a large phone, go for it.