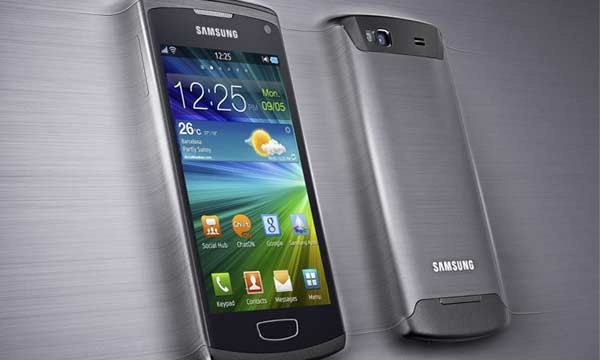 We already know that recently Samsung India has launched three new smartphones in 3 different platforms namely, Android, BADA and Windows Phone. We attended the launch event in Delhi and here are the hands-on photos of Samsung Wave 3. Enjoy…

The Samsung Wave 3 is the latest flagship model from Samsung in their BADA line-up and priced in India at Rs. 19600/- which is MRP. As we all know that BADA is the Samsung developed OS for their own devices. BADA is also going to be Open Sourced in 2012 as per Samsung Global. The new Wave 3 actually has a uni-body but battery is still removable as we can slide the battery door towards up and can remove the battery. It’s definitely one big advantage than other manufacturer’s unibody design where battery is not removable. Wave 3 uses a 1500mAh battery.

The Wave 3 is almost made of fine Aluminium including the sliding battery door with brushed metallic finish which feels quite fantastic in hands. Only top and bottom parts of the Wave 3 is made of plastic similar to the original Wave and Wave 2. The key structure is very similar to the Samsung style where Volume Rocker is at the left side of the device and the Power/Lock key on the right side. Unfortunately Samsung has removed the Camera Shutter key on the Wave 3 which was available on both the first Wave and Wave 2. Backside we have 5MP AF Camera with LED Flash and speaker grill. The Micro-USB port and 3.5mm jack is at bottom. The front side similar to older Wave phones, there is physical Home key but this time both menu and return touch keys are removed and their functionalities are now with onscreen keys.

The another major change in Wave 3 is the bright and stunning 4” Super AMOLED display which was also used in Samsung Galaxy S I9000. The display was quite responsive to touch and its already multi touch ready. Despite the matrix is Pentile we found that display was quite nice for reading text and overall it was much better than original Galaxy S. We think that Samsung has improved these Super Amoled displays since it’s first debut in Galaxy S.

Wave 3 is the first BADA flagship which is running BADA 2.0 out of the box. First thing we noticed is that the OS was very fast in term of responsiveness. As soon as we clicked on any application the overall execution time was hardly a second. Samsung has also improved the multitasking in BADA 2.0, and now we can actually see which apps are running in background and kill them manually one by one or by all at a time. ChatOn is now built in all new BADA 2.0 phones including Wave 3. One thing we also noticed that BADA 2.0 is using slightly modified TW 4 and hence it looks very similar to TW4 running in Samsung Galaxy S II. There is also native UMTS Video Call facility similar to Wave and Wave 2. Wave 3 has Front Facing Camera for native video calls.

We will soon have Wave 3 review on FoneArena