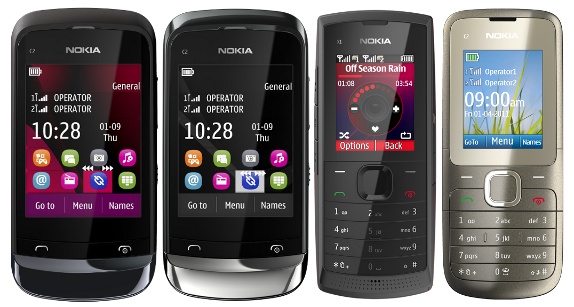 Stephen Elop, the CEO of Nokia has said that the recently launched Nokia Dual SIM phones are seeing exceptional sales in the Indian market. Even though there are lot of Indian competitors such as Maxx mobiles, Micromax, Karbon  etc in the Dual SIM category, Nokia lead in the market share. Elop, on his second visit to India since he took charge as CEO of Nokia, said that, India played an important part in the company’s transition strategy.

The Finnish handset maker has introduced 4 new Dual SIM phones since June that include the Music phone, Nokia X1-01 and 2 touch and type slider phones, Nokia C2-03 and Nokia C2-06, and stylish Nokia C2-00. All these are low cost feature phones with basic features like FM Radio, long battery life and expandable memory.

The company lost their market share considerably in high end due to the Android devices and the iPhone, but they aim to grab some market share with the launch of Windows Phone devices in the last quarter of 2011. Nokia 100 and 101, cheap Dual SIM phones are expected to launch later this year, and they have plans to introduce more low cost Dual SIM feature phones in coming months.