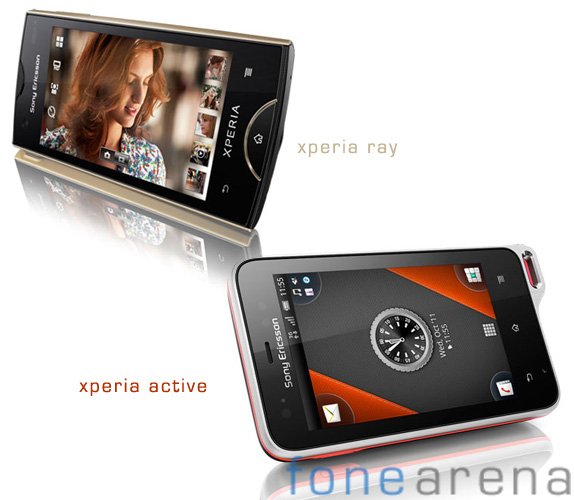 Sony Ericsson today announced the XPERIA Ray and XPERIA Active at an event during CommunicAsia 2011 at Singapore. Looks like SE is committed to Android. Sad to see that the rumoured Duo din get announced nor WP7 phones.

The Ray reminds us of the one of Sony Ericsson devices was leaked earlier. It sports a 8.1 MP Camera with Exmor R optics. The 3.3 inch display is powered by the Mobile Bravia Engine. The phone is powered by a 1GHz processor and runs on Android Gingerbread(2.3.3). The phone weighs 100grams and just 9.4mm in terms of thickness. It looks similar to the Xperia X10 and X10 mini launched last year.

The Active is an interesting phone. It is dustproof and waterproof. It is powered by a 1GHz processor and runs on Android Gingerbread. The display is scratch resistant.It sports a 5MP camera. Looks like this phone is targeted at athletes as it comes with GPS , Barometer , wrist strap and arm band.

Both these phones are expected to hit the market in Q3 2011.Pricing has not been revealed.