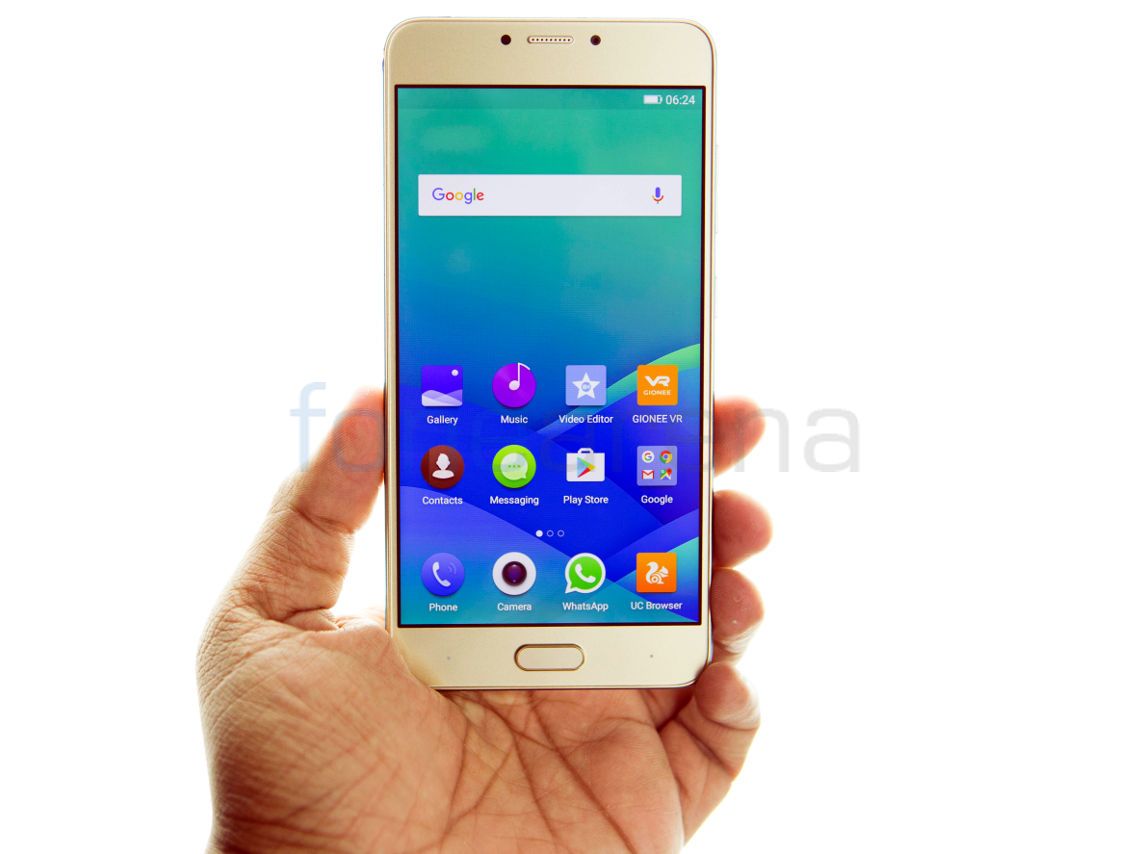 Gionee launched its high-end full metal-body S6 Pro last month in India for Rs. 23,999. The smartphone was first announced in China earlier this year in June and it is essentially a slightly tweaked version of the recently launched Gionee S6s. The phone boasts of 97% metal body design and an octa-core MediaTek Helio P10 SoC with 4GB of RAM. Is it worth? Here’s our full review. 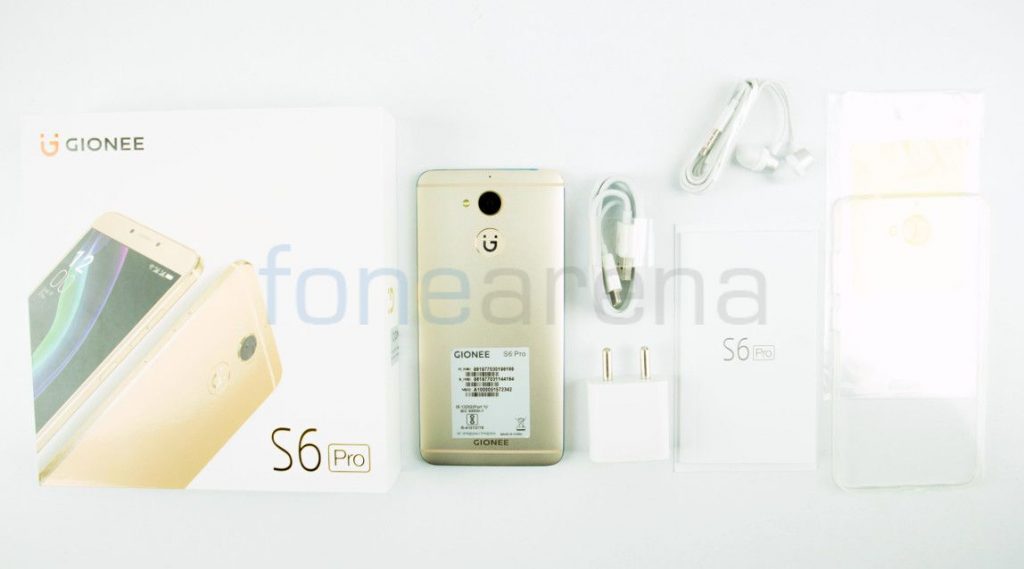 The design of Gionee S6 Pro is definitely appealing. The handset looks and feels premium. The chamfered edges are painted blue but unfortunately our review handset didn’t have linear highlighting and the colour peeled off from certain areas too. Other than that there is nothing new in terms of designing. We have seen more or less similar design in most Chinese smartphones. 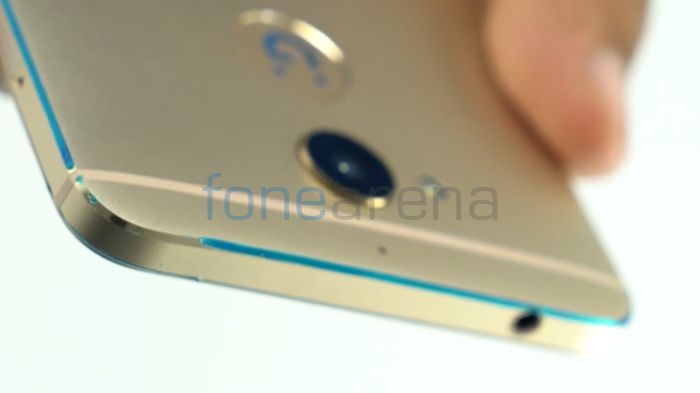 Apart from the front glass display, the entire handset body is made of aluminum-magnesium alloy, which Gionee says is 97% of the complete body. The build quality is really nice and the phone feels solid in hands. The thickness of the S6 Pro is 7.6mm, but the phone doesn’t feel lightweight. The handset weighs 170 grams and measures at 153 × 75.26 × 7.6mm. 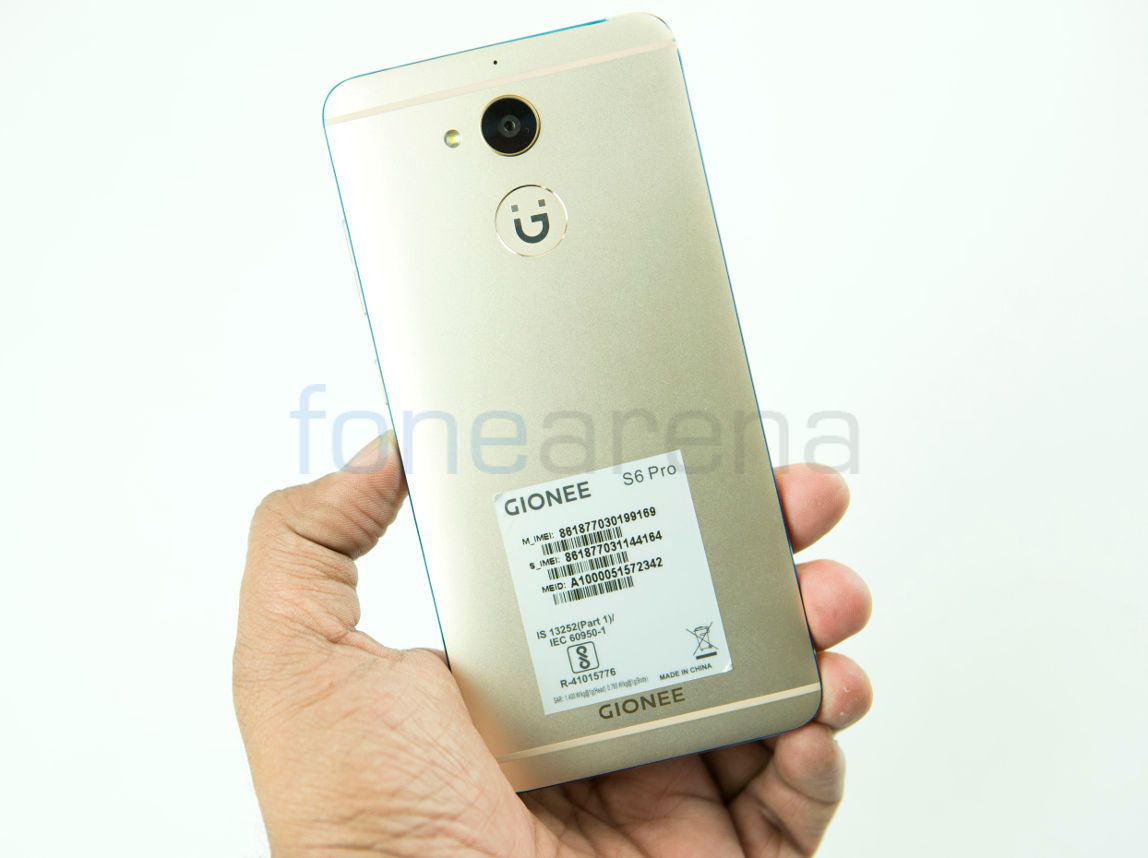 The display is slightly glossy and attracts a bit. The metal-back boats of brushed metal finish and doesn’t attract fingerprints or smudges at all. The Gionee S6 Pro comes in three colour variants – Silver, Gold and Rose Gold.

The top of the display features proximity and ambient light sensor followed by earpiece grill and front-facing 5-megapixel camera. 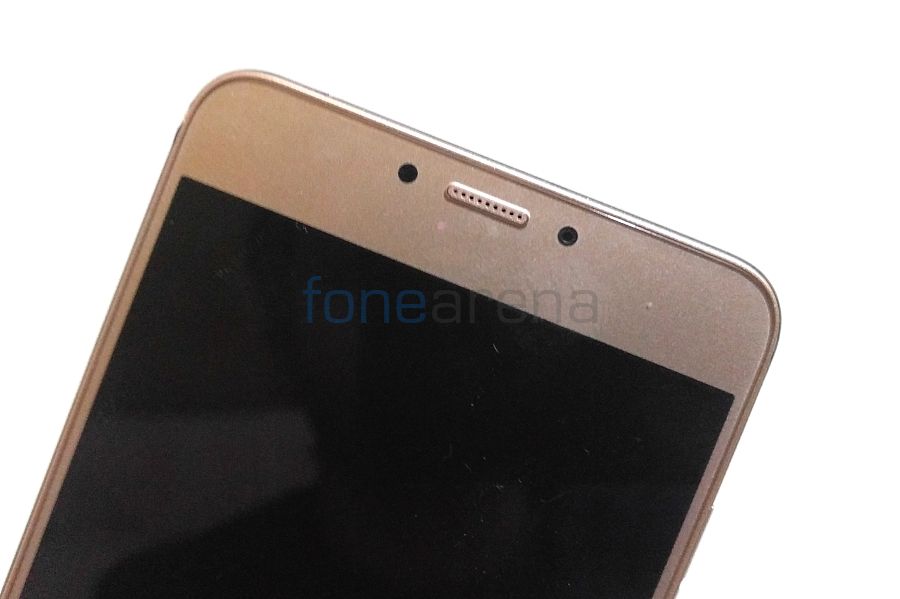 The bottom of the display has two capacitive touch buttons (Recent and Back) and a Samsung like physical home button with fingerprint sensor.

The right side of the smartphone features volume rocker key and the power/ lock key. The left edge only has hybrid dual Nano-SIM tray. The 3.5mm headphones jack and the secondary noise cancellation mic is on the back, on top of rear camera.

The Type C charging/ data port sandwiched between two speaker grills is located at the bottom edge. The left side grill has primary microphone and the right grill has a speaker in it.

The Gionee S6 Pro features a 5.5-inch full-HD (1080×1920 pixels) IPS 2.5D curved glass display, although it just feels like any other normal display and not like a 2.5D curved screen that we’ve seen on other smartphones. But having said that, the display colour reproduction is great. It is very sharp and super bright, so there will be no issues looking at it even under direct sunlight. The viewing angles are decent as well. Overall, we really liked the display.

The internal storage is 64GB, but on first you’ll get about 50GB of free space. Also, the storage can be expanded via microSD card (up to 128GB) and phone also supports Type C USB-OTG and it works great.

Talking about the phone’s performance, it is average for a high-end smartphone. Usually you won’t have issues like hang or screen freezing, but if some apps starts behave a little weird then the phone might as well just need a reboot. We only had little issues with apps crashing sometimes, but otherwise the mutitasking was smooth. The games like Subway Surfer and Temple Run had no issues whatsoever, so was the case with heavy games like Asphalt 8. Also, the phone doesn’t heat much.

Coming to the software, the S6 Pro runs on company’s own Amigo OS 3.2 UI based on Android 6.0 Marshmallow. Like the other Chinese smartphones UI, all the apps are on the home screen and there is no app drawer like stock Android. Unlike Xiaomi phones, you can always install Google Now Launcher, if you like the app drawer. 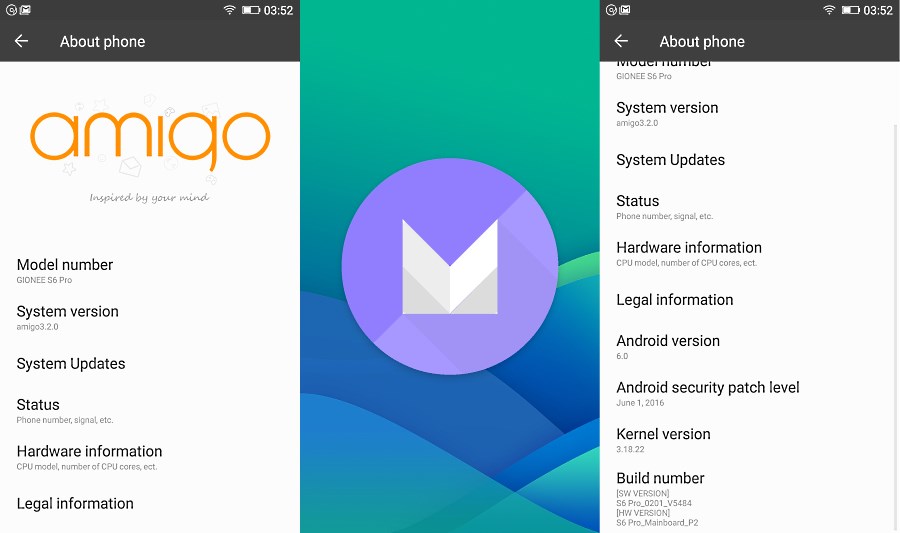 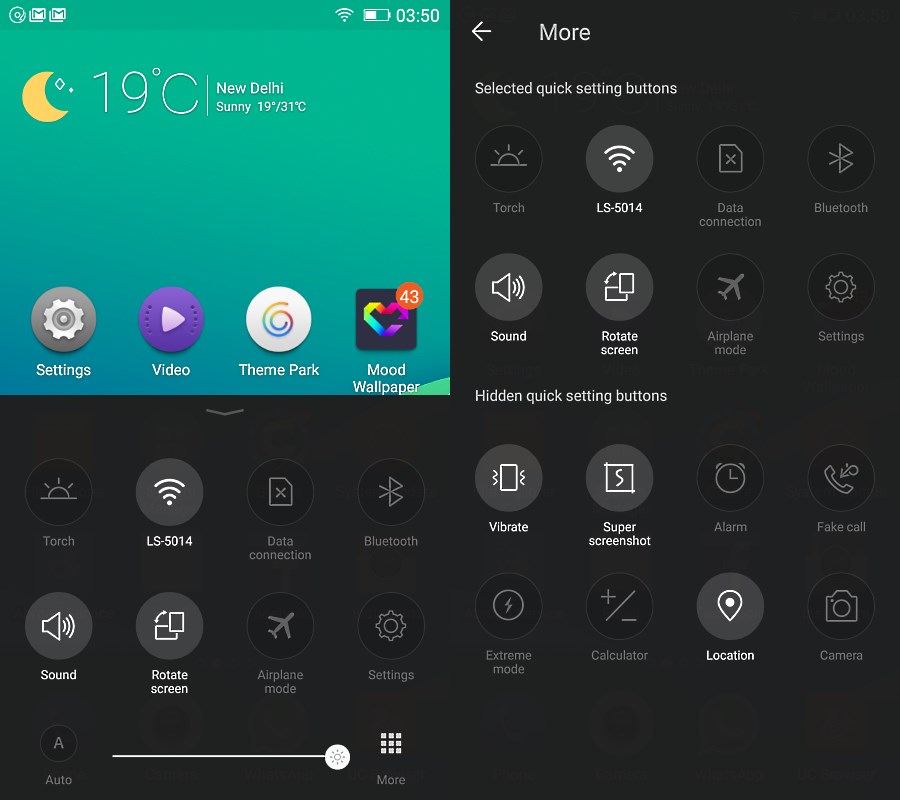 There are not many interesting settings otherwise, but few nifty features include some ‘Smart Gestures’, the option to interchange Menu and Back keys, and ‘Split screen’ option (divides home screen in two working areas). 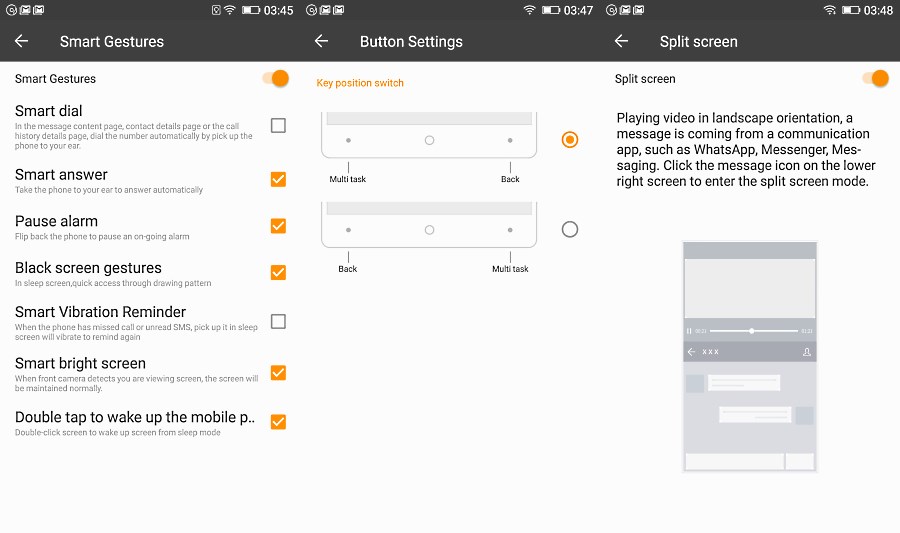 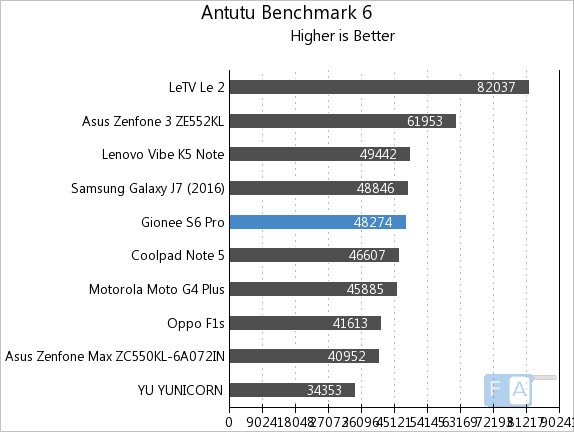 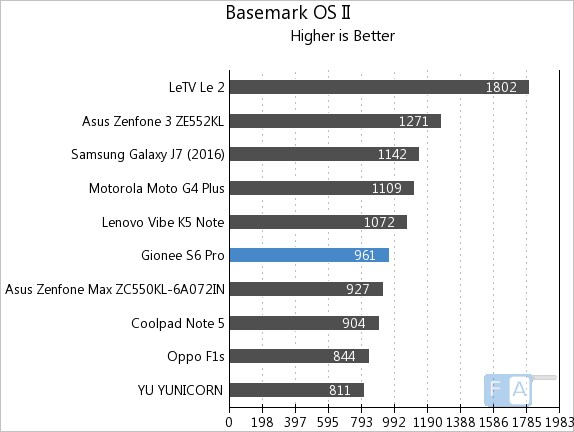 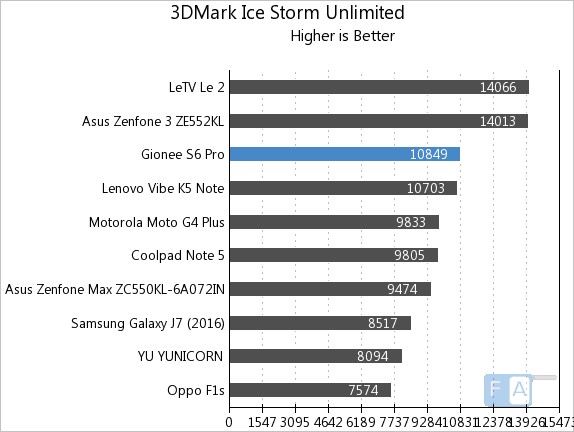 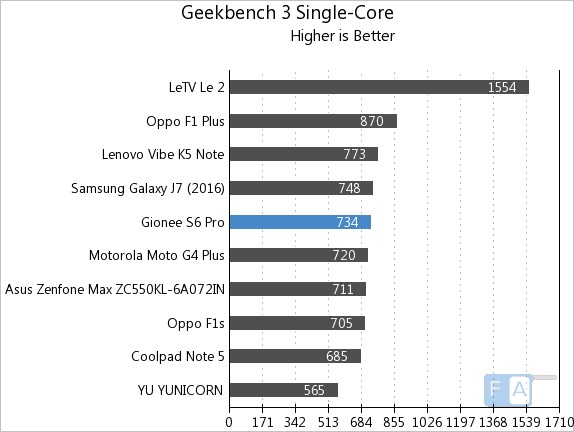 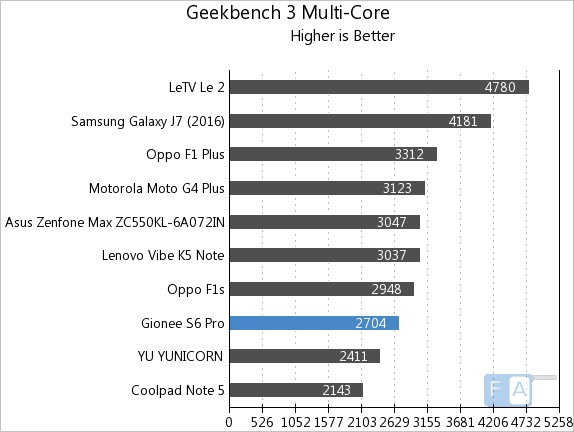 The Gionee S6 Pro boasts of DTS audio. There are two loudspeaker grills at the bottom, out-of-which right grill only has the speaker inside. The output is decent in quality and is loud enough too, but speaker grill location is such that it usually gets muffled, especially while watching videos.

The S6 Pro comes with bundled in-ear headphones. These are of no good quality and the output isn’t loud enough too, but we tried different pair of earphones and those work fine with the smartphone. The phone also has FM radio. 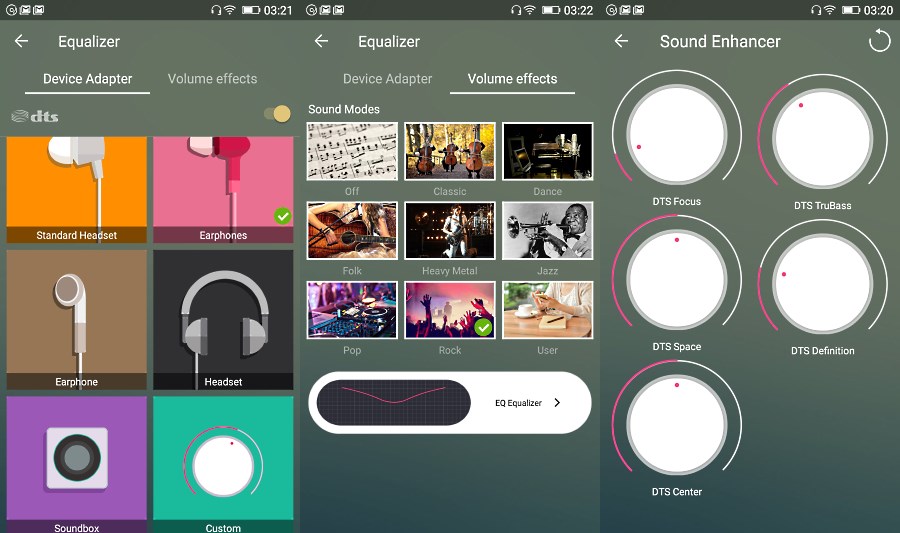 Gionee’s stock music player is really good. It has quite a few options/ settings that you’ll enjoy, such as different type of headphones selection for DTS output, some good preset options, equalizer settings, sleep timer for the app and more. Check screenshots below. 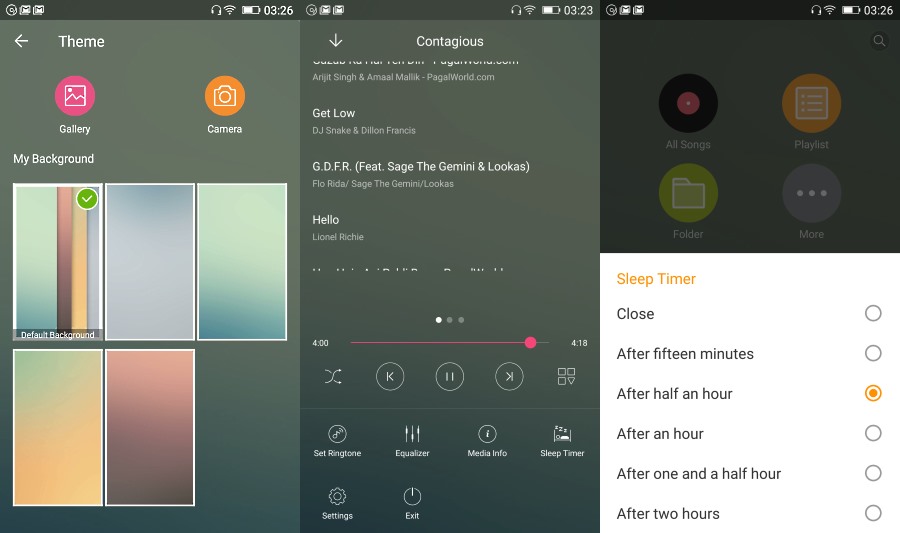 Talking about the video quality, the S6 Pro can play up to full-HD (1080p) and it is at par with any other good smartphone. So overall, the S6 Pro does a decent job in both audio and video departments. 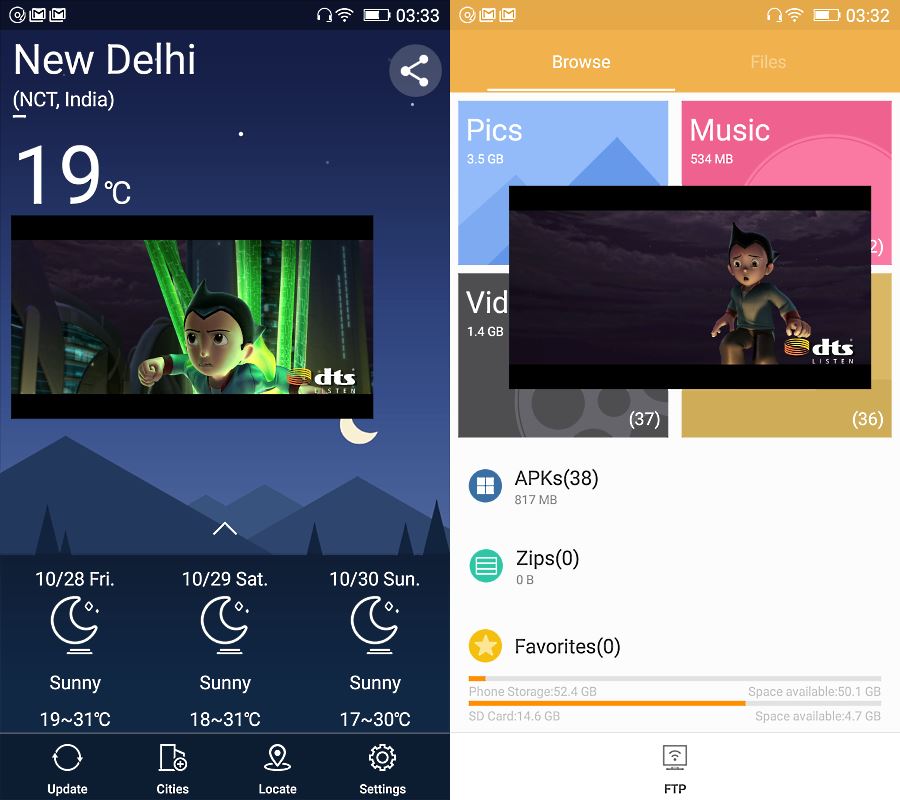 The Gionee S6 Pro has a fingerprint scanner on the home button, similar to Samsung Galaxy smartphones. So you need to wake the phone first to unlock. 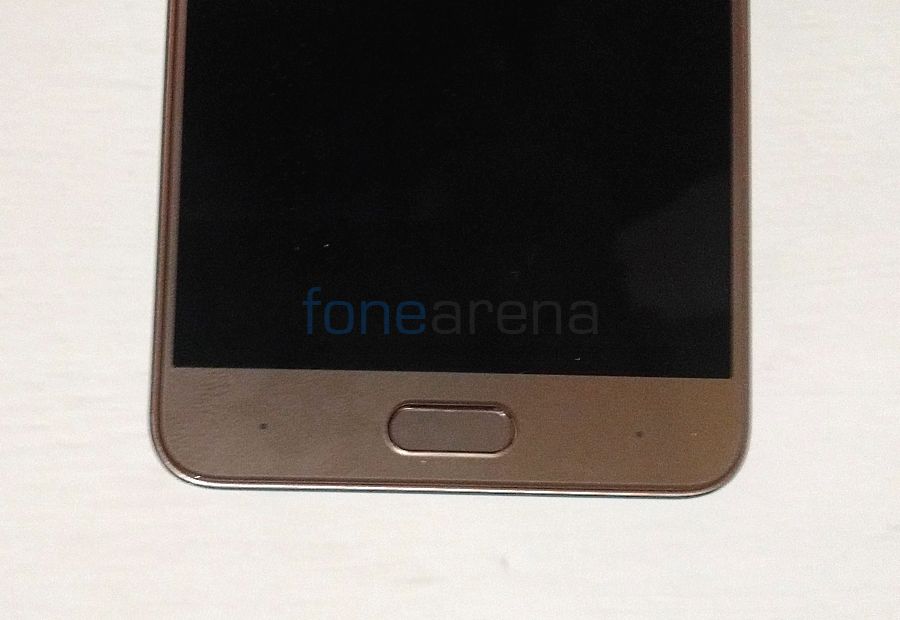 In our testing/ usage, we found that the fingerprint sensor is decently responsive and it worked 8 times out of 10. It can store up to 5 fingerprints at once.

There isn’t much that you can do with fingerprint sensor, except that swiping right to left or left to right on the home button slides out an edge bar with couple of apps similar to Samsung Galaxy S6 edge/ S7 edge. You can even customize apps in this by tapping on the top most icon of the row or by going to phone’s Settings > Advanced Settings > Edge Bar. 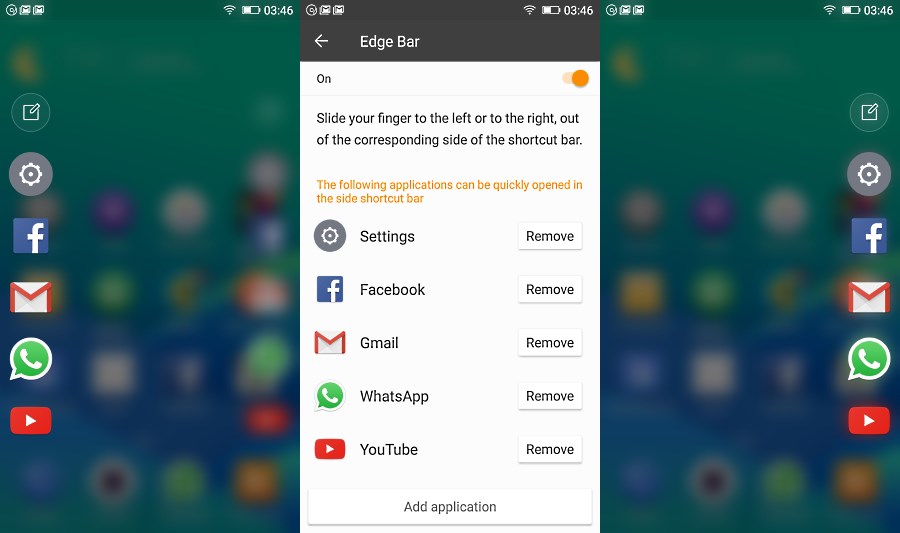 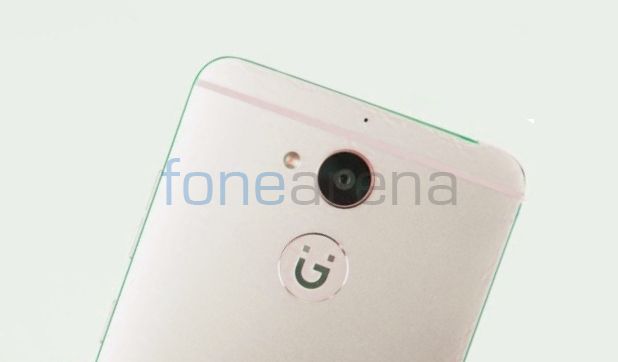 The images taken from the rear camera in daylight were mostly disappointing. Most shots were faded or inconsistent. The HDR mode images were slightly better in comparison though, but not good enough. The shutter speed is decent and tap-to-focus is little slow, but works great. Talking about the low-light performance, the shots taken were grainy and had too much noise.

There is not much to talk about Gionee’s stock camera app. It has mostly standard features, but some of the good ones include – GIF, Text Scan (scans text from an image and lets you edit), Smart Scan (QR code scan), and Pic Note (scans documents). 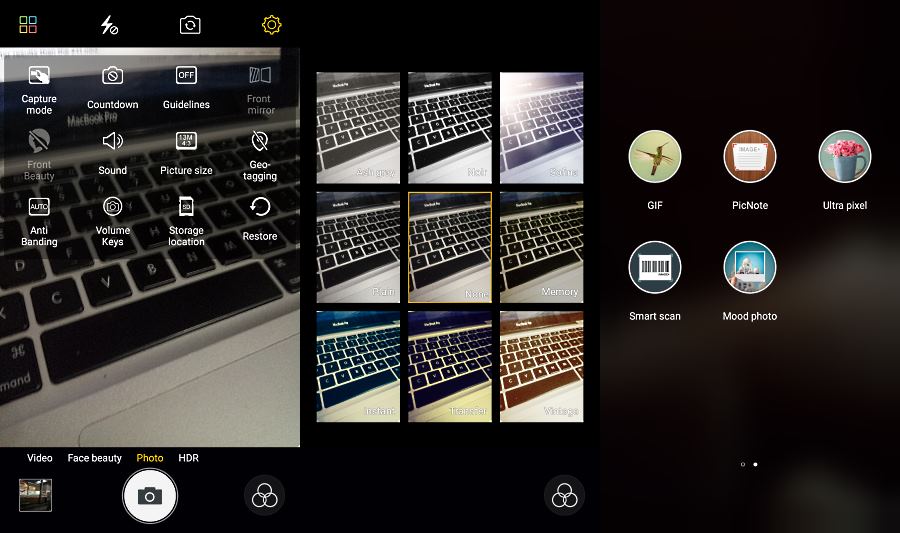 Overall considering the price range of S6 Pro, the camera is a big let down in this handset. 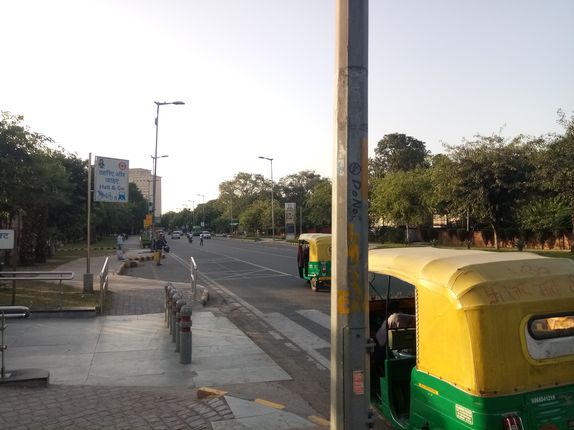 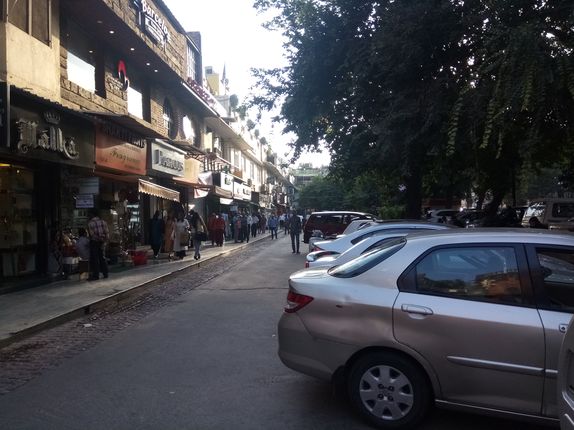 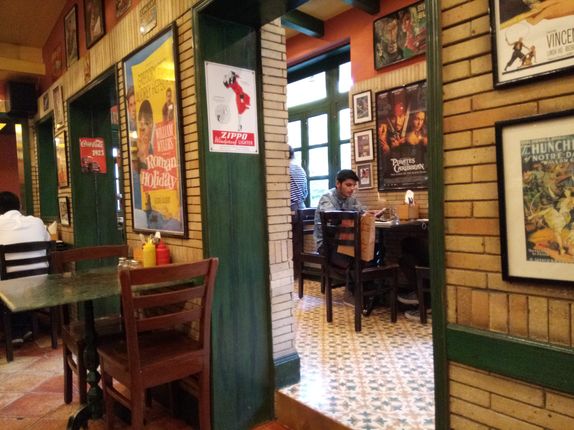 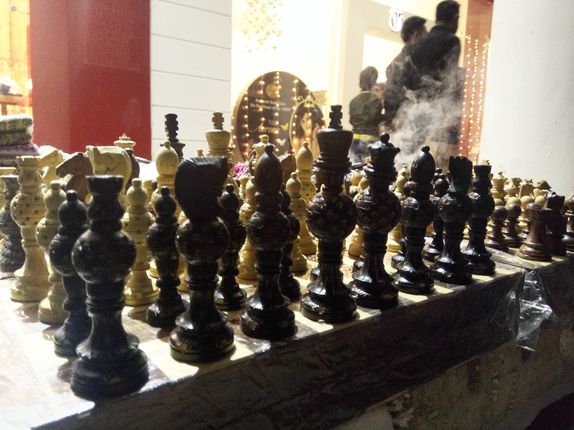 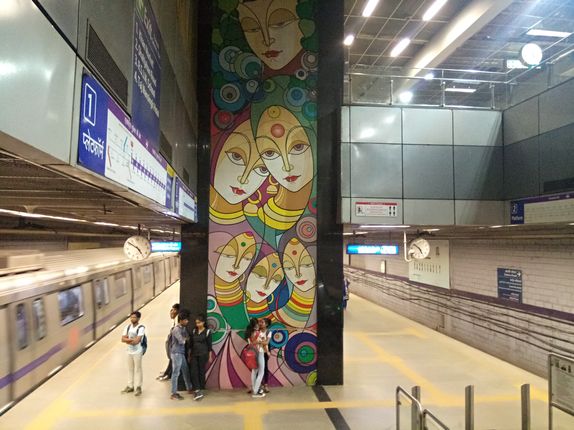 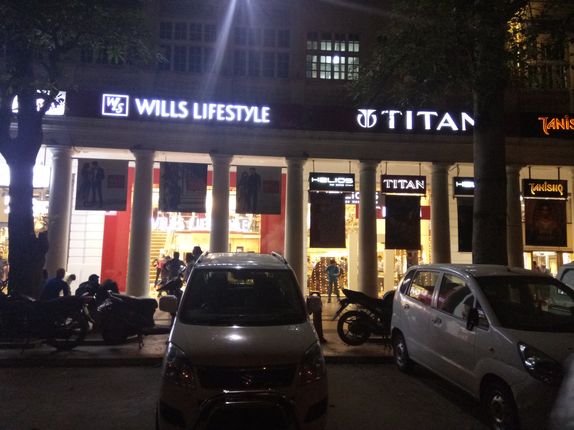 The Gionee S6 Pro is a hybrid dual-SIM 4G LTE device and it does support VoLTE out-of-the-box. The hybrid SIM tray sits on the left edge and it can either take two Nano-SIM cards or you can use one SIM and a microSD card. Other connectivity options are standard and includes WiFi 802.11 b/g/n/ac, Bluetooth 4.1 and GPS/ A-GPS. We faced major issue with Wi-Fi connectivity. The Wi-Fi chip appears to be of poor quality and it had really bad connection range.

The phone comes with 64GB of built-in storage, out-of-which most of the space is occupied because of excess bloatware and you get about 50GB of free space on first boot. The storage is expanded via microSD card (up to 128GB) and external storage can be optionally used as internal storage. The phone also supports Type C USB-OTG.

The S6 Pro packs a non-removable 3130mAh battery, which will last you about 8-9 hours on average usage with two SIM cards installed and 4G data. For heavy use case, the battery won’t go beyond 4 hours on a single charge, with of course 4G running and dual-SIM standby.

Overall, we feel that the Gionee S6 Pro is a highly overpriced smartphone considering the competition. It boasts of solid build and a great display. But the overall performance of the handset is average and the camera is really poor compared to the competition in the market right now. We faced major issue with the Wi-Fi connectivity and that’s not acceptable for a smartphone. 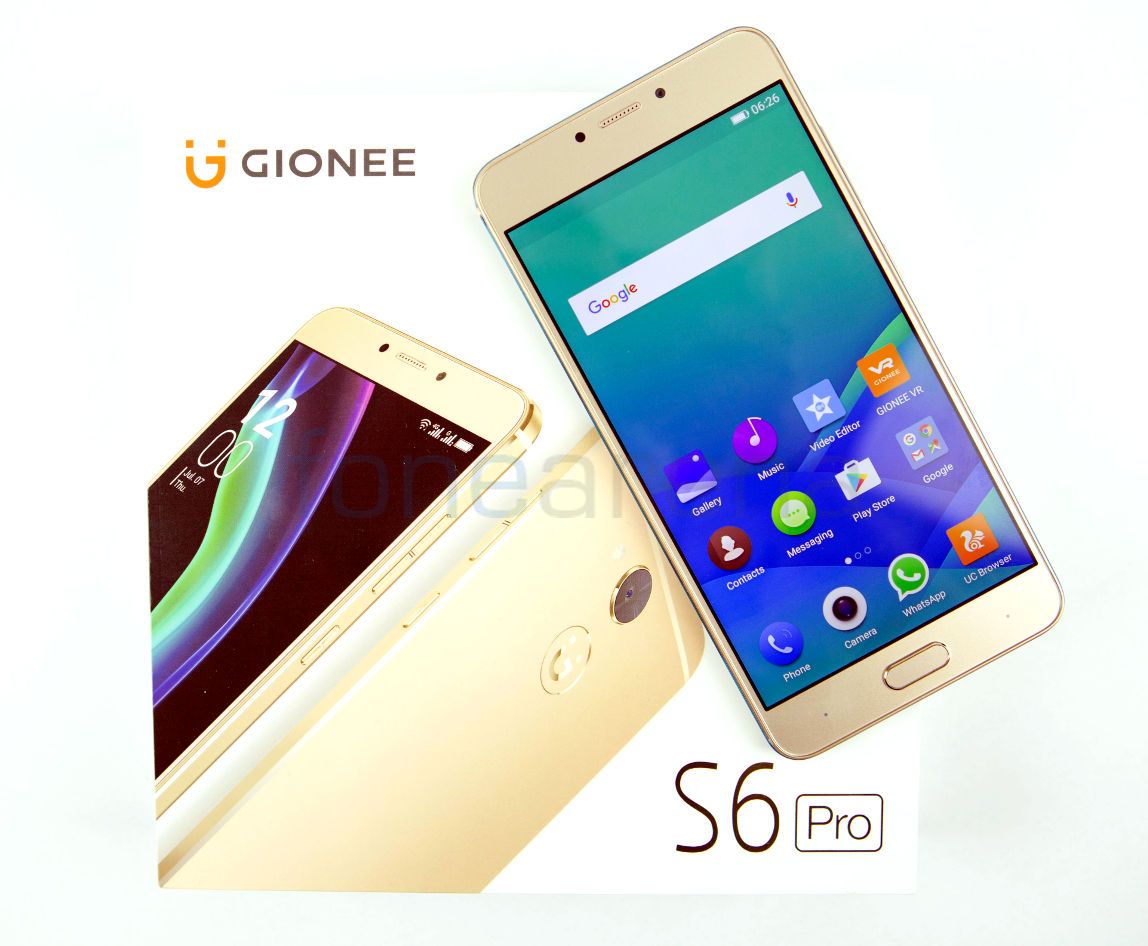