Motorola was a successful company that enjoyed peak sales with their RAZR series of phones. But the sales went downhill as they were not able to bring out anything new other than phones that were quite similar to the RAZR phones in design and functionality but in different form-factors.

Motorola desperately needed a new device to revive the company by boosting sales. The answer to their problems was the Motorola MILESTONE/ DROID. It was Motorola’s attempt to recreate the success they had with the RAZR phones and it did work. The Motorla DROID which was first introduced in the US and the Motorola MILESTONE which is the GSM Version of the same phone was released worldwide. Motorola has enjoyed record breaking sales of the DROID in USA and MILESTONE also has received great feedback. So the question remains is whether the Milestone with worth the money ? Lets find out

The Motorola MILESTONE comes in a compact box just like other phones available in the market as companies are looking to be as eco-friendly as possible thereby minimising the space and materials used for packaging.

The package contents include the basics and nothing beyond expectations. You will receive:

We will go in to detail about the various components supplied as we discuss them later on in their respective categories. 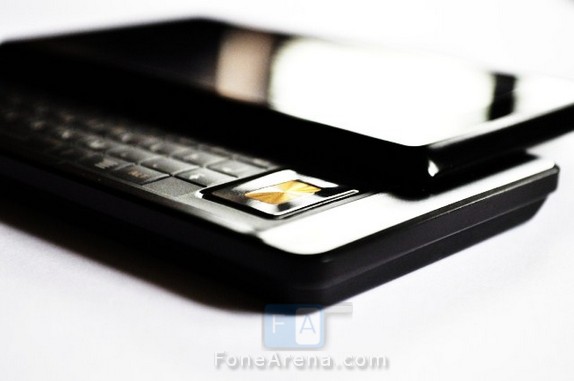 The design must be one of the key selling points of the Motorola MILESTONE since it is very unique and contemporary. Motorola chose to push the boundaries of design rather than stick to it. The phones measures at 115.8x60x13.7mm and weighs in at 165 grams. While the phone is quite big, we think it couldn’t have been any smaller considering the size of the screen and the QWERTY keyboard. We are actually very impressed by the thickness of the device as it is a QWERTY phone but still feels very thin.

The design is quite comfortable and all the elements are placed rightly as far as ergonomics is concerned. The phone is slim enough to fit into tight jeans as well. The build quality is excellent. There are no creaks or loose parts. The phone feels very good in the hand because of the metal parts used. It increases the weight but we feel the added weight gives the phones an original feeling.

The sliding mechanism is brilliant and there is no wobble to the slider. Each time you slide in/out, there is a satisfying click sound.

The MILESTONE is equipped with a large 3.7 inch capacitive touchscreen display with 480×854 pixels resolution and displaying upto 16 million colours. The screen is not the biggest available in the market as there are models with 4 inches and even 5 inch displays. But we feel that 3.7” is more than enough. Any bigger screen will make the phone too big to handle. 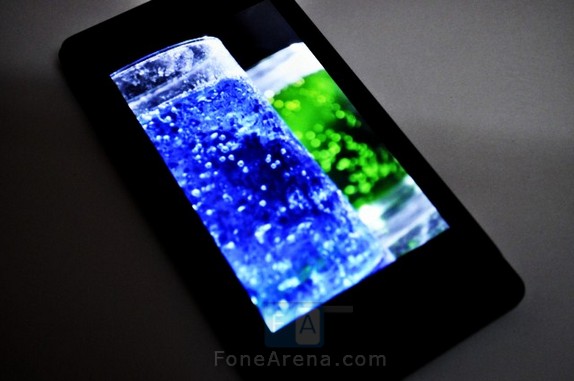 Multi-touch is supported, there is a proximity sensor that turns of the display during calls when kept next to the ear so as to save battery life and to avoid accidentally pressing the screen. The screen comes back to life once the phone is moved away from the ear. The built-in accelerometer allows auto-rotation of the screen from portrait to landscape and vice-versa by just tilting the phone.

The display performs very well indoors but the legibility under sunlight is not as good as we expected. It is certainly better than the AMOLED screens but still not the best. The Motorola MILESTONE is the first device running Android to run full 16 Million colours without colour banding as most other devices such as the XPERIA X10 are limited to 65k colours.

The sensitivity is excellent and we found no problem while using it. The faintest of touches are registered too and this is one of the main advantages over a resistive display. But because it is a capacitive display, you cannot use styluses, nails or gloves. But we are not complaining. We like it better this way.

The first keys that you will notice on the Motorola MILESTONE are the touch-sensitive keys below the screen. There are four of them- Back, Menu (Options), Home and Search. The keys also have Haptic feedback like the display so feedback from the buttons are good. 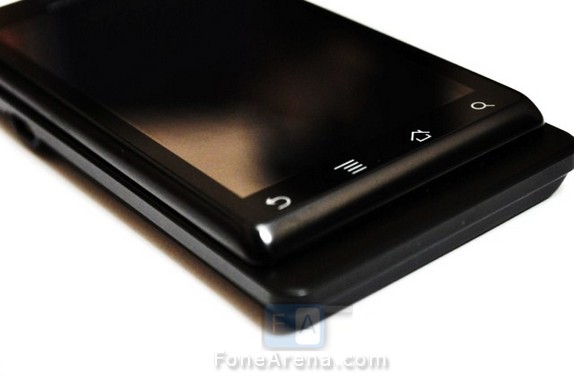 The right side of the device houses the volume up/down rocker key and the camera shutter key. The keys are nearly flush onto the design but still have easy access.  On the top of the device is the power key which also acts as the screen-lock key. 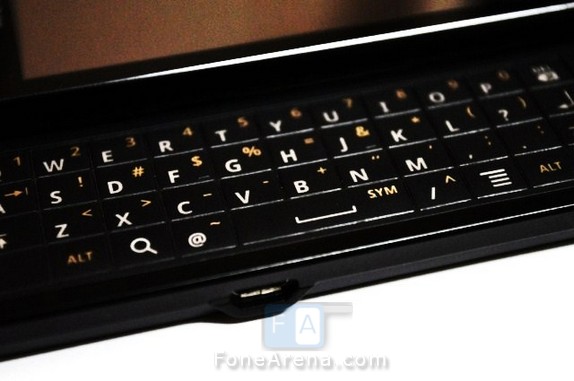 On opening the slide, the four row QWERTY keypad and the D-pad are revealed. The D-Pad is excellent even though the design is slightly different from the normal squarish d-pads. The keyboard has good feedback even though the keys are almost flat. One problem that we faced is that some of the keys are difficult to reach with your right hand because of the extra space below the upper sliding portion. But holding the device in a slightly different manner overcomes the problem.

As with most smartphones available today, the MILESTONE is equipped with every connectivity feature in the book. The vast connectivity options include GPRS, Wi-Fi, EDGE, 3G, HSDPA, micro-USB and Bluetooth 2.1. The micro-USB copying speeds are very fast and no lags were noticed even for large files.

There is 133MB of internal memory available and it can be expanded using micro-SD cards. There is support for cards upto 32GB. We had a 4GB micro-SD bundled in our package. Other regions may have different capacity cars in the sales package.

We were quite impressed by the audio quality of the Motorola MILESTONE. Although it does not belong to the top category of audio performers, it did better than we expected, both through the loudspeakers and headphones. There is very little distortion even at full volume. You can connect your own headphones without an adaptor using the 3.5mm audio jack. The 3.5mm audio jack is located on the top of the device next to the power button and the loudspeaker is located below the battery cover at the back. 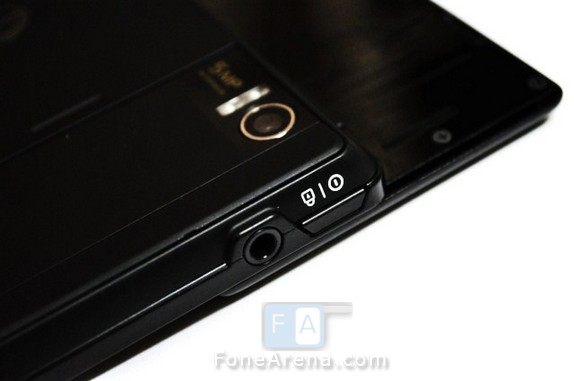 Both the audio jack and the loudspeaker are quite well placed. The music player is quite good but it can be improved. They could add equalizer presets and more visualizations. The audio formats supported include MP3, AAC, eAAC+, WAV and WMA9.

You can also stream your music to wireless Bluetooth headsets using the A2DP profile.

The MILESTONE has a large 3.7 inch Capacitive touchscreen with 480×854 pixels resolution capable of displaying upto 16 million colours. The disappointing fact however is that the MILESTONE is not able to take advantage of the beautiful screen. This is because of the very limited number of formats supported by it. The default video player supports MP4, 3GP and WMV9.

Popular formats such as DivX, XviD or MKV are not supported at all. This means you would have to convert most of your videos if you want to play it on your device. Conversion of videos takes a lot of time and thus causes inconvenience. This is one major issue we would like to be fixed in the video player. We are sure that the device will be able to perform exceptionally well given its brilliant screen and hardware.

The video player plays the supported video files just fine. Being a touchscreen phone it is easy to navigate through the video. The sound can be played through the loudspeaker, through the headphones or over Bluetooth to an A2DP compatible device. You can also play Youtube videos in High quality with the built-in app.

The MILESTONE has very good signal reception as well as sound quality. There are no disturbances but the sounds produced are a bit hollow. You don’t need the maximum volume to hear clearly in normal surroundings. Maximum volume may be required only in busy streets or around loud music etc.

You can use the on-screen keypad for dialing. There is no smart-dialing feature however and voice dialing is missing too. The call log shows the list of recent dialed, received and missed calls. The phonebook entries are practically unlimited. Each contact can be assigned various details such as different numbers, email ids, labels, ringtones etc. With Android 2.1 there is the option of quick contacts with which you can click on the picture assigned to a contact for fast and easy access to info. You can even add IM, addresses, notes, job titles and what not to your contacts.

As you may have guessed, messaging is a breeze on the Motorola MIELSTONE. Thanks to the QWERTY keyboard, you can send messages quickly with ease. The keyboard is very good but we still feel that it can be better as there are devices with better equipped keyboards. Not that you will make mistakes while typing but the speed of typing is restricted.

You can also use the onscreen keyboards for typing. It is also a full QWERTY keyboard and some of us liked it better than the hardware keyboard! 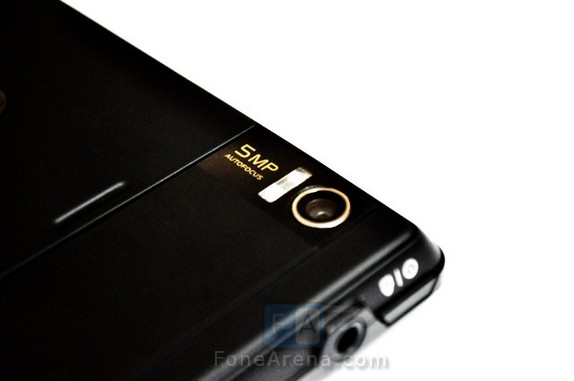 The Milestone packs a modest 5 MP Camera with Dual LED Flash , Automatic Focus , image stabilization and 4x digital zoom. While most Android phones don’t have a dedicated Camera key, the Milestone indeed has one and is a welcome addition. While the photos taken in day light are pretty good there is too much noise in low light conditions. The Camera app has a lot of settings you can tweak around with.The phone captures DVD quality video at 720×480 pixels resolution at 24fps and you can toggle between the image capture mode and camcorder mode. The phone runs on Android 2.1 Operating System. We could not see MotoBlur UI anywhere. The Android 2.1 update brought several improvements to the phone. Live Wallpapers are available and are super cool but take a toll on battery life. Multi-touch is supported. 9 Homescreen panels are available for customization.The device features MOTONAV turn-by-turn navigation but we could not test it. Since it’s an Android phone integration with all Google services is pretty good. Multi-tasking is supported and you can view all the open applications by long-pressing the home button.

The huge screen makes browsing pretty impressive and the QWERTY keyboard is pretty useful for keying in text. The browser is pretty much the stock Android one without Flash support. You can make use of pinch and zoom and double tap zoom gestures to interact with the page. Multiple windows can be opened. 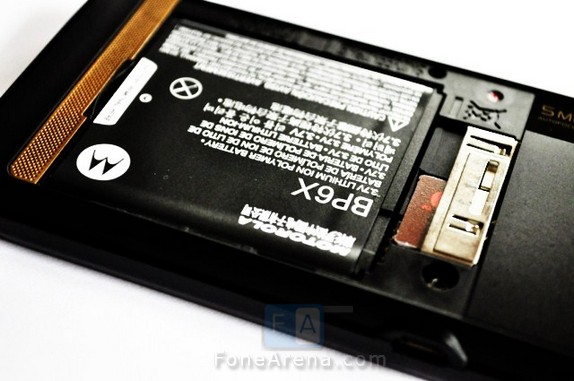 This might be one of the weak areas of the MILESTONE. While the company quotes a Stand-by time of 350 hours and 6.5 hours of talk time, the 1400mAh battery did not live up to expectations. We got maximum of one day of battery life with medium or slightly heavy usage. We think that this might also be a problem specific to our handset since a battery with such capacity should be able to do better. We were able to squeeze in a little more time out of the battery by changing the brightness to low.

We can’t deny that the Milestone is a great device. It has more pros than cons and we would certainly recommend the device if you are in the market for a Android phone. In fact it’s the best Android QWERTY phone today and no other handset has managed to oust the Milestone from this title for several months. We have asked some Milestone users if they were happy with the device and most are.We would give this device a score of 8/10 overall

Review by Sandeep Sarma and additional reporting by Varun Krish