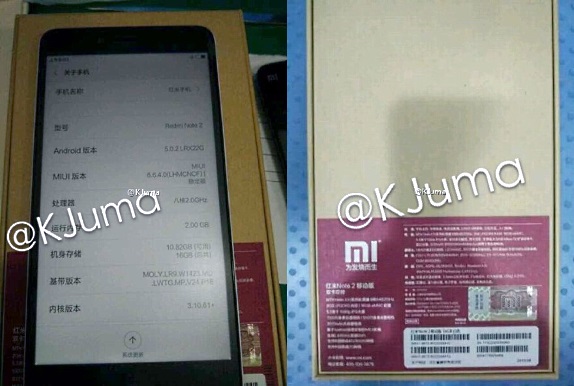 Xiaomi’s much-anticipated Redmi Note 2 has been leaked online in purported images of the handset and the retail box. Company is expected to announce the smartphone this week on Thursday on August 13th, alongside the new MIUI 7.

While we have already seen many image leaks for the alleged Redmi Note 2 tipping its overall design, the fresh image leak from Chinese tipster @KJuma (via Mobipicker) only reveals the front of the handset sitting on its retail box. Also, the ‘About phone’ section seen in the image suggests that the Redmi 2 Note will be backed by MediaTek’s latest octa-core Helio X10 SoC clocked at 2.0GHz and coupled with 2GB of RAM.

Last month, the handset had got listed by the Chinese certification authority TENAA, carrying a MediaTek MT6795 processor. But there are also rumours that the company will make two variants of the Redmi Note 2, and the other one will be powered by Snapdragon 615 SoC. The phone is likely to come in black, white, red, orange, yellow and green colours too.