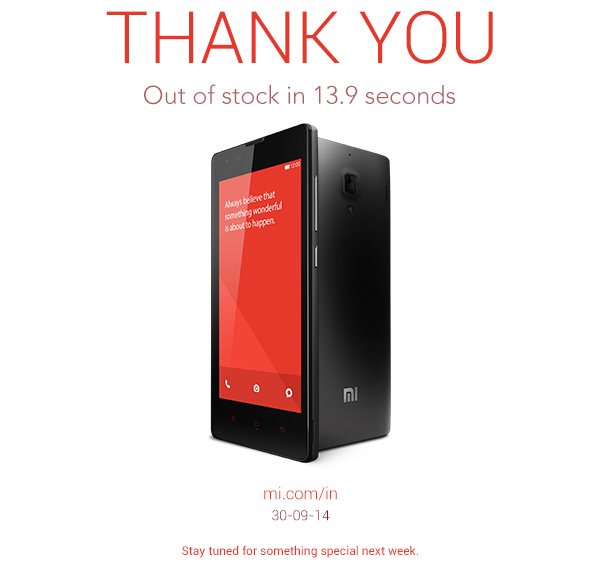 Xiaomi has sold 60,000 units of Remi 1S smartphones in 13.9 seconds in the fifth flash sale in India today. The fifth sale took more time compared to previous Redmi 1S sales. The company has announced that the next flash sale for the Redmi 1S would happen only on October 14th, and not on October 7th. It has asked the fans to Stay tuned for something special next week, October 7th.

Totally the company has sold about 2.4 lakh Redmi 1S smartphones in India till the fifth sale. The smartphone is still in demand and sees lakhs of registrations every week. Xiaomi recently announced that Mi 3 that was temporarily discontinued in India, would be back on sale during diwali. It would to sell 100,000 smartphones in a week during Diwali.

The company would start registrations for the 14th October sale at 6PM today. As usual, registration is compulsory, even if you had already registered for previous sales. Will it bring back the Mi 3 or begin the Redmi Note sales next week? Hope Xiaomi would reveal it soon.