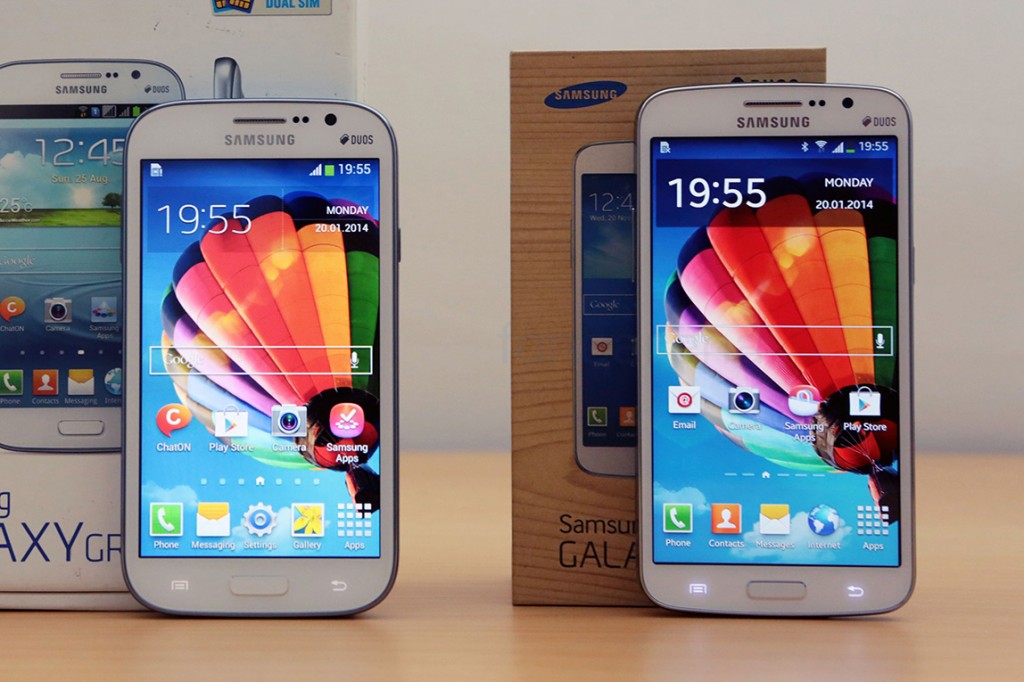 We just unboxed the newly launched Samsung Galaxy Grand 2 and showed you a photo tour of the same, but the single immediate question that arises in everyone’s minds when looking at a successor of a hit device is, how better is it than the original? The Grand 2 gets an updated spec sheet, with obvious improvements in the display and the processor department, but there is always more to it than the spec sheet, right? So, how much of an upgrade is the Grand 2 over the Samsung Galaxy Grand Duos? We find out in a hands on comparison video, exploring all the possible differences – 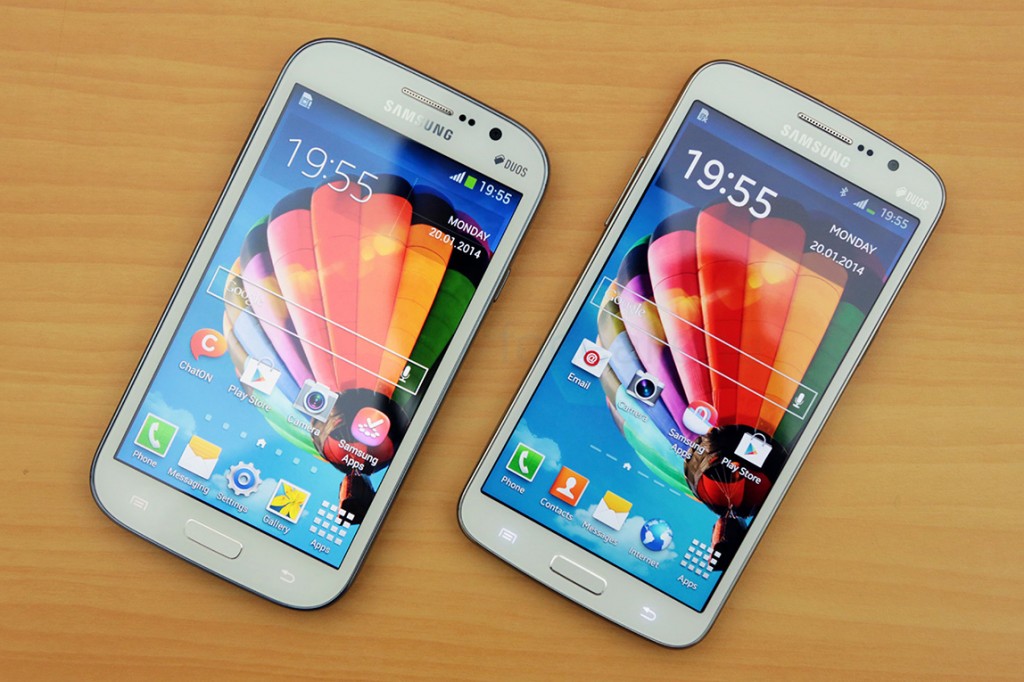 Well, because they are. Both are very much part of the Galaxy range in terms of design, as the hardware home button, the placement of the buttons and the false chrome sides are clearly the design philosophy Samsung goes with. But when it comes to build quality, the Grand 2 packs the faux leather matte back cover for a premium look and feel. 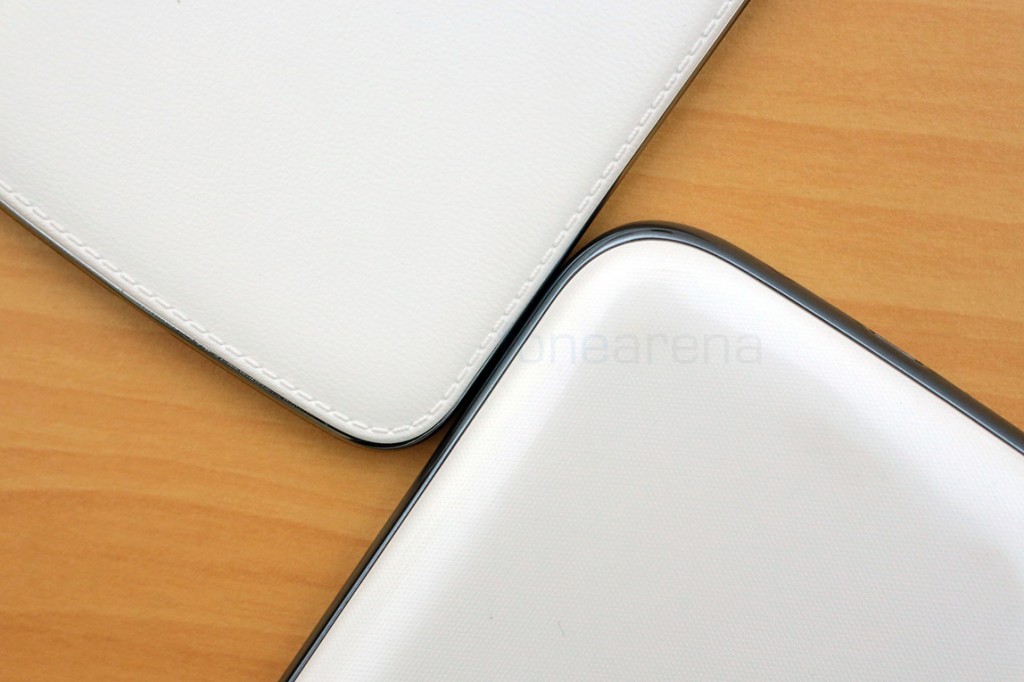 The faux leather back is not of the same calibre as the Note 3, but it is still way better than the easily scratch-able glossy plastic back that the original grand had. We’d rate the Grand 2 better here, on build quality, a much needed upgrade, and at the same time, refreshing. Another important distinction is the bezel 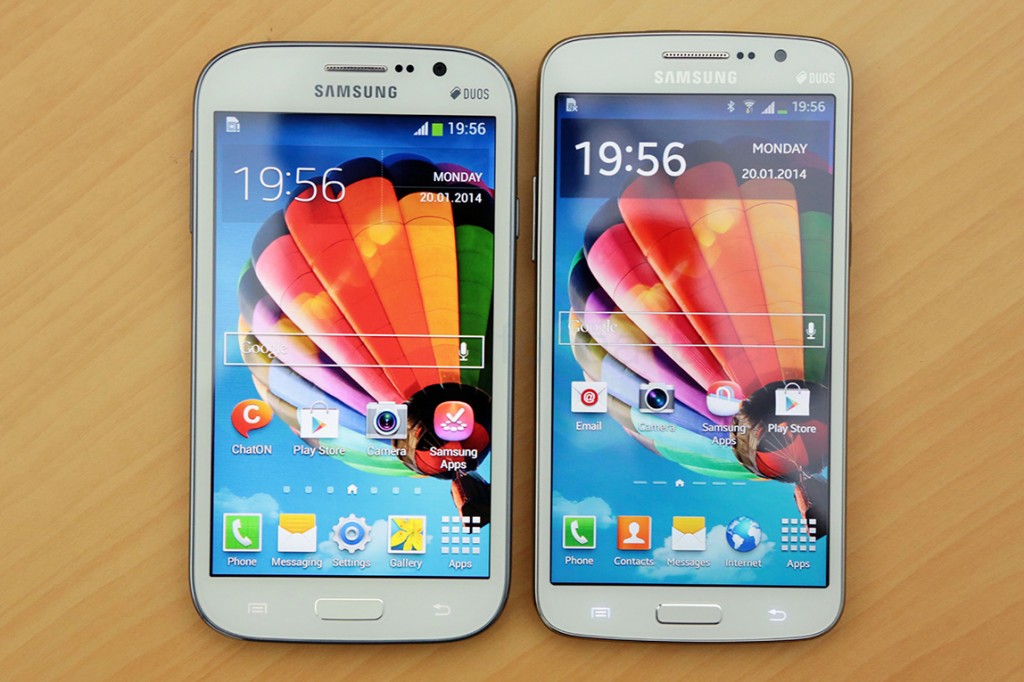 The bezels on the Grand 2 are thankfully a lot slimmer than the Grand Duos. This is a lot like the S3 to S4 upgrade, where Samsung thinned down the bezel to perfectly fit a larger display in a similar frame. Talking of the frame, lets see what the dimensions are like – 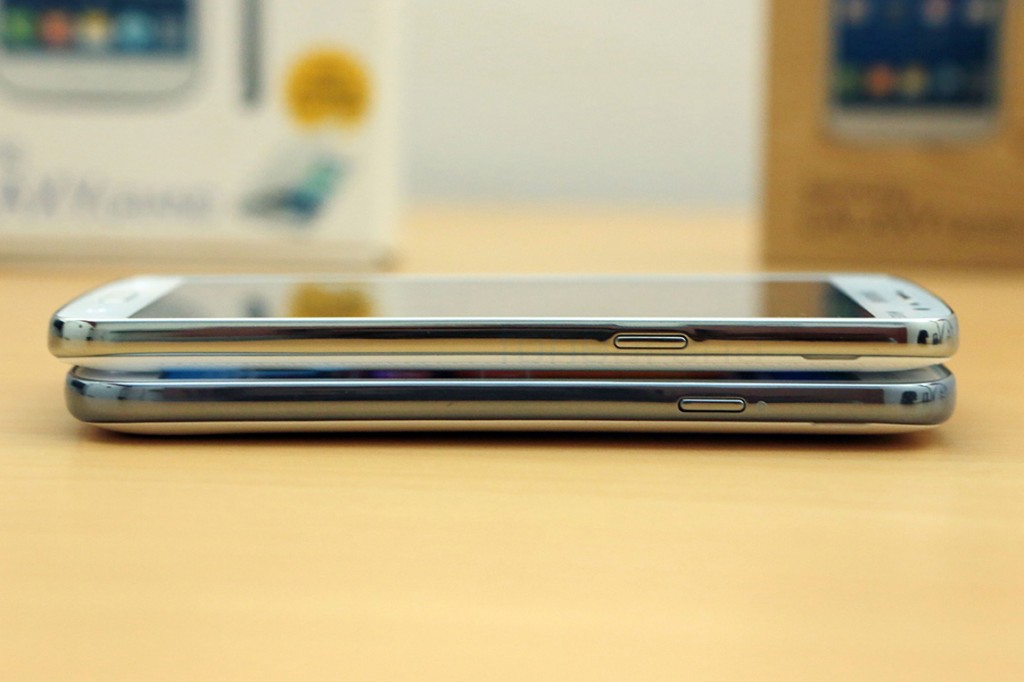 While you cannot immediately feel the change in thickness when the devices are handled individually, it does make a striking difference upon closer inspection. The Grand 2 is 0.7mm thinner than the Grand Duos while weighing almost exactly the same, in fact 1g higher. That doesn’t make any difference though. The Grand 2 is also a little bit taller, mainly due to the narrower 16:9 display as opposed to the older 15:9 WVGA screen. One small difference we noted in terms of hardware though is the placement of the mics. 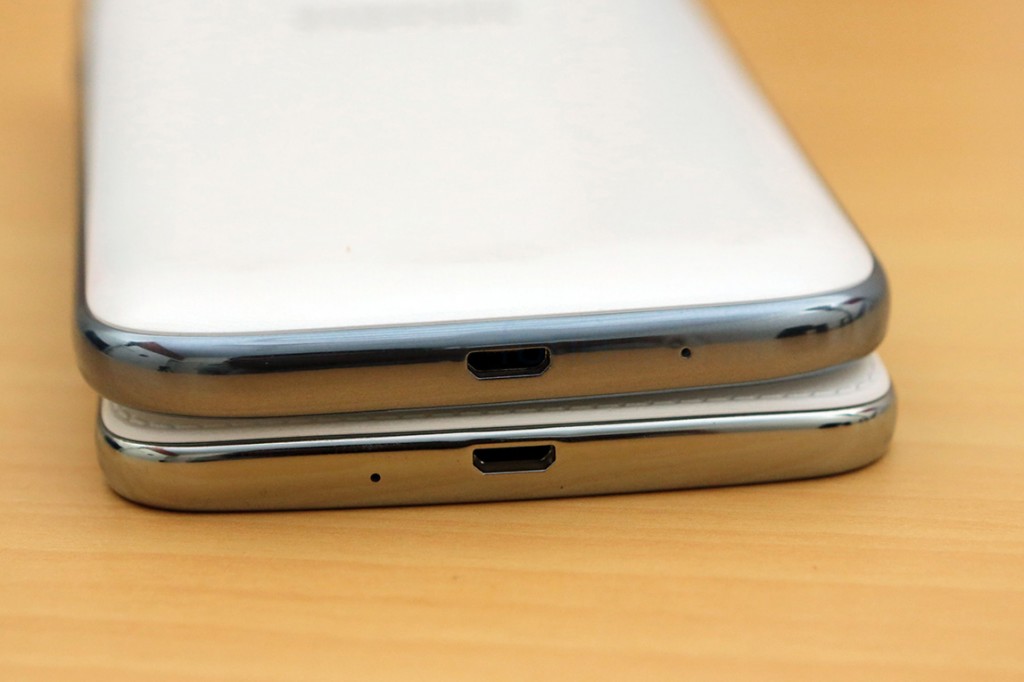 Not that it really matters, but it was just an observation from otherwise two highly similar devices. But a highly dissimilar hardware component is the display – 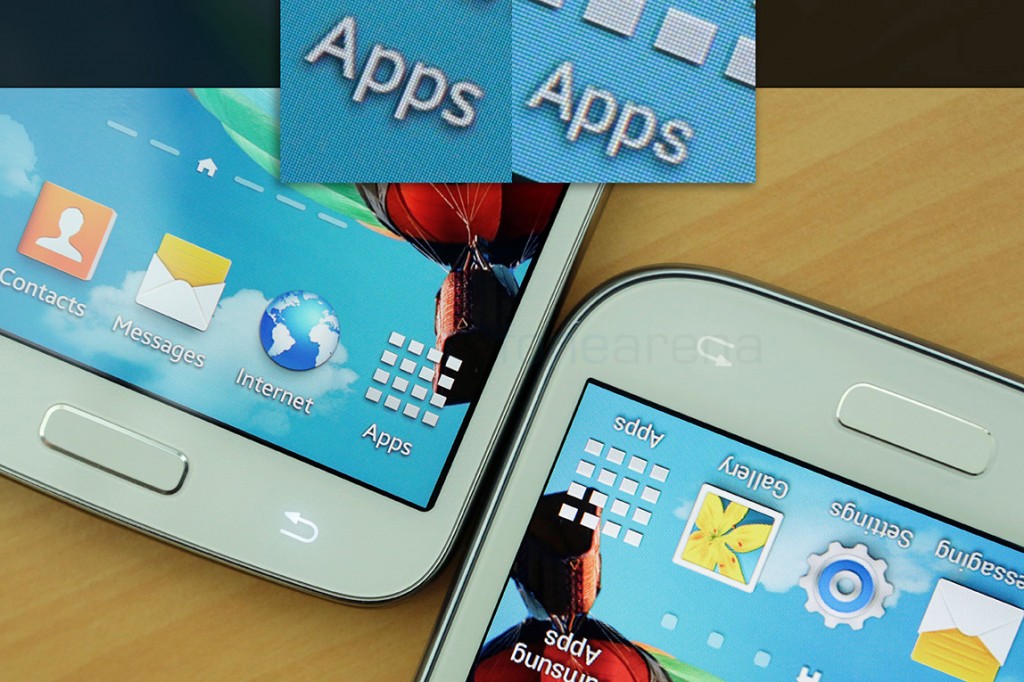 The Galaxy Grand Duos had a 5″ WVGA screen at 187 ppi while the Grand 2 sports a 5.25″ screen with 720p resolution at 280 ppi. This is a much needed upgrade because the Grand Duos was totally let down by the display, especially at that price. You can clearly see the differences between the two displays in the screenshot above. The Grand’s screen is totally washed out and pixelated while the Grand 2’s screen is crisp, has better colors and definition overall. A big upgrade, and this time, makes the pricing more sensible. We also noted that the bigger display is properly optimized largely thanks to the resolution – The OS had smaller icons and more room for features like multi window. More on software later. 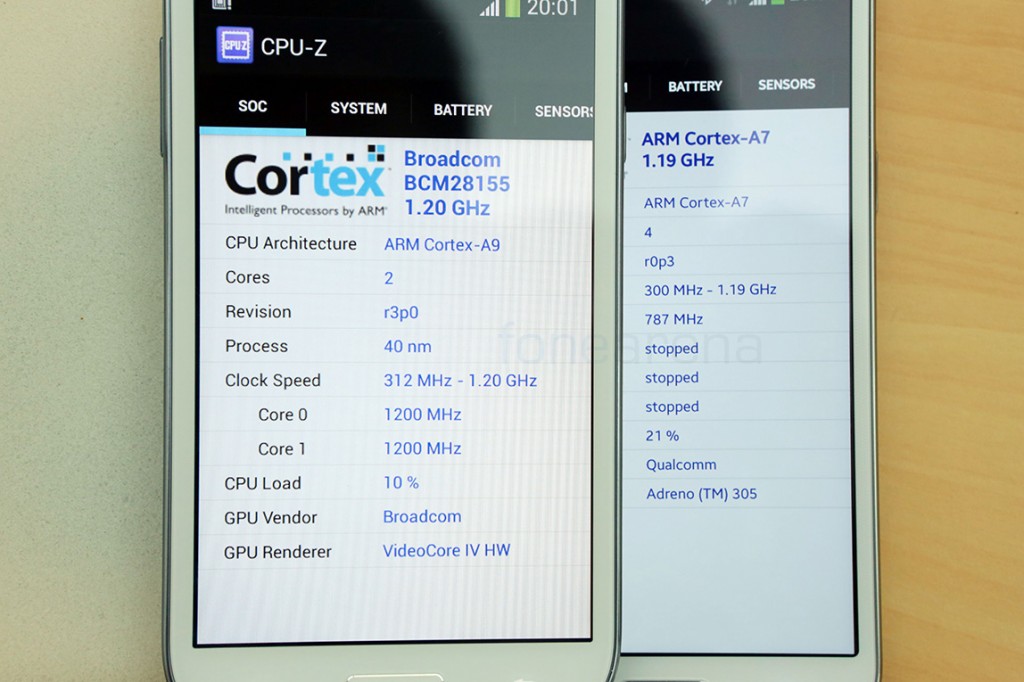 Coming to internals, the Grand 2 provides a different set of hardware when compared to the Grand Duos. The original was powered by the Broadcom BCM28155 chipset, a cortex A9 based 1.2 GHz Dual Core CPU, accompanied by the Videocore 4 GPU. The successor is now powered by the Snapdragon 400 MSM8226 – a Cortex A7 based 1.2 GHz Quad Core processor that has the Adreno 305 for graphics duties. In our limited testing time, we found the Grand 2 to slightly less laggier during a background task than the Grand Duos, otherwise the UI performance remained almost the same. But that might actually be due to the amount of RAM on both the devices – 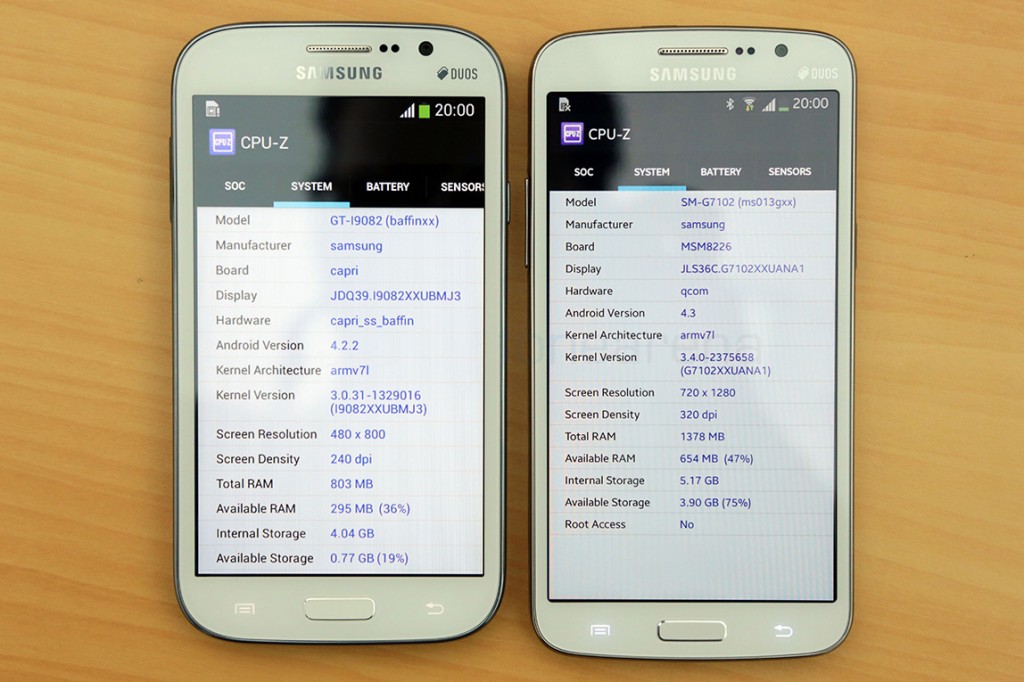 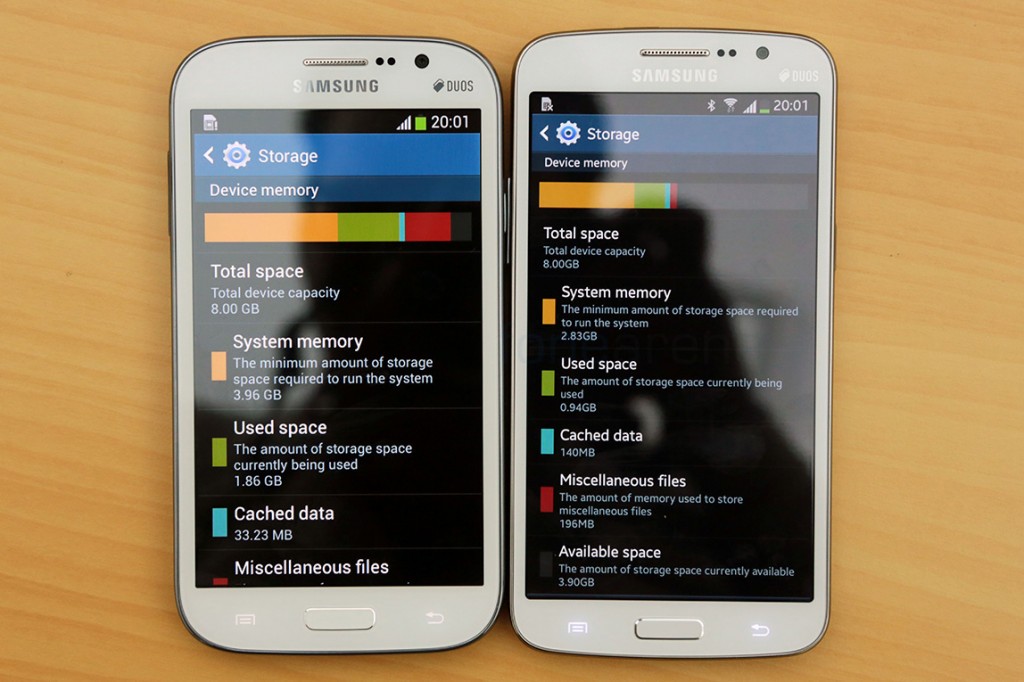 Storage wise, we found that the Grand 2 had more to work with than what the Grand offered, especially in terms of system memory. The Grand Duos used up nearly 4GB of precious internal memory while the Grand 2 uses only 2.83 GB. We get more than 1 GB for user memory, which is great in our opinion. 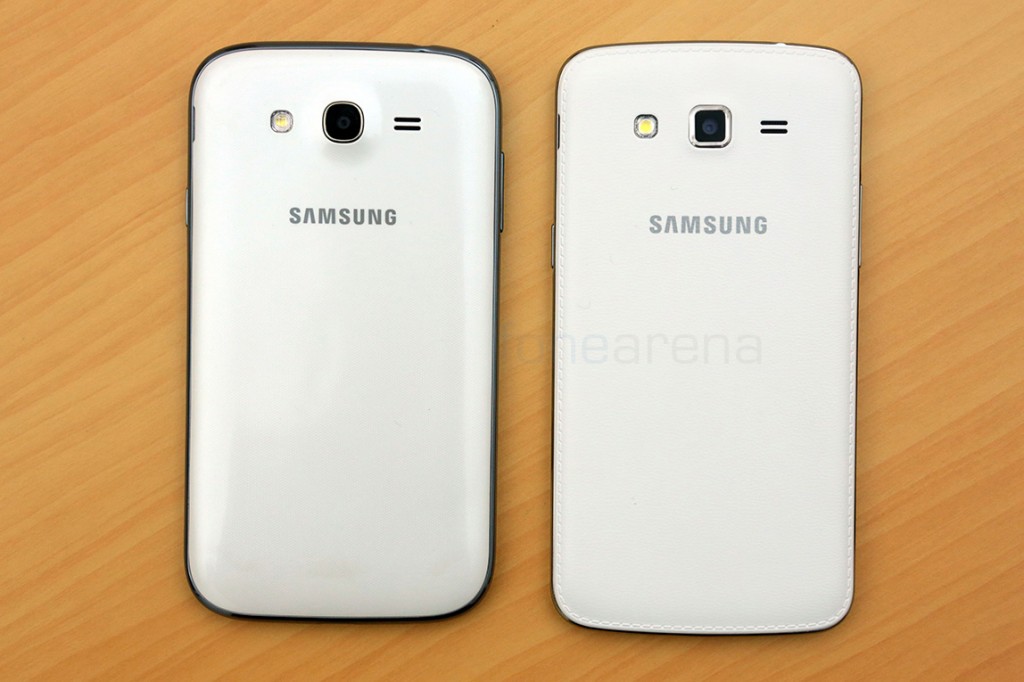 Coming to the camera, we were surprised to find that both the phones have the same 8 MP unit capable of 1080p recording and a 1.9 MP Front facing camera. We will be doing a camera comparison to let you know how different they are, but for now, we just found that the UI on the Grand 2 is newer and more in line with the latest version we see on other Samsung devices. This mainly depends on the system software – 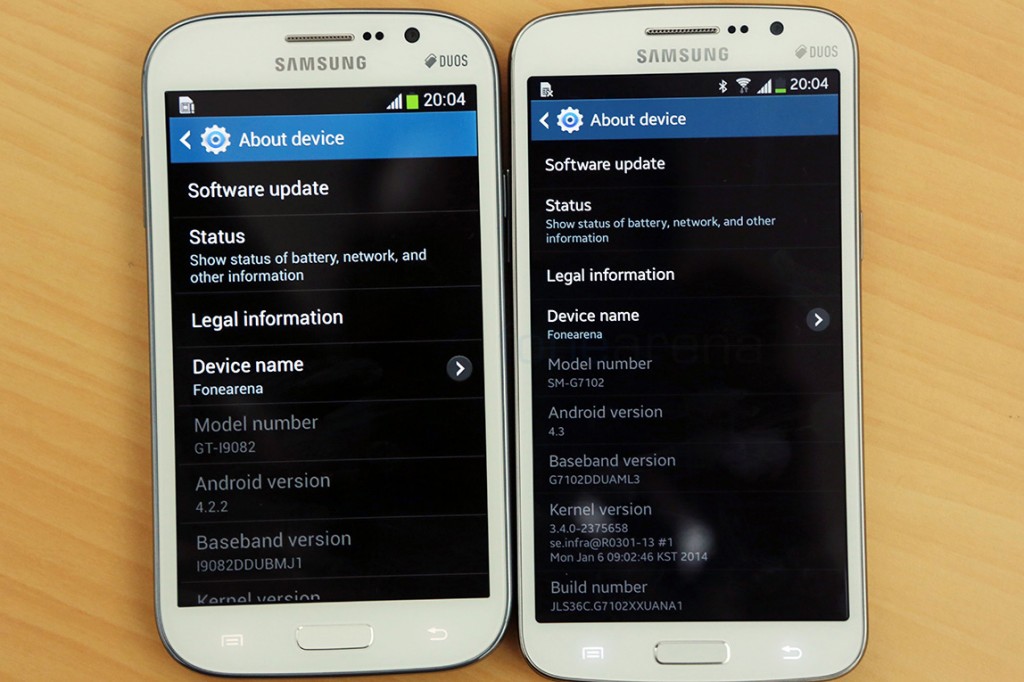 The Galaxy Grand Duos launched with 4.1.2 JellyBean out of the box but has since been upgraded to 4.2.2, but the Grand 2, in typical Samsung fashion, comes with 4.3 out of the box, and we expect it to get the 4.4 update with the purportedly new Magazine UX to boot. The Grand 2 is definitely up for at least one update, that is for sure. 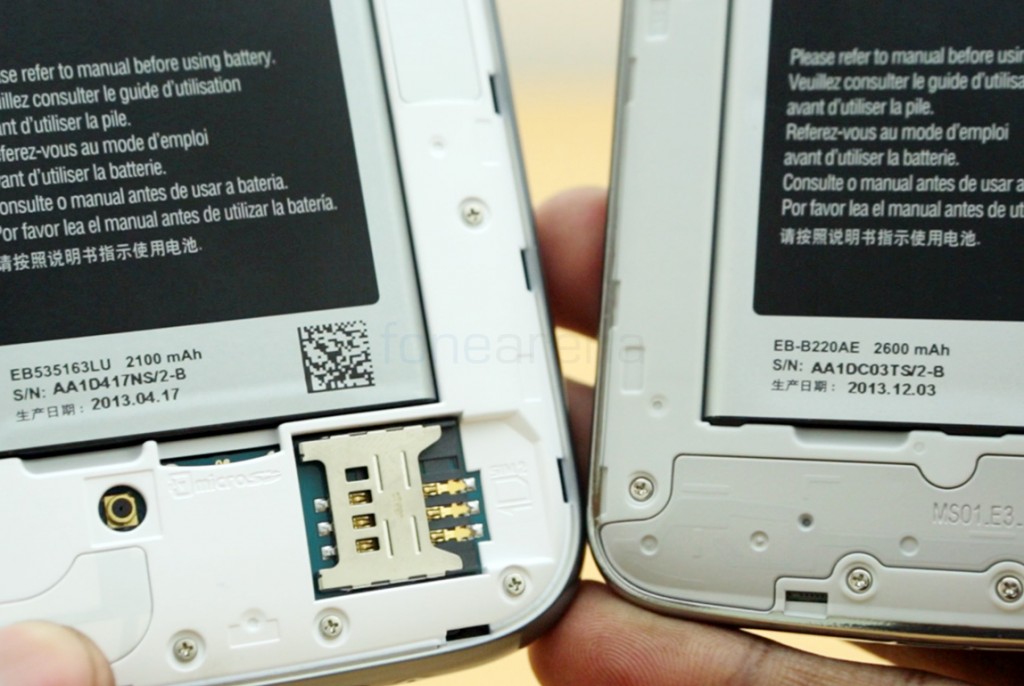 More on the hardware department, we also found the two Grands to pack different batteries inside. The Grand Duos had a 2100 mAH battery while the Grand 2 has a 2600 mAH unit. While that might look as an addition to combat the stress of a higher resolution screen and a quad core processor, we are thinking that it would be enough to extract more juice out of the dual SIM device. 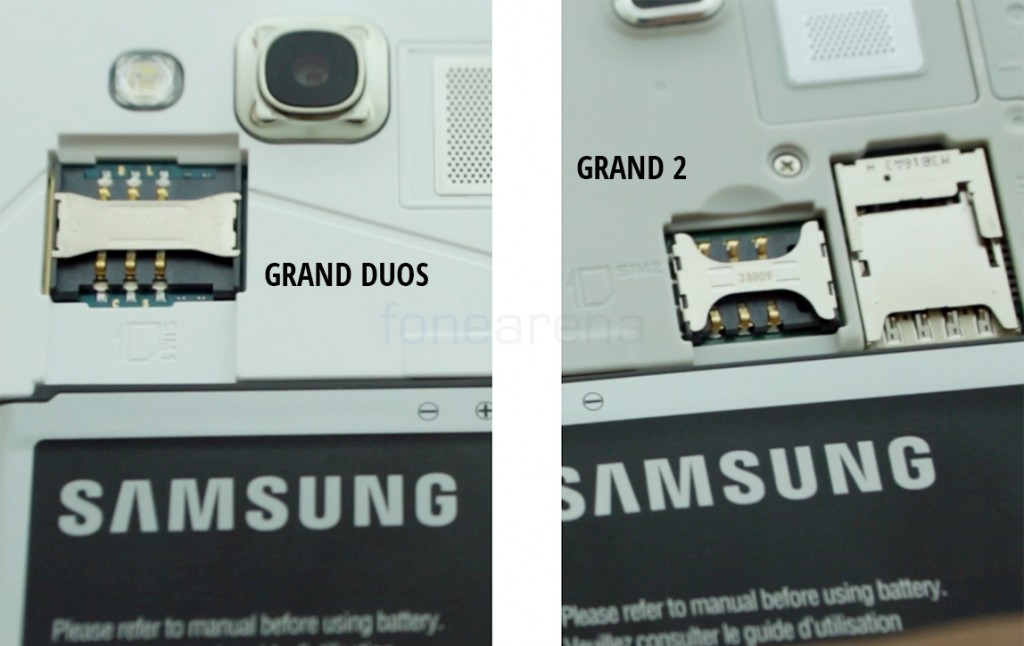 Oh, and at the mention of Dual SIM, we found that the major difference in connectivity between the two is that the Grand 2 has micro SIM slots while the Grand Duos had normal SIM card slots. That said, both are “Duos” branded, and have the smart dual SIM feature that works with certain operators for call forwarding between the two SIMs. 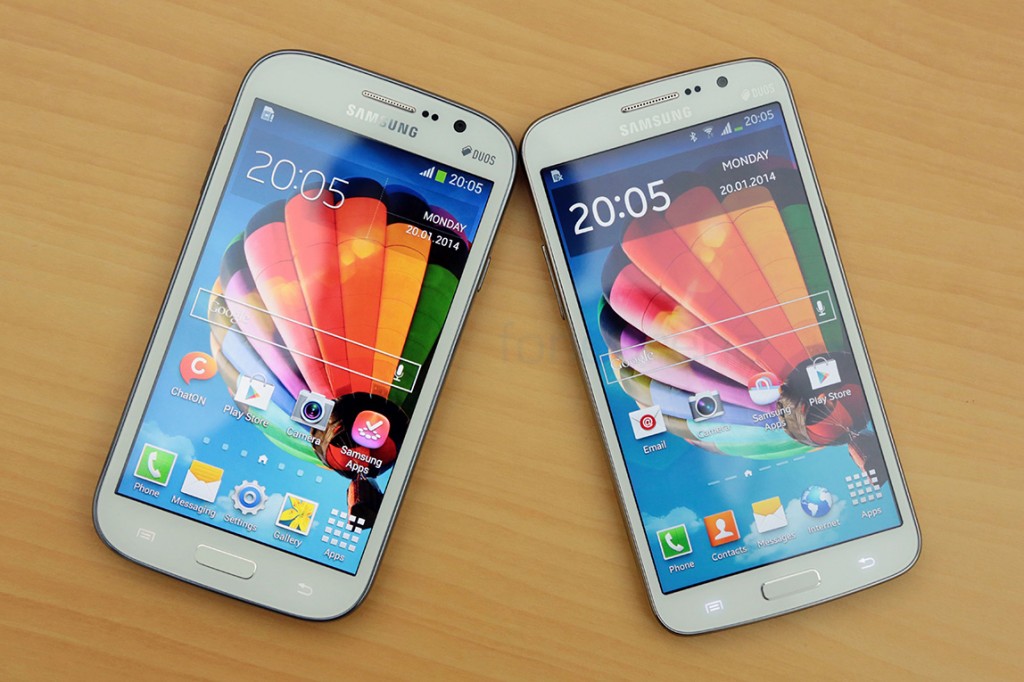 And that brings us to the conclusion of this hands on comparison between the Galaxy Grand Duos and the Galaxy Grand 2, the much awaited successor with plenty of upgrades that make more sense for the price of Rs. 22,990. We will be bringing you a lot more on the device though, like benchmarks, camera samples, gaming videos and more, so stay tuned to the blog and our YouTube channel for more on the Galaxy Grand 2 and look for the review in the coming weeks. Cheers, and let us know what you think in the comments section below.