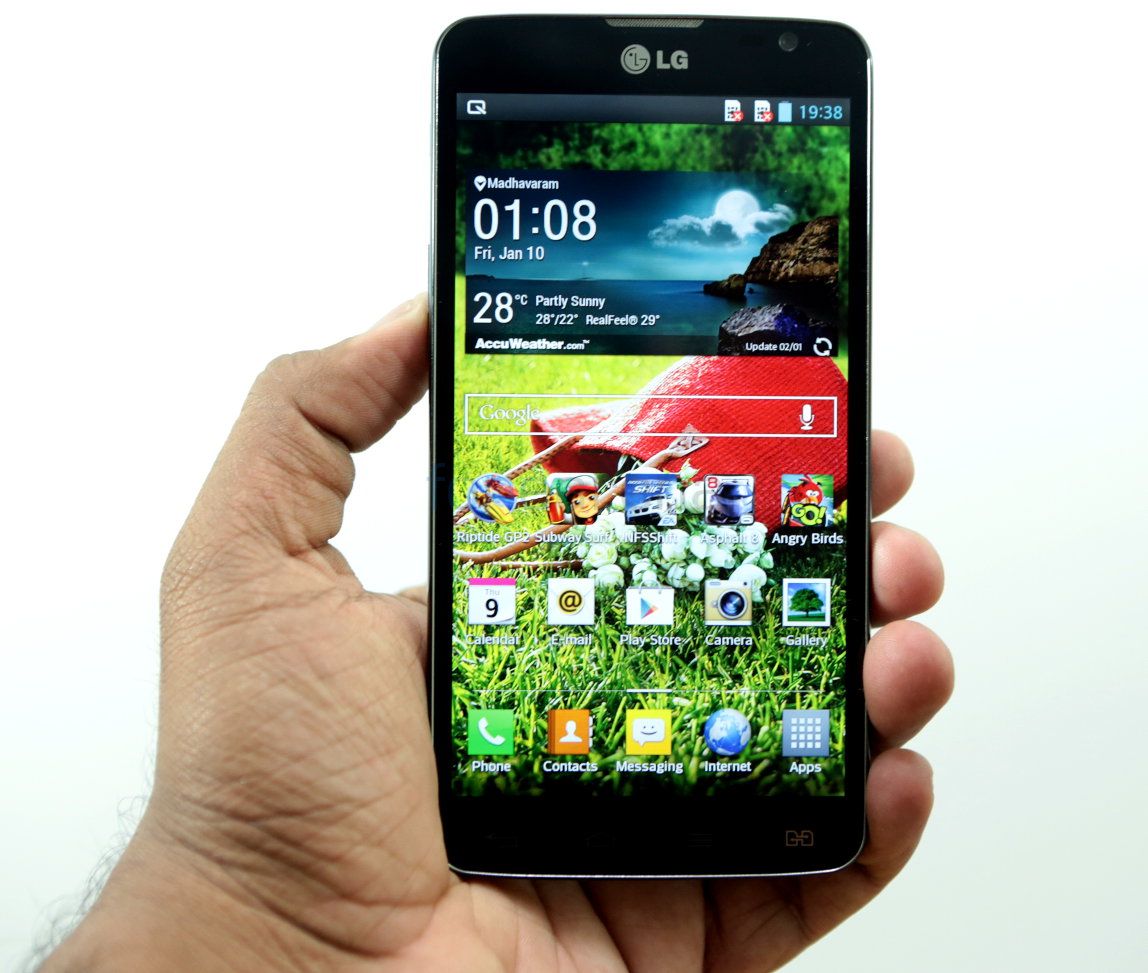 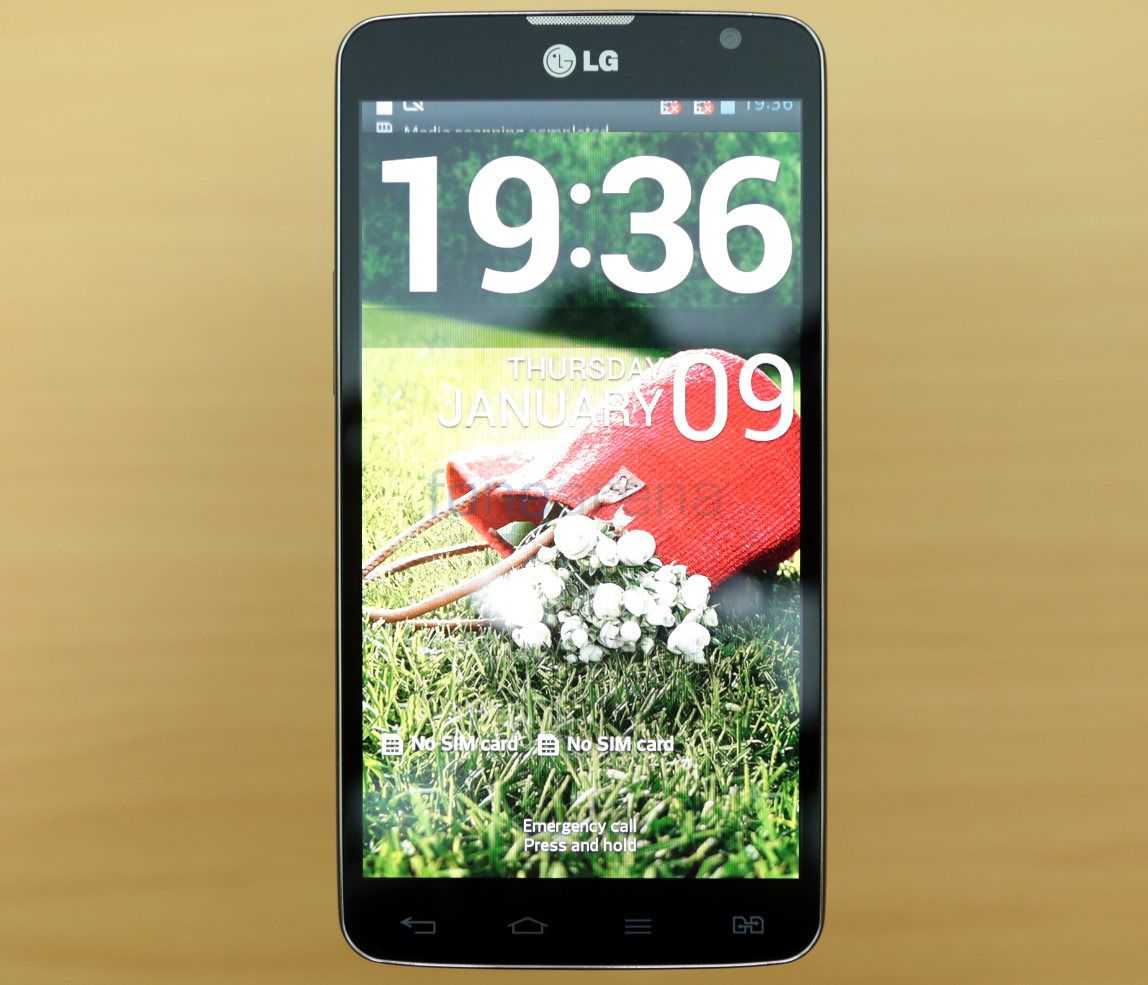 The 5.5-inch IPS display at a resolution of 960 by 540 has a pixel density of just 200 PPI. The display is definitely not impressive and the colors are not vibrant. The sunlight legibility too is poor. Since the phone lacks an ambient light sensor, you have to adjust the brightness manually while viewing videos. The screen is glossy and is fingerprint magnet. 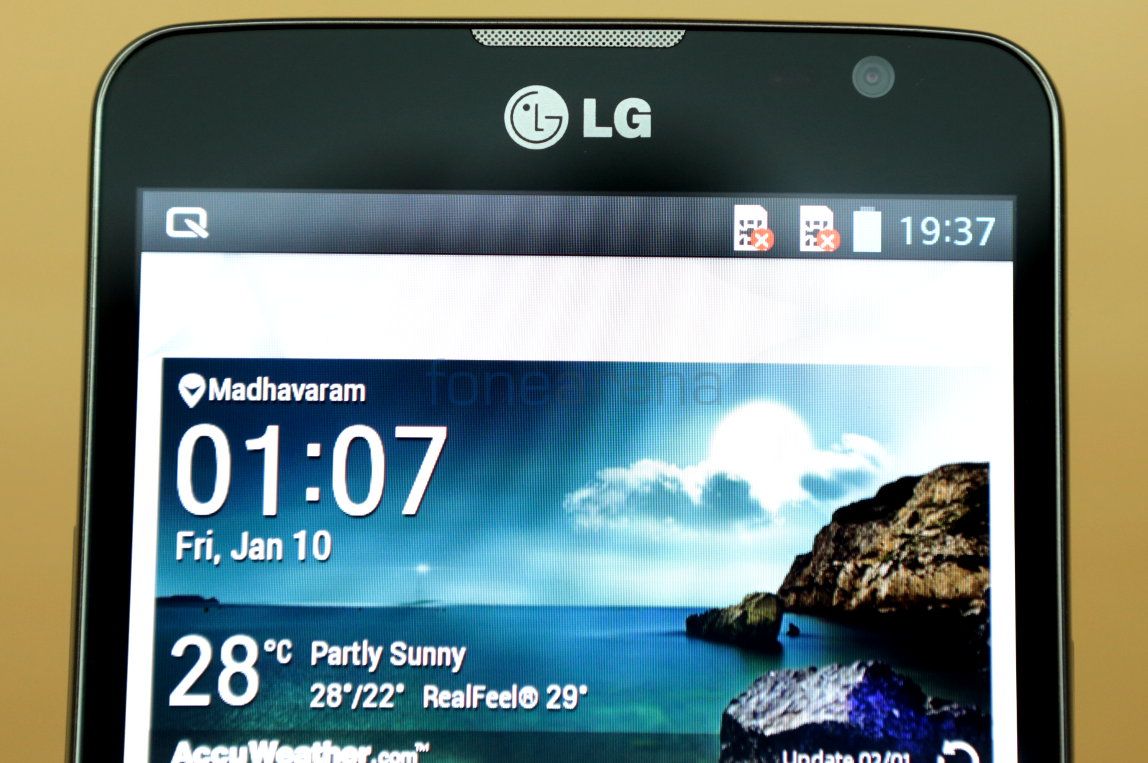 On the top you have an earpiece. Since this is present on the top edge, you’ll need some time to get used to it. On the right there is a 0.3-megapixel (VGA) camera. Next to it is the Proximity sensor. It doesn’t have an ambient light sensor, which is disappointing. 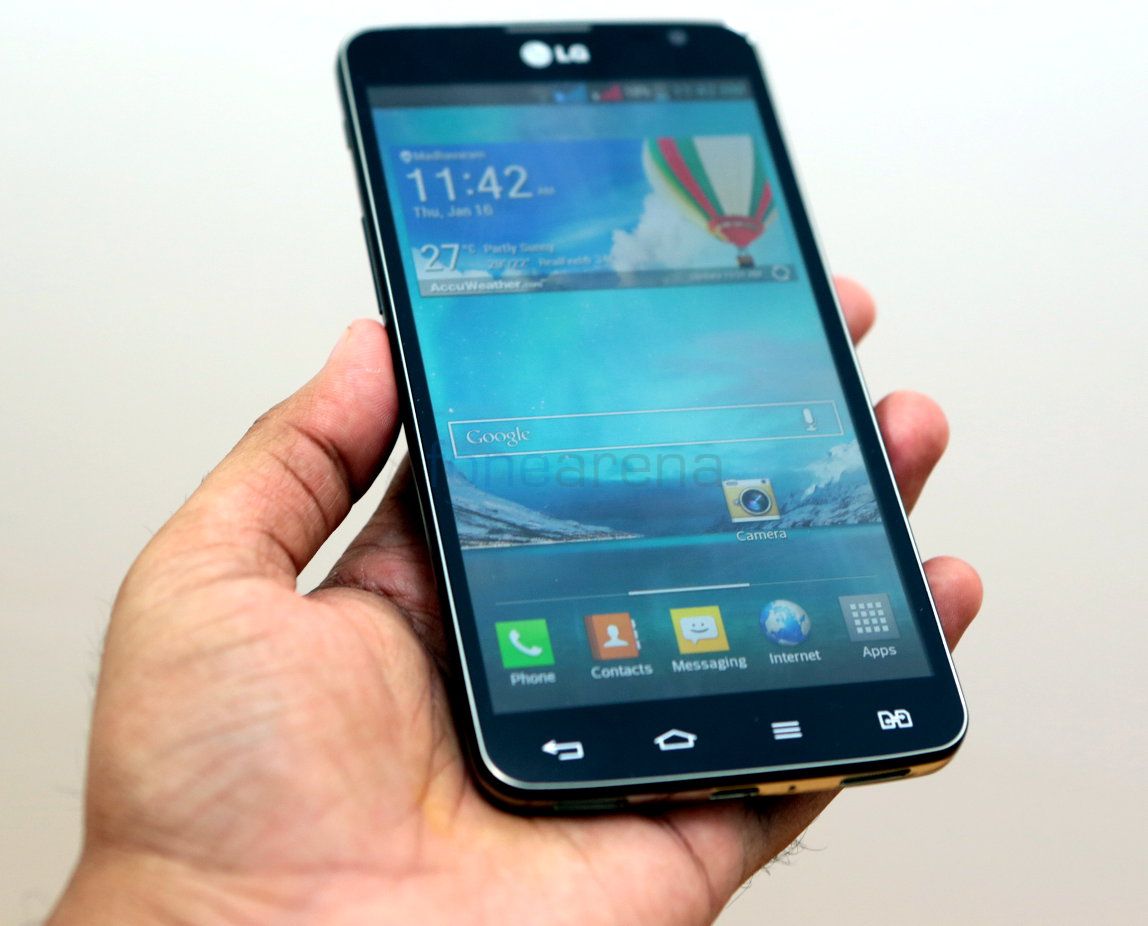 There are capacitive touch buttons for back, home, menu and dedicated SIM switching, below the display. These are not backlit and don’t offer haptic feedback when pressed. Even though the bezel is small, it is hard to reach the capacitive touch buttons on either corners for one-handed usage. If you have small hands, you hit the home key often when you try to reach the back button. 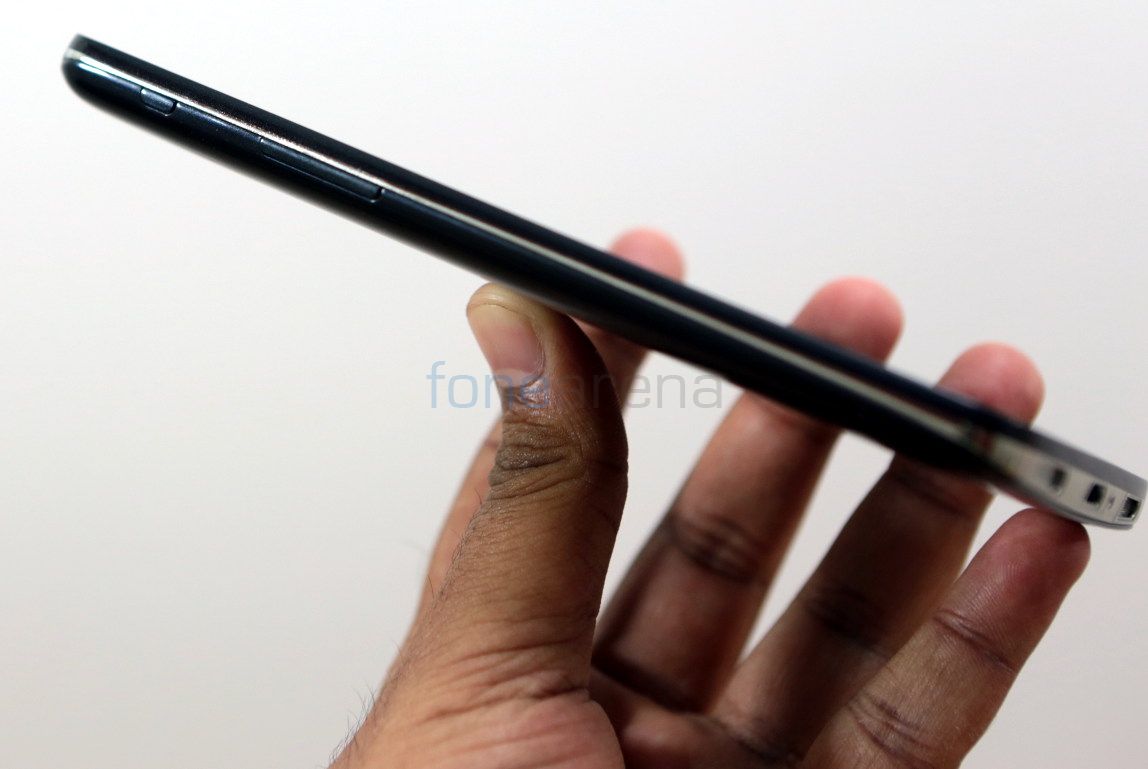 The phone is 9.48mm thick and weighs 161 grams, which is decent for a phone with a 5.5-inch screen. The Huawei Ascend Mate that we reviewed last year was 198 grams. You have the QuickButton on the left side, on the top. Below that you have volume rockers.

On the right side there is a power button. You have a chrome strip running on the sides. This is shiny and is prone to fingerprints and scratches.

On the top there is a 3.5mm audio jack, an IR blaster and a secondary microphone. You can also see the slot for the stylus.

On the bottom there are dual speakers, a micro USB slot and a tiny microphone hole. 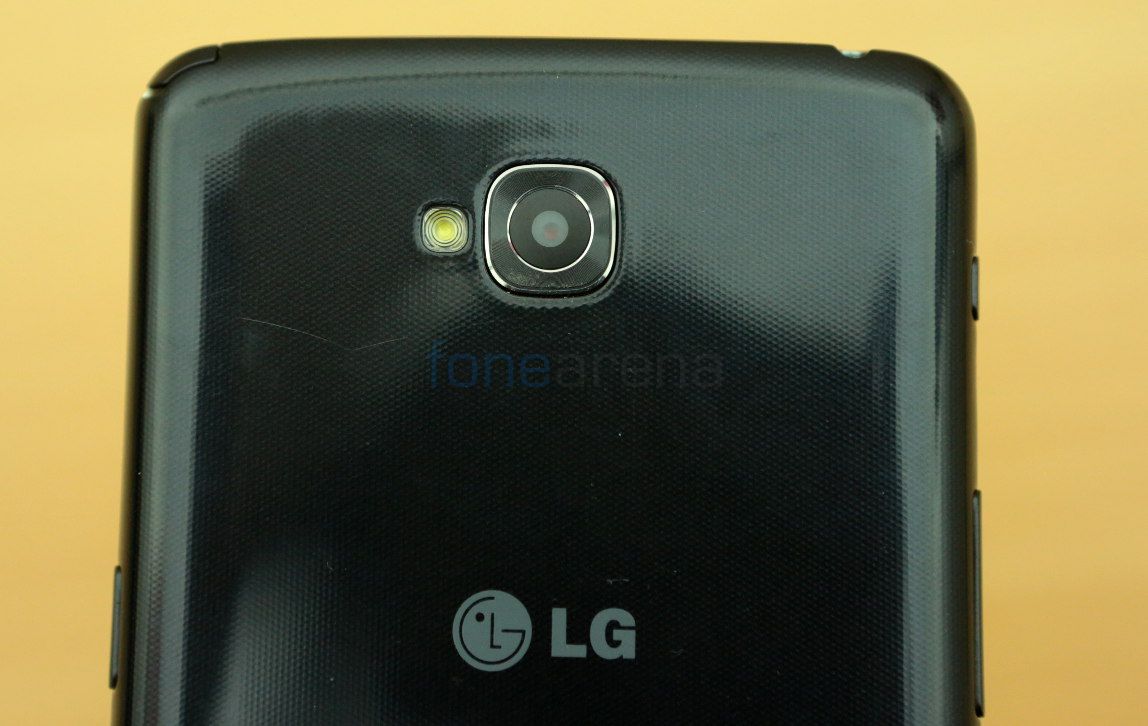 On the back there is an 8-megapixel camera with a single LED flash and a BSI sensor. The back is not prone to fingerprints, but prone to scratches. 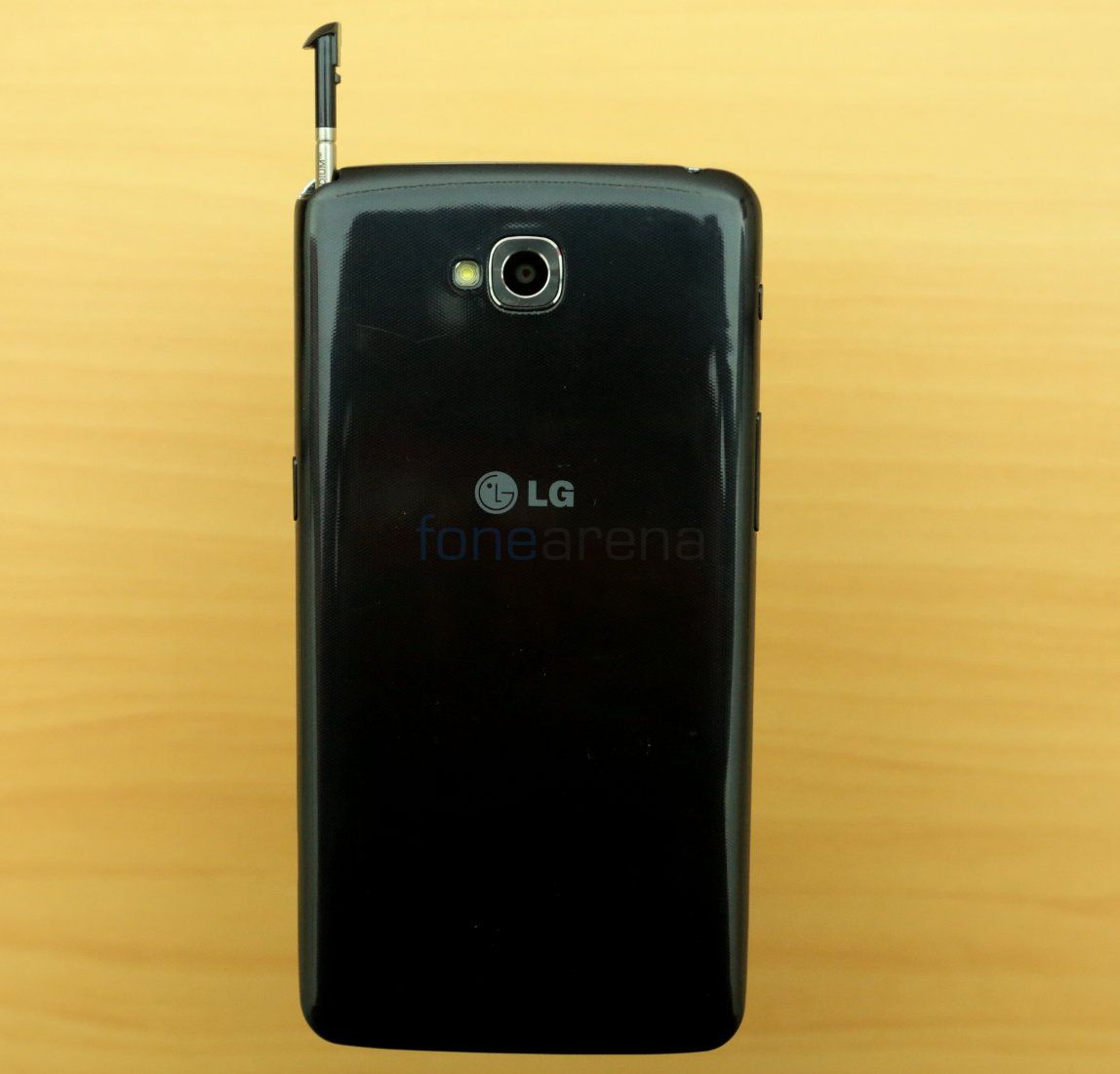 The phone is definitely huge to hold. As you can see, it is easy to dock the stylus on the top, so that you don’t lose it. 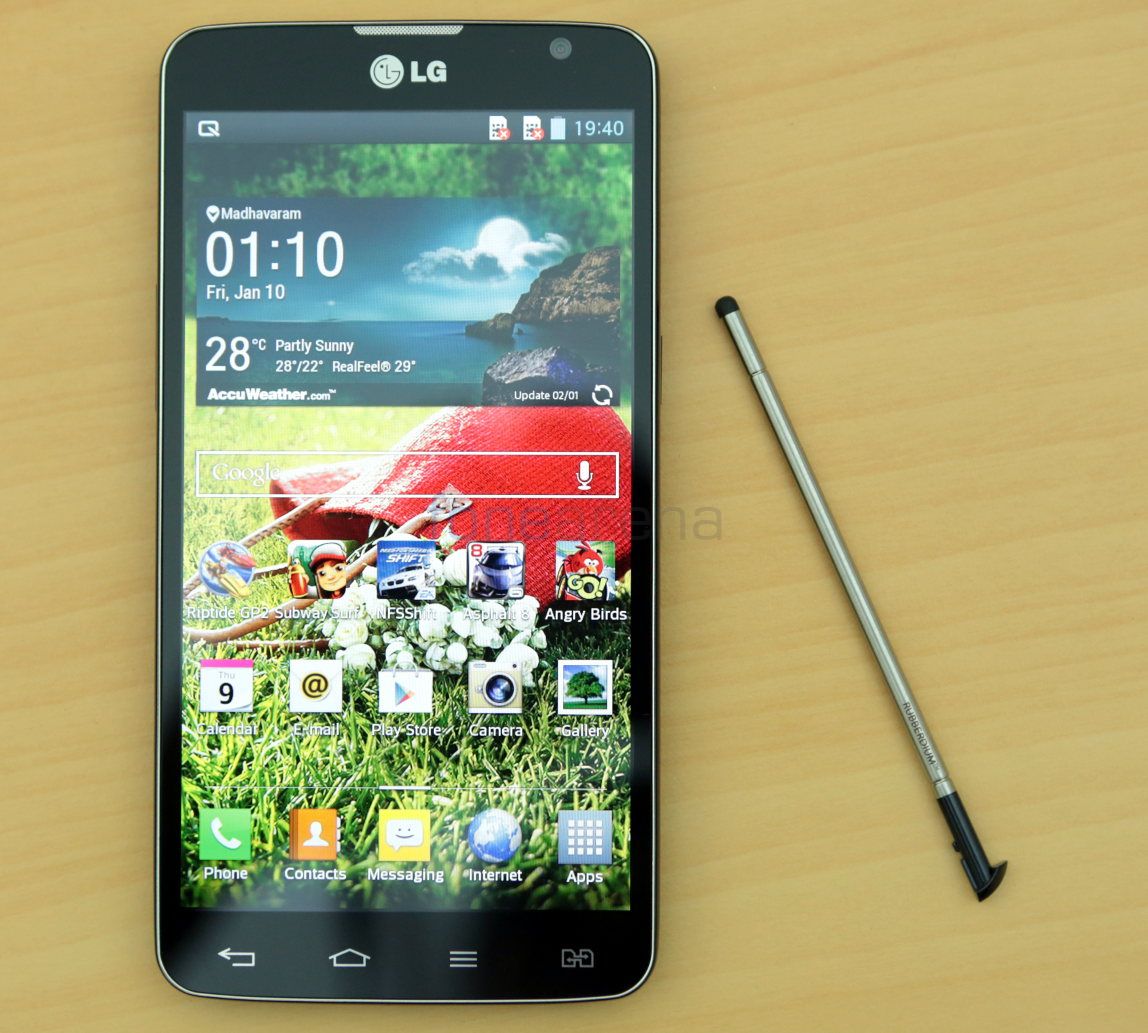 It comes with a Rubberdium stylus that you get with the Vu series. It is more useful to take notes and for drawings. 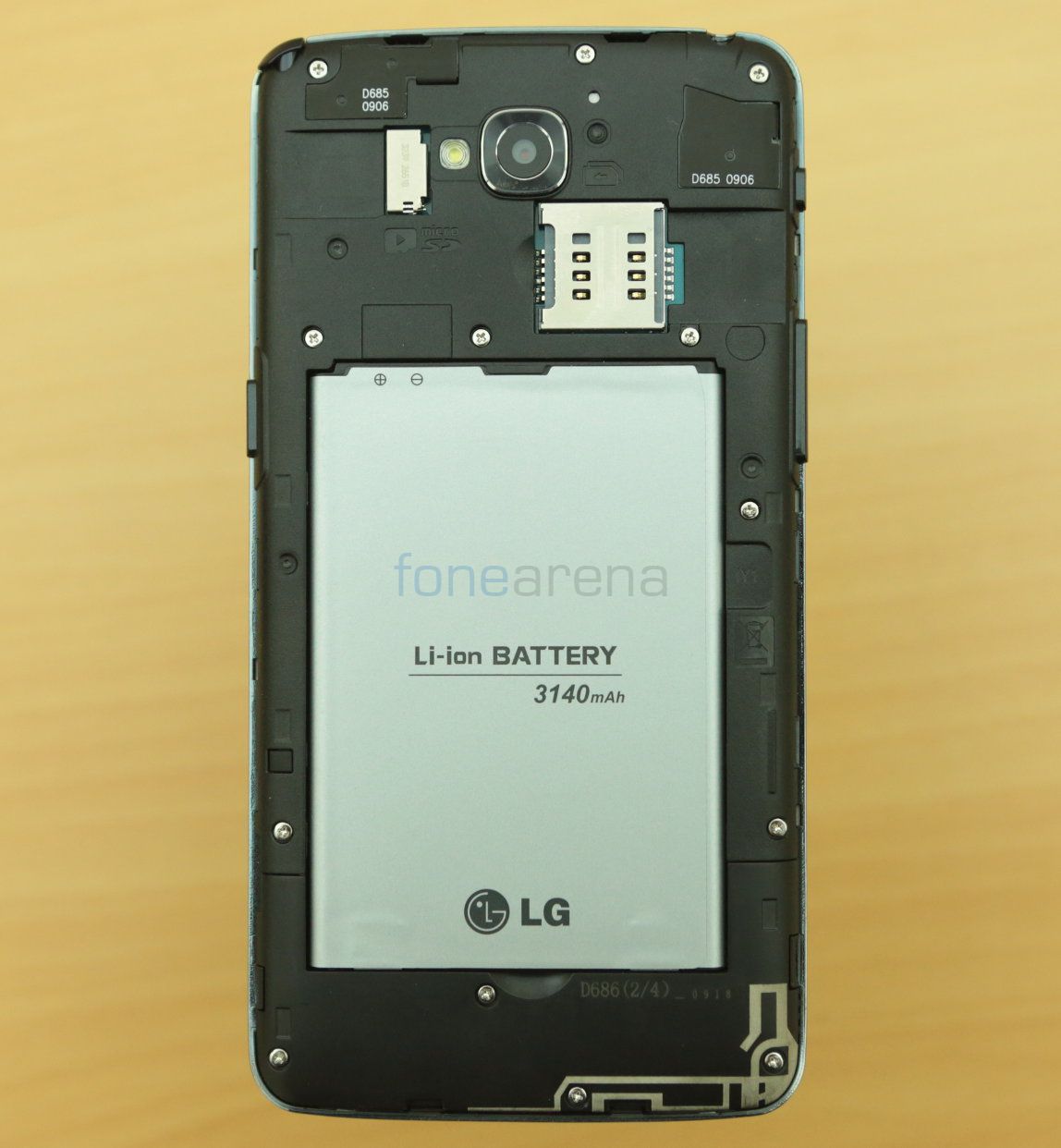 Once you open the plastic back cover, you can see the slots on top and a huge 3140 mAh battery. 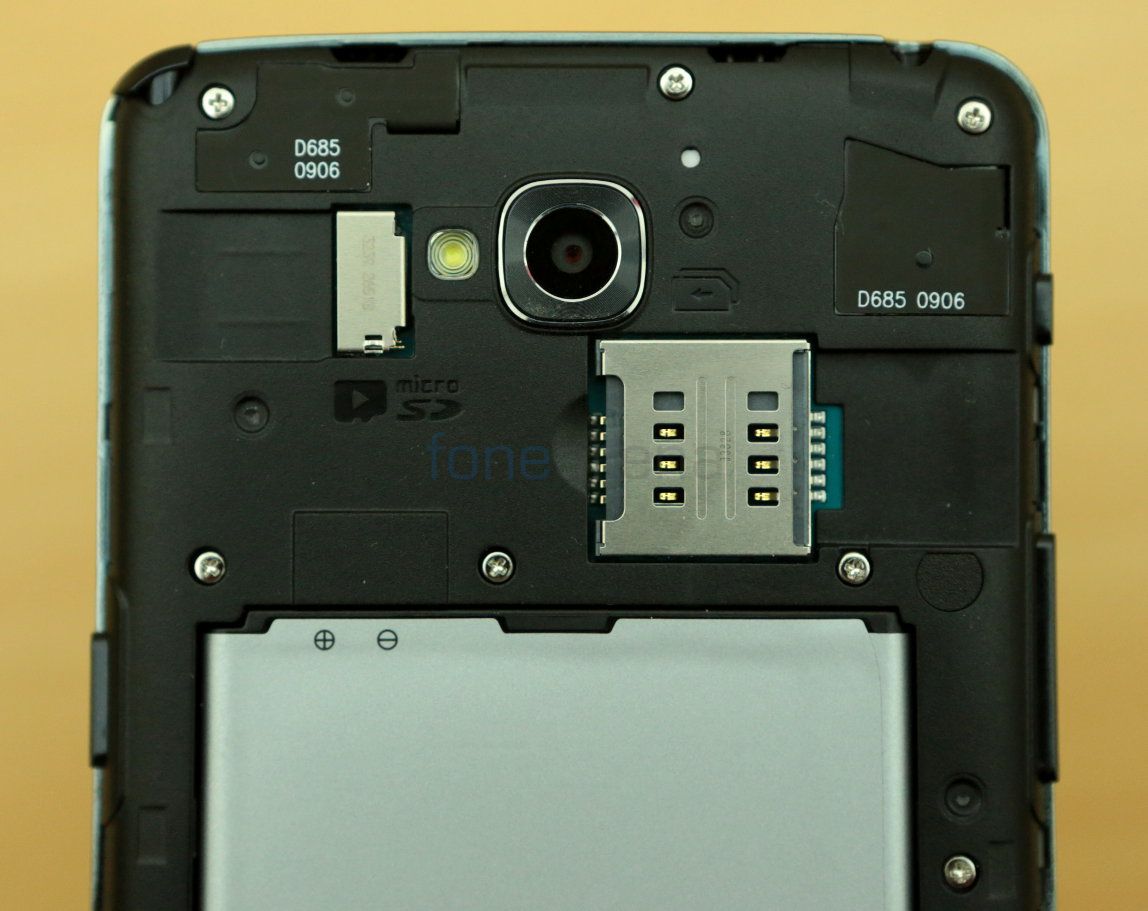 The phone uses a standard mini SIM cards. The slots are present one over the other, just below the camera module. Beside the camera is the micro SD card slot which lets takes cards up to 32GB. 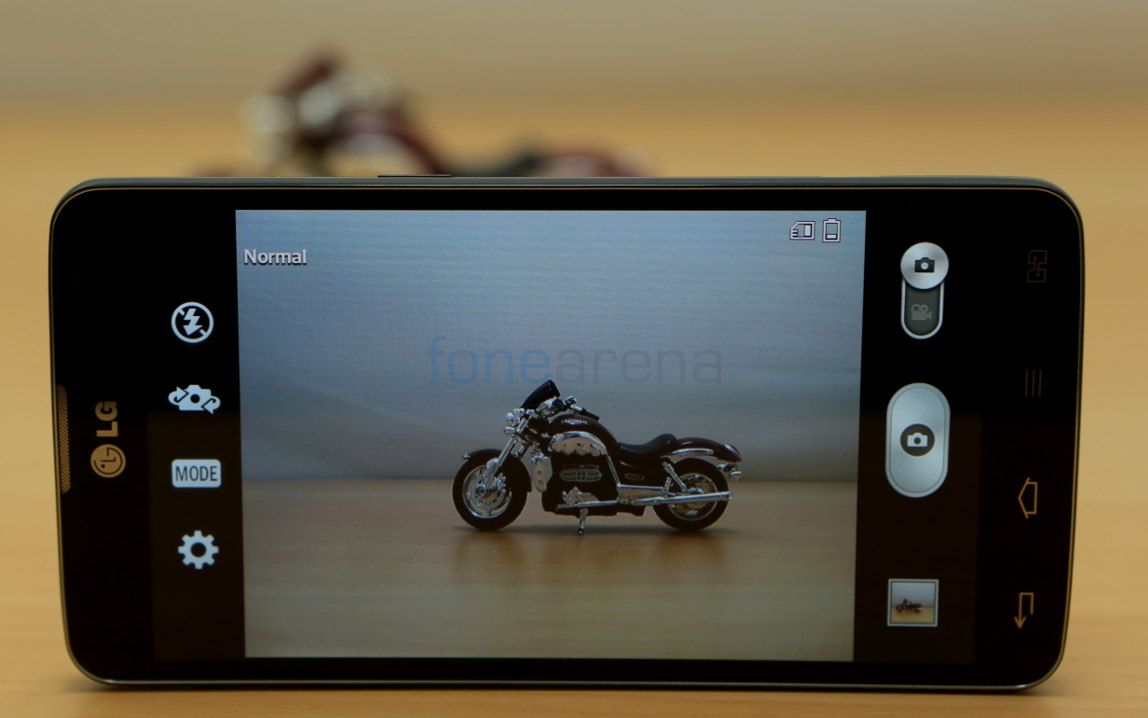 The 8-megapixel auto focus camera captures decent shots, but it’s a hard to focus quickly. The BSI sensor helps a bit, but low-light images with flash were not impressive. You can use the QuickButton to launch the camera and also use the volume rocker to capture images when you open the camera. There are different scene modes such as Normal, Panorma, Beauty shot, Sports and Night, but it lacks HDR. You can adjust the brightness, ISO, White balance and also enable Cheese shutter that lets you shoot images with voice. It also has LED Flash that helps to shoot images in low lighting conditions.. You can switch to the VGA front-facing camera to capture shots, which is below average.

Check out some camera samples

It can record videos only at 720p HD resolution at 30 frames per second. The limitation is due to the low-powered dual-core processor, even though the phone has an 8MP camera. The video options are similar and also has option to pause and resume recording. Video quality is good and the audio is also crisp and clear, thanks to the secondary microphone.

Check out the HD video sample below. 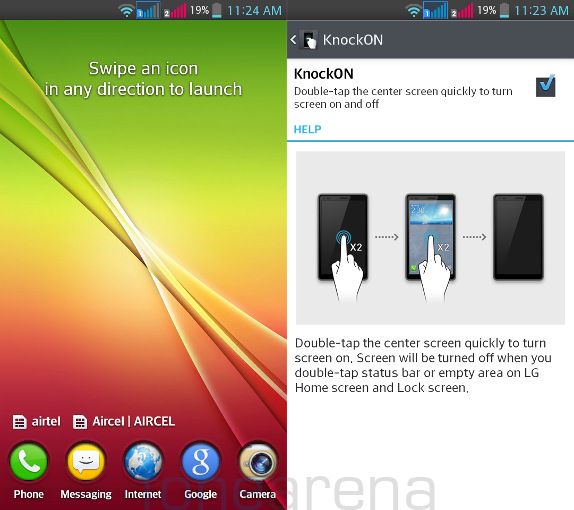 The G Pro Lite Dual runs on Android 4.1 (Jelly Bean) with LG Optimus 3.0 UI on top. Wish LG could have offered Android 4.2. Since it is very slow in offering software updates, it is doubtful if the phone would get future Android versions, even though it has OTA option. You also have KnockON double-tap to wake up option that lets you tap the screen twice lock the phone. To unlock, you can tap the screen twice again and swipe. The lockscreen also lets you launch a range of apps easily, just by unlocking the screen by swiping on the top of the app. You also have a range of lockscreen options to unlock the phone. 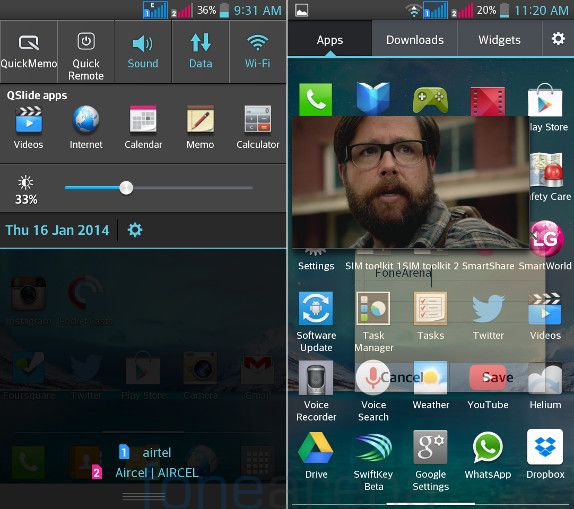 The phone has rich notifications. You also have two rows on the top of notification screen for Quick settings and QSlide apps. You also have a slider to control the brightness. There are a range of quick settings that lets you launch these apps easily from the lock screen. The QSlide apps are tiny apps that run on the top of the screen. These include a video player, browser, Calender, Memo and Calculator. You can adjust the opacity of a Qslide app and also expand it to full screen, but you can run only 2 QSlide apps at a time. You can read more about the QSlide in here. 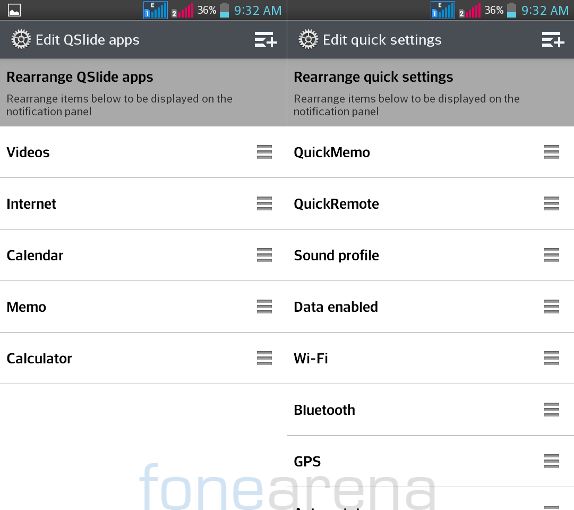 There are just 5 QSlide apps, which you can add or remove or change the order, but there are a lot of items in the quick settings menu. 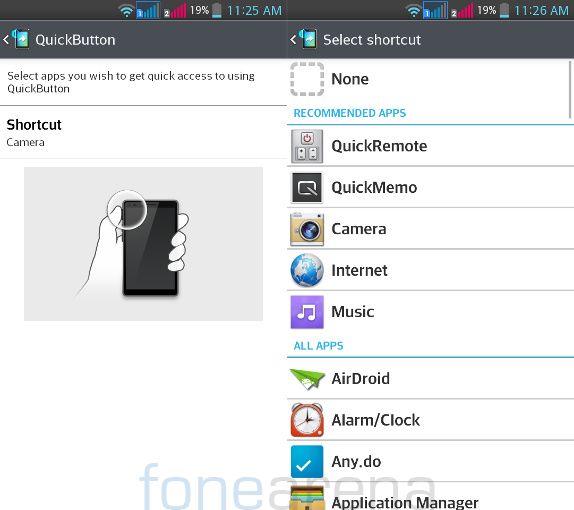 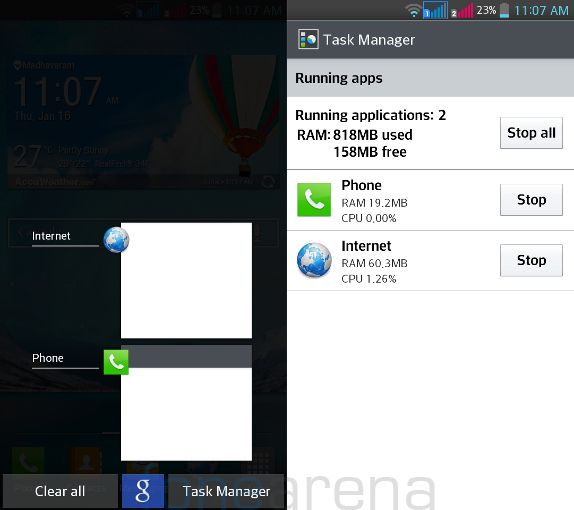 You can hold the home button to get to the multi-tasking or recent apps menu. You can just swipe to clear the apps or click “Clear all” to close all the background apps. You can also launch Goggle Now from the menu and also switch to Task Manager that shows the overall RAM usages and also RAM and CPU usage of the apps running in the background. Out of 1GB of RAM, you have 976MB of usable RAM and over 800MB of RAM is used when the phone is idle. 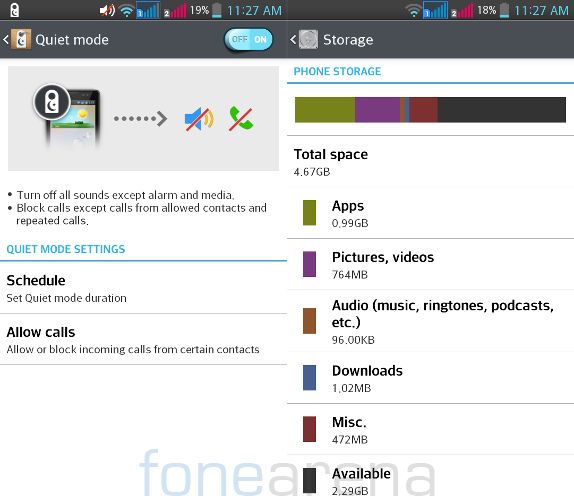 Other software feature is Quiet mode that lets you schedule a time period when you want turn off sounds. You can also block all incoming calls except the ones that are in your contact list. Out of 8GB of Internal memory, you have 4.67GB of usable memory. Sadly, you don’t have an option to move apps to the SD card. 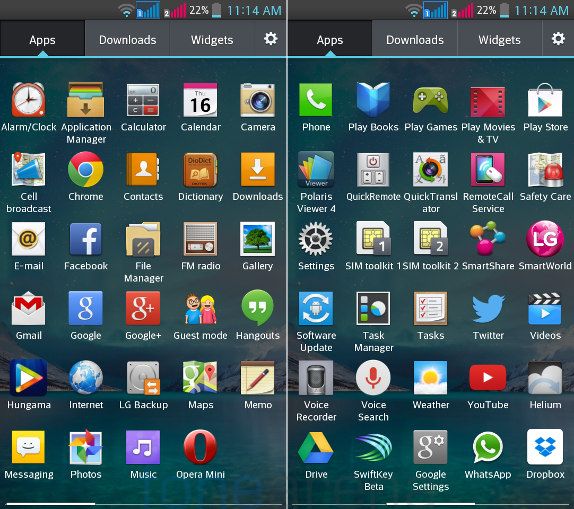 The menu has separate tabs for Apps, Downloads (downloaded apps) and Widgets. You can click the icon on the top right to change the position of the icons. There are the usual utility apps such as Alarm, App Manager, Calculator, Calendar, Guest mode, Voice recorder, and Weather. Polaris office lets you view office documents. Other LG apps include, QuickRemote, QuickTranslator and LG SmartWorld app store. You also have Hungama app to download music. 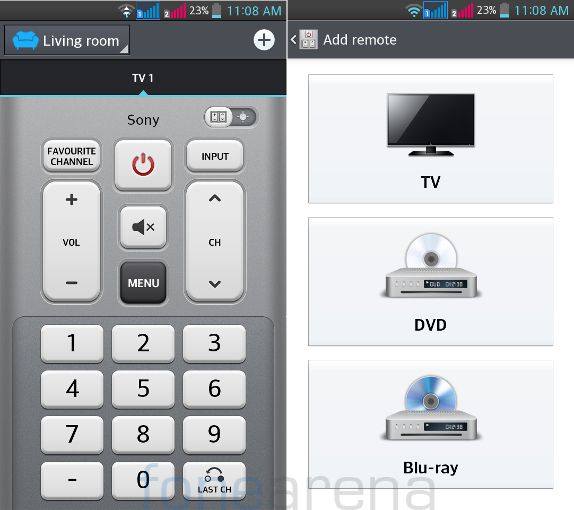 Since the phone has IR Blaster, you also have a QuickRemote app that lets you use the phone as a remote control for home appliances. You just have three devices, TV, DVD and Blu-ray. You can set up different remote for different rooms such as Living room, Bedroom etc. Set up takes few minutes, but it works perfectly and also has all the top brands. This is definitely a great feature that is hardly seen on mid-range phones. 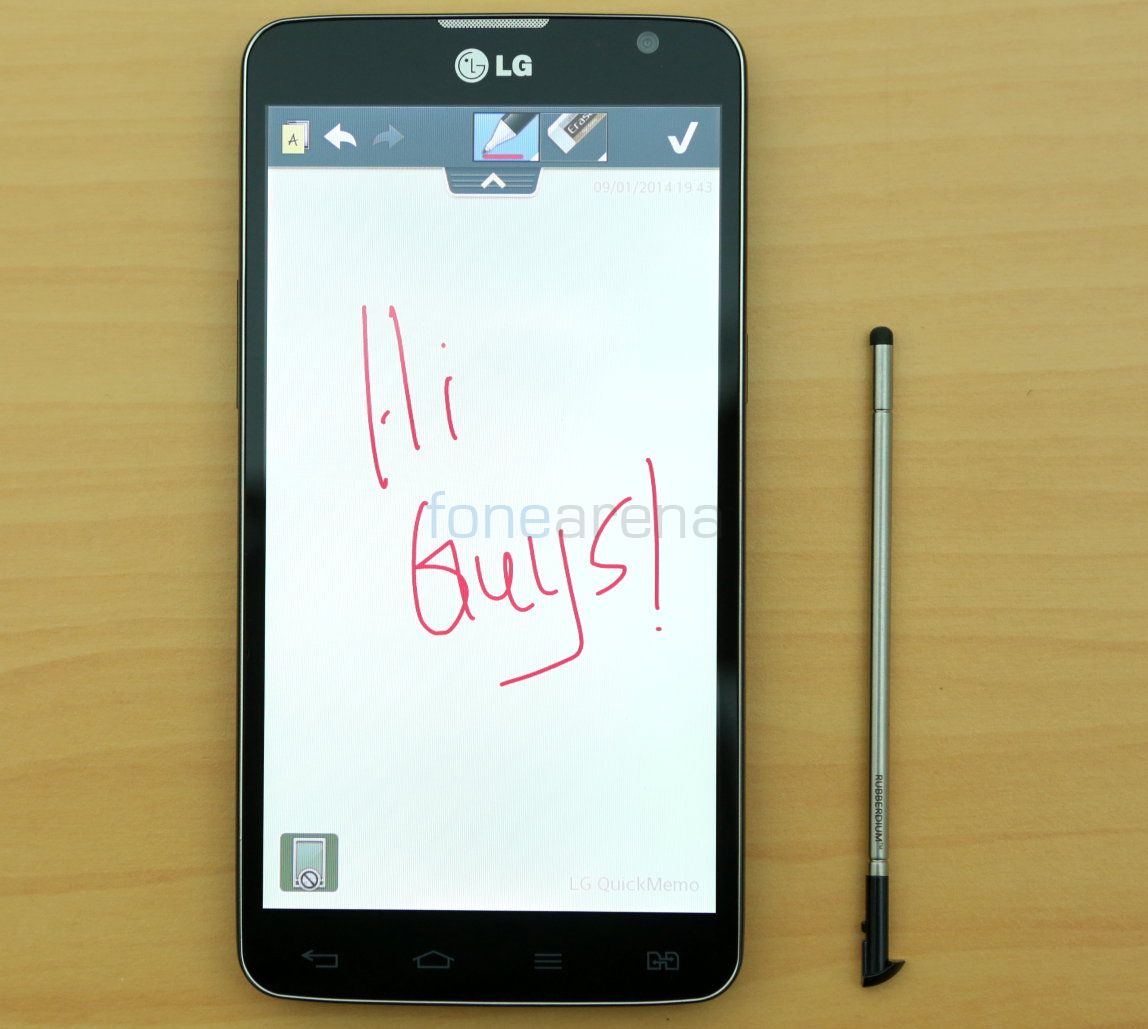 The QuickMemo lets users you capture of any type of content such as web pages, graphical images, photos and videos instantly and jot notes on the screen using the stylus. The stylus is good, but it is not accurate since it lacks a Waccom digitizer, but you can’t expect it in mid-range phone. The rubberdium stylus is large and is easy to hold. You can also share your QuickMemo notes to your social networks and e-mail. You can easily enable QuickMemo using the QuickButton or from the notification bar. 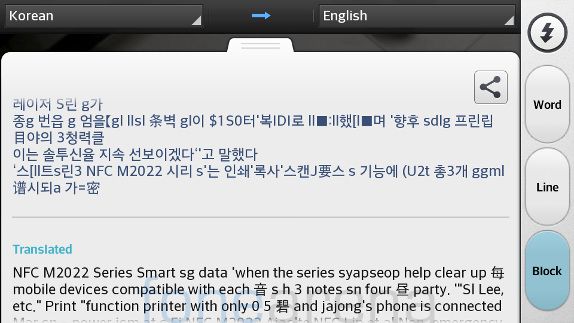 The Quick Translator app recognizes 44 languages with OCR (Optical Character Recognition) just by pointing the camera on a particular text. You can translate a word, line or a block or words such as a paragraph. As you can see, the final translation is not perfect. Bing search on Windows Phone and Google Translate are definitely much better. This also lets you translates the recognized text into 64 languages. 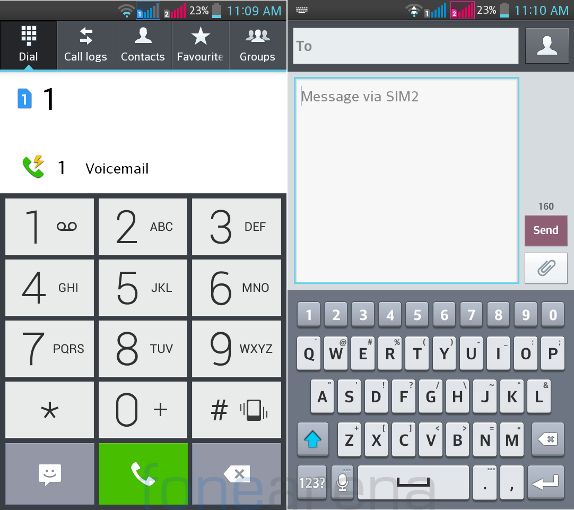 It has speed dial, call logs. There are also Groups, Contacts and Favorites in contacts. The Messaging features are similar to the previous LG phones that supports MMS and Email. The keyboard is similar to the previous LG keyboard. Since the phone has dual SIM support with a dedicated key, you can just press the button to switch to either SIMs to make a call or send a text message from a particular SIM. In the settings you have options for one-handed usage, that lets you move the screen lock, dialer and the default LG keyboard to the left or right to easily use these features with a single hand. 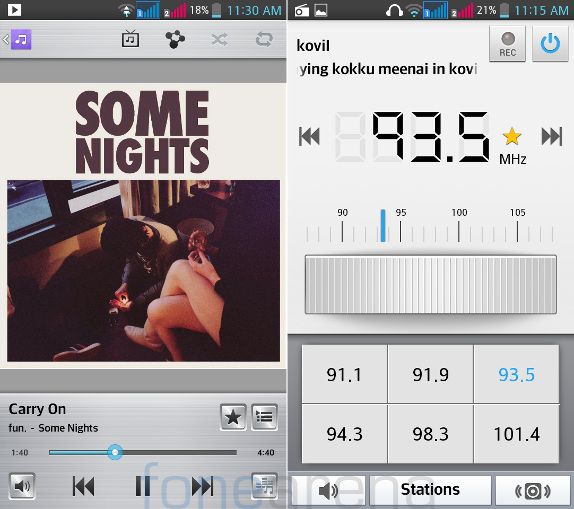 The Music Player supports MP3, WAV, WMA, FLAC, eACC+ and AC3 codecs. You can use the equalizer when you plugin the headset and there are different equalizers modes. The dual loud-speakers are definitely good. Since it is located on the bottom of the phone, sound doesn’t get muffled. There is a FM Radio with auto tune feature. You can also add your favorite stations a the bottom and select it quickly. The video player supports DivX, WMV, MP4, H.264/H.263 codecs, but the phone can only play 720p videos, and doesn’t support full HD playback, again a restriction due to the low-end dual-core processor. 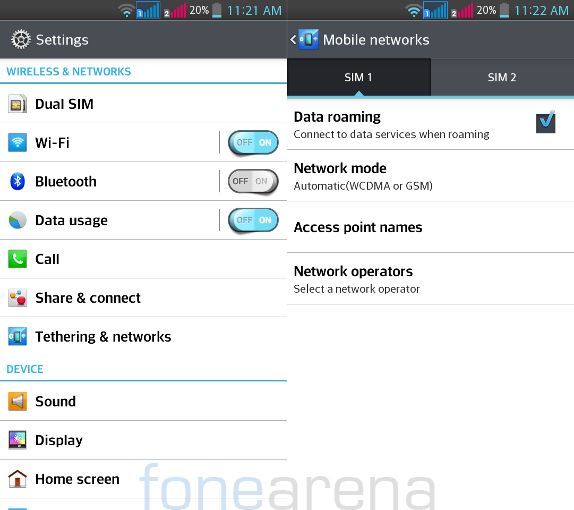 The connectivity features include 3G, WiFi 802.11 a/b/g/n with WiFi direct, DNLA, Bluetooth v3.0. There is a Smartshare app to share content to DLNA enabled devices. The phone lets you manage SIM cards separately. Only one SIM supports 3G at a time. The SIM switch key makes switching between either SIM cards easy. 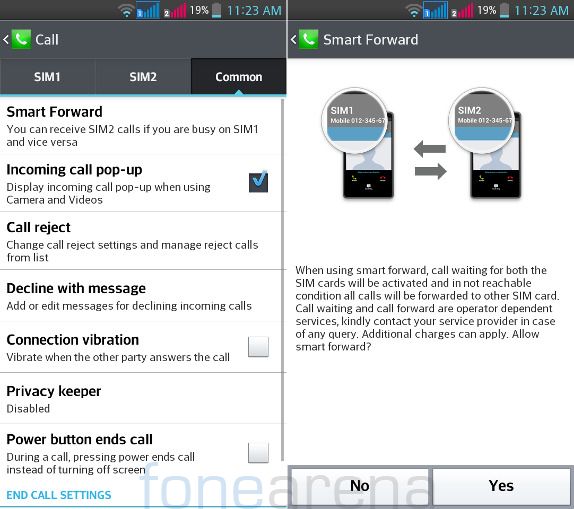 The phone also has Smart Forward, that is similar to Smart Dual SIM on Samsung phones. This automatically forwards calls from the phone number on SIM 2, even if a user is on the phone with SIM 1’s number. It doesn’t work on all the service providers since some of them don’t allow call forwarding when busy. 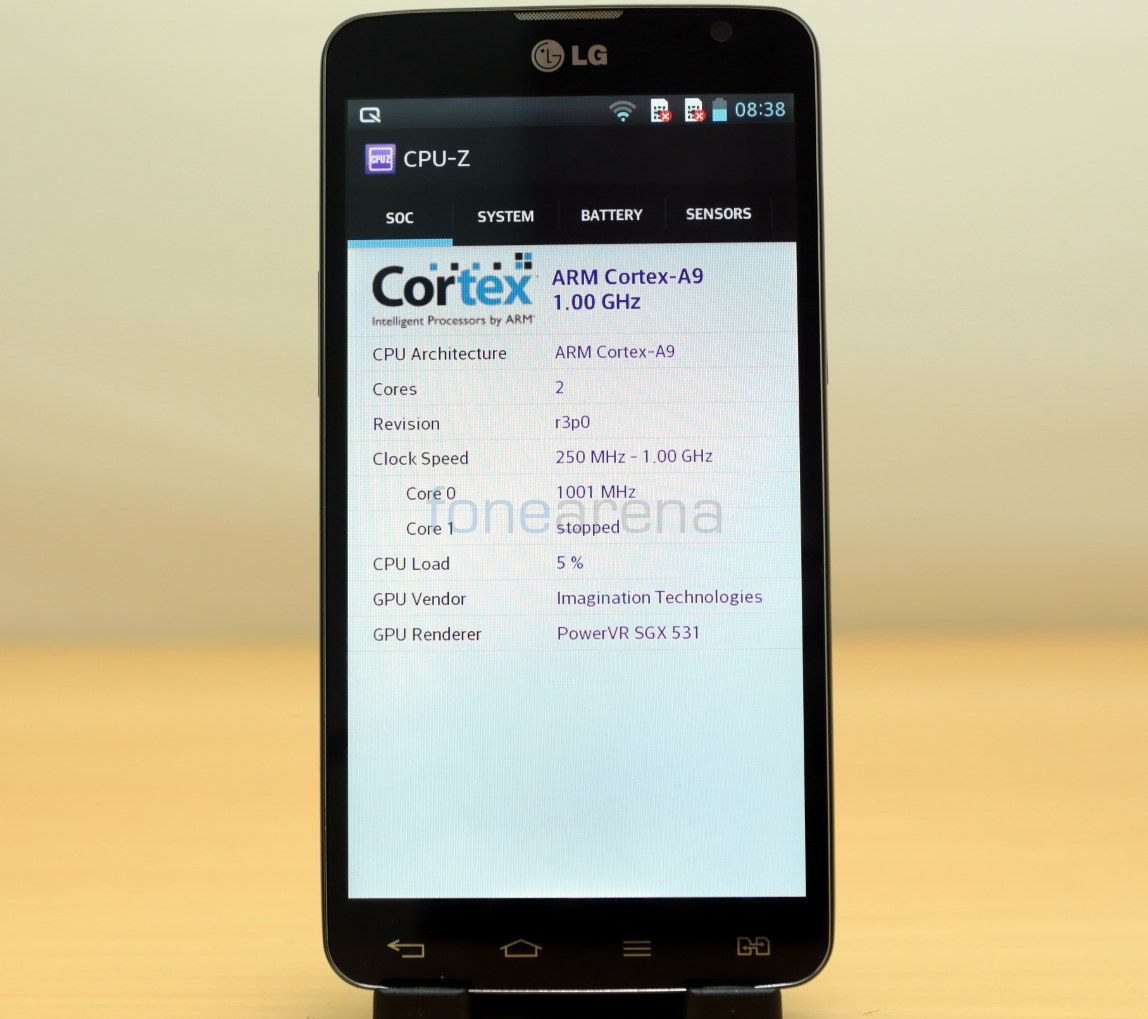 The phone is powered by a 1 GHz dual-core Mediatek MT6577 processor based on ARM Cortex A9 CPU with PowerVR SGX 531 GPU. The performance of the phone is strictly average, when compared to other phones in the similar range. Check out some benchmark scores below. 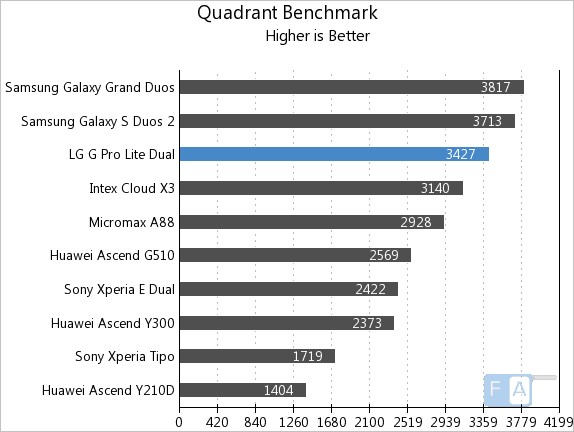 It scored 3427 points in the Quadrant benchmark. 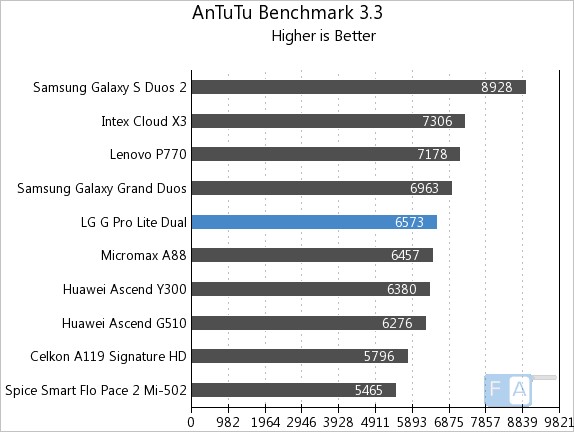 The G Pro Lite managed to score 6573 points in the AnTuTu Benchmark v3.3. 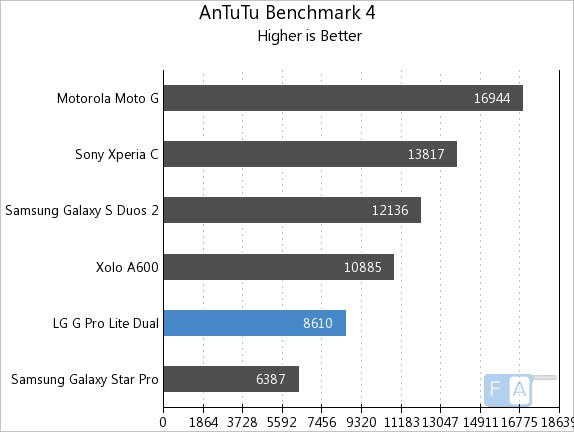 Even though the graphics was decent, the gameplay was not impressive.

As you can see in the gaming review, most of the games lagged, which spoils the gaming experience. 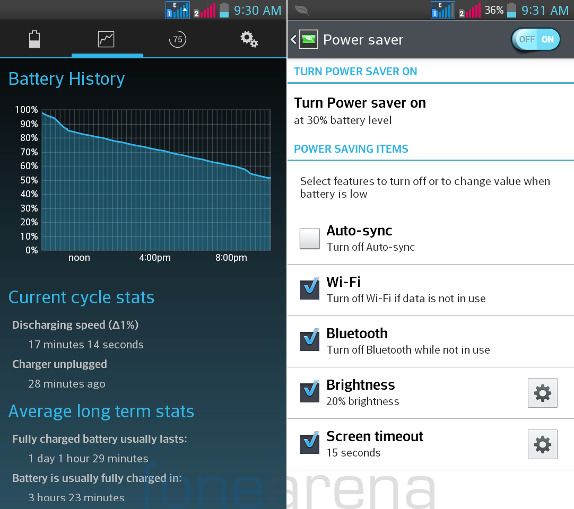 Even though the phone packs a 3140 mAh battery, the battery life is not impressive. It lasts for a single day with heavy use with both the SIM cards enabled. You can also use power saver mode that improves the battery life by turning OFF WiFi, Sync and other features when it reaches below a certain threshold you have set.

At a market price of around Rs. 18,000, the LG G Pro lite dual is not an impressive smartphone to invest. Even though it has some impressive hardware features, it misses out in important features such as ambient light sensor and uses an old and slow processor that lacks 1080p video recording or playback. If you really need a large-screen phone, you can probably wait for an upgraded version of the phone or choose other alternatives in the market.