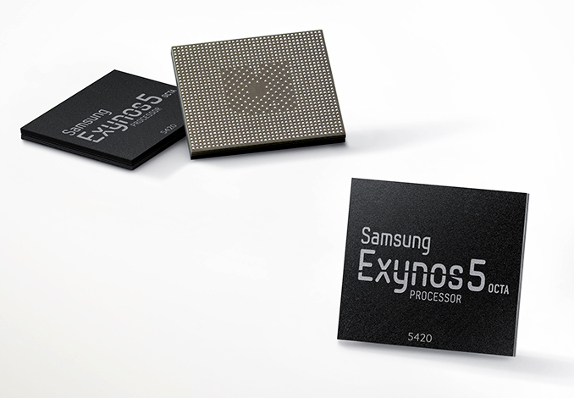 The main difference between these chips is the GPU. The Exynos  5410 Octa used a tri-core PowerVR SGX544MP3 GPU and the new 5420 Octa uses a six-core ARM Mali T628 MP6 GPU. Samsung claims that the CPU performance would be 20 percent greater and the GPU performance would be two times greater than the first Exynos 5 Octa chip. It also has support for OpenGL ES 3.0 and Full Profile Open CL 1.1 for multi-layer rendering in gaming, post-processing, sharing of photos and video and multi-tasking operations. The first Exynos 5 Octa chip is based on 28nm High K Metal Gate Process technology, so this is also likely to be based on the same technology.

The new Exynos 5420  Octa is currently in sampling stage and the mass-production is expected in August. Since the Galaxy Note 3 is expected later this year, it is likely to be powered by the new Exynos 5 Octa chip.