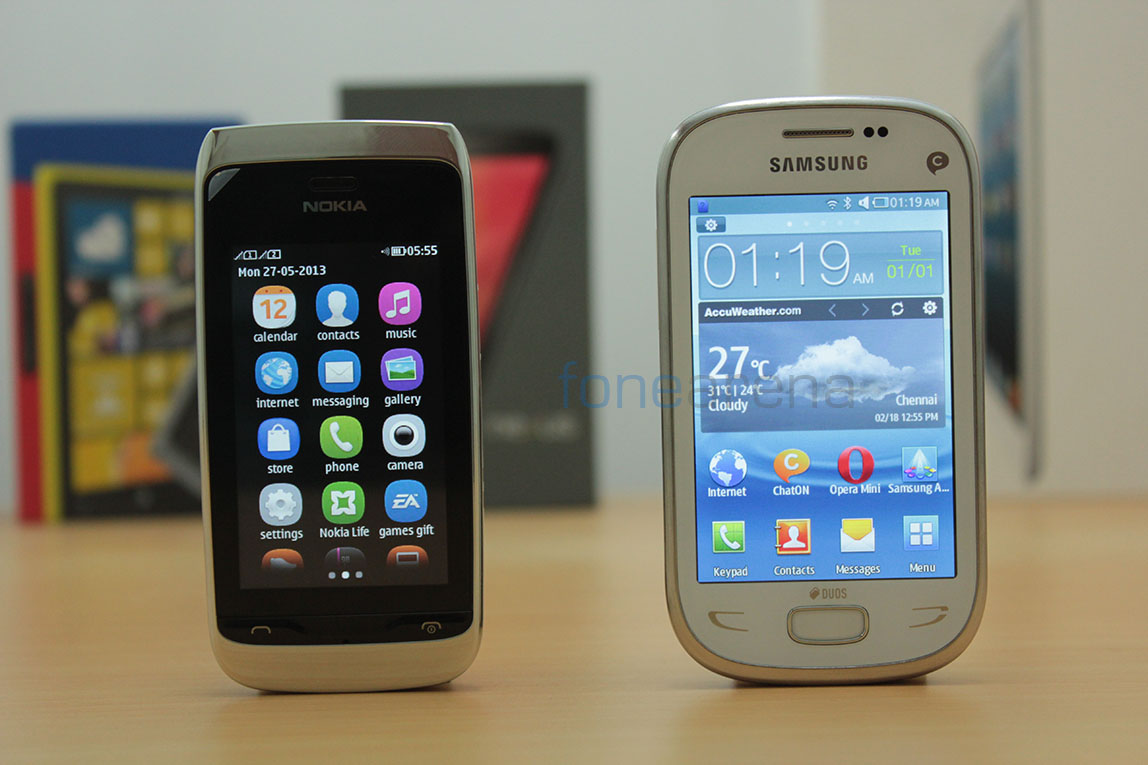 You might have seen a lot of  comparisons here lately, mostly dealing with big budget tablets or interesting smartphones, but we never were able to show you how the entry level market was like, especially with so many touch devices in that segment now. These are not smartphones, but they are not dumbphones either. Nokia particularly calls its new range Asha phone smartphones, which most might not agree with, but it has some really good features to talk about. Similarly,  Samsung also recently launched its Rex series of devices to combat the Nokia Asha range in a similarly priced market. So, which one is better? Lets find out.

We have chosen two candidates for the Asha vs Rex comparison, and both are similar in some specifications including the lack of 3G and the presence of WiFi. They are the Nokia Asha 310 and the Samsung Rex 90. While the Asha 311 is Nokia’s flagship Asha device, it lacks dual SIM support while including the support for 3G. Lets get on with the comparison then. 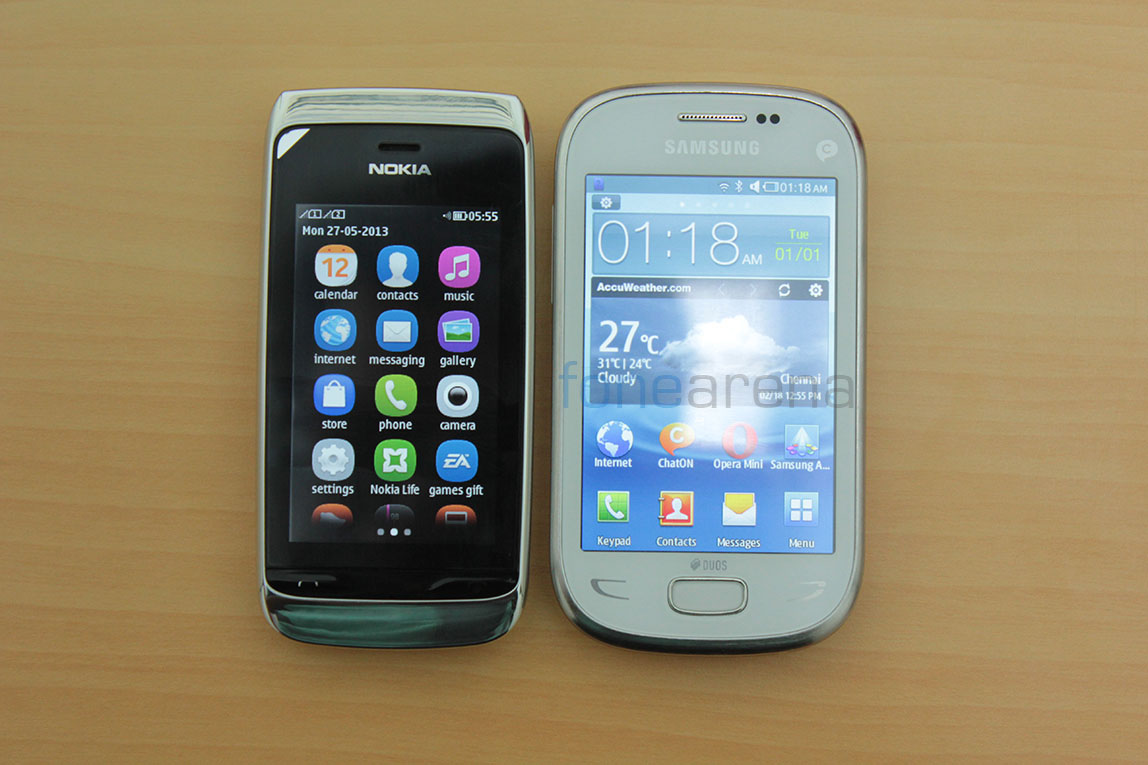 The Nokia Asha 310 and the Samsung Rex 90 share a lot of similarities, so lets go through them first. Both are Dual SIM devices with one SIM slot dedicated to hot swap and both have only 2G capability with WiFi for connectivity. Both are java based devices and can run java apps and games. But the major similarities end there. 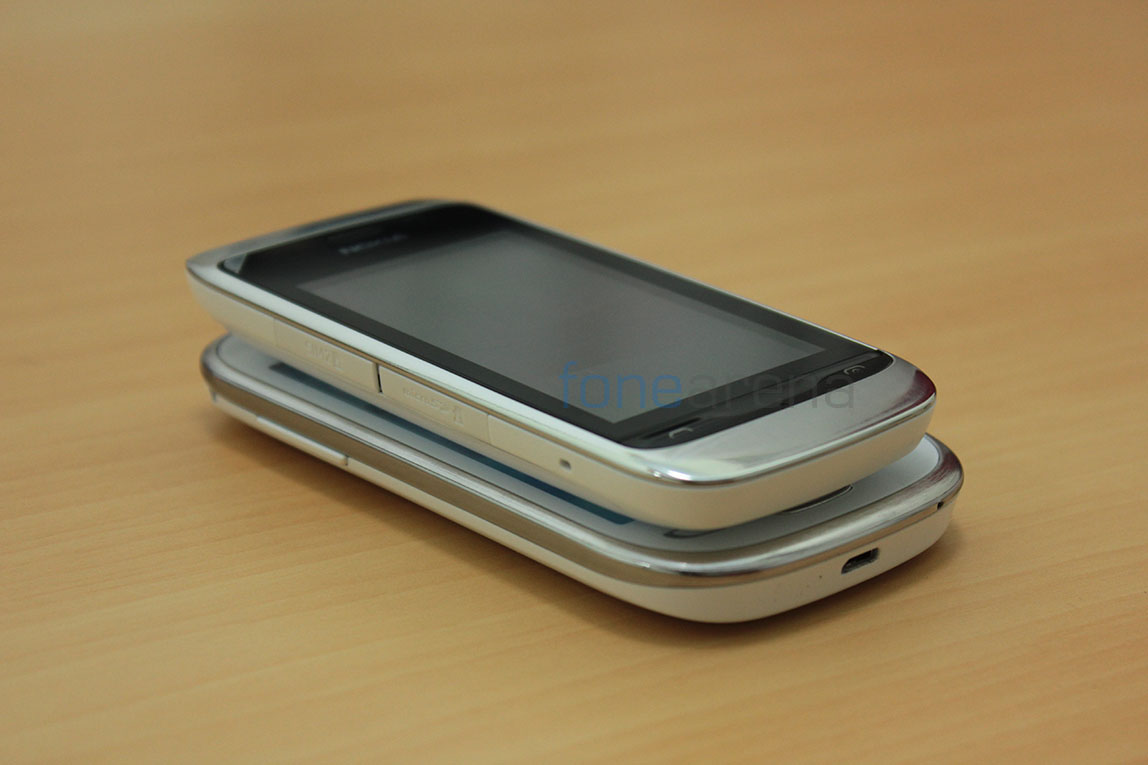 In terms of design and build, both are made of typical glassy plastic. While the Rex 90 carries over the design of the Galaxy range of devices, with a similarly styled UI, the Asha 310 carries over the legacy of the Symbian touch devices in design and bringing N9-like similarity to the UI. By choice of design, the Asha 310 has readily accessible micro SD card slot and second SIM slot, both of which are capable of hot swap while the Rex hides everything under the back cover, with the hot swap capability retained for the second SIM and the Micro SD card slot. 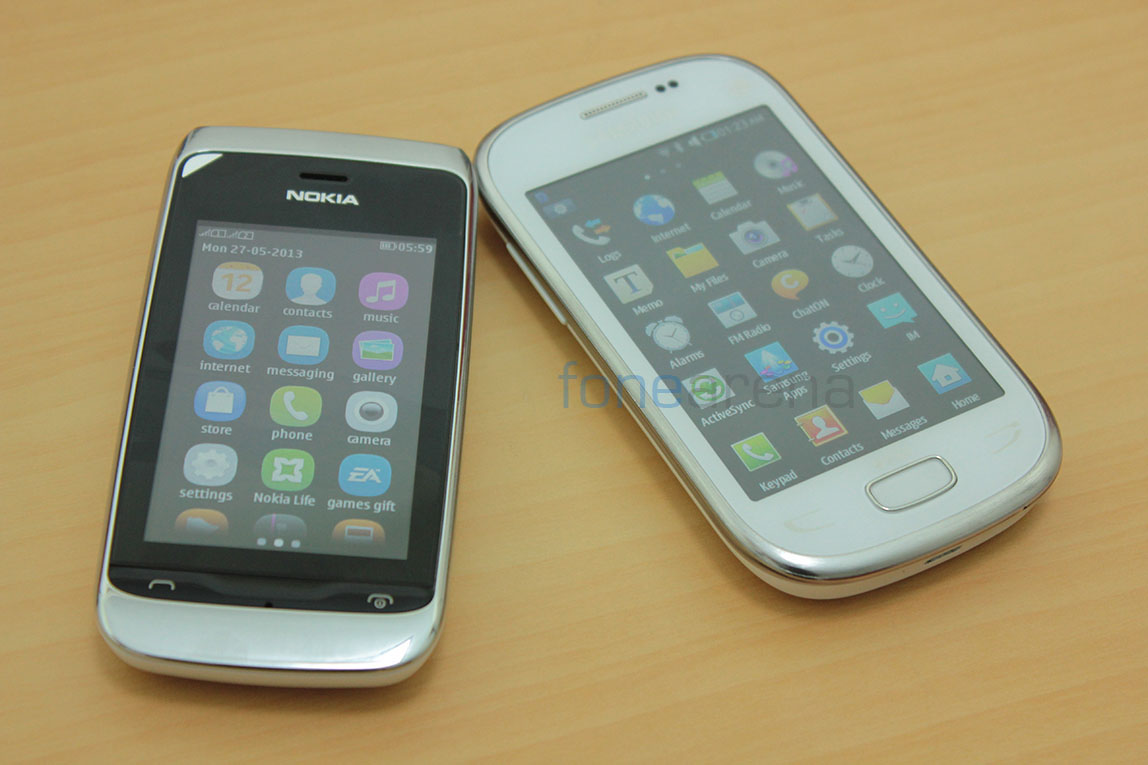 In terms of build quality, both the devices are really solid for the price. The glossy mirror-like finish of the Nokia Asha 310 overall is attractive but may be prone to slight damage of colour in the long term. The Rex 90 out and out is a typical Samsung device, with a surprisingly solid build at this price. The back cover could be better though, because the Asha 310’s back cover is a lot better built and is sturdier. However, both phones feel good in the hand, no complaints about that. 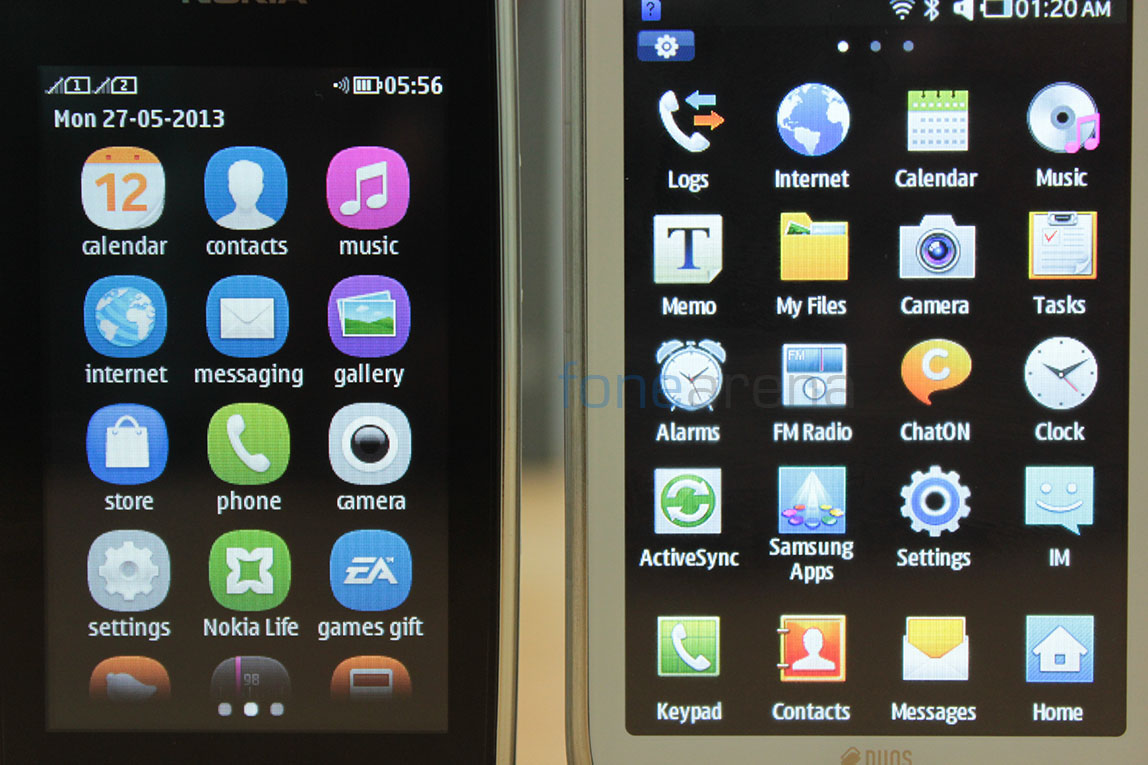 The display on the Asha 310 is a 3 inch 400×240 display, with a wider aspect ratio than the Rex 90’s 3.5 inch 320×480 display. While the resolution of the Rex 90 is better, the Asha 310, having a smaller display helps in compromising with the smaller resolution. Comparing them head to head, we find that the Asha 310’s display plays nicely with the UI, with slightly crisper graphics and has better colours and brightness control than the Rex 90. The Rex 90 display was hindered by saturated icons with bad design. 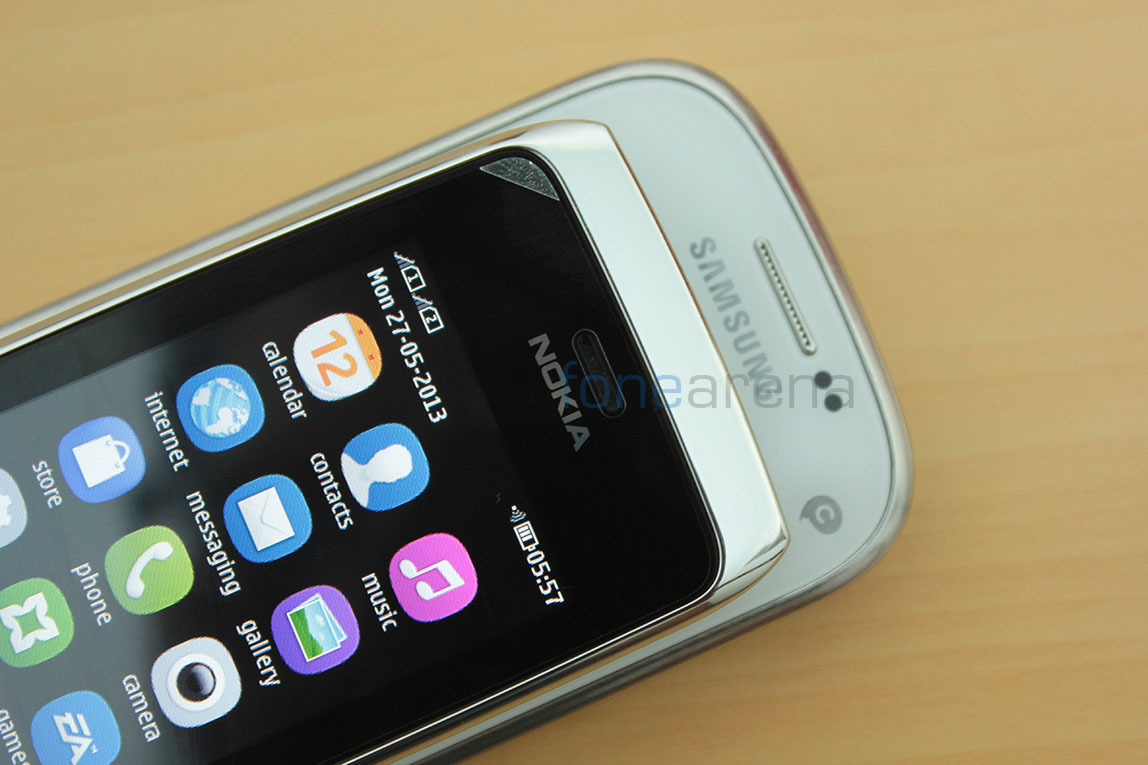 There is not much to talk about internals when it comes to feature phone but it is definitely a huge difference between the two devices. The Asha 310 is powered by a decent 1 Ghz ARM11 processor while the Rex 90 is powered by the 312MHz XMM2230 chip. This actually makes or breaks the experience of the device, and the paltry processor on the Rex 90 is definitely a hindrance for a better user experience. The Asha 310 is a lot smoother and has pretty nice animations for the photo gallery and plays videos without breaking a sweat while it is definitely a big task for the Rex 90. Even normal UI navigation is hampered by the slow processor on the Rex 90, making touch input seem laggy too. 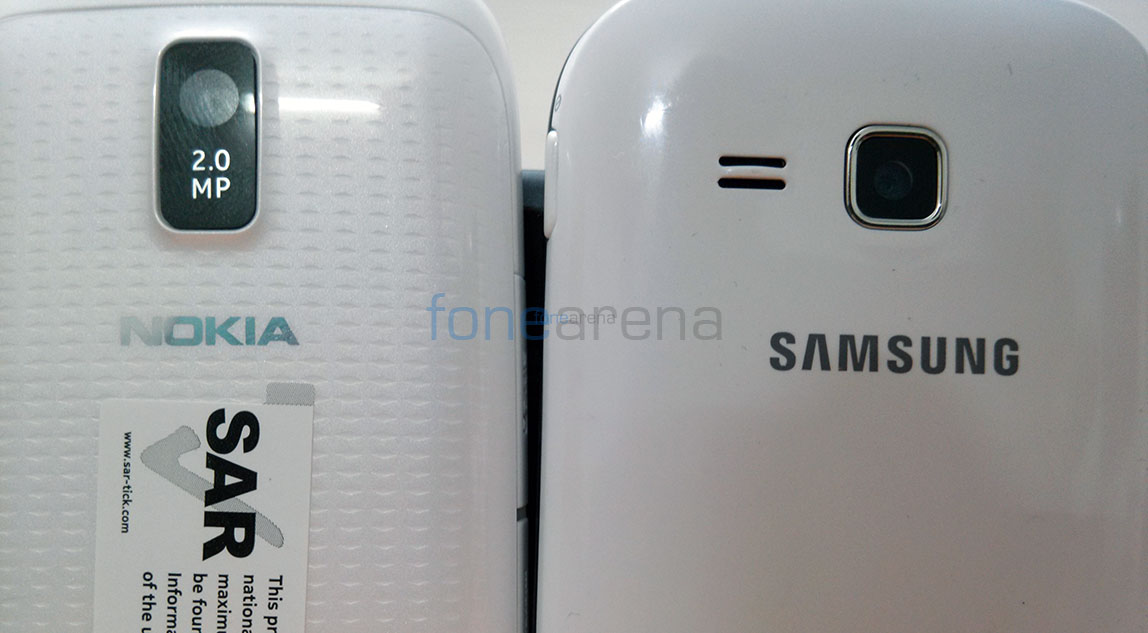 The Asha 310 has a 2 MP rear camera while the Rex 90 has a 3.2 MP camera. Both are fixed focus and are not much of a thing to mention about, but in comparison, the Asha 310’s lesser resolution camera takes better pictures than the Rex 90 in our experience. The Asha 311 with a 3.2 MP camera is even better. I think Nokia can do decent cameras in the low end too, which is a good thing.

Additionally, the Asha 310 comes with a pre-installed 4GB micro SD card and so has ample storage out of the box for media needs. While there is a micro SD card slot on the Rex 90, there is no pre installed memory, having to deal with the low 20 MB of internal memory out of the box. The battery on the Asha 310 – 1110 mAH is slightly better than the one on the Rex 90 with a 1000 mAH battery. 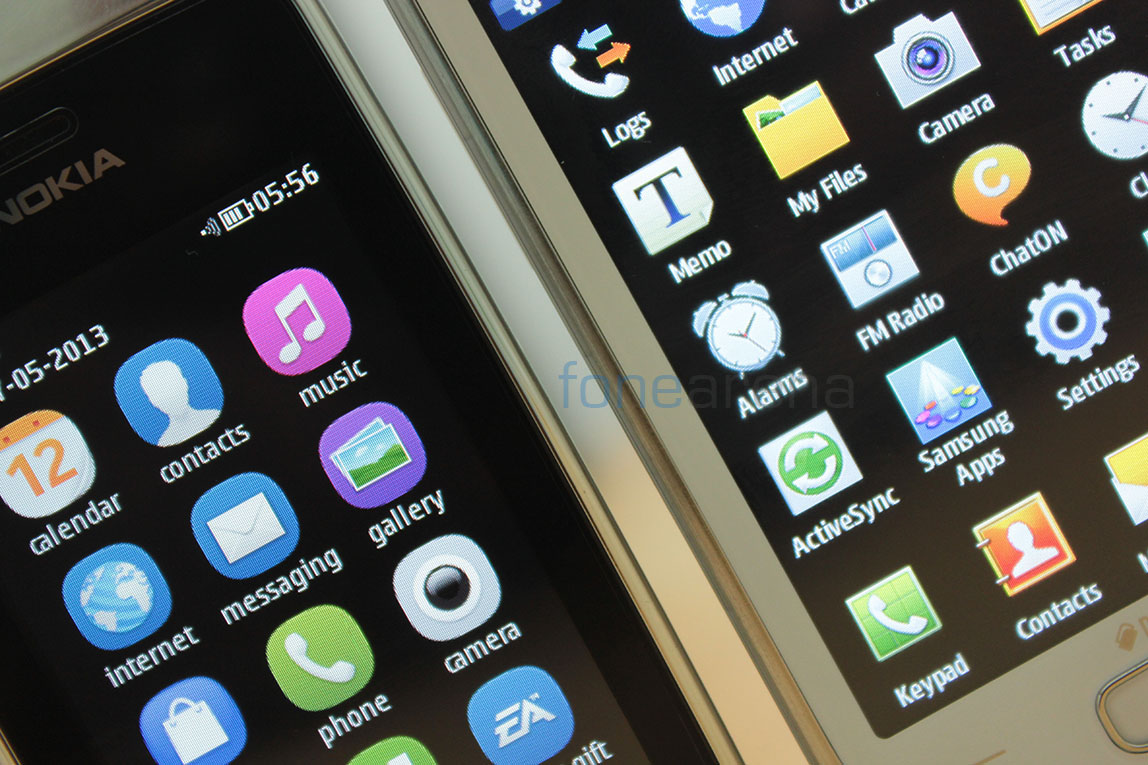 On the software and the services front lies the major differences between these two devices. First of all, like we mentioned earlier, the device experience is heavily hampered by the presence of a low end processor on the Rex 90, while it is the exact opposite on the Asha 310, so with that out of the way, lets see the other differences. Both run java operating systems but their services are quite different. Both have social apps like Facebook and Twitter pre installed but the experiences are vastly different, with the Asha 310 ending up being better. The Rex 90 has 10 free games from Gameloft and the Asha 310 has 40 free games from EA. While all the games are Java, Nokia has a few more with Angry birds and other important apps pre installed, like Whatsapp.

The Rex 90’s in built browser is Opera Mini while the Nokia Xpress browser is installed on to the Asha 310. Both are similar in functionality with server based compression, saving about 90% of data charges. In terms of services, both the phone come with a music subscription. The Nokia music catalog is a healthy 77 lakh songs while the Samsung music service boasts 2 lakh songs in total and increasing. 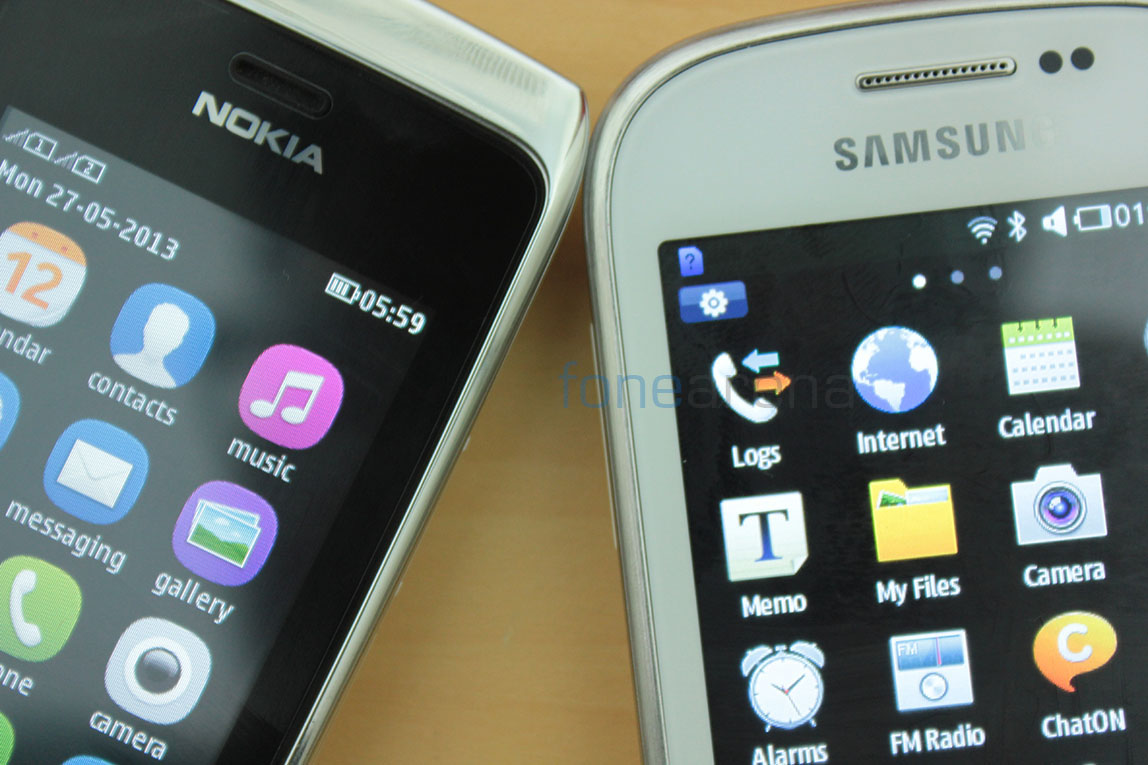 There are also other advantages for Nokia in terms of apps, by means of Whatsapp, which is not present on the Rex 90, Nokia maps, push notifications in Facebook and twitter apps, multiple e-mail accounts support with Activesync and support for more input languages. However in terms of UI, Samsung does offer more flexibility in terms of shortcuts and widgets on the multiple home screens.

Overall, the Nokia Asha 310 seems like a better deal than the Rex 90 and that is purely based on our opinion. We would like to hear your opinion too, so why don’t you sound off in the comments section below.