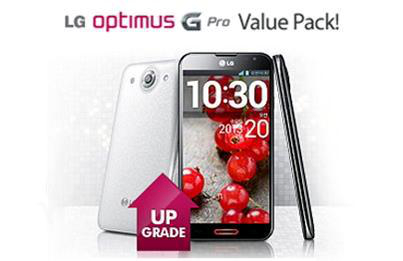 LG announced the Optimus G Pro Value Pack upgrade last month. The update has started rolling out in Korea that would bring Smart Video feature recognizes the position of the viewer’s eyes and automatically plays or stops the video and the Smart Camera feature, an extension of the Smart Video, would let you capture photographs using both the front and back cameras for a picture-in-picture composition.

The LG Optimus G Pro was unveiled in February, that went on sale in Korea on February 21st. LG announced earlier this month that they have sold over half a million Optimus G Pro units in Korea.

The LG Optimus G Pro Value Pack upgrade is now rolling out in Korea gradually for all the three operators,  SK Telecom, KT and LG U+.