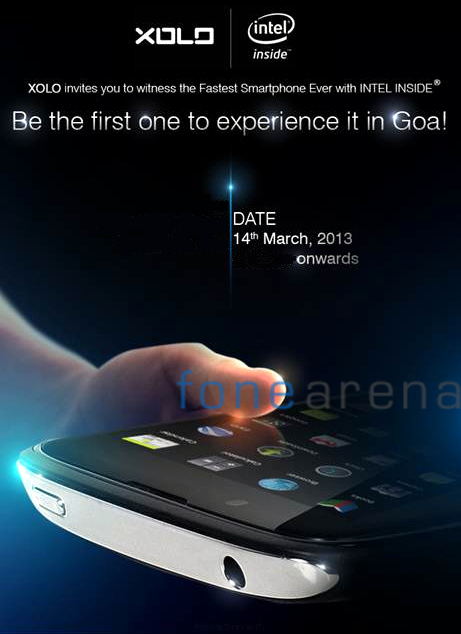 We got it confirmed that the launch event is happening next week. Xolo did not reveal any details about the upcoming device yet, but we can expect camera features such as burst mode, 1080p Full HD video recording and playback that is usually present in the Intel Atom-powered devices including the new Xolo X500 with a Atom Lexington Z2420 processor. The device is expected to support HDR camera capabilities and run on Android Jelly Bean. Lenovo K900 Clover Trail+ powered device with a 5.5 inch 1080p IPS display and 2GB RAM was unveiled at the CES 2013 back in January, but it is expected to launch in China in Q2 2013.

There is a ticker on Xolo.in website which counts down to March 14th. There is also a separate page on the Xolo website where you can register your details to know more about the phone when it launches. We will be there at the launch event to bring your more details about the device.

[Update: Xolo has sent us an invite for their Xolo smartphone launch in Goa on March 14th. It reads witness the Fastest Smartphone ever with Intel Inside.]