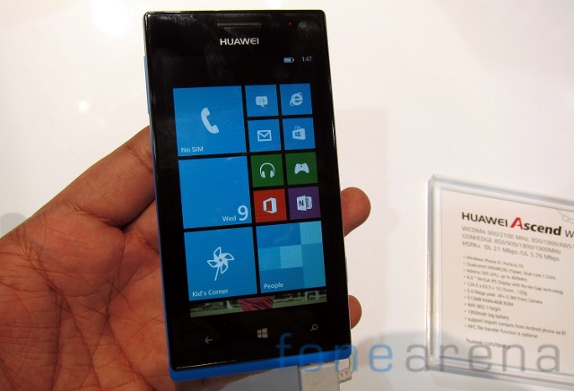 Huawei unveiled the Ascend W1, the company’s first Windows Phone handset at the CES 2013 earlier this month. We got you the hands-on photo gallery of the Ascend W1 from the event earlier this month, here is the hands-on video of the device. Even though the device has a large 4-inch (800 x 480 pixels) WVGA IPS display, the phone feels compact in hand. The display has OGS Technology that reduces the light consumption for a brighter and more vivid display. It has a 1.2 GHz dual-core Qualcomm Snapdragon processor with Adreno 305 GPU and runs on the latest Windows Phone 8 OS.

There is a 5 MP auto focus camera at the back with LED flash and the phone also comes with a 0.3 MP front-facing camera. It has 512MB RAM, 4GB internal memory, expandable memory up to 32GB with microSD and the connectivity options include, 3G HSPA+ , Wi-Fi 802.11b/g/n, Bluetooth 2.1 and GPS. It packs a 1950 mAh battery that promises 630 minutes talk time and 470 hours standby.

The Ascend W1 has removal back covers, and the phone comes in range of colors including blue, red, black and white.