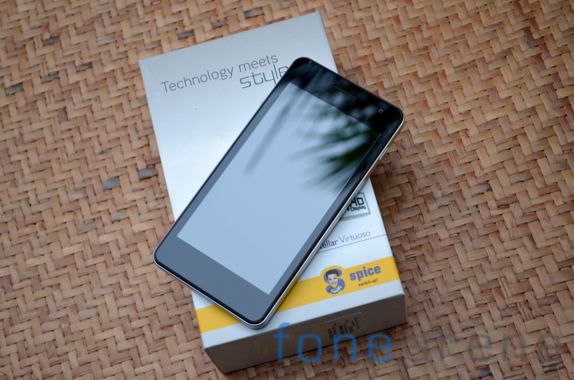 The Spice Stellar Virtuoso Mi495 is the latest addition to the particularly hot category of entry level Android smartphones. With a large screen, good build quality and potent specifications, the phone brings a lot to the table. But is it sufficient to stand out from its competition ? Read on to find out.

The box contents of the Spice Stellar Virtuoso Mi495 include the essentials and a few addition items like a spare screen protector and a cleaning cloth as well. 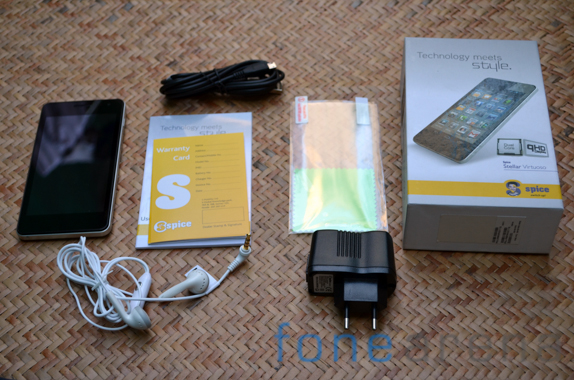 Inside the box you’ll find:

Hardware
Clad in faux aluminum dual tone finish, the phone is certainly striking to look at. While it does not have exemplary design virtues, it makes up for it with a shell that will easy withstand heavy and rough usage. 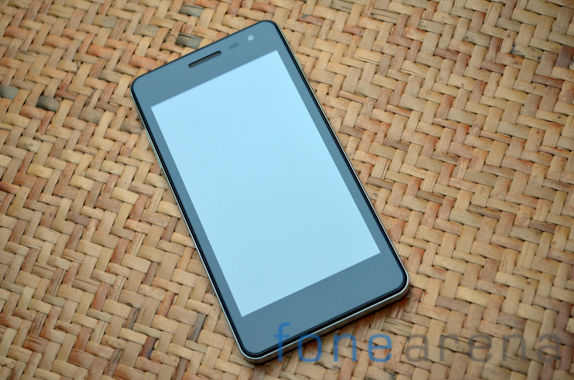 The front has a large 4.5 inch screen with a row of capacitive buttons that light up below it. 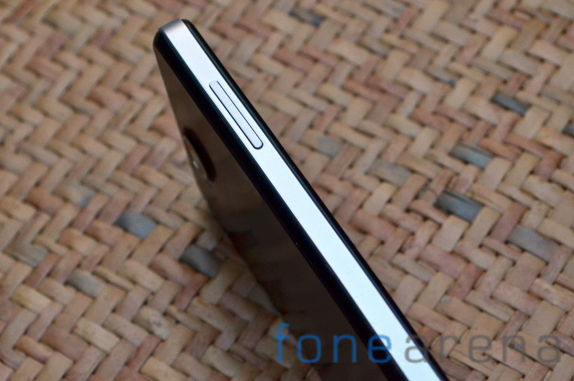 Spice has done a good job on the aesthetics of the handset by keeping it as clean and free of buttons as possible. The only key on the left side is the volume rocker which is easily controlled single handedly. 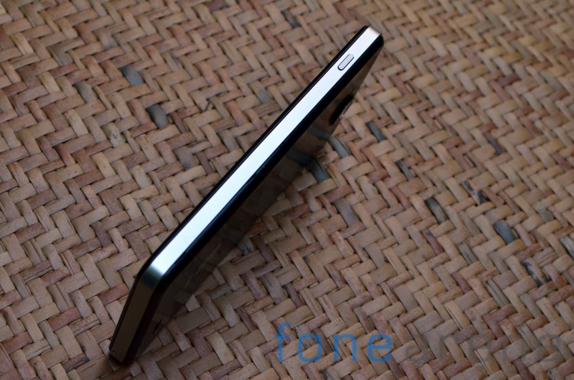 Over on the right we have a power key. Unlike many other higher end manufacturers, Spice has sensibly placed the power key on the side of the handset allowing you to easily access it by extending your thumb. The lack of a camera key is a bit of a disappointment here. 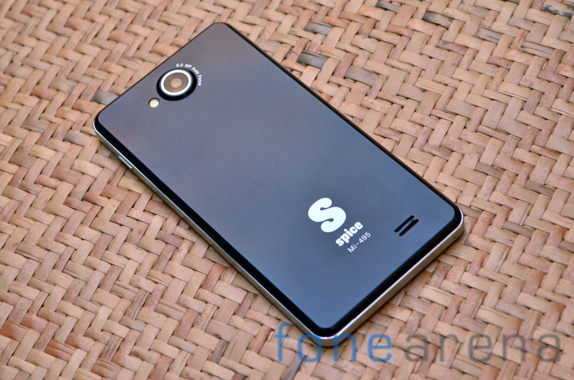 The back of the handset continues the clean lines seen all around the body of the phone. Finished in a solid faux-aluminum material, the back panel feels solid. Centered towards the top is the 8MP camera which protrudes a bit from the shell and might end up getting scratched if not handled carefully. To the left of the camera module is the LED flash. 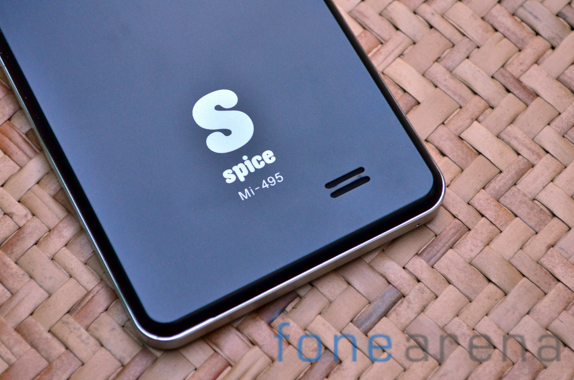 Moving towards the lower half of the handset you can spot a minimal amount of Spice branding. Below it is the name of the handset itself. There’s also the speaker grille to the right of the logo. Overall we’re quite impressed by the quality of construction of the handset and we feel that it ranks amongst the best in its category.

Screen
The screen of the Spice Stellar Mi495 is a qHD (960×540) IPS panel with surprisingly wide viewing angles. 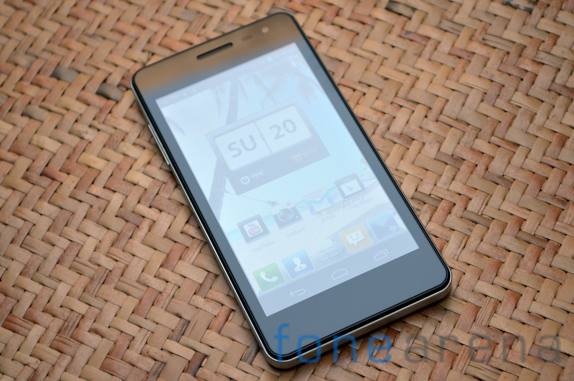 The screen is sufficiently bright and the color contrast is good enough.We were fairly satisfied with the quality of the screen and were particularly impressed with the sunlight visibility.

Connectivity
The Spice Stellar Virtuoso Mi495 is a dual SIM handset which supports active standby on both the SIM card slots. There is the usual WiFi b/g and Bluetooth 2.1 connectivity onboard. As expected from any modern day smartphone, GPS functionality is available to make use of turn by turn navigation and location based applications.

Battery Life
The phone is equipped with a 1700 mAh battery pack which has been rated for 6 hours of talk time and up to 200 hours of standby. In our experience, we could get usage of about a work day from a single charge on heavy usage. Using the handset sparingly could potentially allow you to use the smartphone for two days on a single charge.

Camera
The camera is a 8MP autofocus unit and is accompanied by a LED flash for low light shots. 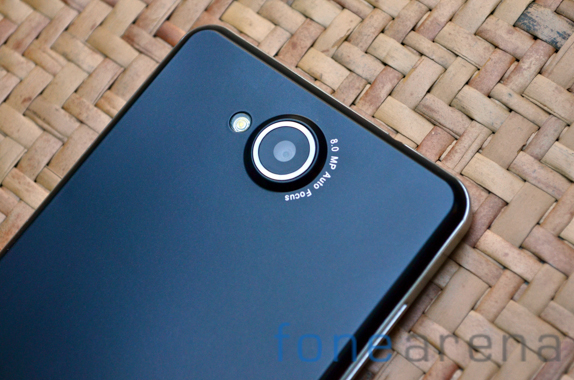 In our experience, the camera handily outperformed its competitors like the Xolo A700.

Shots tend to be crisp and white balance is well preserved. On the other hand, it wasn’t too hard to notice compression artefacts. The handset should suffice for quick shots on the go.

Software
The Spice Stellar Virtuoso Mi495 runs Android 4.0 Ice Cream Sandwich which might be a dampener for anyone expecting JellyBean onboard. 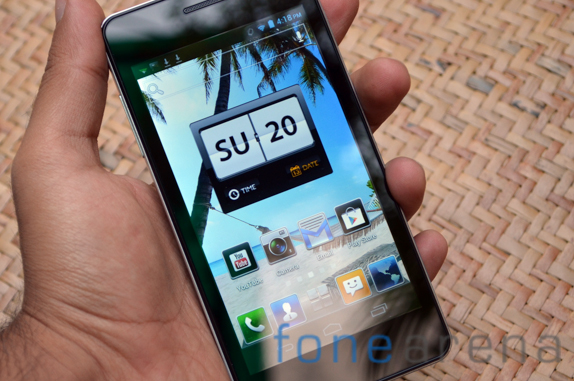 Spice has equipped the handset with custom icons but apart from that the handset runs stock Android. Not much to see in terms of pre-installed applications here.

Mediatek’s range of low cost, high performance chipsets has facilitated the creation of this entry level phablet range of Android smartphones. The Spice Stellar Virtuoso Mi495 powered by the MediaTek MT6577 processor paired with a PowerVR SGX 531 GPU, the Spice Stellar Mi495 packs a lot of punch for the price. The 512MB RAM might prove to be disappointing for heavy multitaskers. 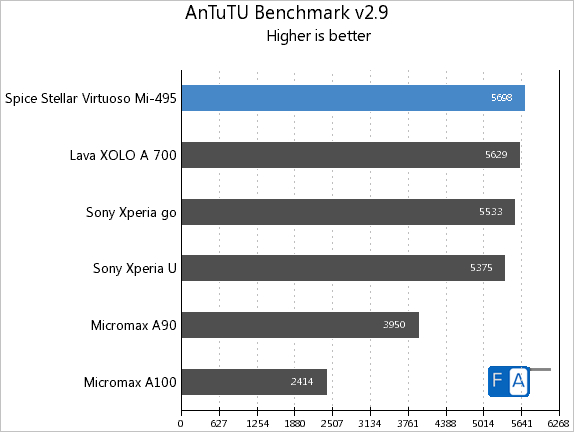 The phone keeps well with other phones of its class in terms of benchmarks. As we see above, in the Antutu benchmark the phone is placed equivalent to and even higher than several of its competitors. 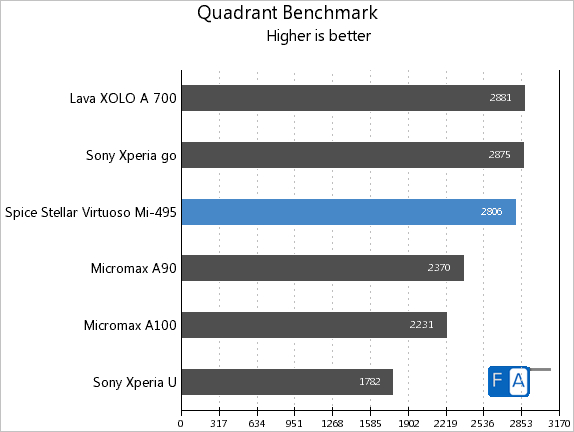 Similarly in the popular Quadrant benchmark which stress tests the CPU, performance figures come very close to that of the competition. Benchmark figures tell only half the story as real life usability can vary quite a bit. Thankfully Spice has delivered with the Mi495. The phone is very well optimized and flies through menu screens and while multitasking. It could keep up with practically everything we threw at it.

Miscellaneous
Spice bundles the handset with a free leather cover valued at Rs.1000 alongside the scratch guard. There’s also a cleaning cloth included in the package. 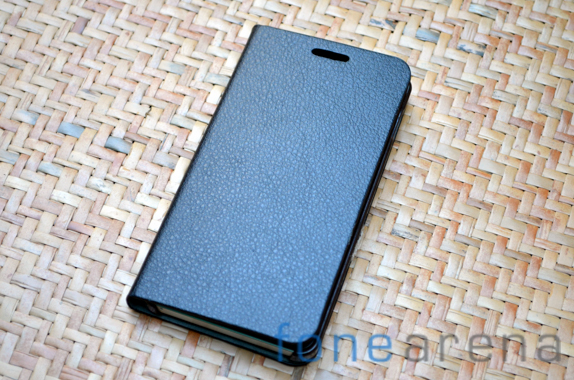 A nice addition, it should protect the handset from scratches and light bumps without getting in the way.

Conclusion
The Spice Stellar Virtuoso Mi495 provides a lot of value for the money with its impressive spec sheet and a focus on build quality. Available at a price point of Rs. 10,499 we feel that the handset is a great buy for the budget minded smartphone buyer. 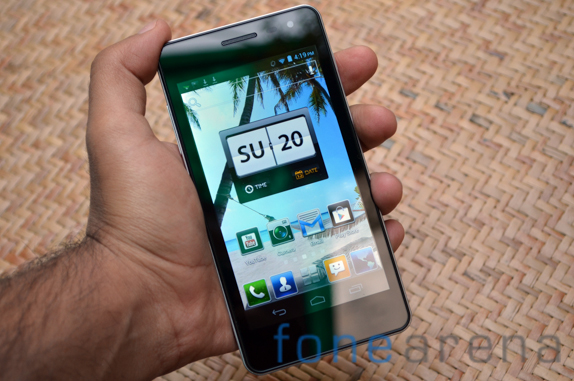