One of the first phones to roll out in the market running the long awaited Windows Phone 8 operating system, the HTC Windows Phone 8X is being dubbed as a signature Windows Phone device. Meant to provide an experience tailor-made for the tiled UI, the 8X marries exquisite design with what might just be the third ecosystem we’ve all been waiting for. 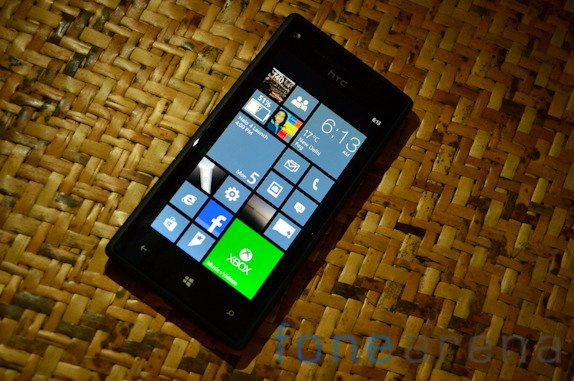 HTC has a long history with Microsoft being one of their biggest partners for Windows Mobile devices. Will they be able to recreate the magic here with their first Windows Phone 8 device ? Read on to find out more.

The HTC Windows Phone 8X is gorgeous. There are no two thoughts about that. The angular lines with curved edges result in a very unique feel in the hand. While the press images made it appear similar to Nokia’s Lumia phones, the device looks absolutely nothing like it in real. Like all unibody devices, the 8X too has a sealed in 1800mAh battery and is equipped with just 16GB of memory and no expansion slot. The phone is available in a range of colors including black, red, yellow and blue. The blue was perhaps our favorite though we’ll be reviewing the black variant here. The device is finished in a soft touch polycarbonate material which feels absolutely wonderful in the hand. This is hands down one of the most beautiful devices we’ve held. 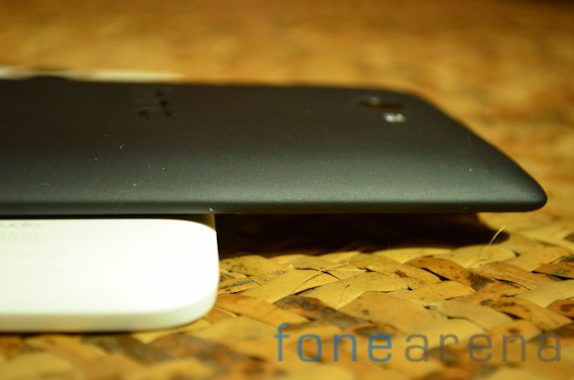 The phone is equipped with a 4.3″ display which makes it one of the most compact flagship level devices in recent times. The phone feels comfortable to hold for the most part though the edges might feel a tab bit too sharp for some users. The device is fairly light at 130gms. HTC has done a great job at hiding its 10.1mm profile by using tapered edges which make the phone look thinner than it actually is. 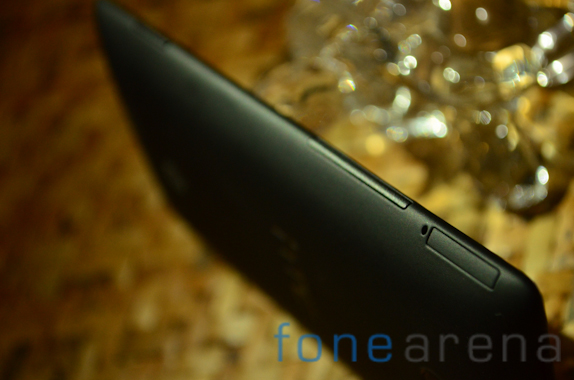 The right side of the phone has a volume rocker and the camera key required on every windows phone device. The left is clean and bereft of any ports or buttons. Above the volume rocker is the microSIM slot. 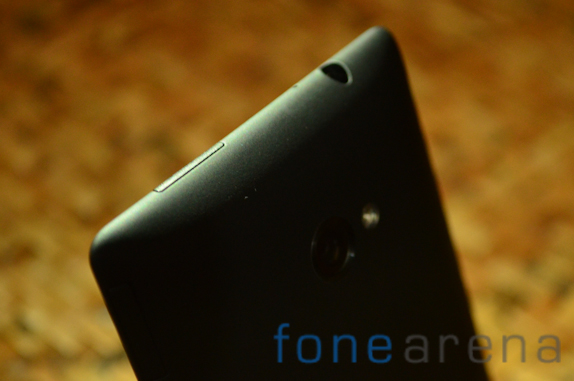 The top of the device has the 3.5mm jack alongside a power key. The power key is absolutely flush with the device and we kept having to fumble around with it especially in the dark. We would have most definitely preferred a bit more tactile feedback here. 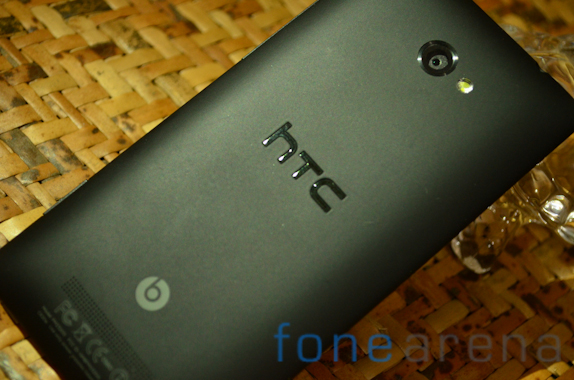 Over at the back of the device we have an 8MP camera surrounded by an anodized aluminum ring. It is flanked by an LED flash on the right.  An HTC logo is embossed in a shiny finish right in the middle and looks really classy contrasting with the matte finish on the rest of the back. The Beats logo is prominently placed in the lower half of the phone below which is a machined grille for the speaker. 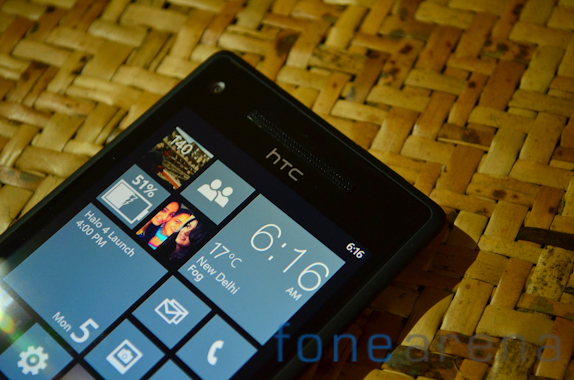 The front of the phone is covered by Gorilla Glass which gently tapers at the edges and blends into the polycarbonate design. Three capacitive buttons can be found below the screen corresponding for back, Windows key and search. Over at the top we have an 88 degree wide angle 2.1 MP front camera. A machined earpiece grille can be seen at the top and below it is a silver HTC logo. All in all a very well built phone with a gorgeous design. A notification LED is hidden away below the grille. 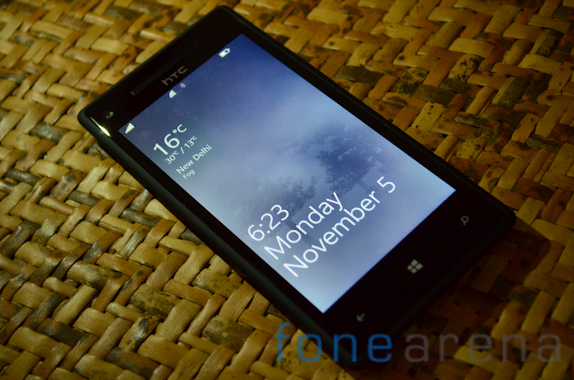 The screen is a 4.3″ 720p panel resulting in a ppi of 342. It is nigh impossible to spot pixels on the excellent Super LCD 2 screen. Viewing angles are good but not as great as HTC’s own One X. Audio quality from the dedicated amplifier on the 8X is very good. The loudspeaker outputs clear and loud audio but bass is lacking as expected. Audio output from the headphone jack is excellent.

Performance has never been an issue for Windows Phone 7 based devices and the 8X continues the tradition by being speedy across the board. UI runs at a slick 60FPS with nary a hint of lag. Application start up time has been dramatically reduced thanks to the dual core 1.5Ghz Snapdragon S4 chip in the 8X. This coupled with 1GB of RAM means that the phone has more than enough headroom to perform even the most demanding of activities without breaking a sweat. 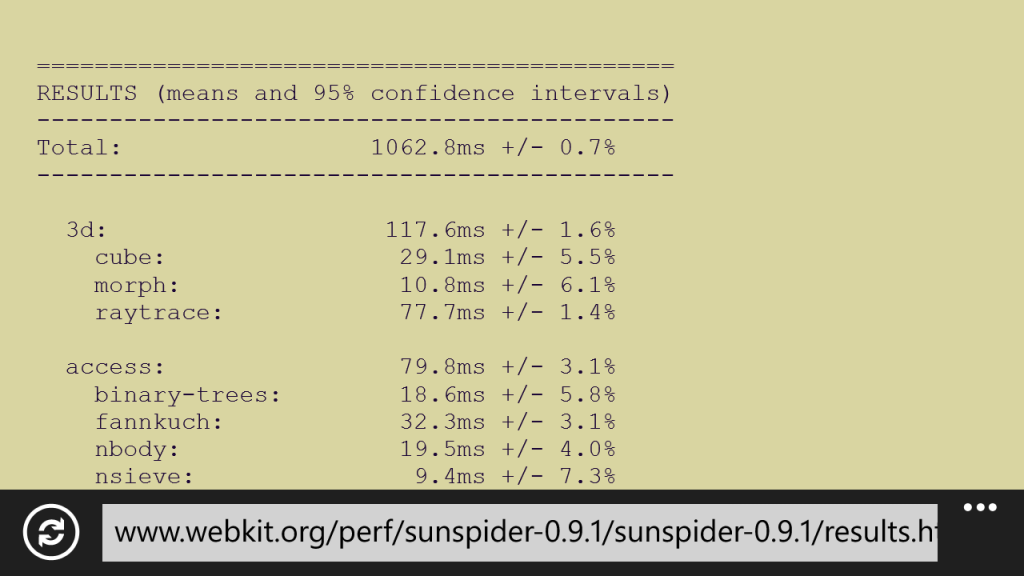 None of the popular benchmarking apps have been updated for Windows Phone 8 yet so it wouldn’t be fare judging performance based on those numbers. Sunspider, the browser based benchmark, however delivers a rather spectacular score of 1062 which is one of the lowest we’ve seen yet. It compares favorably to its competitors and represents a massive improvement over WP7 based devices.

We are very satisfied with the battery life on the 8X. The phone regularly lasts well over a work day. Between software optimization and the generally battery efficient Snapdragon S4 SoC, you won’t be left rushing to find a charging spot with the 8X.

We’ve already done an extensive review of Windows Phone 8 and you can read more about that here. With the 8X you enjoy what is essentially a stock Windows Phone experience on your device for the most part. HTC has a suite of applications available in a separate hub on the Windows Phone store. This includes  a flash light app and a HTC Hub amongst others. 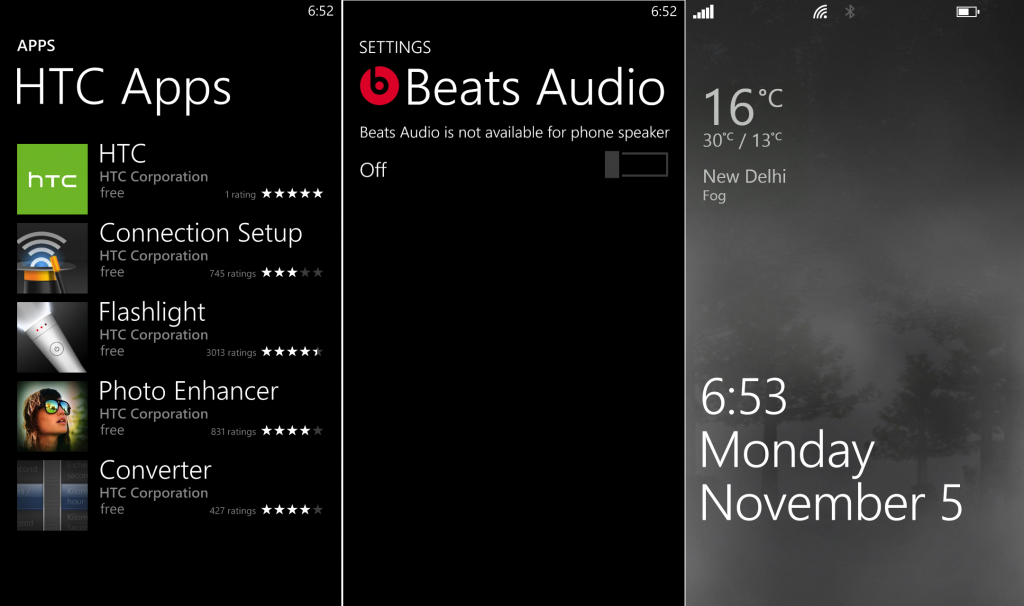 The HTC Hub is interesting as it highlights several capabilities of Windows Phone 8. The tile on the homescreen is live and displays time and weather information in real time. This is in contrast to Windows Phone 7 where tiles could only update every 30 minutes. Additionally it ties in to the lock screen and displays weather information using graphics. Nifty. Beats audio is integrated right into the OS via a toggle letting you switch it on if you so wish.

Camera
The camera on the 8X is the same unit as the one on the One X. The 8MP BSI sensor is paired with an f2.0 wide angle lens. The interface is bare bones and lacks many of the capabilities found on HTC’s Android devices like HDR and Panorama modes. 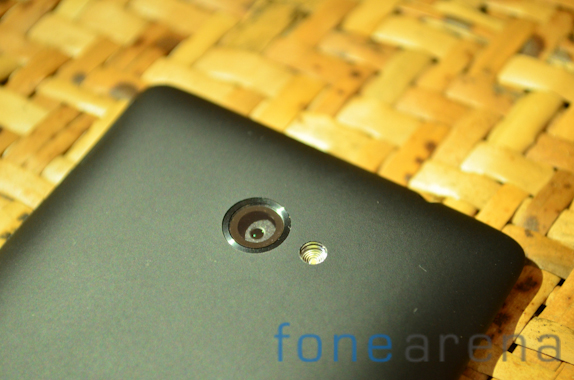 Only Bing Vision is available as a lens at the moment as part of the new camera software found in Windows Phone 8. We hope that HTC works to bridge this gap in functionality sooner rather than later. 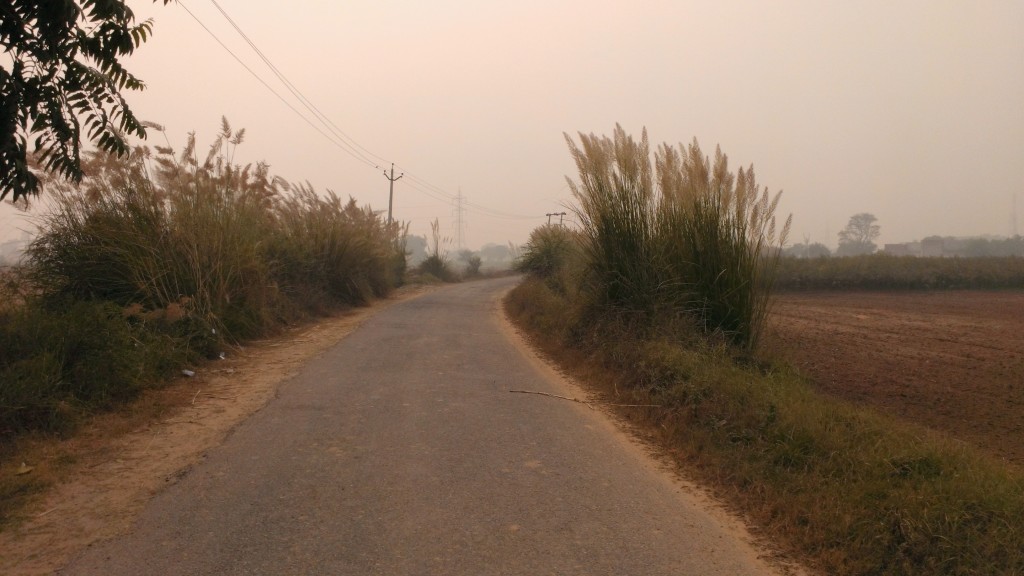 Image quality as such is quite good. Exposure levels are perfect most of the times and the camera is quick to capture the subject.   We did face some white balance related issues but it wasn’t common enough to be a recurring issue. 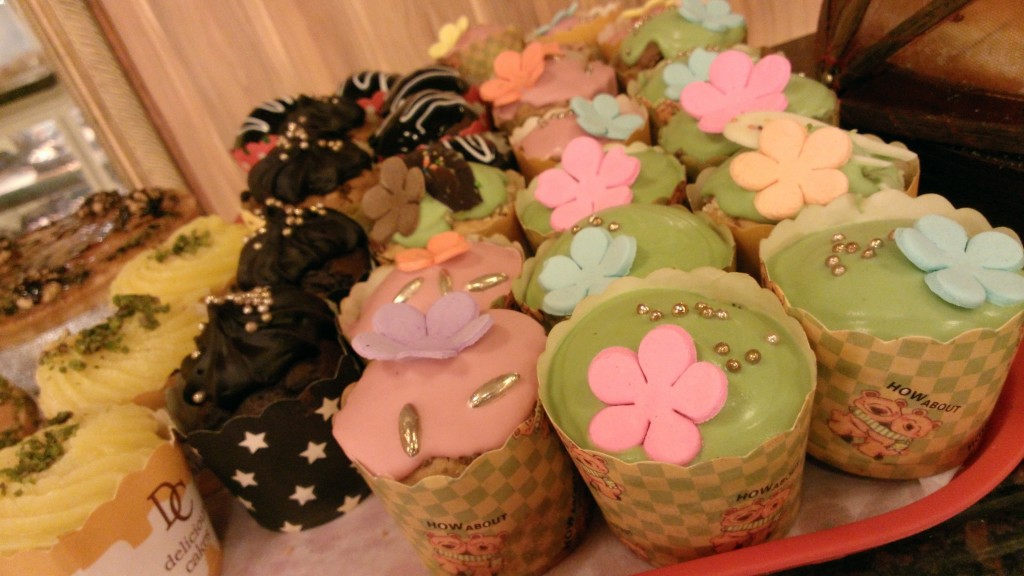 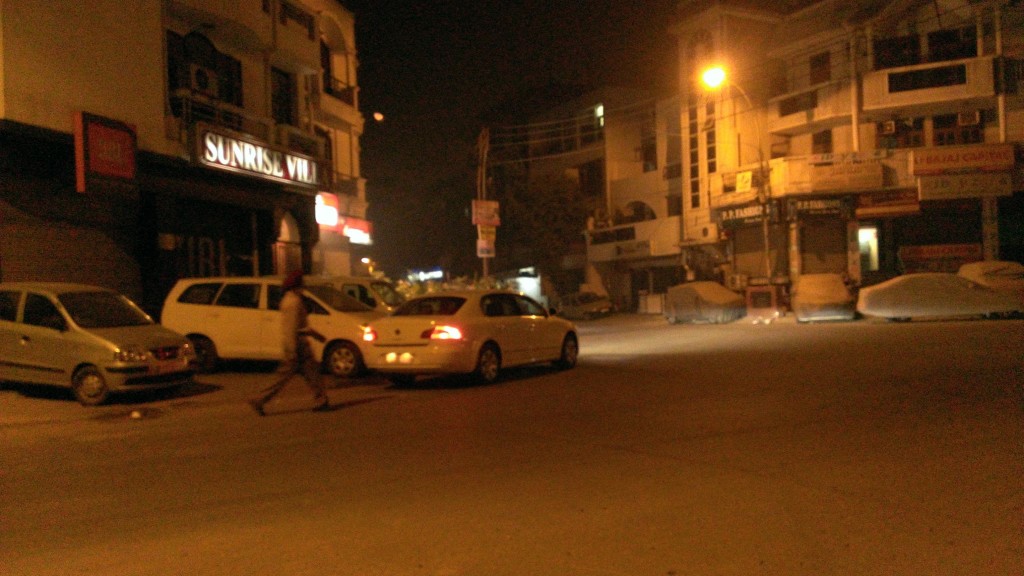 Autofocus in low light however was mostly a miss and noise levels were particularly high. The f2.0 lens definitely helps low light image quality but the noise levels are still way too high. Video is recorded at 1080p 30FPS with mono audio. In our tests, the video bitrate however around 20mbps. 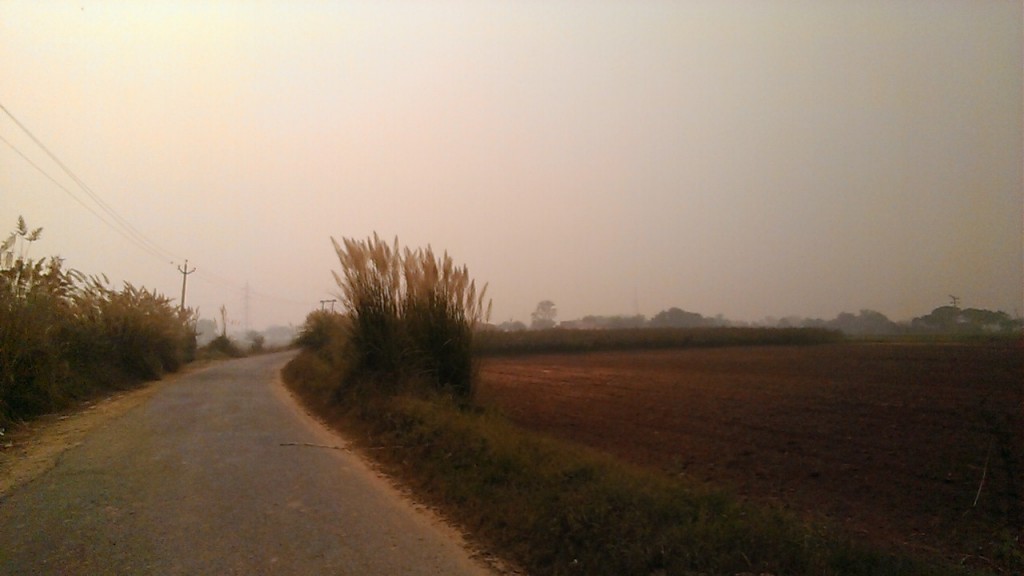 HTC has done a lot of work on the front facing camera and it is certainly one of better ones we’ve tried out. Thanks to an 88 degree wide angle lens, it is extremely easy to do a group video chat or take a group photo with the front camera. The front camera is a 2MP unit. The above shot was taken with the front facing camera.
Video Overview
Here’s a video overview of the HTC 8X where we talk about some of the features in the phone.
httpv://www.youtube.com/watch?v=lZB6i-xHZnw
Conclusion
HTC calls the 8X a signature Windows Phone device and after using it over the course of several days, we’re inclined to believe them. The angular design goes well with the tiled operating system and the size feels absolutely perfect. Great performance and an above average camera help provide a very compelling package. 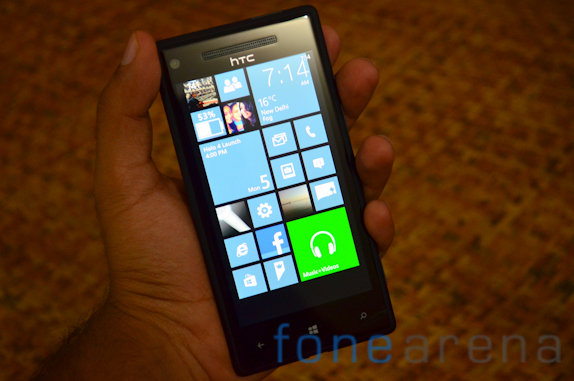 We feel that HTC has succeeded in providing top range specifications in a diminutive package running a very promising OS and we definitely like what we see here.
Pros
Cons