The Xperia U marks the lower end of Sony’s NXT range of devices. Following on the heels of devices like the Xperia S and P, the Xperia U is Sony’s newest entrant to compete in the lower mid-range Android device segment similar to the HTC One V. 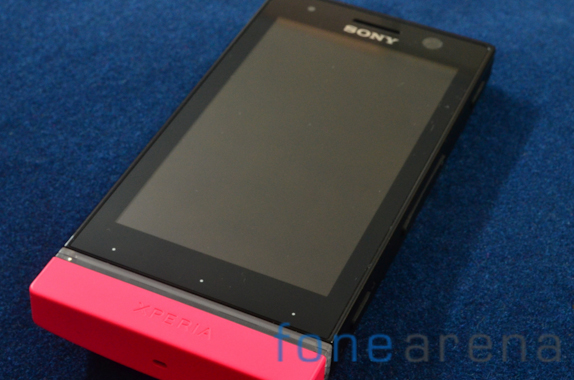 Taking hardware cues from the higher end Xperia P and combining it with a very unique design, the Xperia U has all the makings to be a successful, youth centric device. Read on to find out if it manages to impress.
Hardware
Sony’s NXT line of phones have shared a common design identity with minor variations across the range. Starting with the 4.3″ Xperia S, the design was greatly refined for the Xperia P. The U generally sticks to the formula but shrinking the display down means that some of the design principles are lost in the transition. 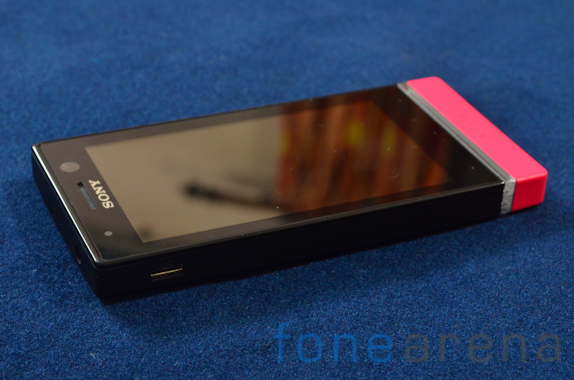 The phone is generally good to look at and the soft touch plastic feels great in the hand. The rubberized back goes a long way in making the phone feel like a premium product. The 110g weight means that you hardly notice the phone in your pocket. The phone feels reassuringly good in terms of hardware quality. 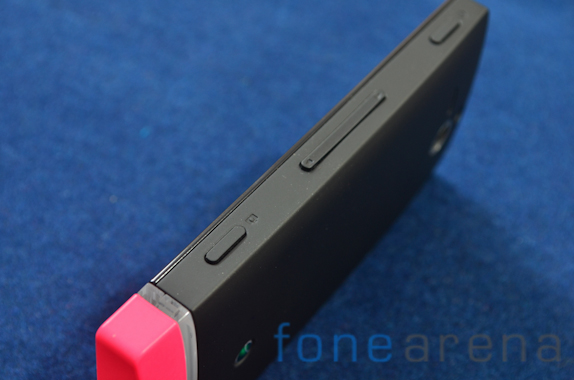 On the right hand side you can spot the power, camera keys and volume rocker. The power button gives a reassuring click on pressing. The camera key on the other hand required more pressure than should be necessary for the second click. This made clicking photos one handed a chore and we just ended up using the on screen key. 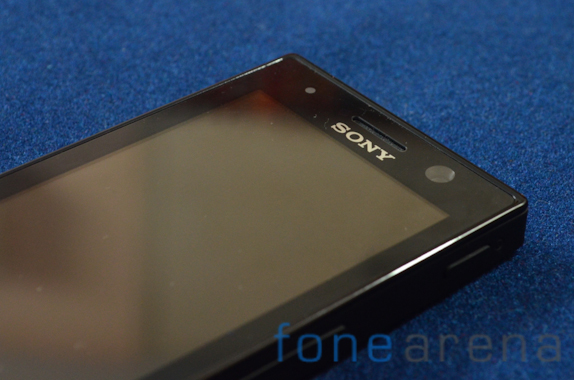 For a budget device, the Xperia U looks surprisingly good even with the display switched off. The transparent band and design details coupled with neat curves around the back go a long way in making the phone look desirable. The screen is a 3.5″ LCD panel with WVGA resolution. The color reproduction is quite good and the display is bright enough to be viewable even in sunlight. A speaker grille can be found at the top of the phone above the Sony logo. A front facing camera and ambient light sensor is also located up top. 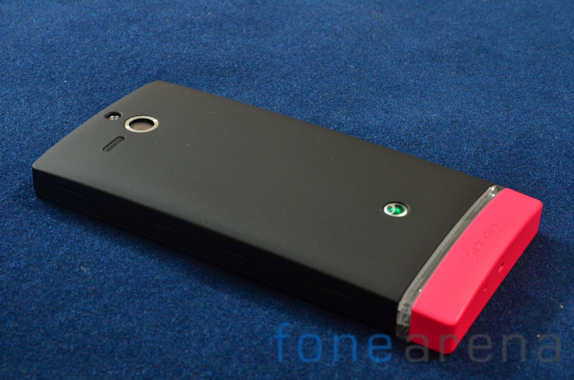 The back cover of the phone slides off to reveal a 1320mAh battery which lets the phone last through a work day with a bit of juice left over. The phone lacks a microSD slot and with just 4GB of internal storage on offer, this could be a dealbreaker for some. Something which we found a bit irritating was that the icons for back, home and menu on the transparent band don’t actually do anything. 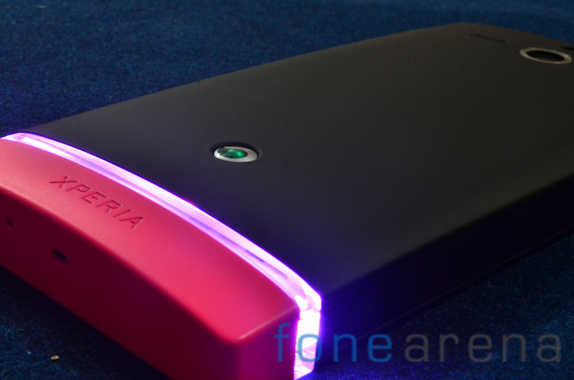 The real buttons are placed half an inch above the band in the form of silver dots on the phone. This can be very disorienting for the average user and given that Sony has managed to make the transparent icons functional on the Xperia P, we just don’t see the reasoning here.
A plastic segment can be found below the transparent bar which has an Xperia logo etched on it. This is a removable cap and an additional one is bundled in the box. 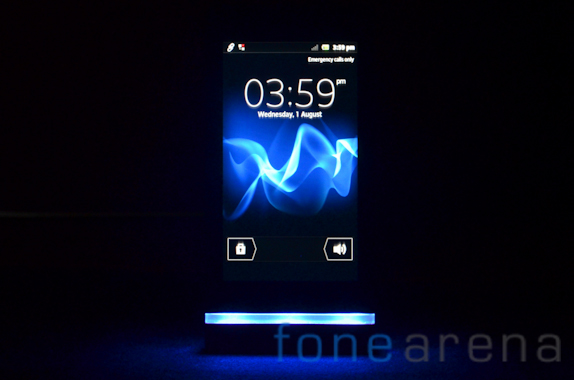 Switching on the phone results in a brilliant display of color thanks to the LEDs in the transparent bar at the bottom of the phone. The LEDs glow in the same color as the preselected theme on the phone. Clearly this is not the phone for someone looking for an understated design. 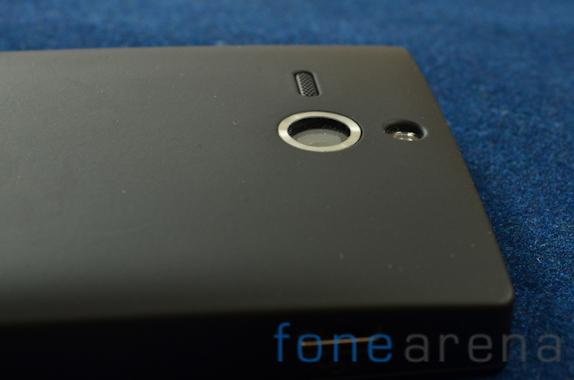 The back of the phone has the 5MP camera and LED flash. A loudspeaker is present next to the camera. The standard Sony logo is present at the bottom. The Xperia U is far from being the slimmest phone around but still feels quite good in the hand. The fact is that stuffing this level of tech inside a small phone like the Xperia U results in increasing dimensions in at least one direction.
Display
Sony has stuck a FWVGA panel (480×854) panel in the 3.5″ display which results in quite crisp graphics. The 280dpi is pretty good and colors are nice and vivid. Daylight visibility is great and so is the brightness. Viewing angles are above average. 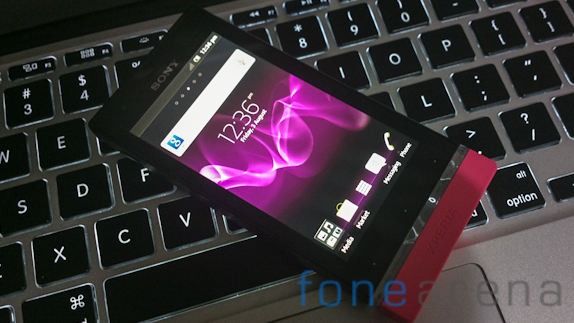 Our concern is more with the size of the display. The 16:9 ratio of the phone means that the screen feels smaller than it actually is. 16:9 ratios aren’t particularly good for typing and more so on a screen this small.
Cameras
The 5MP camera on the Xperia U is above average and produces results which are generally better than its competition. Photos in good lighting are passable but low light images suffer from excessive noise. 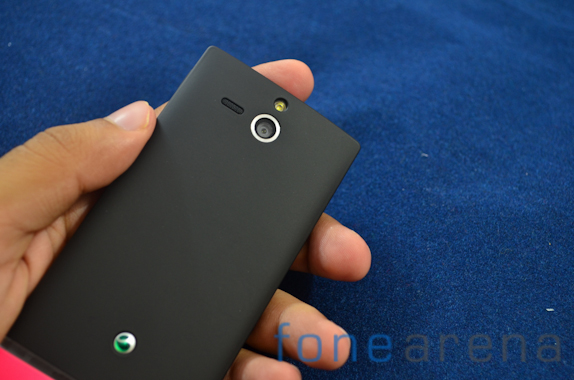 Close up shots are above average thanks to a bright flash. Auto focus is surprisingly quick and we much preferred shooting using the onscreen button than the camera key which was a bit too hard to press. 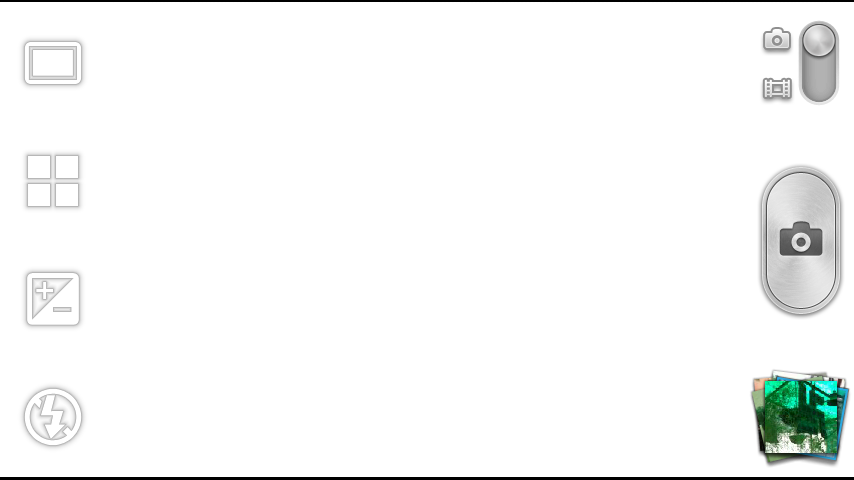 It is possible to adjust focus, exposure , white balance, ISO and geotagging.  You can launch the camera directly using the camera key even when the device is locked. 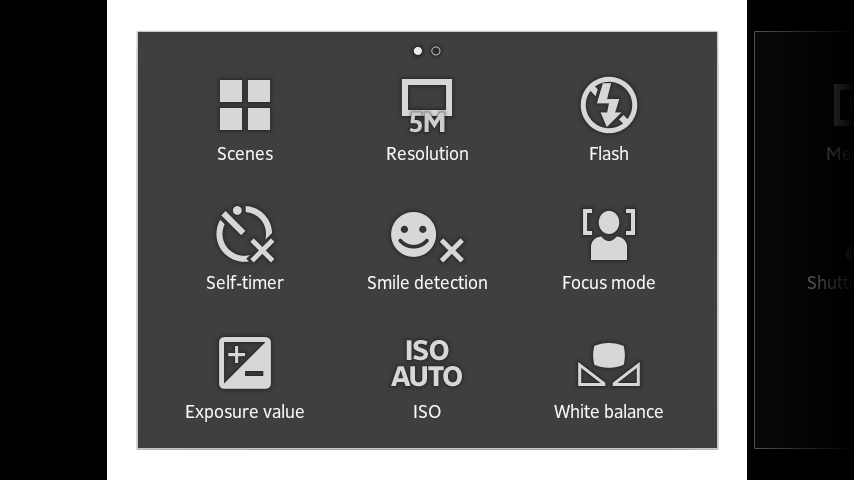 Identical to other Sony phones, the software suite offers manipulation of focus, white balance, ISO and geotagging. It is also possible to launch the camera software directly even when the phone is locked by directly pressing the camera key. 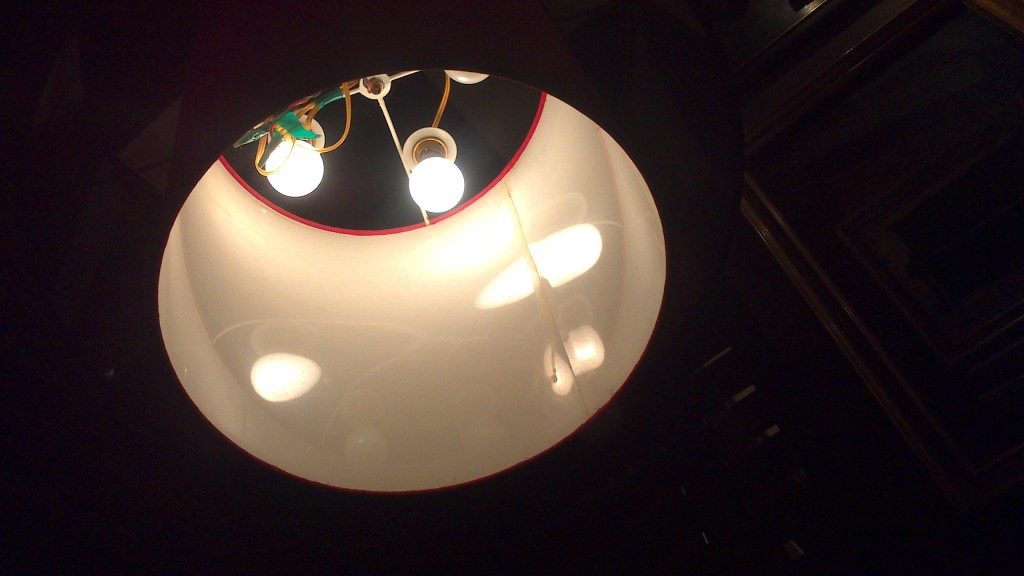 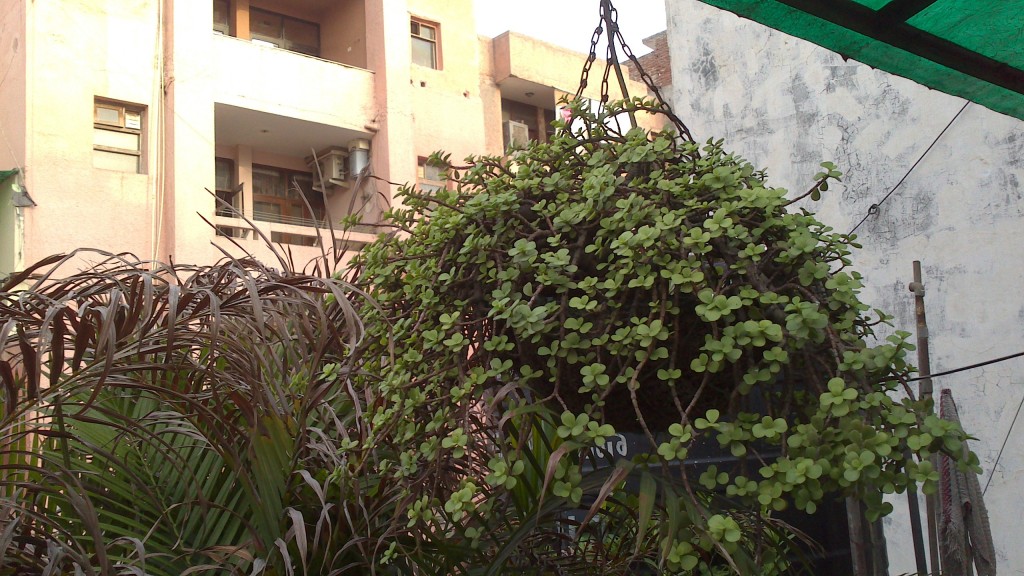 The camera is very quick at getting a focus lock and exposure is handled well.A front facing camera is also present for video calling. Overall the camera delivers usable shots for the most part.

The fact that Sony is still shipping phones with Gingerbread is downright shameful. That said, Sony has made some additions to the UI which go a long way in improving the user experience. 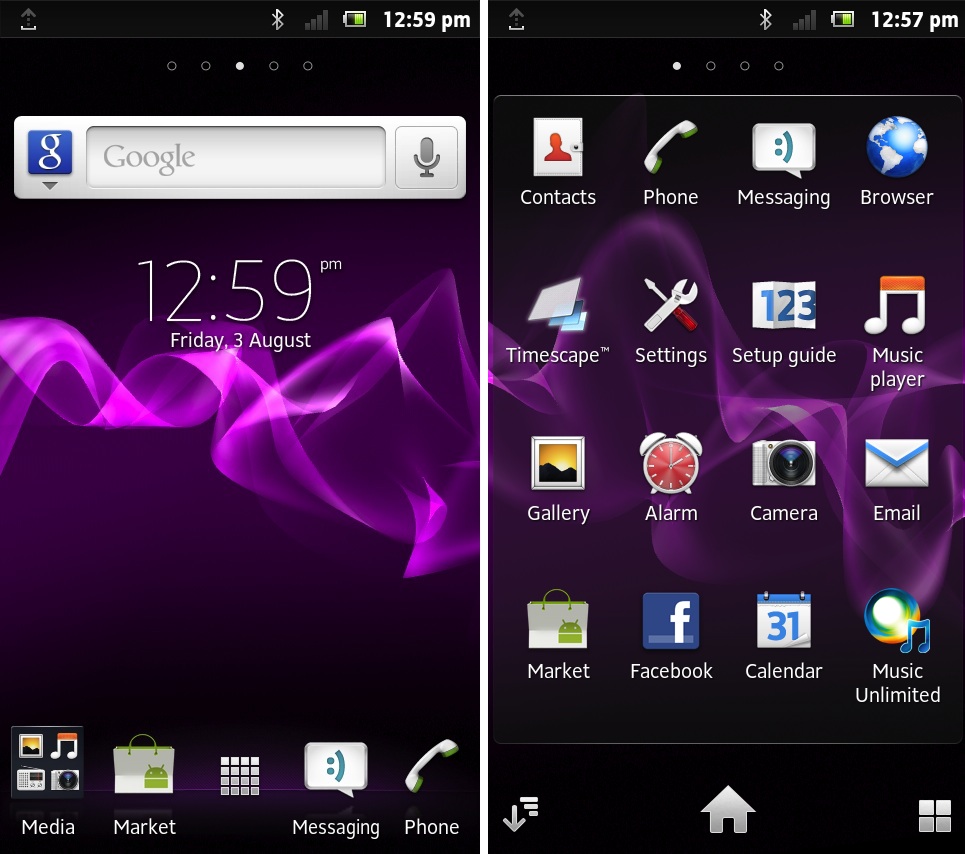 Timescape which is Sony’s social networking hub, is a nifty way to quickly glance at your social feeds. Track ID works exactly like Shazam and additionally there are apps for Music , Video Unlimited services for which you need to pay a subscription fee. There a good number of 3rd party apps and widgets included on the phone. All of these are removable. 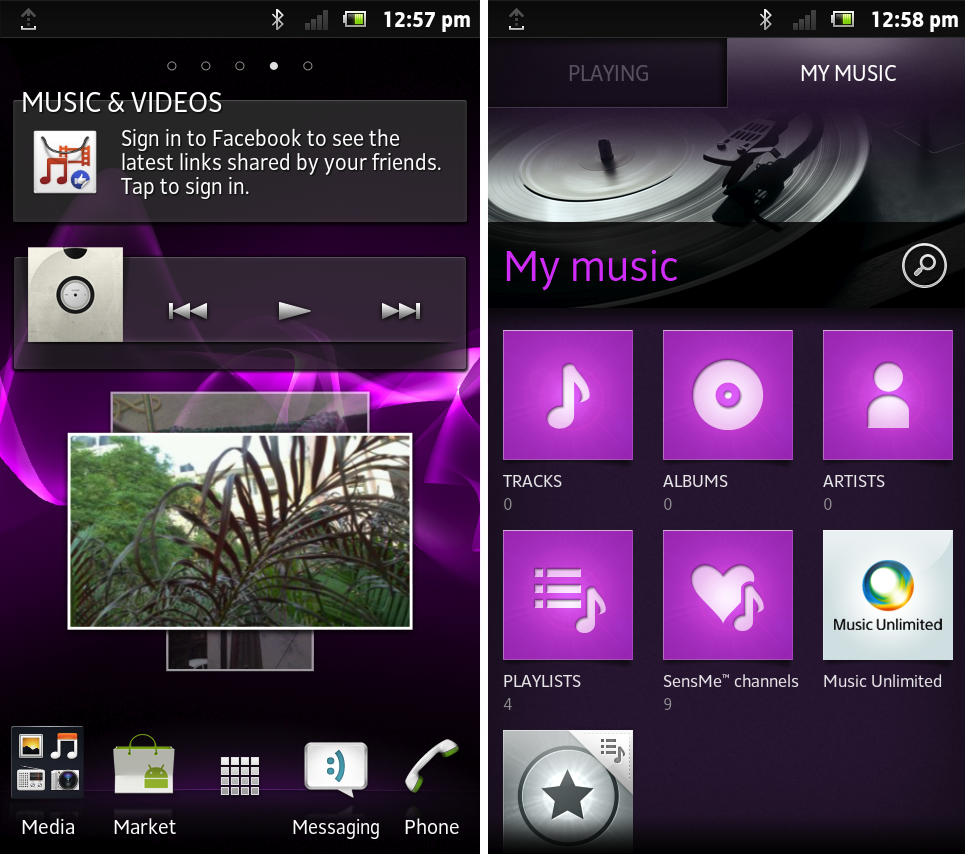 One of the coolest aspects of the phone has a corresponding software component working alongside. Changing the theme on the Xperia U not only changes the wallpaper, color of the menus but also changes the color of the LEDs in the transparent bar. 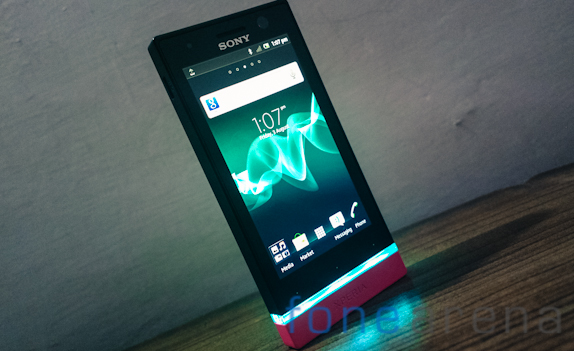 You can choose between the default Sapphire , Gold, Turquoise, Ruby, Amethyst, Emerald, and Silk. We’d have liked some additional control over the lighting.

Synthetic benchmarks do not tell the entire story about the performance of a phone but they do help us get some perspective. The Xperia U has some great specifications for a mid range device and performs quite well. Performance is lag free for the most part but placing a large number of widgets on the screen does tend to bog it down. 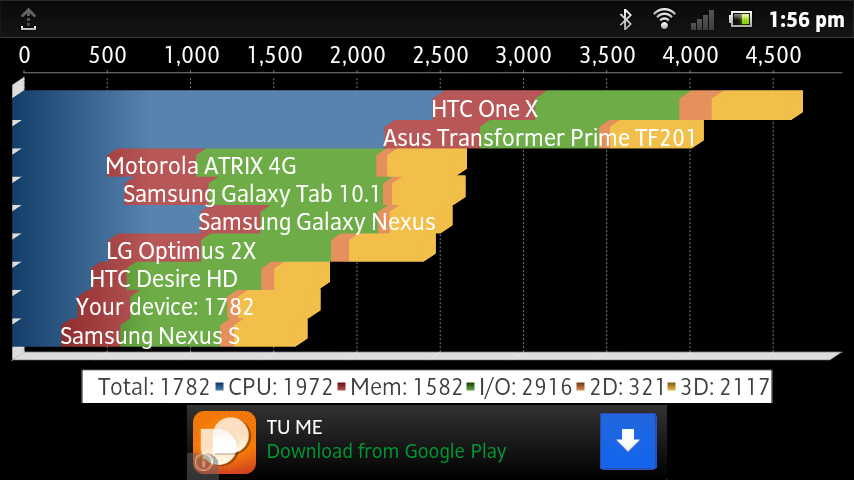 The 1GHz dual-core ST-Ericsson NovaThor U8500 processor and Mali-400 GPU go a long way in helping the Xperia U fairly well in Quadrant which measures CPU, I/O and GPU performance. 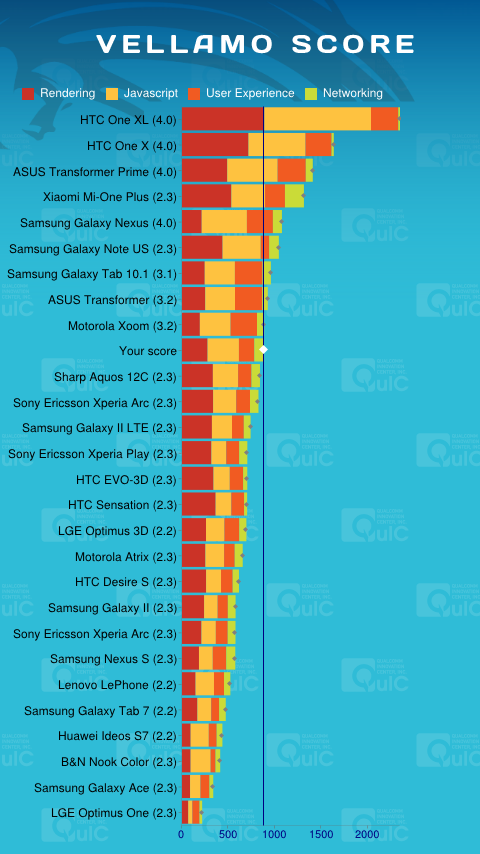 Web browsing on the phone is snappy and an enjoyable experience. This is echoed by the scores above which test browser performance and JavaScript, rendering. Gaming on the phone is generally very smooth thanks to the powerful GPU.

The Xperia U is powered by a 1320 mAh battery which when coupled with the relatively small 3.5″ display goes a long way in providing great battery life. The ST-Ericsson SoC barely sips power when on idle and this helps in stretching standby time to days. 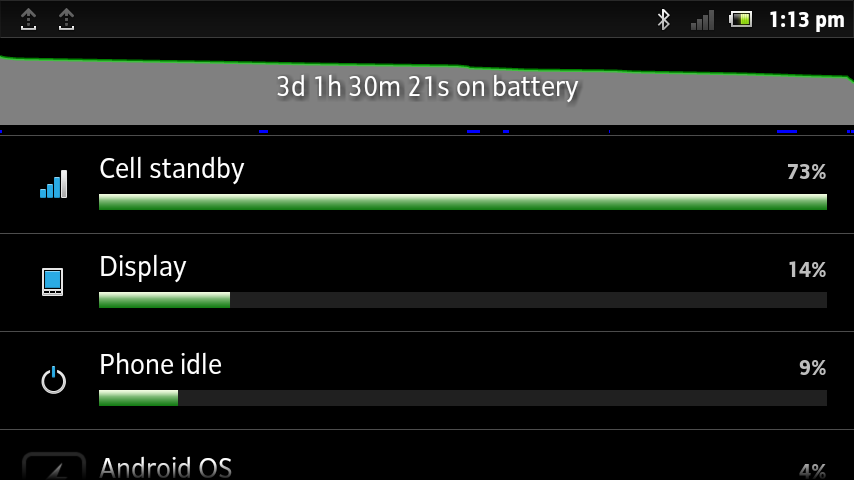 Even when stressed with constant browsing at 65% brightness, we could easily get close to 6 hours of battery life.

The Xperia U handily surpasses its competition but has some shortcomings due to which we can’t give it full marks. The 3.5″ display is particularly small and the 16:9 ratio of the screen makes it hard to type. If you can deal with that, the display quality is top-notch. 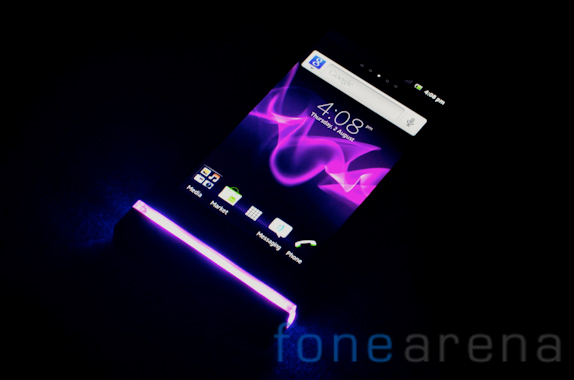 The design is great and while on the flamboyant side, the transparent bar with LED highlights definitely looks cool. At a price point of Rs 16,499, the Xperia U is  a really good buy. Recommended.