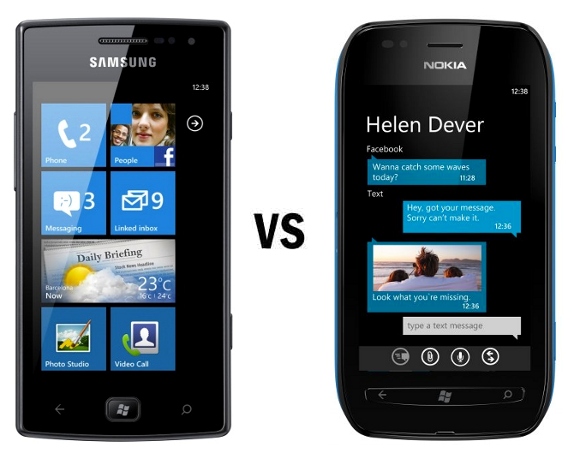 Here is the comparison between 2 latest Windows Phone Mango devices, Samsung Omnia W and the Nokia Lumia 710. The Samsung Omnia W is the Samsung’s latest Windows Phone device that was announced in September and they launched it in India in October. It packs in 1.4 GHz Processor and comes with a 3.7-inch WVGA(800X480 pixels ) Super AMOLED display. Nokia Lumia 710 is Nokia’s latest Windows Phone device that was announced in India in November. It comes with 3.7-inch (800 x 480 pixels) ClearBlack TFT display with Gorilla Glass and boasts 1.4 GHz Qualcomm Snapdragon Scorpion CPU and it also comes with swapable back covers. Let’s get into the specs comparison.

While looking at the specs, most of the features are similar but the Display and the battery differs. The display size is same but the Omnia W has AMOLED display and it is thinner at 10.7mm due to this while Lumia 710 comes with TFT display with Gorilla Glass and is 12.5mm thick. Omnia W comes with 1,500mAh and the Lumia 710 comes with 1300 mAh battery. Both these phones has removable battery. Unlike other Samsung Omia W is now available for pre-order in India and is expected to be available this month. Nokia Lumia 710 started shipping in Asia and Russia last week and is expected to be available in India this month.

Which Windows Phone are you planning to get? While thinking, check-out our hand-on images and video of the Samsung Omnia W and the Nokia Lumia 710.