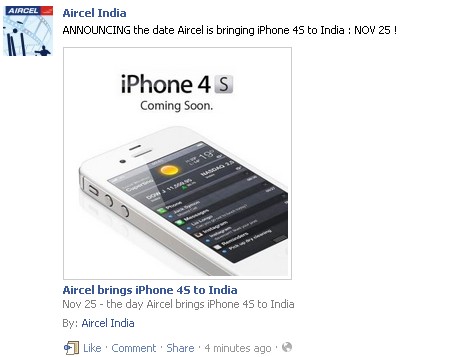 We guess Aircel (and Airtel) might announce their pricing ( and weird money back plans ) on the 25th. We don’t have any details about the pricing but should have some info soon. The iPhone 4S packs a Dual Core CPU , 8MP Camera with Full HD video recording and the interesting virtual assistant Siri. Looks wise its almost same as the previous iPhone – the iPhone 4. The device runs on iOS 5 which is the latest operating system for iPhone , iPad and iPod touch.

UPDATE :  Pre-booking for iPhone 4S starts on Nov 18th according to Aircel