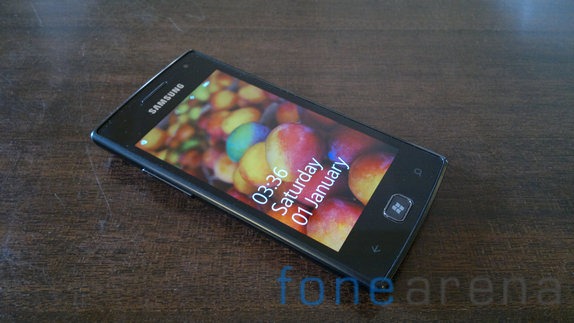 We already know that recently Samsung India has launched three new smartphones in 3 different platforms namely, Android, BADA and Windows Phone. We attended the launch event in Delhi and here are the hands-on photos of Samsung Omnia W. No doubt that major attraction was Samsung Omnia W which is first Windows Phone 7 Mango device launched in India. Omnia W is has been recently announced worldwide and thanks to Samsung India for launching in India so soon. It’s priced at Rs. 19990/- which is MRP in India. This is new 2011 series device from Samsung in Windows Phone series worldwide. Omnia W is powered by Qualcomm 8255T 1.4GHz SOC similar to Wave 3. It has 512MB RAM, 8GB on-board storage, 5MP AF camera with Led flash and 720p HD video recording. Similar to majority of WP devices Omnia W also lacks micro-SD card slot. The is first device to provide native UMTS Video Calling facility in entire Windows Phone series by partnered manufacturers including Samsung, HTC, etc. Omnia W provides a separate Video Calling application through which we can video call with anyone using 3G ready and Video Call capable phone in native UMTS mode. It has VGA front facing camera.

The display is 3.7” Super AMOLED WVGA which we found quite stunning but slightly less bright compared to Wave 3 (both at 100% brightness). This may be reason due to internal display tuning of Windows Phone 7 compared to BADA 2.0. The Omnia W was quite responsive and we found it was definitely faster than our HTC Mozart running WP7Mango, thanks to faster clocked CPU at 1.4GHz compared to older generation Qualcomm 8250 1GHz used in HTC Mozart.

Compared to Wave 3, Omnia W is not a unibody design but built entirely in plastic except the back panel. But still we found the build was quite stunning and it felt pretty lightweight in it’s small form factor. The back panel is not fully made of metal but almost 80% is metal and rest 20% is plastic which is with matt finish.

Samsung Omnia W is having 3.5mm jack at top, Micro-USB port at bottom for charging and sync with Zune. On right side we have power key on top which is also the lock key and Camera Shutter key at bottom. On left side there is only Volume Rocker key. At back side we have 5MP AF camera with it’s LED flash and speaker grill. We found that ringtones were quite loud in Omnia W which is good sign especially in India. Front is majorly dominated by display with 2 capacitive touch keys and one physical Windows key.

We will soon have complete review of Omnia W on FoneArena, till then enjoy these photos.