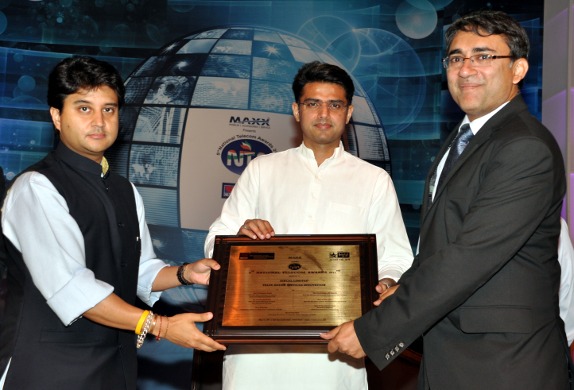 Aircel has been awarded for Innovation in Value Added Services (VAS) by Communications Multimedia and Infrastructure (CMAI) Association of India during the 5th National Telecom Awards 2011. Aircel tied up with Facebook earlier this year to offer new Value Added Service (VAS), that lets the customers to update their Facebook status by calling 51555 from their Aircel connection.

Other than updating the status, this also lets the users to listen, comment or like friend’s status update, find friends, get notifications and get anniversary and birthday alerts. Call to 51555 costs Rs 1 per minute that lets you record the status up to 30 seconds.

New Delhi, Tuesday, May 18, 2011: Aircel, a leading telecom player with pan-India operations and a subscriber base of over 55 million, introduces an innovative way to connect to your family and friends on Facebook, a social site with over 500 million users around the world, through the new Facebook Voice Updates on Aircel. Aircel was today honored for Innovation in VAS with the CMAI 5th National Telecom Award.

For the first time, Facebook Voice Updates on Aircel lets people connect to their family and friends on Facebook in their own voice, even without internet access on their mobile phones, which makes it an easy access for a large audience anytime anywhere. Moreover there is nothing like connecting in your very own voice which can express volumes where sometimes words fail…. One can now easily find and connect with new friends using Facebook Voice Updates on Aircel – creating a much richer Facebook experience on their mobile phones.

The product is easy-to-use – for example, to broadcast what you’re up to today, simply dial a short code to record your voice message, and post it as your status update on Facebook. Your friends will then receive an SMS alert about your new status update, to which they can reply with their own voice updates on Aircel.

This indeed opens a world of possibilities for all to connect, share, and socialize in a quick and more personal manner which spells efficiency as you multi-task your way through various activities during the day. Also, Facebook Voice Updates on Aircel does not require access to mobile internet, which makes it more user- friendly and provides larger access.

Mr. Gurdeep Singh, COO, Aircel said, “At Aircel it is our constant endeavor to Innovate and bring the best to the consumer which enables the consumer to better his lifestyle and live SMART. Convergence is the way forward as it opens a world of possibilities. Facebook Voice Updates on Aircel is a step in that direction which helps both the business community and the youth to connect efficiently, be it a celebration or an emergency. It is an honor indeed to be working with Facebook and making this possible for the very first time”.

Henri Moissinac, Head of Mobile Business at Facebook, said “Today, over 15 million people are actively using Facebook in India, where mobile devices are an important tool for Indians to stay connected to the people and things most important to them. This collaboration with Aircel will offer an opportunity for our Indian users to easily connect and share with their friends on Facebook anytime, anywhere.”