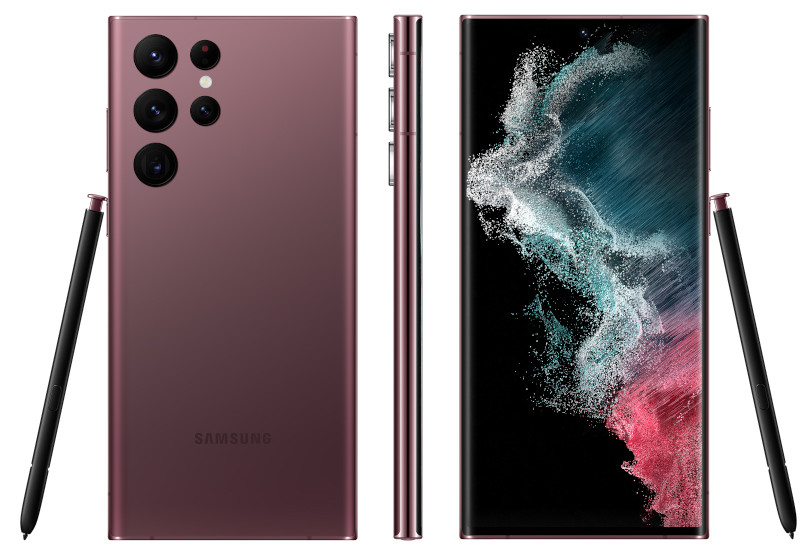 CAD-based renders of the upcoming Galaxy S22 Ultra surfaced in September, first live images of the phone surfaced in November, now the first press render of the phone has surfaced, thanks to @evleaks. This shows a curved screen with a centre punch-hole, quad rear cameras and an S Pen stylus bundled with the phone since this will be the first Galaxy S series phone with a built-in S Pen slot to replace the Galaxy Note series.

According to earlier rumours, this will feature a 6.8-inch curved Quad HD+ Adaptive 120Hz refresh rate screen. The phone is expected to be powered by Exynos 2200 or Snapdragon 8 Gen 1 SoCs, depending on the market. We can expect 12GB + 256GB, 12GB + 512GB and 16GB RAM with 1TB versions for the first time.

The phone is said to feature a 108MP main camera, 12MP ultra-wide, 10MP 3X telephoto and a 10MP 10X telephoto camera, same as the predecessor.  It could pack a 5000mAh battery with support for 45W fast charging, wireless charging and reverse wireless charging.

The Samsung Galaxy S22 series is expected to come in White, Black, Burgundy, Green and Rose colours. It  is expected to be introduced at an unpacked event on February 8, 2022 along with S22 and S22+ with pre-orders starting on the same day. It is rumoured to go on sale globally from February 18, 2022.

Update: After the Burgundy, more renders of the Galaxy S22 Ultra in White, Black and Green have surfaced.