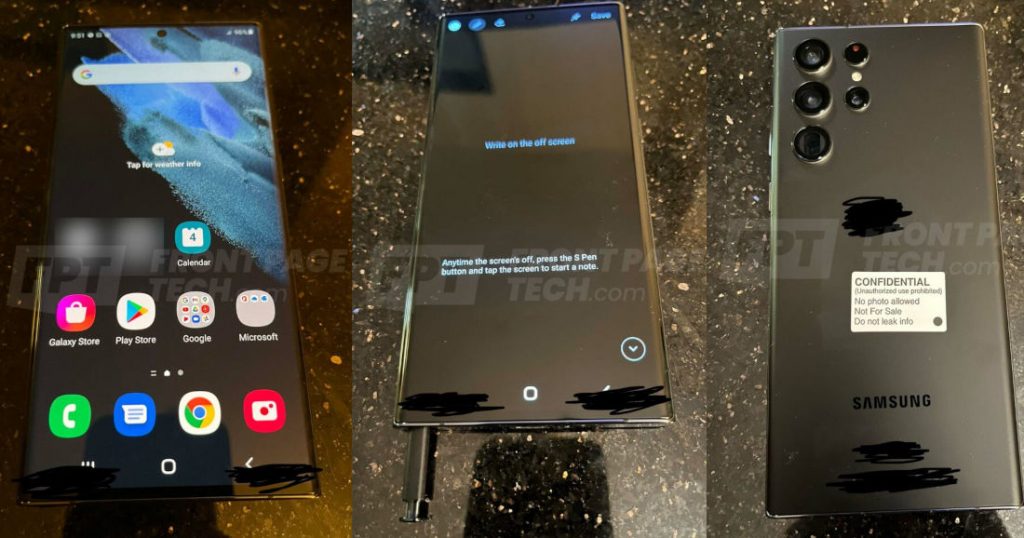 CAD-based renders of the upcoming Galaxy S22 Ultra surfaced in September, now the first live images of the phone has surfaced, thanks to  leaker Jon Prosser. Earlier renders revealed a pill-shaped rear camera module, but this is just plain, but the placement of the sensors and the flash are similar.

It is said to feature a 108MP main camera, 12MP ultra-wide, 10MP 3X telephoto and a 10MP 10X telephoto camera, same as the predecessor. The image also shows a curved screen with a centre punch-hole.

It shows a square design that resembles the Galaxy Note series, and as rumoured earlier, this shows a built-in S Pen slot for the first time in an S series phone, just like the Note series. According to earlier rumours, this has a 6.8-inch curved display, similar to the S21 Ultra. We can expect a similar Quad HD+ Adaptive 120Hz refresh rate screen

Earlier rumours revealed 163.2 x 77.9 x 8.9~10.5mm (including the camera bump) dimensions and 228 gram weight.  The phone is expected to be powered by Exynos 2200 or Snapdragon 898 SoCs depending on the market. The S22 is expected to come with Snapdragon SoC in India this time. It is said to pack a 5000mAh battery with 45W fast charging.

The leaker also said that the phone will be introduced at an unpacked event on February 8, 2022 along with S22 and S22+ with pre-orders starting on the same day. It is rumoured to go on sale globally from February 18, 2022. We should know more details about the S22 series in the coming months.