As far as the specifications, which you can see in the image above, it has 1 x ARM Cortex-X2 CPU clocked at 3.05GHz, 3x Cortex-A710 CPU clocked at 2.85GHz and the 4 x Cortex-A510 CPU cores are clocked at 1.8GHz. MediaTek says that this will offer over 35% performance leap over current generation Android Flagship chips, which could be Snapdragon 888, and also said that it will offer over 37% better efficiency. 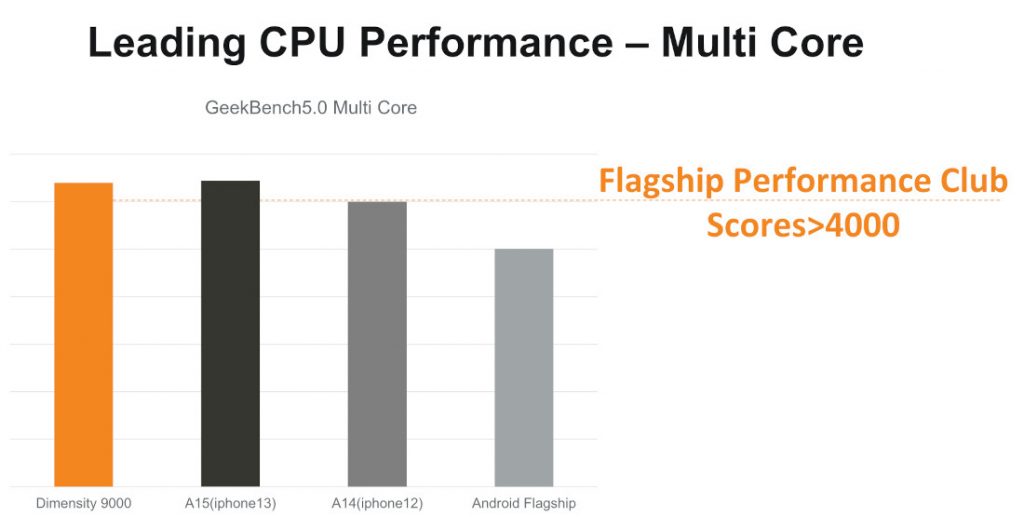 It said that SPECint2006 benchmark score is 35% more than the Android Flagship chip, while GeekBench 5 is 10.5% more over the competition.  The multicore performance exceeds current Android competition, will be on par with Apple’s A15 Bionic, says the company.

The 5th gen AI processing unit (APU) is 4 times more power-efficient than its predecessor and will power various AI experiences in camera, gaming, multimedia apps and more. In the ETHZ Ai Benchmark, it outperforms Google Pixel 6 and the Tensor SoC, says MediaTek

The Imagiq790 18-bit ISP with HDR is world’s first to support 320MP sensors. It has triple-camera operation which supports concurrent 32+32+32MP sensor operation, capable to simultaneously record 4K HDR video from three cameras. It has processing speeds of up to 9 gigapixels per second, 2x better than Dimensity 1200. In comparison, Qualcomm Snapdragon 888 supports 2.7GPixel/s. It also has a video night mode called “Super Night Video Recording”.

The modem supports 3CC carrier aggregation with up to 300MHz of Sub-6 bandwidth for download speeds of up to 7Gbps. It is compatible with 3GPP release 16, but it only supports sub-6 5G, and lack mmWave. In addition to Bluetooth 5.3, it has Wi-Fi 6E 2×2 (BW160), Wireless Stereo Audio and Beidou III-B1C GNSS support.

MediaTek Dimensity 9000-powered devices are expected in the first quarter of 2022.