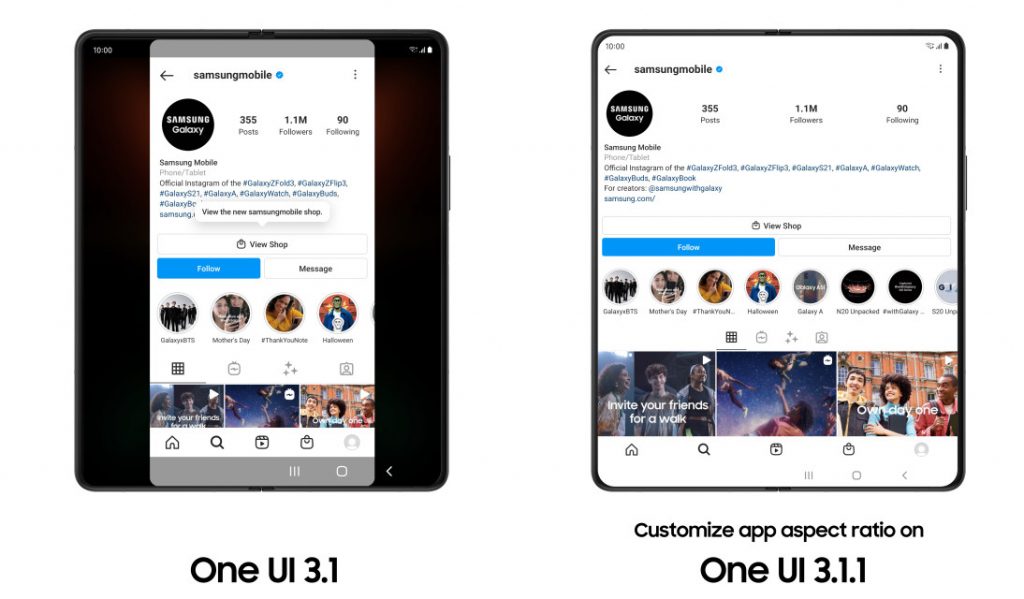 With Drag & Split, you no longer need to open up a new tab and switch back and forth constantly between windows. The feature lets you simply drag the link you want to check to the edge of your screen and open it in a new window to be viewed simultaneously. Drag & Split works with many of your favorite apps, including Samsung Internet, Samsung Notes, My Files, Messages, MS Office, OneNote, OneDrive and more.

Multi-Active Window lets you use up to three apps simultaneously on your screen, all arranged in your preferred layout. In One UI 3.1.1, you can also adjust both the height and the width of the app windows to suit your needs. Natural Window Switching makes transitions more responsive and intuitive. With One UI 3.1.1, the window you want to move will pop up when you press down on the top handle, making it easier for you to drag and drop the app to your desired location.

With the new Rotate All Apps feature, your apps will smoothly transition to the proper UX to match the portrait or landscape aspect ratio. When the feature is toggled on in ‘Labs’, even vertically fixed apps can be rotated 90 degrees. With customizable aspect ratios, you can maximize the benefits of your foldable smartphone’s Infinity Flex Display. One UI 3.1.1 now lets you change the size of the app so that you can fully immerse yourself in their photos and videos. To get the most out of Samsung’s expansive foldable displays, simply enable this feature in ‘Labs’.

When used with Messages, App Split View will show your message list on the left of the screen and your selected conversation on the right, allowing you to take in more information at a glance. A button at the top of the conversation can be clicked to expand it into full screen mode. For apps that do not come with built-in App Split View support, you can enable the function by turning it on in ‘Labs’.

With the new Flex mode panel, you can enjoy easier control of media while relaxing with your favorite TV shows at the end of a long day. For apps that don’t typically support Flex mode, you can now enable the feature by turning on Flex mode panel in ‘Labs’.

Designed to help you work more efficiently, Taskbar makes it possible for you to switch between apps without returning to the home screen or scrolling through the Recent tab. Taskbar pins the apps to the side of the Main Screen, where Edge Panel used to be located, giving you instant access to your favorite apps. Simply enable the feature in ‘Labs’ to make your workflow smoother.