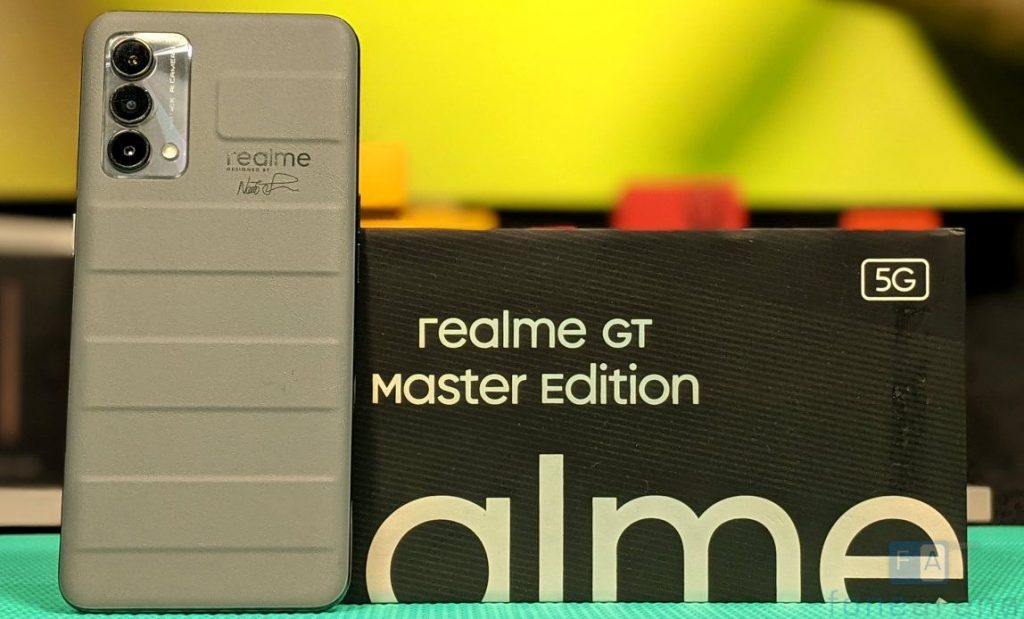 realme GT Master Edition was launched in India earlier this month. It retains the same display and the rear cameras from the realme GT, but replaces the Snapdragon 888 with the new Snapdragon 778G SoC, and comes at a cheaper price. This even lies in the same price range as the realme X7 Max, but the company is discontinuing  the realme X series in favor of the new GT series. Is this worth the price? Will the realme GT series be a good replacement to the realme X series? Let us dive into the review to find out. 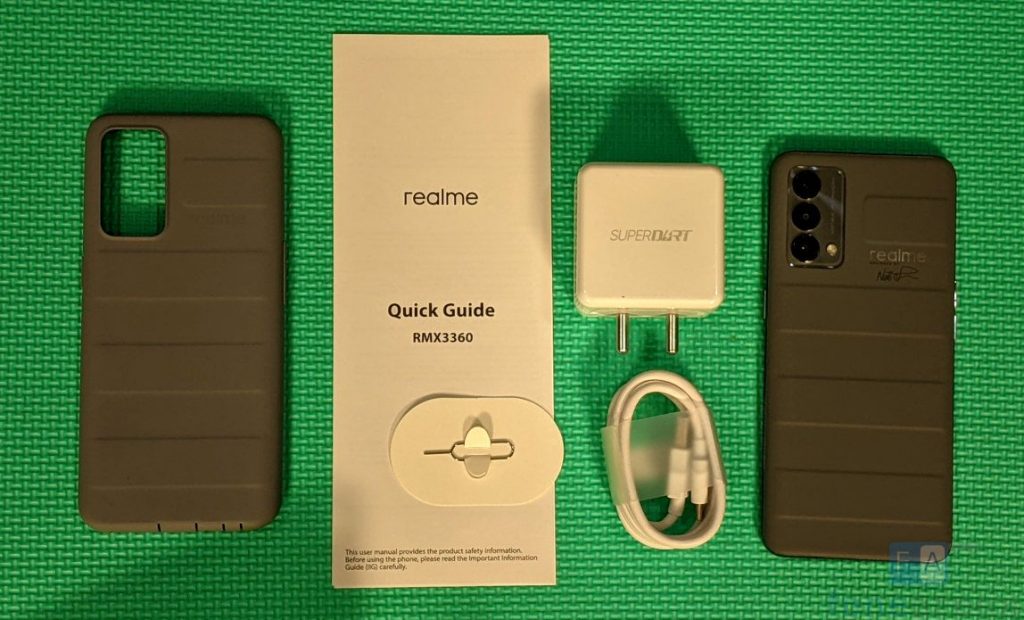 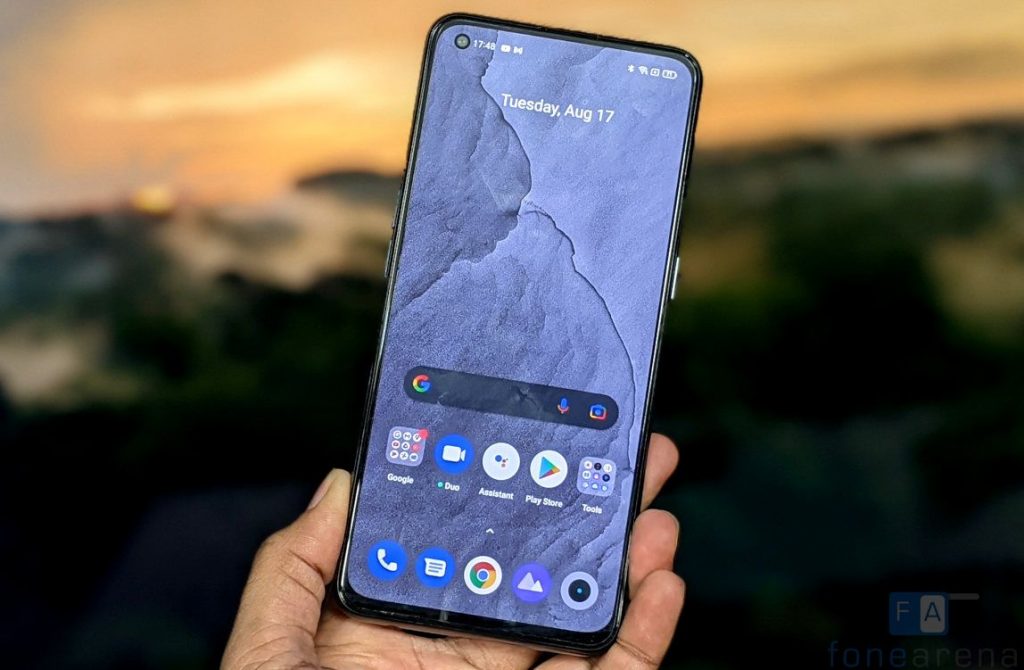 The realme GT Master Edition sports a 6.43-inch (1080 x 2400 pixels) Full HD+ 20:9 aspect ratio Fluid AMOLED display with 120Hz refresh rate, 360Hz touch sampling rate and 410 PPI, same as the realme X7 Max. The display is bright since it has up to 1000 nits brightness, offers good colour output since it has 100% DCI-P3 wide Colour Gamut and the sunlight legibility is good as well. You can select from vivo, Gentle and brilliant screen colour modes.

There is also DC dimming, but you need to enable it from the realme Labs. The 120Hz refresh rate and 360Hztouch sampling rate offers a buttery smooth user experience, especially when you are scrolling through the UI and when gaming. It can only automatically switch between 60Hz and 120Hz depending on the content if you set it to auto select, thus saving the battery life. You can also force it to 60Hz or 120Hz.

It also has HDR 10 support, which works for YouTube, but it doesn’t work with Netflix. You can enable bright HDR video mode, which increases the brightness when playing HDR videos, but it drains the battery quickly. The company doesn’t say if the screen has any kind of protection.

The phone doesn’t have a notification LED, but this has always-on-display, which is called ambient display that shows contextual info and notifications all day or as per schedule, and there is also edge light lighting that glows when you receive notifications. It doesn’t consume a lot of power since this is an AMOLED screen, but the company says that it increases the power consumption. 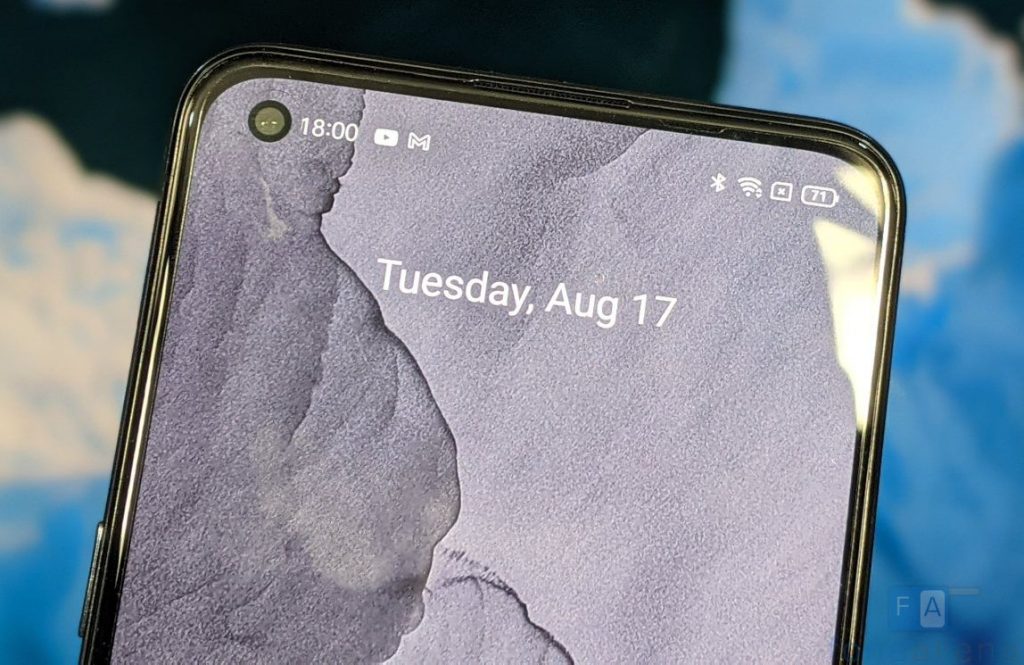 The phone has a tiny punch-hole on the left that houses a 32-megapixel camera with Sony IMX615 present is the same sensor that is used in the OnePlus Nord 2. Above the display, there is an earpiece on the top edge, but it doesn’t function as the secondary speaker. The phone also has the usual set of proximity and ambient light sensors, as well as a gyroscope and a magnetic sensor, otherwise known as a magnetometer. 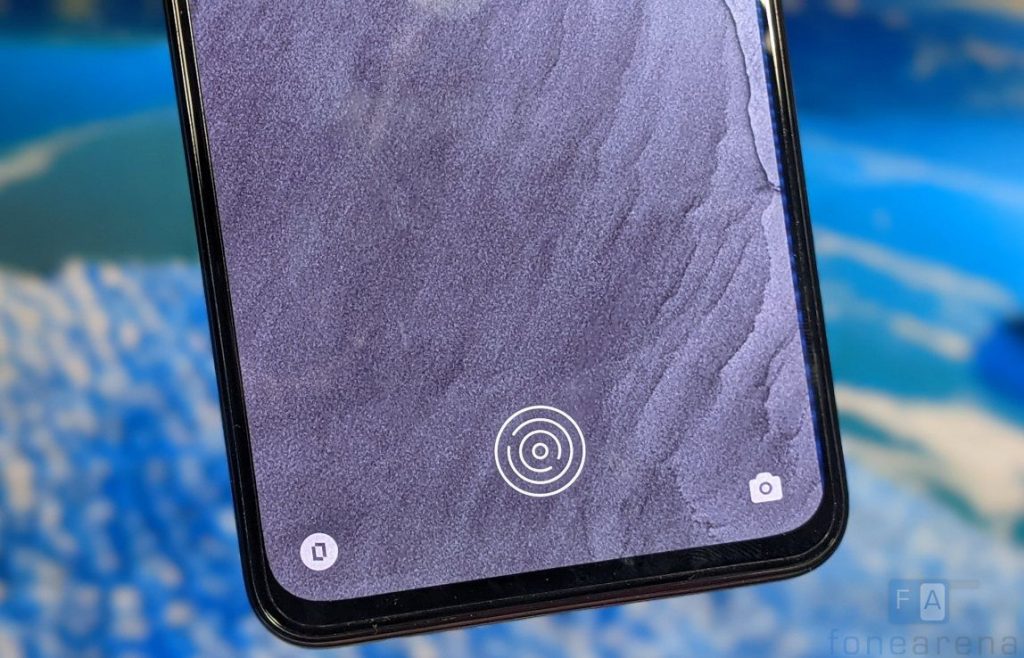 It has an in-display fingerprint scanner which is quick to unlock the phone immediately when you place your finger. You can also notice a small bezel below the screen. The haptic feedback is good as well, and the phone also offers 4D vibration when gaming. 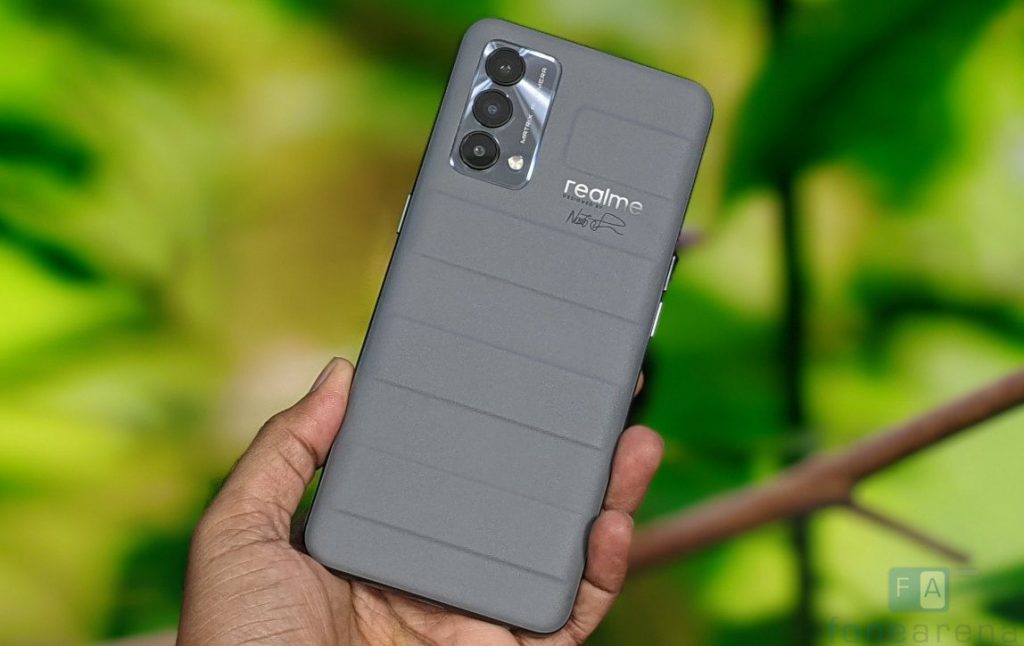 Even though this has a same 6.43-inch screen as the realme X7 Max, it measures 159.2×73.5×8mm almost same as the X7 Max, but it is 0.4mm slimmer. However, the Master Edition is 8.7mm thick and weighs 180 grams, slightly heavier than the standard Luna White and Cosmos Black versions what is 174 grams. 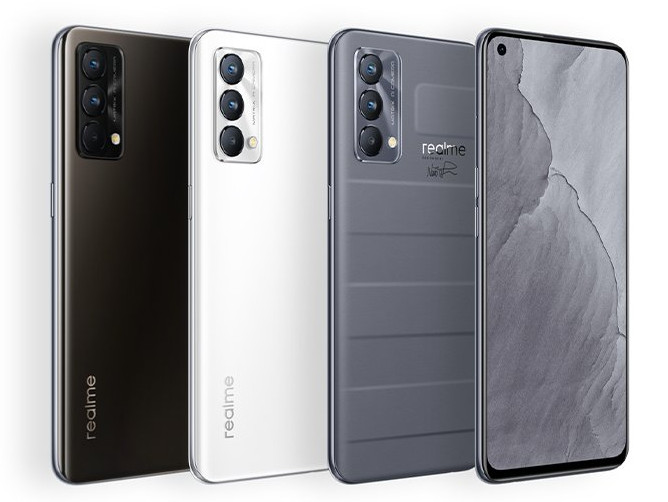 Coming to the design, the phone comes in two versions, one with a 3D glass back and the Voyager Grey version we have has a vegan leather design that concave vegan leather process. With a raised height difference of 0.3mm and a raised fence spacing of 18.8mm it replicates the horizontal grid of the suitcase on the back of the phone. The Master edition looks and feels good, even though this has a polycarbonate frame, but the standard Luna White and Cosmos Black version have a plastic back, so it doesn’t look premium. The phone just has a splash proof coating, and doesn’t have any IP ratings. 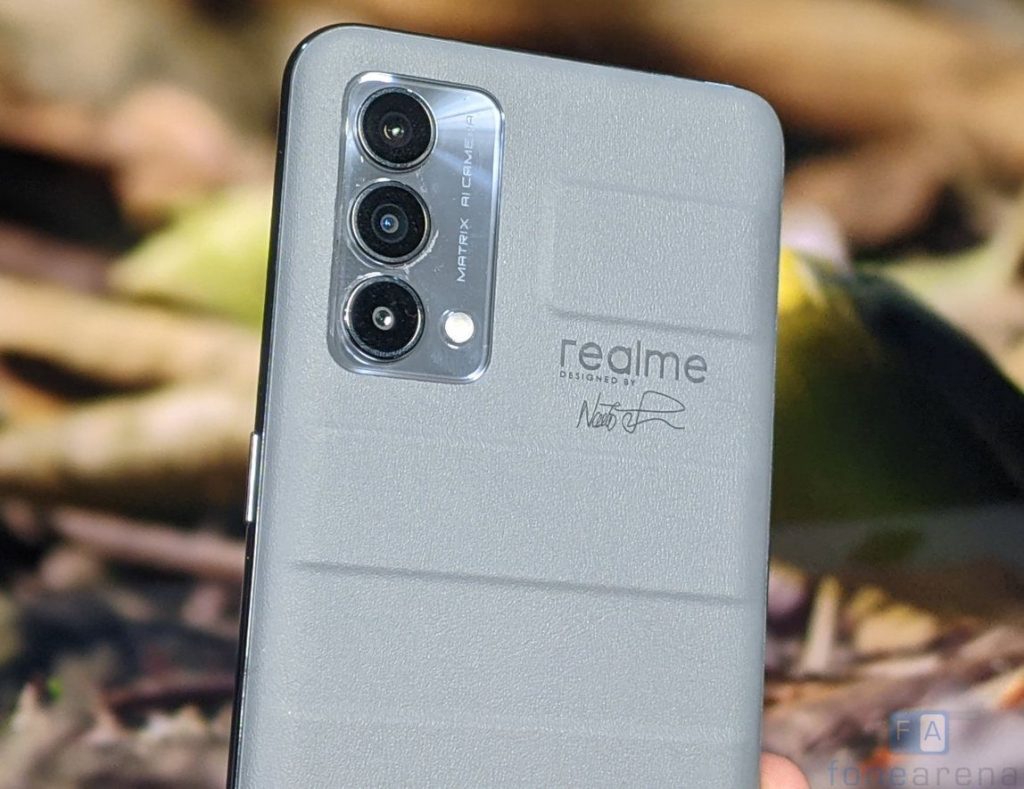 The camera UI is same as the one realme UI 2.0 phones that has features like dual video, AI color portrait and bokeh flare portrait for images. There is also Dynamic bokeh option for photos. For video, you only get AI color portrait. There is also AI option for video and Pro video in night mode. The rear camera offers 16MP output after pixel binning, and the front camera images are 32MP in size.

Daylight shots came out well, and the dynamic range is better with auto HDR. There is AI mode which recognizes different photo scenes and automatically adjusts camera settings to make boost the colours. 2X is decent, but once you zoom after that the quality degrades since it is digital zoom. The portrait mode is decent and the 2MP macro camera is useless, so better use 2X zoom with the normal camera.

The front camera is also good in daylight, and there is also HDR mode. The bokeh shots were decent, but the edge detection is not the best since it is just uses software.

It runs Android 11 with realme UI 2.0 on top, similar to latest realme phones. It has Android security patch for July. The company did not confirm the number of Android updates and security updates the phone will get, but it should get Android 12. A feature I like in the new realme phones is the DRE or dynamic RAM expansion feature, which uses the built-in storage as RAM. This has up to 5GB of additional RAM expansion.

Apart from the usual set of realme apps and Google apps, it comes with Amazon Shopping, Prime Video, Amazon Music, Booking.com, Dailyhunt, Josh, Facebook, Finshell Pay, LinkedIn, Netflix, Snapchat and Moj. Most apps can be uninstalled, but the Finsell Pay app can’t be uninstalled since it is a system app.

Out of 8GB LPDDR4x RAM, you get 7.8GB of usable RAM, and about 4GB of RAM is free when default apps are running in the background. Out of 256GB, you get about 225GB of free storage. The phone uses UFS 2.2 storage, and we got sequential read speeds of about 1022 MB/s which is less compared to UFS 3.1 that is used in most mid-range phones in the prices range including the realme X7 Max.

YouTube Music is the default Music Player that has realme HD Sound tuning, co-developed by realme and Dirac. This is good, but some mid-range phones have Dolby Atmos support. It doesn’t have FM Radio support. Audio through the mono speaker is decent, but it is no as loud as the stereo speakers in the realme X7 Max or the Nord 2. Audio through earphones using is good. This has Widevine L1 so that you can play HD content on  Netflix and other streaming apps. It also supports HDR content on YouTube, but this doesn’t work on Netflix. It is not clear if this will be available with an update in the future.

The GT Master Edition has support for 5G SA with support for n1/n3/n5/n8/n28a/n77/n41/n78 Network Bands in India, thanks to Snapdragon X53 5G Modem. It has 4G Wi-Fi and VoLTE with support for Carrier Aggregation on 4G, so you can see 4G+ symbol when it’s enabled automatically. Other connectivity options include Dual-Band Wi-Fi 6 802.11 ax (2.4GHz + 5GHz) 2X2 MIMO, VoWiFi / Wi-Fi calling support, Bluetooth 5.2, GPS, GPS/Glonass/Beidou/Galileo/QZSS. It also has NFC support. The dual channel download acceleration combines mobile data and Wi-Fi to enhance the download speed. Moving on, the call quality is good, and we did not face any call drops and the earpiece volume was loud.

This is one of the first phones to be powered by Snapdragon 778G 6nm Mobile Platform that uses Qualcomm Kryo 670 CPUs with new architecture delivers up to 40% performance uplift and the Adreno 642L GPU is designed to deliver up to 40% faster graphics rendering compared to the previous generation. It has  4 x A78-based Kryo 670 Performance CPU clocked at 2.4GHz and 4 x A55-based Kryo 670 Efficiency CPUs clocked at up to 1.80GHz.

The Adreno 642L GPU offers a smooth gaming performance even in graphic intensive games, and the phone doesn’t get too hot even during long hours of gaming, thanks to vapor chamber that has an area of up to 1729.8mm², which is larger and more efficient in cooling. It also has five-layer cooling system is made of graphite, copper, aluminum alloy, silica gel, etc. The super large heatsink area can cover 100% of core heat sources, which is a
total area of more than 12387.4 mm². This significantly reduces the temperature and keep the phone in a high-performance state, said the company.

The phone gets a bit warm on intensive gaming or when recording 4K videos for long, but it doesn’t too hot. We did not face any issues or frame drops in the graphic-intensive games like COD, BGMI and Genshin Impact. It reached maximum 42º in our testing indoors in Wi-Fi, but this might vary outdoors in 4G. That said, check out some synthetic benchmark scores below. 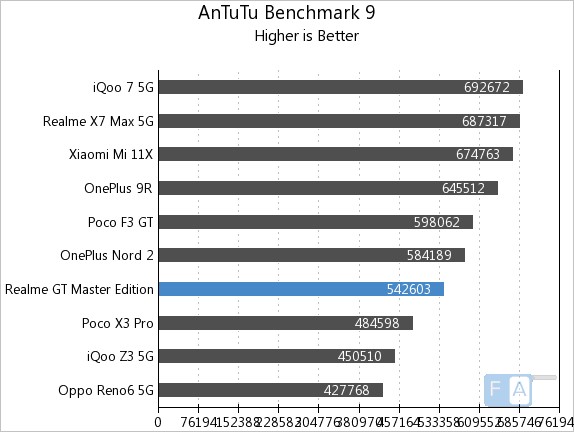 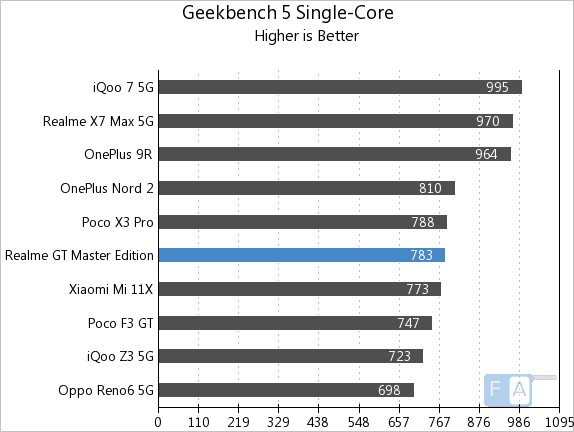 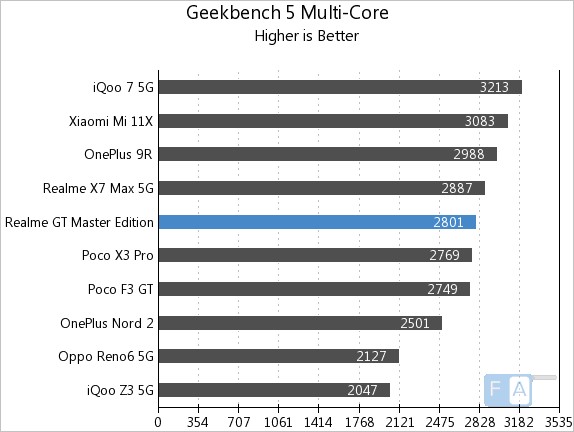 As you can see in the benchmarks, the realme X7 Max 5G powered by the Dimensity 1200 is still better than the realme GT Master Edition powered by Snapdragon 778G.

Coming to the battery life, the phone packs a 4300mAh (typical) battery, slightly smaller than the 4500mAh battery in the realme X7 Max. It didn’t even last for the whole day with 4G enabled and multimedia use, and more than that with minimal use. I only got around 4 hours of screen on time with a day of use on Wi-Fi. With 4G use, it is less than that. The Nord 2 and realme X7 Max that have a slightly bigger 4500mAh battery offers better battery life. I don’t know if this is an issue with the optimization, if it is the company should fix it with a future update. Since the phone has support for Super Dart 65W fast charging, it can charge from 0 to 100% in about 35 minutes with the bundled 65W charger. 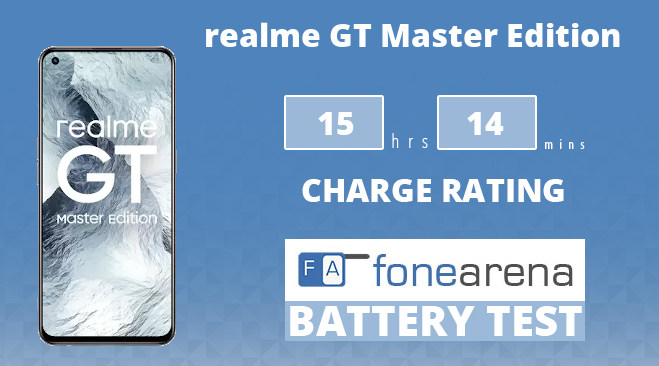 It achieved One Charge Rating of 15 hours and 14 minutes in our battery test, less than the Nord 2 and the realme X7 Max. This is just average for a phone with a 4300mAh battery. We tested it in 120Hz which is adaptive, so in some cases it switches to 60Hz. Battery life is based on different factors such as software optimization and the processing power that requires to power the phone, so if the phone lasts for a day with heavy use, it is good.

At a starting price of Rs. 25,999, the realme GT Master Edition is just an average smartphone from realme. It has a 120Hz AMOLED screen offers a good multimedia performance, the phone offers smooth performance and a lag-free experience and the build quality is good as well, at least in the Master Edition that has a unique Suitcase look. However, the phone’s camera lacks OIS, it also misses Stereo speakers, and the battery life is not impressive. For me, the realme X7 Max was a value for money offering compared to the GT Master Edition. Hope the next GT series mid-range phone.

It is available from realme.com, Flipkart and offline stores, however the 6GB + 128GB version will be available later.