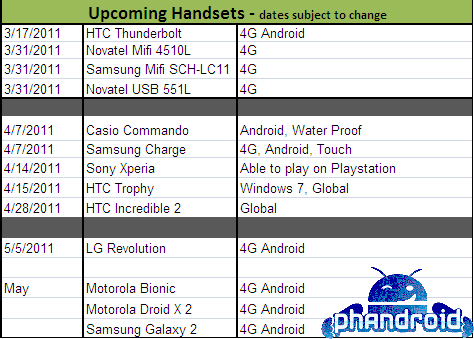 Verizon Wireless is the largest mobile phone network in USA and in the past few years, they have launched several good devices. Back in 2009, they launched their first ever Android device which is known as the Motorola Droid, also one of the most selling Android devices in USA. At the moment, Verizon Android line is very strong and now it looks like they are planning to add plenty of Android devices in their line-up. According to our friends over at Phandroid, they got their hands on a leaked shot of Verizon Wireless Spring roadmap, which is showing that Verizon is planning to introduce at least 10 new phones, in which 9 are Android and 1 is WP7 powered phone. Well, if the screenshot is legit then it’s confirmed that Verizon has something big up their sleeves.

The roadmap is also showing two Mi-Fi and one USB device, which is launching tomorrow according to the schedule. And as you can see HTC Thunderbolt, which is already available at Verizon gives hint that the roadmap is legit. It seems that Casio Commando is a rugged Android powered device as its water proof and the name also suggests that it’s a powerful phone. This phone is launching along with the Samsung Charge (previously known as Samsung Stealth), which is an Android powered device and Samsung first LTE device. It’s launching on 7 April.

A few days ago, we say the SE Xperia Play with Verizon branding which confirmed it that the device is headed to Verizon and according to the roadmap, it’s launching on 14 April. And the very next day, Verizon will launch HTC Trophy which we all know is coming to Verizon and it’s a global phone. Verizon is also planning to launch successor to HTC Incredible in April too. Obviously the successor is known as the Incredible 2 and it will be launched on 28 April.

In May, Verizon is planning to bring some super phones. According to the shot, they are planning to launch LG Revolution, Motorola Bionic, Motorola Droid X2 and Samsung Galaxy S2. LG Revolution is similar to LG Optimus 2x and it’s a 4G Android powered phone, and it’s scheduled to hit Verizon on 5 May. And about the Bionic, Droid X2 and Galaxy S2, they are scheduled for May release but no words on the release date.

Well friends, that’s all we know about the new upcoming phones. I am not giving any guarantee on the release date as they are not confirmed, so better wait for official words from Verizon. So stay tuned with us and tell us that are you excited about Verizon’s new upcoming line-up?