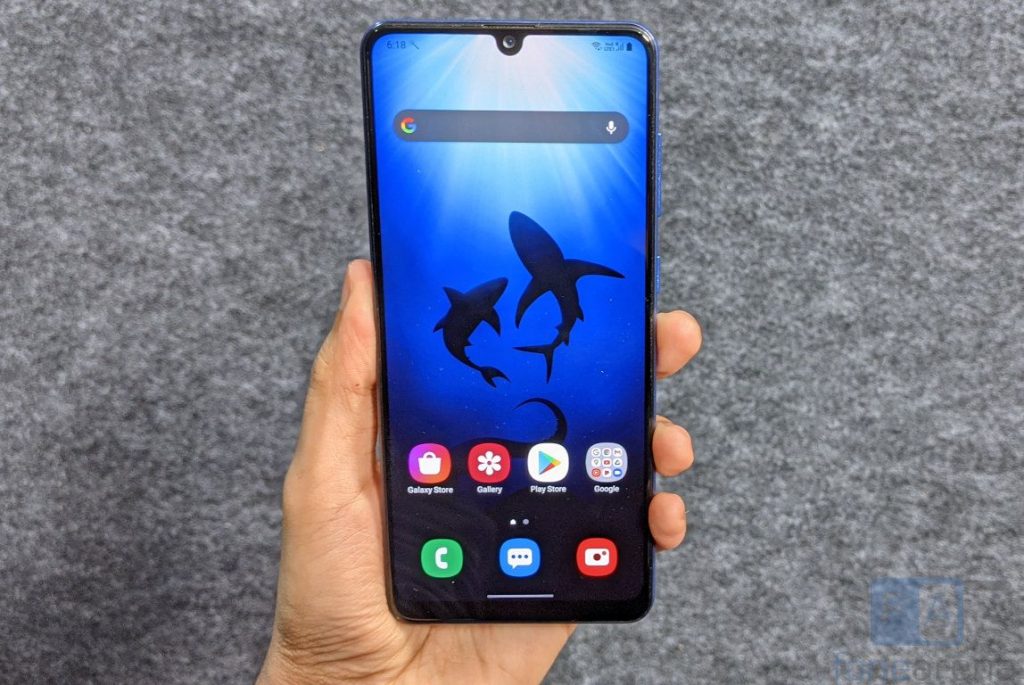 When we hear the term Samsung Galaxy smartphones, it is usually the Galaxy S series or the Galaxy Note series that comes to mind, which is natural considering that they are Samsung’s flagship smartphones. However, in the recent years, Samsung has begun releasing a lot of smartphones in the mid and low budget range, in which the Galaxy A series belongs to. One among the many devices in the series is the Samsung Galaxy A31 that was launched for Rs. 21,999, putting it right in the mid budget price range, and later got a price cut to Rs. 17999. This price range is quite competitive, with many brands such as realme, Xiaomi and OPPO participating with their devices.

When launching the A series and M series smartphones, Samsung revealed that they are releasing these smartphones after conducting extensive market research to understand the pain points for customers. With the A31, they have decided to include a massive 5000mAh battery and a large 6.4-inch Infinity-U display, but are these enough to justify its price tag? Read on in my review of the Samsung Galaxy A31. 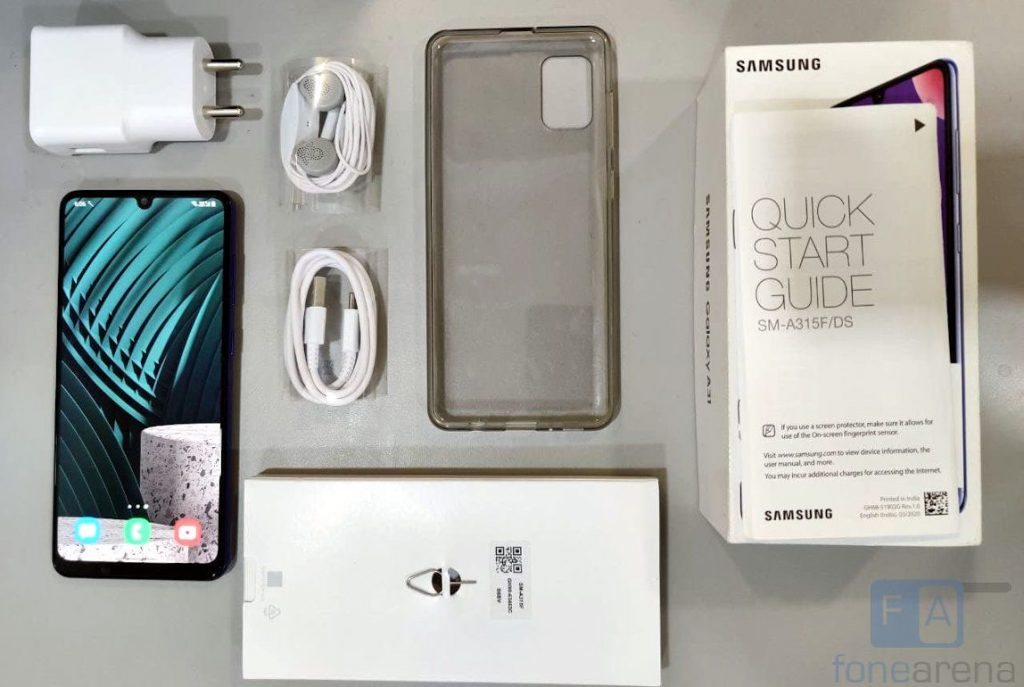 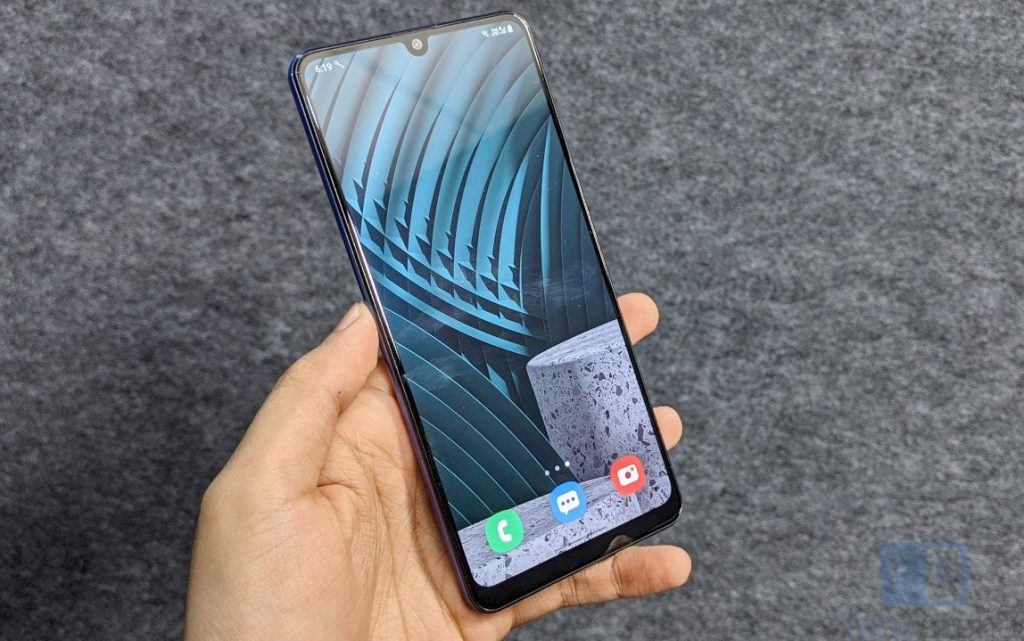 Samsung took a pretty standard no-frills approach to the design of the Galaxy A31, which isn’t necessarily a bad thing. On the front, you have a 6.4-inch flat display with reasonable bezels on the top, left and right edges, and a slight chin on the bottom edge. The front camera is housed in a notch in the top center of the display, and it cuts a little more into the display than I would like, but I barely noticed it after a few hours of using the phone.

Both the volume and power/lock button can be found on the right edge of the smartphones, the left has the SIM card tray, the top edge has nothing and on the bottom you can find the 3.5mm audio jack, USB Type-C port and the single speaker grill. Holding the device is rather easy thanks to the edges being very rounded and the device weighs 185gms, which is quite comfortable in the hand. There is no official ingress protection, so you have to be quite careful around water and dust. 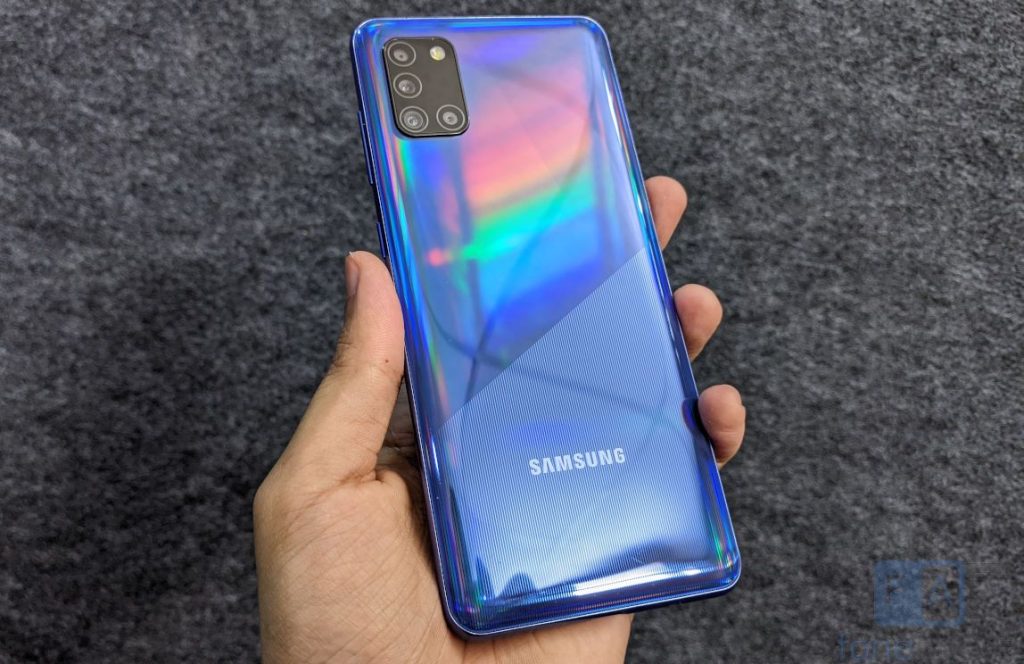 The back is made out of plastic with a very reflective mirror/prism finish on the top half that shows a lot of different colours in direct light, and grill-like design in the bottom. On the top left corner of the back is the rear camera module that houses many sensors offered by the Galaxy A31. The back does feel like it could get scratched easily, and thankfully Samsung includes a TPU case in the box, which is great. 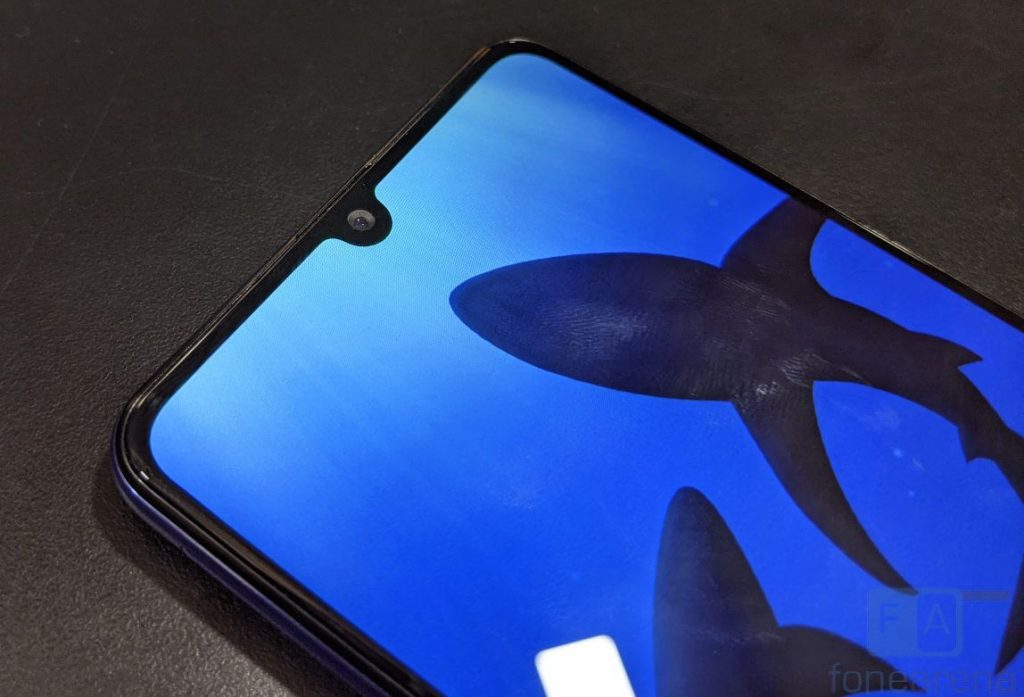 The display on the Galaxy A31 is a 6.4-inch Super AMOLED 60Hz panel with a pixel resolution of 2400 x 1080 and a 20:9 aspect ratio. Like nearly every mid-range and above Samsung smartphone, the display quality is great. Contrast, colour reproduction and brightness have a clear Samsung characteristic feel to them, meaning that they are a bit on the high side. This isn’t really a negative as watching content on this display is overall is a good experience, although some users may prefer true to life images instead.

Another possible negative for the A31 is the lack of support for HDR content playback, which may be a bummer for some users who watch a lot of Netflix, Prime or YouTube HDR content on their phone. The lack of high refresh rate is also a little disappointing, but not a deal breaker. 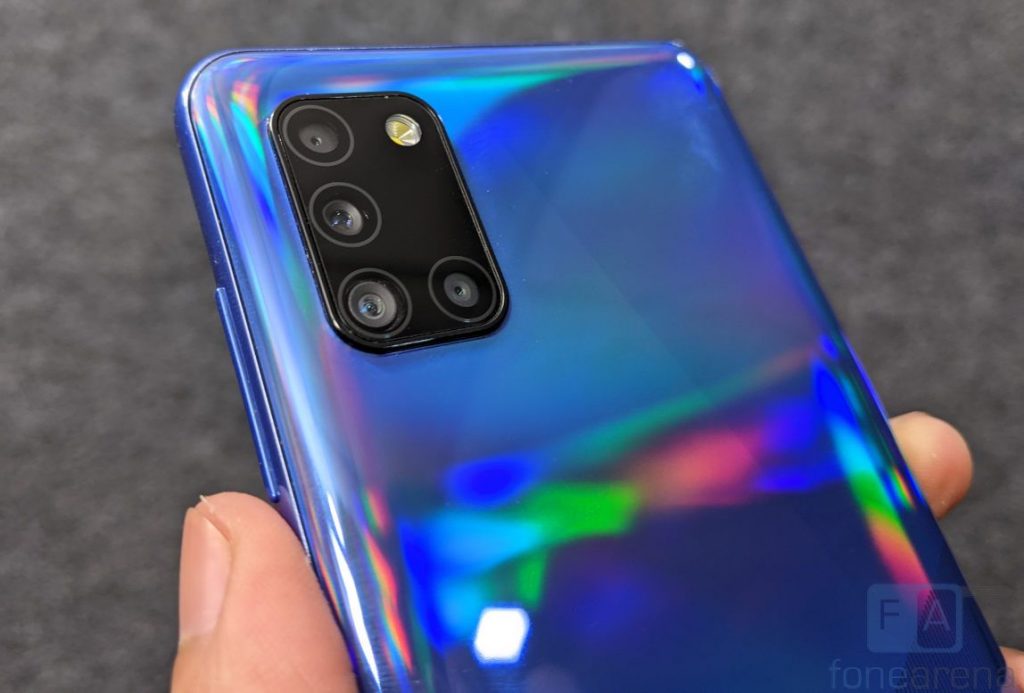 The photos that come out of the Galaxy A31 were what I would describe as a mid-ranger. In outdoor shots, there is a good amount of detail and decent dynamic range. Colour in photos look natural and not over-saturated like some Samsung smartphones from before. Night-mode photography were unexceptional however, producing decently bright photos, but with a lot of grains.

Like most 48MP sensors, the phone uses quad-pixel binning when taking standard photos and outputs 12MP photos. This results in smaller file sizes and better quality images. You can take images in full 48MP resolutions, but honestly, I struggle to find any noticeable quality improvement when clicking photos at that resolution. It still is pretty much a gimmick at this point.

Having an ultra-wide sensor is always a good choice and the A31 comes with an 8MP shooter. As expected, the photos that come out of the ultra-wide camera are not as good as the main shooter. White-balancing especially is a quite different when compared to the main shooter and overall, the images are a lot softer.

The Macro sensor did not produce great images either and in photos that require depth information, the dedicated depth sensor performs just okay. Video on the Galaxy A31 is limited to 1080p 30fps shooting.

Check out some samples below: 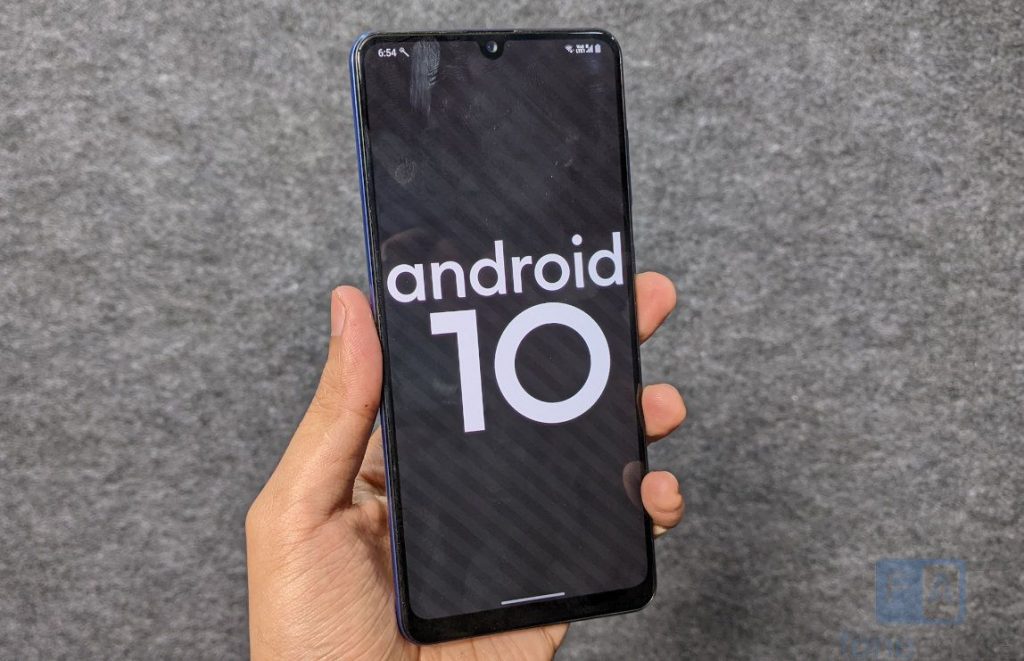 The Galaxy A31 runs One UI v2.1 that is based on Android 10 and the software experience is about what you would expect from Samsung. OneUI has become pretty a standard for Samsung phones, with its focus around one handed UI design language, smooth animations, and loads of customizability. The software is also secured Samsung’s Knox software which provides device-wide encryption and locks your data in case of theft.

In terms of pre-installed software, I have to say, the Galaxy A31 came with quite a few such as Candy Crush Saga, MX Taka Tak, Trell, etc. However, these can be uninstalled without an issue.

The phone also comes with a Radio app which requires an earphone to be plugged in to function as antennae. For the music app, Samsung has discontinued their first party Music app in favour of YouTube Music, which comes pre-installed. Another app I noticed missing was a Calculator, but that can be easily installed from either the Play Store or the Samsung Galaxy Store.

The Galaxy A31 comes with an in-display fingerprint sensor, which is pretty much standard across all devices in this price range. The location of the sensor is reasonable and during my review, I found the unlocking process to be mostly hassle-free; it was fast enough and accurate. One thing to note is that typically smartphones have a limit of storing up to 5 fingerprints, however, the A31 can only store up to 3.

The phone does support face unlock, but it uses the front facing camera for the authentication, which is not very secure in my opinion. For this reason, I did not use it, but the option is available.

It comes with support for dual 4G SIM cards with dual 4G standby, along with a dedicated Micro SD card, expandable up to 512GB, in the same tray. Our model comes with 128GB of storage, out of which you get about a 100GB for use after formatting and system files.

With regards to cellular connectivity, I did not face any real issues such as call drops, signal strength was fine and calls were clear. It supports dual-band Wi-Fi 802.11ac, which means it can connect to both 2.4GHz and 5GHz bands. Same as the Wi-Fi connectivity, the A31 worked perfectly on cellular with no unusual disconnections. It has VoLTE and VoWiFi features as well.

Powering the Galaxy A31 is the MediaTek Helio P65 SoC, which is an octa-core CPU that can boost its clocks up to 2GHz. It is complimented by 6GB of  LPDDR4x RAM and 128GB of storage. When it comes to performance, the Helio P65 is not a very powerful chip, and that does show in the day-to-day use. For most users, the hitches and stutters in animation may not be very noticeable, but they do occur. Opening apps are reasonably fast and it is possible to do a bit of light gaming. However, with heavier 3D games, the experience is not great, and I would not recommend it.

Check out the synthetic benchmark scores below. 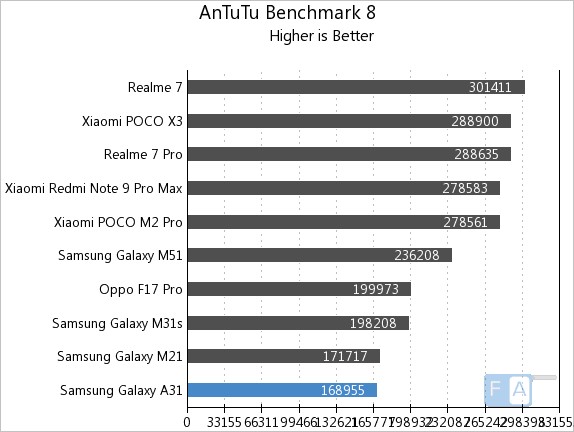 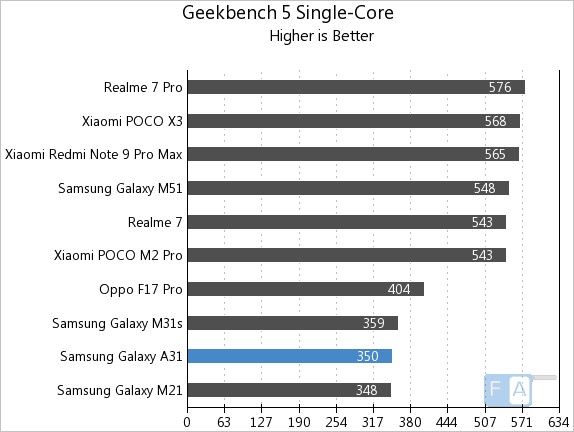 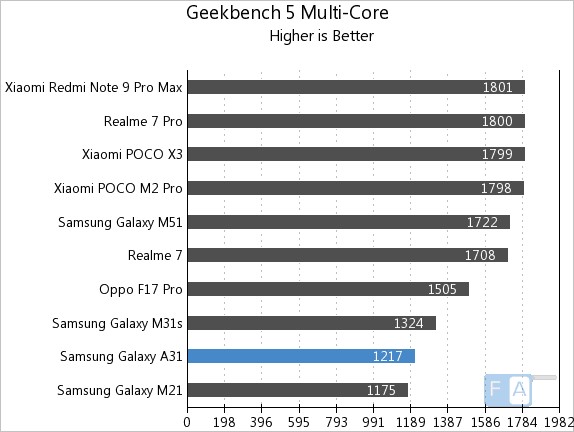 Battery life is a strong point for the Galaxy A31 with its 5000mAh battery. I could easily get through a day of heavy use and almost 2 two days with light use. Regarding screen-on-time, I was able to get well above 5 hours and the standby time was excellent too. The cherry on top for the A31 is the 15W fast charging which could get the phone from 0% to 100% in under an hour and a half.

So is the Galaxy A31 worth its price tag? Well, lets look at what it offers — an sAMOLED display that is great for media consumption, a large solid battery that can handle the most power hungry applications and still last a day, and a camera experience that is quite reasonable. However, the performance of the MediaTek Helio P65 holds it back quite a bit and the design of the smartphone is nothing exciting.

If you are looking to purchase a Samsung smartphone around this price range, I would strongly recommend spending a bit higher for the Galaxy M51, or the Galaxy M31s.

Other strong competitors in this price bracket is the Realme 7 Pro, the POCO X3, or the Motorola One Fusion+.

The phone is currently available for Rs. 17,999 from online retailers such as Flipkart, Amazon.in and offline stores.