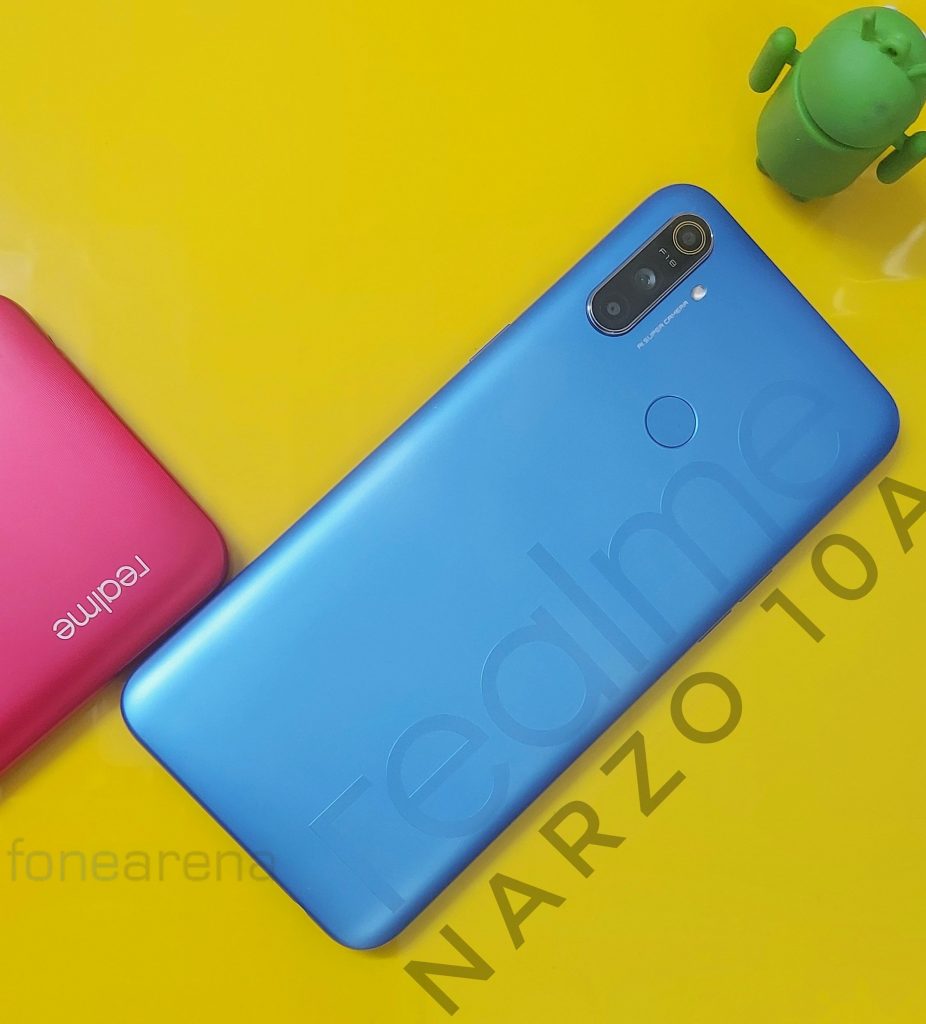 Realme introduced its new Narzo series recently with two smartphones – Narzo 10 and Narzo 10A. While the Narzo 10 is positioned above Rs. 10,000 segment, the latter i.e., Narzo 10A is positioned under Rs. 10,000 price segment. Does the Narzo 10A bring anything new to the table or is it just an old wine in a new bottle? Let us find out in this Realme Narzo 10A Review. We have also compared it with the realme C3 and discussed what has changed and what has not. 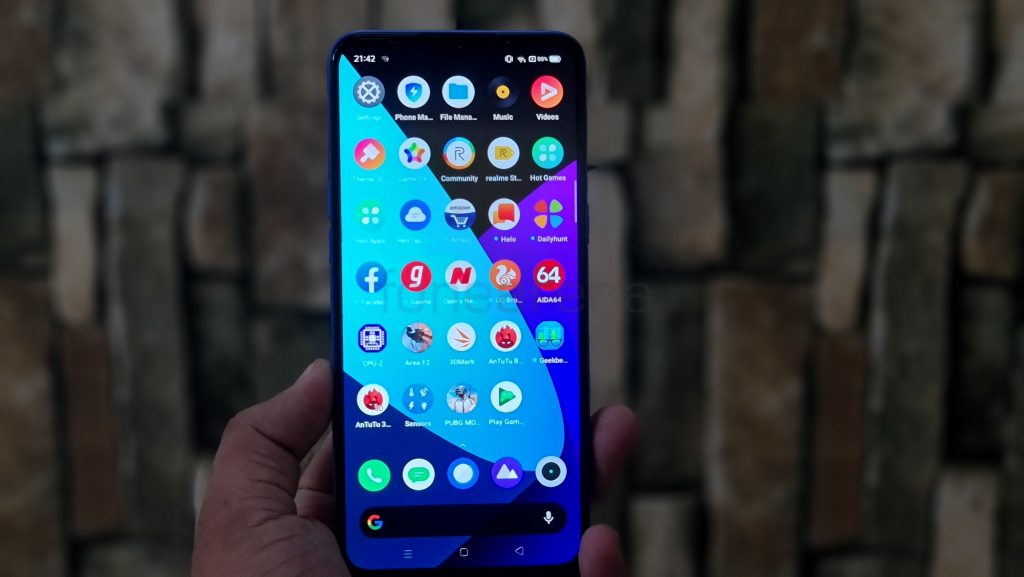 The realme Narzo 10A flaunts a 6.52-inch HD+ 20:9 mini-drop display with a resolution of 1600 x 720 pixels and is protected by Corning’s Gorilla Glass 3+. The quality of the panel is identical to the realme C3 and our take on the display in realme C3’s review holds the same for the Narzo 10A as well – Bright with vibrant colors that are a tad better compared to the realme 5i, but not the sharpest display we have seen in this segment. You can adjust the color temperature with the three options — Cool, Default, and Warm provided under Settings. There is no support for HDR video playback, HD playback on Amazon Prime Video, NetFlix (WideVine L3 certification), and the multimedia experience isn’t the best. 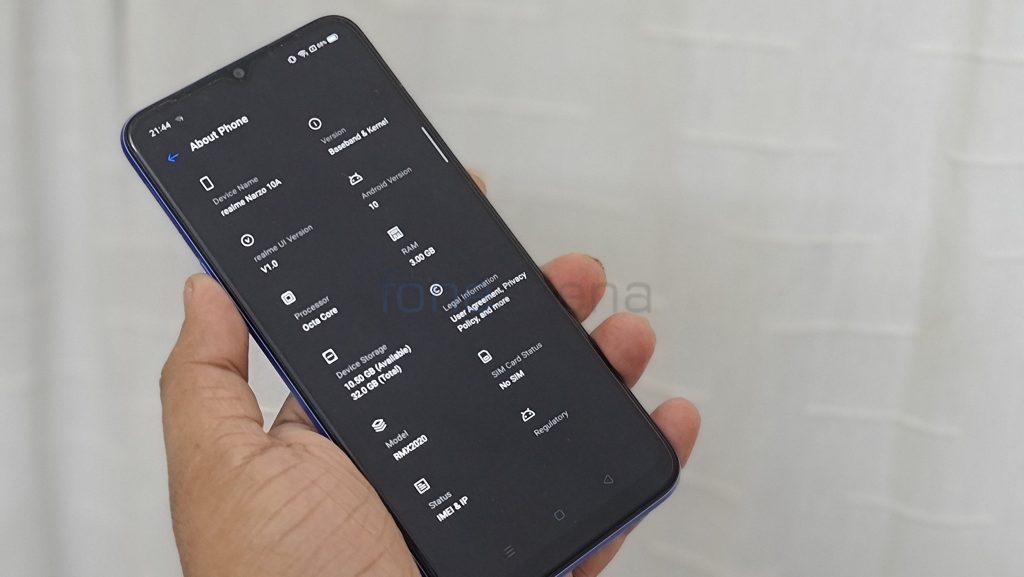 The Narzo 10A runs on realme UI v1.0 based on Android 10 with May 2020 security patch. realme UI is on top of Color OS 7, but is a major departure in terms of design from Color OS 6 and comes with a revamped user interface, customizable icon style, animated wallpapers, dual earphone connection, personal information protection, focus mode, system-wide dark mode, screen recording with internal audio recording, smart sidebar, floating calculator, screen light effects, and more. For reference, the realme C3 is also on the May 2020 security patch. It is nice to see brands prioritising timely security updates.

Powering the realme Narzo 10A is the Octa-Core MediaTek Helio G70 SoC that made its India debut on the realme C3 smartphone. The Helio G70 is built on the 12nm architecture and has Dual 2GHz Cortex-A75 + Hexa 1.7GHz 6x Cortex-A55 CPUs paired with 3GB of LPDDR4X RAM and 32GB of eMMC 5.1 internal storage. The Narzo 10A comes in a single 3GB+32GB option, but the realme C3 comes in 3GB+32GB and 4GB+64GB options. Both phones support storage expansion up to 256GB through microSD. 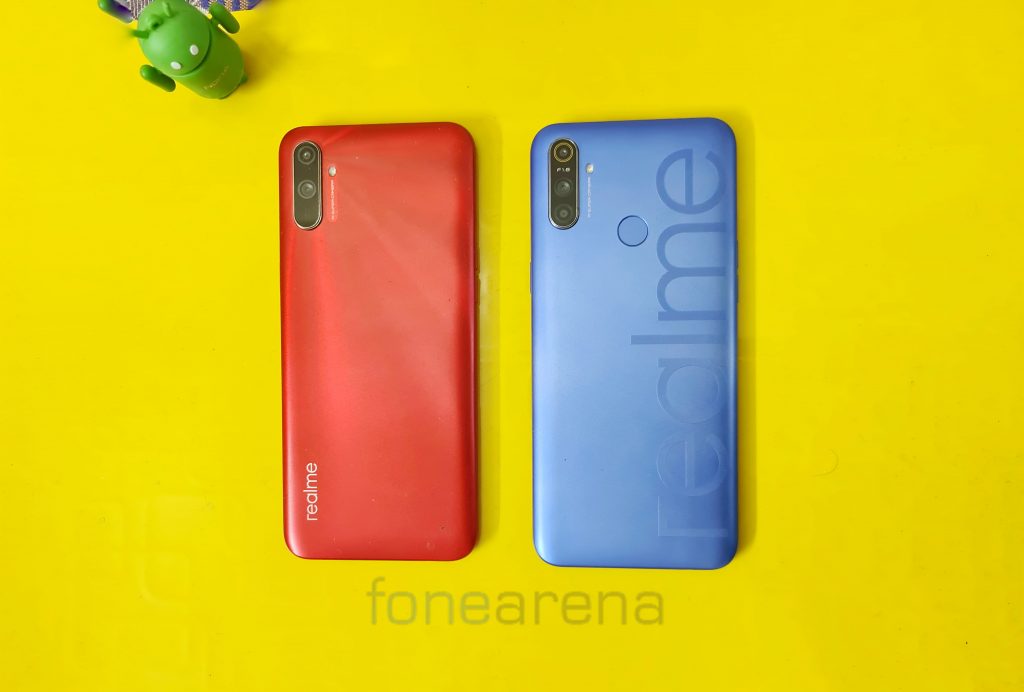 For starters, MediaTek G Series chipset is primarily focussed on gaming. MediaTek launched the top-end G90/G90T SoC last year, and it was followed by G70 earlier this year and now, the Helio G80. Coming to the performance, the Helio G70 on the Narzo 10A handled casual apps with ease and we did not encounter any sort of lag or whatsoever. Multi-tasking was fairly decent as well, but app loading times weren’t the fastest we have seen, thanks to the slow eMMC 5.1 storage. We tested the 4GB RAM variant of the realme C3, so the memory management is slightly better here compared to the Narzo 10A with 3GB RAM. Having said that, there won’t be any significant difference on the 3GB RAM variant of the realme C3. 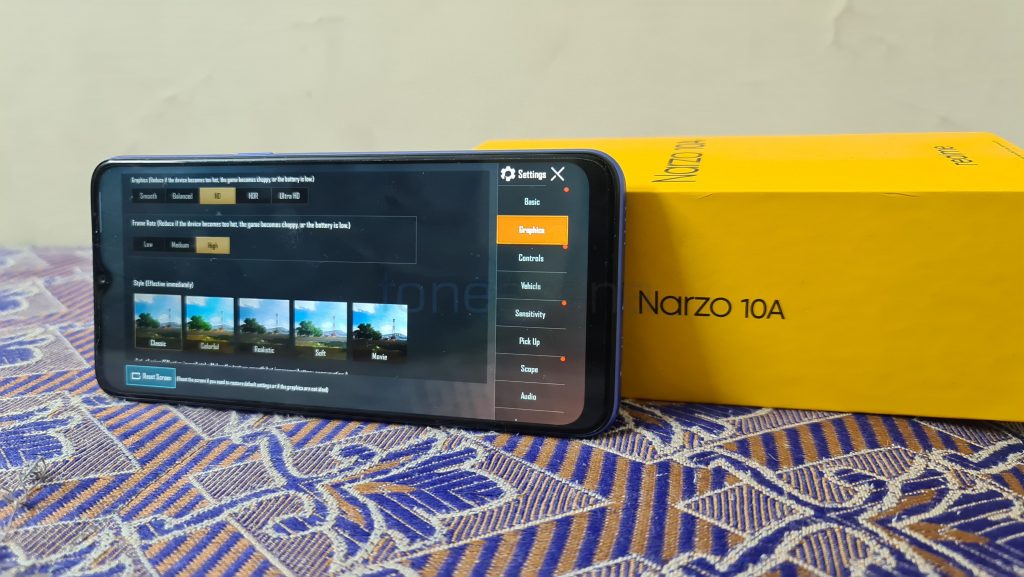 Coming to gaming performance, we tested the Narzo 10A with casual games like Alto’s Odyssey, Crossy Road and also tested with graphic intensive games like PUBG Mobile, Call of Duty, Asphalt 9 Legends, etc. Casual games ran fine without any issues and the Narzo 10A handled it with ease. With PUBG Mobile on the Narzo 10A, it runs in HD graphics by default, and the gameplay was quite smooth as well. Also, realme website doesn’t mention support for Gyroscope, but apps like AIDA 64, Device HW Info, CPU Z confirms Gyroscope support, and we tested the same in PUBG Mobile. The Gyroscope option works fine on PUBG Mobile game and the sound output via the loudspeaker was good as well. Lastly, regarding the thermals, you will feel the warmth around the rear camera module on extensive gameplay, but there were no signs of overheating.

Check out the benchmark scores below 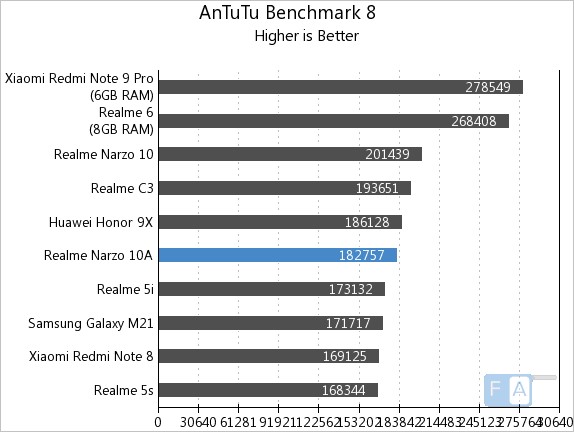 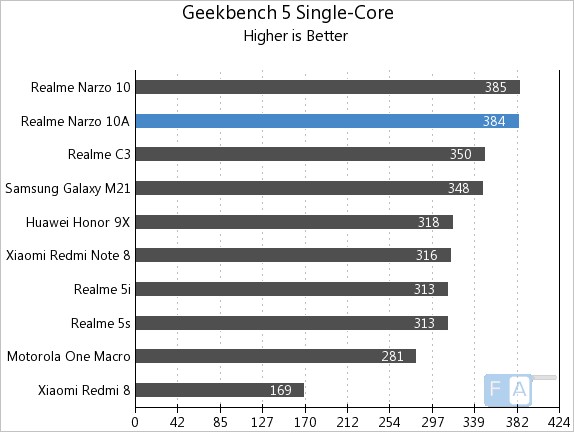 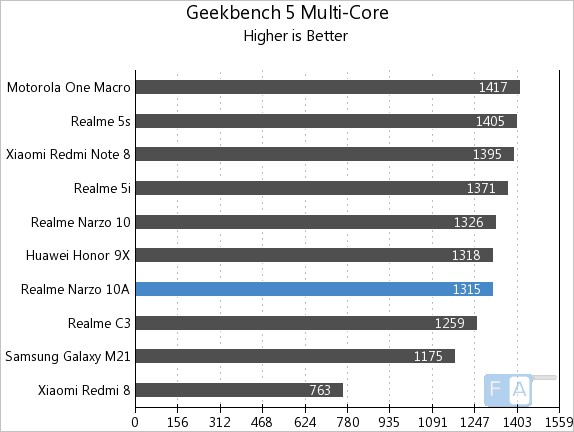 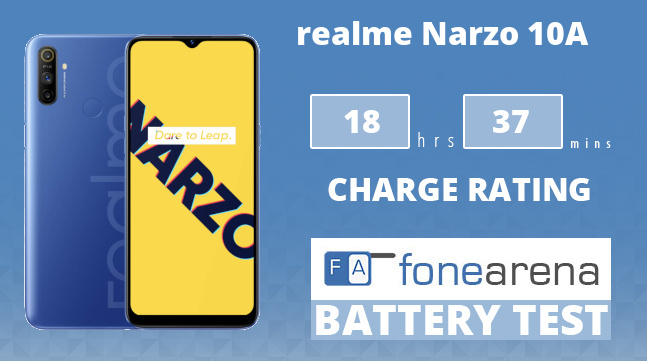 The Narzo 10A is backed up by a 5000mAh battery with support for 10W charging through micro USB. The battery life is similar to what we got on the realme C3. It can last one and a half days easily with casual usage (like continuous browsing, social media, voice call, editing documents) and with moderate to heavy usage, it can last around 18-19 hours on a single charge.

The Narzo 10A achieved FoneArena One Charge Rating of 18 hours and 37 minutes, almost same the realme C3. 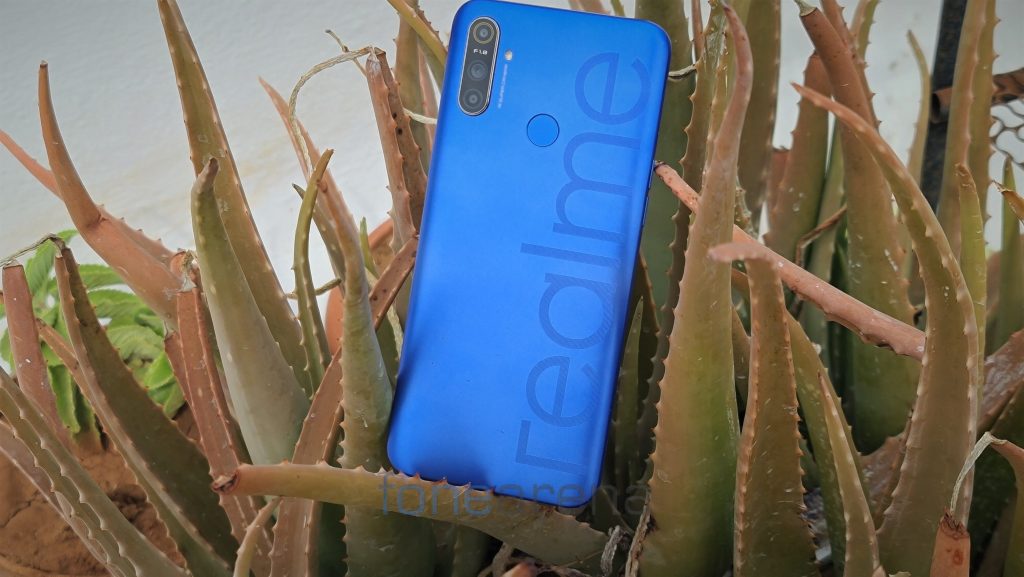 The Narzo 10A’s design on the back is completely different from the realme C3. It has a plain matte finish with realme logo engraved in large size font. The back is slippery, doesn’t offer a good grip, and you are better off with a protective case. We liked the Sunrise design of the realme C3 compared to the Narzo 10A as it offered a better grip and looked stunning as well. 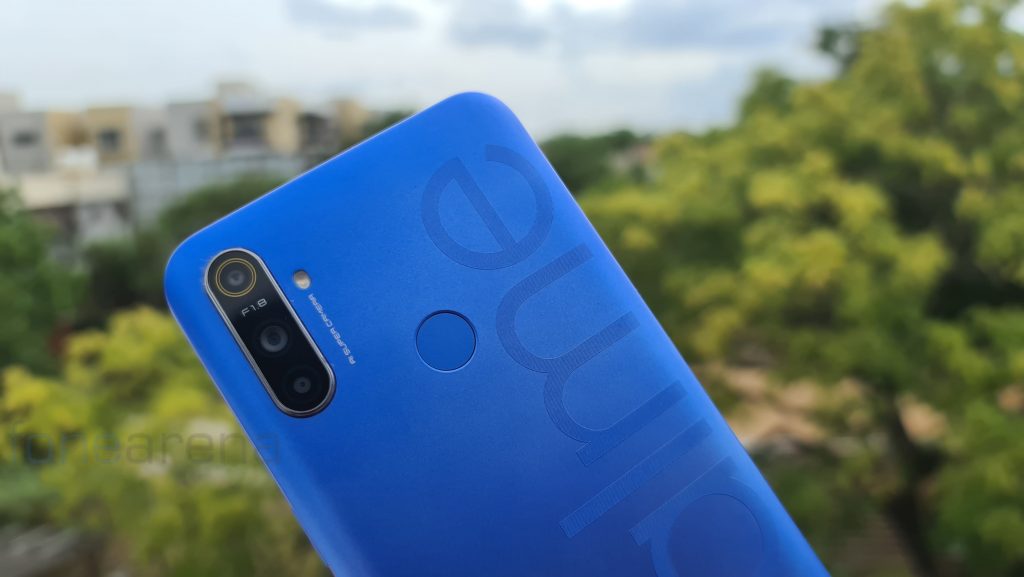 The Narzo 10A sports triple rear cameras compared to dual rear cameras on the realme C3. It is a combination of 12MP (primary with f/1.8 aperture) + 2MP (depth sensor with f/2.4 aperture) + 2MP (macro sensor with f/2.4 aperture). The image quality in daylight and natural lighting conditions come out quite decent with a decent amount of detail and vibrant colors. The dynamic range has improved compared to the realme C3 and it handles tricky backlight shots quite well. With the combination of HDR+Chroma Boost, you can get some good looking shots in daylight situation, but if you do not want the extra situation the Chroma Boost offers, you can choose to turn it off. 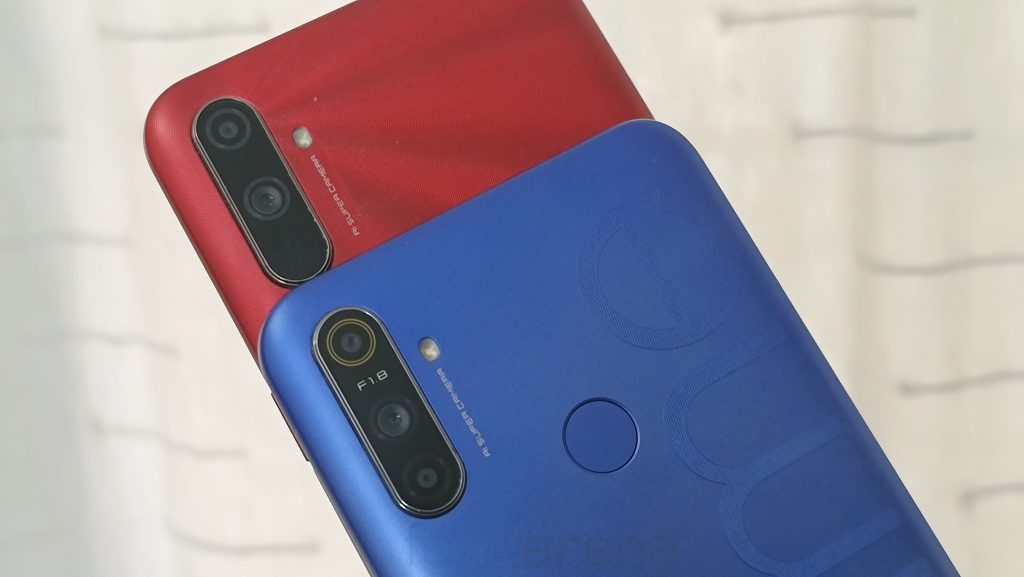 The portrait mode works as expected and the edge detection is improved as well. The pictures taken in artificial lighting and low lighting conditions aren’t that great and noise creeps in. The selfies from the front 5MP camera are strictly average and the exposure is gone haywire most of the times. Similarly, realme has added a macro sensor, but the results are strictly average and more often that, we ended up in blurry images, and it lacked detail. Lastly, in terms of video, it can shoot up to 1080p at 30 fps, supports slow-motion videos as well, and the quality of the footage is quite decent. It is to be noted that there is no Night Mode on the realme Narzo 10A and realme C3. 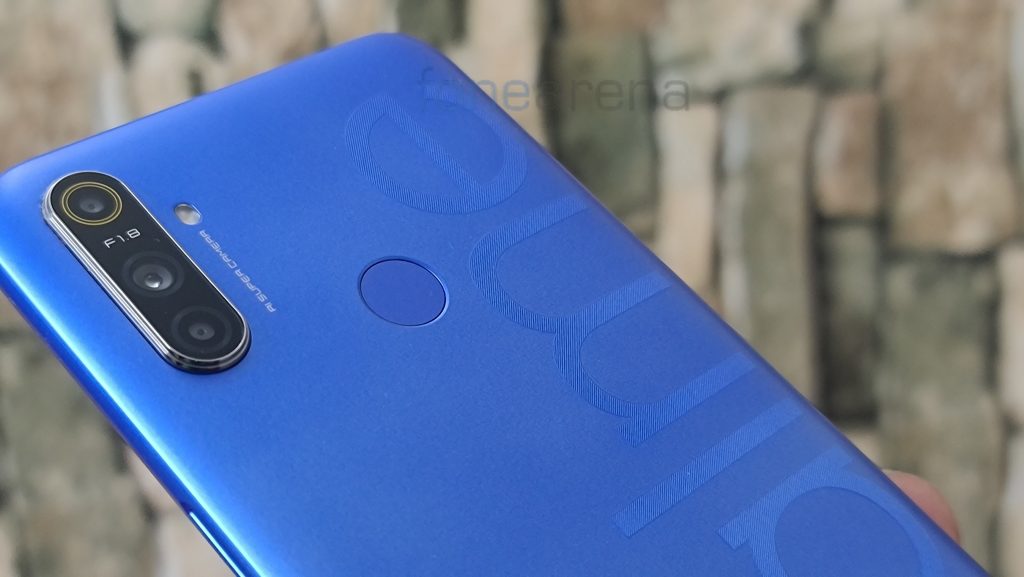 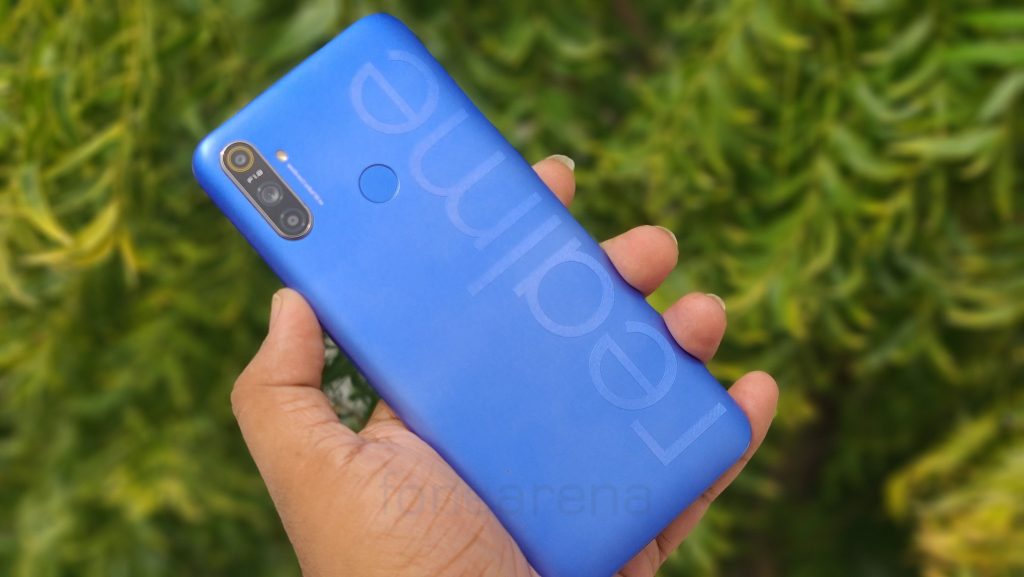 Priced at Rs. 8499, the realme Narzo 10A comes in ‘So Blue’ and ‘So White’ color options. After the recent price hikes, the realme C3 costs Rs. 7999 (3GB+32GB). So, for Rs. 500 more, you are getting a fingerprint scanner for better security and a macro sensor which is decent. Having said that, if you are in the market for a new smartphone under Rs. 9000, the Narzo 10A is recommended. But if you already own a realme C3, you can skip the Narzo 10A. It is available from Flipkart and realme.com.