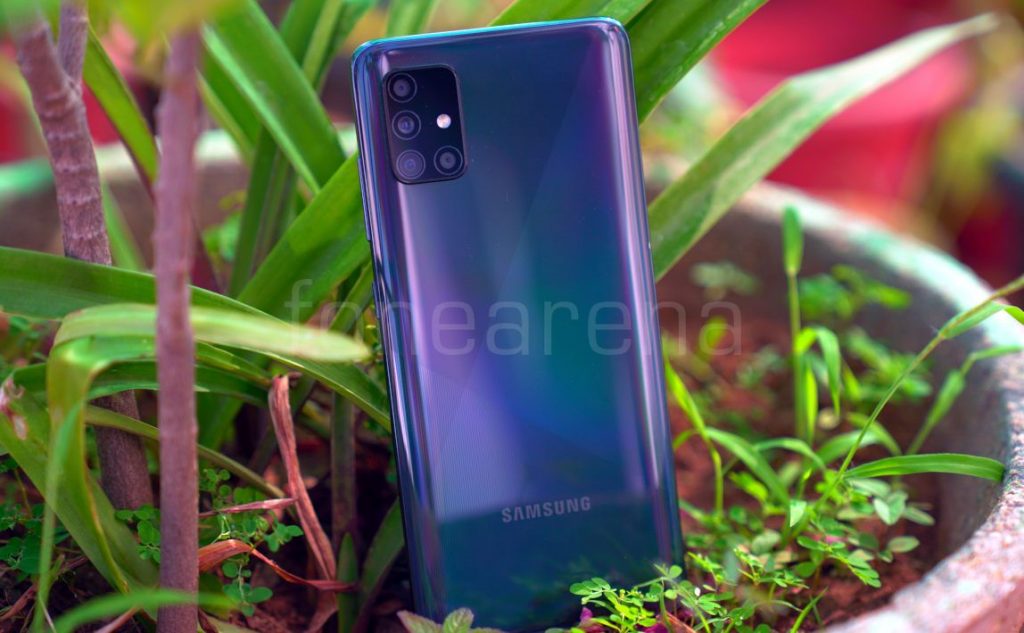 Note: Samsung Galaxy A51 comes in a single 6GB RAM + 128GB storage option and we tested the same. 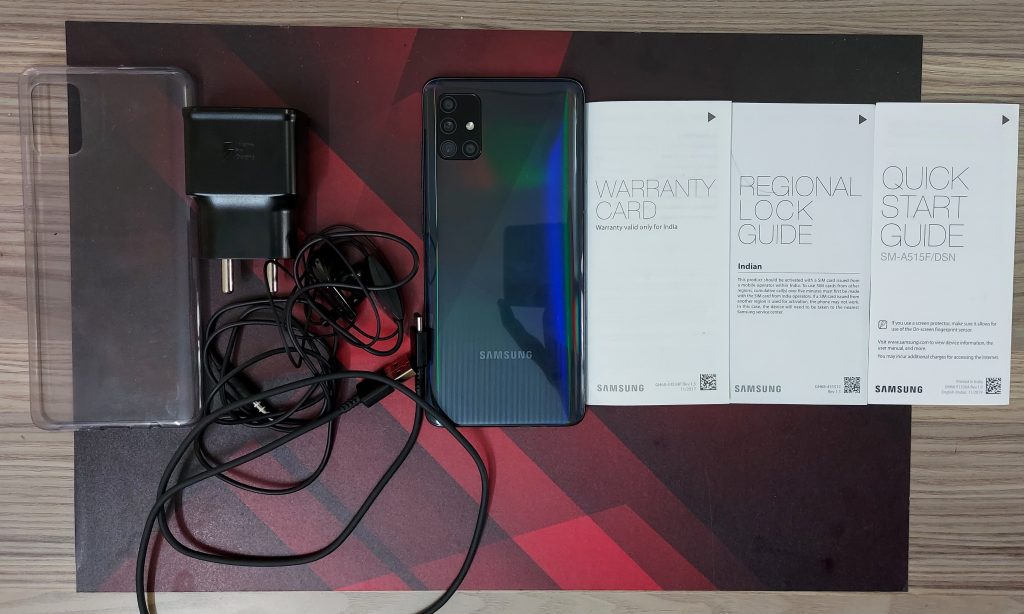 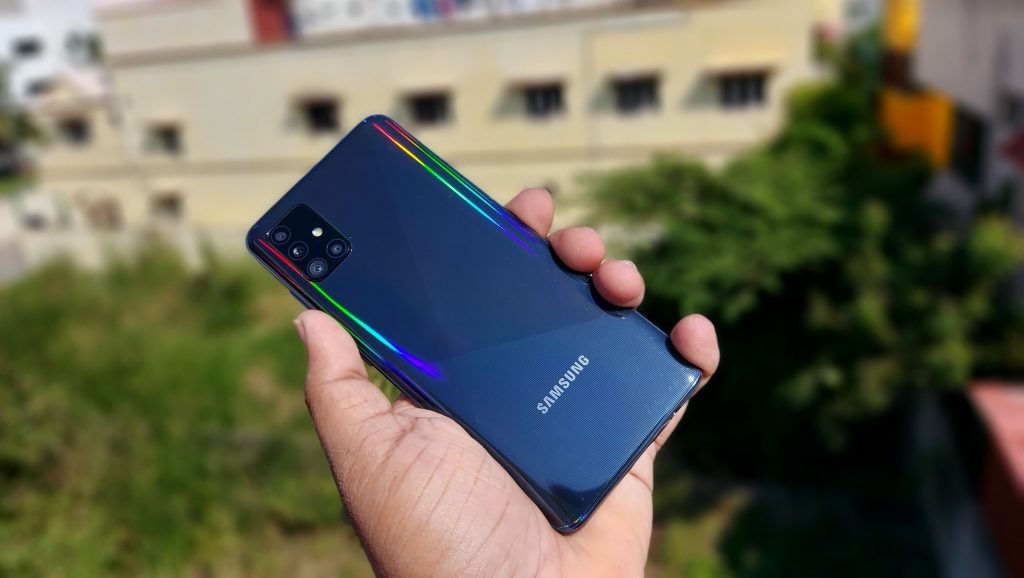 Although the back is plastic, the Diamond finish design is unique and produces a rainbow effect when it comes in contact under direct light. As mentioned earlier, the back is a fingerprint magnet, is slippery, but having said that, the build quality is solid and Samsung has done a good job in terms of the build. 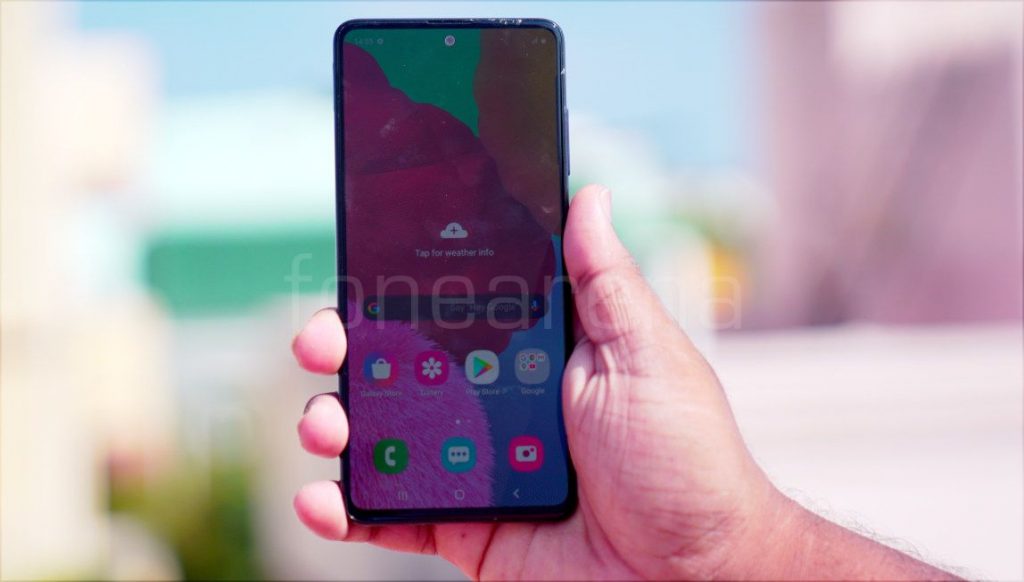 The Galaxy A51 sports a 6.5-inch Full HD+ Infinity-O Super AMOLED display with a resolution of 2400 x 1080 pixels. Samsung is known for its great quality displays and the same is the case with the Galaxy A51. The display quality is very good with good sharpness and color reproduction. The colors are vibrant and saturated, and you can tweak the colors from the display settings if you are not a fan of saturated colors. It gets pretty bright outdoors and the viewing angles are good as well.

The display is not HDR compliant and this means, you cannot playback HDR videos. But, it is Widevine L1 certified and you can enjoy 1080p FULL HD content on Amazon Prime and NetFlix. There is no mention of the glass protection, but on the whole, the display quality is very good on the Samsung Galaxy A51 and no complaints here.

Samsung’s Android skin has got better over the period of the year and with the release of One UI, Samsung has cut down on the bloatware and the UI is not heavy now. The Galaxy A51 runs on Android 10 based One UI 2.0 with February 2020 security patch. The phone comes with 128GB of internal storage (eMMC 5.1), so there is ample space for your apps, games, etc. There is support for Samsung Pay and it works as expected. One UI 2.0 is clean, simple and minimalistic, supports Dark Mode, and has nifty features.

Samsung is providing timely security updates which is definitely appreciable, but on the other hand, our experience with the UI on the Galaxy A51 was a mixed bag, and we’ll have to say more on that in the performance section. 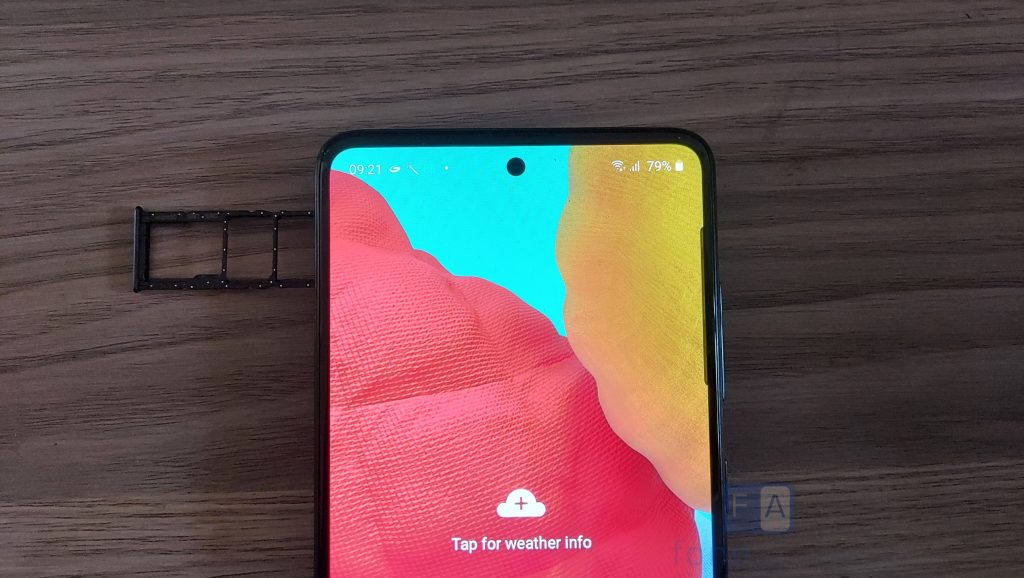 Samsung Galaxy A51 supports Dual Band Wi-Fi (2.4 GHz and 5GHz), NFC, and Bluetooth 5.0. It is a Dual SIM smartphone with Dual 4G VoLTE support and Wi-Fi calling support as well. The call quality, Wi-Fi performance were great, and we did not face any issues with connectivity on the Galaxy A51. 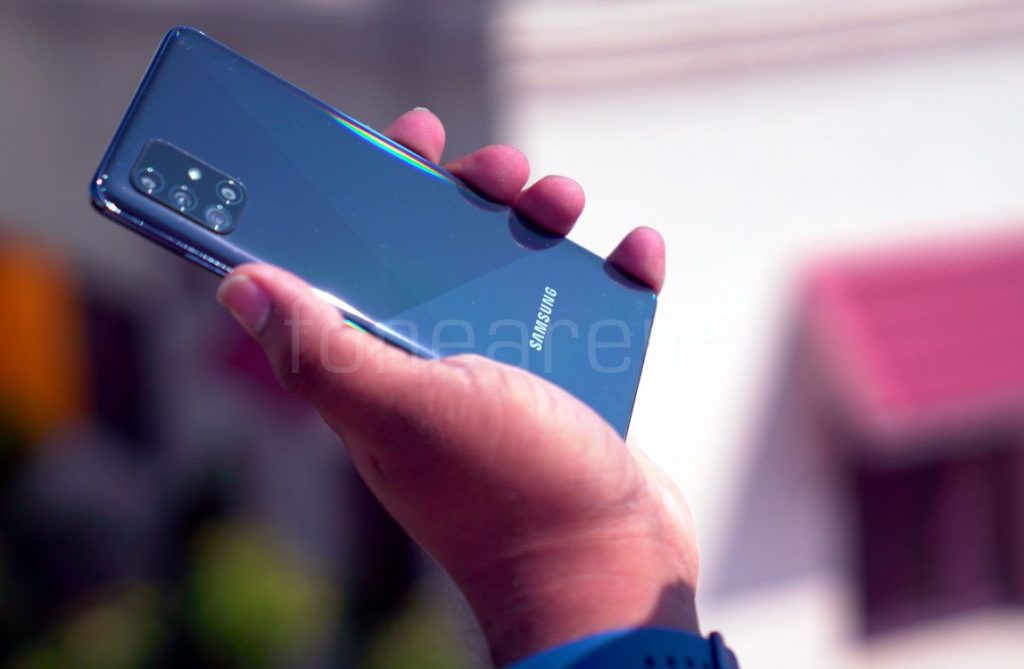 The Exynos 9611 processor handles casual day-to-day applications quite smoothly but struggles a bit in graphic-intensive applications. Although it features 6GB of RAM, switching between apps was not the smoothest and there was a noticeable lag. The app loading times are not the fastest we have seen in this price segment, and during moderate to heavy usage, there were stutters and lag in the UI. However, enabling ‘reduce animations’ from the settings improves the experience since it reduces motion effects on the screen, such as when the apps are opened or closed.

Coming to gaming, the gaming experience was good for the most part. Casual games ran fine without any hiccups and in graphic intensive games like Asphalt 9, PUBG Mobile, there are frame drops. The phone doesn’t get hot and uncomfortable during extended gaming which is a good thing. Furthermore, the audio experience in gaming is very good, thanks to the good sounding speaker. Check out some synthetic benchmark scores below. 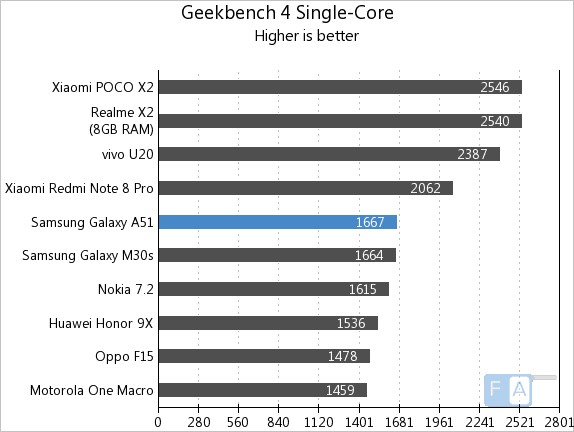 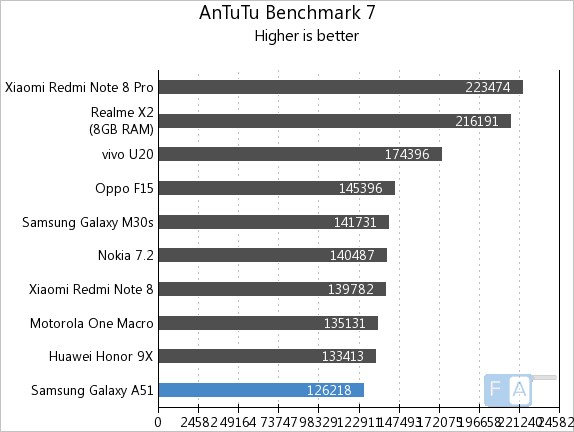 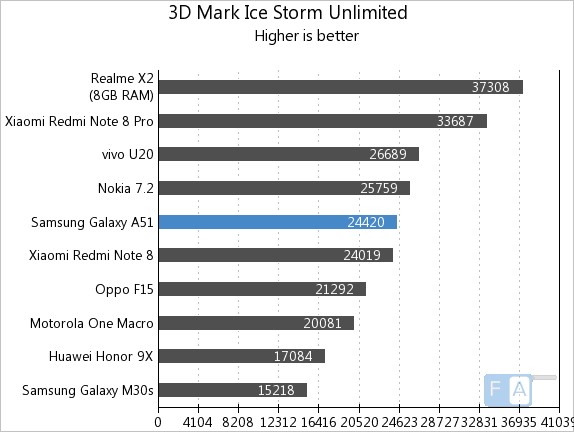 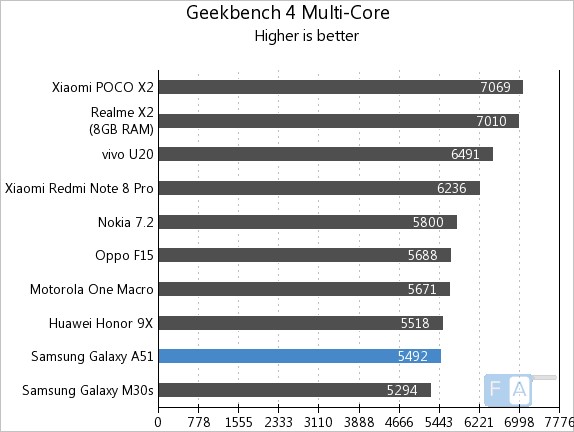 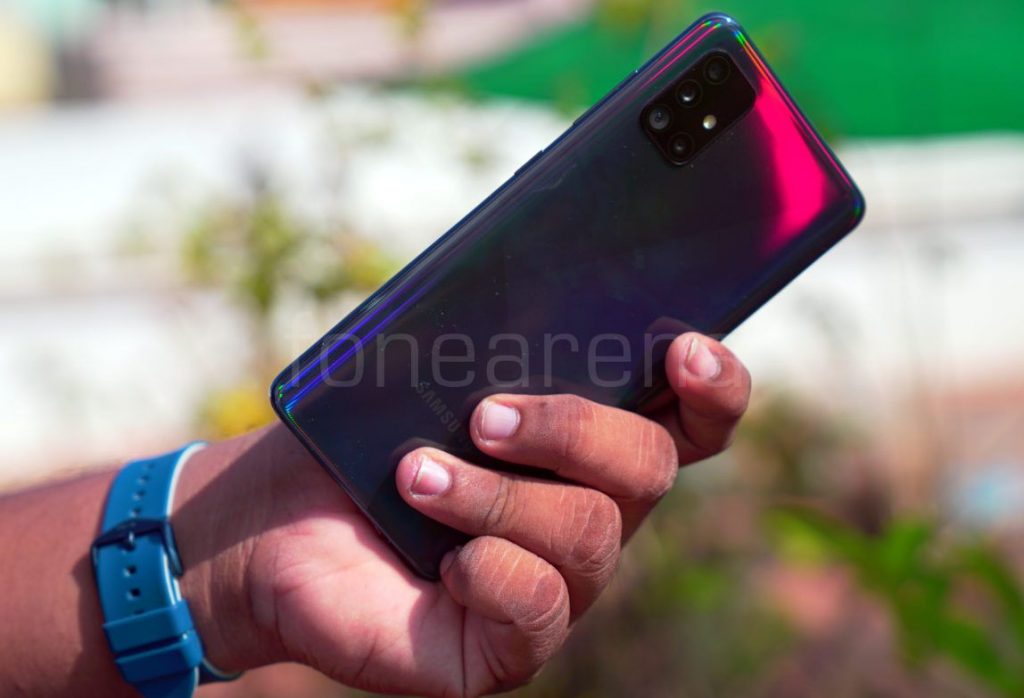 Coming to the camera quality, the pictures taken with the 48MP primary camera in daylight conditions come out very well with ample detail and sharpness is on point. The colors are vibrant and the dynamic range is good as well. There is support for HDR in camera and it is recommended to keep HDR ON always. Moving on, the 12MP ultra-wide-angle sensor does a good job as well, but there is a color difference in normal and wide-angle shots.

The macro sensor is a nifty addition and lets you get closer to a subject. However, the macro camera’s performance is strictly average and could have been better. Moving on, the front-facing 32MP clicks good selfies and the edge detection is on point in portrait mode. Furthermore, in the video department, the Galaxy A51 can shoot up to 4K videos, FULL HD videos at 60fps with support for Super Steady mode. The footage turned out to be quite good with a decent amount of detail and it gets the job done. 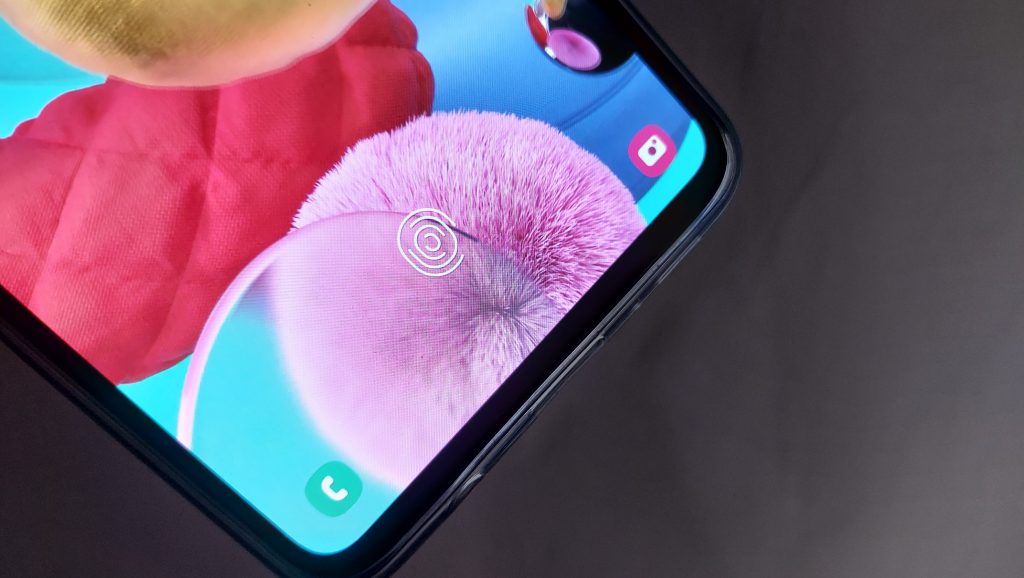 The speakers on the Galaxy A51 are quite loud and don’t distort at high volume levels. The multimedia experience will be good on this device. Coming to security, the Galaxy A51 sports an in-display fingerprint scanner and the response is quite quick as well. It is not the fastest we have seen in this price segment but gets the job done. The animation could be turned off, and we recommended you to do the same.

Samsung Galaxy A51 packs a 4000mAh non-removable battery with support for 15W charging over USB Type-C. With casual usage, the battery lasts over a day and with moderate to heavy usage, it lasts around 17 hours. Thanks to the 15W adaptive fast charger, the Galaxy A51 charges quickly from 0 to 100%. Here’s a breakdown of the charging duration measured at different intervals. 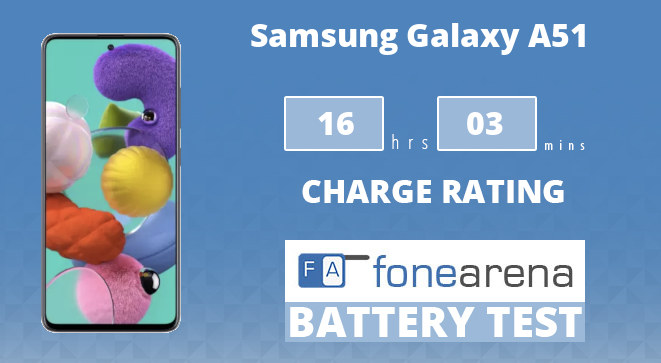 The Galaxy A51 achieved FoneArena OneCharge Rating of 16 hours 3 minutes. 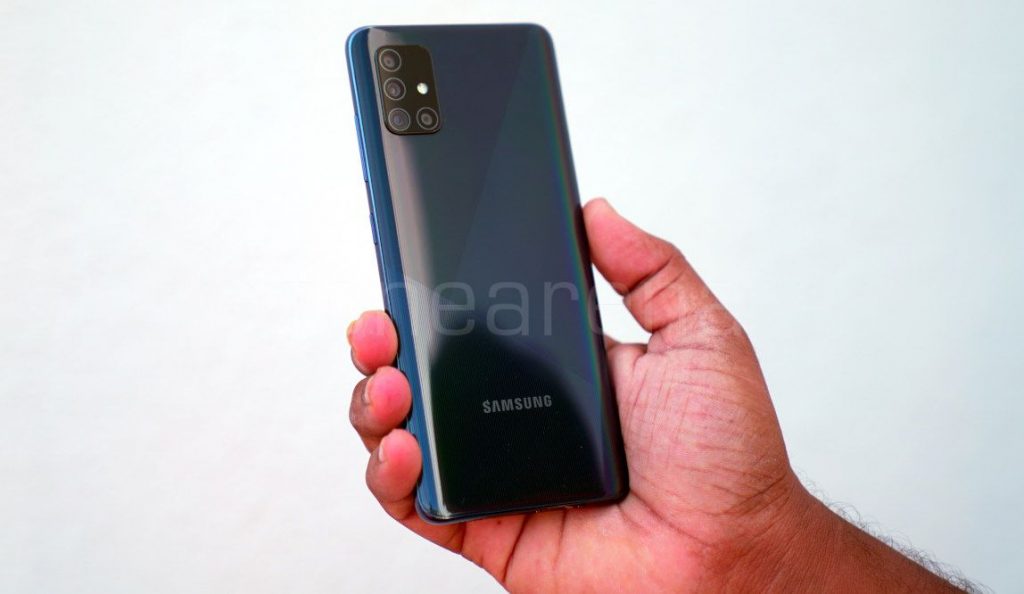 Samsung Galaxy A51 comes in a single 6GB RAM + 128GB storage option, is priced at Rs. 23,999, and is available on Samsung India e-Store, Flipkart, and Amazon.in. The A51 gets few things right like the great display, versatile camera setup, sleek design, and slim form factor. But it does not pack the power, considering Rs. 23,999 price point. One UI 2.0 is certainly clean and minimalistic, but on the Galaxy A51, the noticeable lag is a bit not up to the mark. Samsung’s own Galaxy M31 that costs Rs. 12,999 packs the same SoC. The pricing of the Galaxy A51 could have been competitive and considering this is positioned as a mid-range smartphone, Samsung could have packed in a powerful processor.

But having said that, there are a set of users who might like the other good aspects of the Galaxy A51 and it caters to them, and overall, it turns out to be a decent mid-range smartphone from Samsung.