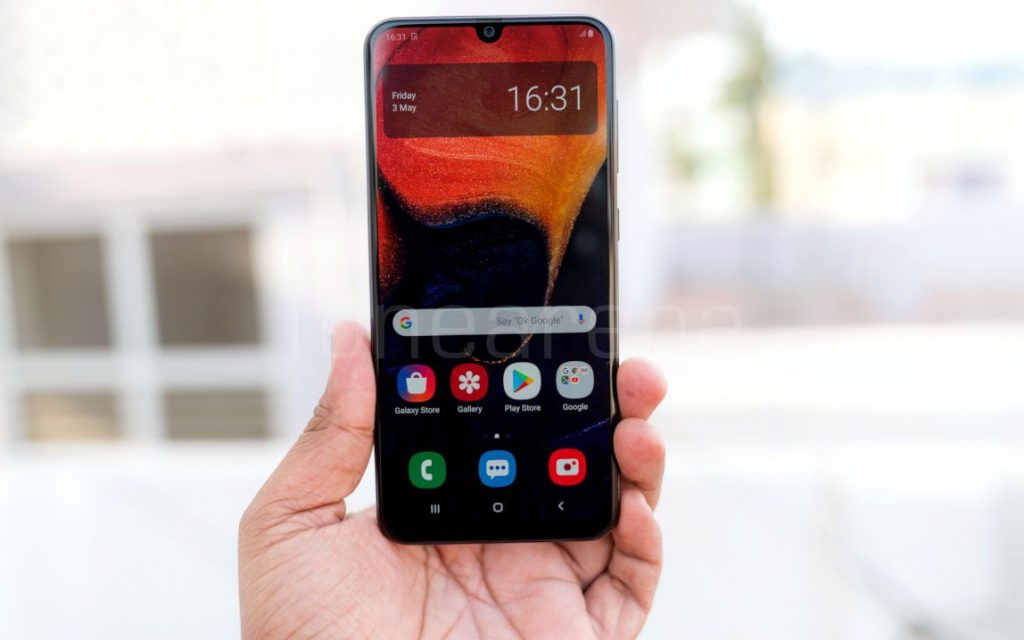 In the ever changing Indian smartphone market, the South Korean tech giant Samsung learnt its lesson, recouped itself, and here they are with some amazing smartphones (Galaxy M series, Galaxy A series) posing a direct threat to the likes of Xiaomi, Realme, Vivo, HONOR and OPPO.

Samsung overhauled its smartphone strategy at the mid-range price point in order to appeal more to millennials by bringing in cutting-edge features. As promised the company launched Galaxy A50 with an in-display fingerprint scanner, triple rear cameras and a huge battery.

We’ve used the Galaxy A50 for sometime and come up with a reason on why you should and should not buy it.

Why you should buy Samsung Galaxy A50!

Bestowed with the superior display! 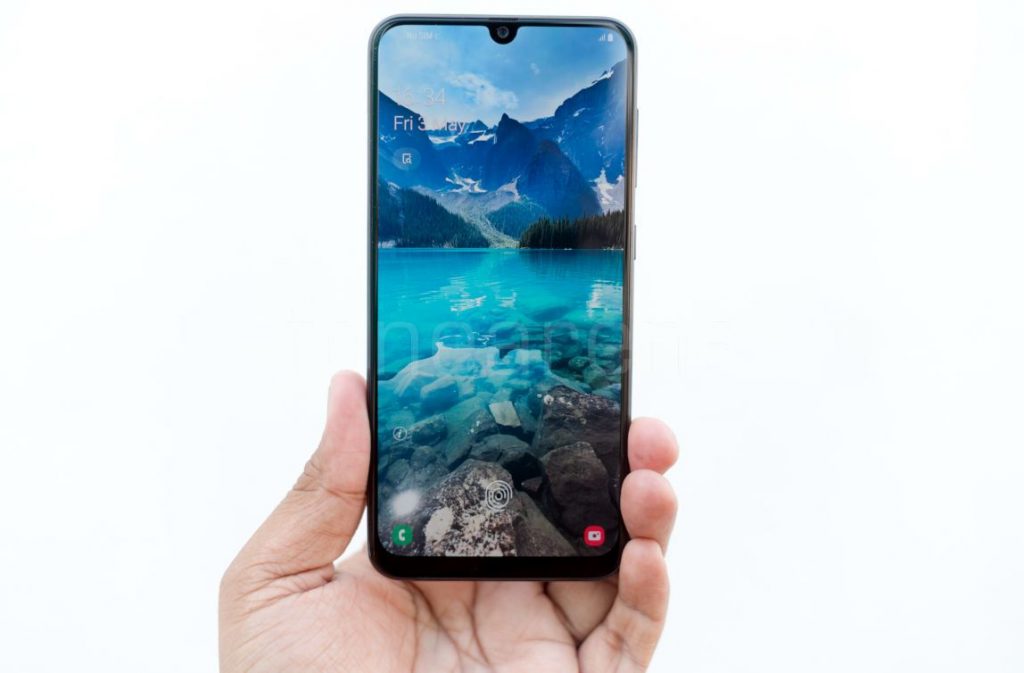 The Galaxy A50 sports a 6.4-inch (2340 x 1080 pixels) Full HD+ Infinity-U Super AMOLED display translating into a pixel density of 404 ppi. Galaxy A50 sports one of the best displays to consume content on, in this price segment and offers a screen-to-body ratio of about 85%. The black levels are deep, and watching media, especially high-resolution content from the likes of Netflix is a pleasure.

Having said that, before binge-watching Netflix, make sure you’ve set the right screen mode. It comes with options Adaptive display, AMOLED Cinema, AMOLED photo and Basic. Furthermore, the colour reproduction is good with the right amount of saturation and contrast. The viewing angles are good, has a perfectly readable display under bright sunlight too. It’s worth mentioning that it supports Widevine L1, so Netflix HD content in A50 display is awesome. The Infinity-U display as the company calls it is least intrusive when consuming content. 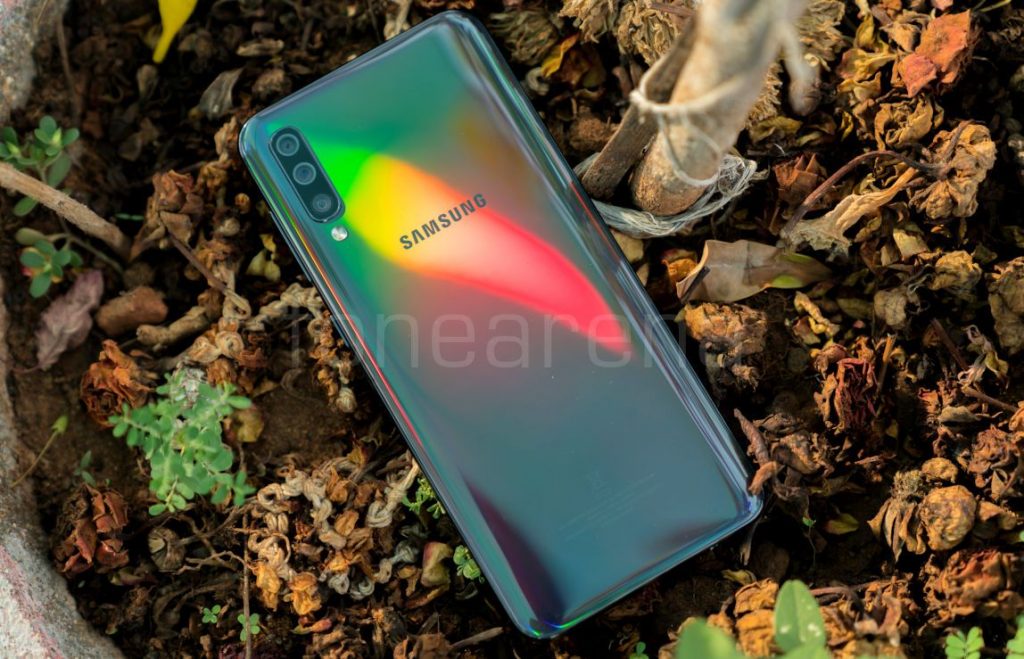 The first thing you notice when you pick up the device is its sleek and lean physique. Second is its rear panel, which has a reflective coating that scatters light through the plastic panel and makes for some beautiful hues. Since it’s a fingerprint magnet, slapping a cover on it is recommended to get rid of smudges. It’s worth mentioning that, Samsung provides a silicone case in-the-box. Talking about the dimension, it measures 7.7mm in thickness and weighs around 166grams.

Since it’s made out of glasstic body, it lacks that premium feel, but this is way better than the plastic body on Galaxy M Series. All said and done, the build quality of the A50 looks solid, feels light in hand and pocket. 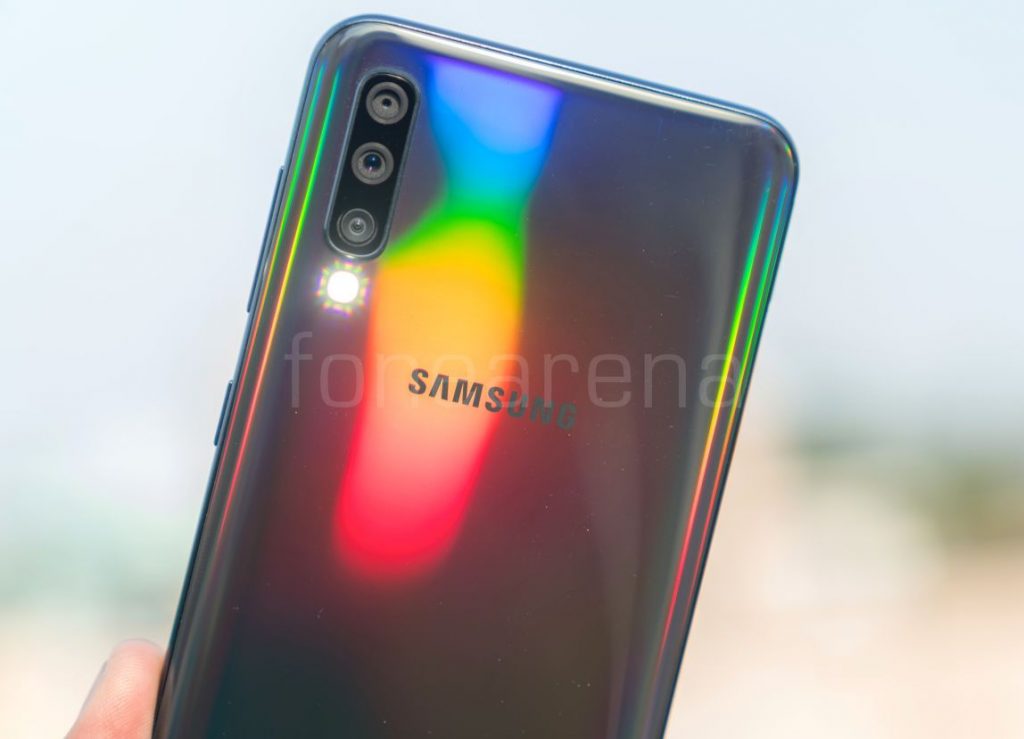 The Samsung Galaxy A50 employs a triple camera setup stacked vertically. In terms of specifications, it has a 25-megapixel camera with f/1.7 aperture, 5-megapixel Depth sensor for Live Focus and an 8-megapixel Ultra Wide lens. The front side of the device equips the 25MP front camera with f/2.0 aperture.

In our testing, the Galaxy A50 took a pretty good picture under daylight/well-lit conditions. It never failed to capture the details with true to the nature colours. The images taken in HDR mode is better with improved contrast and saturation. The portrait shots are decent with good edge-detection. Instead of differentiating itself among the crowd, the Galaxy A50 fails in low light conditions just like any other mid-range with noise and negligible details. 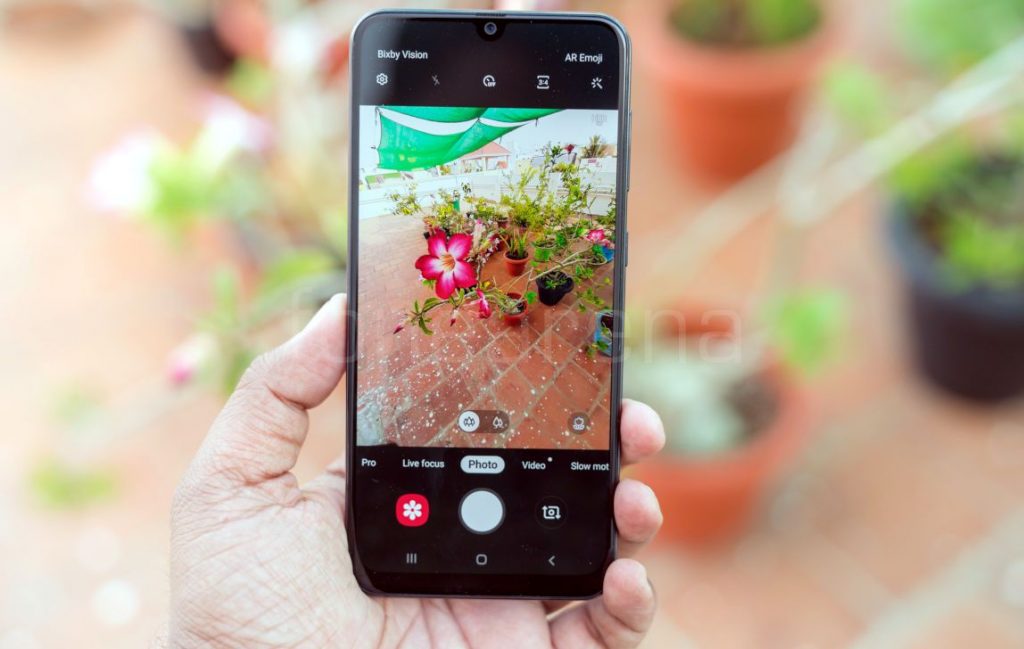 The 8MP Ultra Wide lens does its job very well since it fits much more in a single frame using its 123 ̊ field-of-view. Kudos to Samsung for opting wide-angle instead of Telephoto, but the resolution of the camera could have been better. The 25MP front camera offers good selfies and has the potential to pull off Instagram worthy shots as well.

Video quality is good, but it only has 1080p video recording, and lacks 4K recording, even though Exynos 9610 SoC supports it. 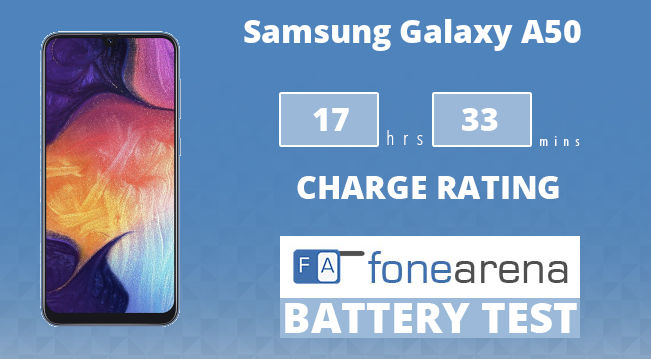 The Samsung Galaxy A50 is powered by a huge 4000mAh battery with fast charging technology. The gigantic battery that sits inside the device is plenty for a full day’s casual usage and just perfect for heavy usage. So on the whole, in our experience, the Samsung Galaxy A50 battery backup is trustable.

The Samsung Galaxy comes in Black, White, Blue, Coral colours and carries a starting retail price of Rs. 19,990. After a long time, it seems Samsung has learnt its lesson on the pricing strategy with the Galaxy M series. The company is carrying forward the same strategy to the Galaxy A series as well. At this price, it not only has solid build quality but a crisp display, long-lasting battery life and a decent camera. This device is not just a decent one but a good Samsung mid-ranger.

Why you should not buy Samsung Galaxy A50! 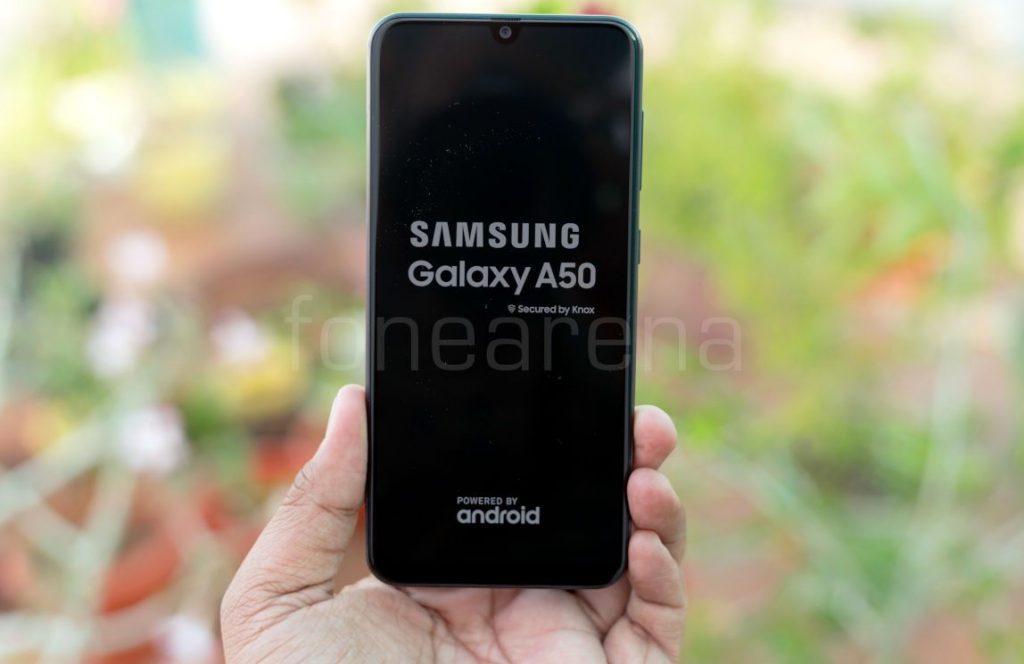 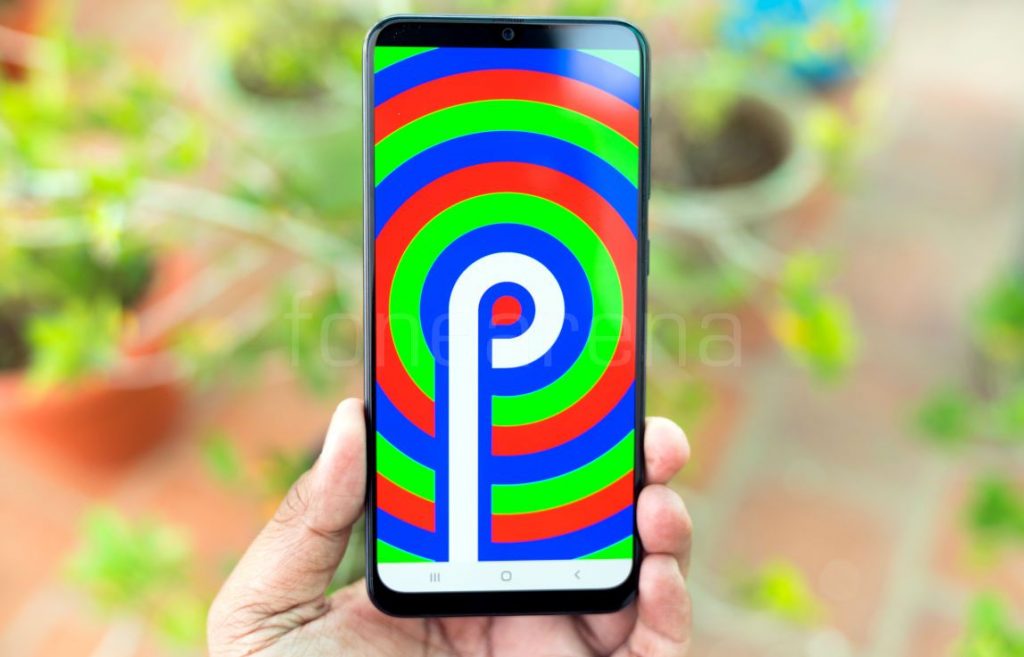 The recent Samsung devices including Galaxy A50 is shipped with the company’s new interface, the OneUI, based on Android 9.0 Pie. The UI looks refined, minimal yet sluggish most of the times as well. The general animations while operating the mobile turns out to be meh. In addition to it, there were lags during multi-tasking and heavy app usages including Google Maps. For instance, during receiving or making the call, the caller ID appears on the screen after a brief pause for 4 to 5 seconds. This sluggishness repeated itself various times in several instances. Gaming experience was decent, but it is not the best compared to other Snapdragon-powered phones in the range.

At the time of writing this review, we got a new update including April Security Patch and other bug fixes. Well, this is an indication that Samsung is working on refining the OneUI and continues to irk out general issues regularly. Once Samsung rectifies it, this device is going to be smooth as butter to use. Check out the synthetic benchmark scores below. 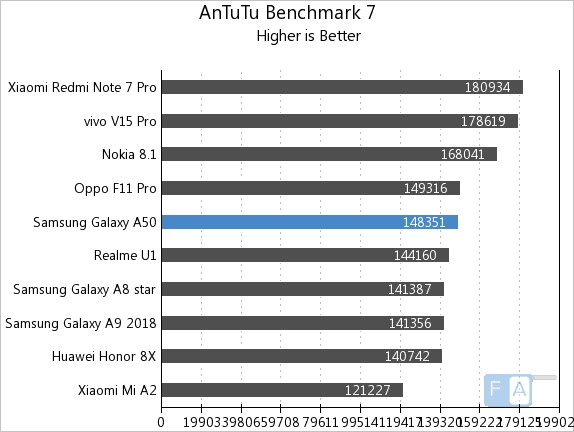 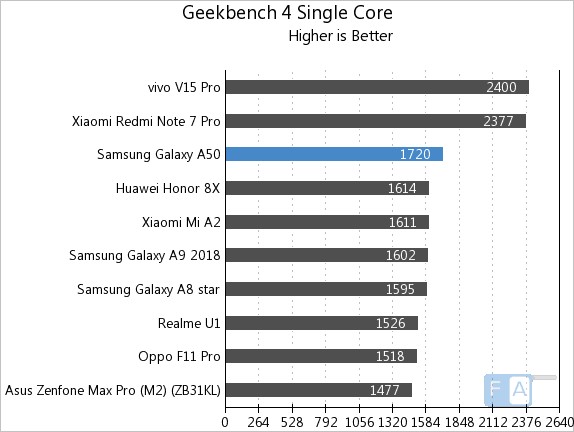 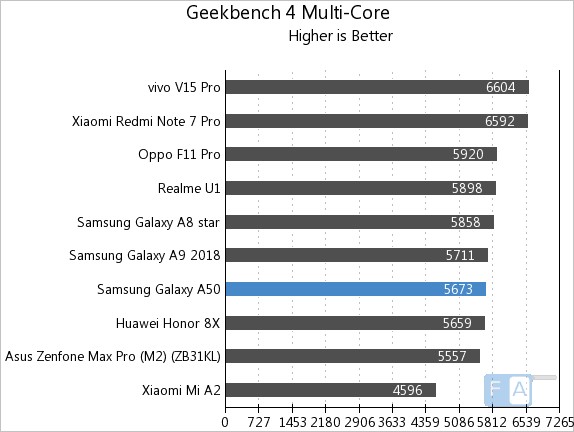 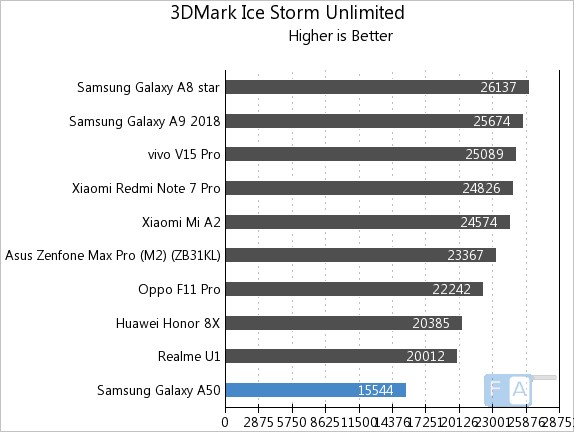