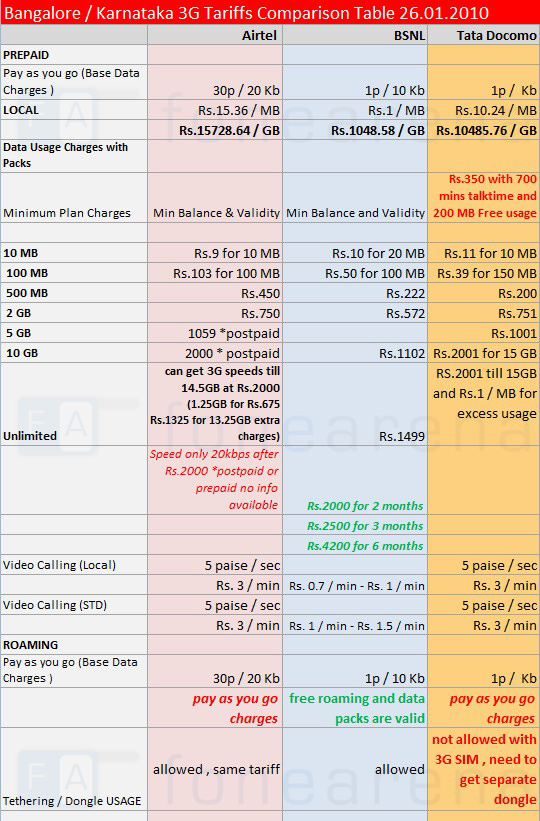 We decided to compare the 3G Tariffs from Airtel , BSNL and Tata Docomo in the Bangalore,  Karnataka Circle. This circle was chosen because it is the only circle maximum Operators are offering 3G as of today.

Reliance was not included because it has launched 3G in this circle.This comparison only takes into account the Prepaid tariffs and our main focus is on the Data Usage charges. We have included Video Calling charges too. We have omitted the basic cost such as the SIM procurement charges.

While we have paid lot of attention to the numbers in this comparison , feel free to let us know in case you find any mistake.

Base Data charges without any Packs( Pay as You Go )

BSNL is the most affordable with charges of 1paise per 10 Kb while Airtel charges 30p per 20 Kb.

While both Airtel and BSNL require only basic validity and talktime , Tata Docomo requires that you choose Rs.350 plan with free talktime before subscribing to Data Packs.

BSNL offers unlimited Data at Rs.1499 per month. You can get it for Rs.700 per month with 6 months advance payment.

( It’s been confirmed by Airtel that maximum charges are Rs.2000 under the Flexi Shield plan)

Find the Sheet comparing the 3G tariffs below